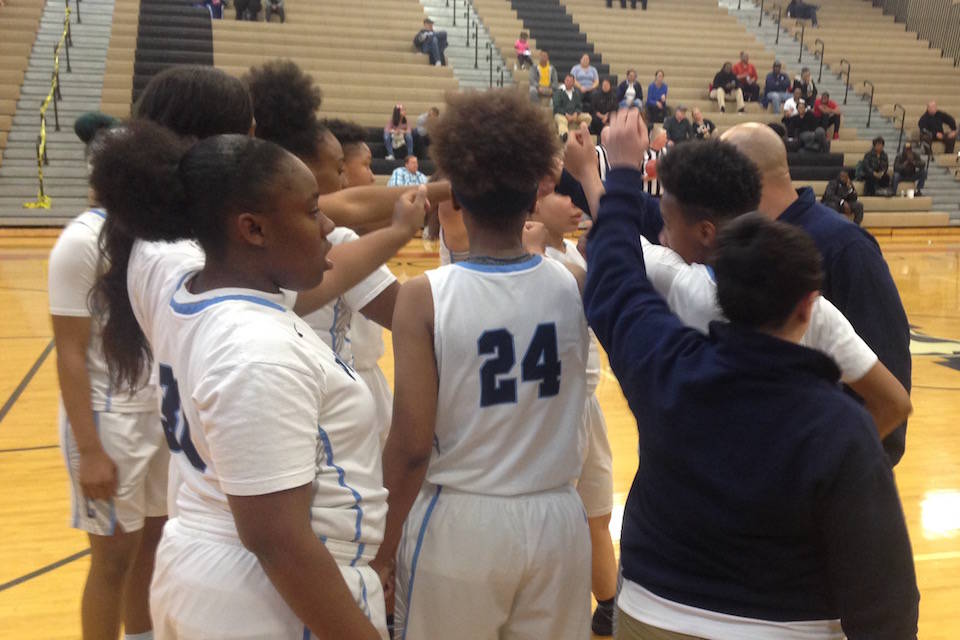 Canyon Springs players gather during a timeout in their 66-43 win over Faith Lutheran on Tuesday, February 19 at Legacy. (Bartt Davis/Las Vegas Review-Journal)

When Canyon Springs junior Sydnei Collier took a seat late in the first quarter Tuesday, she told coach Chris Walker to just keep her on the bench.

Collier scored all of her 14 points in the first three quarters and helped Canyon Springs earn a berth in the Mountain Region final with a 66-43 win over Faith Lutheran at Legacy.

“I realized that I had to do my part to help the team,” Collier said.

The Pioneers (25-3) face Centennial (27-1) in the Mountain final at 5 p.m. Thursday at Legacy. Regardless of the outcome, Canyon Springs will make its first trip to the Class 4A state tournament.

“It feels great to be a part of this,” Collier said. “People doubted us, but we just showed what we can do.”

Collier was just 2-for-7 from the field when Walker sent J’hane Richardson in as a replacement with 1:11 left in the first quarter. Collier returned to start the second quarter and finished the first half with 10 points, helping the Pioneers to a 26-15 lead.

“Our game plan was to take it to the basket, and she just kept shooting,” Walker said. “We just told her that we weren’t mad at her, but we needed to get to the basket and follow the game plan. She realized that she would start to get more open looks.

“She was frustrated, and it’s OK to be frustrated. She’s a talented player.”

Her spin move and finish 30 seconds into the third quarter started an 11-4 run that removed any doubt.

The Pioneers forced 21 turnovers in the game and held Faith Lutheran to just 14 of 44 from the field (31.8 percent).

“We just switched our defenses every couple of possessions,” Walker said.

Centennial 77, Shadow Ridge 20 — Veteran Centennial coach Karen Weitz was not pleased with her team’s first half.

And allowed only three more points the rest of the way.

A much improved second-half effort allowed the Bulldogs to coast into Thursday’s final.

“We come out with no sense of urgency, and our attention to detail to everything we do in practice just seems to go by the wayside,” Weitz said. “No matter who we are playing, I expect to see that same intensity from practice carried out onto the court every game.”

Taylor Bigby scored all 19 of her points in the first three quarters for Centennial, ranked No. 5 nationally by USA Today.

The Bulldogs held Shadow Ridge (21-7) to 1-for-17 shooting in the final three quarters and forced 39 turnovers in the game.

“I keep telling them they’d better be careful and pick up their intensity,” Weitz said. “I take everybody seriously, and they should too.”