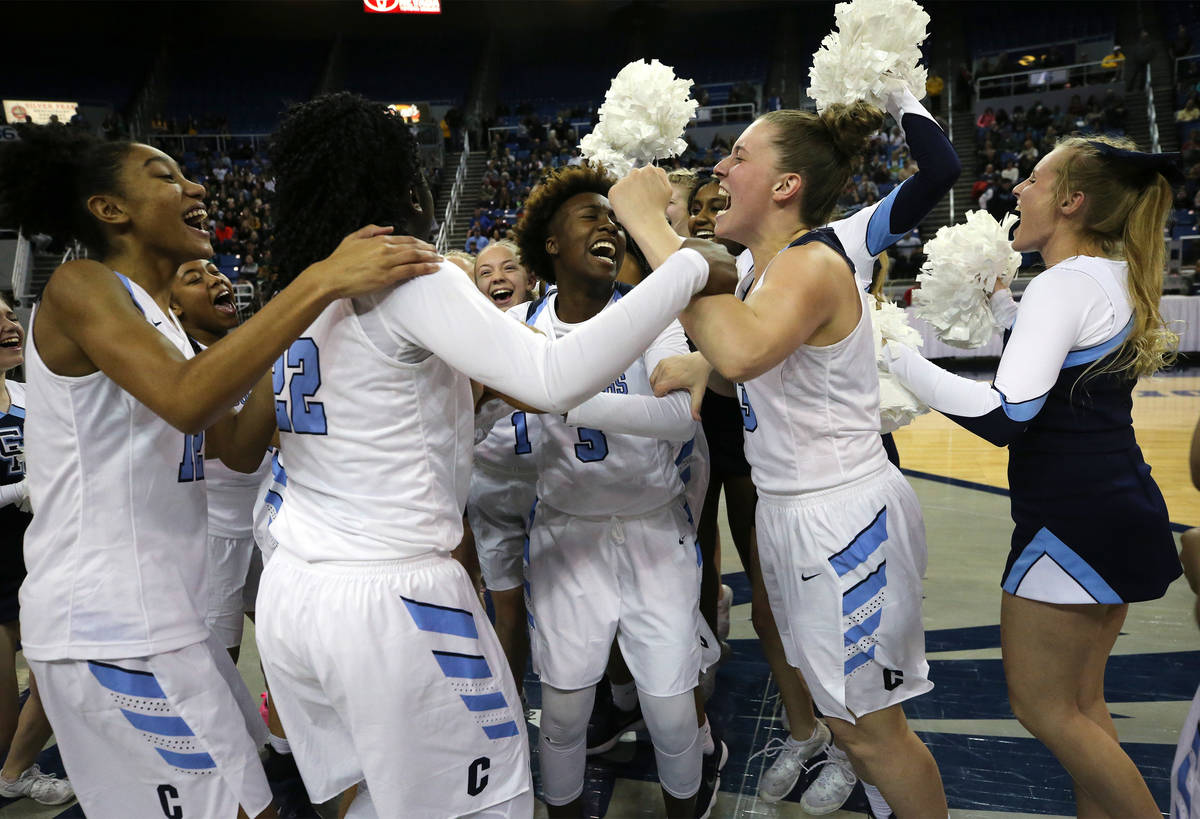 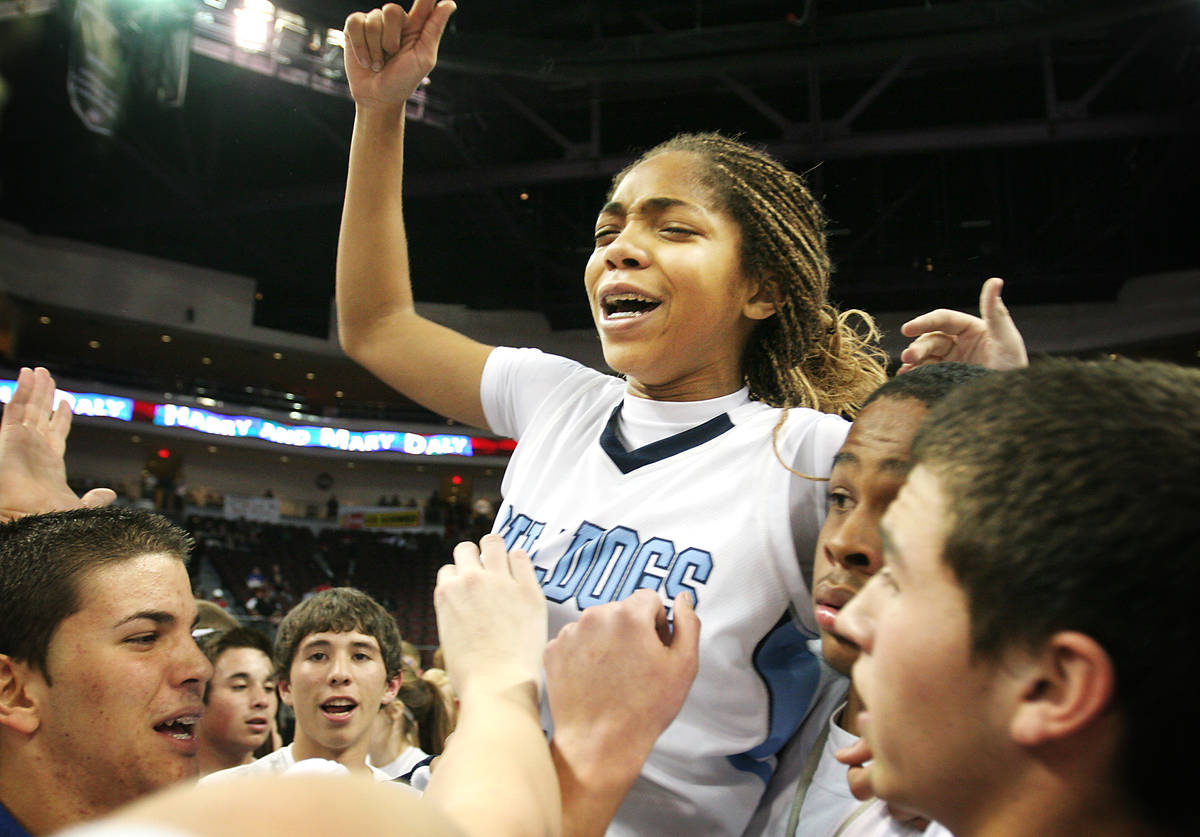 Centennial's Alexis Byrd celebrates on center court moments after hitting both her free throws with 0.05 seconds left on the clock to beat Bishop Gorman by the score of 59-58 to win the Nevada 4A Girls State Basketball Championships at the Orleans Arena in Las Vegas on Feb. 27, 2009. Jason Bean/Las Vegas Review-Journal 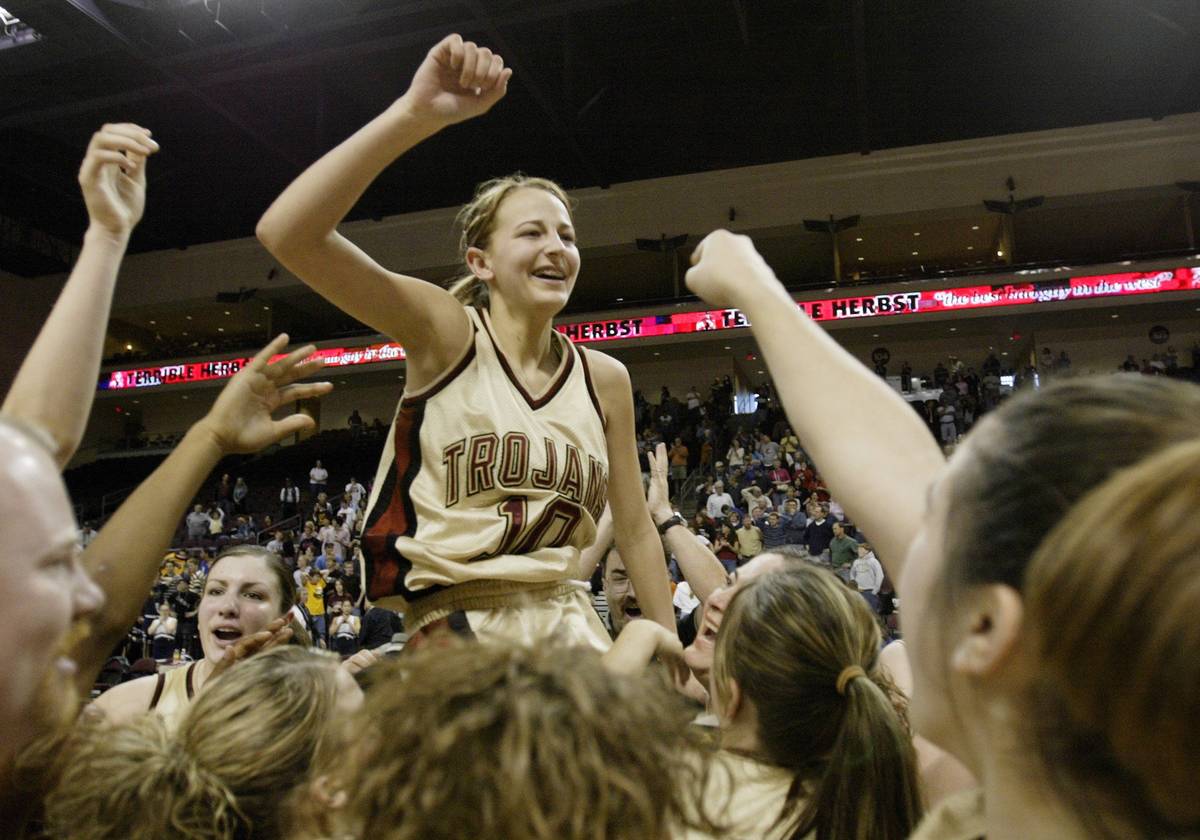 Pahrump Vally girls lift up Melanie Maeder #10 after she hit a three-pointer at the buzzer to win the state championship 55-53 at the Orleans Arena in Las Vegas on Saturday Feb. 26, 2005 (AP Photo by Isaac Brekken) 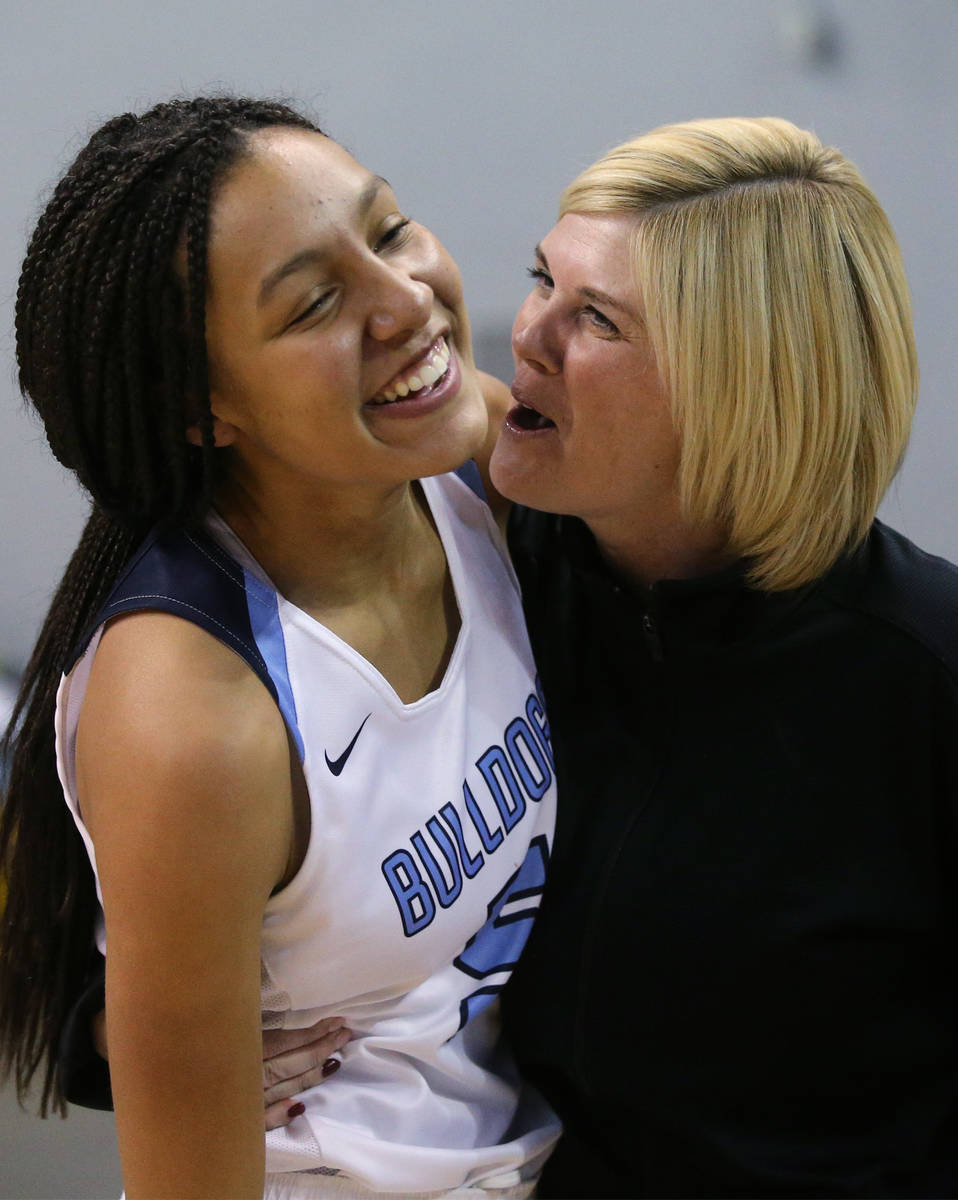 Centennial's Jade Thomas celebrates with an assistant coach after her shot at the buzzer forced the title game against Liberty into overtime at the NIAA state basketball tournament in Reno, Nev., on Friday, Feb. 23, 2018. Centennial won 74-65 in OT. Cathleen Allison/Las Vegas Review-Journal 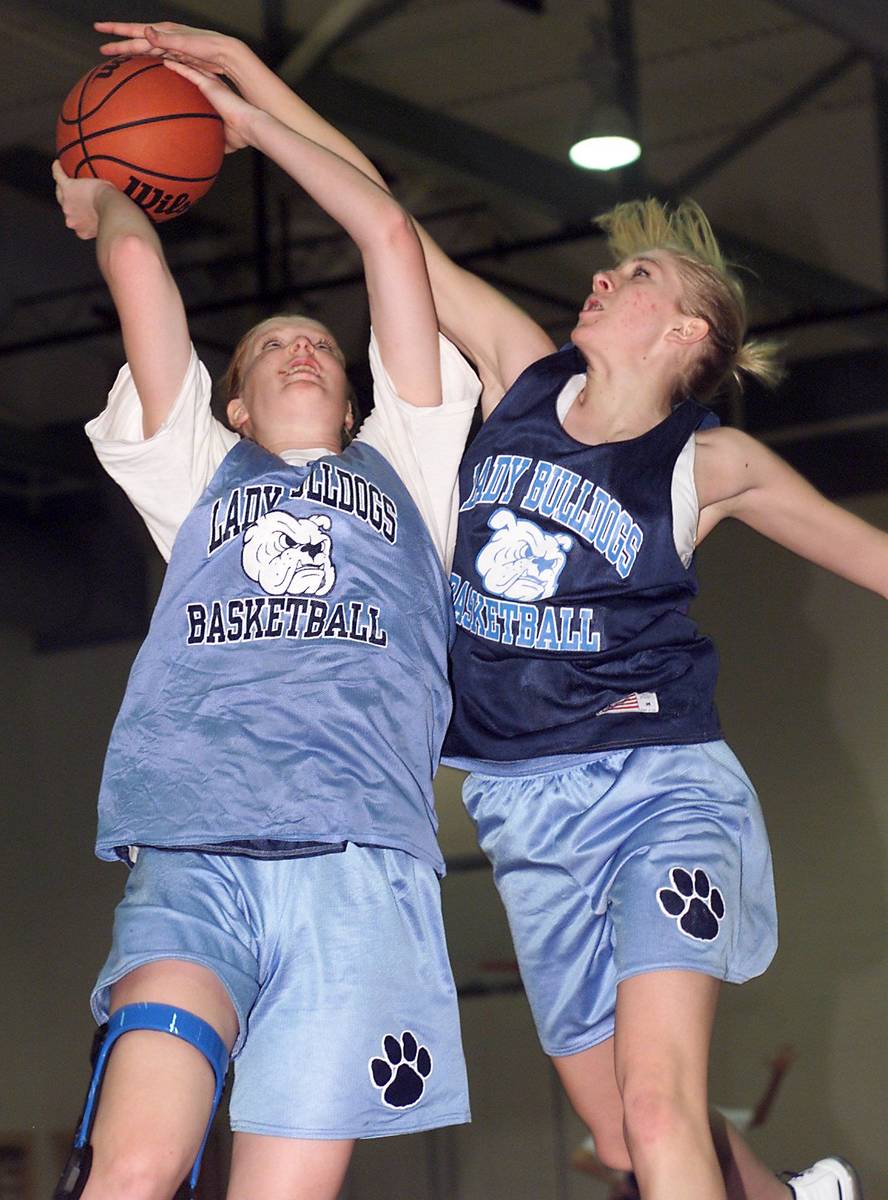 Centennial High School center Heather Thorson, left, goes up for a shot against forward/guard Darci Sandoval during practice at the school Wednesday, Jan. 12, 2000. Despite not having any seniors and only seven players on the roster the Lady Bulldogs are undefeated this season. RJ Photo by K.M. Cannon

Seventh in a series: The top five high school state girls basketball championship games from the 2000s, as selected by the Review-Journal staff. Monday: Boys basketball.

“I knew I was going to make my free throws and win a state championship,” Byrd said.

Chelsie Pitt’s basket with 20.3 seconds left gave Gorman a 58-57 lead, and Centennial grabbed two offensive rebounds before finding Byrd on the right side. She drove near the baseline and drew contact before her shot went in, but officials waved off the basket and called a blocking foul on Gorman before the shot.

Centennial was in the double bonus, and Byrd went to the line.

“We couldn’t have asked for a better person to be on the line,” Centennial coach Karen Weitz said.

Sam Caruth poured in 28 points as the Crusaders broke a seven-game losing streak against the Grizzlies in a rematch of the 2015 final.

Caruth’s sixth 3-pointer gave Faith Lutheran the lead for good 43-42 with two minutes remaining. She went 4-for-4 from the line in the final 49.6 seconds.

Essence Booker had 17 points and 15 rebounds for Spring Valley, which rallied from a 27-15 halftime deficit but shot 14-for-52 against the Crusaders’ man-to-man defense.

“I haven’t cried in a long time,” Faith Lutheran coach Jennifer Karner said. “I had some tears of joy today.”

Hopkins, who had 27 points, was double-teamed on the right side before bringing the ball back out and finding Maeder open on the left side. Maeder had missed a potential winning 10-footer at the regulation buzzer.

“My heart dropped,” Hopkins said. “And then when she made it, oh, I can’t even explain it. It’s the best feeling I’ve ever had.”

Jade Thomas drained a game-tying 3-pointer at the regulation buzzer as the Bulldogs erased a 15-point fourth-quarter deficit to top the Patriots in overtime.

Senior Justice Ethridge scored 14 points in the fourth quarter but fouled out with seven seconds left. Thomas, a sophomore, buried a shot from the right corner just before the horn sounded to tie the game 61-61.

“I was crying,” Ethridge said. “There’s no way we were going to let them beat us.”

Centennial’s depth took over in overtime, as three players from each team fouled out.

“We’ve been trained to come up from bad falls,” Thomas said.

Darci Sandoval scored 21 points as the Bulldogs capped a perfect season with a double-overtime win over the Tigers, breaking Northern Nevada’s 21-year stranglehold on the large-school championship.

Centennial led 68-65 after Jenene James made two free throws with eight seconds left in the first overtime, but Douglas’ Andrea Honer hit a 3-pointer as the buzzer sounded to force a second overtime.

Already without two starters who had fouled out, Centennial (34-0) took a 76-74 lead when Karissa Fernandez made one of two free throws with 14 seconds left.

A desperation 3-pointer by Douglas’ Tarrah Kizer at the buzzer missed, and the Bulldogs became the first Southern Nevada team to win the state’s large-school title since Chaparral in 1980.

“I guess that’s what a state championship game is supposed to be like,” Centennial’s Weitz said.