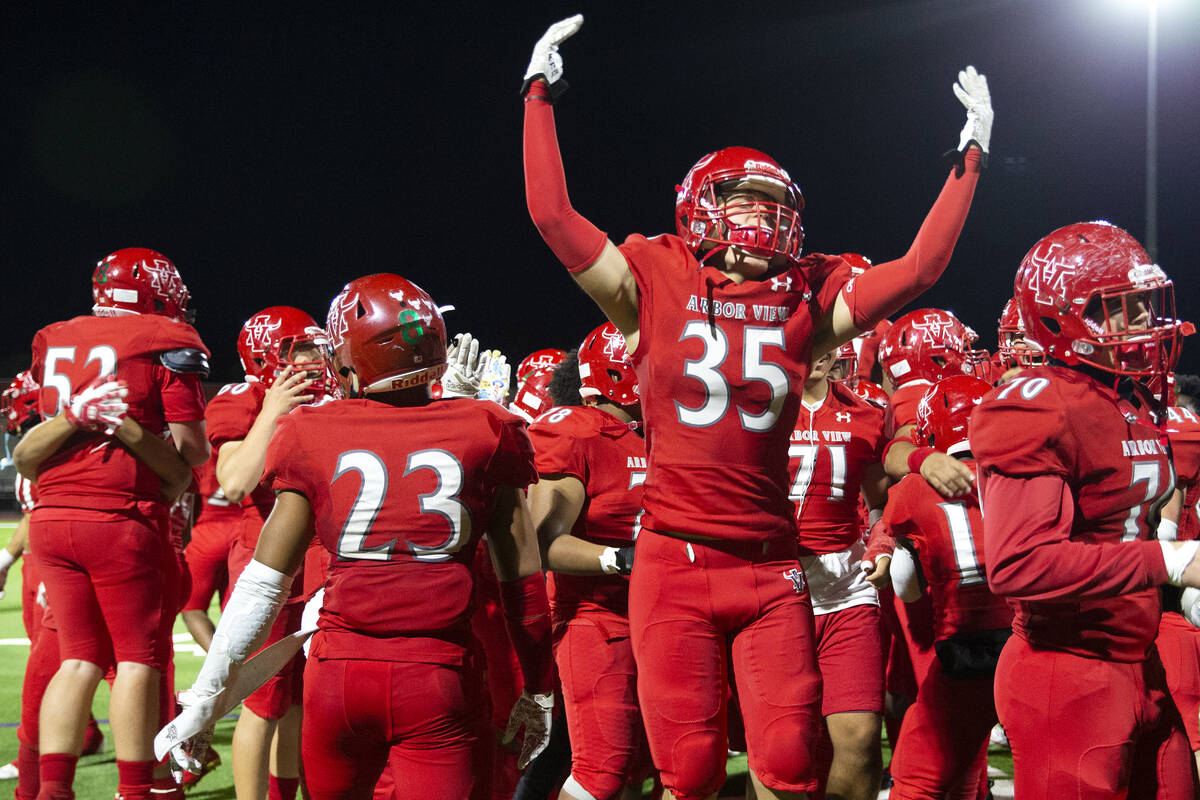 With the new Class 5A alignment and a football playoff format that guaranteed a state championship game participant from Northern and Southern Nevada, it set up a potential state semifinal matchup between Bishop Gorman and Liberty every year.

The only question was, can anybody in Southern Nevada keep that from happening.

This season, Arbor View and Foothill are the only teams still in the way. Liberty hosts Arbor View, while Gorman welcomes Foothill in the 5A Southern Region semifinals at 6 p.m. Friday.

“As a program and a player, you’re always trying to get better,” Arbor View coach Matt Gerber said. “The only way to do that is to play the best. You hope you’ve moved beyond a certain level, but you don’t know until you play (Gorman or Liberty).”

Arbor View and Foothill have had a first-hand look at the challenge they face this season. Arbor View opened with a road game against Liberty, a 42-14 loss.

Both teams have changed drastically since then, in part because of the Nevada Interscholastic Activities Association’s rule for this season that allowed players to gain eligibility after the first three weeks of the school year, but also because of improvement teams make throughout the season.

Liberty coach Rich Muraco said despite the differences in the teams from the first meeting, that game film is still valuable.

“You look at some things, like how they lined up to what we did schematically to our formations,” Muraco said. “Then you guess as you watch their other films what they’re going to do this time. That’s part of the chess match of football that makes it fun to coach.”

The situation is entirely different for Gorman and Foothill. After all, their last meeting was only two weeks ago, with Gorman taking a 59-0 win to claim the Desert League championship and run its shutout streak to five.

“We learned Gorman is very good. We knew they’re an elite, nationally ranked program,” Foothill coach Vernon Brown said. “We have to make a few adjustments and see if we can play up to their speed. You hear all the time, ‘Gorman this, Gorman that,’ and they’re a great team. But we can’t listen to that. We just have to step up and play to the best of our ability and see what happens.”

Brown said having seen the Gaels two weeks ago can work in one of two ways. The Falcons can be beaten down mentally and have already lost before they get on the field, or they can embrace the challenge and play fast and loose with nothing to lose.

Having beaten Green Valley 27-20 last week guarantees that Foothill’s only losses this season will come to Liberty and Gorman.

“That’s something we can hang our hat on is, with the exception of Liberty and Gorman, we beat everybody we played,” Brown said. “Losing to the No. 1 and 2 teams in the state is nothing to be ashamed of.”

Despite being on the winning end of the lopsided score, Gorman coach Brent Browner isn’t taking anything for granted. Neither Browner nor Muraco is allowing his team to look past its opponent this week with a potential Gorman-Liberty showdown looming next week.

“We always tell the guys it’s hard to beat a team twice,” Browner said. “Next week is not guaranteed, and this could be the last some of them put on a helmet. You can’t look forward to something you don’t have. If we come out and play to the best of our ability and do what we’re supposed to do, then we’ll get another game.”