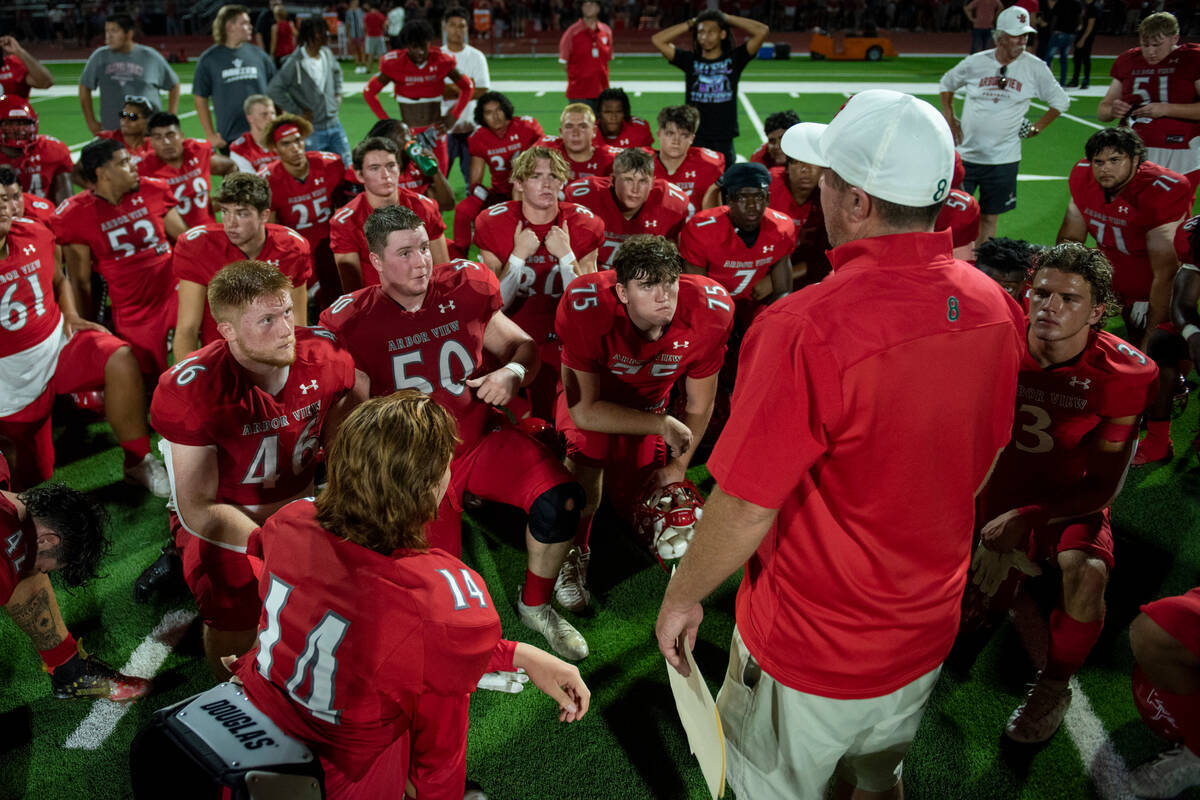 Points were at a premium for Arbor View in last week’s season opener. But that wasn’t the case Friday night against Shadow Ridge.

Junior running back Makhai Donaldson rushed for 112 yards on 11 carries with three touchdowns as the host Aggies rolled past the Mustangs 38-6.

“You normally improve a whole lot from your first game to your second game,” Arbor View coach Matt Gerber said. “We showed that tonight, especially in the running aspect, we got our receivers involved.”

Gerber liked how his team set the tone offensively and said all aspects of its game was clicking after making too many mistakes in the opener.

The Aggies (2-0) marched down the field on their first drive in less than two minutes, capped by Donaldson’s 20-yard touchdown run.

Senior linebacker Kade DeSantis helped the Arbor View offense, recovering two fumbles that the Aggies turned into a 23-yard TD run from Donaldson and 29-yard field goal for a 17-0 lead.

The Aggies’ defense forced two more first-half turnovers, a strip sack from senior linebacker Toa Howard that he returned 34 yards for a touchdown and an interception by senior safety Tanner Aitken.

The Mustangs (1-1) were limited to 47 yards in the first half and trailed 31-0. Gerber said he was impressed with his team’s ability to hold the Mustangs’ offense in check. He was also pleased with how his defense made plays to set the tone.

“We have a defense that is going to get a stop,” Gerber said. “They’re going to get the ball back for us with good field position. It means a lot when we get turnovers.”

Shadow Ridge broke through for its first score midway through the third quarter when junior quarterback Coen Nicholas Coloma scored on an 11-yard run.

Aitken then returned the ensuing kickoff to the Shadow Ridge 35-yard line, and Donaldson scored on a 20-yard run.

“It makes the offense very dynamic,” Gerber said of Donaldson’s impact. “He’s a kid who can break out a big run at any time, and that brings more bodies on the defense inside. It helps create the balance we need on offense.”

Coloma finished 6 of 14 for 112 passing yards and 53 rushing yards on 12 carries. Senior running back JaQuieze Holland rushed for 63 yards on 19 carries.