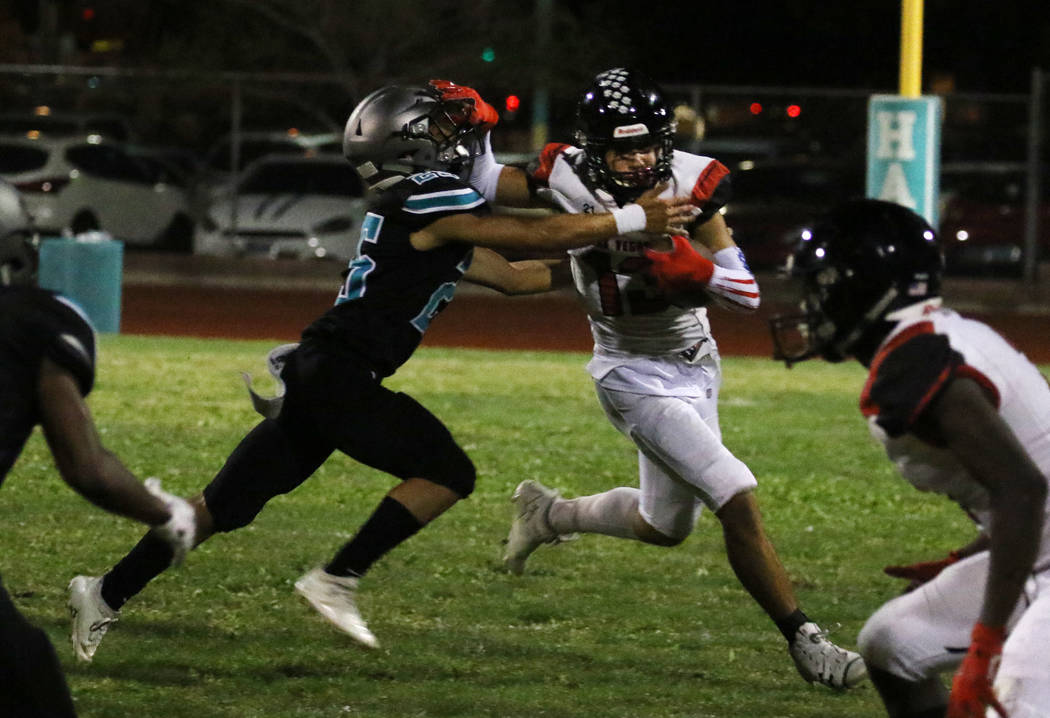 De’Andre Washington rushed for 62 yards and a touchdown on 11 carries, but Arbor View suffered a 41-7 loss to Hamilton on Friday night in Chandler, Arizona.

“This was a rough game,” Arbor View coach Matt Gerber said. “We got beat up pretty bad. We took a step back this week, and we hope to get ourselves better moving forward. This was not an Arbor View performance. (The Huskies) were well coached and did a fantastic job. We’ll continue to get better.”

Pirates quarterback Cameron Reese threw a 13-yard touchdown pass to Steele Skinner midway through the second quarter for the only score of the first half. Skinner also ran 16 times for 60 yards.

Redd added touchdown runs of 10 and 5 yards to put Moapa Valley (2-1) ahead 21-0 midway through the fourth quarter.

The Gators (2-1) lost starting quarterback Garrett Castro to an injury in the second quarter. Backup Anton Mazzulo threw an 82-yard touchdown pass to Colin Rericich late in the fourth quarter.

Christian Vaughn scored a rushing touchdown for the Diamondbacks (2-1). The Panthers trailed 21-12 at halftime, but pitched a second-half shutout for the second consecutive game. Tyler Quinn sealed the Panthers’ victory with a 70-yard touchdown run.

“We were still a little sloppy after two weeks,” Palo Verde coach Joe Aznarez said. “Our defense really came through and pitched a shutout in the second half. I give big credit to our defensive players and coaches.”

Clark 12, Valley 6 — Sophomore running back D’On Williams went down the left sideline for a 55-yard touchdown late in the third quarter for what proved to be the decisive score.

Chargers defensive end Kameran Cason preserved the win with two sacks, including on fourth down during Valley’s final drive.

Valley running back Jarrett Zibert opened the scoring with a 2-yard touchdown run in the second quarter.

My’Quel Johnson tied the game with a 65-yard scoring strike to Kobe Mosely early in the third quarter.

Dragons quarterback Damani Wilks got loose for a 50-yard touchdown run, but Del Sol (1-2) missed the extra-point try to keep the score 28-27. The Bulldogs then got two sacks to end the Dragons’ final drive.

Delano ran for 85 yards as the Bulldogs led 12-0 early. The Dragons responded with two scores, including a 50-yard scoring pass from Wilks to Vincent Price-Burrell. Jason Abbott then returned the ensuing kickoff 70 yards for another Bulldogs score, putting Virgin Valley ahead 20-14 at halftime.

Smith finished with 125 yards passing and 125 yards rushing on four carries. Jordan Norwood ran for 163 yards and two touchdowns on 14 carries as the Spartans (2-0) jumped to a 35-0 halftime lead. Carrasco also had two interceptions for the Spartans.

Willis completed 15 of 23 passes for 113 yards. Blake had 75 yards rushing and receiving, and Javeion Davison had four catches for 65 yards for the Pioneers (0-2).

The trip to Atlanta to take on Marist (2-0), one of the top programs in Georgia, was an eye-opening experience for the Pioneers, coach Gus McNair said.

“The guys got to experience something very good for them,” he said. “Playing a game like this will help us in the back end.”

Lincoln County 45, West Wendover 6 — At Lincoln County, Cody Zile ran for three touchdowns and threw for another score for the Lynx.

Mason Thornock ran for 105 yards and a touchdown on six carries and added a 45-yard interception return for a score. Hagen Boyce rushed for 139 yards on eight attempts. Zile rushed six times for 89 yards.

Zile opened the scoring early for the Lynx with a 5-yard pass to Kobe Kelley about two minutes into the game. The Lynx jumped on top early with a 32-point first quarter and led 39-0 at halftime.