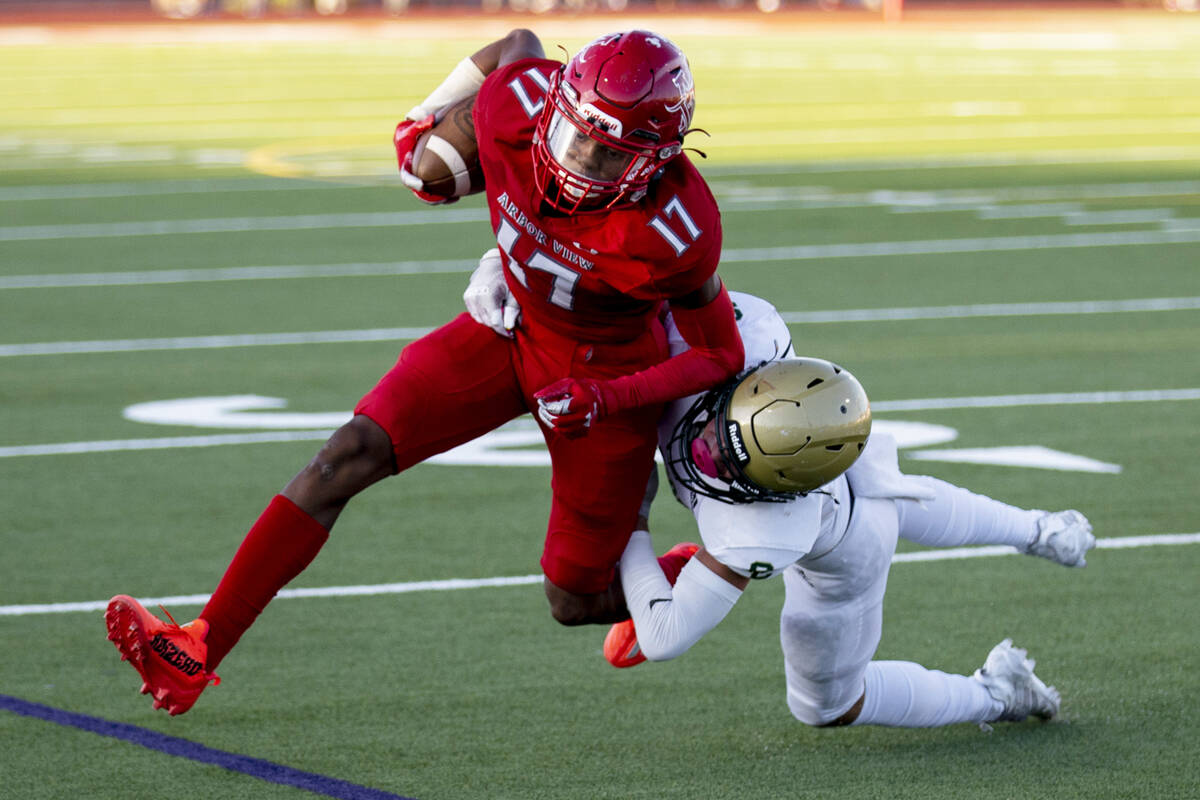 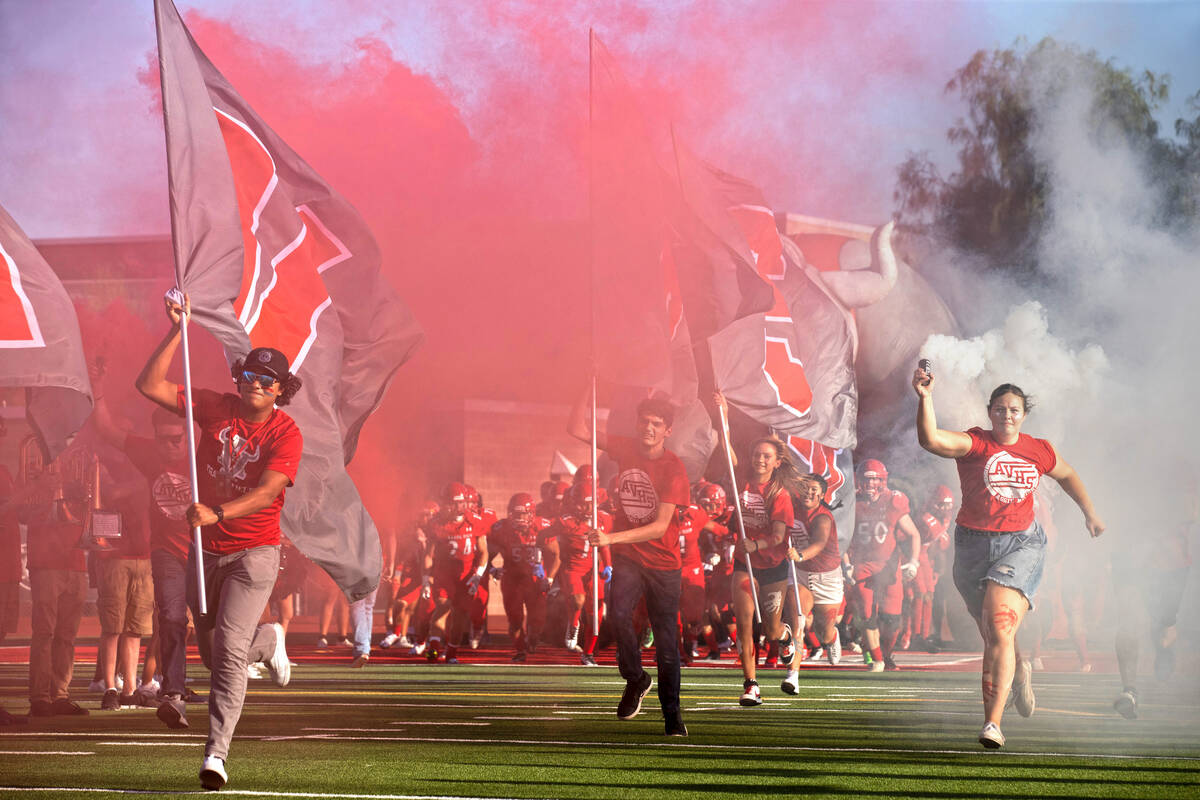 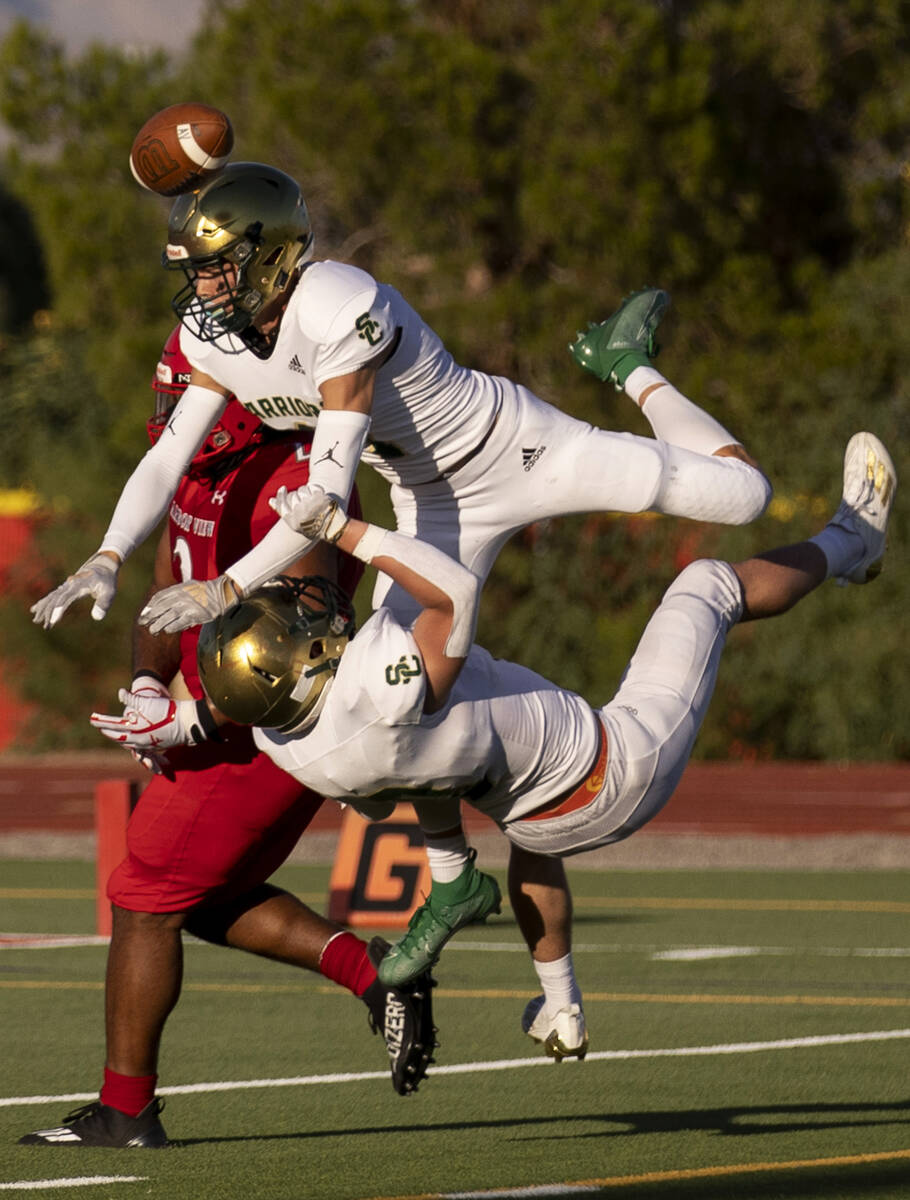 Snow Canyon's Will Warner (1) and Dahrius Romander (0) block a pass to Arbor View's Juice Washington (2) during the first game of the season at Arbor View High School on Friday, Aug. 19, 2022, in Las Vegas. The game was tied 0-0 at halftime. (Steel Brooks/Las Vegas Review-Journal) 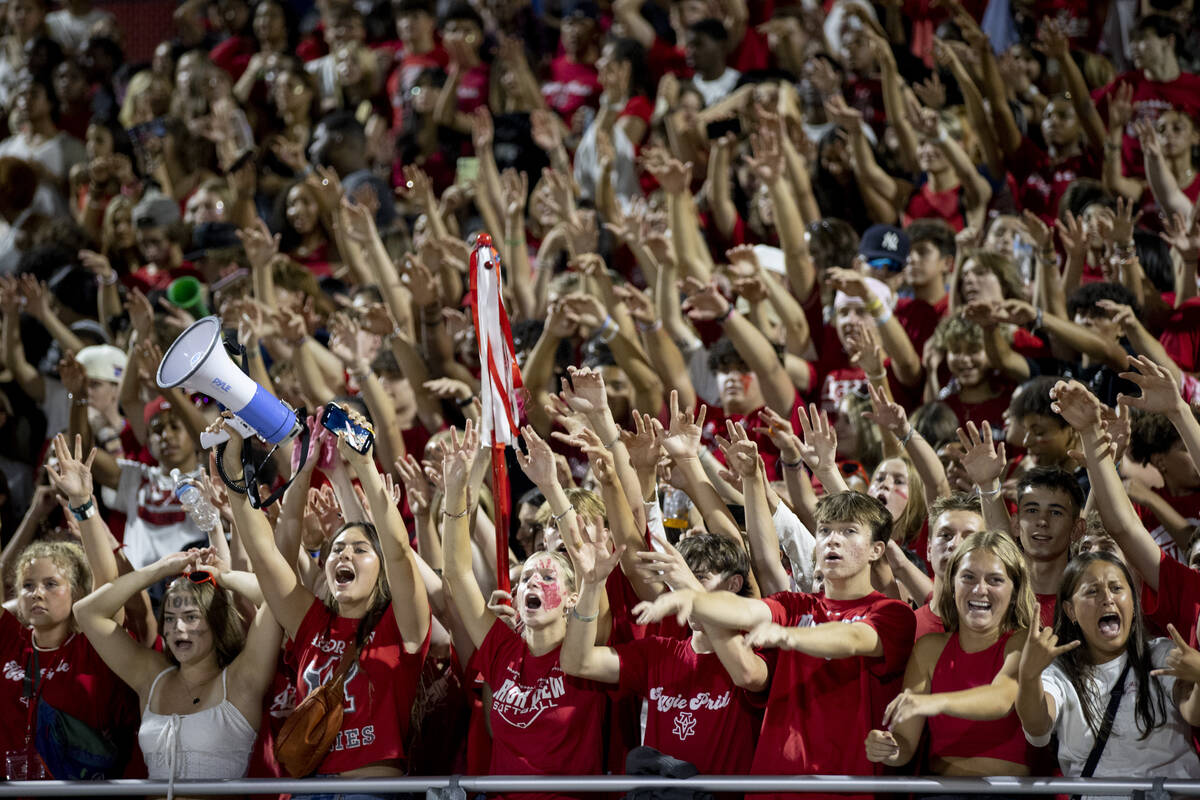 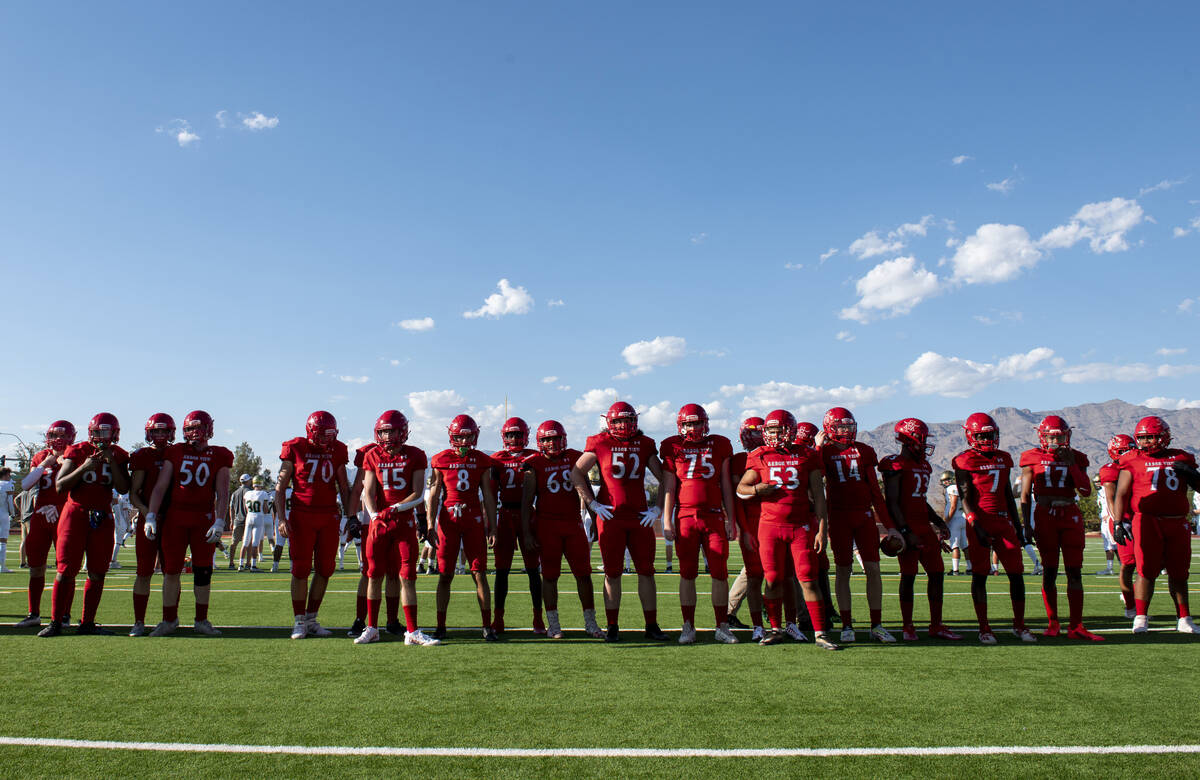 Arbor View High School warms up before their game against Snow Canyon on Friday, Aug. 19, 2022, in Las Vegas. The game was tied 0-0 at halftime. (Steel Brooks/Las Vegas Review-Journal) 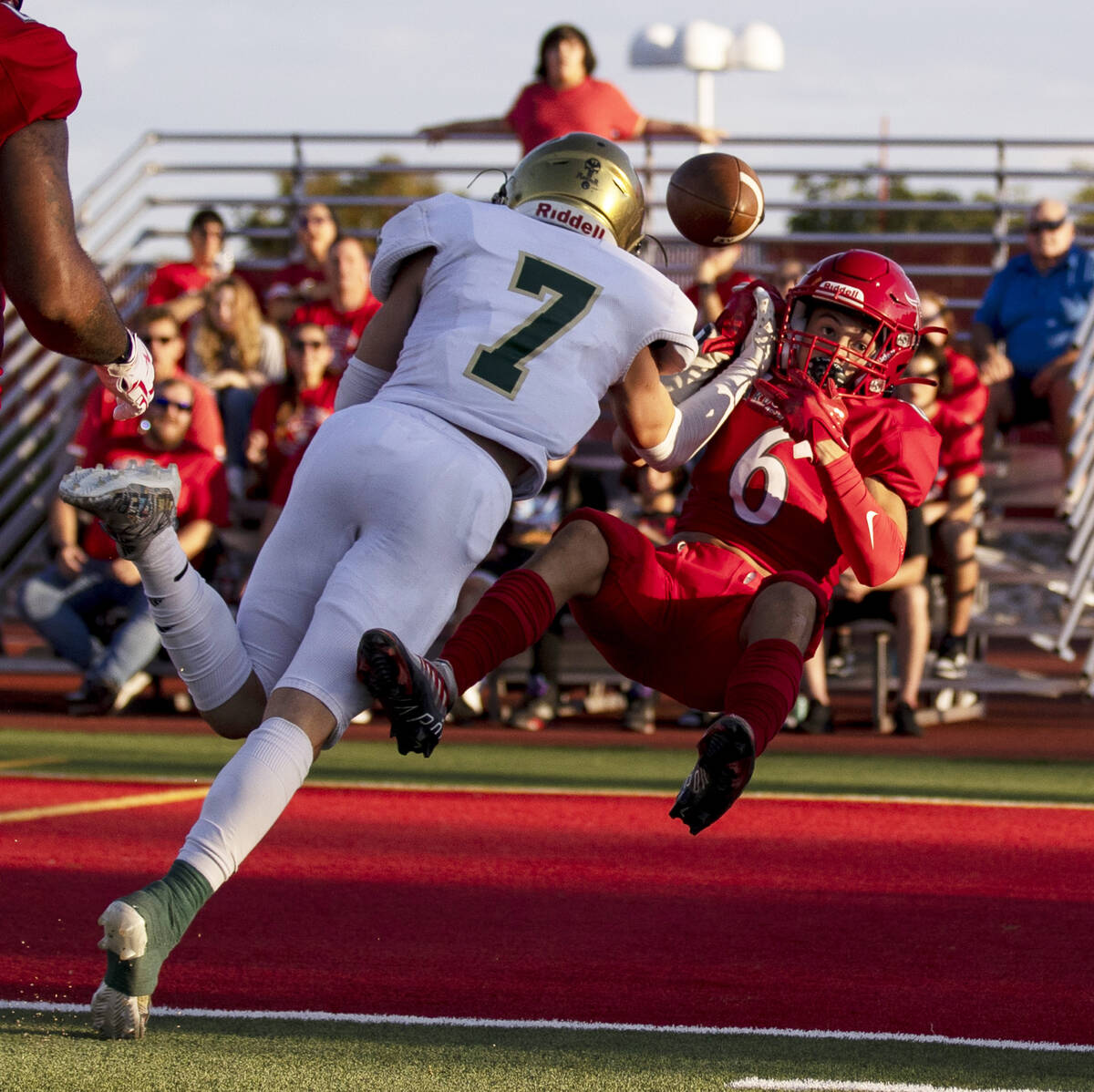 Arbor View's Jayden Williams (6) loses control of the ball as Arbor View hosts Snow Canyon for the first game of the season on Friday, Aug. 19, 2022, in Las Vegas. The game was tied 0-0 at halftime. (Steel Brooks/Las Vegas Review-Journal) 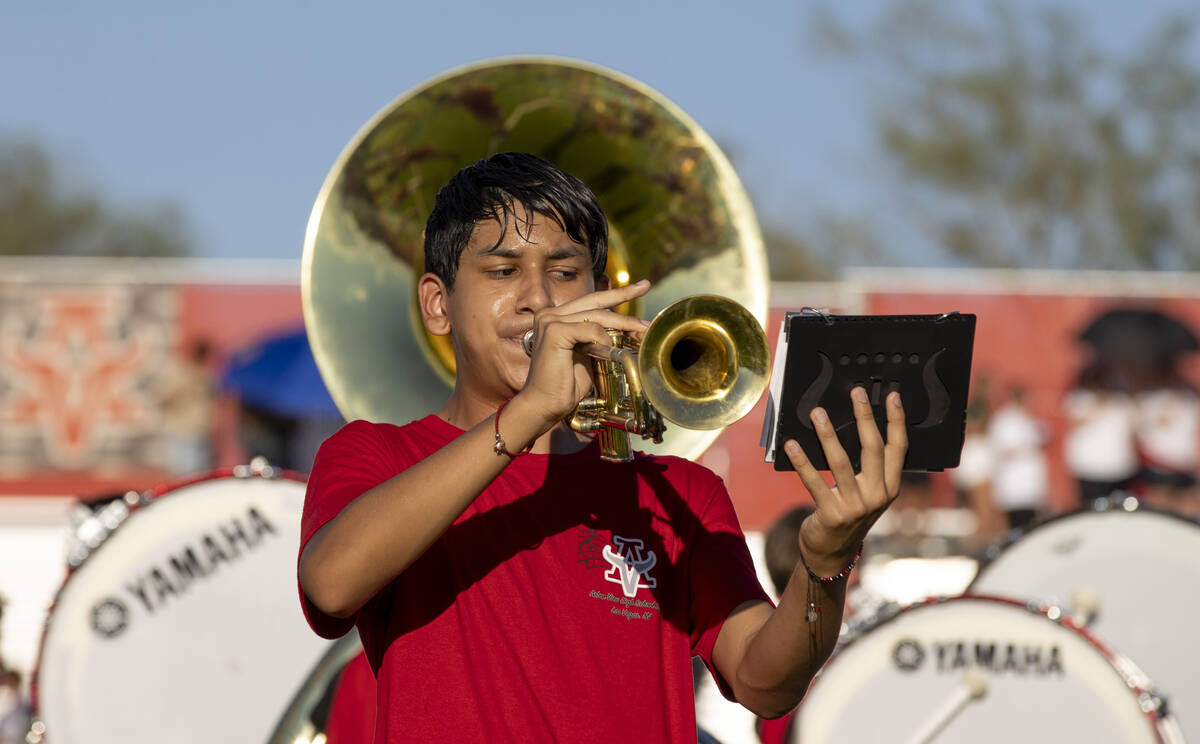 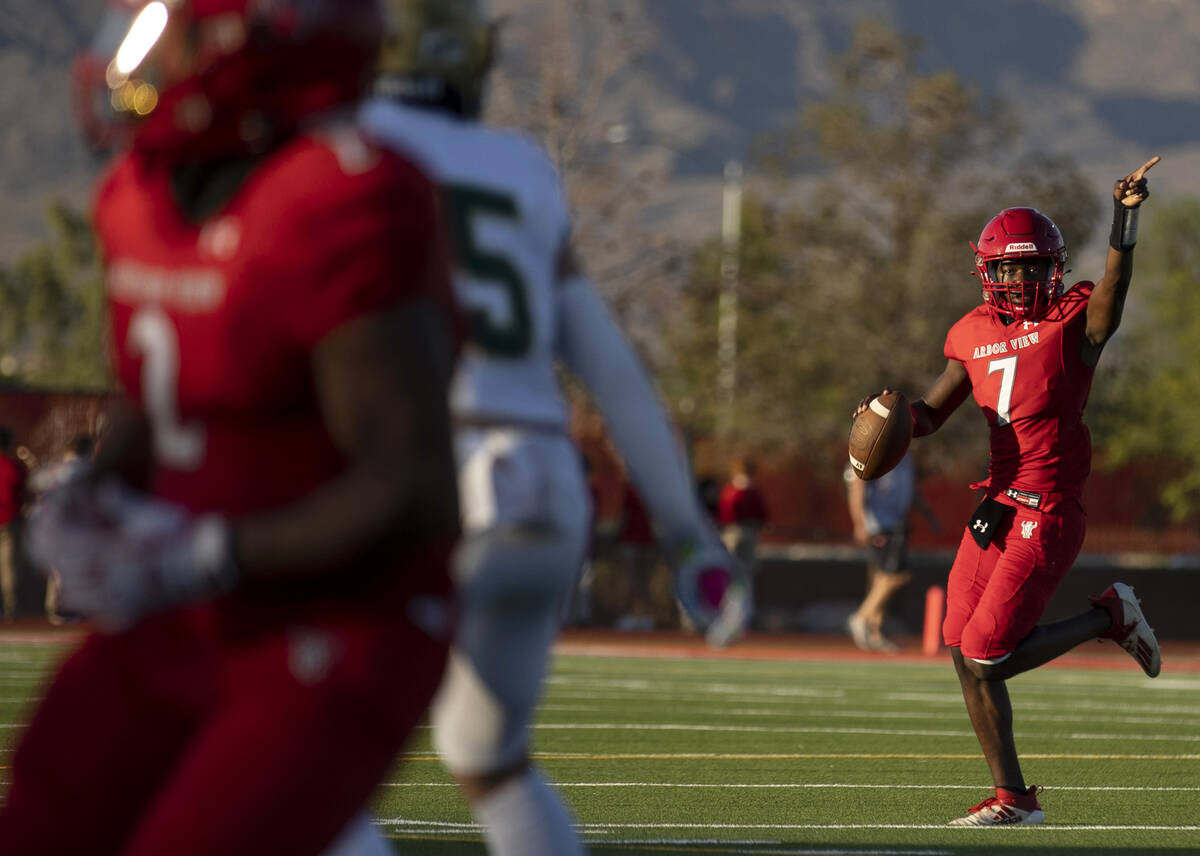 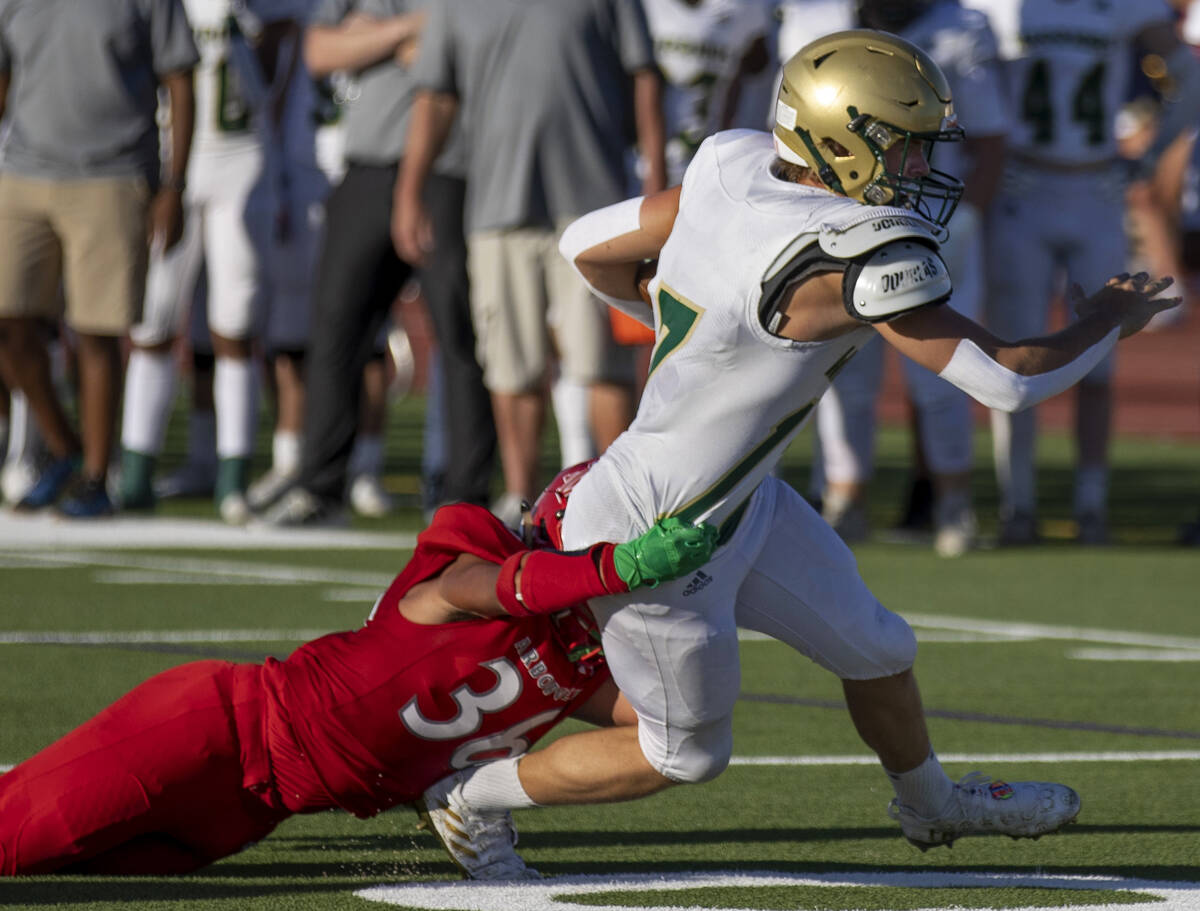 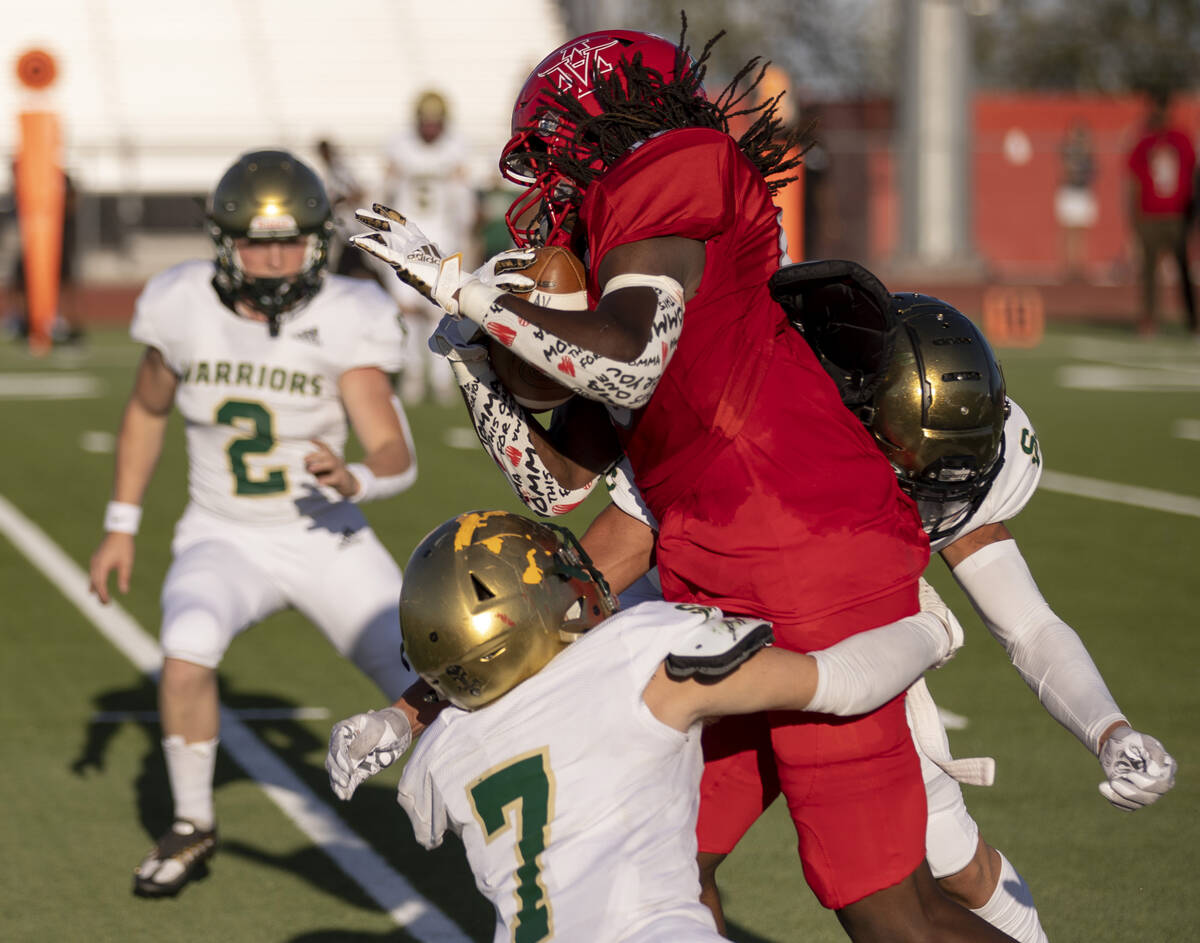 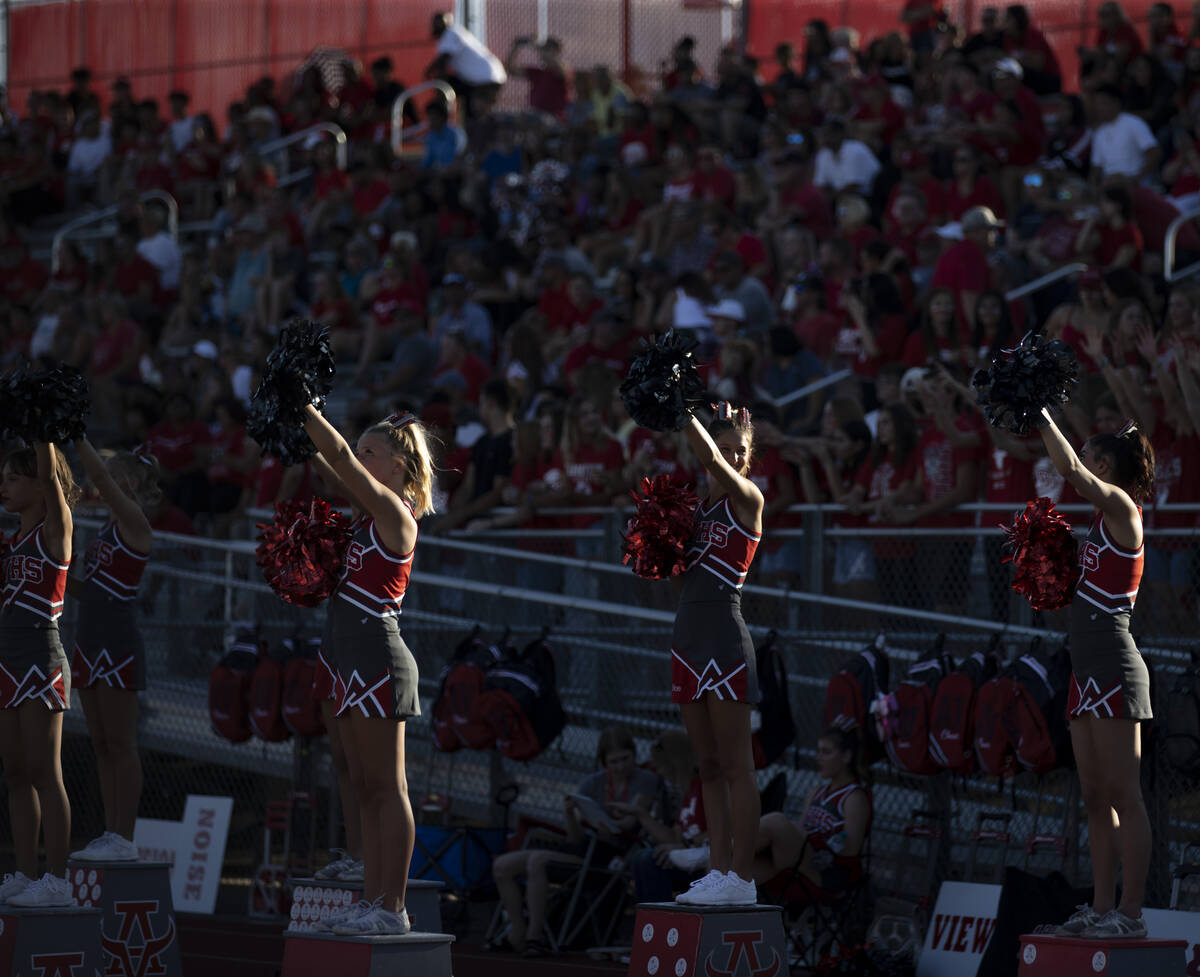 Arbor View High School hosts Snow Canyon for the first game of the season on Friday, Aug. 19, 2022, in Las Vegas. The game was tied 0-0 at halftime. (Steel Brooks/Las Vegas Review-Journal) 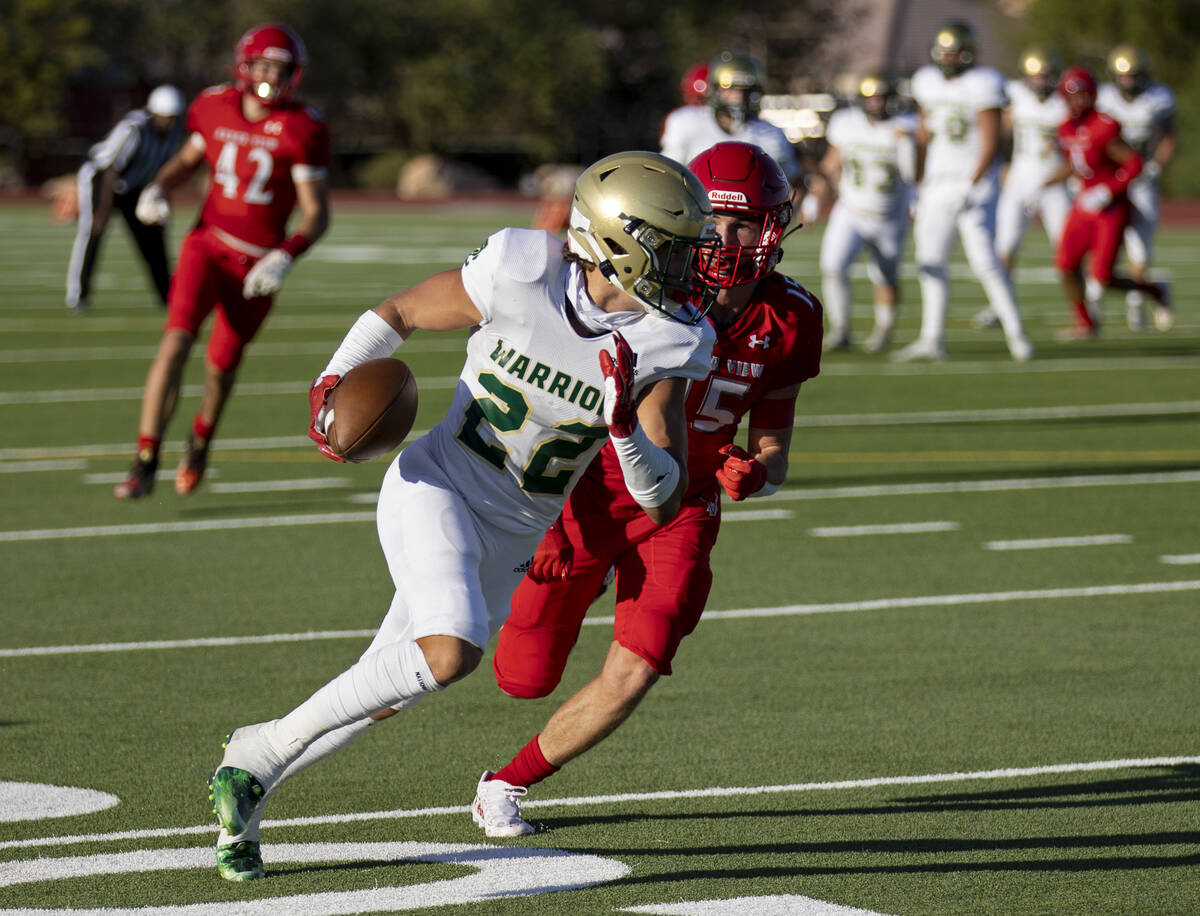 Snow Canyon's Brooks Esplin makes a run during the first half of their game against Arbor View High School on Friday, Aug. 19, 2022, in Las Vegas. The game was tied 0-0 at halftime. (Steel Brooks/Las Vegas Review-Journal) 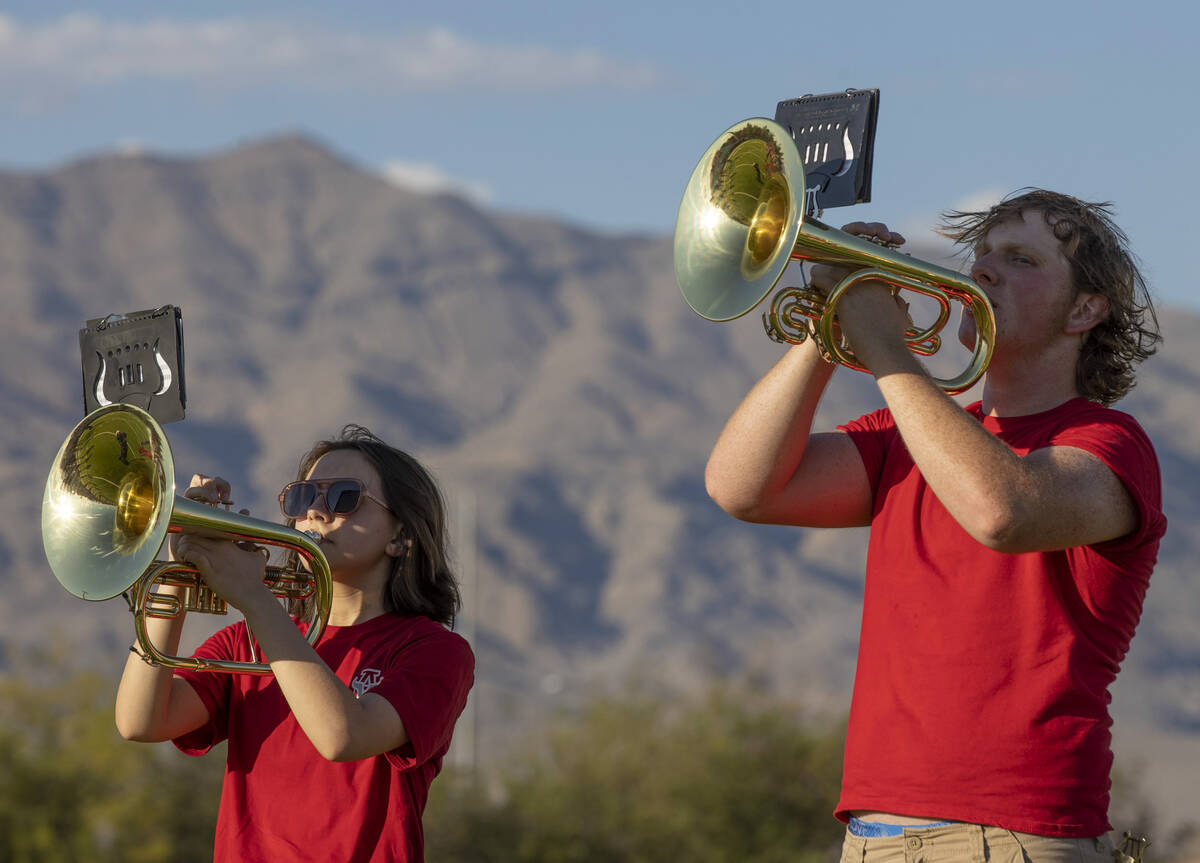 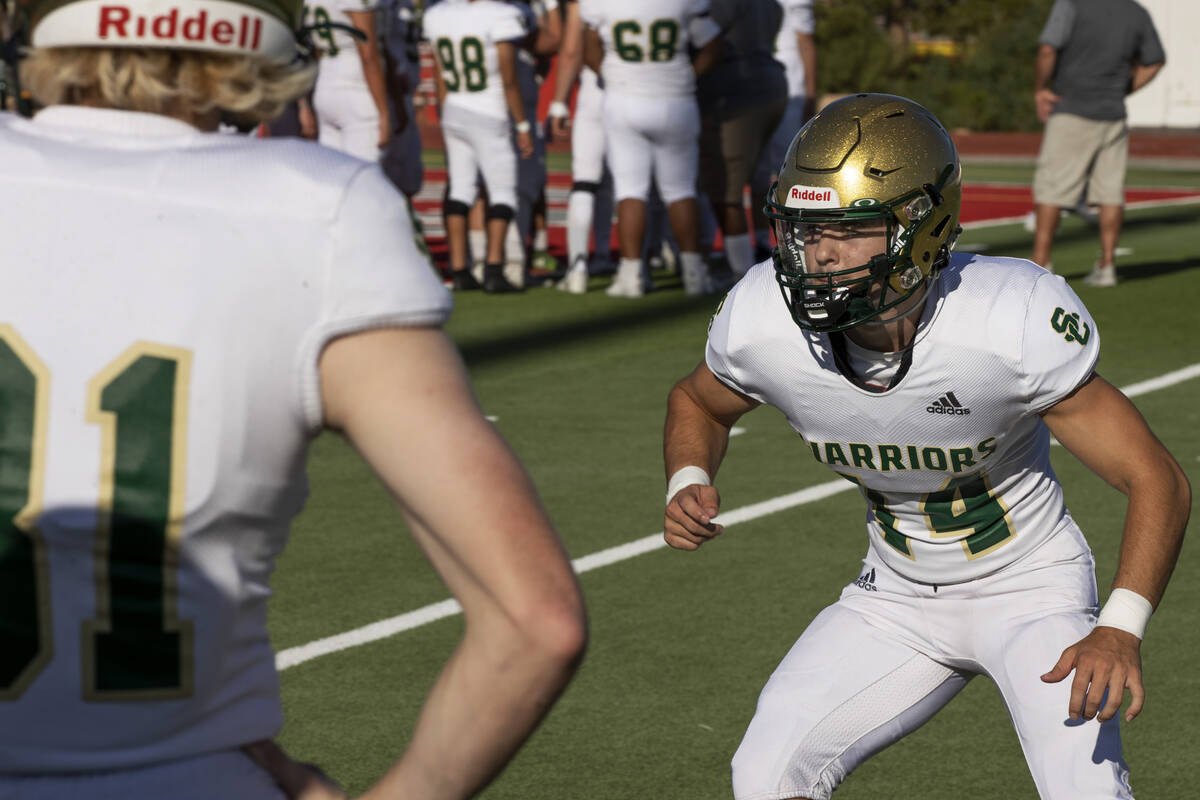 Snow Canyon High School's Will West (14) warms up before their game against the Arbor View Aggies at Arbor View High School on Friday, Aug. 19, 2022, in Las Vegas. The game was tied 0-0 at halftime. (Steel Brooks/Las Vegas Review-Journal) 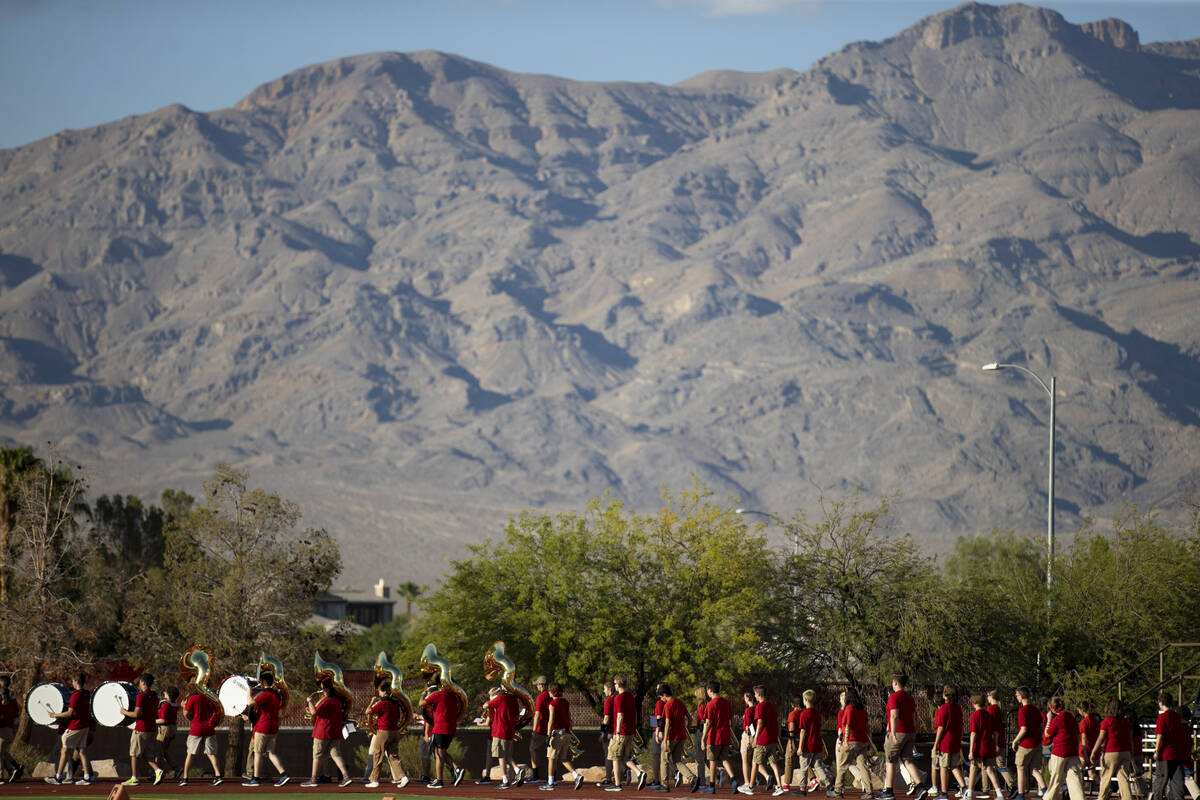 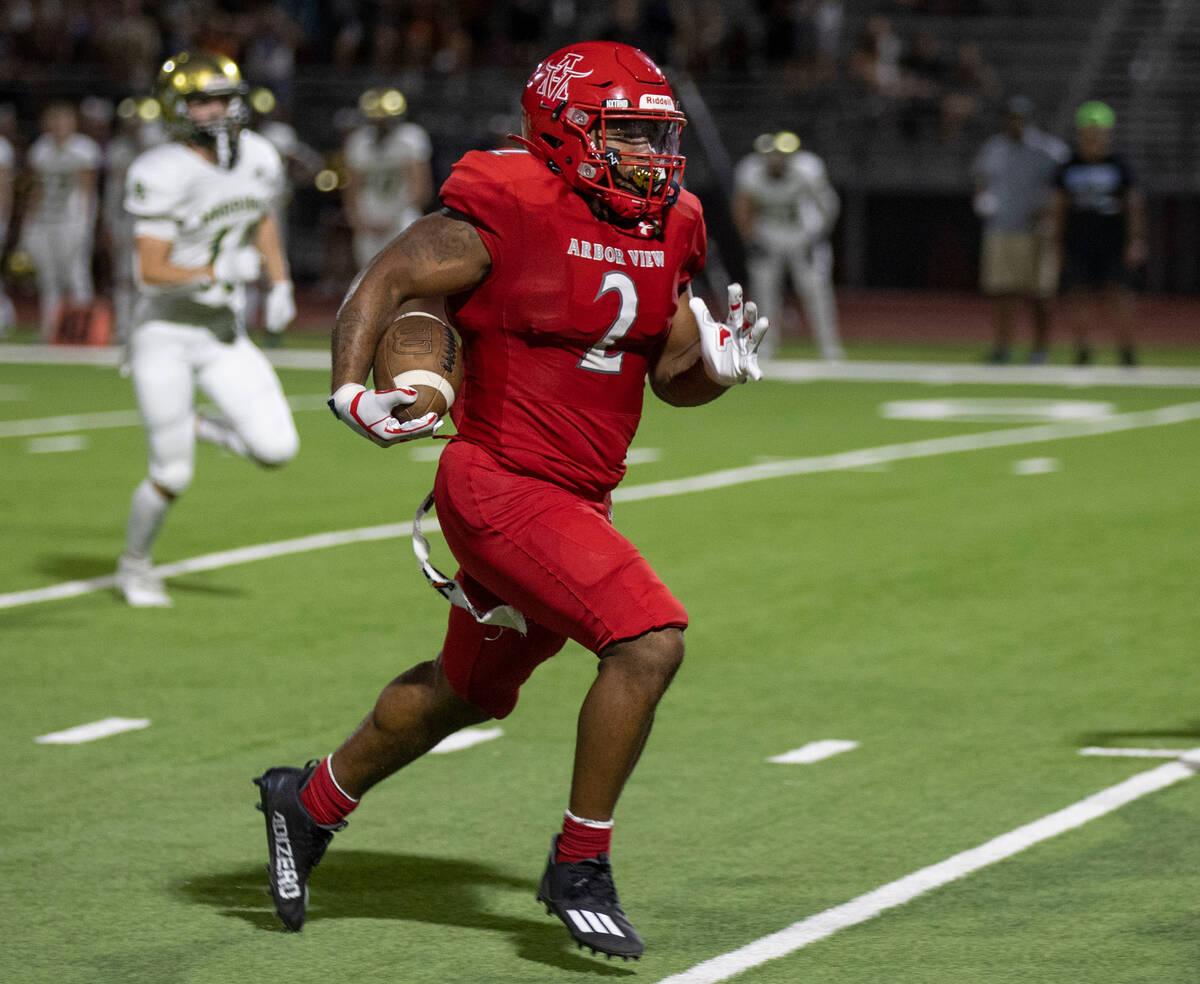 Just when it appeared nobody would score, Arbor View’s Juice Washington found a way to do it.

The Aggies’ senior running back broke loose on a 62-yard run late in the game, then found the end zone from six yards out on the next play, lifting host Arbor View to a 7-0 victory over Snow Canyon, Utah, in its season opener.

Washington’s late heroics on a hot August night enabled the Aggies to escape with a victory despite committing four turnovers and struggling to find offensive continuity.

“You’re not going to win many games like that,” Arbor View coach Matt Gerber said after breathing several sighs of relief.

The reason the Aggies won this one was because of their defense.

Arbor View’s offensive miscues and bobbles set up the visitors time and again on the home side of the 50-yard line. But time and again, the defense came up with a key stop or turnover — or a Snow Canyon missed field goal or holding penalty — to keep the high-scoring Warriors off the scoreboard.

“Our defense was awesome tonight. It’s hard to put in words what they did,” Gerber said of a stingy unit that allowed Snow Canyon 192 yards. “Their backs were against the wall, and they came through every time against a real powerful offense that put up 48 points last week.

“To get a shutout is pretty special.”

Until he broke loose for the long gainer, Washington’s 12-yard run in the second quarter was Arbor View’s longest rushing play. He carried eight times for 98 yards, and Arbor View quarterback Michael Kearns completed 5 of 16 passes for 92 yards with two interceptions.

Arbor View failed to complete a pass in the second half, but it turned out not to matter after the rugged Washington finally made a crease and a dent in the Snow Canyon defense.

“Juice had been running hard all night,” Gerber said about the game’s biggest play. “We’d been running that inside zone, and he was able to find a seam — we were having a hard time with our line getting to the second level with their linebackers, but we got to ’em on that play.”

Like much of the second half, neither side could establish a running attack or find much rhythm with its passing game in the scoreless first half.

Snow Canyon, which competes in Utah’s Class 4A (two rungs below the marquee 6A), again had the best scoring chances. The Warriors drove to Arbor’s 9-yard line on their first possession before turning the ball over on downs.