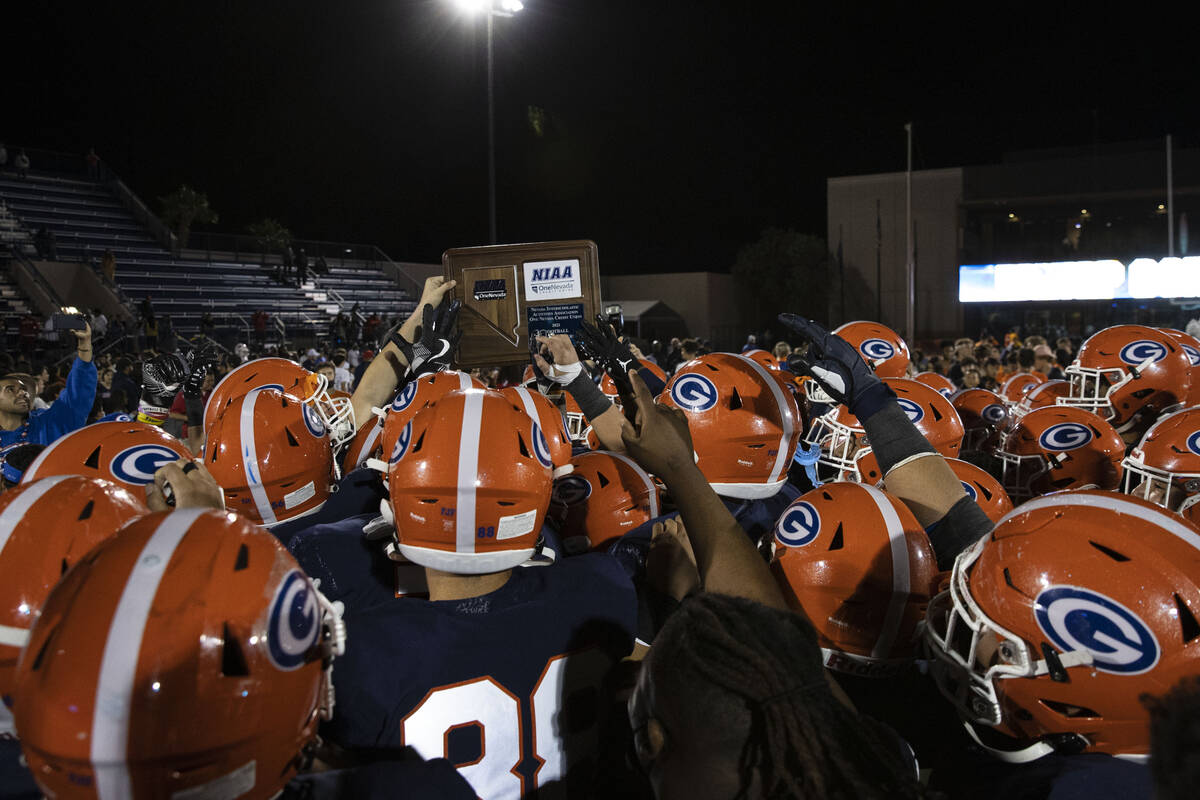 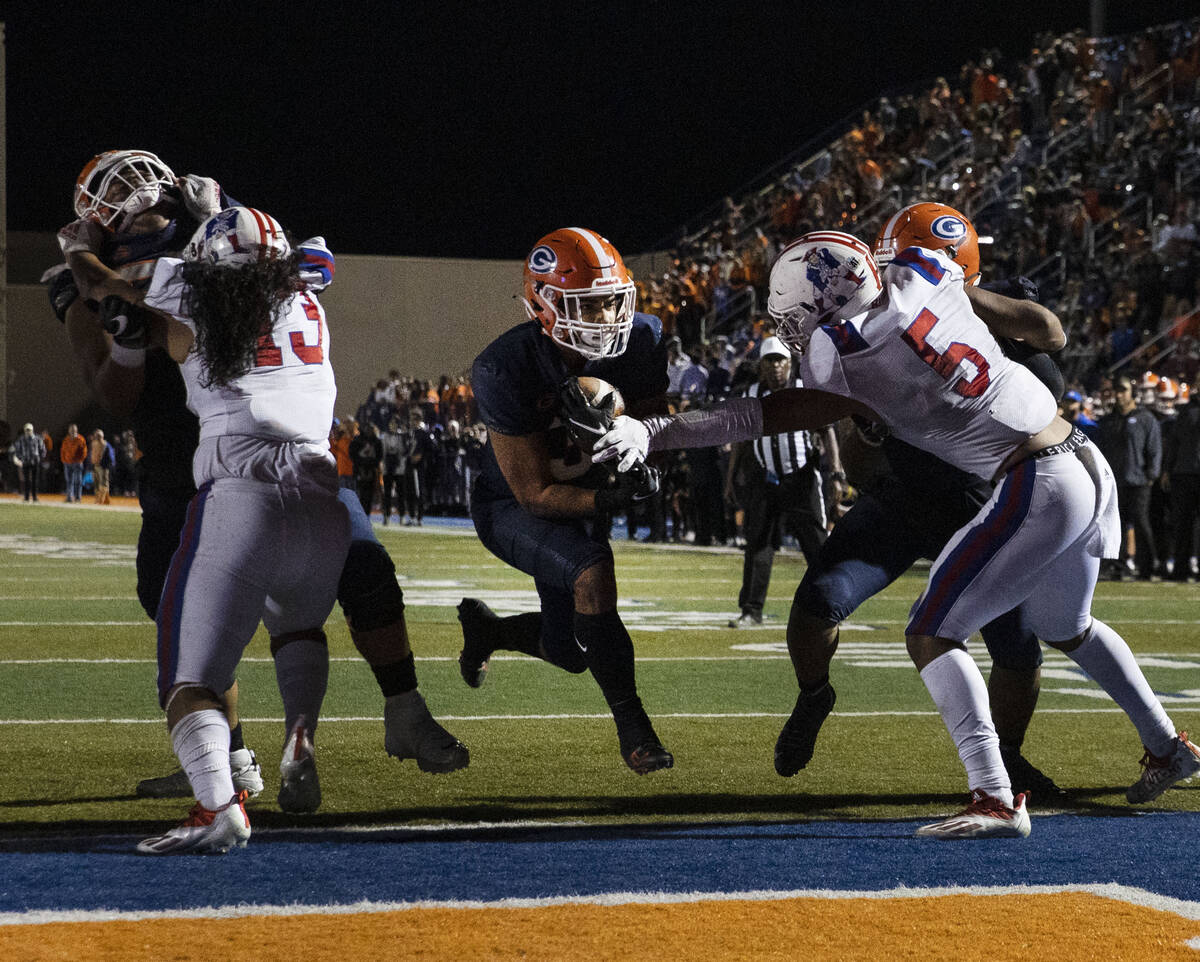 Bishop Gorman running back Cam'ron Barfield (3) runs for a touchdown during the second half of a Class 5A state semifinal football game against Liberty High at Bishop Gorman High School, on Friday, Nov. 12, 2021, in Las Vegas. Gorman won 35-14. (Bizuayehu Tesfaye/Las Vegas Review-Journal) @bizutesfaye 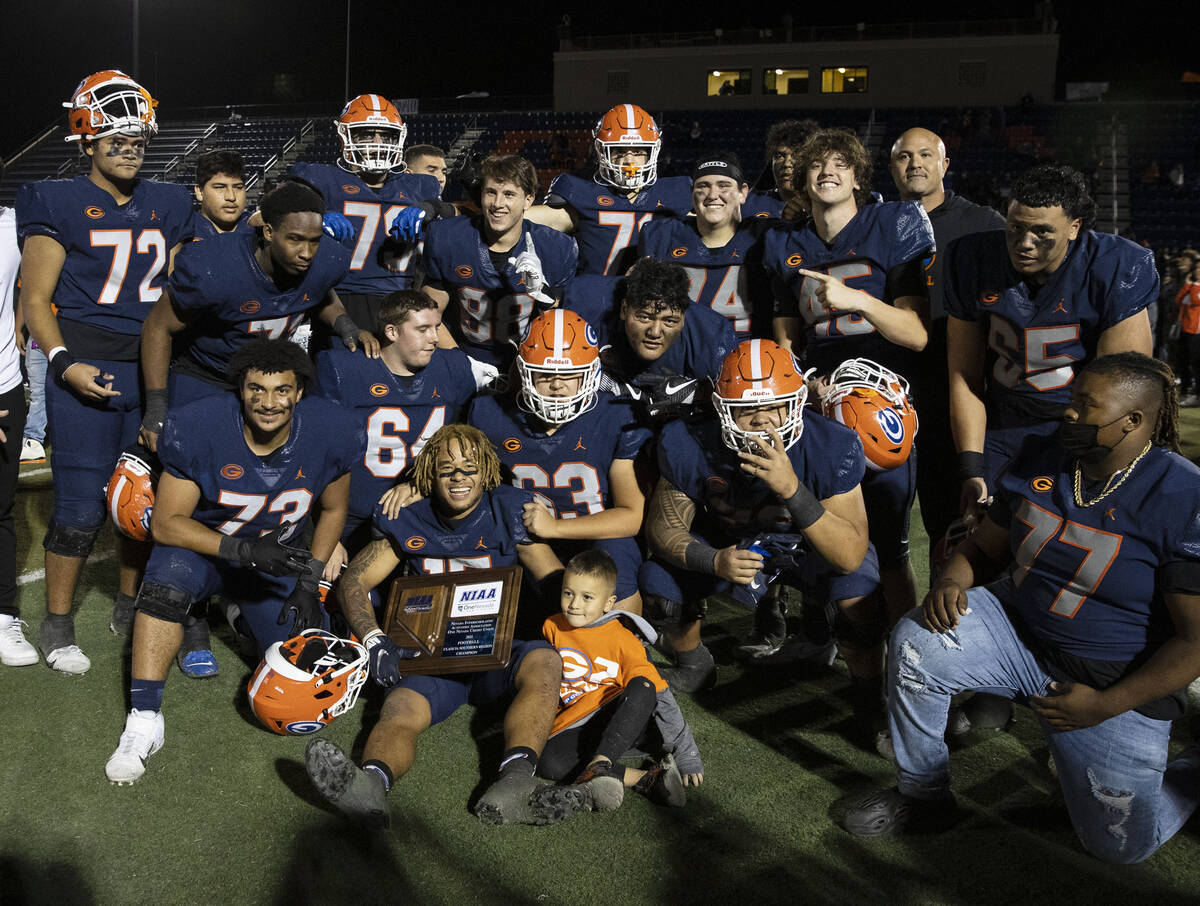 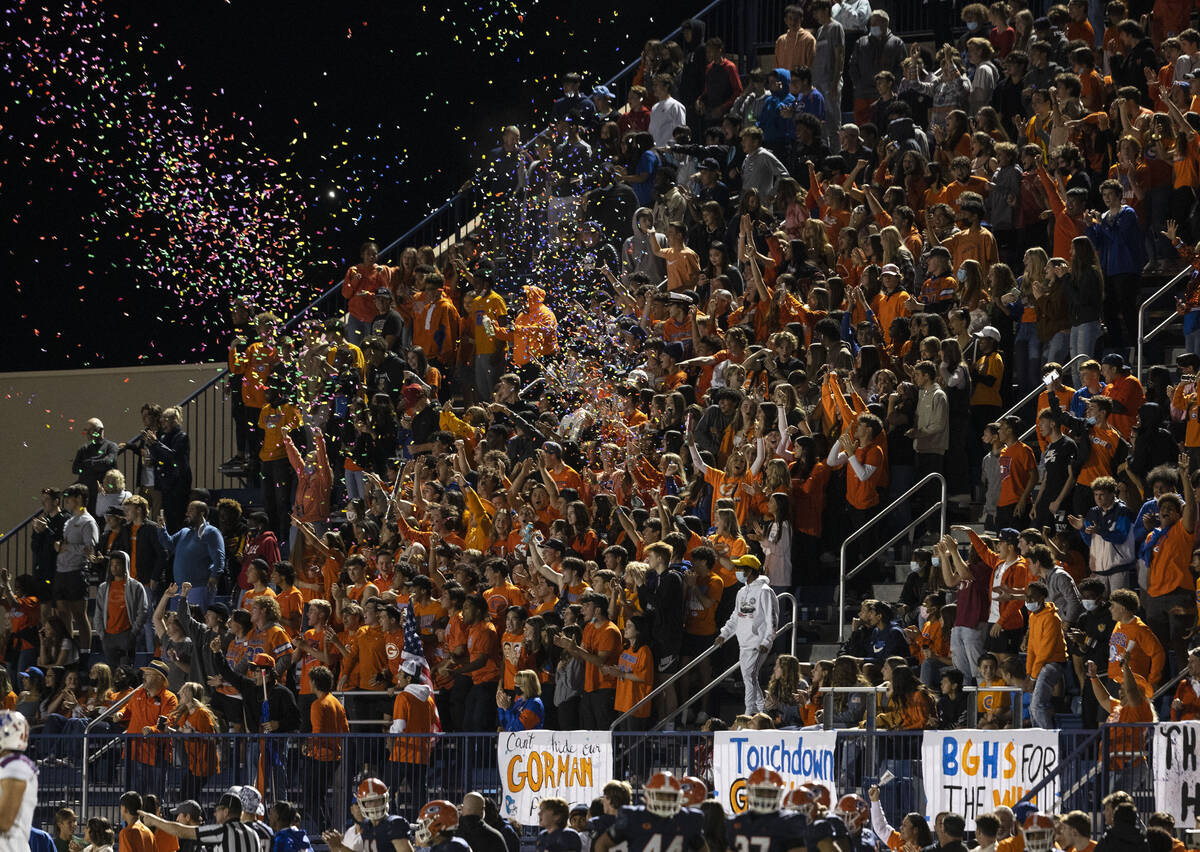 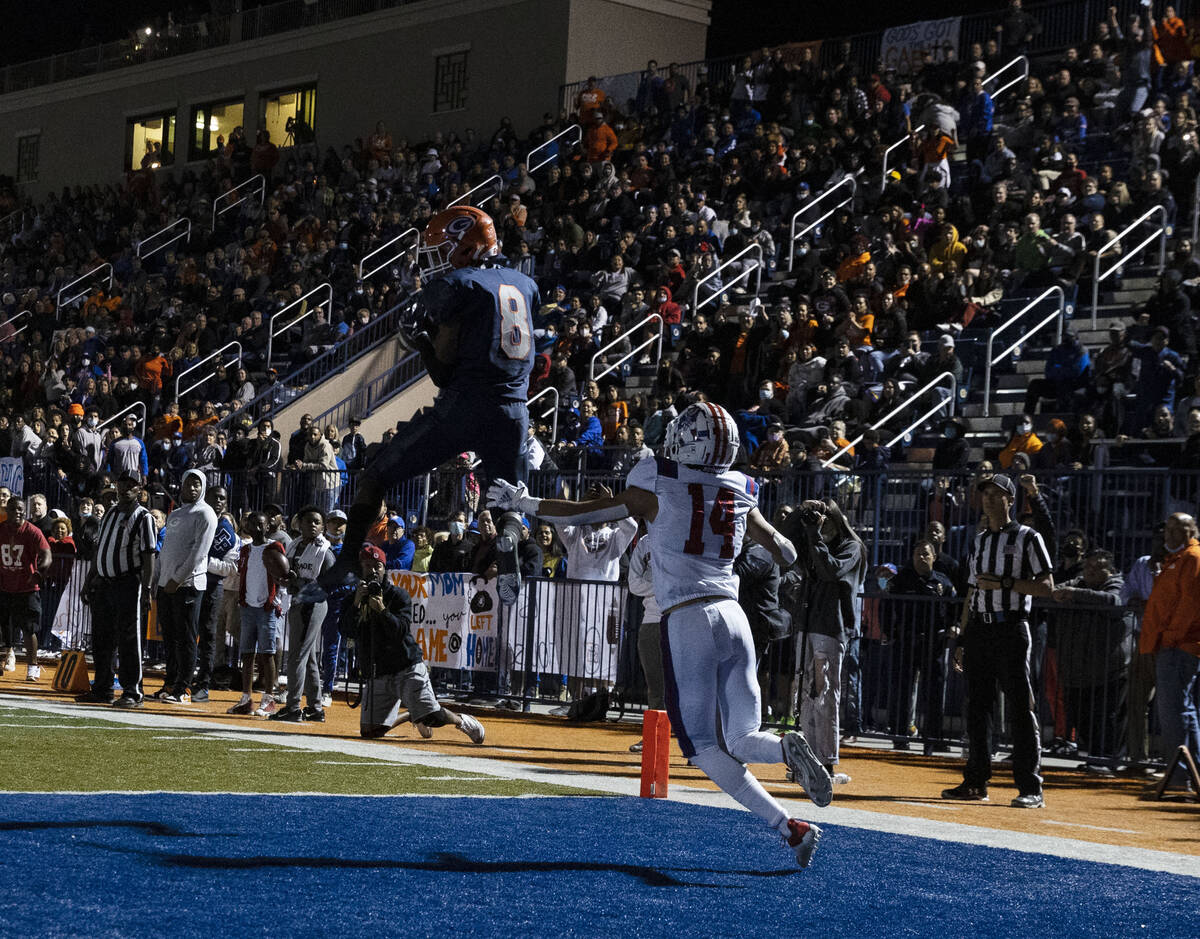 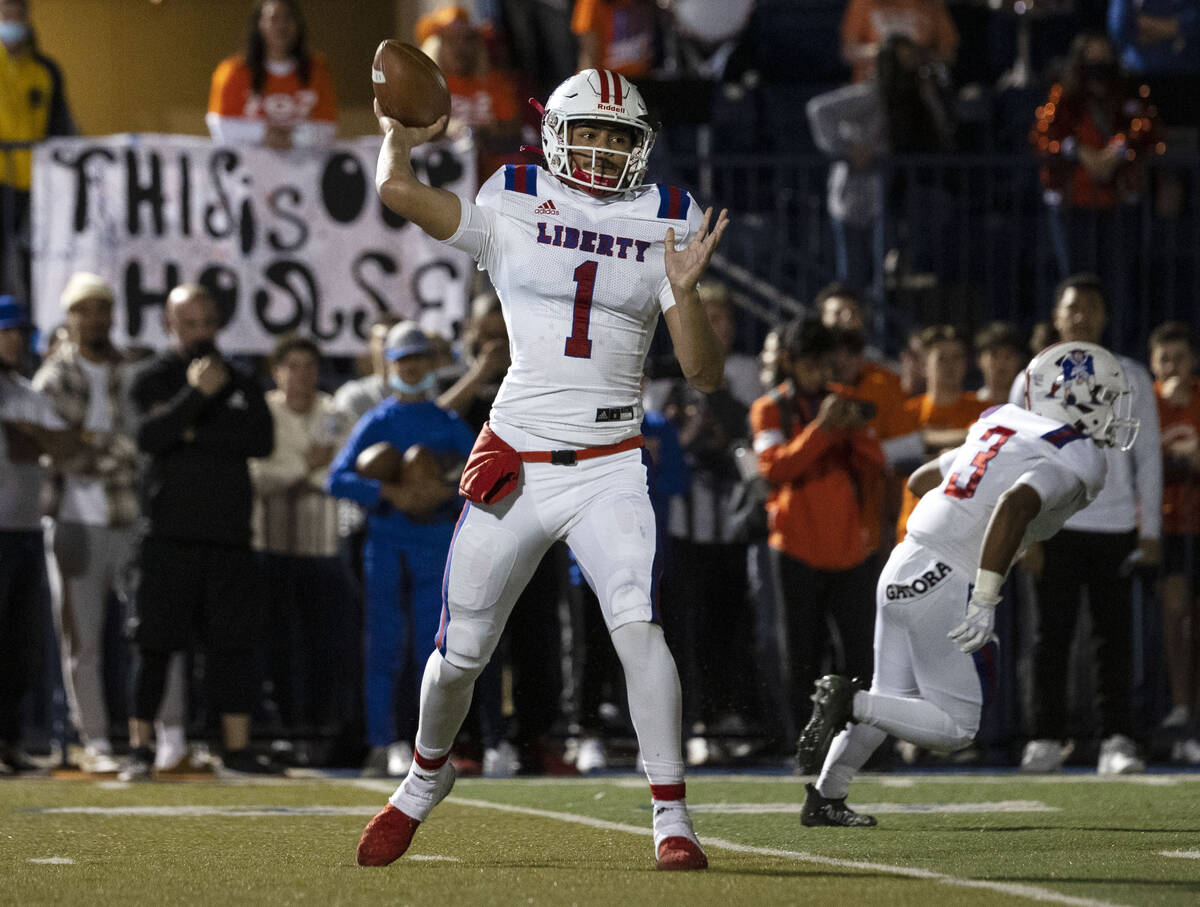 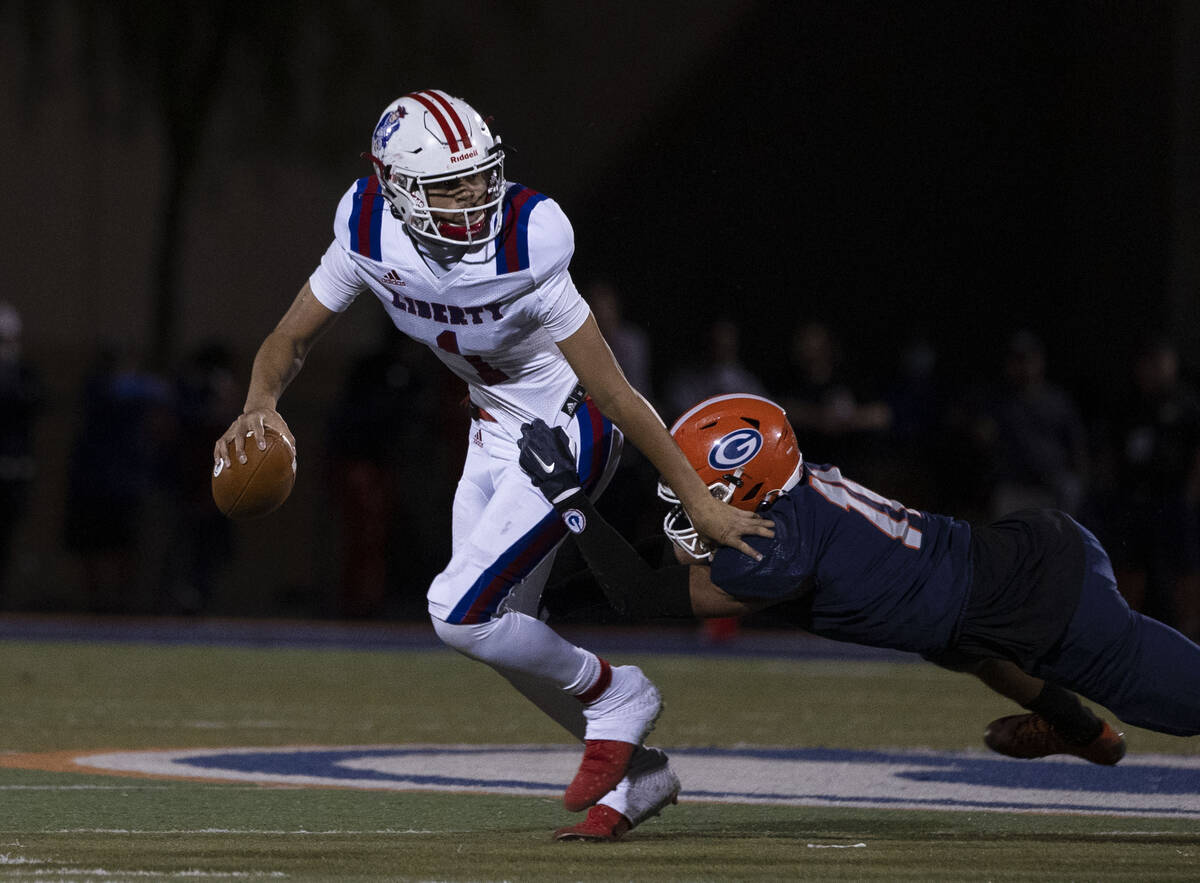 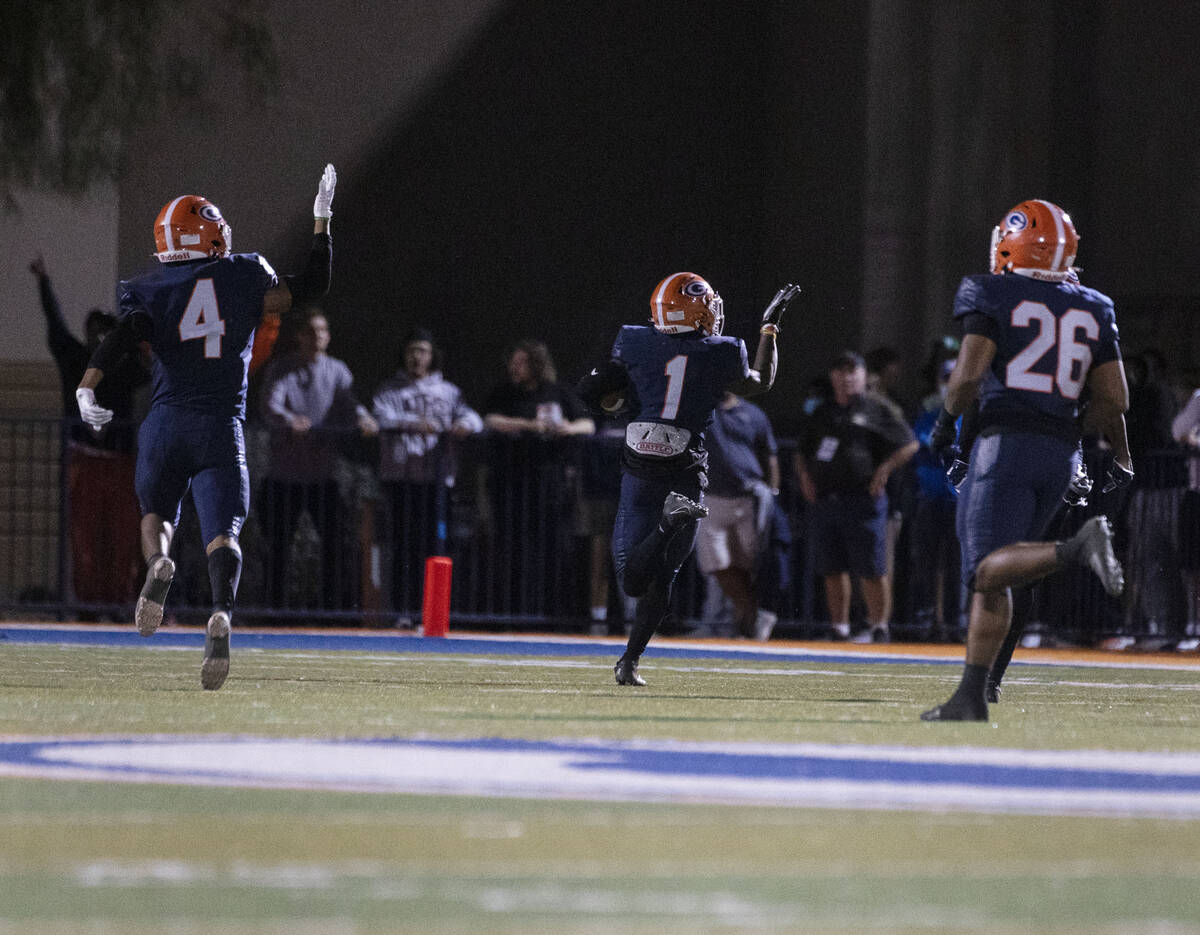 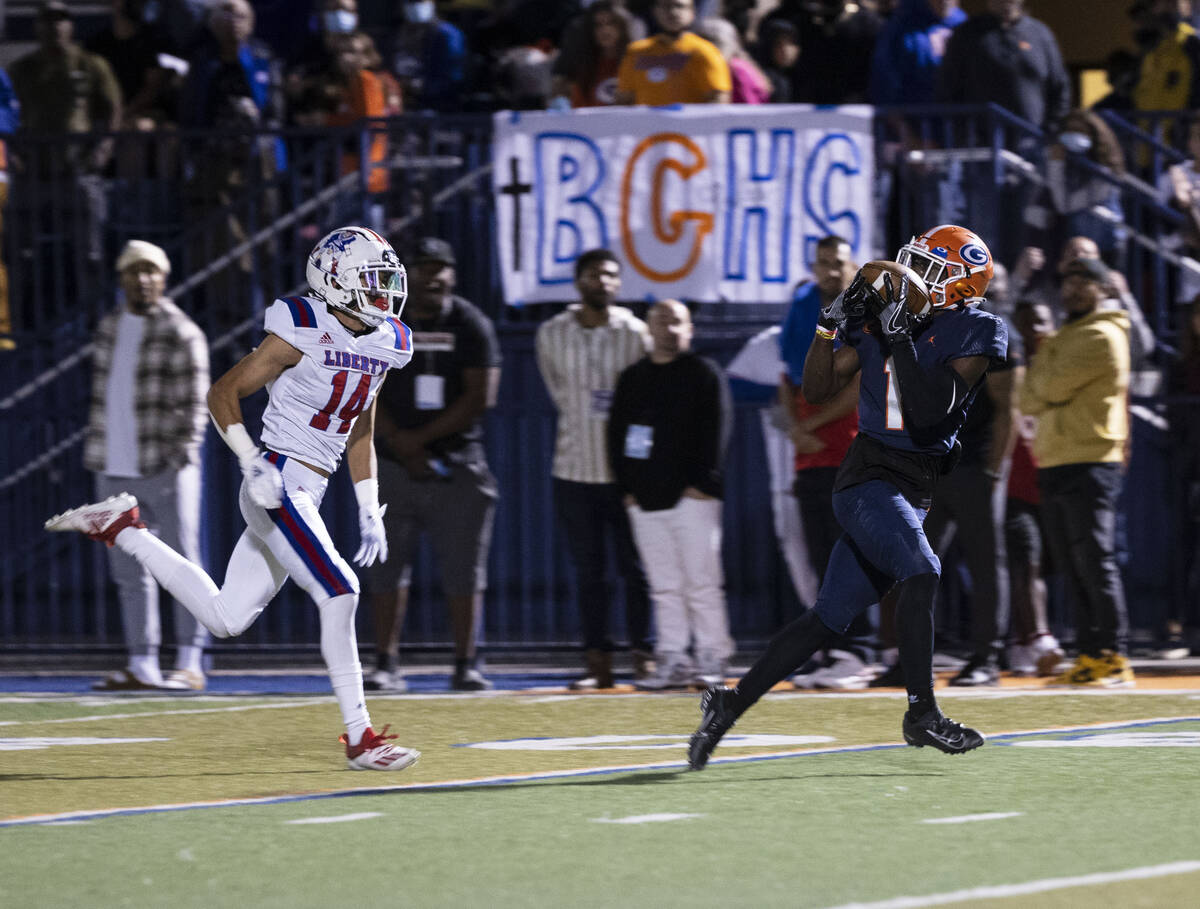 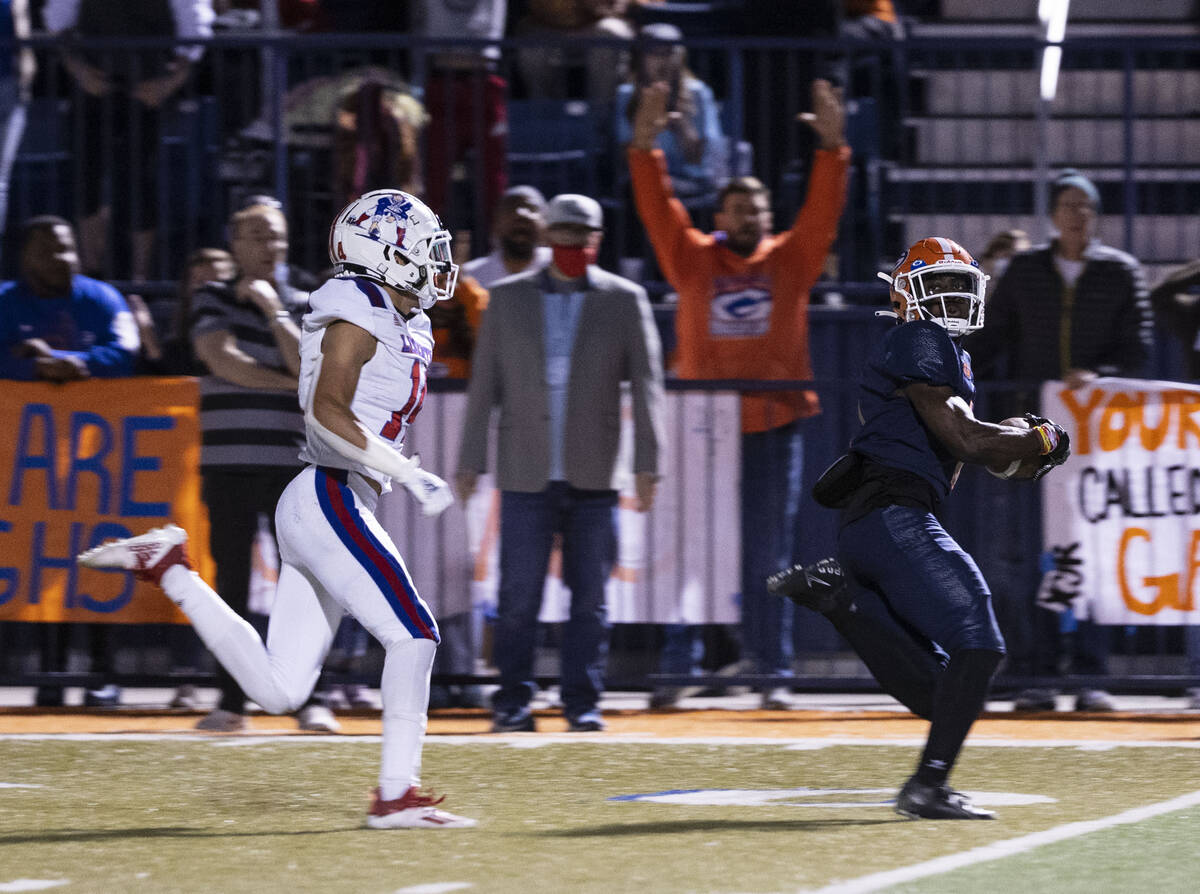 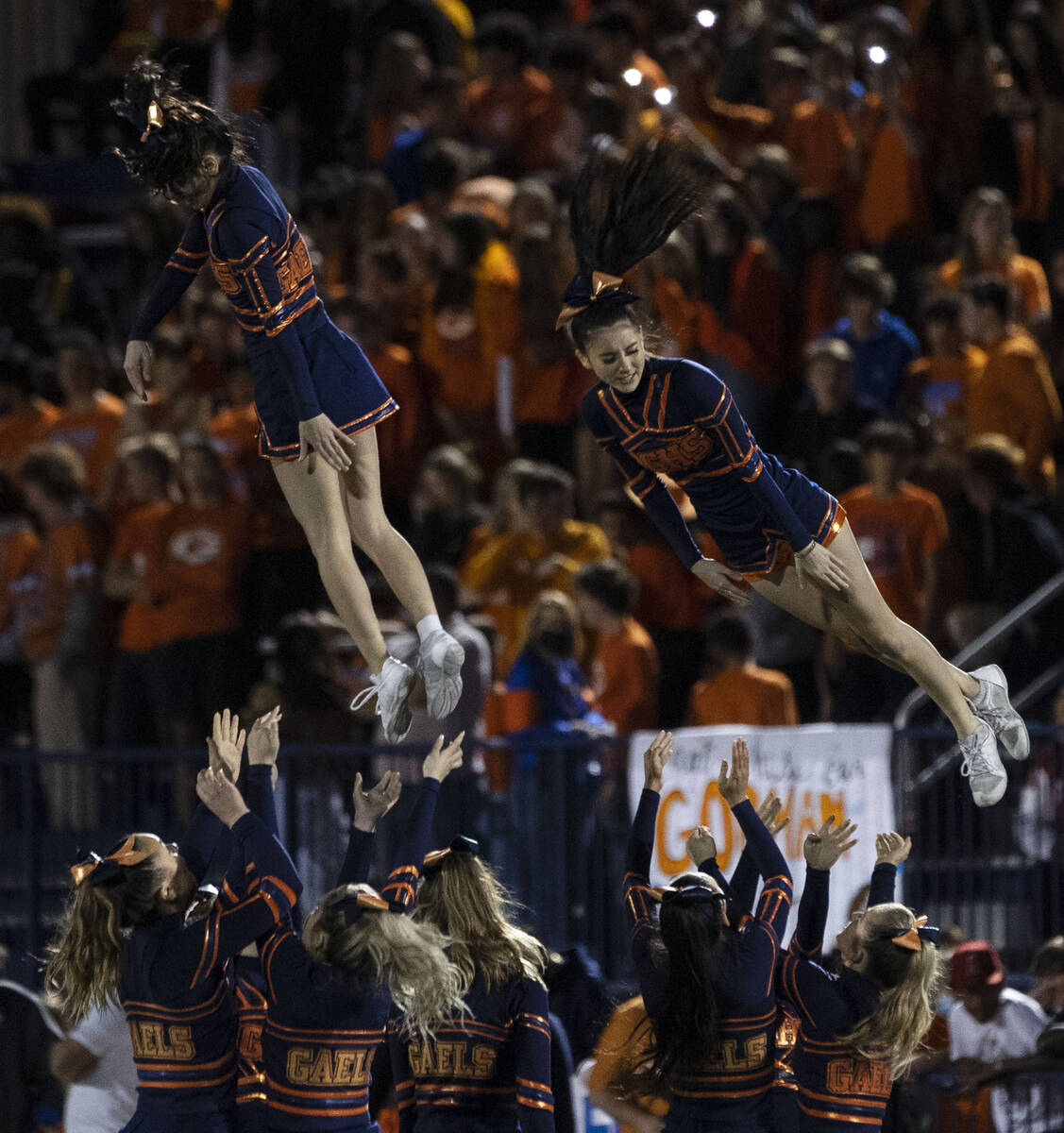 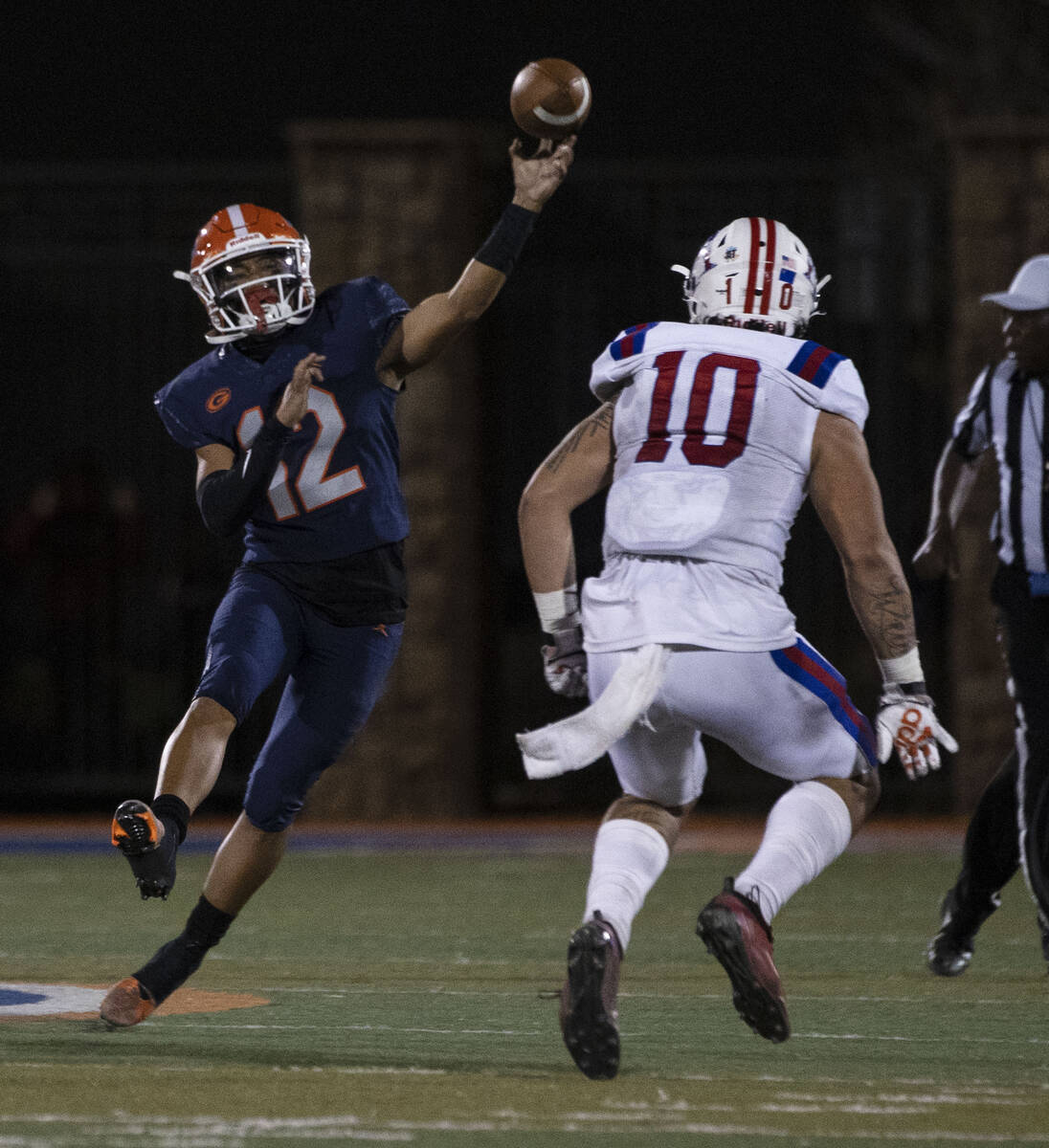 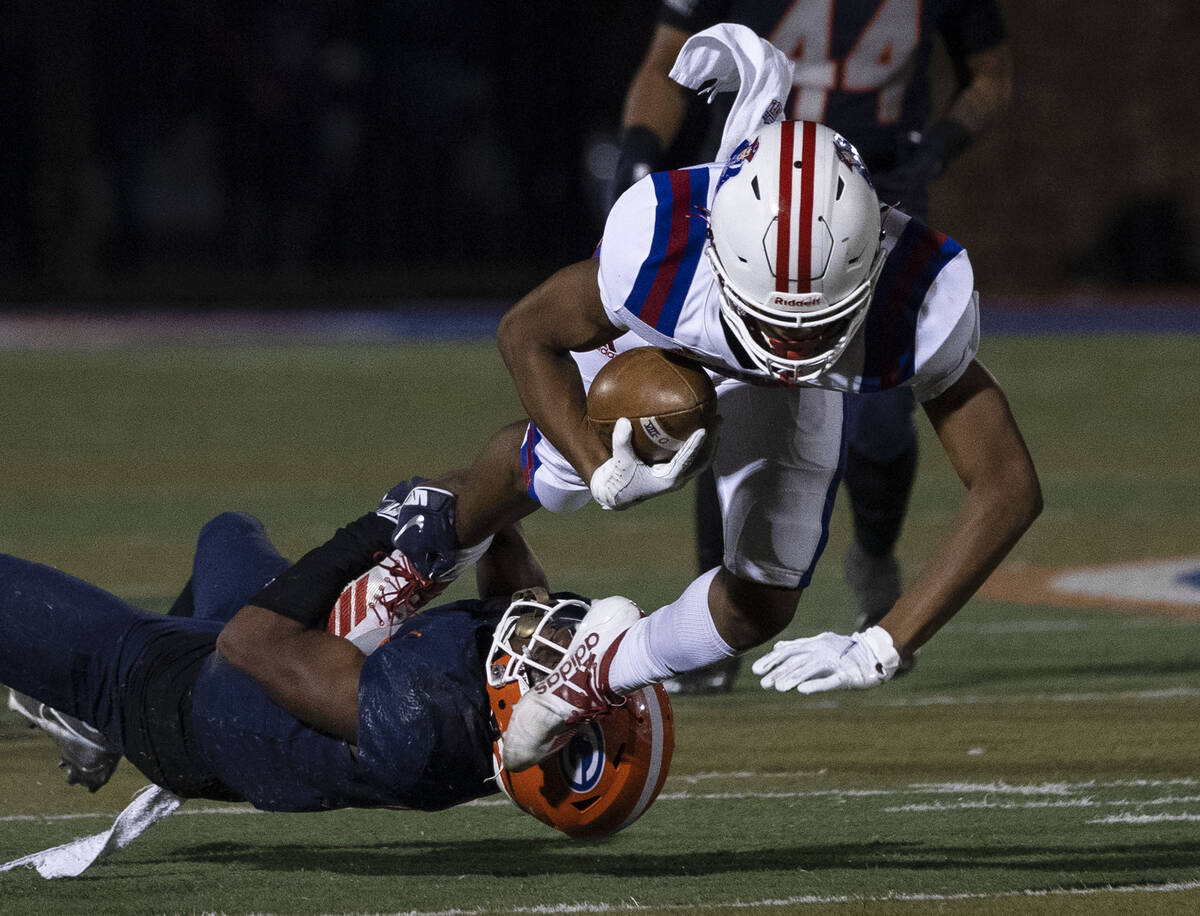 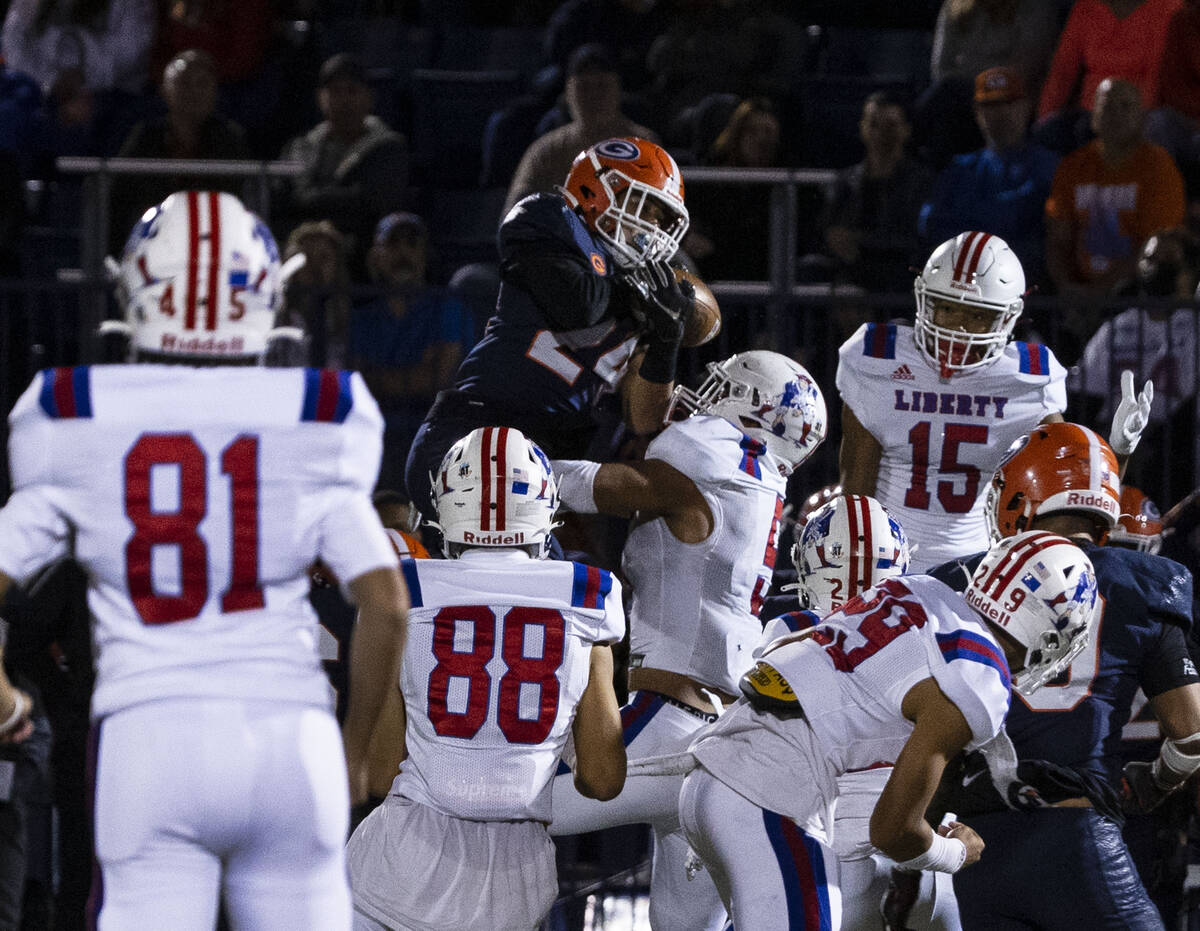 Bishop GormanÕs defensive back Kodi Decambra (24) sandwiched by Liberty High defenders as he catches a pass during the second half of a Class 5A state semifinal football game at Bishop Gorman High School, on Friday, Nov. 12, 2021, in Las Vegas. Gorman won 35-14. (Bizuayehu Tesfaye/Las Vegas Review-Journal) @bizutesfaye

Bishop Gorman tried to downplay the importance of its Class 5A Southern Region football championship game against Liberty.

But there was no denying it Friday night.

“There was no way this was going to be a normal Friday night,” Gorman coach Brent Browner said. “These kids, the atmosphere was great. Their fans were great. Our fans were great. This is what high school football is supposed to look like.”

Zachariah Branch took advantage of the big stage to put on a show. The Gorman junior scored the first two touchdowns of the game on a 93-yard punt return and 53-yard pass from Micah Alejado to put the Gaels ahead en route to a 35-14 home victory.

Gorman (11-1) had waited two years since Liberty ended its reign of dominance in 2019. The Gaels won 10 straight state championships and 115 in a row against in-state opponents before Liberty beat them 30-24 in overtime in the Desert Region championship game.

“There were a lot of emotions before this game, but we came out here and played our usual game and didn’t let our emotions get the best of us,” Gorman safety Zion Branch said. “Our team played great on both sides of the ball.”

Alejado threw for 238 yards and three touchdowns, including a short pass in the right flat that Jonathan Brady took 80 yards for a score that gave the Gaels a 21-7 halftime lead.

Liberty (10-2) controlled the ball for most of the first half, to the point the Gorman offense had only four snaps in the first quarter.

But the Patriots missed a field goal on their first drive and punted after a third-down sack pushed them back from the Gorman 34. That was when Liberty made its first huge mistake of the night, kicking the ball down the middle of the field.

Zachariah Branch made the first man miss with a juke move, then got to the sideline and showed the speed that made him the Class 5A Southern Region 100-meter champion last spring.

On his second score, Zachariah Branch ran a stop-and-go that left his defender behind, and Alejado found him wide open for the touchdown.

“That kid is electric,” Browner said. “You don’t see it as much because some of the games get out of hand, but we could give him the ball pretty much at any time, and it’s special.”

Liberty answered after Zachariah Branch’s second touchdown by going to its best player, Germie Bernard. The senior popped a 64-yard run and scored four plays later on a 3-yard plunge to cut the deficit to 14-7.

But any momentum the Patriots might have gained evaporated two plays later when Brady took a short pass the distance.

The second half was mostly a defensive stalemate until Alejado escaped two defenders and about a 15-yard loss and found Maleik Pabon for an 8-yard score with 6:01 remaining.

“We had a play on the right, and nothing was open, and I scrambled and kept the play alive, but I wanted to play smart,” Alejado said. “I finally found Maleik open.”

Bernard struck again to give Liberty a chance 25 seconds later on a 65-yard TD pass from Jayden Maiava, but the Gaels ran the clock down to less than a minute before Cam Barfield plowed in from 2 yards for the final score.

Bernard did it all for the Patriots with 84 yards rushing, 143 receiving and a 49-yard kickoff return.

“We knew he’s an All-American player, for sure,” Zion Branch said. “He’s going to Washington, and I’ve known him for a very long time. We knew he was going to be a key player for this game, and this week we were trying to find where No. 2 was at. We executed well on defense.”