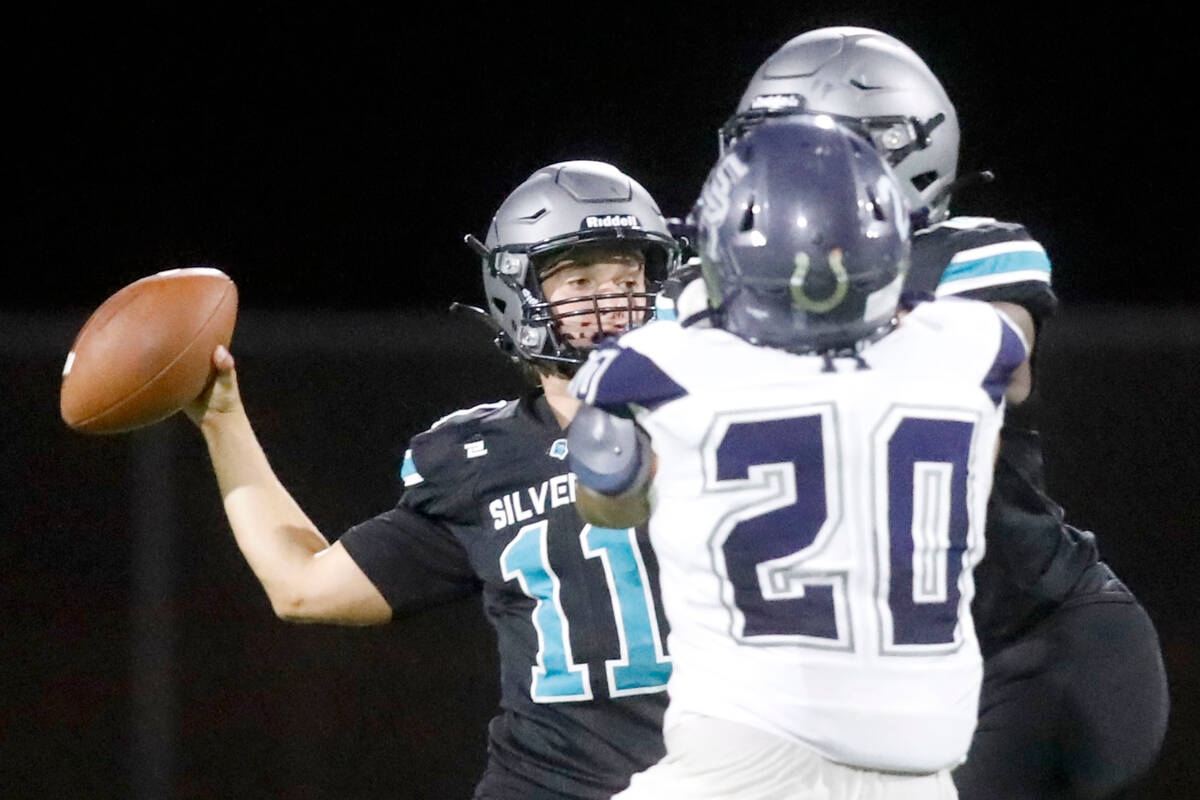 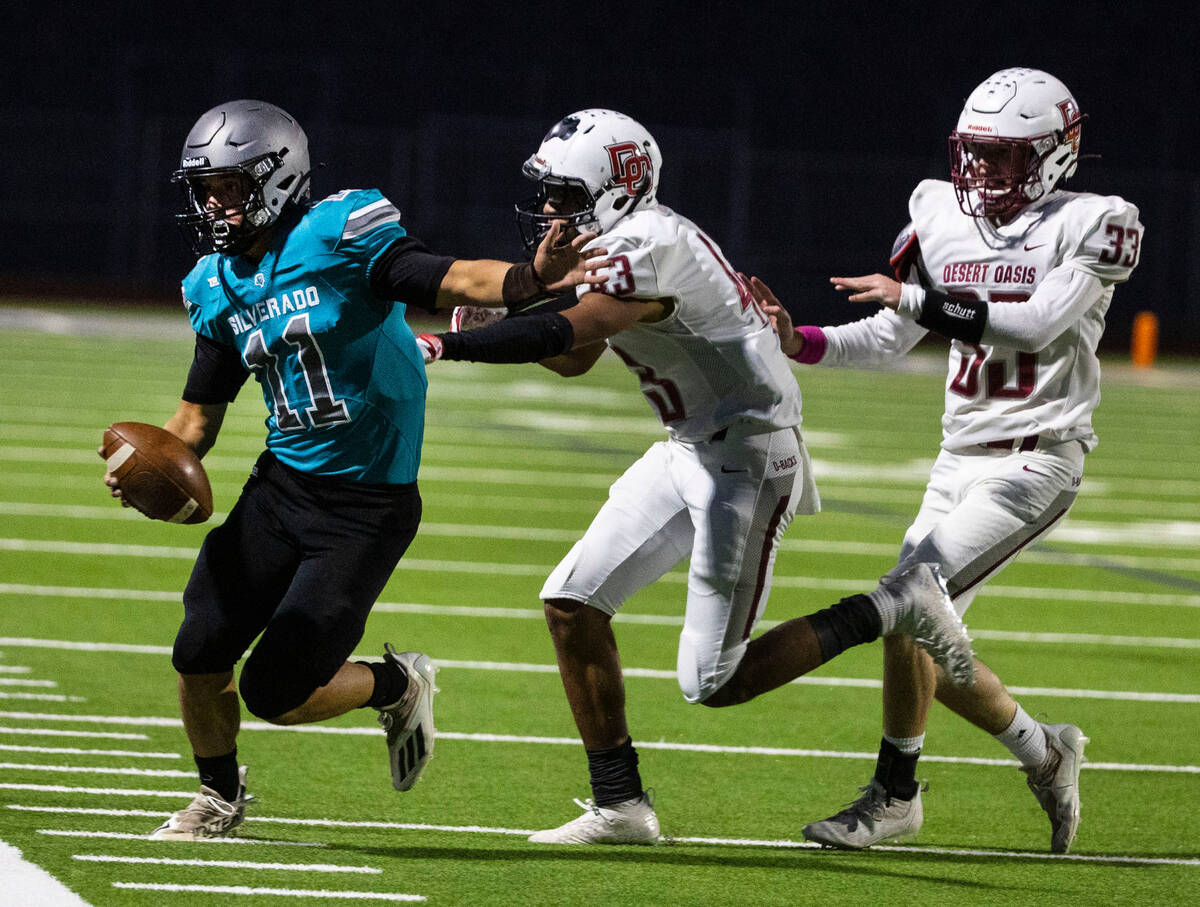 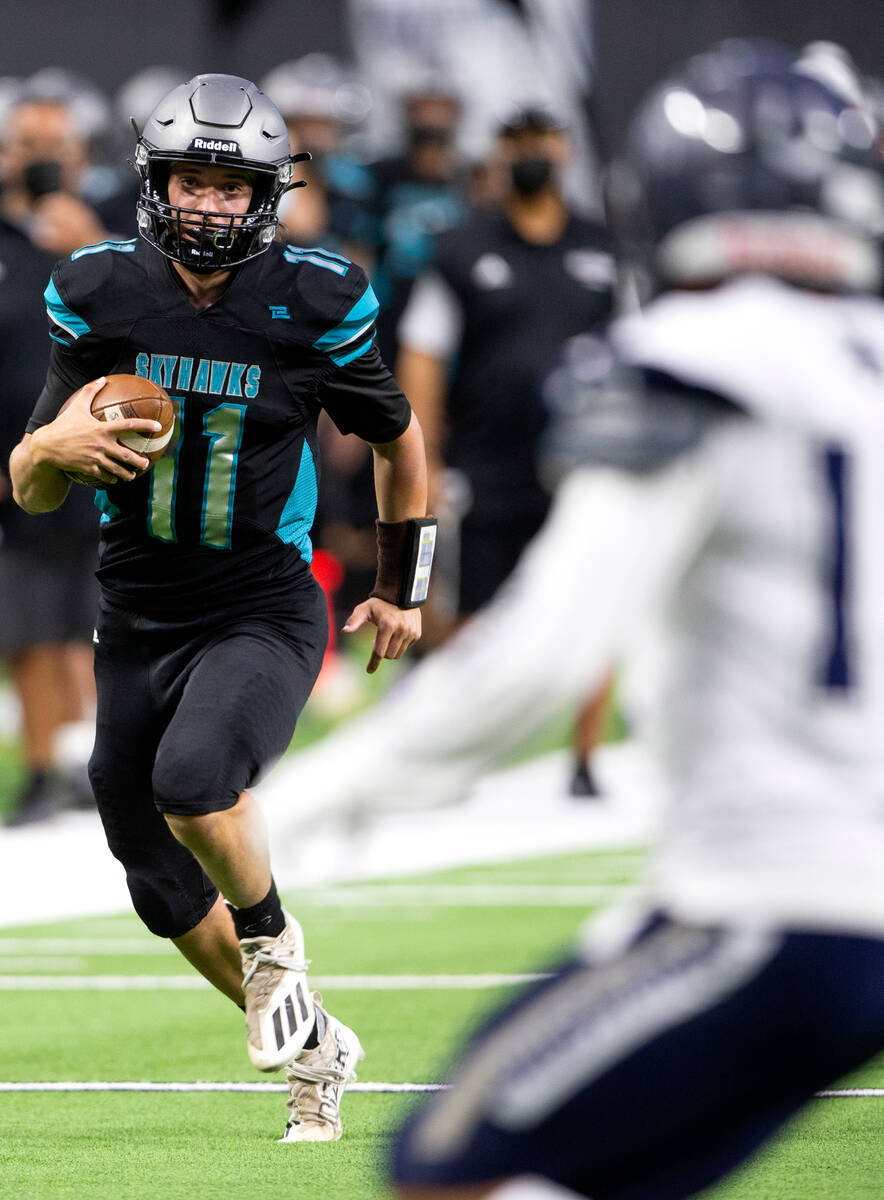 Silverado quarterback Brandon Tunnell (11) runs with the ball during the first half of the Class 4A football state championship game against Shadow Ridge at Allegiant Stadium on Thursday, Nov. 18, 2021, in Las Vegas. (Ellen Schmidt/Las Vegas Review-Journal) @ellenschmidttt

Senior Brandon Tunnell has been Silverado’s starting quarterback since the first game of his freshman year.

Entering his junior year, Silverado still expected to be primarily a running team. But that all changed after the Skyhawks’ second game.

Tunnell threw for 259 yards and three touchdowns to lead the Skyhawks to a 50-29 win over Shadow Ridge. That game established Silverado as the clear favorite in Class 4A, a status they held all the way to the end when they dominated Shadow Ridge again 61-27 in the state championship game.

“We fumbled on our first drive, and they had so many guys up front, I said we’re going to have to throw,” Silverado coach Andy Ostolaza said. “From there, we said, ‘OK, we’re going to throw it whenever we want.’”

That was music to Tunnell’s ears.

He went on to throw for 1,942 yards and 27 touchdowns with six interceptions and put on a show in the state championship game by completing 13 of 18 passes for 325 yards and five touchdowns. Two of them went to Tunnell’s twin brother, Bryson.

“I plan to get the ball to him a lot more this season,” Brandon Tunnell said. “I’ve been playing football with him on the same team since we were 6. I’m really excited to play my last year of high school football with him.”

If Ostolaza had a criticism of Tunnell as a young quarterback, it was that he looked for his brother too much. It certainly wasn’t his toughness, which Tunnell showed when he broke his hand in the second game of his freshman year in the second quarter against Las Vegas but had a pad put on it and played the fourth quarter.

It also wasn’t his maturity, which Tunnell showed by taking responsibility for two losses in his freshman year. And Tunnell showed he could get others involved and not focus all his attention on getting the ball to Bryson last season.

“The way he spread the ball around last year was impressive,” Ostolaza said. “His confidence makes everybody rise to his level. He’s the best of the best. He’s the winningest quarterback in our school history, even after losing the year to COVID.”

While Tunnell had a talented group of receivers to throw to last year and will again this season, when it comes to the red zone, he looks for Bryson. After all, at that most crucial area of the field, why not throw it to the person with which Brandon shares “Tunnell vision?”

But no matter who’s on the receiving end, Tunnell is proud to have gained the trust of his coaches and help reshape the Silverado offense.

“I took being called a running team personally,” he said. “We have great running backs, and I understand the offense needs to be balanced. But we changed everybody’s perspective on our team and showed we’re more than a one-dimensional team. That definitely helped us win state last year.”