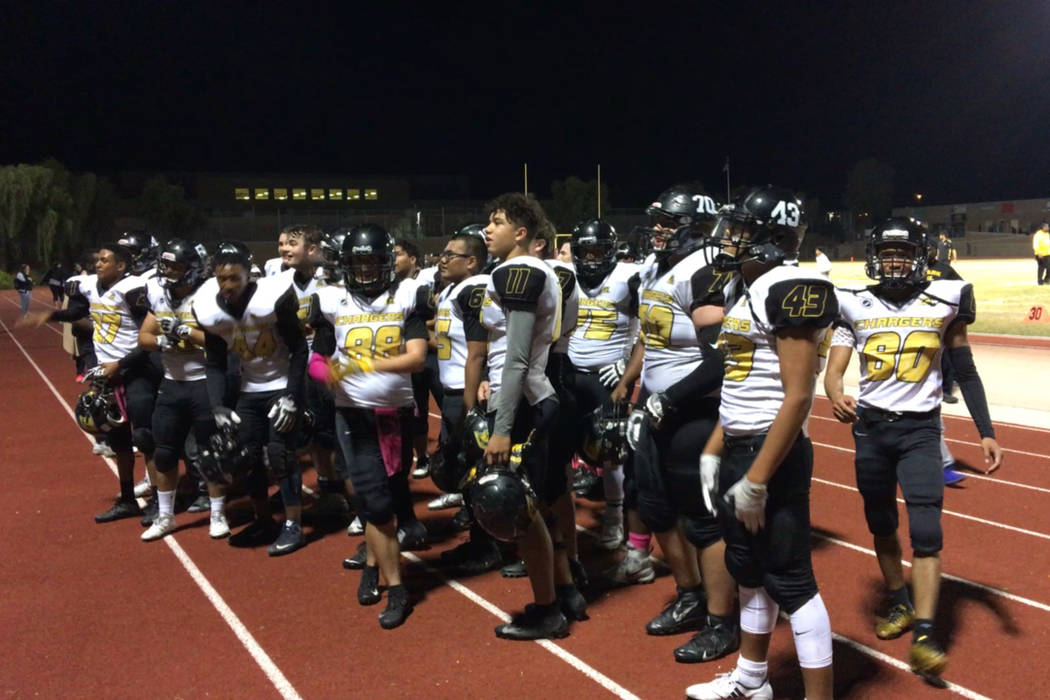 Riding a 13-game losing streak over two seasons and facing the prospect of finishing the year winless, Clark came into Desert Oasis Thursday as a team resolved to finally taste victory.

And after the Chargers fell behind 14-0 after the first quarter, instead of folding, they found a way to do just that.

Clark rolled up 518 yards of offense and stormed back – outscoring the Diamondbacks 45-16 over the final three quarters – to seize a 45-30 road victory.

“It has been hard,” quarterback My’Quel Johnson said of all the losing. “But coach teaches us always to have short term memory. So, we don’t dwell on the past each week. We acknowledge we lost, but we come back with a different motivation each week. Every game is a new week, every play is a new play.”

Clark showed that resolve to bounce back from adversity in two key moments in the game.

With 2 minutes, 11 seconds left before the half, Desert Oasis quarterback Colton Zobrist found Jacob Walsh in the left corner of the end zone with a 6-yard pass to extend the Desert Oasis lead to 21-13.

But the Chargers responded with a 11-play, 74-yard, scoring drive. And with only 2.3 seconds left in the half and the ball at the Diamondbacks 10-yard line, Johnson found Veal for a touchdown and ensuing 2-point conversion.

“Going into halftime we didn’t want to be behind,” Johnson said. “I trust our guys more than theirs. I just put it there so (Veal) could make the play.”

Johnson connected on 18 of 29 passes for 347 yards and three touchdowns. Veal finished with eight receptions for 214 yards, including three scores.

After Zobrist connected on a 30-yard field goal put the Diamondbacks back in front 24-21 with 4:05 left in the third quarter, Clark answered the bell again, driving 66 yards in five plays. Steven Shoats twisted and spun his way to the end zone on a 27-yard run, and the Chargers took their first lead of the game, 28-24 with 2:02 left in the third quarter.

Shoats followed that up on Clark’s following drive with a 10-yard touchdown run.

Zobrist passed for 191 yards and three scores for Desert Oasis (5-4, 1-4). The Diamondbacks will play at Silverado next week in a winner-take-all game for fourth place and the final playoff berth in the Southwest Division.

And while Clark will have no playoffs in its plans this season, Shoats said that getting the victory Thursday was still very big to the team and the school.