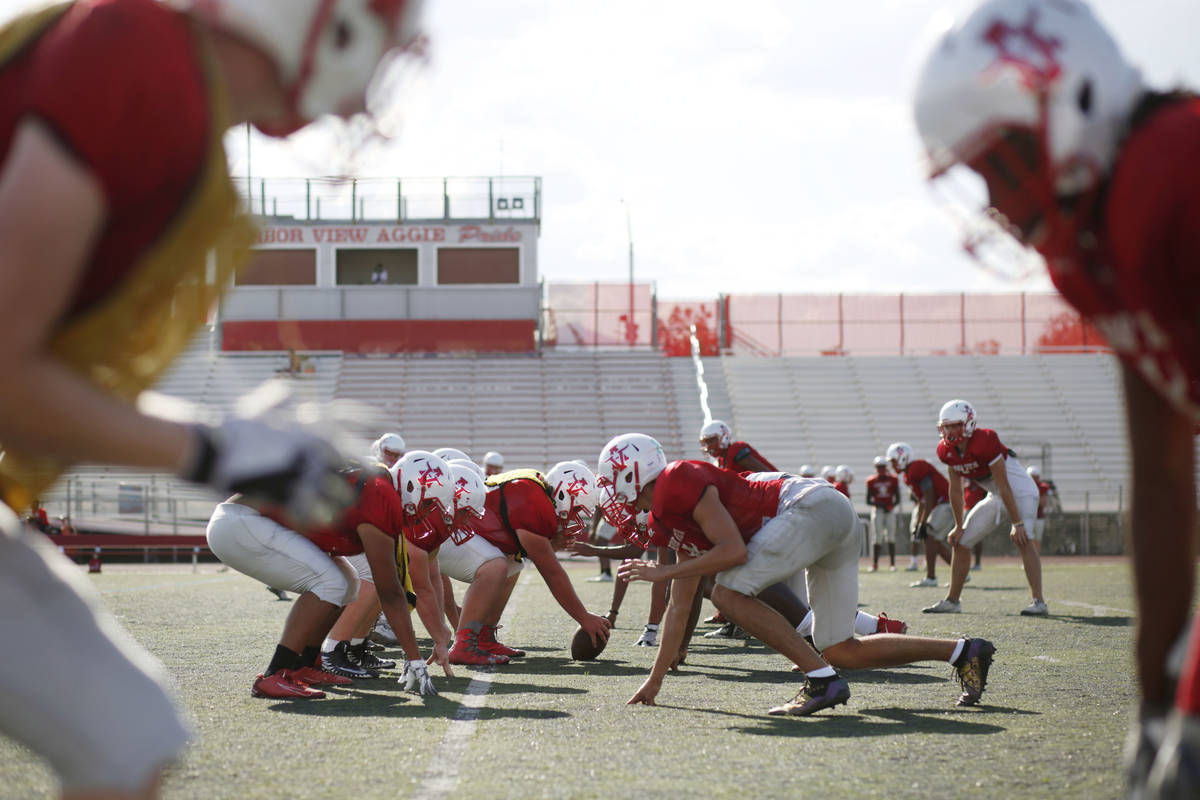 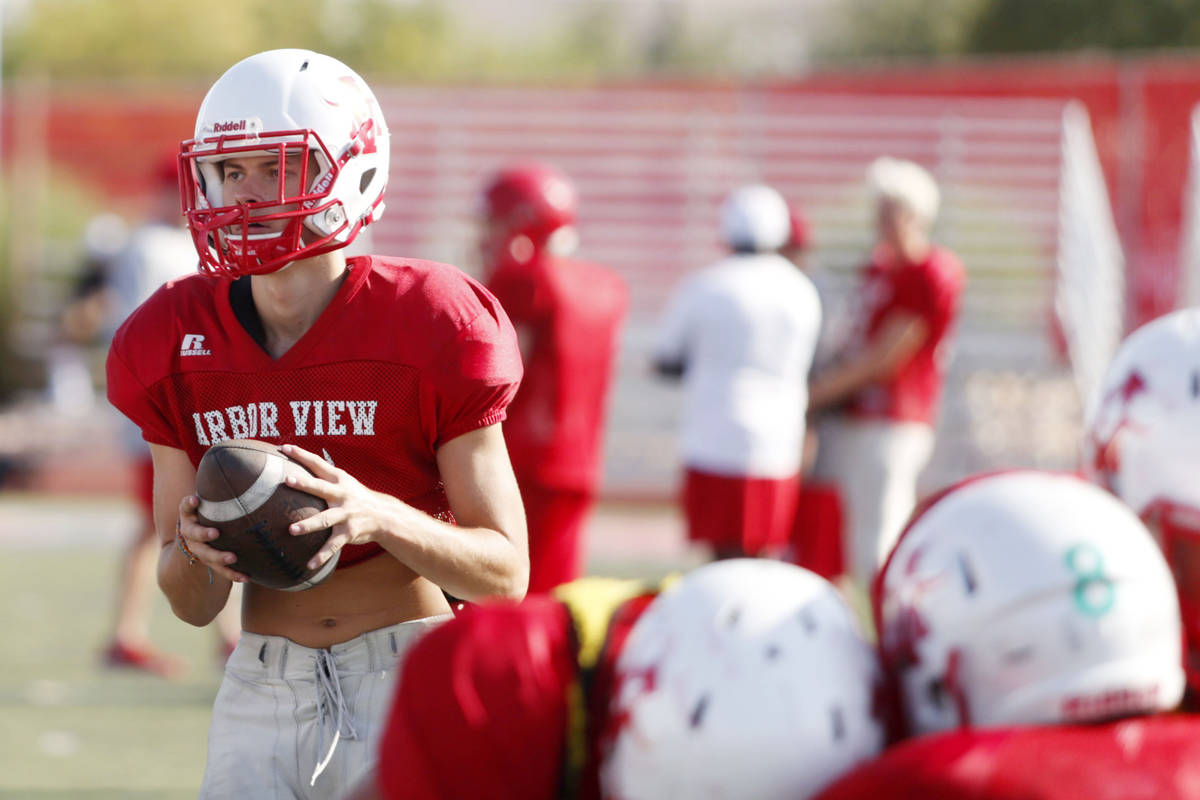 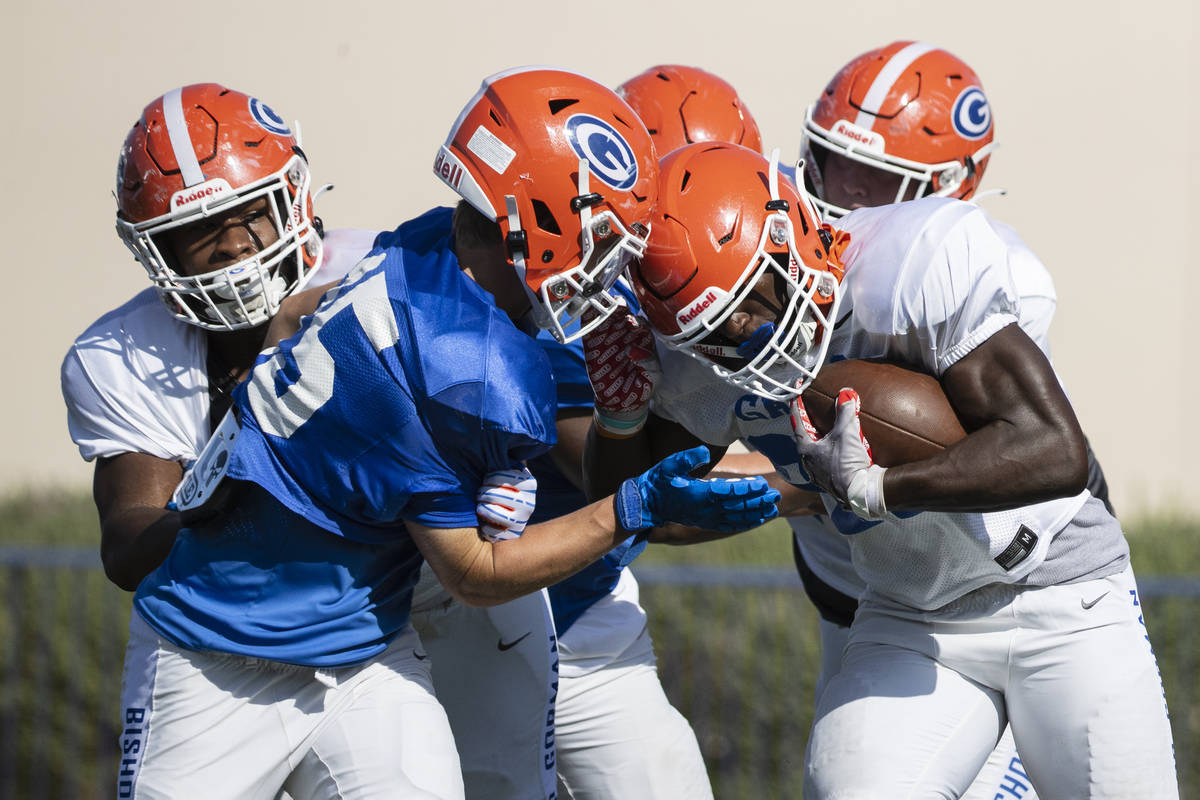 Playoffs: Lost to Desert Pines in the 4A Mountain Region semifinals

Breakdown: The Aggies will have about 50 varsity players, eight of whom are returning letter winners.

Quarterback Kyle Holmes is back to lead the offense after throwing for 851 yards and eight touchdowns in 2019. Wide receiver Kyri Shoels and D’Andre Washington, a running back, wide receiver, defensive back and kick returner, are experienced playmakers who will help Arbor View with its transition into the spread offense. Sophomore wide receiver David Washington is already drawing scholarship offers from all over the nation.

D’Andre Washington is also the Aggies’ leading returning tackler with 26, while linebacker Bryce Ericson had 14 tackles in 2019. Arbor View will be inexperienced in its front four on defense, so it will lean on veterans in the back seven.

Playoffs: Lost to Liberty in the 4A Desert Region final

Breakdown: The Gaels’ streak of 10 straight state championships ended in 2019, and they have been eagerly anticipating a chance to get back on top.

They have the talent to do so, with high-level recruits littered throughout both sides of the ball. According to 247Sports, Gorman has nine of the top 18 recruits in the state for the classes of 2022 and 2023.

Safety Zion Branch and defensive end Cyrus Moss lead the defense, while junior wide receiver Zachariah Branch, running back Cam Barfield and offensive lineman Jake Taylor should help make the offensive a play away from the end zone at all times. How sophomore quarterback Micah Alejado handles taking over the starting role could determine how far the Gaels go.

Playoffs: Disqualified after win over Arbor View in the 4A Mountain League quarterfinals for use of an ineligible player

Breakdown: The Pioneers rebounded from an 0-6 start to win their last three regular-season games, then beat Arbor View in the Mountain League quarterfinals. But their season ended abruptly when they were forced to forfeit all of their wins because of using an ineligible player.

Canyon Springs figures to be strong in the defensive front seven. Defensive end Ryan Henderson is the standout of that group. He has scholarship offers from five Mountain West schools.

The offense is young, and how quickly it comes together will likely decide whether the Pioneers can overcome stiff league competition and reach the postseason.

Playoffs: Lost to Liberty in the 4A Desert Region semifinals

Foothill’s defense has a pair of senior leaders at each level, in defensive linemen Leon Marshall and Jordyn Rivera, linebackers Carson McKee and Sterling Harnett, and defensive backs Amarion Meshack and Kellen Robertus.

Playoffs: Lost to Centennial in the 4A Mountain Region quarterfinals

Breakdown: The Longhorns lost five games in 2019, but none were by more than eight points. They appeared primed to make a splash in 2020 before COVID-19 wiped out the season.

New coach Monticelli is left with a young group trying to forge its own identity. Senior Montae Pate is expected to be a leader at wide receiver and defensive back, but the Longhorns will need young players to grow up fast to compete in a rugged league.

Playoffs: Lost to Centennial in the 4A Mountain Region semifinals

Breakdown: The Panthers posted a winning record for the first time in five seasons in 2019, thanks in large part to a punishing ground attack that churned out nearly 3,000 yards.

If Palo Verde wants to have similar success, it will be an entirely new group getting it done. None of the 12 Panthers who accounted for the rushing yardage is back. In fact, Luca Mauriello, who caught one pass for 29 yards in 2019, is the only returning skill player who contributed.

Defensive back Edward Rhambo is the Panthers’ top returner. He had 27 tackles and two interceptions in 2019.

Playoffs: Lost to Liberty in the 4A state championship game

Breakdown: The Bulldogs will start over after building the program to a run all the way to the state championship game.

Forshee expects Centennial to start as many as 17 underclassmen. The only offensive returner is Brandin Martinez, who ran for 51 yards in 2019. Sophomore Alonzo Balderrama takes over at quarterback, and junior wide receivers Dariusz Zeno and Ternilla Thomas, and senior offensive linemen Thomas Youshouck and Thomas Gili are expect to lead the offense.

Centennial’s strength defensively is on the back end, with outside linebackers Nicauri Shelton and Ali Kamara and defensive back Benjamin Hungerford. Brayden Bayne is arguably the top returning kicker in the valley after he was 3-for-4 on field goals and made 54 extra points in 2019.

Playoffs: Lost to Centennial in the 4A state semifinals

Breakdown: The Jaguars have been one of the premier programs in the valley, claiming two 3A state titles in 2016 and 2017 and advancing to the 4A state semifinals in 2019.

They have the luxury of a having proven performer at quarterback in Rjay Tagataese, who threw for 2,841 yards and 29 touchdowns with only three interceptions. Running back Jovantae Barnes is the valley’s only returning 1,000-yard rusher. He went for 1,022 and 13 touchdowns on only 126 carries and has scholarship offers from 35 schools.

Jett Solomon is back at wide receiver after catching 18 passes for 239 yards. He’ll also help spearhead the defensive backfield. Defensive end Idgerinn Dean is also expected to be a difference-maker.

Playoffs: Lost to Desert Pines in the 4A Mountain League quarterfinals

Breakdown: The Crusaders had a chance to play in the spring and won three games against Class 3A competition. They also saw how far they have to go to be a state contender in a 43-0 loss to Bishop Gorman.

Faith Lutheran has a nice mix of size and speed, with Vili Fetapai, a 320-pounder leading the offensive line, and Jordan Pollard stepping in at running back to add to his linebacking duties. Pollard made the most of the short spring season with 39 tackles, six sacks and an interception.

Playoffs: Lost to Bishop Gorman in the 4A Desert League semifinals

Breakdown: The Gators have only had one losing season during Castro’s tenure, a consistent run they hope to continue.

It won’t be easy in the new 5A, as every team in its league but one won at least one playoff game in 2019. Green Valley is expecting a breakout season from running back Jaylen McKnight, who ran for 102 yards and a touchdown on 22 carries as a sophomore.

He’ll be helped by an offensive line led by Harrison Nielson. The defense will be almost completely retooled, but defensive end Cole Castro should be a leader up front in addition to his tight end duties.

Playoffs: Defeated Centennial to win the 4A state championship

Breakdown: The Patriots ended Bishop Gorman’s 10-year reign atop the state, and they’re hoping to stay there.

Transfer quarterback Jayden Maiava, a UNLV commit, should help after he threw for 3,317 yards and 41 touchdowns as a sophomore for Kaimuki High in Hawaii in 2019.

He’ll have help from wide receiver Germie Bernard, a Washington commit with 948 yards and 14 touchdowns receiving as a sophomore in 2019. Offensive lineman Jesse Wilson also started on the Patriots’ title team.