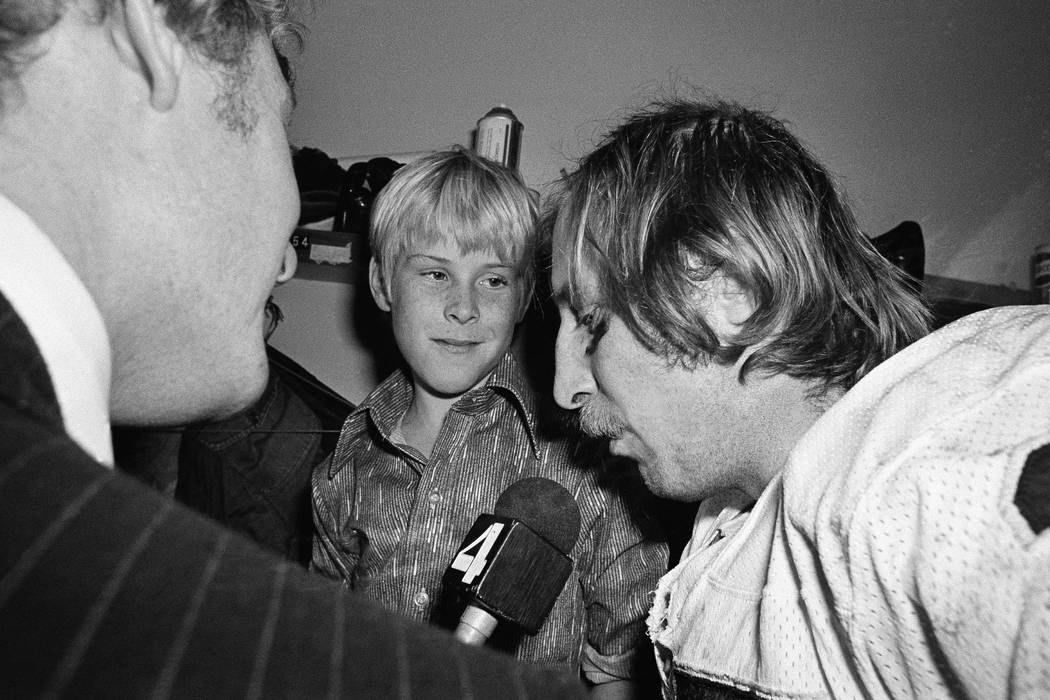 Ten-year-old Fred Biletnikoff Jr., center, looks in admiration at his father, one of the stars of the Oakland Raiders, right, after their 32-14 victory over Minnesota in the Super Bowl, Jan. 10, 1977, Pasadena, Calif. They stand in the teams dressing room. Wide receiver Biletnikoff was the games leading receiver with 79 yards. (AP Photo)

He has coached at the professional, college, international and high school levels, and his name is synonymous with football.

And Fred Biletnikoff Jr. is hoping to bring success and stability to Coronado High’s football team.

The son of the Oakland Raiders’ legendary wide receiver and Pro Football Hall of Famer is the new head coach of the Cougars.

“I feel like the most fortunate man in the world,” said Biletnikoff, 53. “The next time I step on the field, it will be the 31st team I’ve coached. You always have that passion to work with young men and helping kids get to where they want to get.”

Biletnikoff, who also serves as a wide receivers coach for USA Football, moved to Las Vegas in August to take a teaching and advanced placement coordinator position at Henderson International School. He teaches physical education and this year taught physiology and anatomy to members of Findlay Prep’s basketball team.

He began helping the Cougars in the spring after being encouraged by Coronado supporters to share his knowledge.

“I am very grateful to the administration at Henderson International for letting me take on this job,” Biletnikoff said.

He brings a lot of experience to Coronado, having coached for the Spokane Shock of the Arena Football League and the Central Valley Coyotes in the Arena2 Football League. He was the head coach and director of operations for the Coyotes.

“I’ve coached in almost 330 games, a lot of those were games that are win or you might lose your job,” Biletnikoff said. “I feel like I bring the ability to prepare kids for competition on Friday nights and the ability to help these kids if they choose to go on. I think I’ll be able to open doors for these kids.”

“His whole push to us was about building a program and building kids up,” Coronado athletic director Tyrel Cooper said. “He told us he has called the winning or losing play with 10 seconds left in a game and 50,000 people in the bleachers, but what matters most is developing kids and helping them grow.”

Biletnikoff replaces Terry Riddle, who went 4-6 in one season as coach.

Coronado has had four straight losing seasons and two winning seasons since 2007. The Cougars haven’t qualified for the postseason since 2015.

Biletnikoff will be the Cougars’ seventh head coach since the start of the 2008 season.

“We really like it here,” Biletnikoff said. “The community has been great. We can see ourselves being here for a long time. I can see myself doing this for a number of years.”