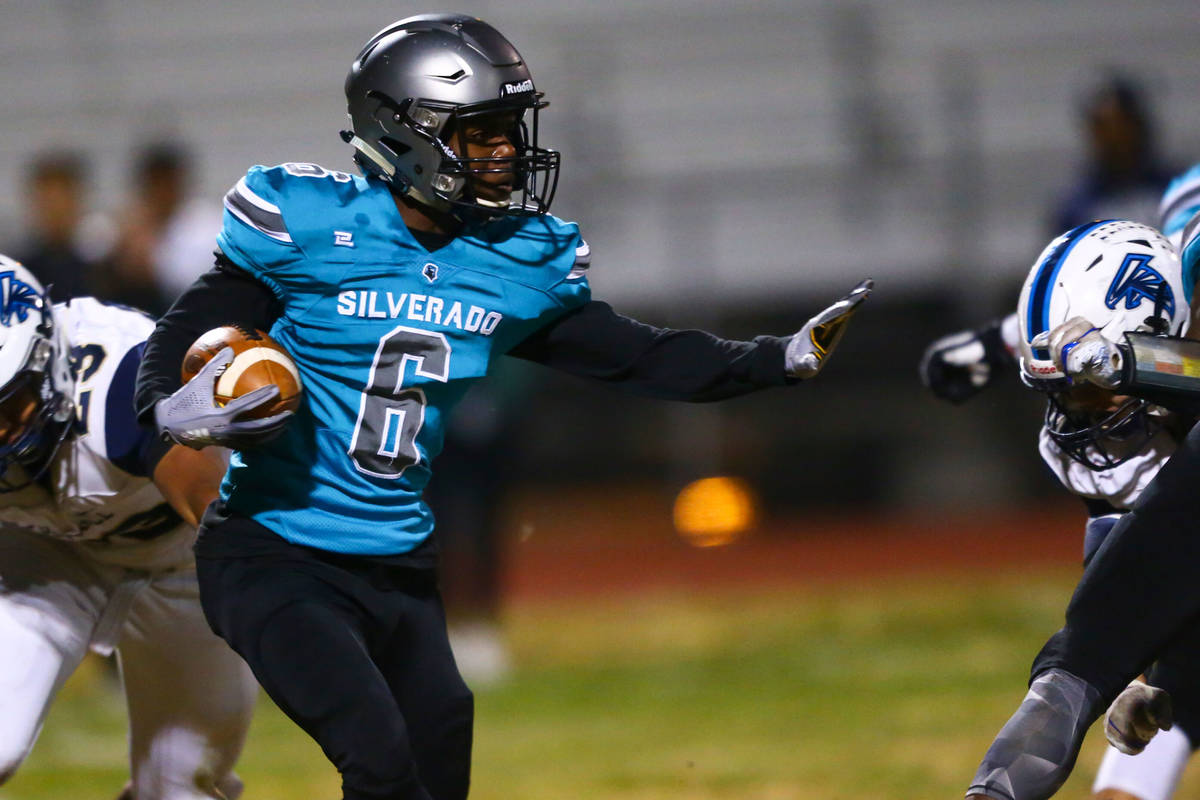 Silverado's John Agounke (6) runs the ball against Foothill during the first half of a 4A Desert Region football playoff game at Silverado High School in Las Vegas on Friday, Nov. 8, 2019. (Chase Stevens/Las Vegas Review-Journal) @csstevensphoto

Gov. Steve Sisolak’s announcement Wednesday that football can be played in Nevada this spring set off a flurry of mixed emotions — even for coaches whose teams will be allowed on the field.

While they were overjoyed for their players, they lamented that Clark County School District schools won’t be allowed to join them.

“We’re not like, great for us, too bad for you,” Bishop Gorman first-year coach Brent Browner said. “We really feel for them. Being part of the Southern Nevada Football Coaches Association, I have seen that these coaches really care about their players. They want to do something for them, and they understand how important football is for their players’ developmentally. It’s not just a game.”

CCSD is the only district of the 17 in Nevada that has opted out of the fall sports season, scheduled to begin March 4.

CCSD Superintendent Jesus Jara released a statement Wednesday night after Sisolak lifted the ban: “We are currently reviewing the governor’s directives and will provide more details regarding additional grade levels and extracurricular activities in the near future.”

Jara has made it clear high school athletics will not resume until students are back in the classroom. Prekindergarten through third grade are scheduled to return March 1, but there is no timetable for other grades to return.

The CCSD school board will have its next meeting Thursday at the Las Vegas Academy for Arts High School, but there is no agenda item that addresses older students returning to school or extracurricular activities.

The Review-Journal requested an interview with Jara on Thursday afternoon and was told that he was in a meeting and not available for comment. A phone call to CCSD executive athletic director Pam Sloan was not returned. CCSD athletic director Tim Jackson in a text message referred all requests for comment to the district’s communications staff.

NIAA assistant director Donnie Nelson said if the CCSD was to reverse course and try to opt back into the fall sports season, it might not be that simple.

“There are a number of things that would have to be put back in place before starting up again,” Nelson said in a text message. “Could be quick or could take a while.”

Moapa Valley is the only CCSD school allowed to play fall sports because it has been in a hybrid learning model since the beginning of the school year. Virgin Valley has also submitted a return-to-school proposal to the CCSD that could allow it to compete in fall sports if approved in time.

“It’s been a long time coming,” Moapa Valley football coach Brent Lewis said of Sisolak’s announcement. “We’re super stoked and excited to have the season. We know we’re pretty much the only CCSD school that gets to do it, and we know it’s largely because of the school’s efforts in fighting to get us back in school last fall.”

Faith Lutheran first-year coach Mike Sanford said Thursday the Crusaders have adjusted their practice routine to fit within COVID-19 guidelines and would be “starting in helmets today.”

Faith Lutheran and Gorman are the only Class 5A schools in Southern Nevada that will play football. They will be joined by 3A schools Moapa Valley, Pahrump Valley and SLAM! Nevada. The others that could compete are 2A and 1A schools.

That sets up some interesting matchups, such as Lewis pointing out his Moapa Valley team is scheduled to meet Gorman, the state’s pre-eminent program that won 10 straight state championships before having that run ended by Liberty in 2019.

“We’ve always had the ‘We’ll play anybody, anytime’ attitude,” Lewis said. “The kids see Bishop Gorman on the schedule, and it’s not normal. But it gets our kids exposure. Sure, it’s a challenge, and it ends up being a David vs. Goliath situation, but we’re going to take full advantage of the situation of being able to play.”