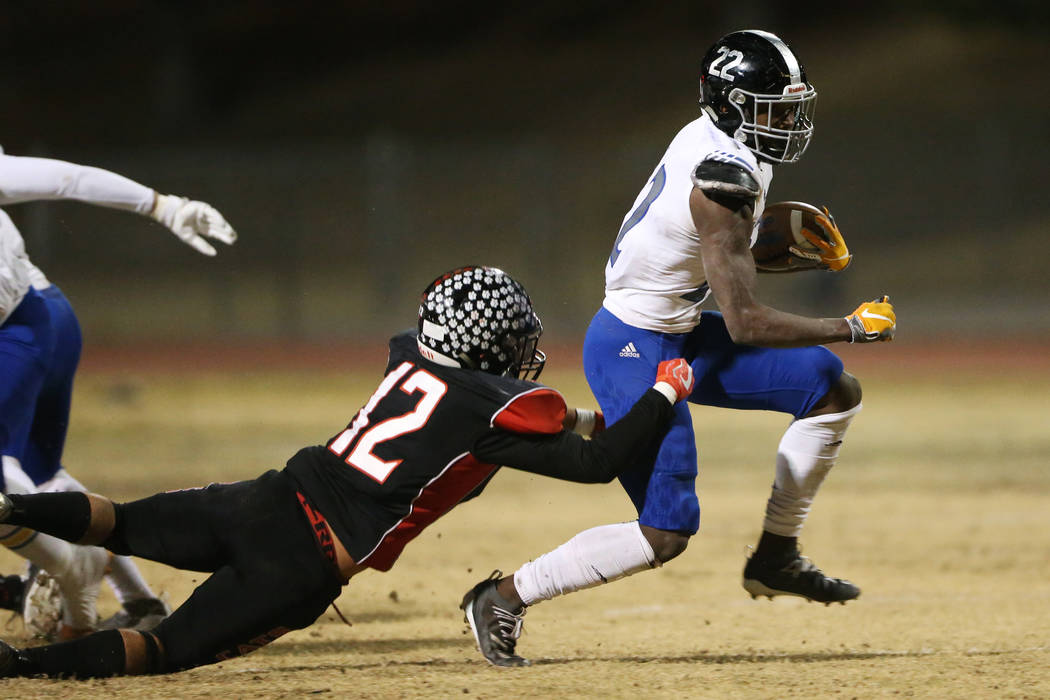 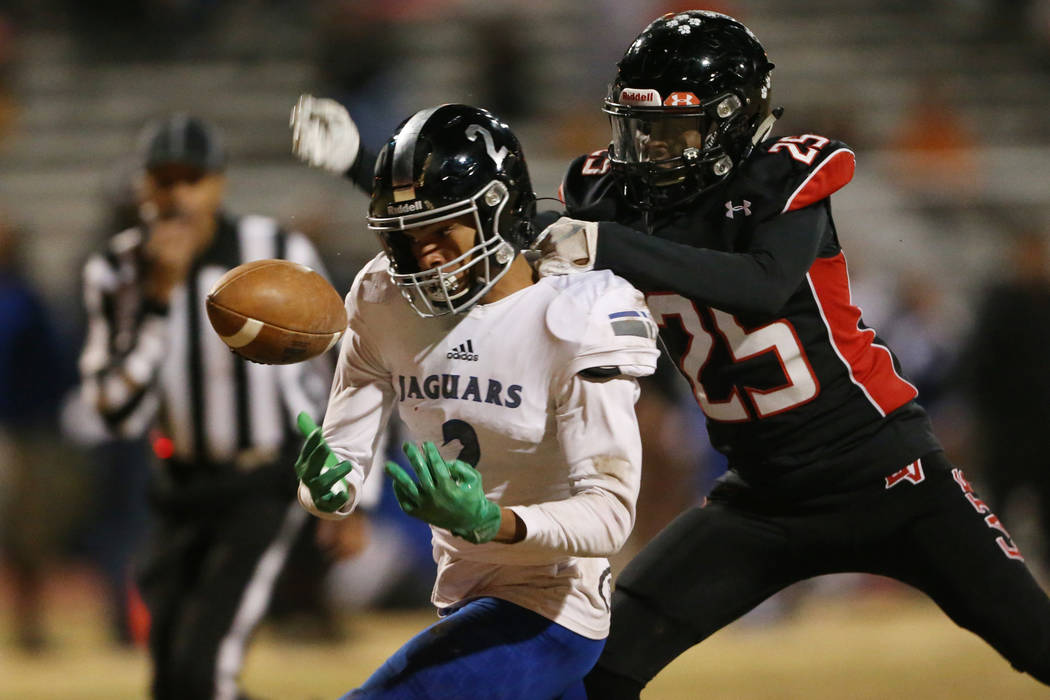 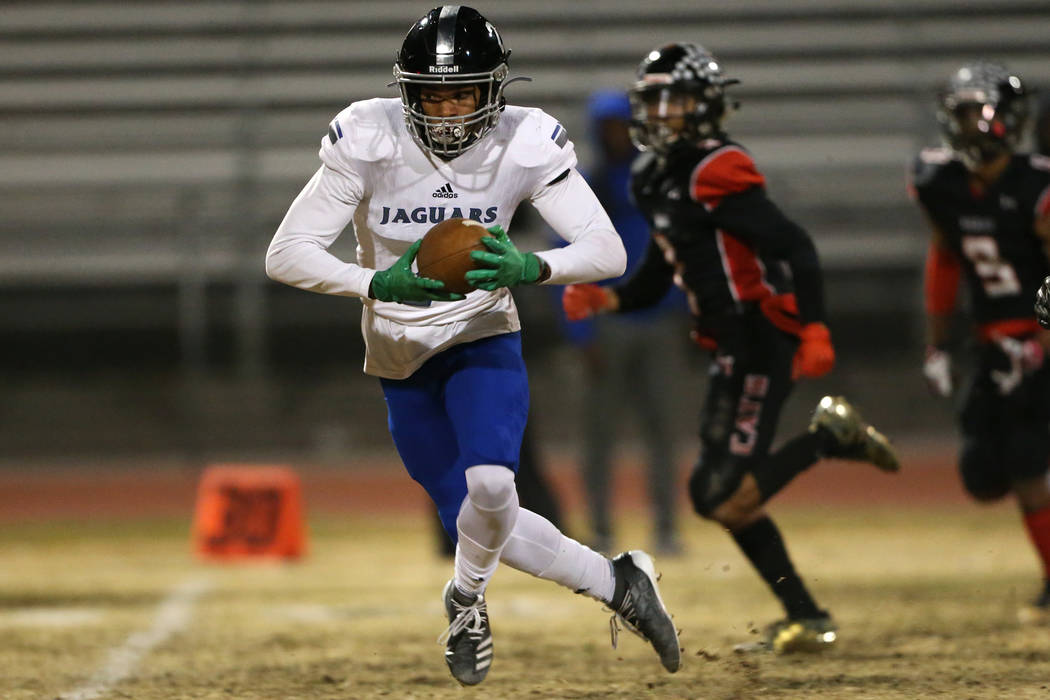 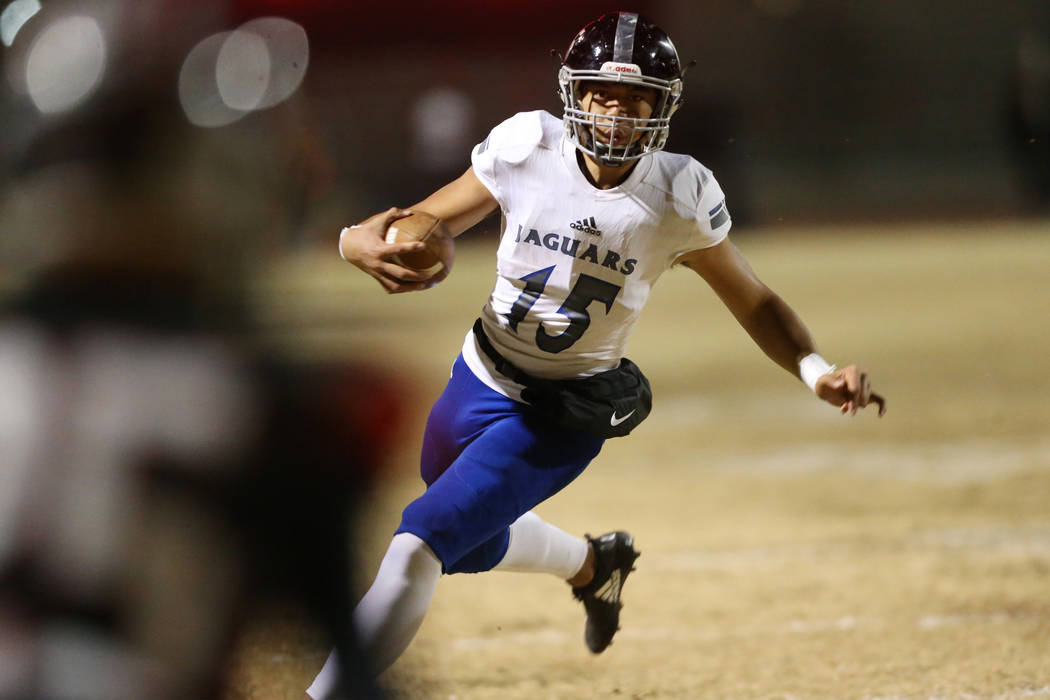 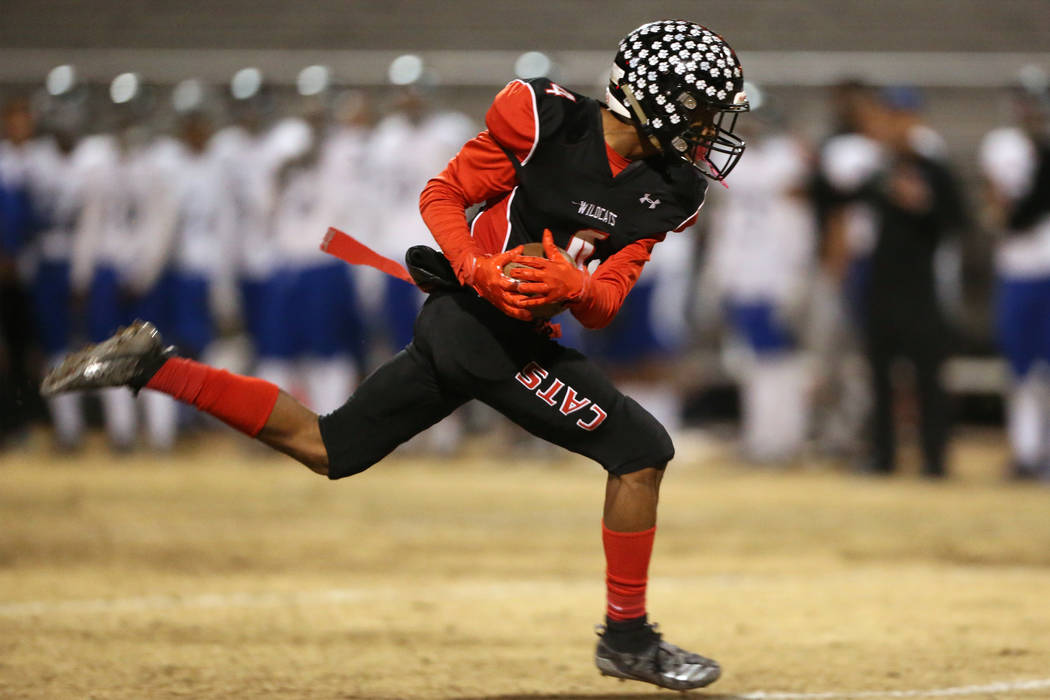 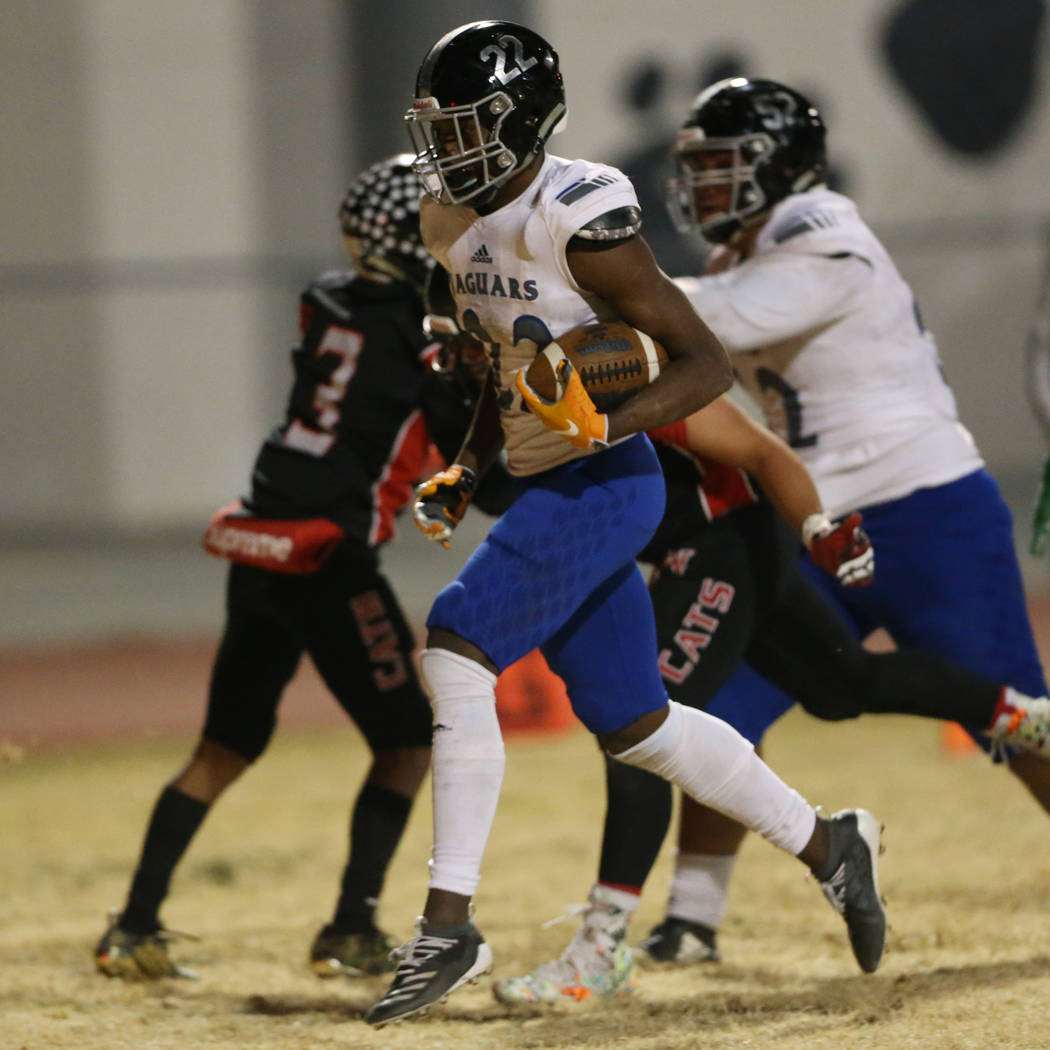 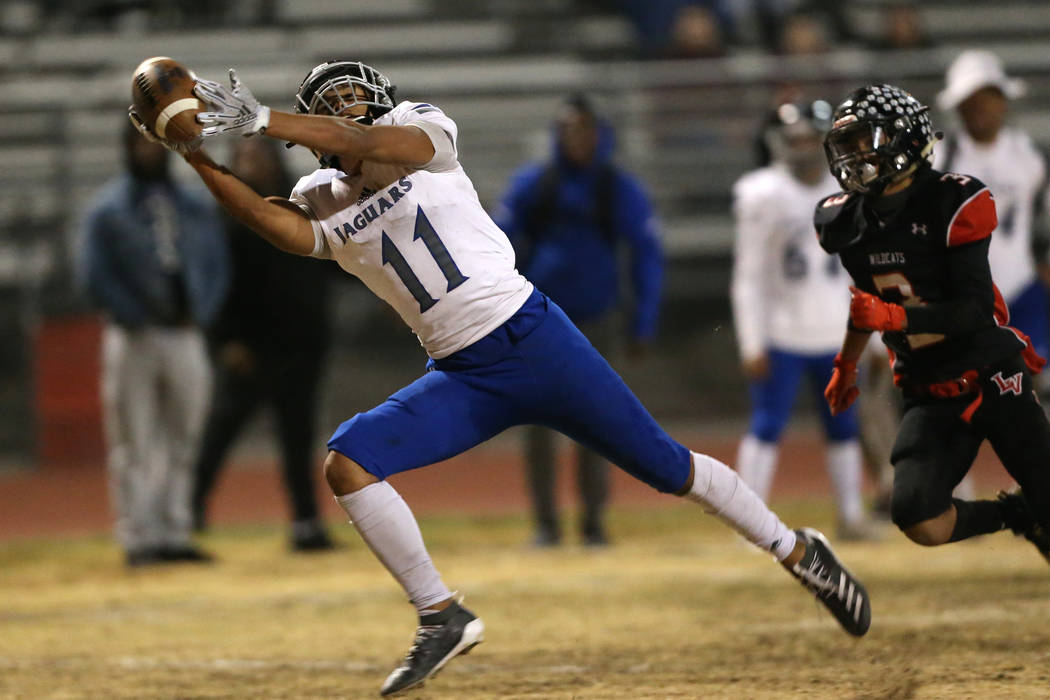 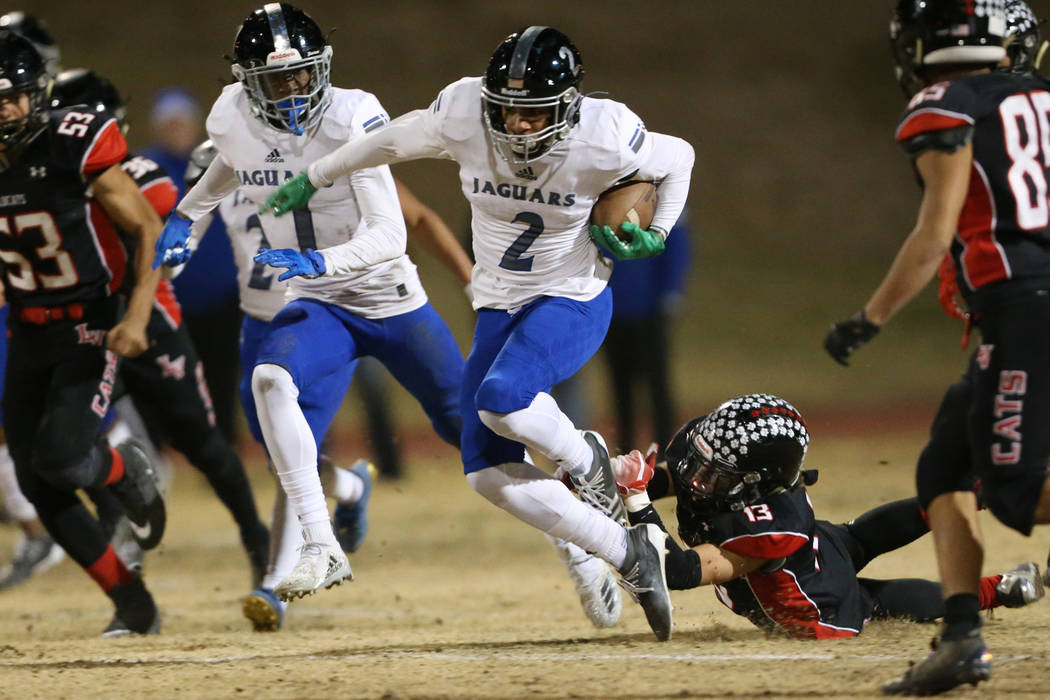 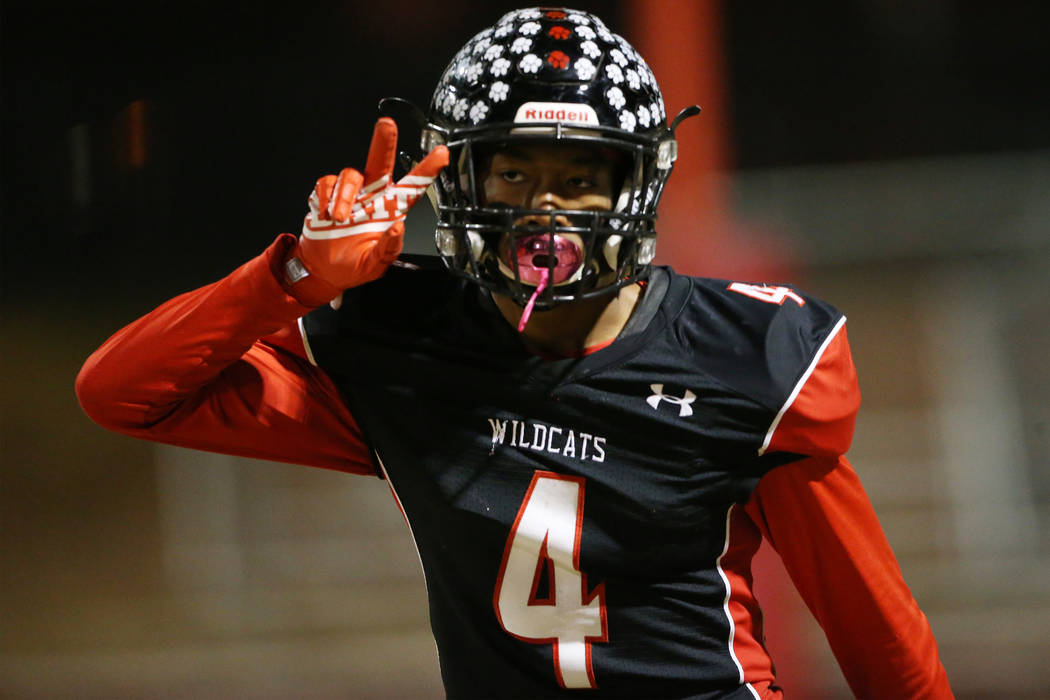 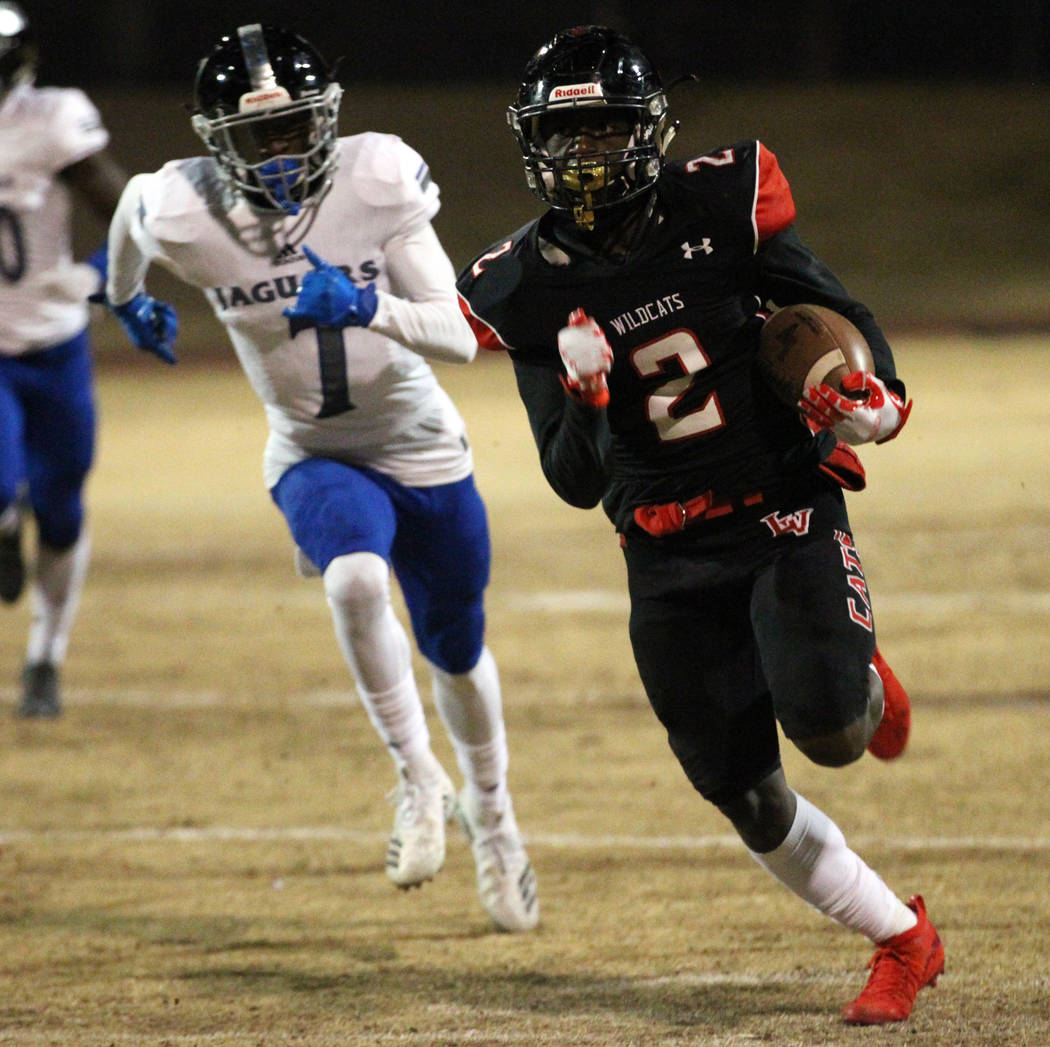 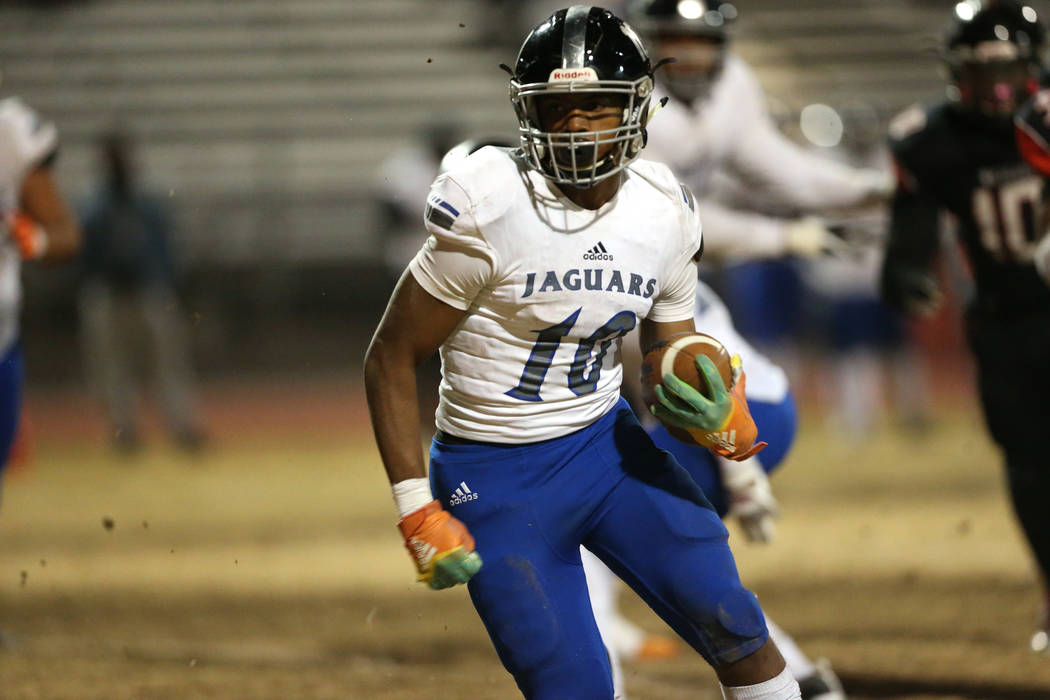 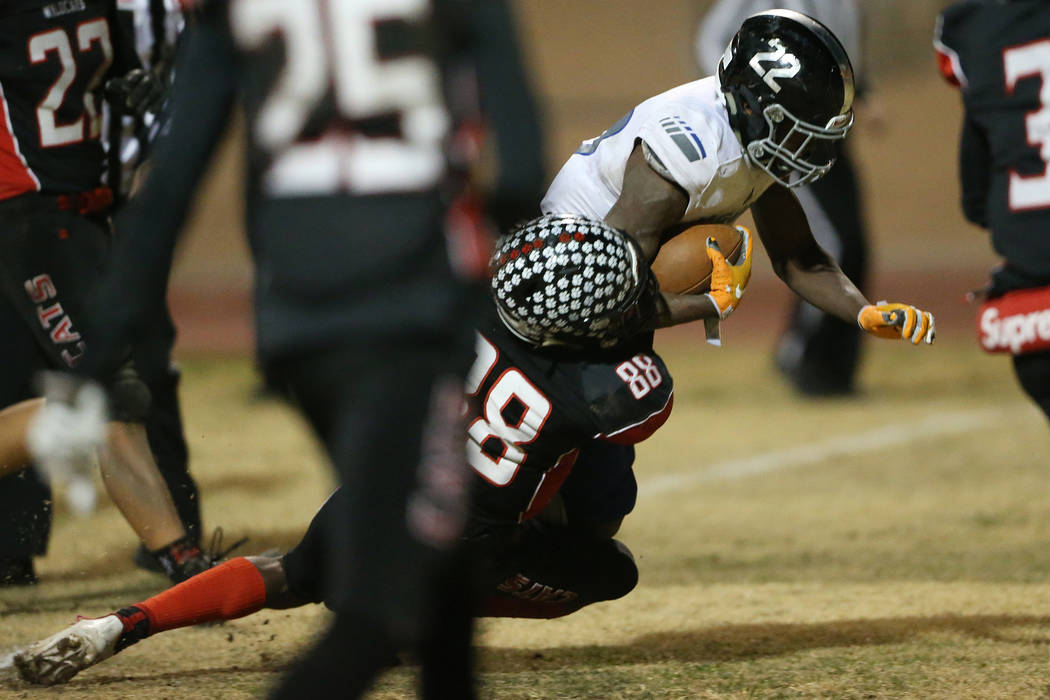 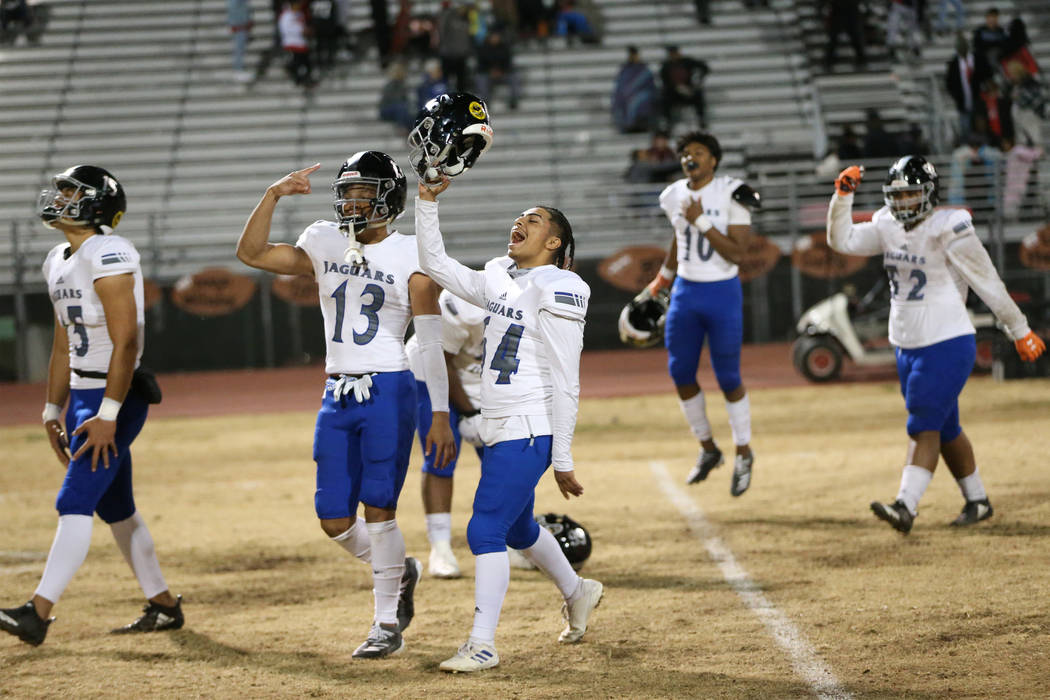 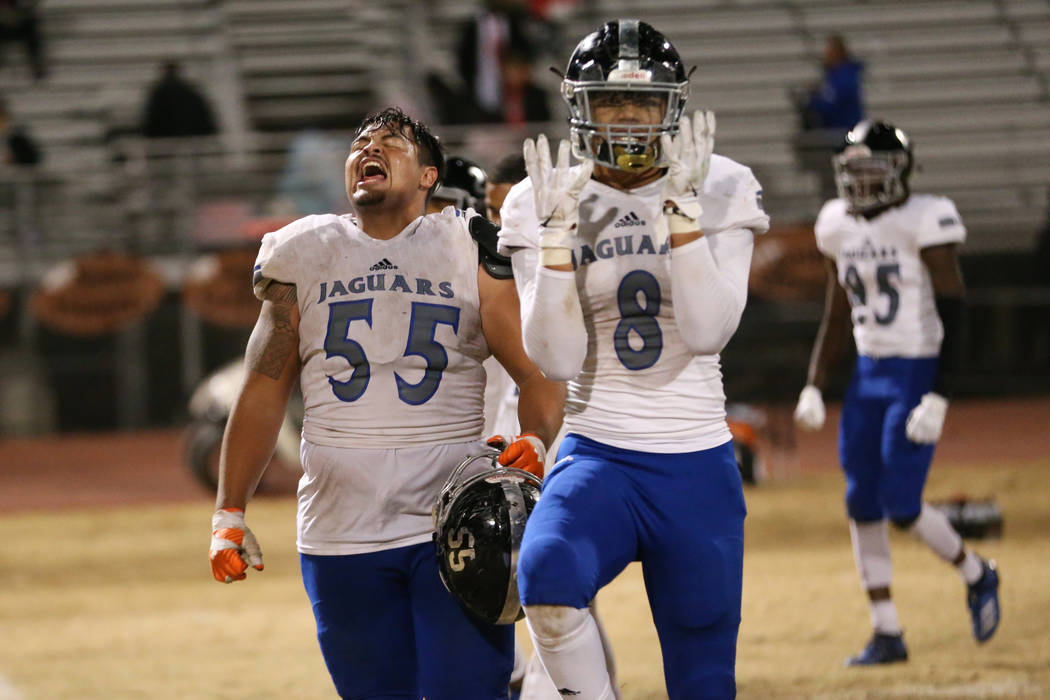 The much-anticipated battle between unbeatens Desert Pines and Las Vegas lived up to its billing — for a half.

The teams went into the locker room for halftime tied at 21, but it was all Desert Pines after that Friday night at Las Vegas High.

Jovante Barnes rushed for 204 yards and four touchdowns, Rjay Tagataese threw for 309 yards and a score, and the Jaguars defense allowed one first down in the second half of a 42-21 victory to claim the Northeast League title and No. 1 seed for the playoffs.

“From the beginning of the season we had three goals,” Desert Pines lineman Blaze Homalon said. “We had to go 1-0, win the division and win state. We’re two out of three right now.”

The Jaguars (8-0, 4-0 Northeast) will look to finish an undefeated regular season next week with a home game against Eldorado.

It was the young guys who took over. Barnes and Tagataese are sophomores, freshman Deandre Moore caught six passes for 127 yards and a touchdown, and sophomore Jett Solomon added four catches for 100 yards.

“When you’ve got kids like Michael Jackson, Deandre Moore and Jett Solomon, that’s a very talented and young corps of receivers,” Rodriguez said. “Our quarterback is a super special kid. We have weapons, and when one guy isn’t there, we pick up the slack.”

It was a back-and-forth game throughout the first half, with neither team leading by more than one score. The Jaguars received the second-half kickoff and went right to work, mostly through the air.

Tagataese, who missed only one of his final 12 attempts, hit throws of 19 and 31 yards to Solomon. The latter of those set up a 2-yard plunge for Barnes to break the 21-21 tie.

The Jaguars’ next march took almost seven minutes and ended with a 9-yard rushing touchdown from Malik Brooks before Barnes put the game away for good with a 7-yard TD run with 6:26 left. The Jaguars rolled up 619 yards of total offense.

“We wanted to be physical in running the ball,” Rodriguez said. “They’re a light team, so we wanted to take advantage of that. We did, and it kept us balance and kept the chains reasonable, third-and-4 or third-and-5.”

Ja’Shawn Scroggins threw for 244 of his 267 yards and all three of his touchdowns in the first half for Las Vegas (8-1, 3-1). Victory David caught five passes for 118 yards, including a 44-yard TD, Miles Davis grabbed a 57-yard score on the third play from scrimmage, and Jaelin Gray’s 3-yard TD reception tied the score with eight seconds left before halftime.

The Wildcats, who will be the Northeast’s No. 2 seed in the playoffs, finished with minus-8 yards rushing, and they’ll close the regular season on the road against winless Mojave.

“They made a few adjustments. They didn’t want to allow the deep ball, so they started dropping guys,” Las Vegas coach Erick Capetillo said. “We made a few mistakes in the second half that hindered us, especially with keeping drives alive. If you don’t keep the chains moving, your defense is on the field a lot.”