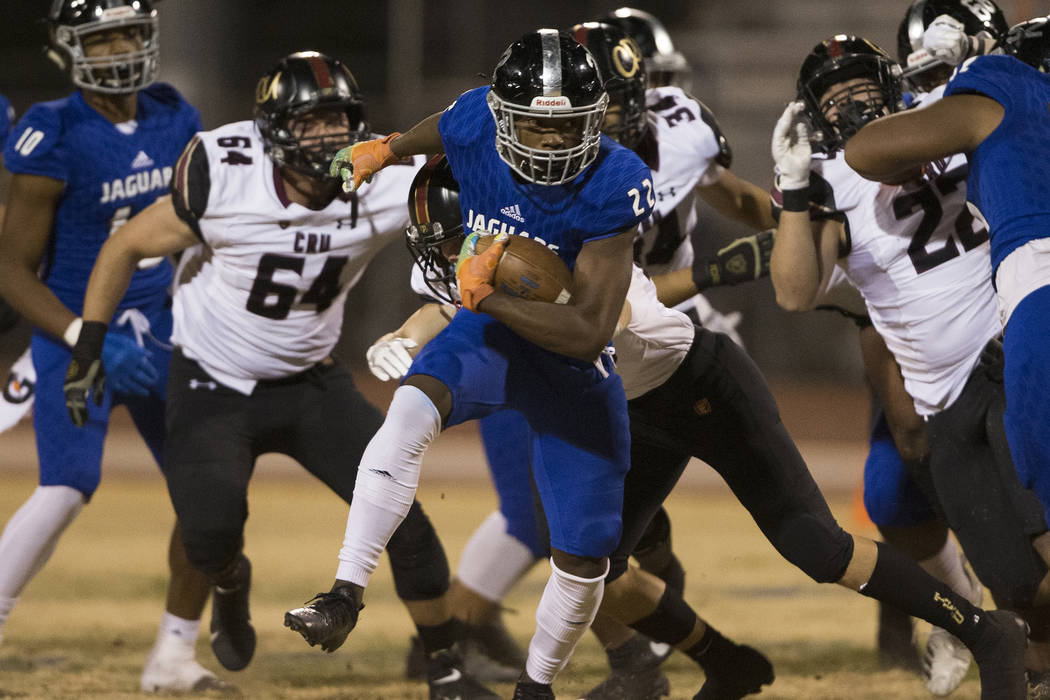 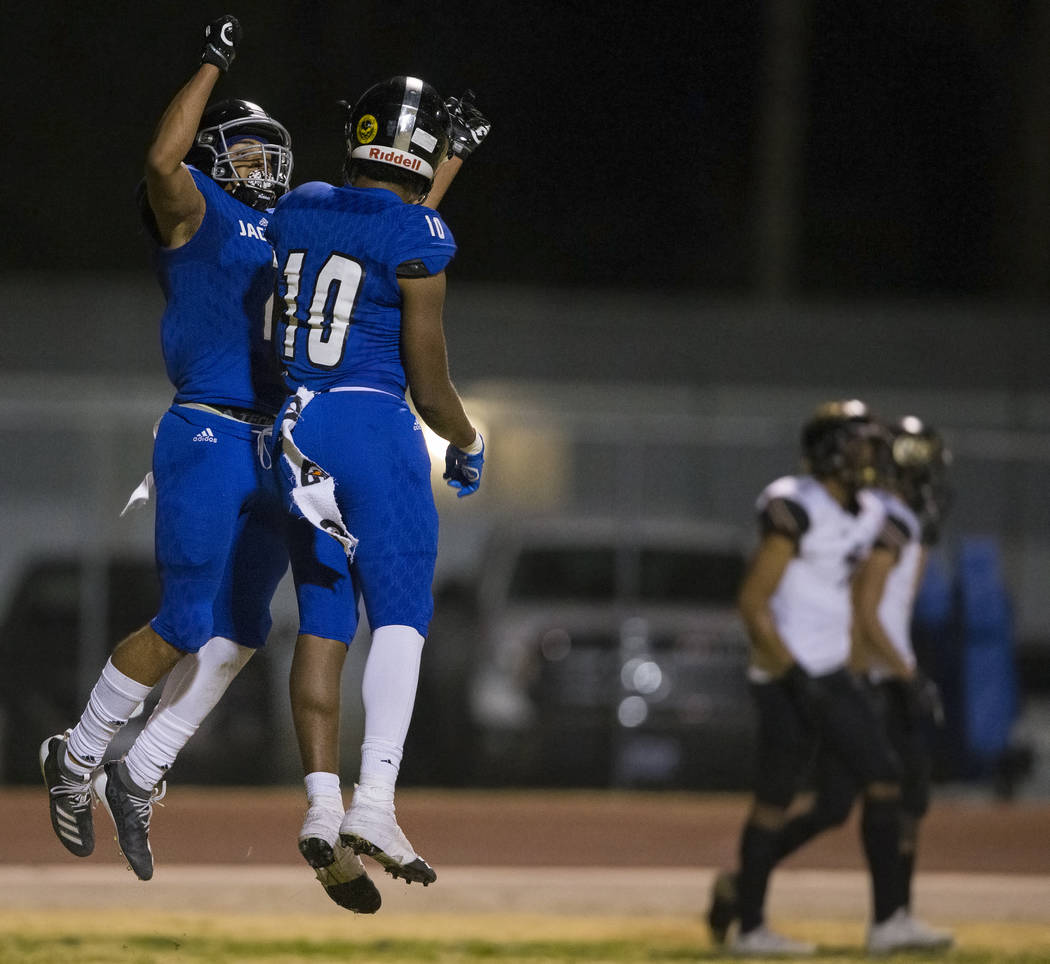 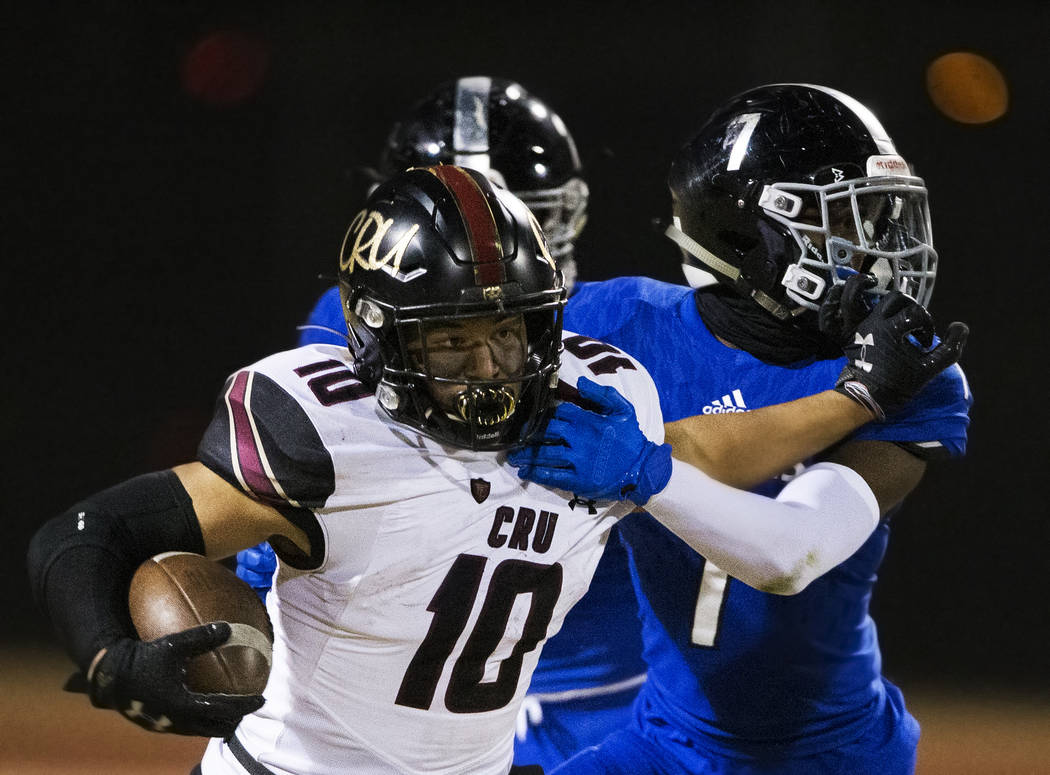 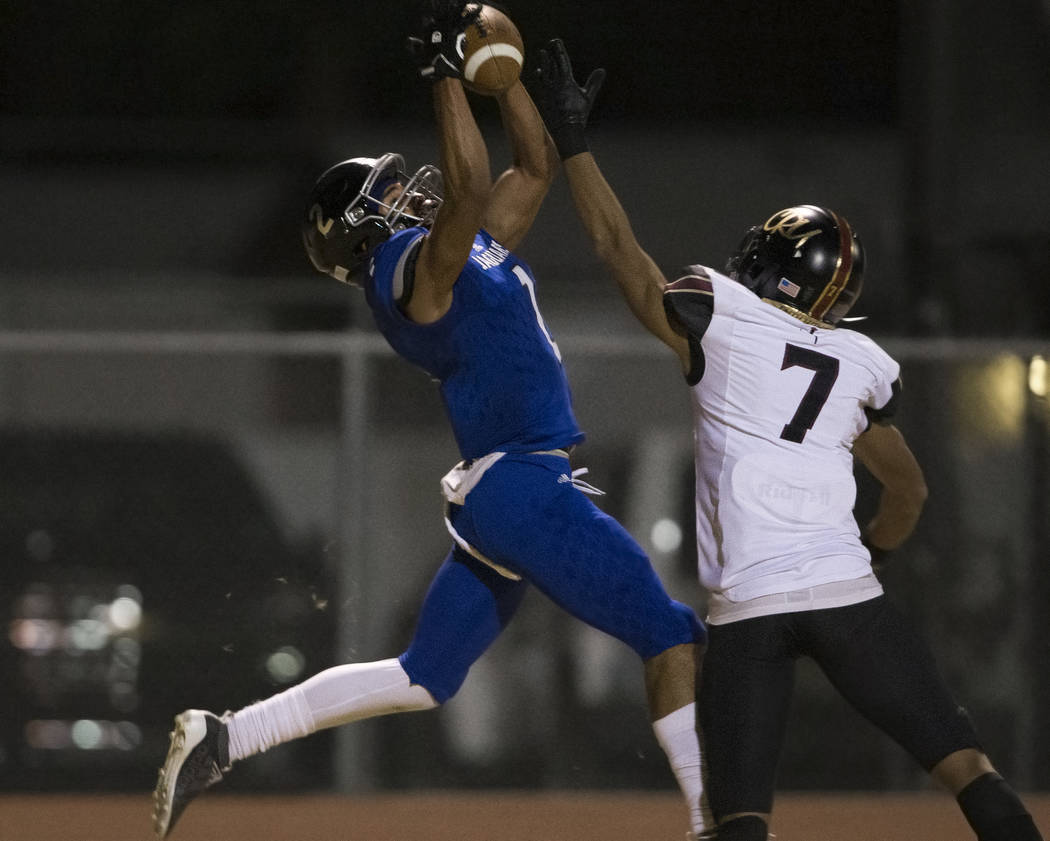 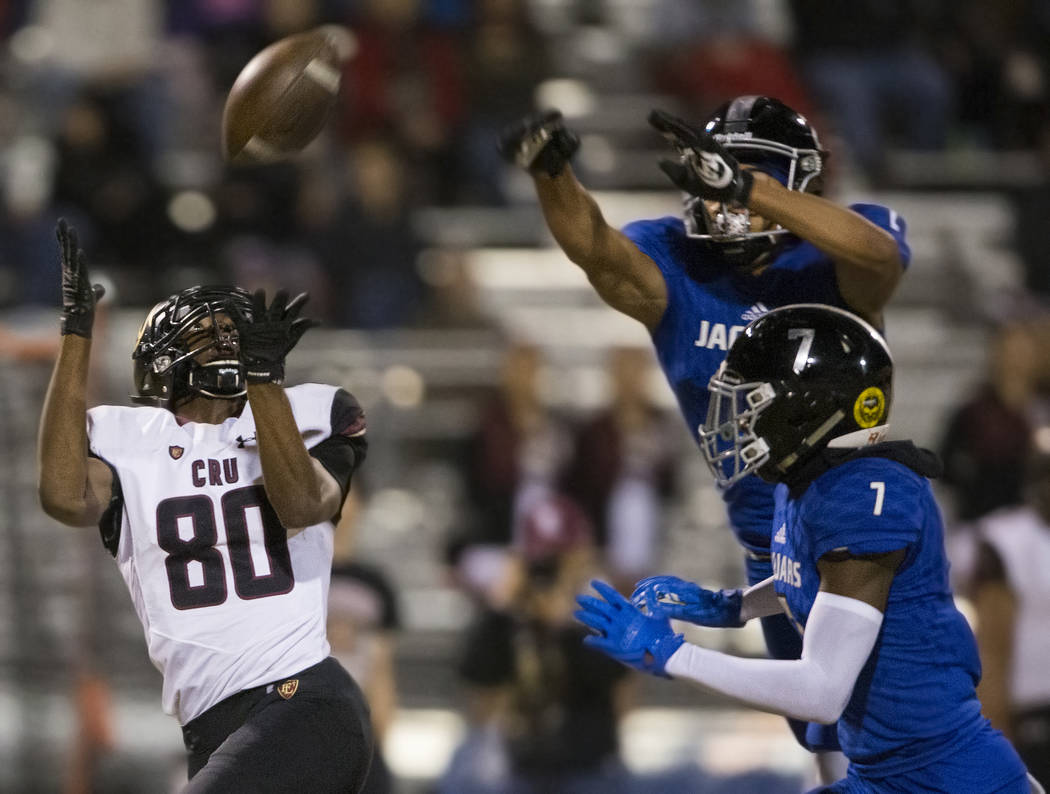 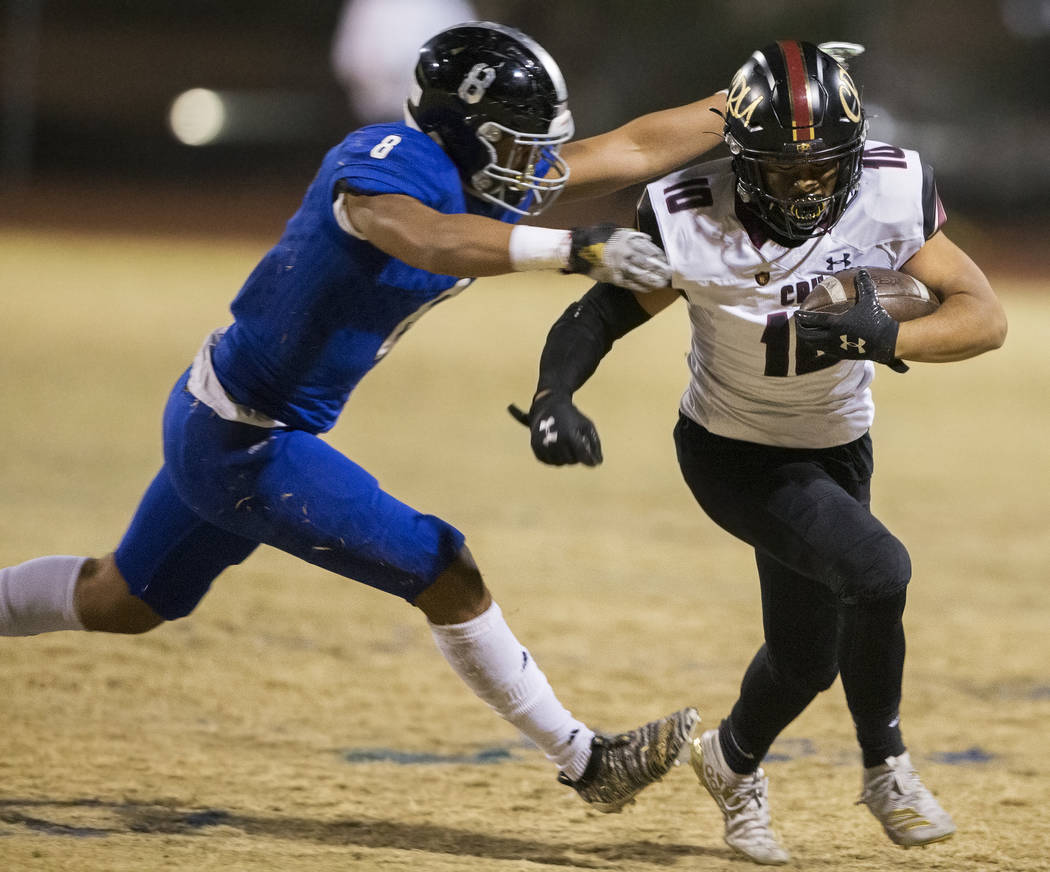 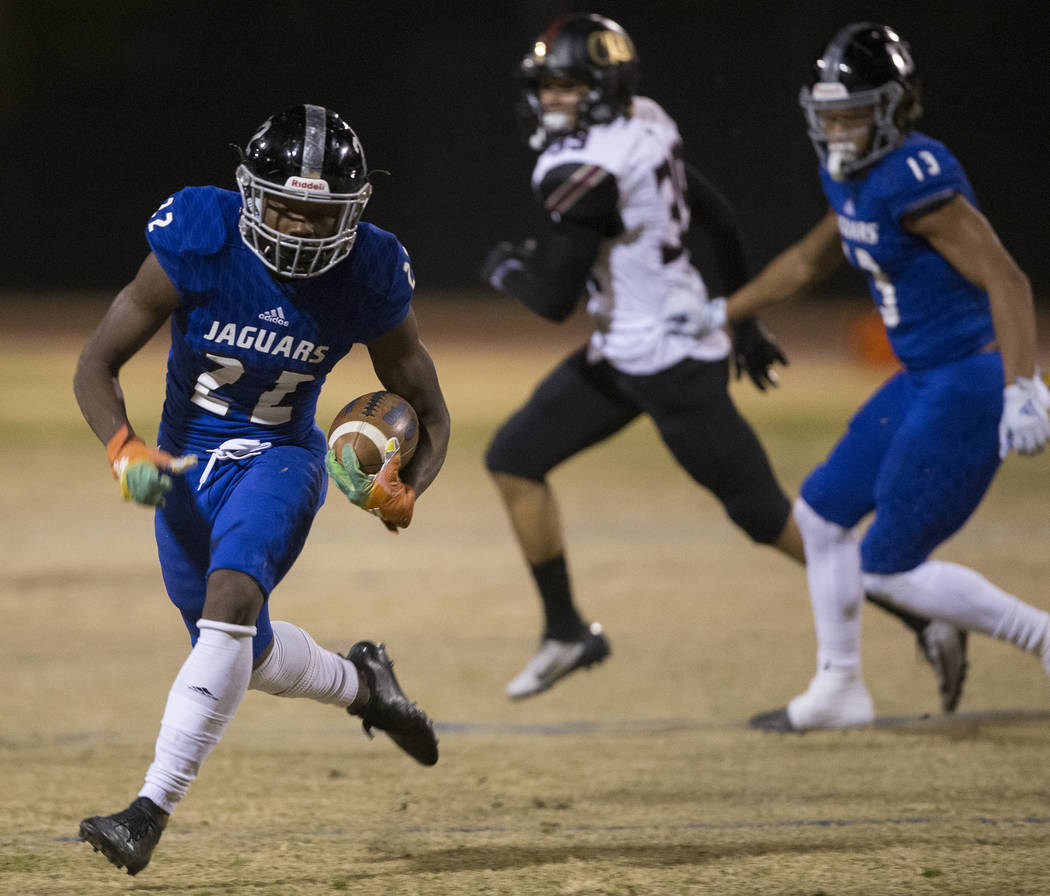 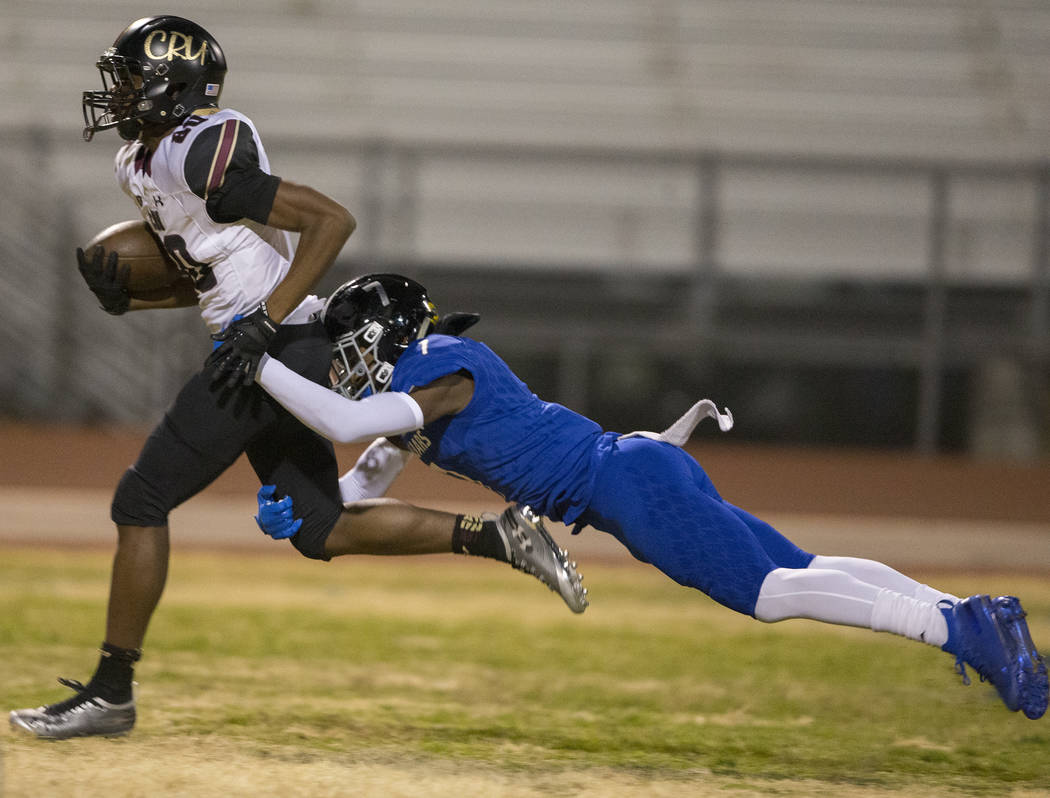 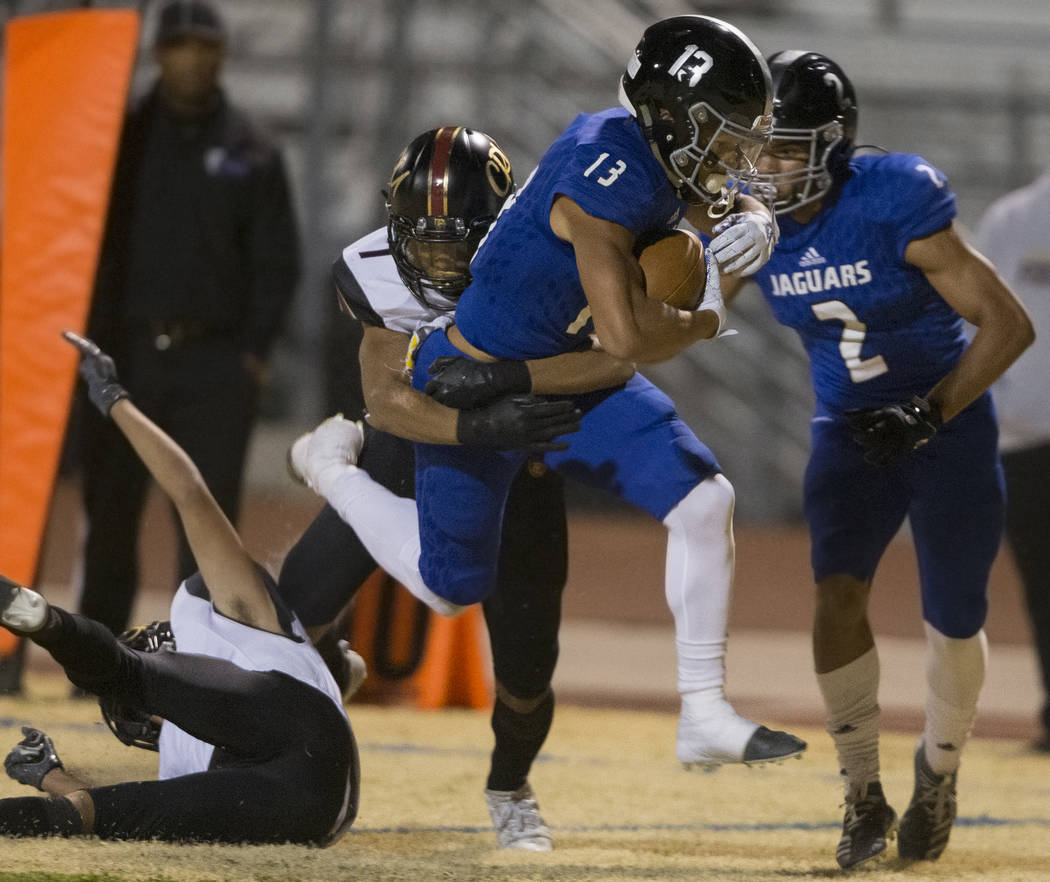 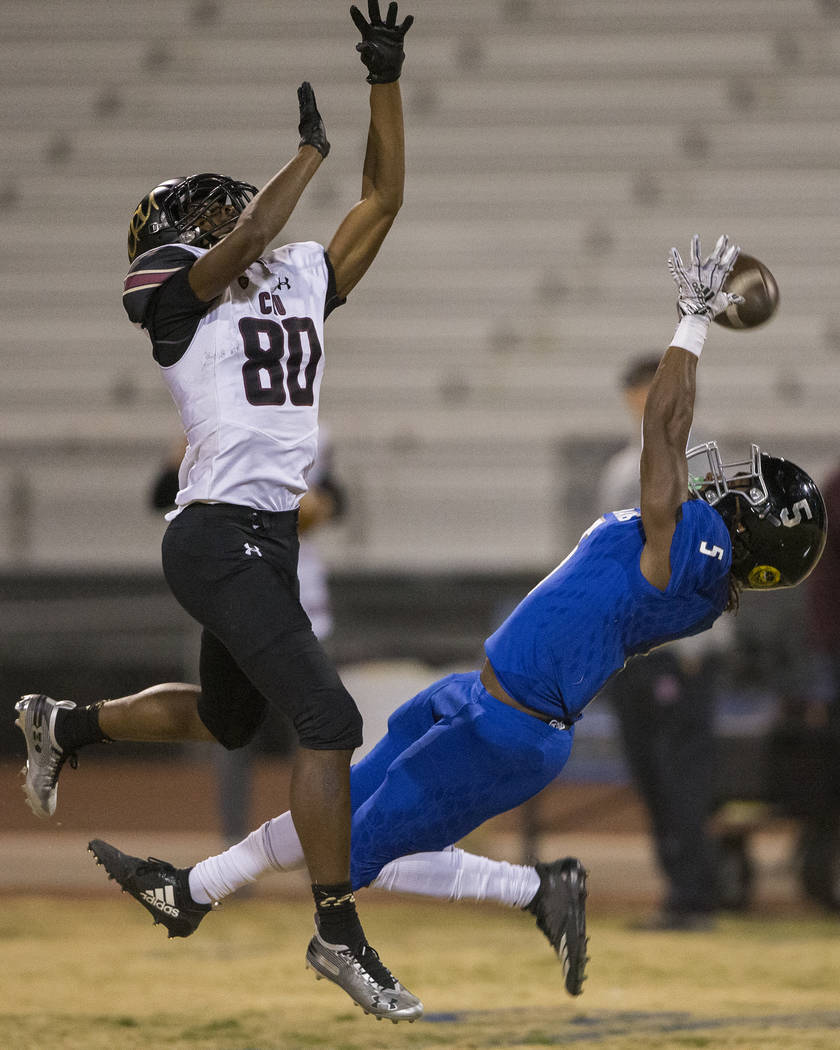 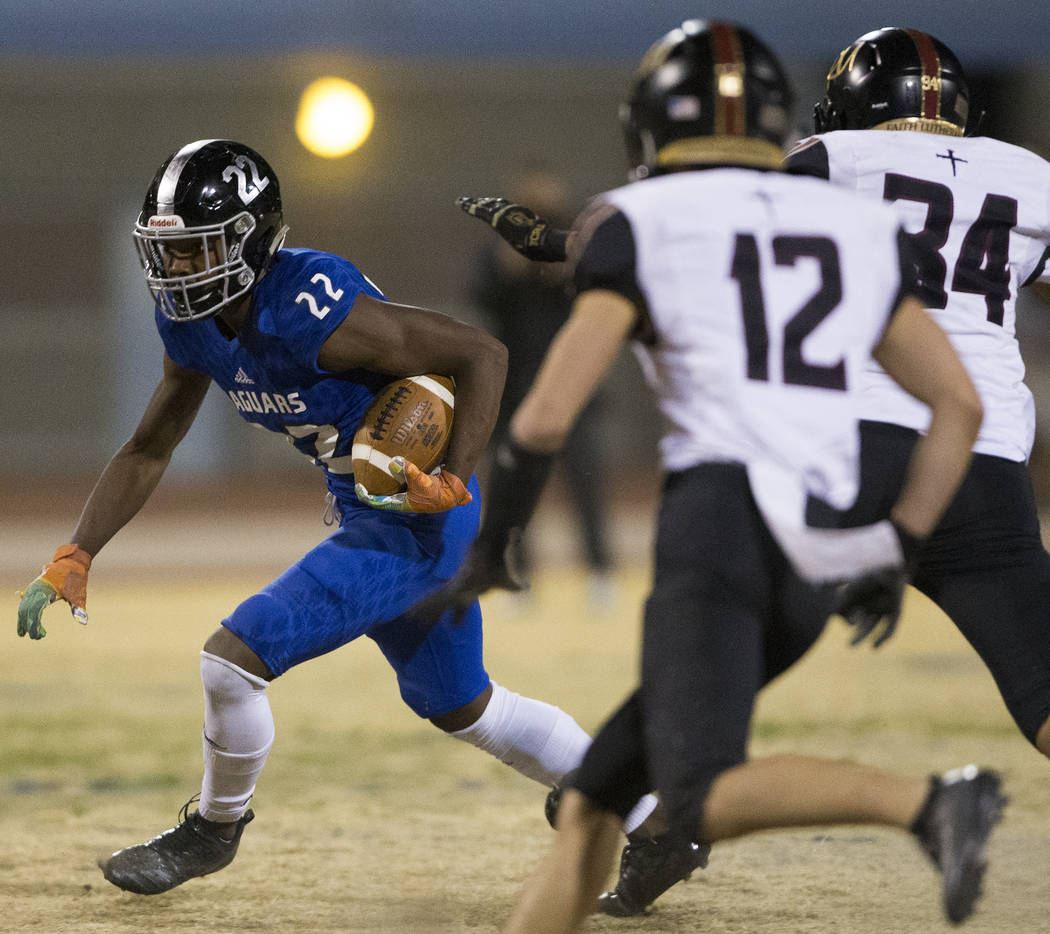 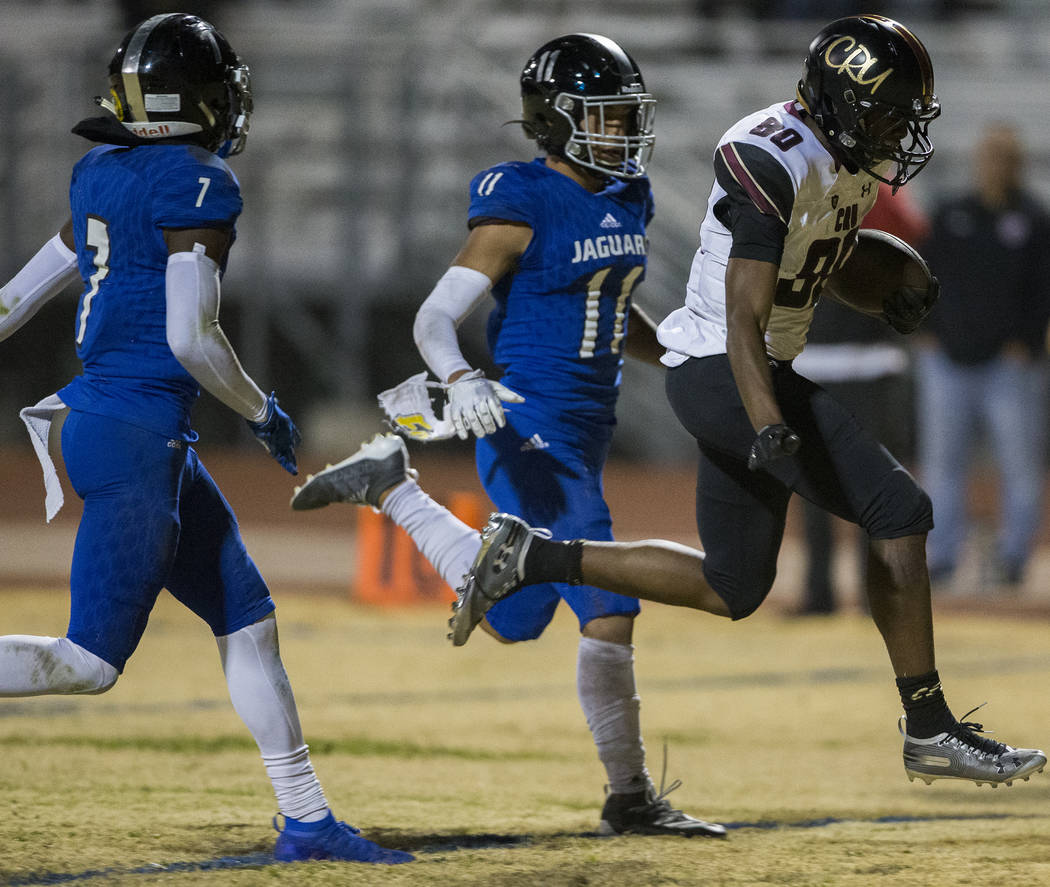 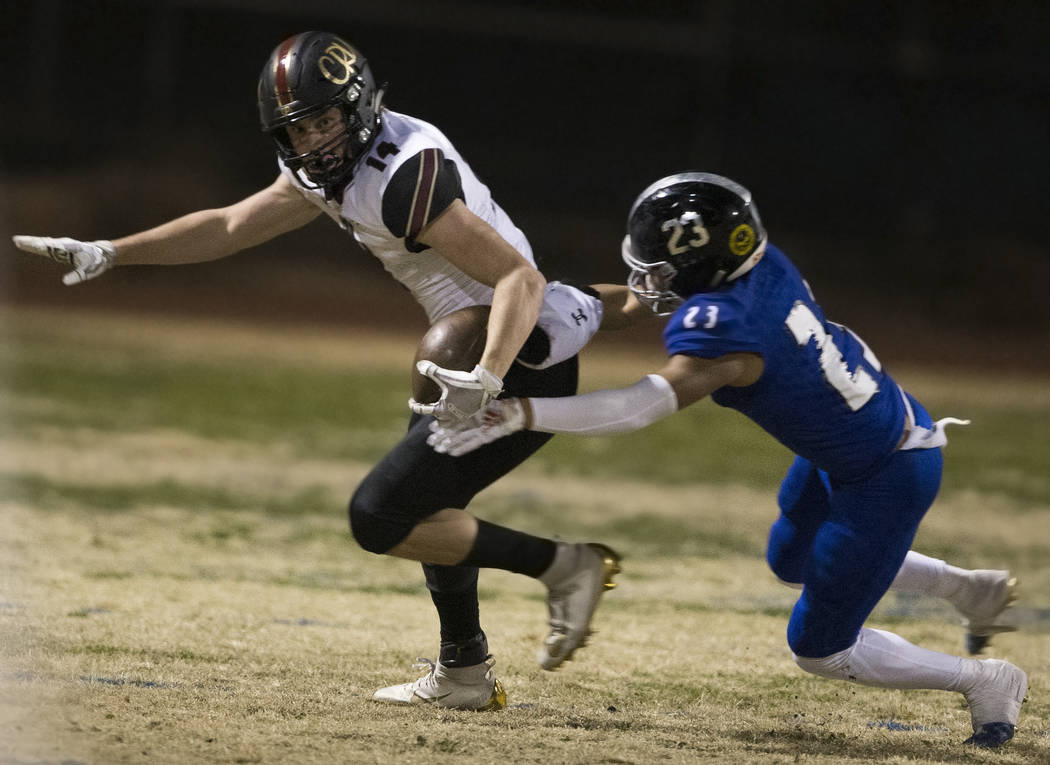 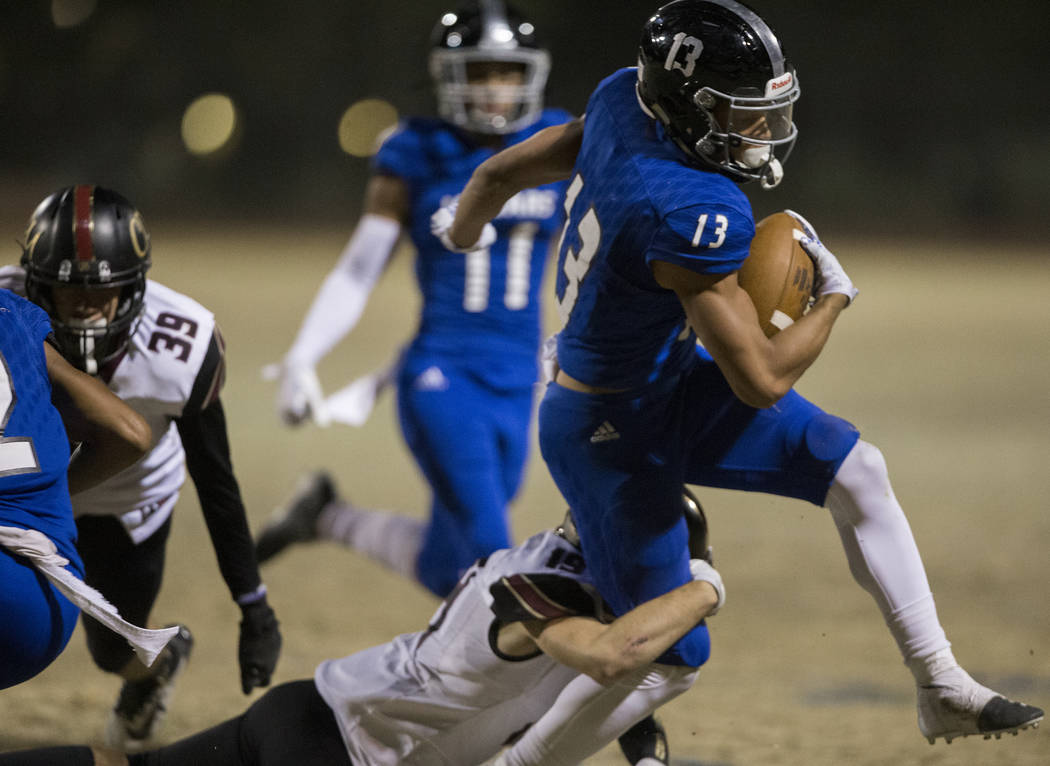 Desert Pines running back Javontae Barnes wants to perform well in the Class 4A state playoffs to honor his grandmother, who died last weekend.

After his performance Friday night against Faith Lutheran, there’s no doubt he’s on his way to doing that.

The sophomore running back ran for 197 yards and two touchdowns on 20 carries as the host Jaguars rolled past the Crusaders 41-17 in the Mountain Region quarterfinals.

“It means so much,” Barnes said. “All she wanted me to do was chase my dreams and make it to the (NFL). I’ve dreamed about that since I was 3 years old. My last text message from her was actually last week, and she said to do it for her, so that’s what I did. I’m doing this whole thing for her.”

On the Jaguars’ fourth-quarter scoring drive, Barnes did it all — 65 yards and a touchdown on four carries. He credited his offensive teammates for opening the holes throughout the game.

“We came out here as brothers, as a team,” Barnes said. “We fought, had a strong battle, but we came out with the ‘dub’ (win).”

The Jaguars responded on their opening possession, a six-play, 62-yard scoring drive capped by a 12-yard run by Barnes.

The Crusaders then fumbled the ensuing kickoff, which lead to a 1-yard scoring run by Darius Stewart to give the Jaguars a 13-3 lead.

Faith Lutheran drove to the Desert Pines 22 on its next possession, but an interception by Jett Solomon led to a 20-yard scoring strike from Rjay Tagataese to Malik Brooks to give the Jaguars a 20-3 lead.

“It was a total team effort,” Desert Pines coach Tico Rodriguez said. “Faith is a great program, led by a great man and great head coach. And we were just excited to come up on top.

“We were just really physical up front with the offense and defensive line. We were able to impose our will on both and just control the game.”

The Crusaders’ offense got back on track in the second quarter, as quarterback Riley Schwartz hit Quenton Rice for a 20-yard touchdown pass to cut the deficit to 20-11.

Schwartz led the Crusaders with 313 yards passing and two touchdowns. Peyton Thornton had 10 catches for 113 yards and a TD.

The Jaguars quickly regained the momentum when Tagataese hit Deandre Moore for a 40-yard TD pass with 29 seconds remaining in the first half.

Stewart scored on a 59-yard TD run in the third quarter to push the Jaguars’ lead to 34-11.

“Those turnovers (in the first quarter) really got us going, but we kind of sputtered in the second quarter,” Rodriguez said. “This team is a resilient team, and we’re always a second-half team, so it was good to see the guys not panic and stay poised under fire.”

Desert Pines will host Canyon Springs next week in the second round. The Jaguars defeated the Pioneers 49-14 in the regular season.