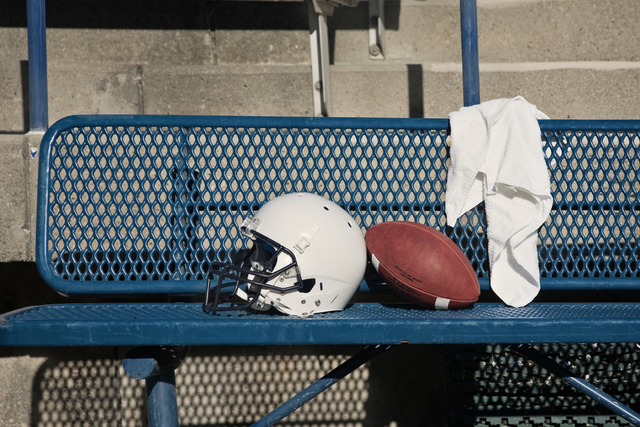 With only one week left in the regular season, the Class 4A Sunset Region football playoff picture isn’t exactly crystal clear.

Or even partly cloudy.

Four teams have locked up spots. Eight more remain alive for the other four spots, and the possibilities seem endless. Thankfully, we have an in with the Nevada Interscholastic Activities Association’s tiebreaker guy, who tried to simplify everything for us.

You’ll need to be sitting down for this, and before your head spins, let’s get the givens out of the way.

Arbor View and Faith Lutheran, in that order, have locked up the top two spots in the Northwest League.

Bishop Gorman and Sierra Vista play Friday with the winner taking the top seed and the loser the No. 2 seed in the Southwest League.

The rest has all the clarity of mud. This is the simplified version, kind of. A full breakdown from the tiebreaker guy is here.

And for those looking for something far more simple, every other region either has started or will start its playoffs this week. Playoff glances are here to help you keep track.

As mentioned, the Gorman-Vista winner is the No. 1 seed, the loser the No. 2.

The Durango-Spring Valley winner is in\. Durango isn’t necessarily out with a loss.

Durango: In with a win OR a Desert Oasis win OR if Spring Valley wins by 12 or more.

Spring Valley: In with a win.

Desert Oasis: In only with a win by at least four points, coupled with a Durango win.

Arbor View is the top seed here, and Faith Lutheran, which has completed its season, is the No. 2 seed.

Shadow Ridge winning by 12 or fewer points makes Legacy the No. 3 seed and Palo the No. 4 seed. But if Shadow Ridge wins by 13 or more points, all three are even in point differential, and we would continue down the NIAA flow chart to points allowed head-to-head (with a maximum of 13 per game):

• Scenario 1: If Shadow Ridge wins by 13 or more points AND allows no more than eight points, Shadow Ridge is the No. 3, Legacy is the No. 4 because of its win over Palo Verde.

Legacy: In under any of the following: a win; a Centennial win; a loss by 12 or fewer; a loss in which it scores fewer than nine points. (Yes, Legacy could take a knee on every play and still get in.)

Shadow Ridge: In with a win, coupled with a Centennial win; OR with a win by 13 or more points.

Palo Verde: In with a win, coupled either with a Legacy win or a Shadow Ridge win by 12 or fewer points; OR in with a win and if Legacy scores at least nine points.

Centennial: In only with a win, coupled with a Legacy win.

Now that you’ve copied everything on to your white board, follow along with us on Friday.