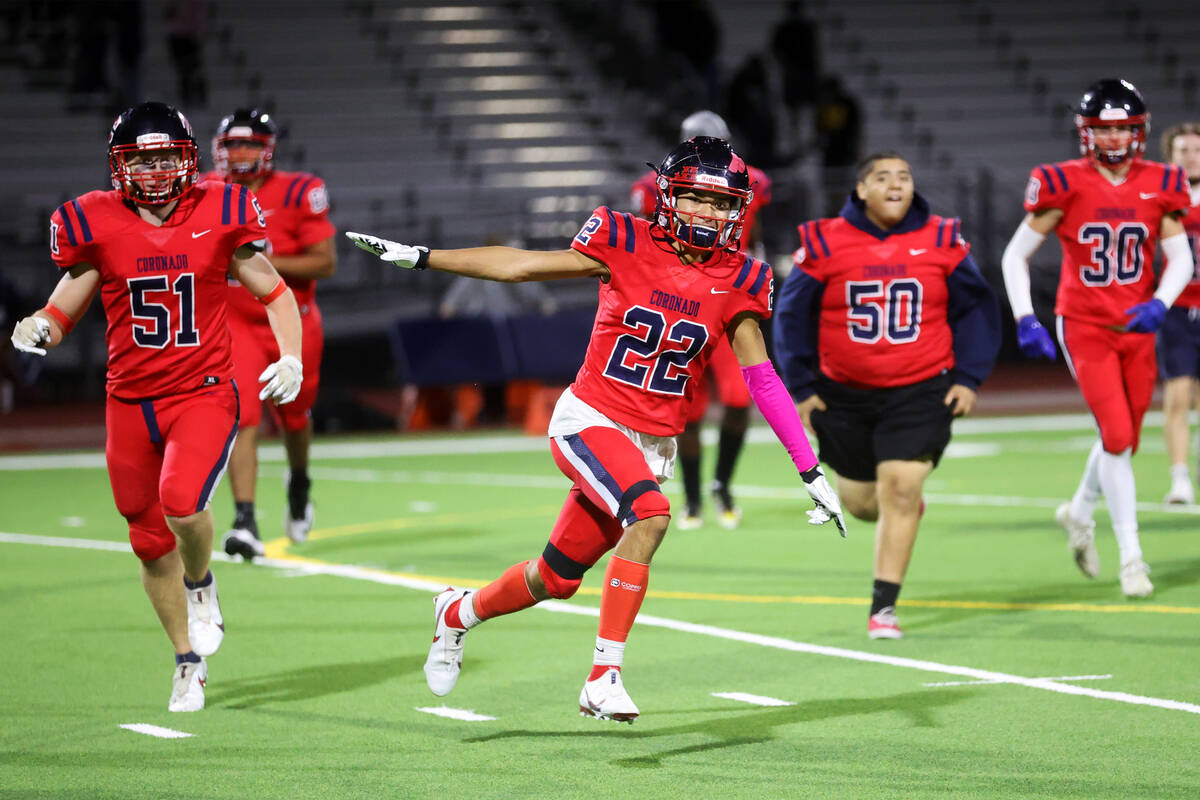 With only five teams and four playoff spots available, one win in Class 5A Mountain League play might be enough to capture a postseason berth.

Desert Pines 38, Las Vegas 0 — At Las Vegas, Jovantae Barnes ran for 190 yards and three touchdowns, and the Class 5A Jaguars blanked the 4A Wildcats.

Clark 42, Del Sol 0 — At Del Sol, D’on Williams ran for two touchdowns and caught a pass for a score to help the Chargers past the Dragons.

Jaylen Johnson ran for a touchdown and caught a scoring pass from Mason King, who threw for two TDs for Clark (6-1, 2-1 4A Mountain League). Julian Fuller added a first-quarter interception return for a touchdown for the Chargers.

Desert Oasis 24, Cimarron-Memorial 12 — At Cimarron-Memorial, Tyler Stott threw for three touchdowns, including a 93-yarder to Elijah Darwin, to help the Diamondbacks stay unbeaten in league play.

Durango 12, Basic 6 (2 OT) — At Durango, Cole Marquez ran in from 2 yards in double overtime, and the Trailblazers’ defense stopped the Wolves to secure the win.

Jaxon Young caught a 15-yard touchdown pass in the second quarter for Durango (4-3, 1-1 4A Mountain League) before Basic (2-4, 0-2) tied the score with about two minutes left in regulation.

Jaden Thrower caught two touchdown passes and returned a punt for a score for Silverado (7-0, 3-0 4A Desert League), which did all its scoring in the first half. Michael Green added another punt return for a touchdown, and John Agounke took an interception to the end zone.

Spring Valley 16, Bonanza 6 — At Spring Valley, Jaden Linzie ran for a touchdown, and Colton Jones had a return for a TD to lift the Grizzlies.

Both touchdowns came in the third quarter and combined with a Maddux Conklin 33-yard field goal and strong defensive effort to give Spring Valley (3-3, 2-1 4A Sky League) the win.

SLAM Nevada 31, Boulder City 19 — At Eldorado, Joey Kuykendall ran for three touchdowns, and the Bulls held on after racing to a 21-0 lead.

Rancho 34, Eldorado 7 — At Rancho, the Rams ended a three-game losing streak and picked up their first league win.

The Pirates (7-0, 3-0 3A Mountain League) limited an opponent to seven points or fewer for the fifth time. They will host 4A Clark next week.

Virgin Valley 38, Valley 6 — At Valley, Gavin Brown was 13-for-19 for 225 yards and four touchdowns, and the Bulldogs stayed unbeaten in league play.

Jimmy Kelly caught six passes for 120 yards and three touchdowns, and Kennen Dugan ran for 106 yards and a touchdown for Virgin Valley (7-1, 3-0).

The Meadows 13, Democracy Prep 12 — At The Meadows, Dawson Levine ran for a 5-yard touchdown with 1:30 remaining to keep the Mustangs unbeaten in league play.

Sean Gosse had 187 yards passing, including a 21-yard TD pass to Finn Riley in the second quarter, but struggled to a 9-for-27 night for The Meadows (7-1, 5-0 2A Southern League). John McGill had four catches for 95 yards.

Democracy Prep (2-4, 2-3) scored on a 5-yard Marcus Harston run in the first quarter and a Greg Jones 30-yard run in the third.

Pahranagat Valley 42, Mineral County 0 — At Mineral County, Gage Davis was 6-for-8 for 162 yards and two touchdowns, ran for 123 yards and a touchdown and had an interception on defense in the Panthers’ win.

Jaren Leavitt ran for three touchdowns for Pahranagat Valley (4-1, 1-0 Central League), which did all of its scoring in the first half.