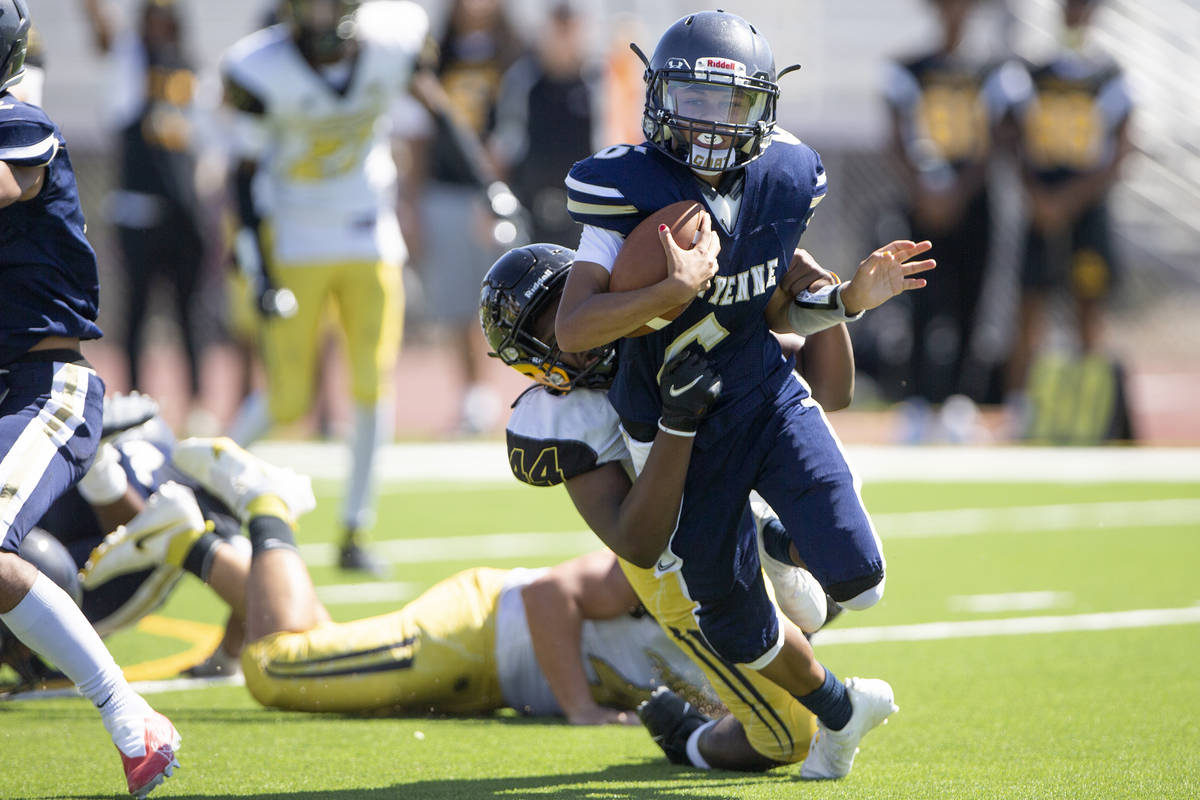 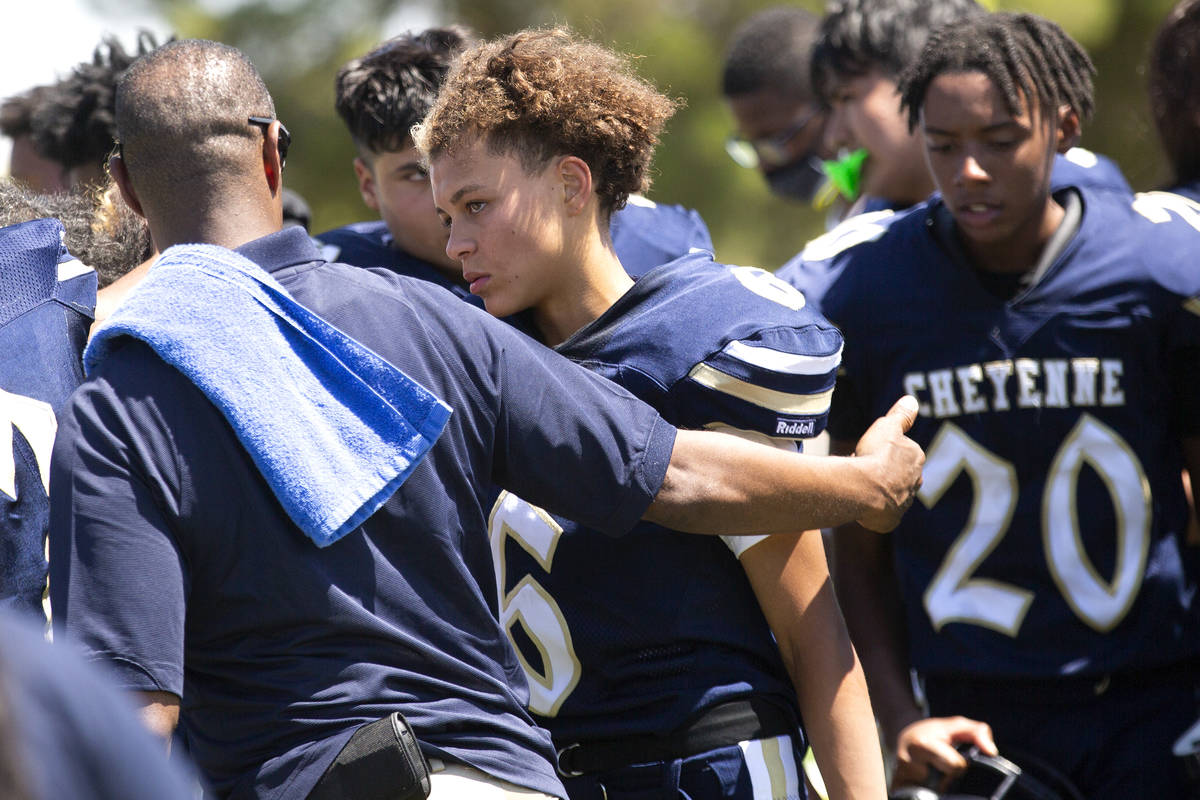 Cheyenne quarterback Kaleigha Plett, center, heads toward the sidelines for half time during a football game against Clark High School at Cheyenne High School on Saturday, Aug. 28, 2021, in North Las Vegas. Plett is believed to be the first female quarterback to play high school football in Nevada. (Ellen Schmidt/Las Vegas Review-Journal) @ellenschmidttt 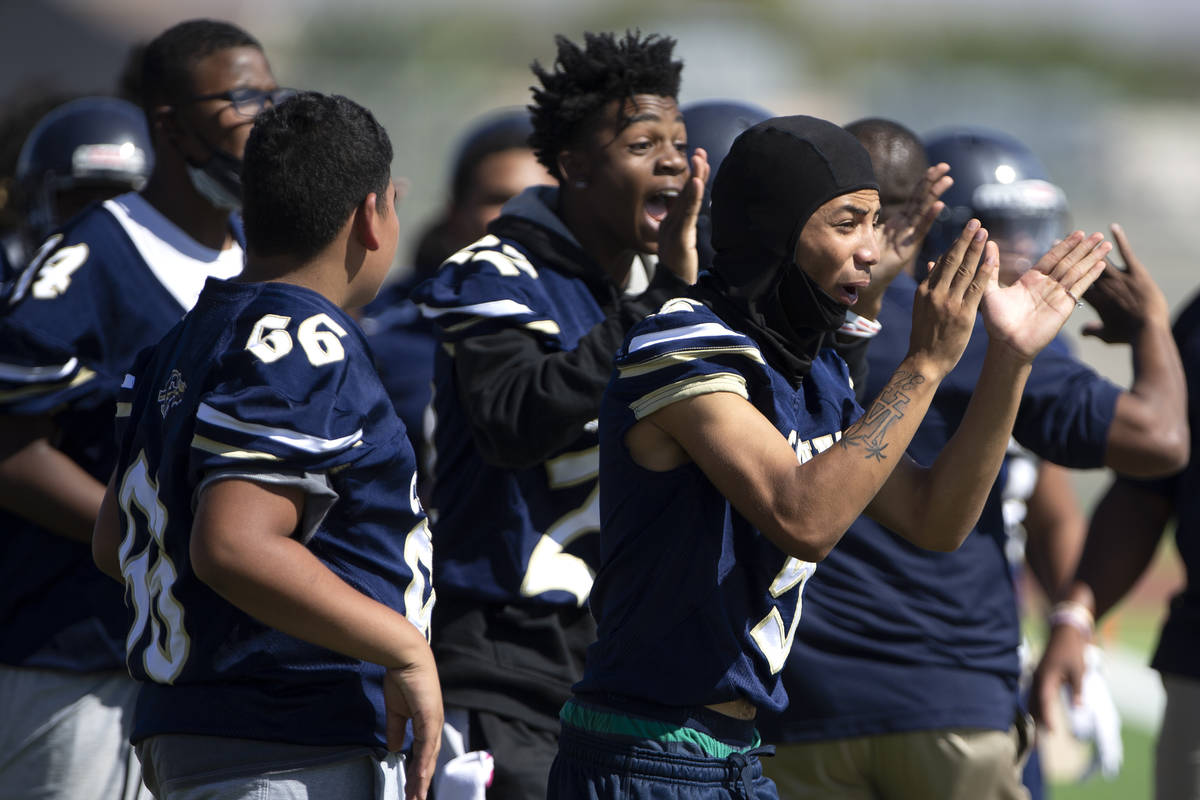 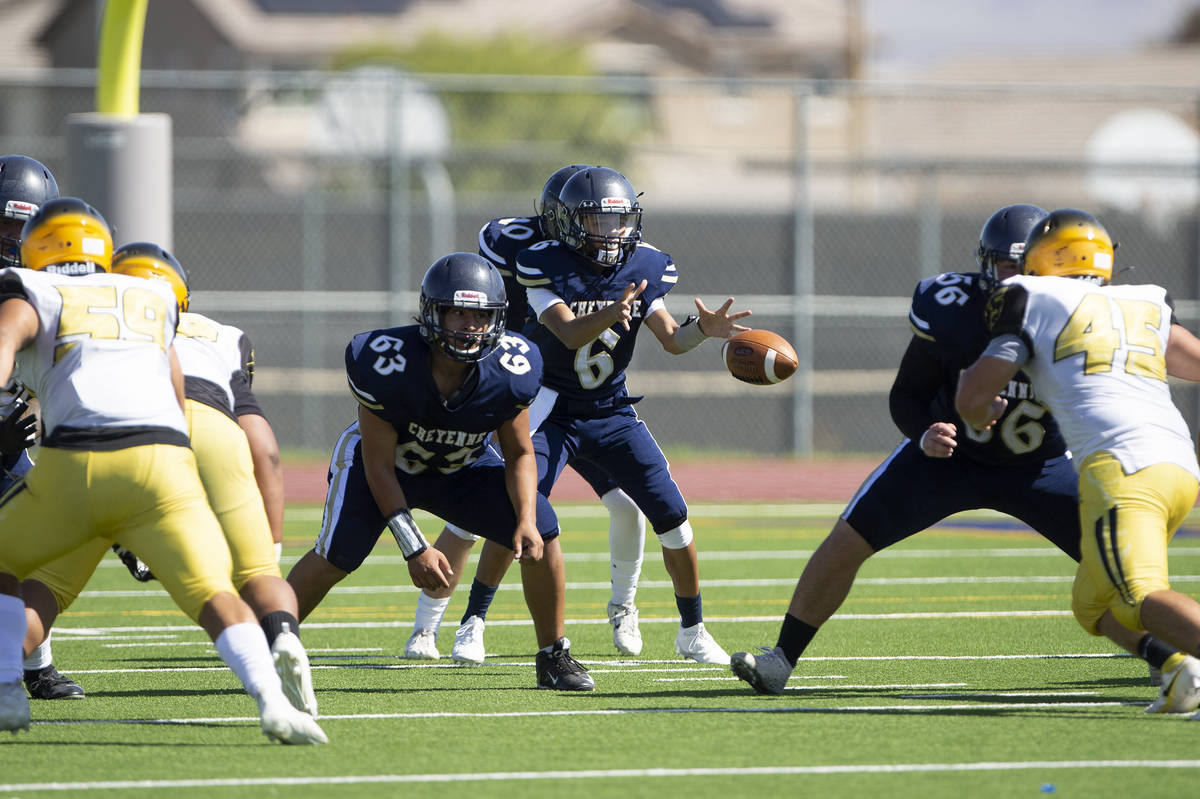 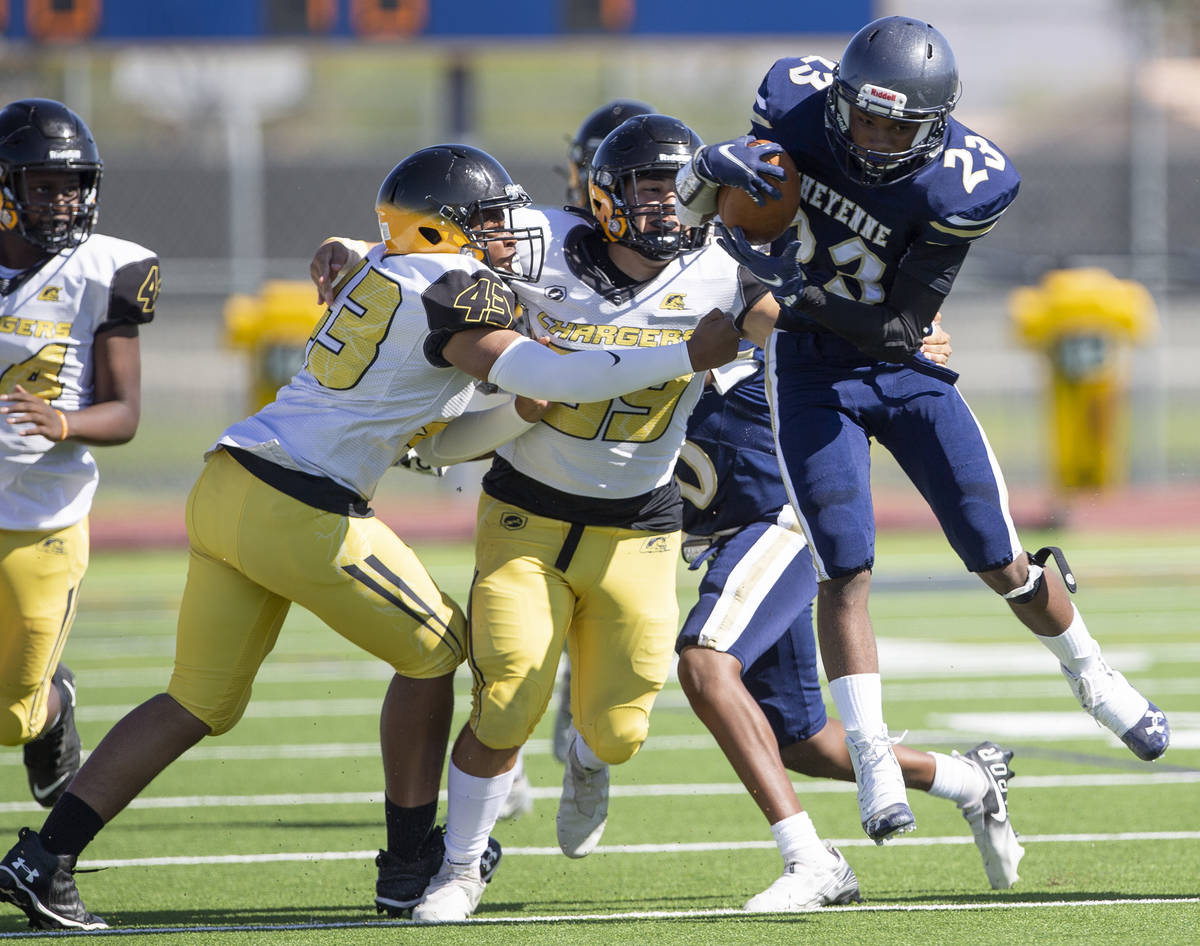 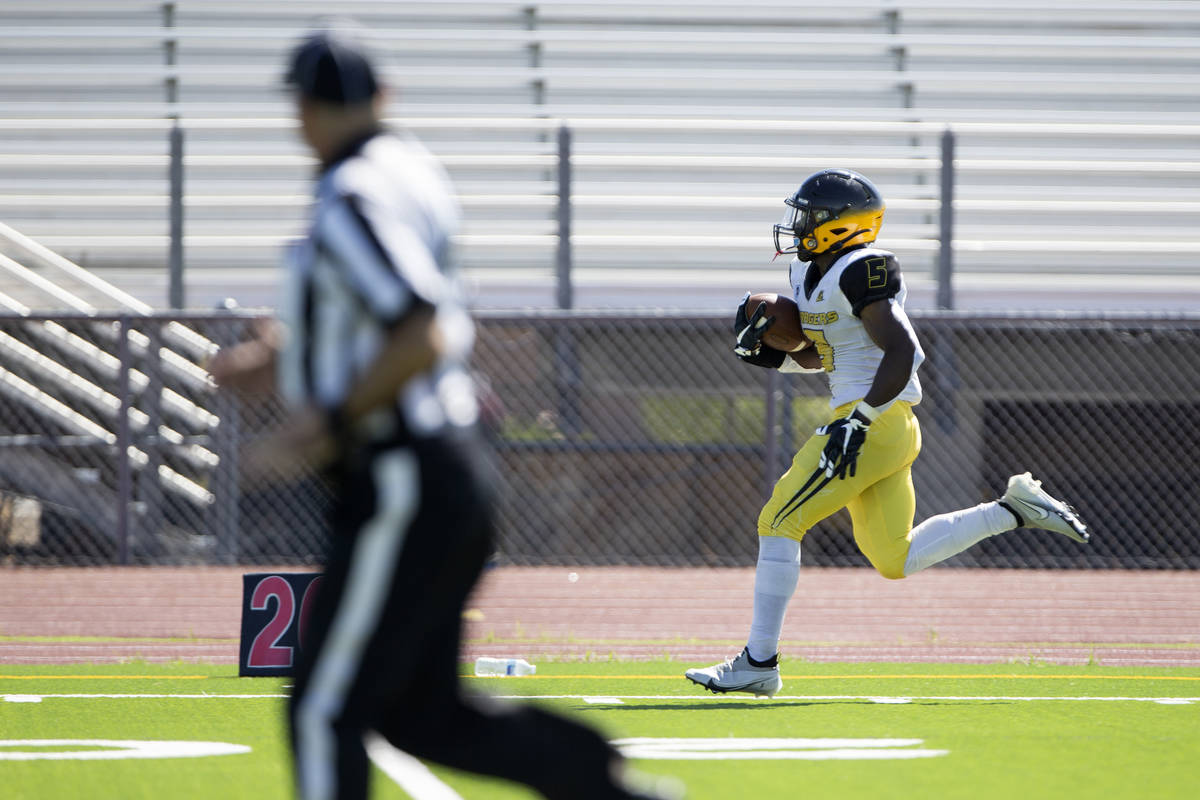 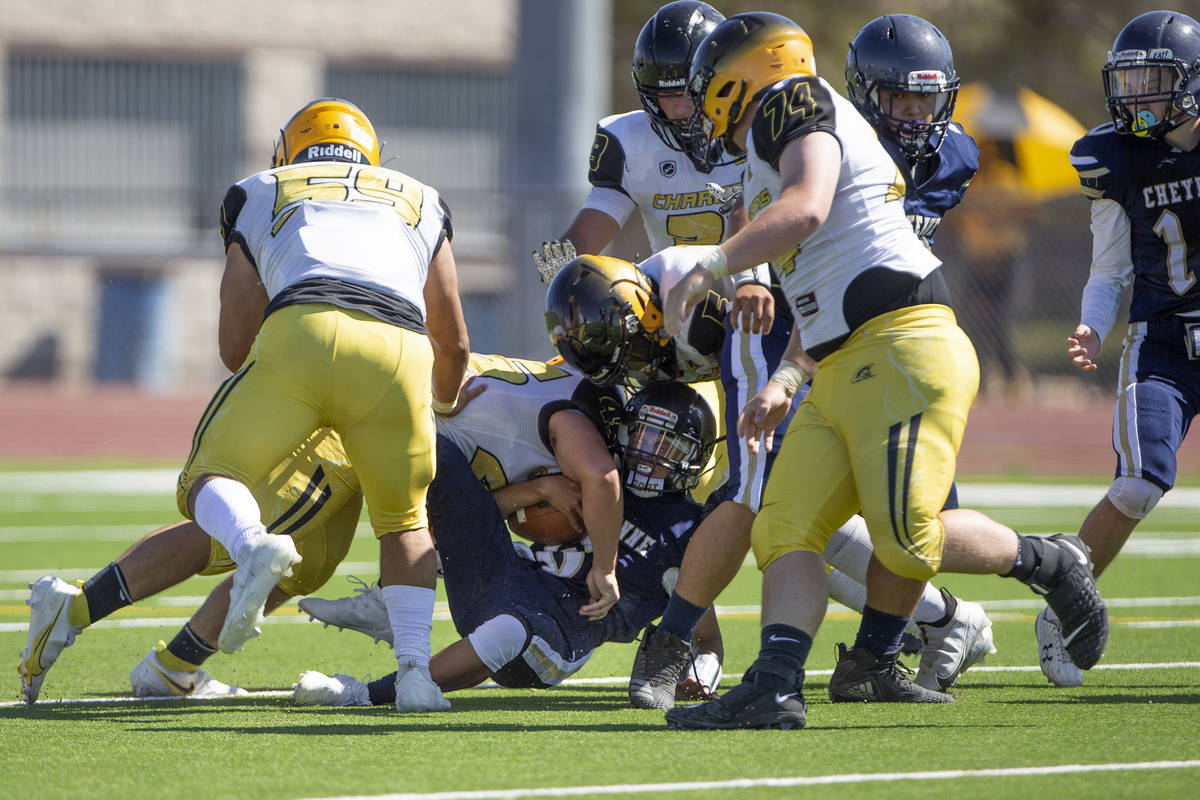 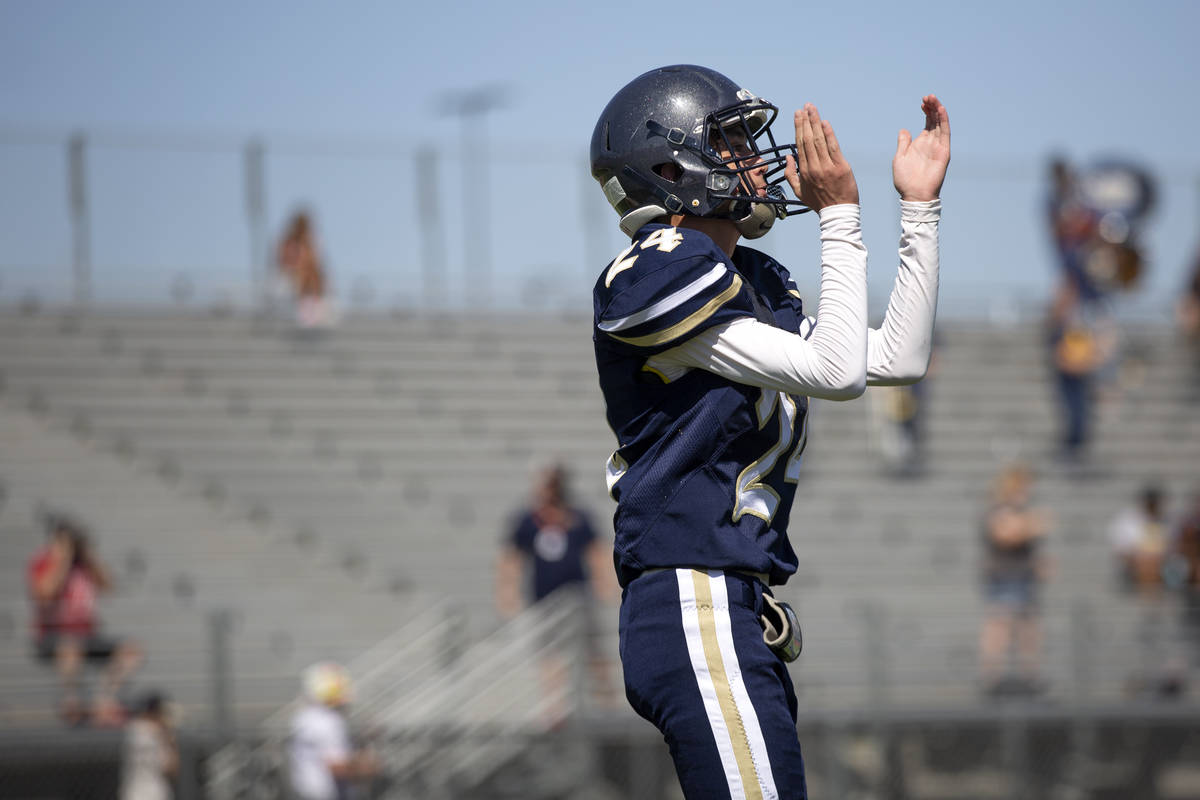 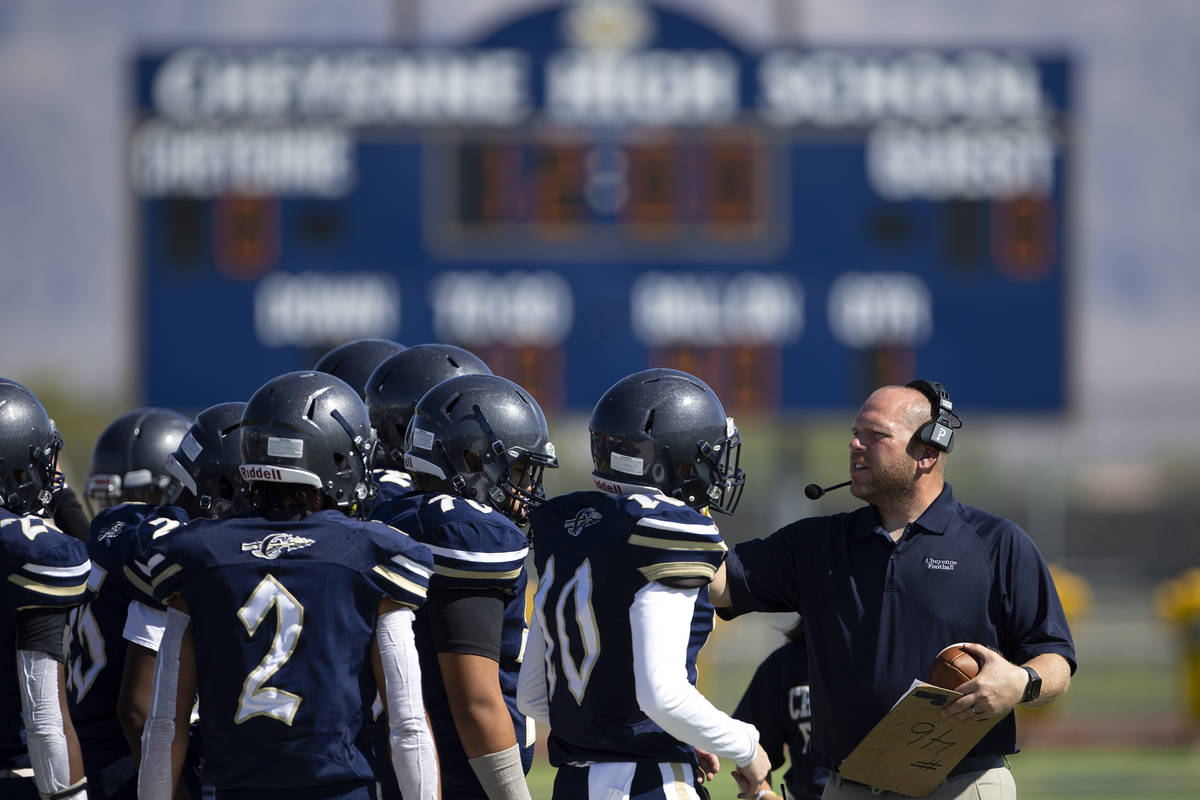 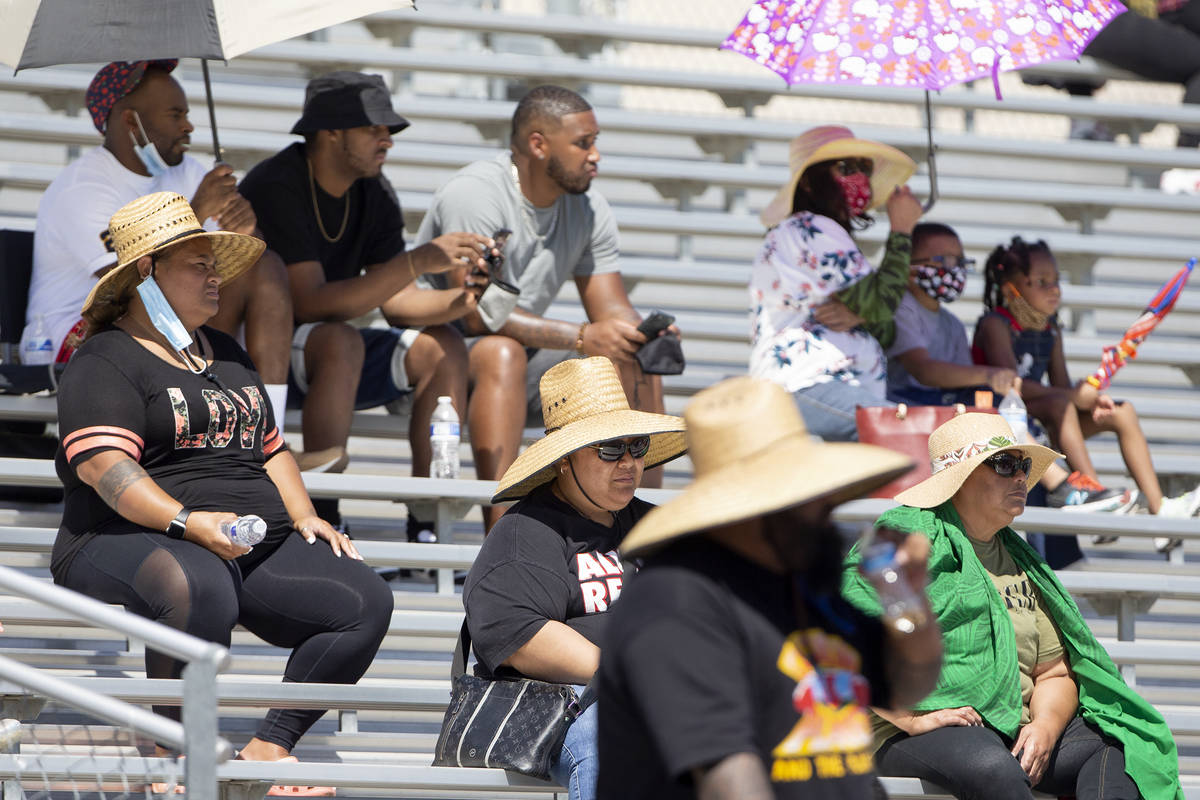 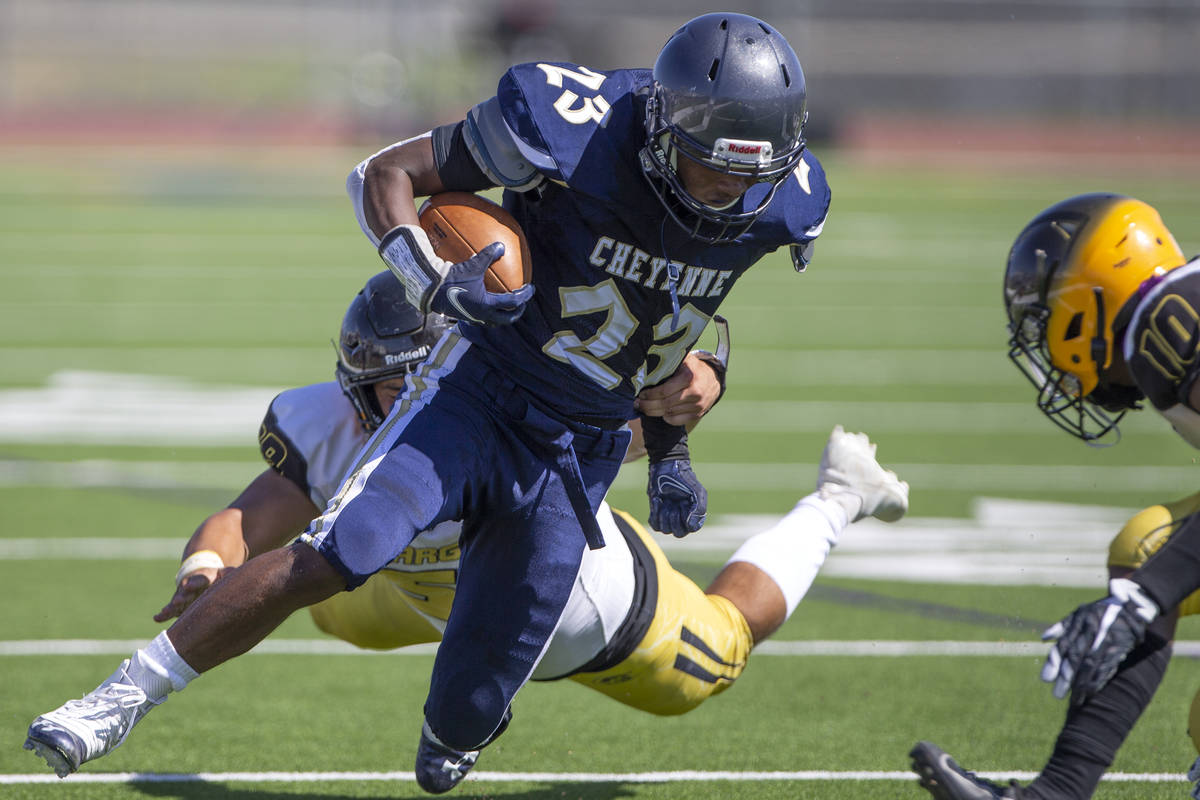 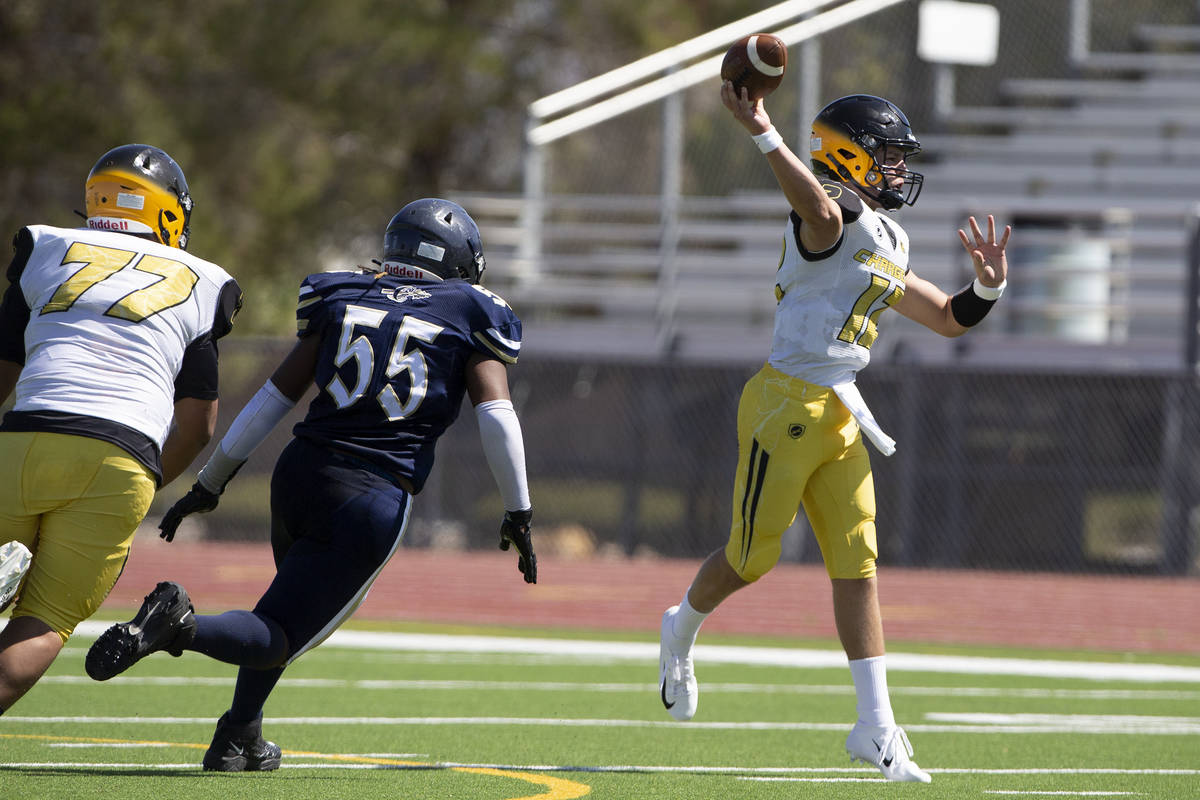 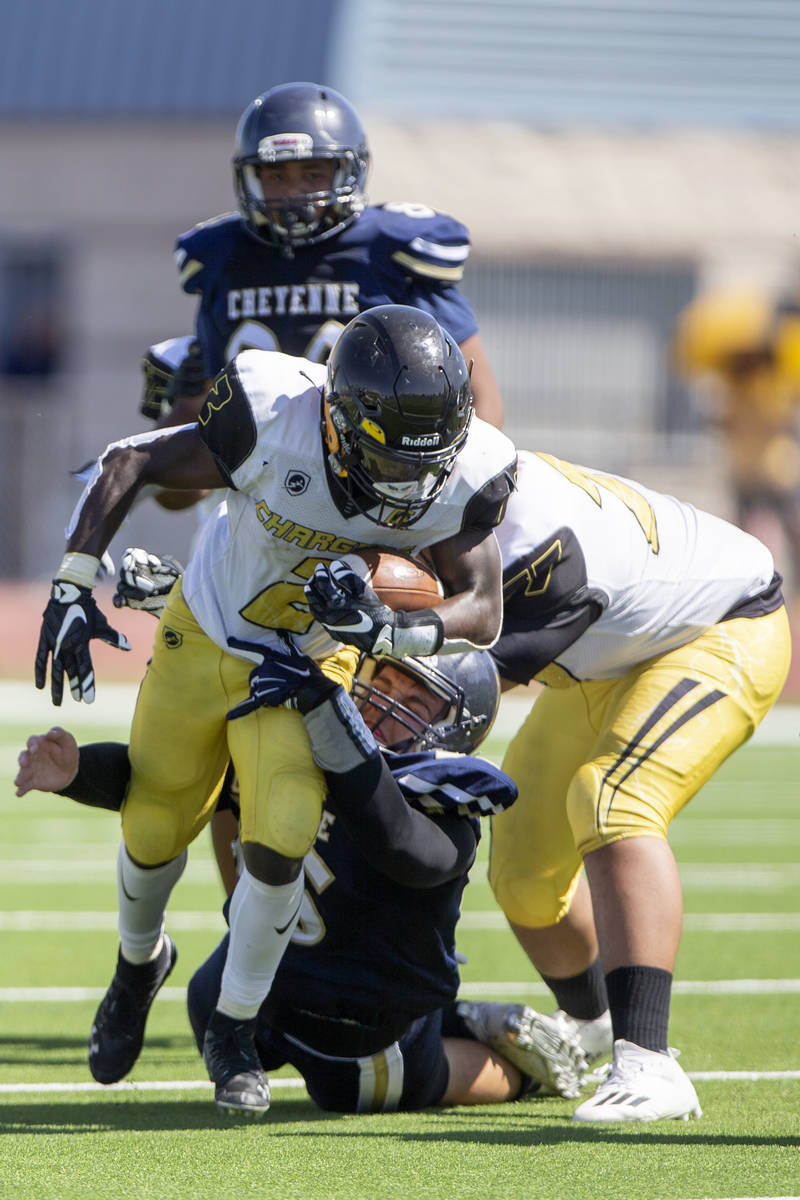 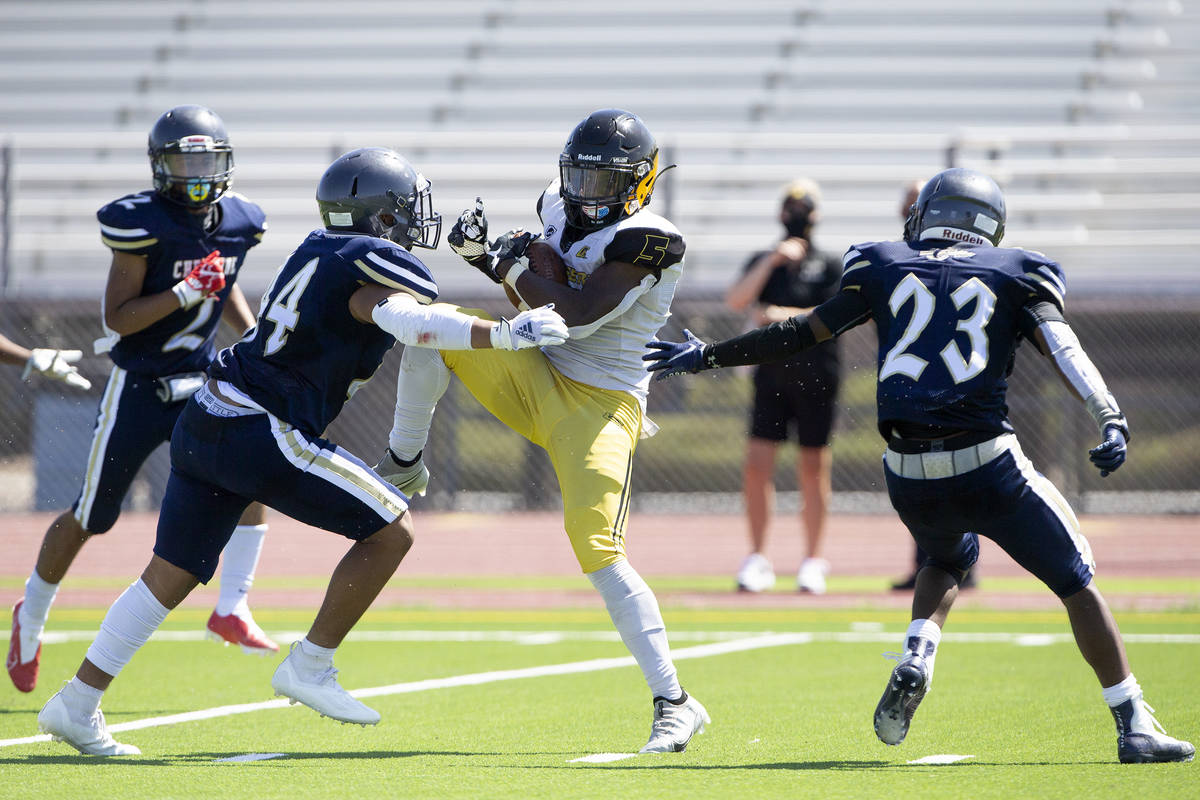 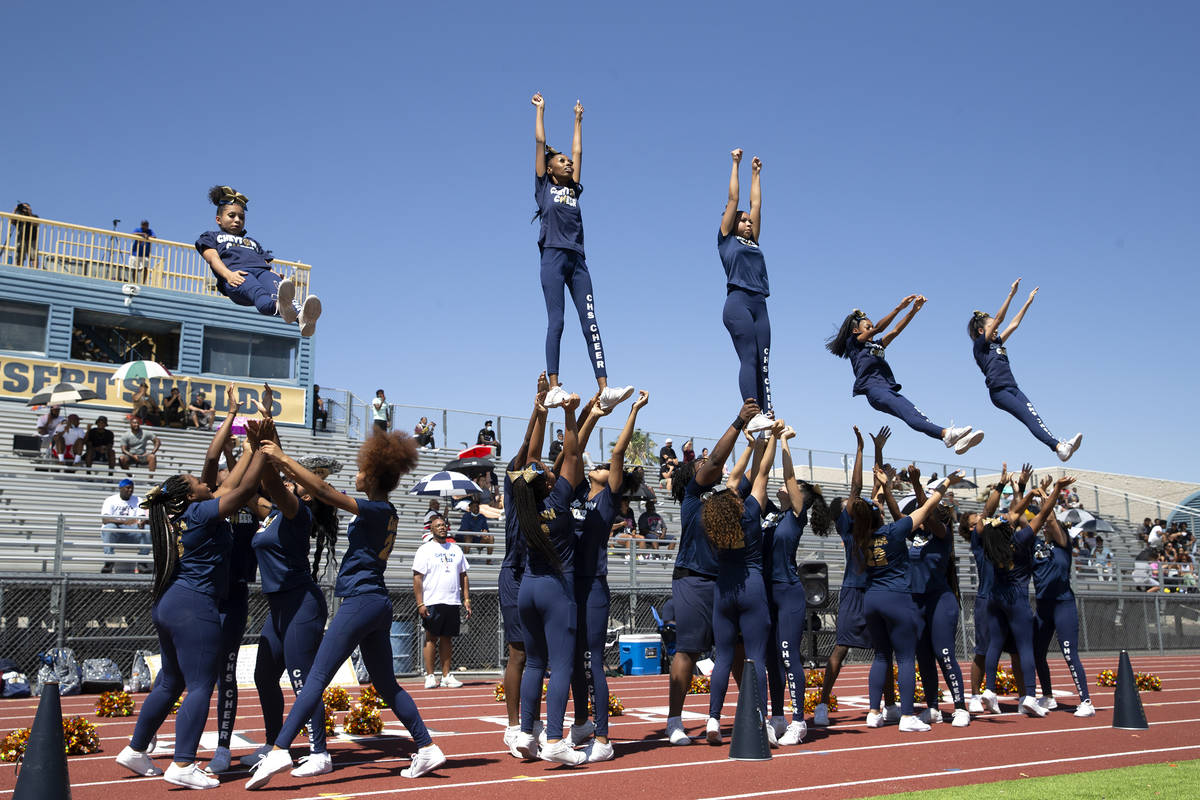 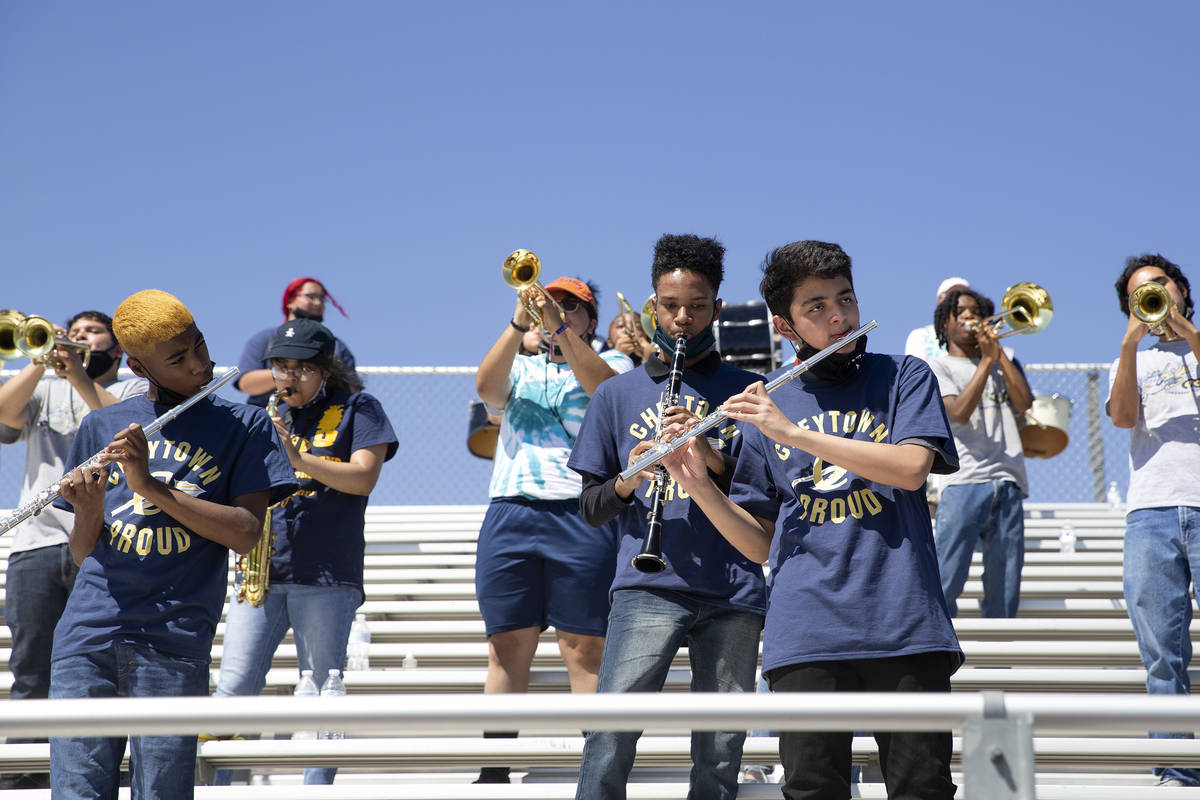 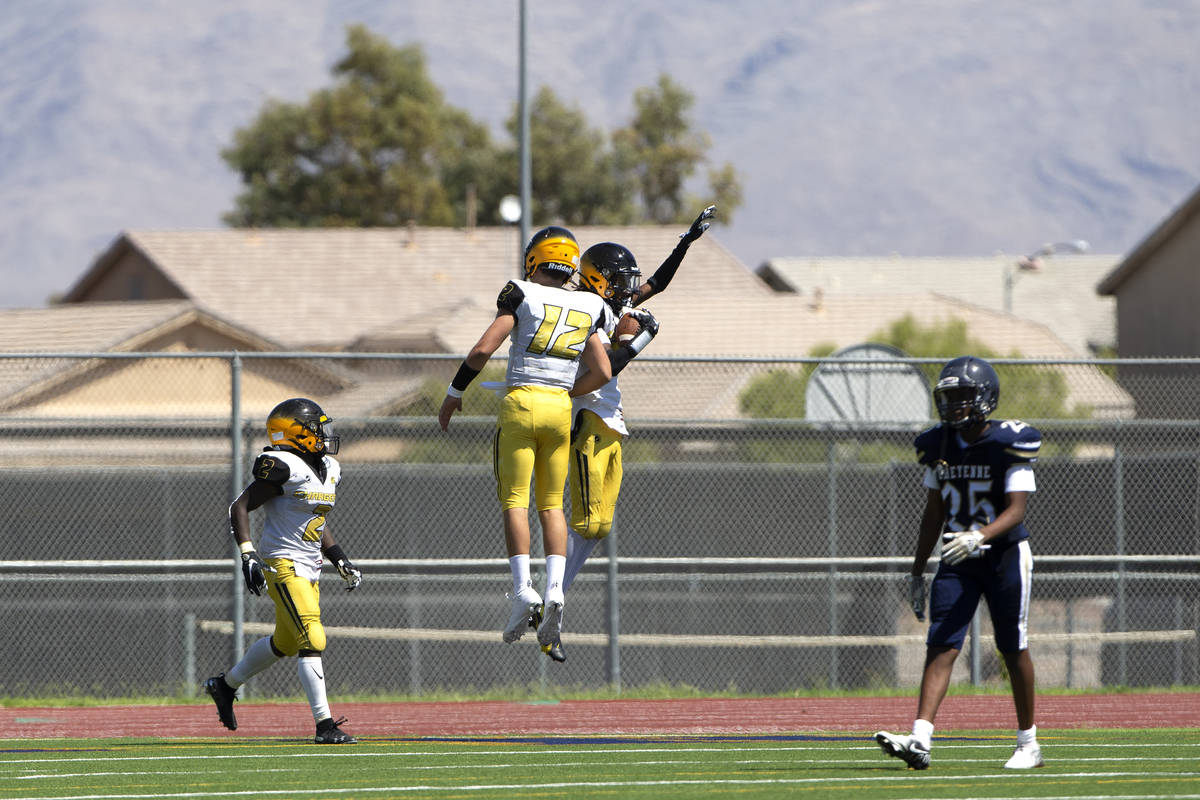 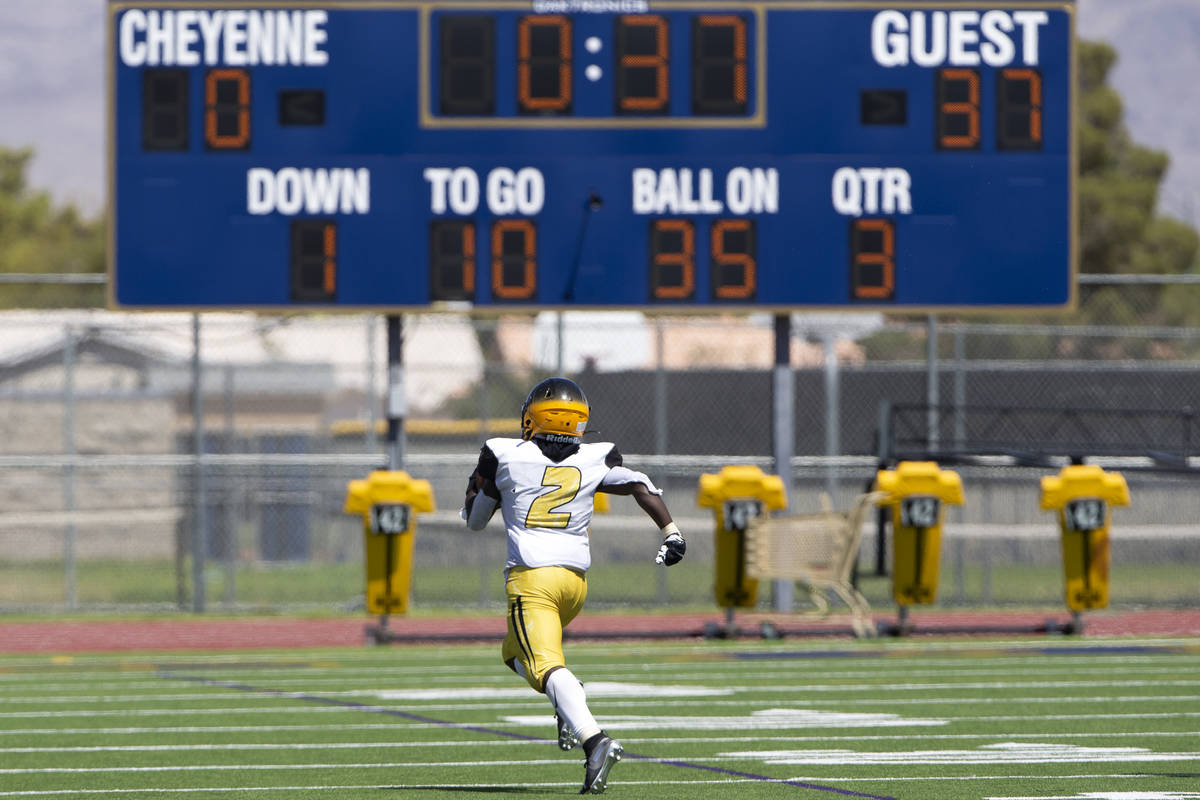 Clark running back Lebon Makwashi (2) runs toward the end zone for a touch down during a high school football game against Cheyenne at Cheyenne High School on Saturday, Aug. 28, 2021, in North Las Vegas. (Ellen Schmidt/Las Vegas Review-Journal) @ellenschmidttt 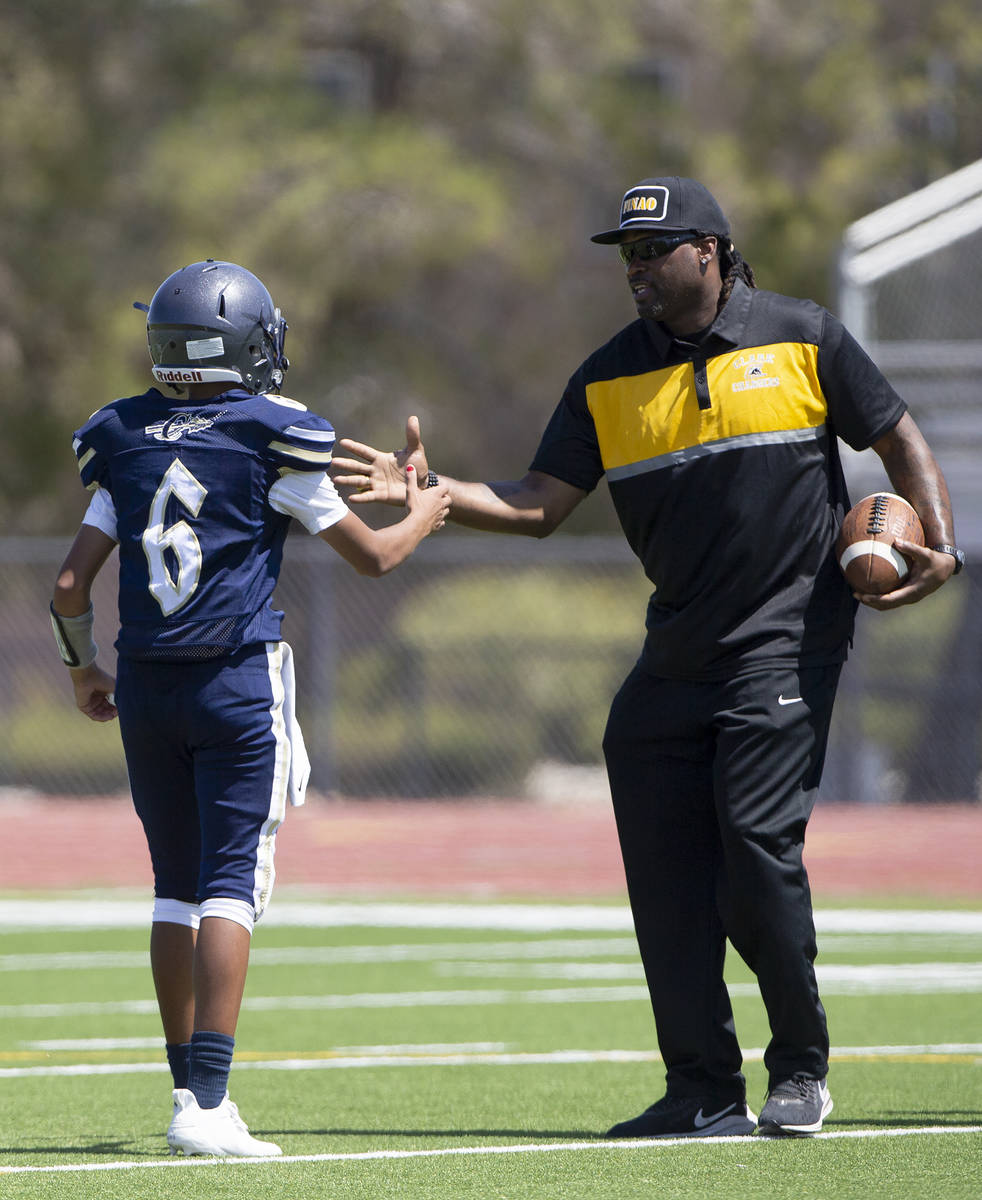 Later, on a third and 8, Plett ran a keeper to the right side and was smothered, leaving her on the Cheyenne field for a couple of minutes before she got back on her feet.

Plett wanted to be treated like just another football player, and Clark obliged by doing just that, taking advantage of shaky Cheyenne blocking to give her little time to operate. Clark was relentless in its 51-0 victory, forcing a running clock for most of the second half.

That result probably was why neither Plett nor her coach, Jared Bennett, was all that interested in making a big deal of the history made. She is believed to be the first female to start at quarterback in Nevada high school history.

“It wasn’t really on my mind,” Plett said. “I was just trying to get the win. It didn’t turn out that way, but we’re going to get it next time.”

Plett did more than just play quarterback. With her teammates cramping as temperatures flirted with 100 degrees, Plett also played cornerback for much of the second half.

“She played her tail off everywhere she got on the field,” Bennett said. “She’s been one of those that’s been a bright spot. ”

But quarterback is where Plett has received the most attention. She completed her only official pass attempt for a yard. She spent most of the time handing off in a run-oriented offense.

Neither she nor her teammates found much running room. Clark’s larger and more physical defensive front dominated the line. Cheyenne never advanced beyond Clark’s 31.

For the game, Plett lost 24 yards on a combination of five rushes and sacks. Plett also was called for intentional grounding in the end zone, giving Clark a safety.

Given the little help she had, this game wasn’t the most ideal way to gauge how effective Plett — a former flag football player — can be.

Either way, Bennett promises to grade her like he would any other player. She is the one who wanted this opportunity, raising her hand to play quarterback on a roster depleted because of the ongoing COVID-19 crisis.

In a more typical time, the junior would be learning at junior varsity.

“I told her when she came out for football, I’m going to treat her like anybody else. And she doesn’t expect anything different,” Bennett said. “She came out and did her job and knew her assignments. She played tough. She’s a football player.”

No one can question her toughness. Plett is 5 feet 5 inches and 120 pounds, and she missed only one play at quarterback despite taking a beating.

“I just kept getting up,” Plett said. “I didn’t really think anything of it. That’s what I’ve been doing my whole life, so it wasn’t anything. really.”