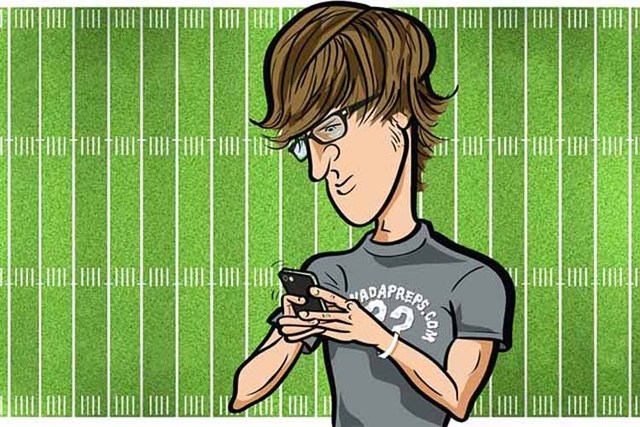 First off, I’d like to clear up a rumor that has been floating around. No, I am not going to be the next coach at Bishop Gorman should Tony Sanchez take over at UNLV.

I know some readers think I just looooove the Gaels, and at least one wrote that I have a “Gorman bias,” which I don’t. But the truth is, I have big plans for the winter. And they don’t include coaching.

Eric, Skeet and I are going on a road trip to check out colleges this month. We can’t officially apply since we’re not seniors yet, but we agreed we’re all attending a school that’s close to the beach no matter what. Sorry, University of Wisconsin. Love your hockey team, though.

After that, we’re headed to Mystery Spot in Santa Cruz, Calif., because Eric swears water flows uphill there, and I don’t believe him. Then, I need to study for the SAT. So, as you can see, my schedule is already full for the next couple of months.

But before I do any of that stuff, here’s a few parting thoughts since the prep football season comes to an end Saturday in Reno when Gorman takes on Reed:

■ No matter what side of the public vs. private school issue you stand on, if Bishop Gorman wins the mythical national championship as expected, it would speak to the high-level talent that’s in Las Vegas.

■ Shoutout to Las Vegas coach James Thurman, who provided my favorite quote of the year: “When we’re not puking the ball up, we can be all right, hopefully.”

■ Get-well wishes to the Moapa Valley cheerleader who took a shot to the head at halftime of the Division I-A state quarterfinal when the Pirates ran onto the field and burst through the banner she was standing behind.

See you all during basketball season!

Can we officially start calling this a rivalry? There will be plenty of animosity present at Damonte Ranch High — at least on the Reed side — which is a prerequisite in a rivalry. And this will be the fourth straight year (and fifth time in six seasons) the teams have met in the postseason.

Then again, it’s been a pretty one-sided affair. Gorman has won the four previous matchups by an average score of 58-22 and hasn’t scored fewer than 48 points against the Raiders in that span.

Remember the Gaels’ 72-28 victory in the 2011 state final that got folks up north so bent out of shape the NIAA briefly considered banning Gorman from the postseason? That was fun.

How Reed can win: It can’t. But, good job, good effort getting this far, Raiders.

Why Gorman will win: One of the most impressive traits of Sanchez-coached teams is they rarely have a letdown. Many teams might fold under the pressure of playing for a sixth straight state championship — not to mention a national title — but that won’t happen to the Gaels. Of course, having superior talent helps, too.

Gorman didn’t look like the best team in the nation when it needed overtime to edge Bingham (Utah) and rallied to beat Corona (Calif.) Centennial the next week.

Like the five previous teams under Sanchez, though, Gorman got better as the season went along.

If this is Sanchez’s final game at the school and the Gaels win, he’ll leave with a 68-0 record against schools from Nevada. Watch out, UNR! … Bishop Gorman by 35.