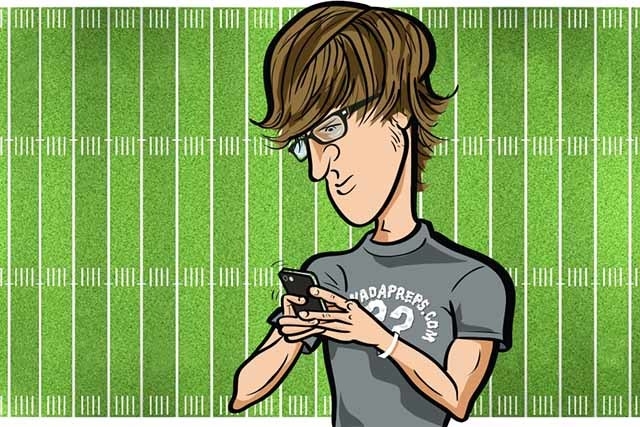 It’s the officially unofficial halfway point of the prep football season, which means it’s time for me to hand out a few midseason awards.

Eric and Skeet said I should call them the Fieldies. They’re sort of like the Razzies, only with far less Kristen Stewart. The envelopes please …

■ Most Valuable Player — Jocquez Kalili, Desert Oasis. The transplant from Texas has rushed for 893 yards and 14 touchdowns, and several Division I schools have started taking notice, including UNLV. More importantly, he has the Diamondbacks at 3-1 with a big game coming up against Cimarron-Memorial (4-0), but I’ll have more about that later.

■ Unsung hero — Bradley Alexander, Canyon Springs. The junior quarterback is responsible for the only zero in the interception column of the Southern Nevada passing leaders. It’s not like all he’s doing is handing off, either. Alexander is sixth in the area with 970 yards passing and has tossed seven TDs.

■ Best cheer by a student section — Legacy, which belts out, “It’s a bird! It’s a plane! It’s Nieamiah Lane!” after every big play by the senior wide receiver/linebacker.

■ The Van Hagar Award — Nick Gardner, Foothill. Replacements don’t always work out. Remember when they had a new Aunt Viv near the end of “The Fresh Prince of Bel-Air”? Total Dumpster fire. But Gardner threw 13 TDs and kept the Falcons afloat while Drew Doxtator was out injured.

My picks have been going in the right direction recently. I even studied for this week’s games, which should tell you how determined I am to keep this run going.

■ Las Vegas at Green Valley — There’s been a lot of talk about the point total in a hypothetical Baylor-Oregon matchup. Weather permitting, the Wildcats and Gators have the potential to make this the local prep version. Las Vegas is averaging 45 points, while the up-tempo Gators have scored 89 points in their past two games.

There are several other subplots: Green Valley quarterback Christian Lopez’s link to the Wildcats through an older brother, a former QB at Las Vegas. Most of all, though, it’s the first of three “elimination” games in the race for the Northeast League title. … Green Valley by 3.

■ Bishop Gorman at Legacy — The Longhorns had a week to come down after their upset win over then-No. 2 Arbor View and now face the ultimate midterm exam against the top-ranked Gaels.

QB Randall Cunningham Jr. remains Gorman’s leading rusher — that can’t be a good sign, right? — and Legacy will be brimming with confidence after holding Arbor View to 252 yards and no points. Apples and oranges, I know. I’m just sayin’. … Bishop Gorman by 17.

■ Desert Oasis at Cimarron-Memorial — I think I’ve been underestimating the Diamondbacks so far. This game will let me know for sure considering the Spartans are one of two unbeatens in Division I and allow a mere 6.5 points per game.

Kalili and Cimarron counterpart Michael Barnson figure to rack up plenty of yards on the ground, but this is the first real test for the Spartans and I smell an upset. … Desert Oasis by 3.

■ Desert Pines at Virgin Valley — The Jaguars and Bulldogs have a number of similarities. Each team is 6-0 and must win to keep pace in the Division I-A Sunrise League. Each team can make big plays in the passing game.

The difference is Desert Pines RB Eric Wilkes. One rival coach called the 5-foot-9-inch, 185-pound wrecking ball a “beast,” although I can’t put his exact quote in a family newspaper. Earmuffs! … Desert Pines by 4.

■ Eldorado at Coronado — The Sundevils had a tough time slowing down Basic last week and now face the Cougars and their turbo-charged, NASCAR offense. You probably think I made up that name, but when coach Brad Talich wants his team going at full throttle, someone on the sideline holds up a sign of a checkered flag. Vroom!

Coronado was stuck in neutral for most of the second half last week against Liberty. After a quick pit stop for a tuneup, the Cougars should be performing burnouts again. … Coronado by 10.

■ Durango at Sierra Vista — A game involving two teams with a similar position in the standings is called a “six-pointer” in soccer’s English Premier League, since winning is like a six-point swing. What we have here is a classic “six-pointer,” prep football style.

Four teams are going to battle for the final two playoff berths in the top-heavy Northwest League. That means if the Trailblazers and Mountain Lions harbor any hopes of reaching the postseason, this is a must-win game. … Sierra Vista by 6.

■ Cheyenne at Mojave — I foolishly wrote off the Desert Shields a little too early, and here they are, tied atop the Division I-A Sunset League standings. A victory would set up a big showdown against Faith Lutheran next week, and I just might have to eat a bit of crow if that happens.

The Rattlers have underwhelmed following a solid start to the season and need a win to keep their flickering league-title hopes alive. Setting that aside, even second place is important since it means opening the playoffs at home against a team from the stronger Sunrise League. … Mojave by 1.

■ Faith Lutheran at Pahrump Valley — The Crusaders are facing the classic “trap-game” scenario against an underrated Trojans team. Vernon Fox saw a trap game or two during his NFL career, so the first-year coach probably warned his team all week.

Shane Victorino is a bit tied up at the moment, so he won’t be there to see stepson Keenan Smith. No offense to the folks in Nye County, but this is one trip the Boston Red Sox outfielder probably doesn’t mind missing. … Faith Lutheran by 7.