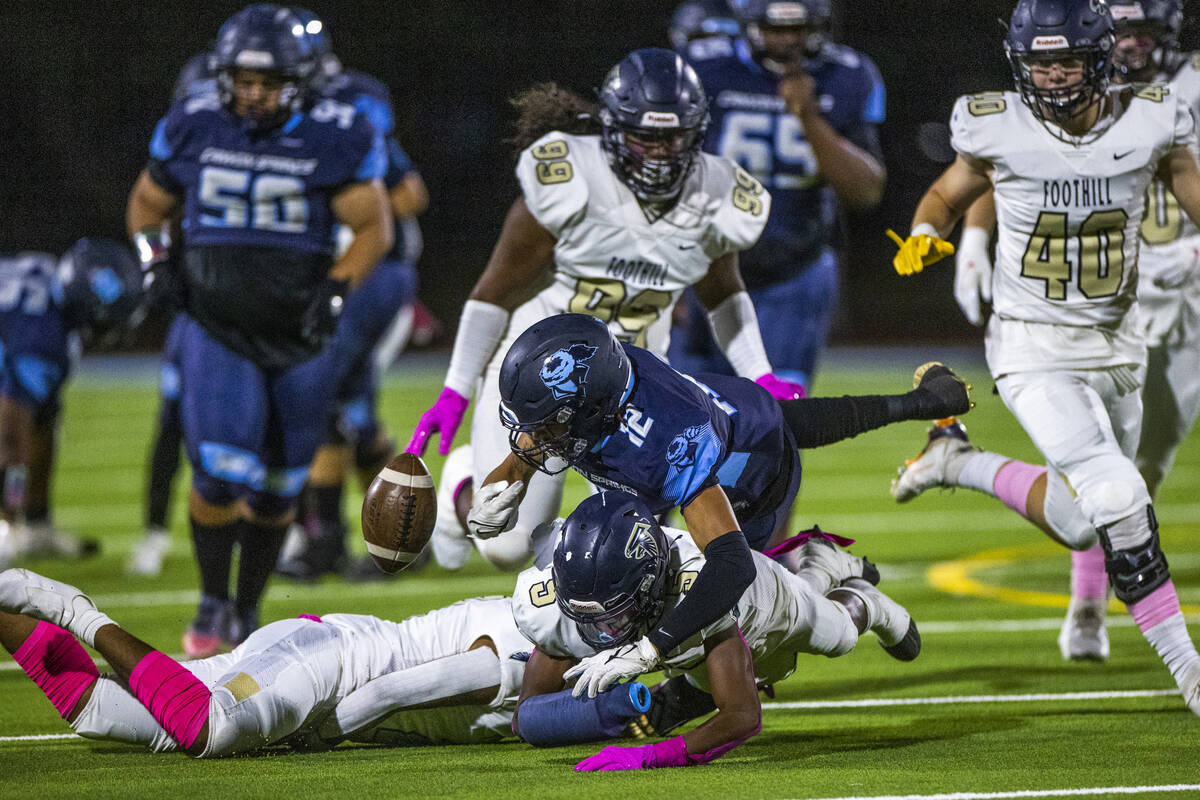 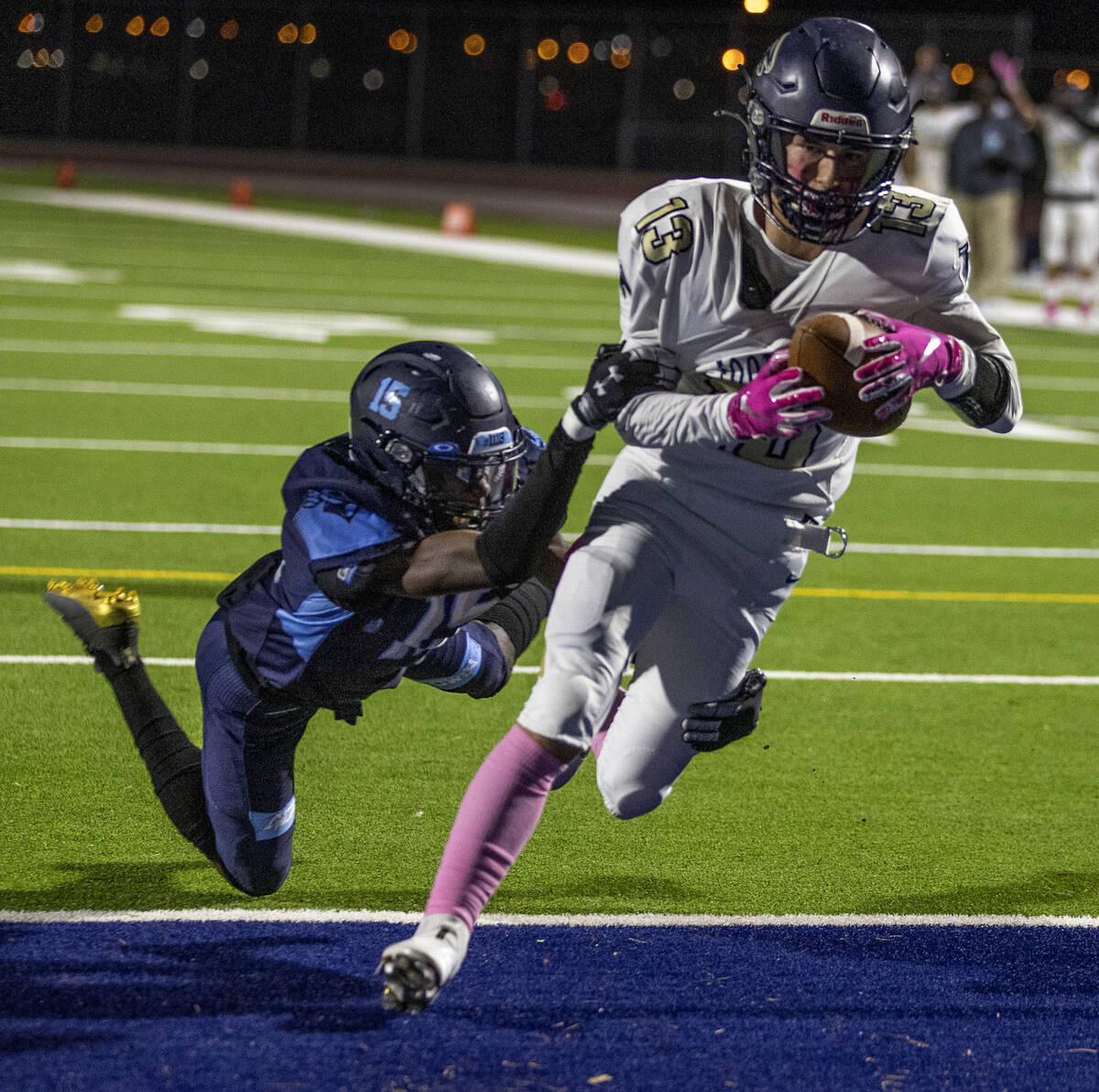 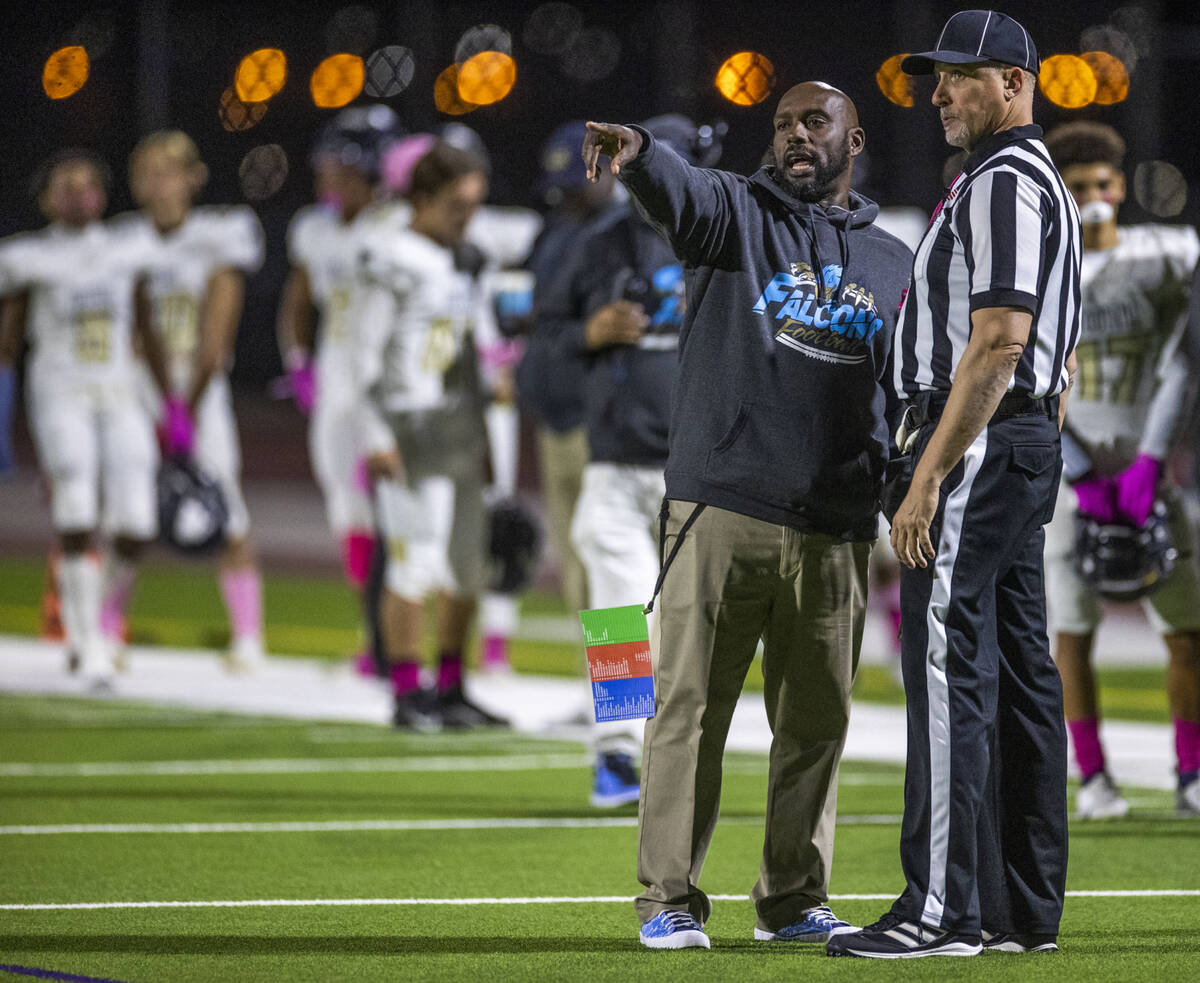 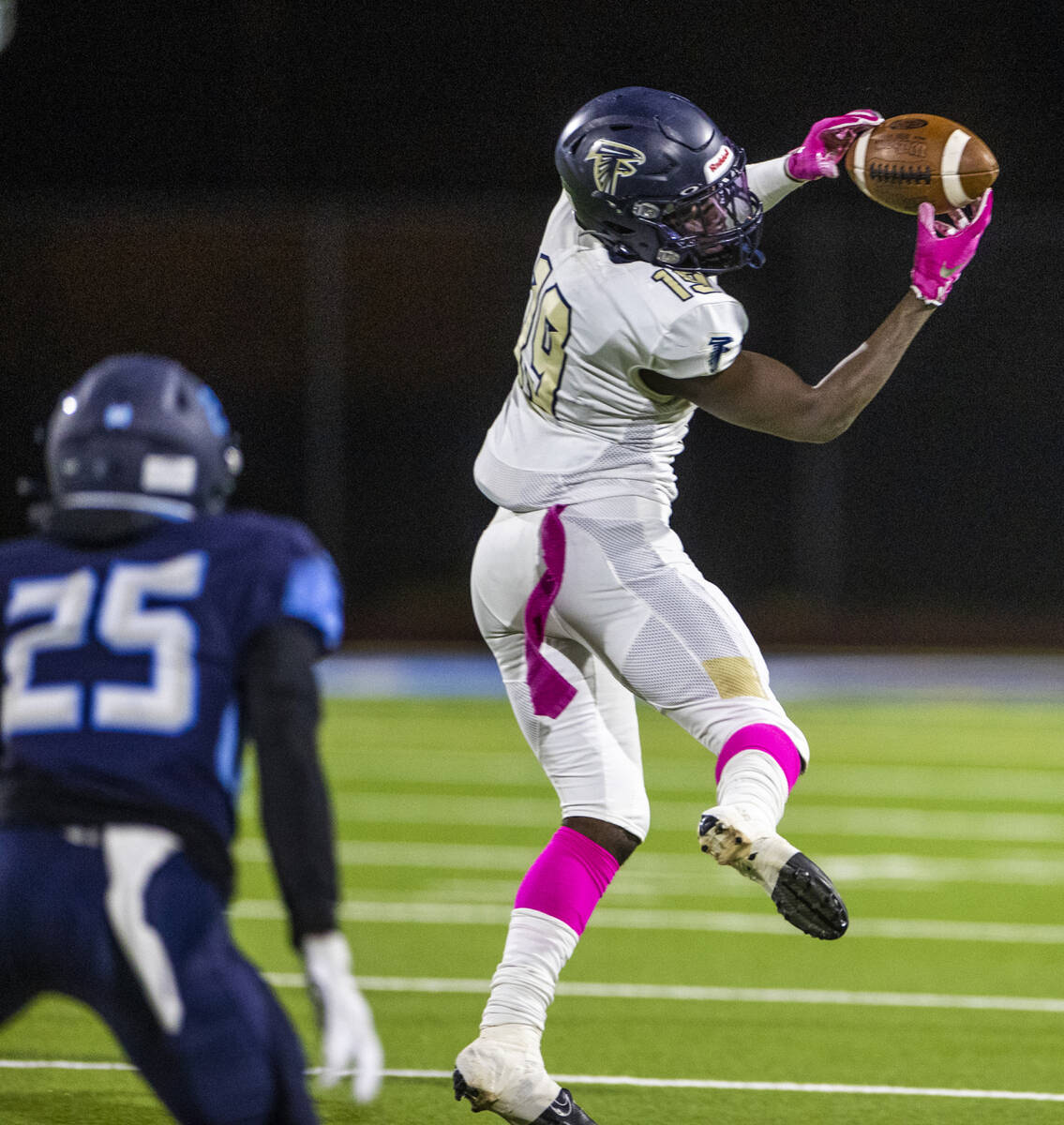 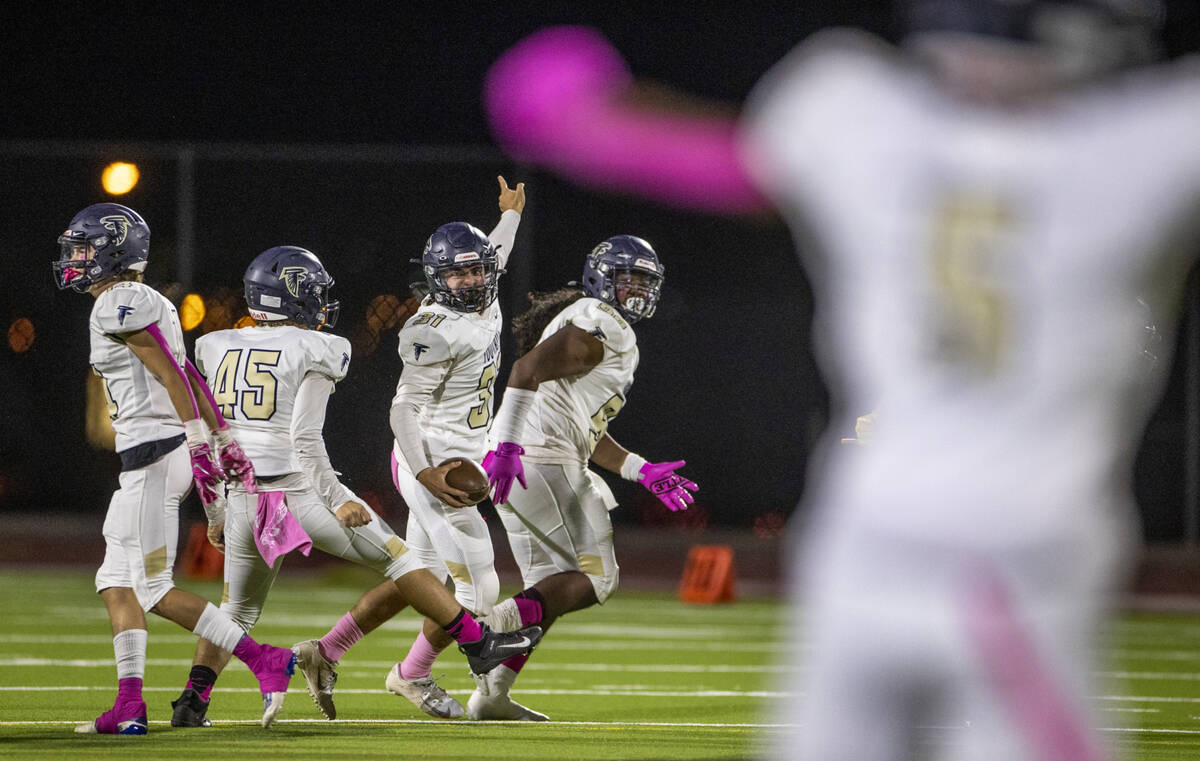 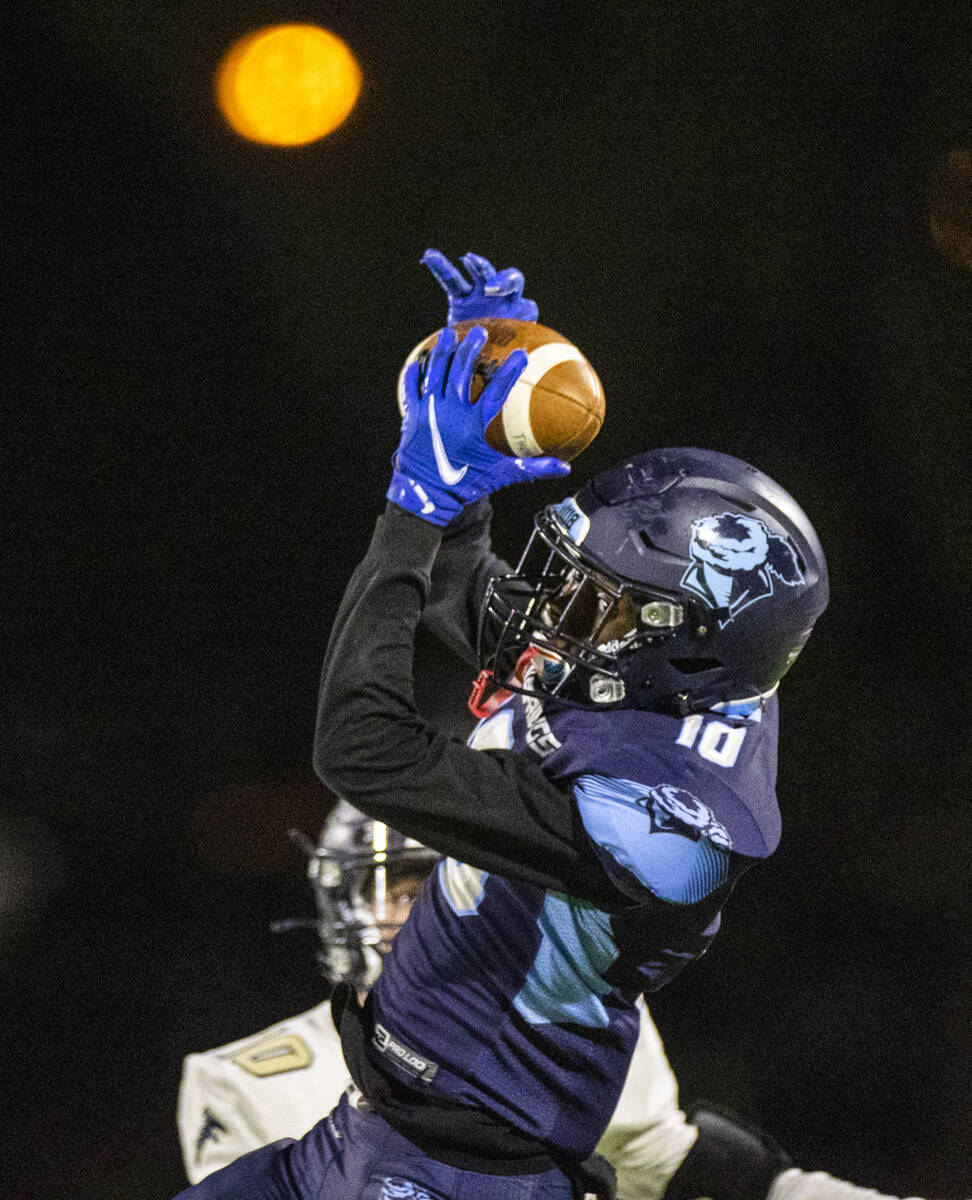 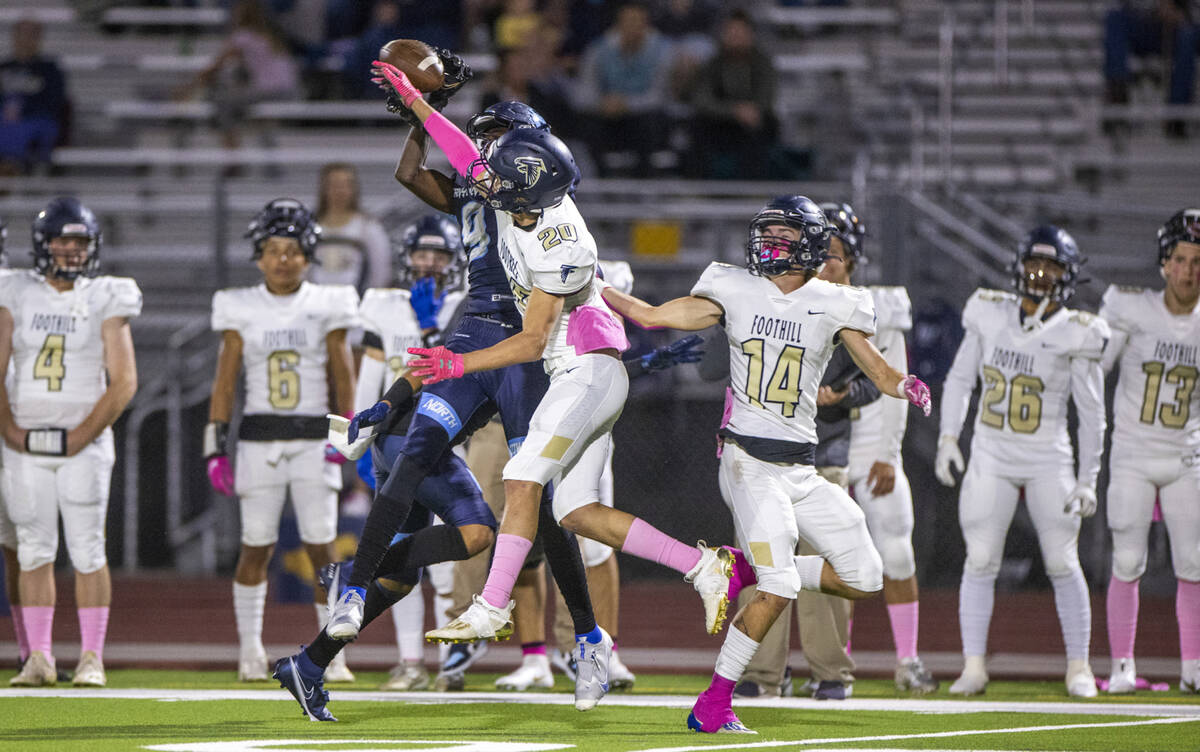 Canyon SpringsÕ Tavian A. McNair (9, left) has a pass knocked away by FoothillÕs Jason Fisher (20) during the first half of an NIAA football game at Canyon Springs High School on Friday, Oct. 15, 2021, in North Las Vegas. (L.E. Baskow/Las Vegas Review-Journal) @Left_Eye_Images 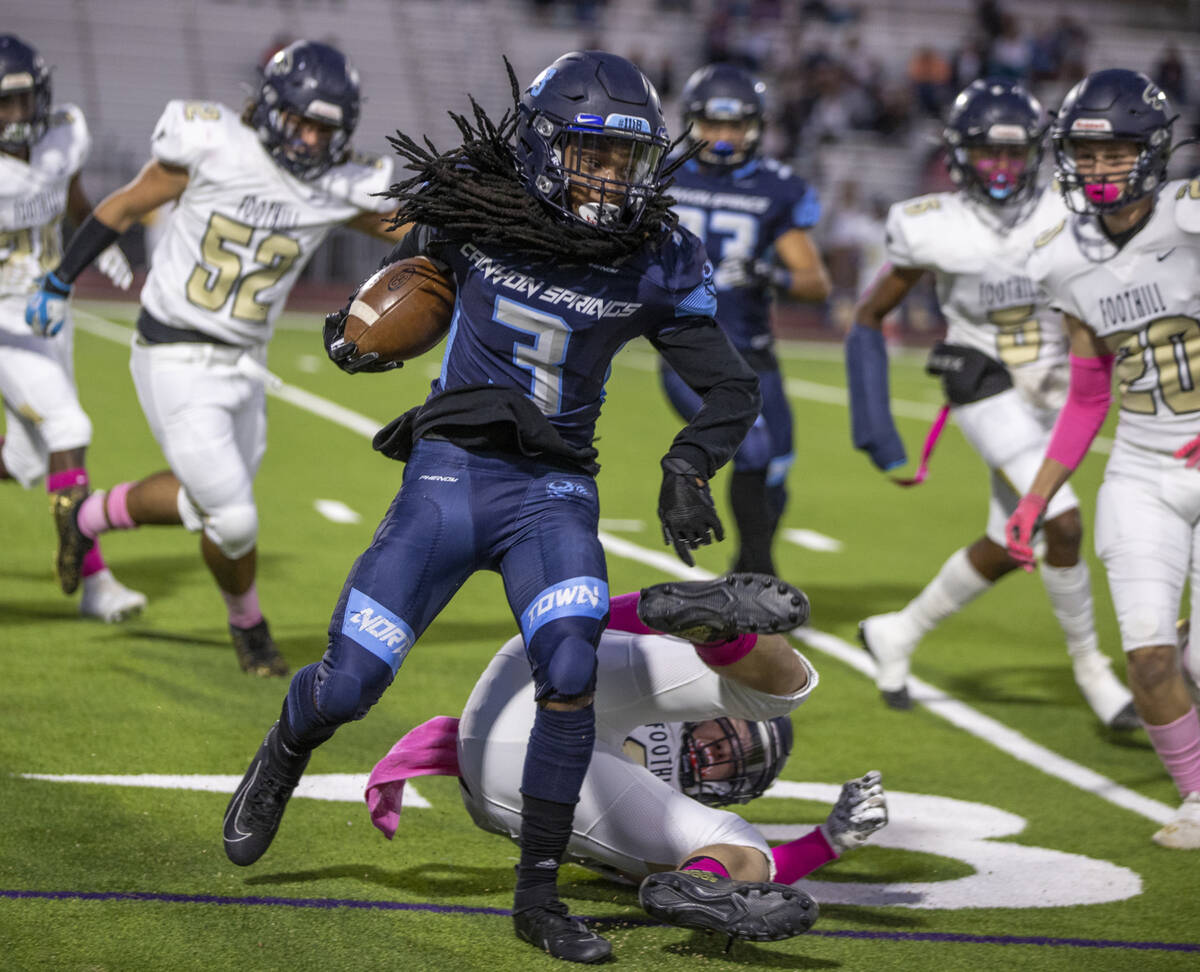 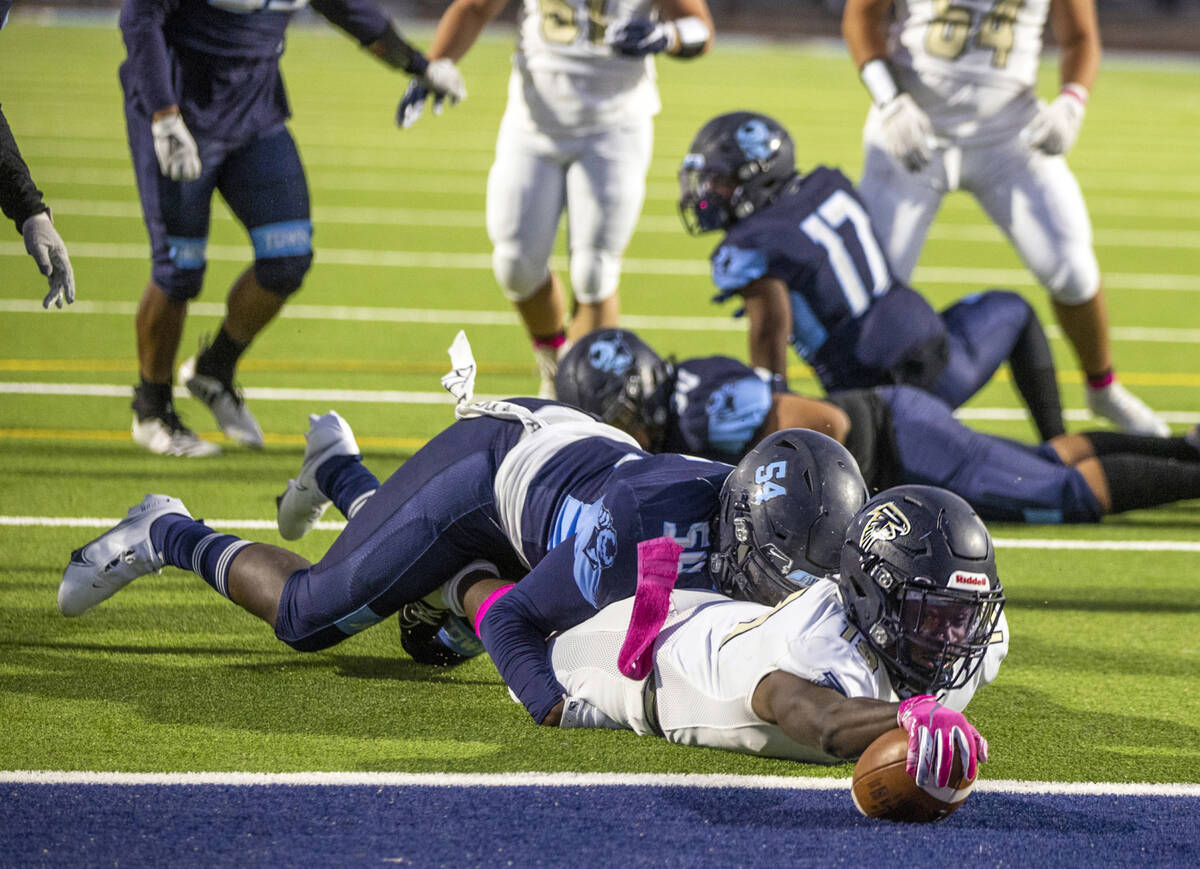 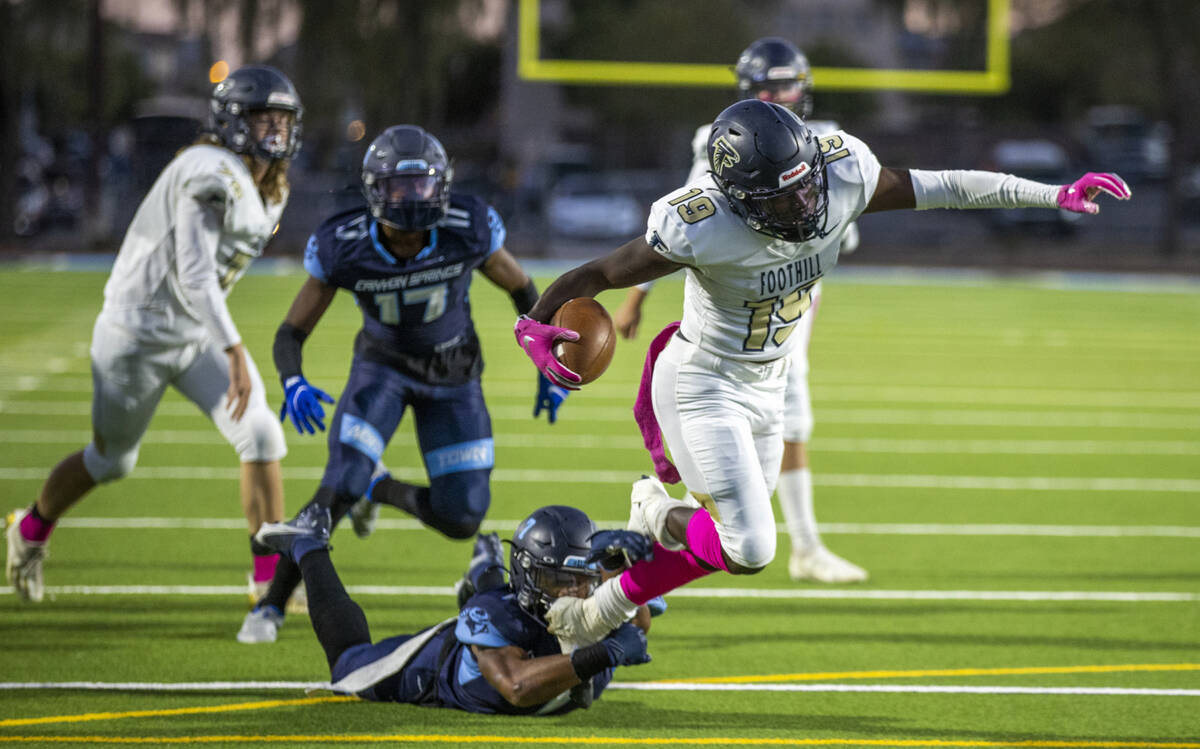 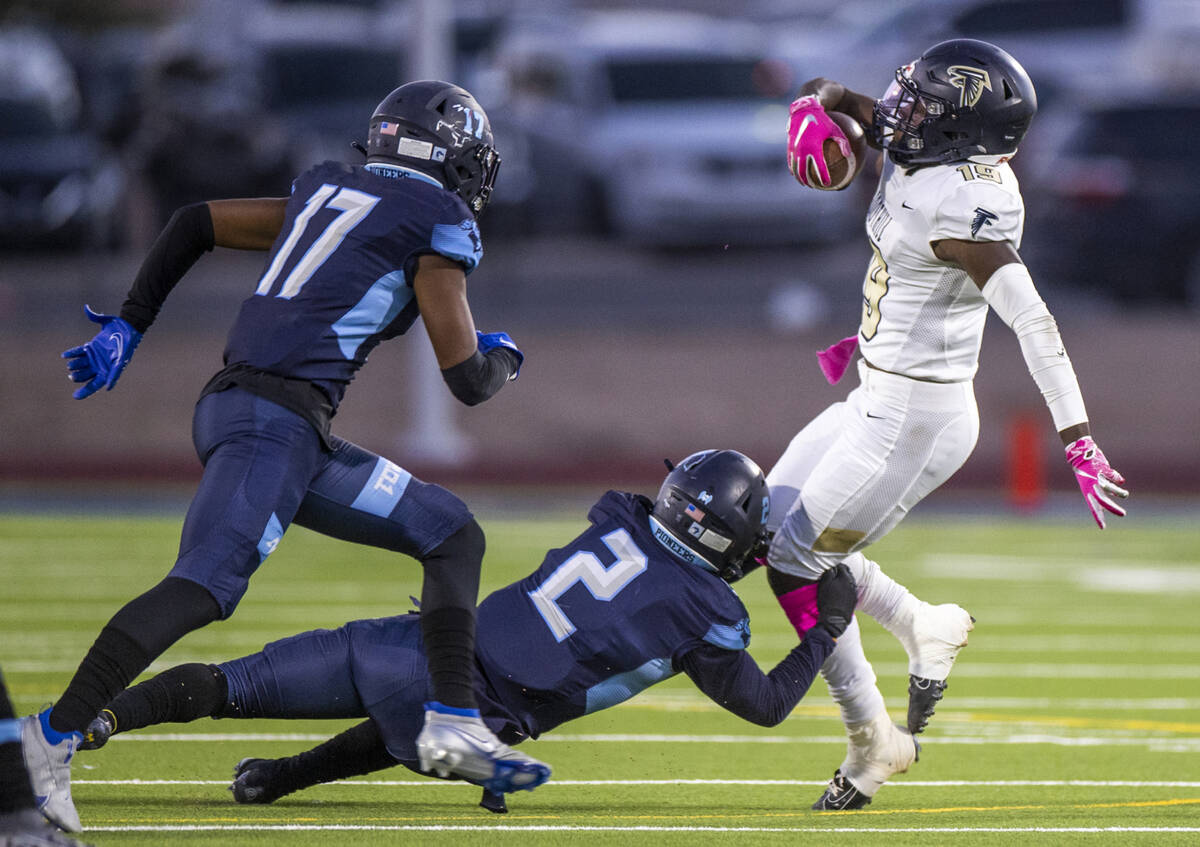 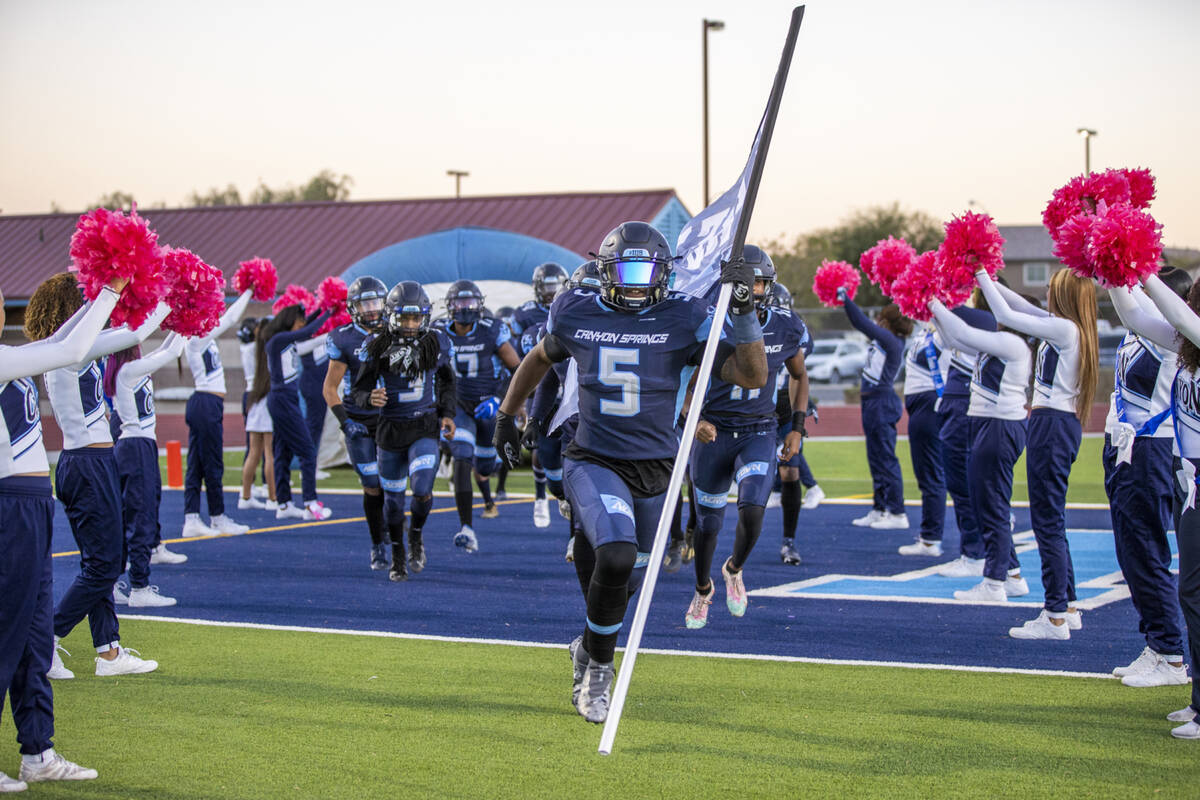 Having had three games canceled by COVID-19 this season, Foothill’s biggest problem has been just getting on the football field.

Once they make it that far, the Falcons generally do well.

Such was the case again Friday night when Cameron Paul threw three touchdown passes to complement a stingy defense that carried Foothill to a 31-0 Class 5A Desert League victory over mistake-prone host Canyon Springs at Hunkie Cooper Stadium in North Las Vegas.

“This is (only) our fifth game, so it’s hard to get a little rhythm going,” said Falcons coach Vernon Brown, whose team improved to 4-1 and 3-0 and will face juggernaut Bishop Gorman in its regular-season finale next week. “But once we get clicking, we’re a pretty good football team.”

With Canyon Springs focusing on Kendric Thomas, Foothill’s outstanding running back, Brown turned to Paul and the passing game to take control. One of three quarterbacks who have been effective in running the Falcons’ offense, Paul was intercepted twice but otherwise looked sharp in completing 19 of 32 passes for 257 yards.

“We knew that later on in the season when we played enough games, teams were going to key on him,” Brown said of Canyon Springs holding Thomas to 28 yards rushing on 15 carries. “But as you saw, we were able to hit the pass a little bit this week.”

Foothill took a 19-0 lead during a ragged first half in which there were nine penalties, three lost fumbles, two interceptions, four sacks, a successful onside kick and two apparent penalties that were ultimately waved off by the officials after lengthy discussions.

Between the many missteps and clock stoppages, the Falcons scored on a 5-yard run by Thomas in the first quarter and Paul touchdown passes of 11 and 10 yards to Michael Gazzana and Parker Beckwith in the second.

Paul hit Thomas in the flat late in the third quarter, which the latter turned into a 24-yard TD. Gazzana completed the scoring with a 36-yard punt return with 1:35 to play as Foothill recorded its first shutout and delighted its coach.

“Early in the season, we had some of the younger guys in there and the other teams were able to score,” Brown said. “So we made a concerted effort this time to preserve that shutout, just to get a good showing for our defense.”

Canyon Springs (2-5, 1-3), coming off a last-second victory against Palo Verde, made too many mistakes to hang with a good team such as Foothill, Pioneers coach Gus McNair said.