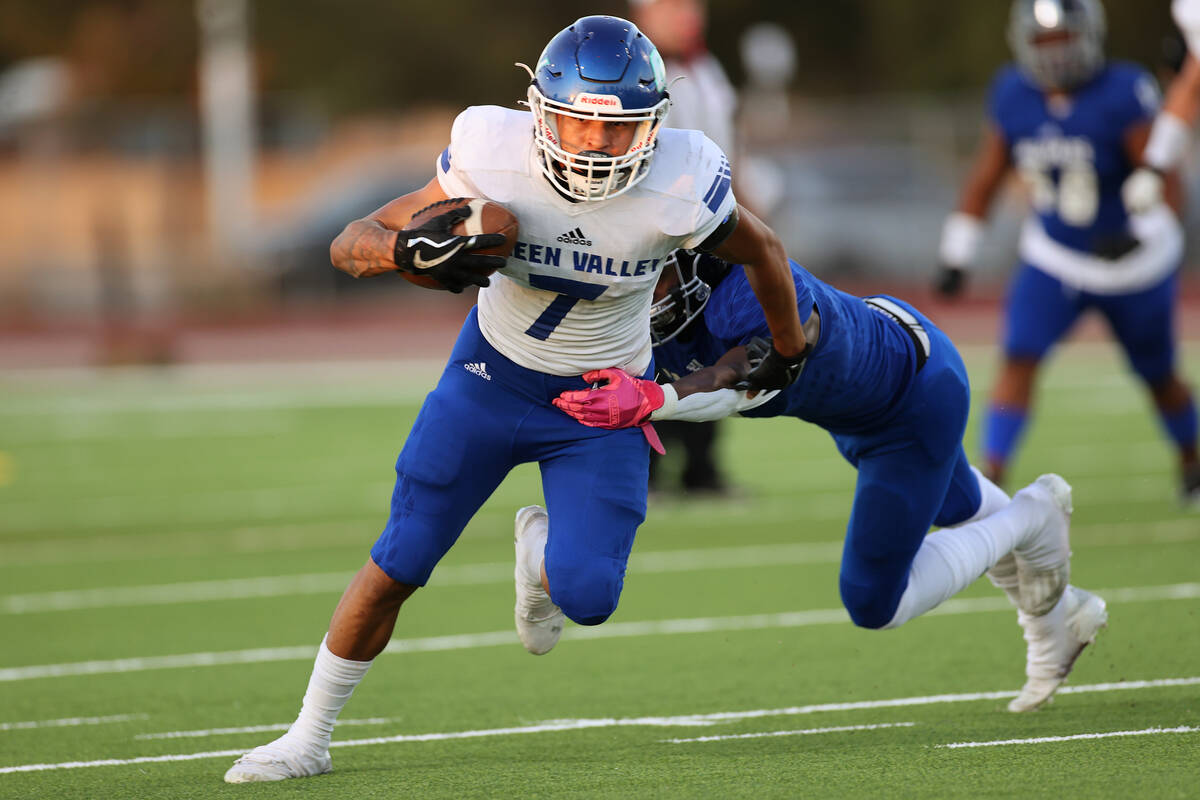 Running back Jaylen McKnight has been the headliner for the Green Valley offense through six games.

The senior has 771 yards rushing and seven touchdowns on 74 carries and 119 yards and a score on six catches. But when McKnight went out in the third quarter with an ankle injury Friday night after gaining 176 yards on 23 rushing attempts, Green Valley didn’t panic.

It simply turned to a talented junior in Josiah Edwards, and he helped get the Gators across the finish line in a 21-14 win at Desert Pines.

“He’s been great,” Green Valley coach Brian Castro said of Edwards. “He’s a guy we feel we can put in any time during the game. Jaylen is doing a great job, so that probably doesn’t happen as much as he’d like, but it’s huge when we can put a fresh guy in there.”

Edwards scored a 1-yard touchdown that tied the game and had timely runs in the fourth quarter, such as a 7-yarder on third-and-6 to pick up a first down and keep the clock moving, on his way to a 52-yard rushing night. Edwards’ totals don’t jump off the page, but they were huge in terms of what they meant for the Gators.

Castro said keeping McKnight out was a precaution and that he always had confidence in Edwards. But there’s a difference between being confident a player can get the job done and seeing it happen. Edwards rewarded his coach’s confidence and might have carved out a bigger role.

“We felt last night like he was ready to go,” Castro said. “He can do a lot of things. He can line up at receiver and catch the ball. He can catch the ball out of the backfield. He’s shifty and can make guys miss.”

It was the Mountain League opener for the Gators (5-1, 1-0), and getting this win was huge with a home game against Liberty looming next.

“That’s always a big and tough test,” Castro said. “They do a great job over there of getting their kids ready to play, and they have a lot of talented young men. Our kids will be excited for the challenge. We play Liberty every year, so our guys know what that challenge presents. They’ll give it their best.”

Green Valley wasn’t the only team that had to use its depth to win. Foothill quarterbacks Jack Thow and Billy Morse combined to go 17 of 22 for 170 yards and three touchdowns, and Thow ran for a score in a 32-12 win over Legacy.

Desert Oasis had “a half JV team,” coach Brant Smith said, on the field because of COVID-19 protocols and dug out of a two-touchdown deficit after the first quarter for a 42-39 win.

This was the first week in which no varsity football games in Southern Nevada were canceled because of COVID-19 protocols.

Over the past two weeks, only the Del Sol at Durango game has been canceled. That’s a number trending in the right direction after there had been 100 games played and 31 canceled through Week 5.

There were several candidates, including Desert Oasis’ win over Chaparral when Tyler Stott and Isaiah Flasher connected on a winning 31-yard TD with nine seconds left and Eldorado’s 15-14 win over Boulder City.

But let’s go to Basic, where the Wolves and Las Vegas battled back and forth all night. Neither had a two-score lead, and it wasn’t decided until Basic missed a field goal with about two minutes left and Las Vegas ran out the clock.

The difference was the Wolves missed the extra point after their last score, and the Wildcats made theirs after Adonis Jackson’s third touchdown, a 2-yard plunge with about five minutes left.

Along with the Green Valley at Liberty game Friday, there are two other important 5A games, both in the Desert League. Arbor View will travel to Foothill on Friday, with the winner moving into second place, and Palo Verde goes to Canyon Springs on Thursday, with both teams trying to avoid an 0-3 league start.

In 4A, the game of the week is Coronado hosting Shadow Ridge on Friday. Both teams are 2-0 in the Sky League, and the winner figures to have a clear path to the title.