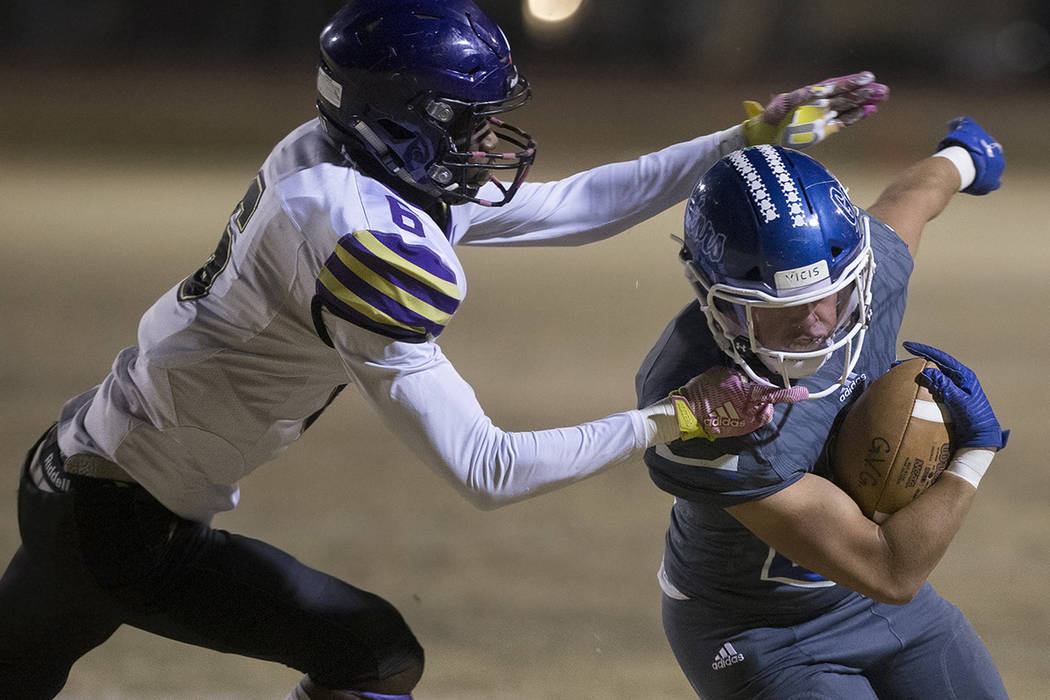 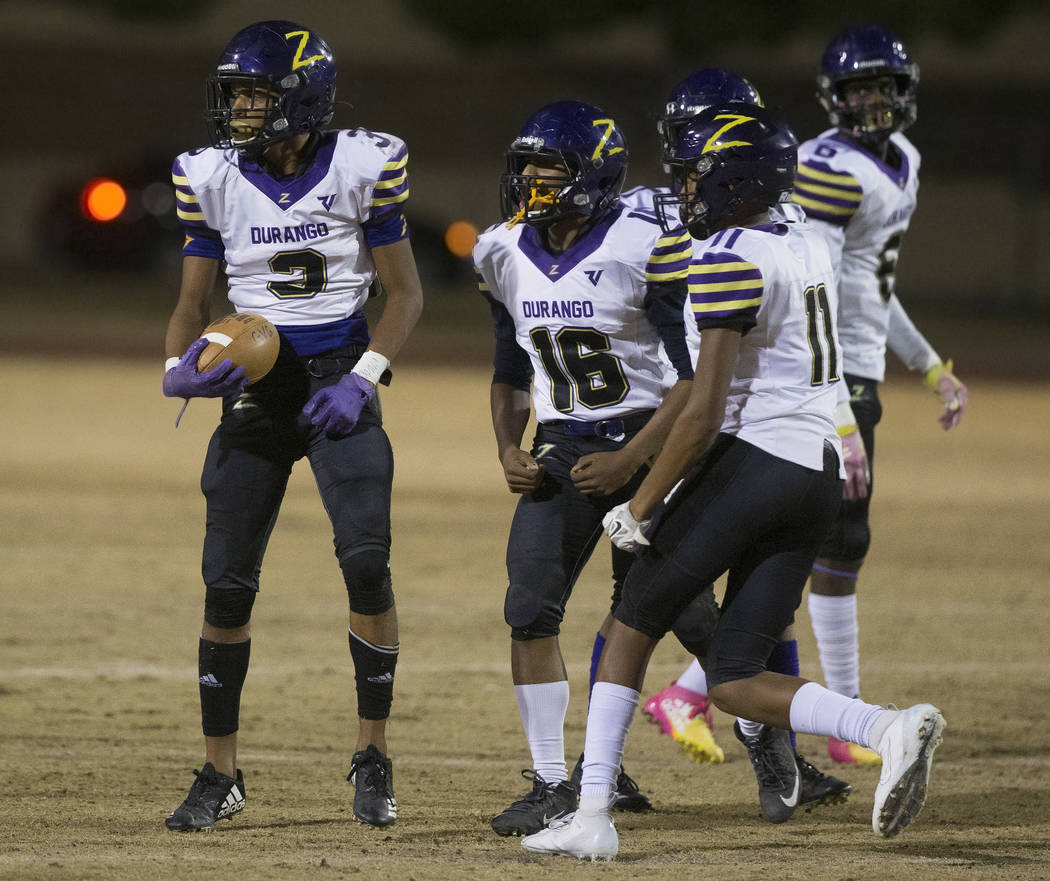 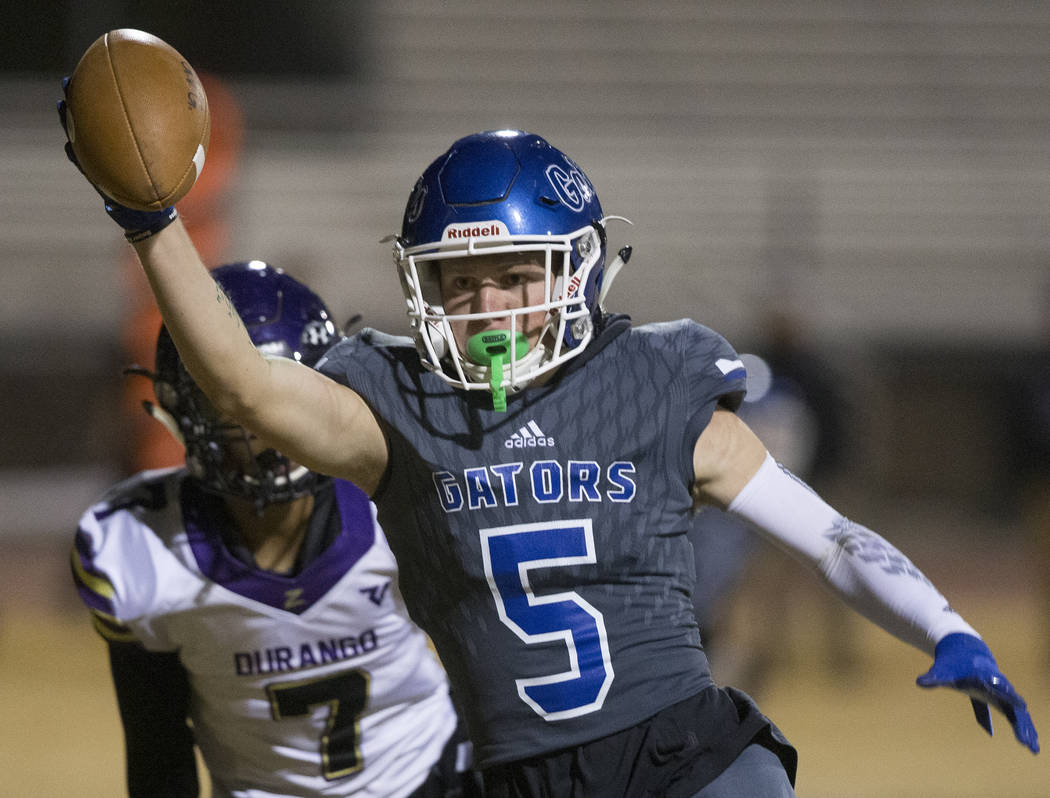 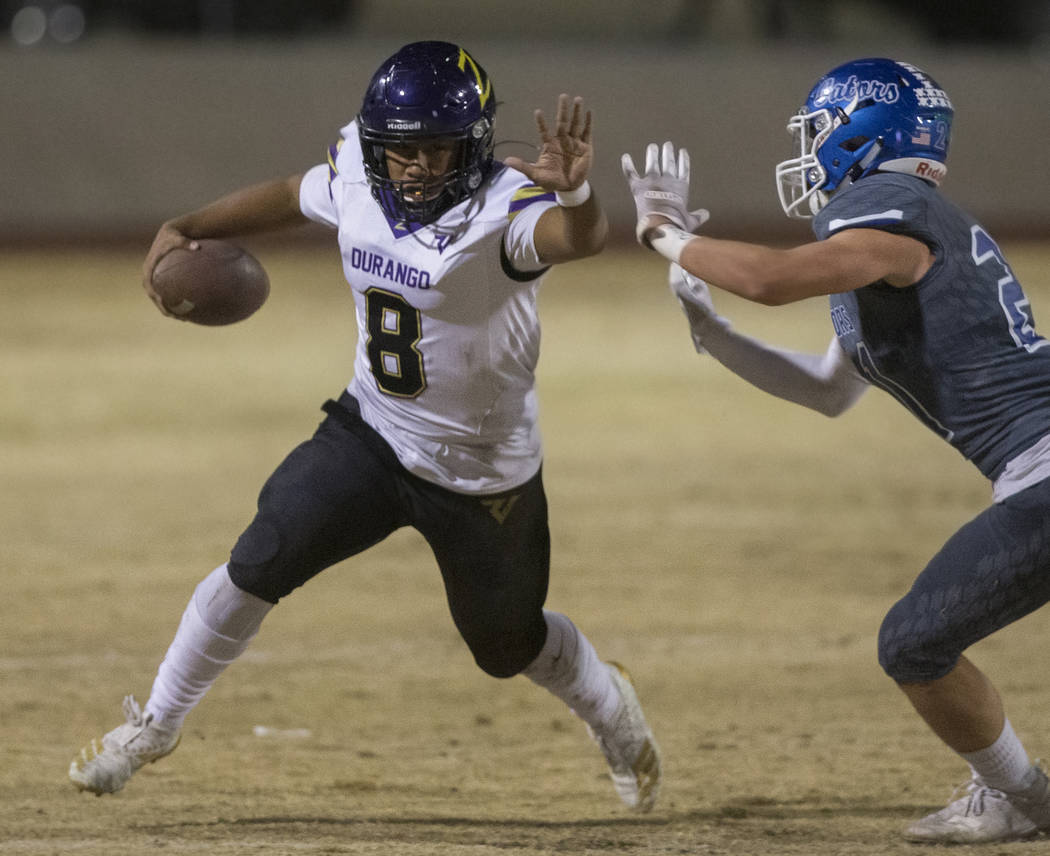 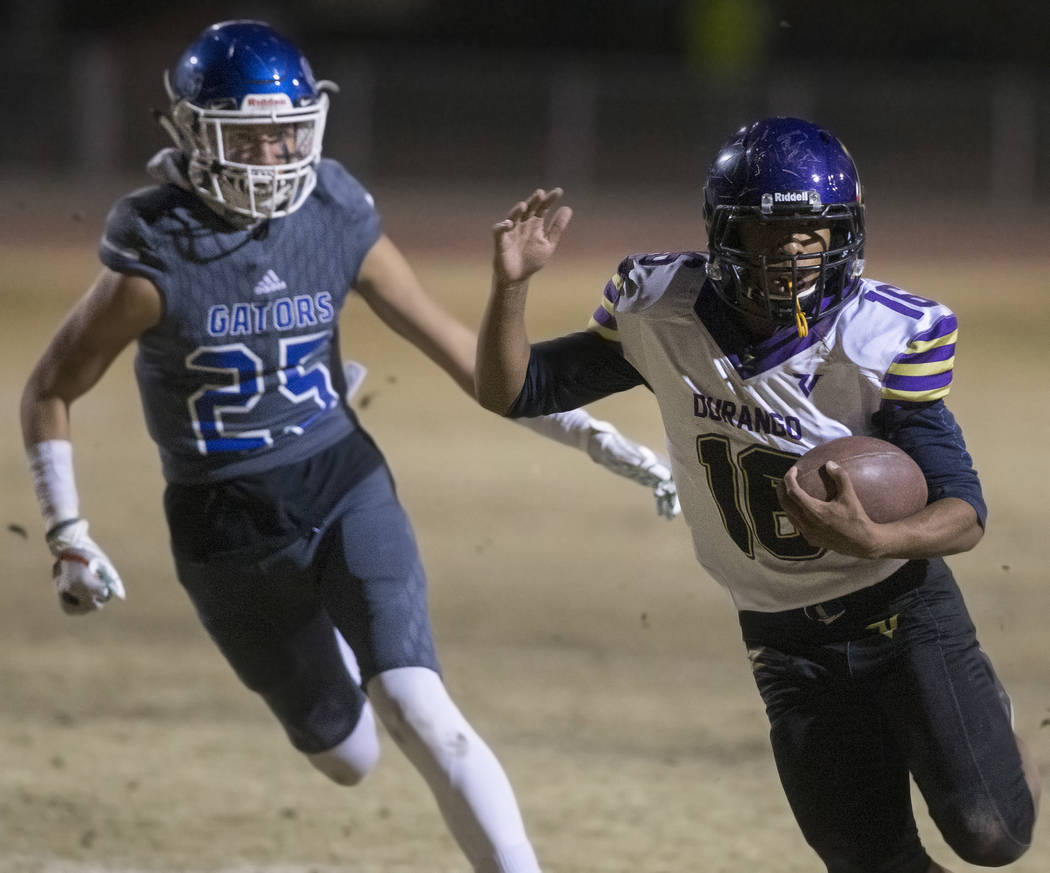 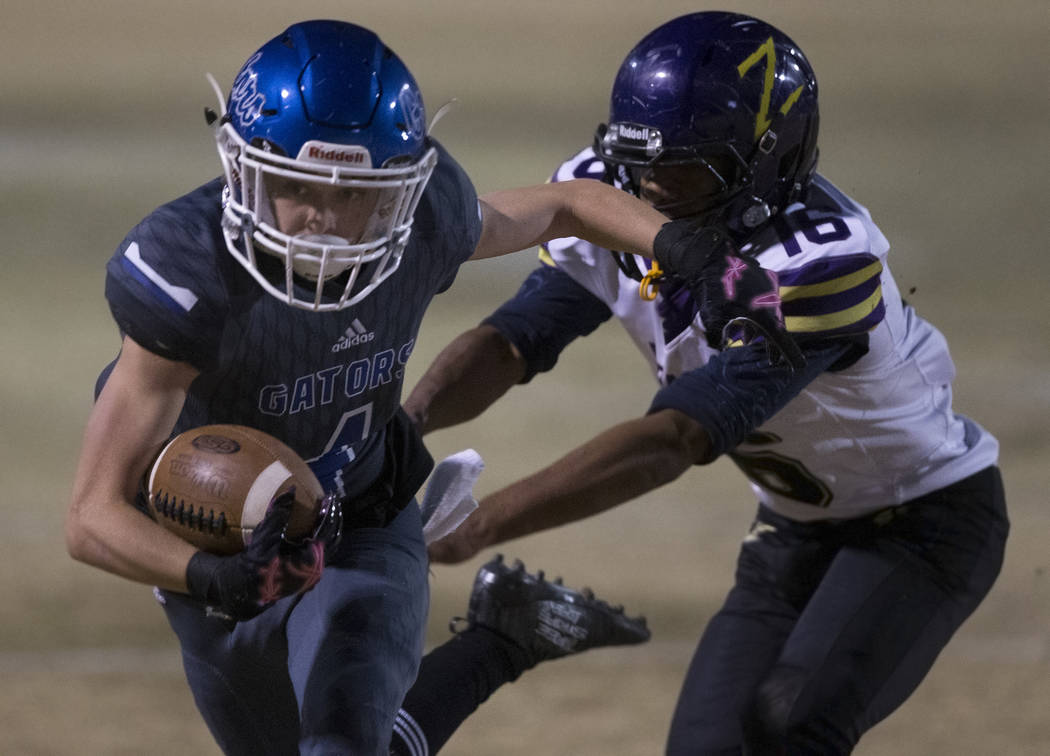 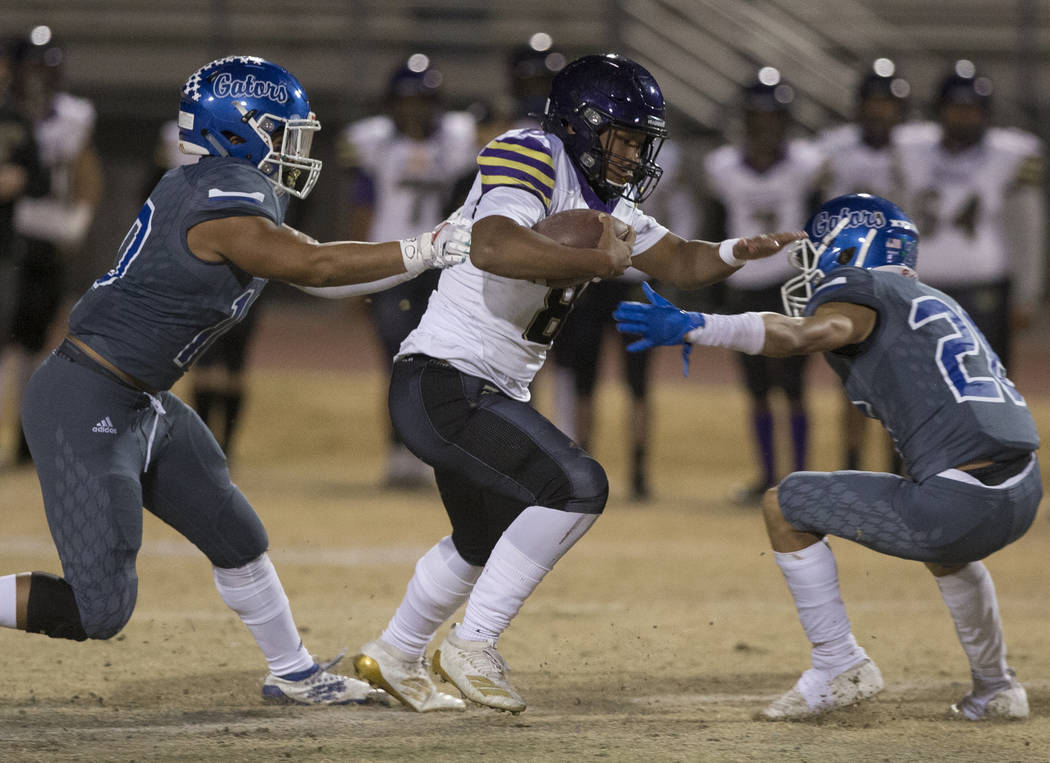 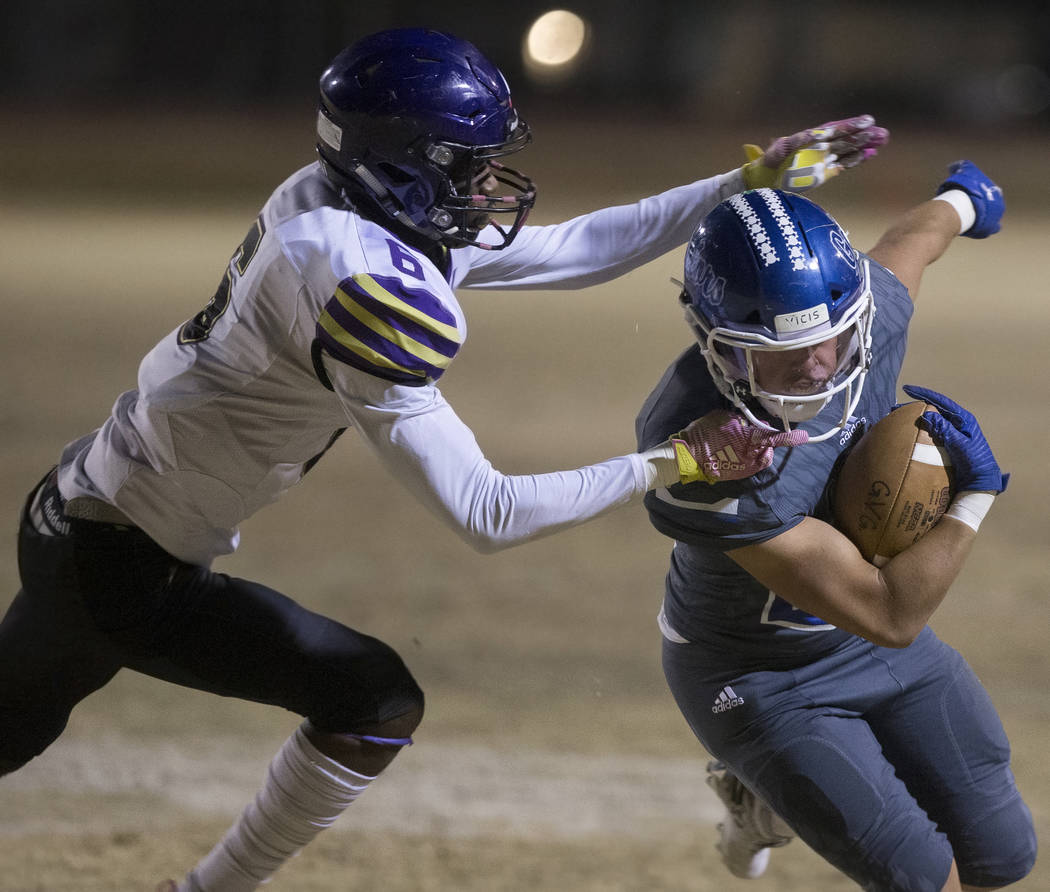 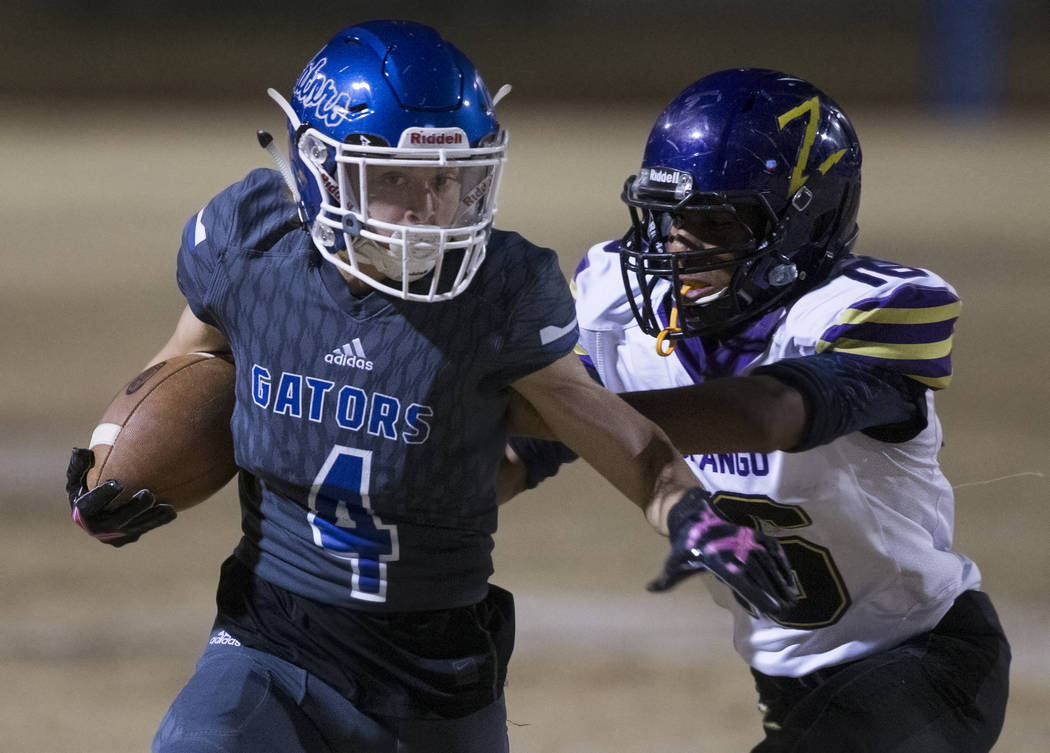 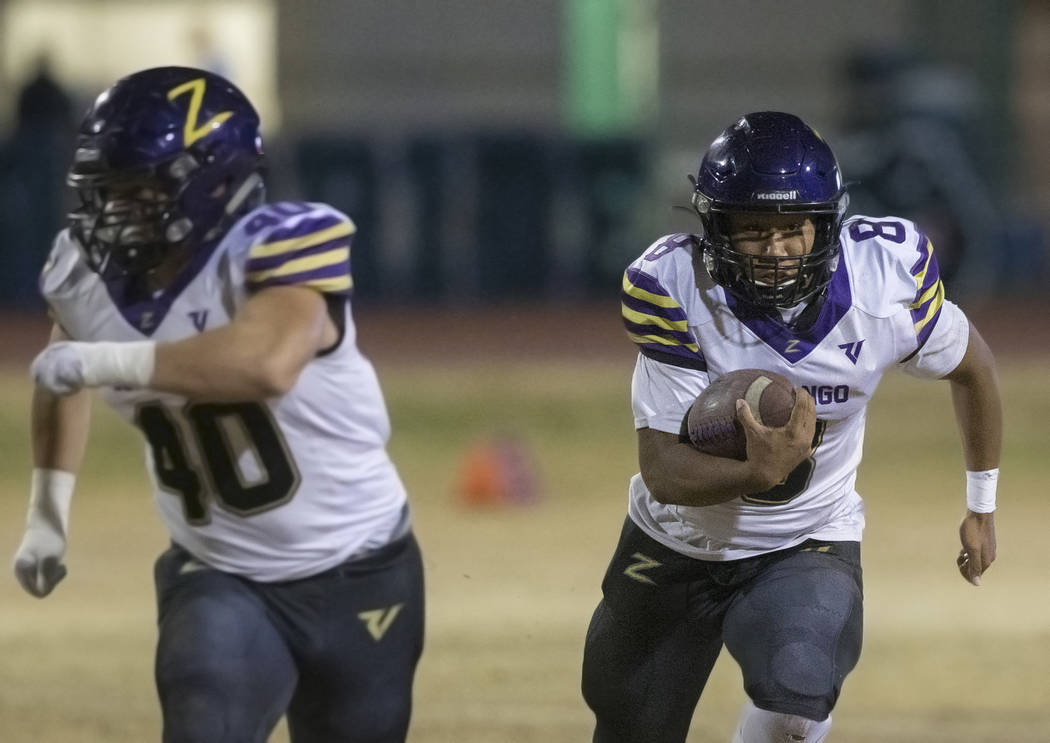 Durango's Ryan Cabase (8) scrambles for a first down with blocker Jayden Marquez (40) in the lead in the second quarter during their road game with Green Valley on Friday, Oct. 8, 2019, at Green Valley High School, in Las Vegas. (Benjamin Hager/Las Vegas Review-Journal) @benjaminhphoto 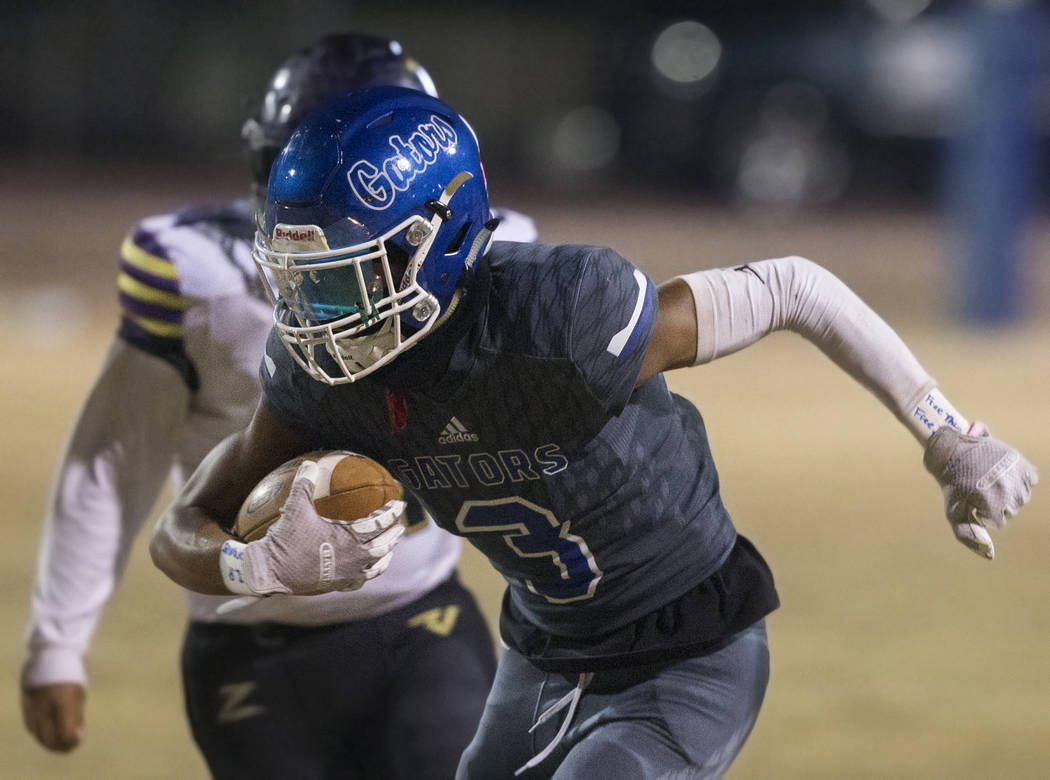 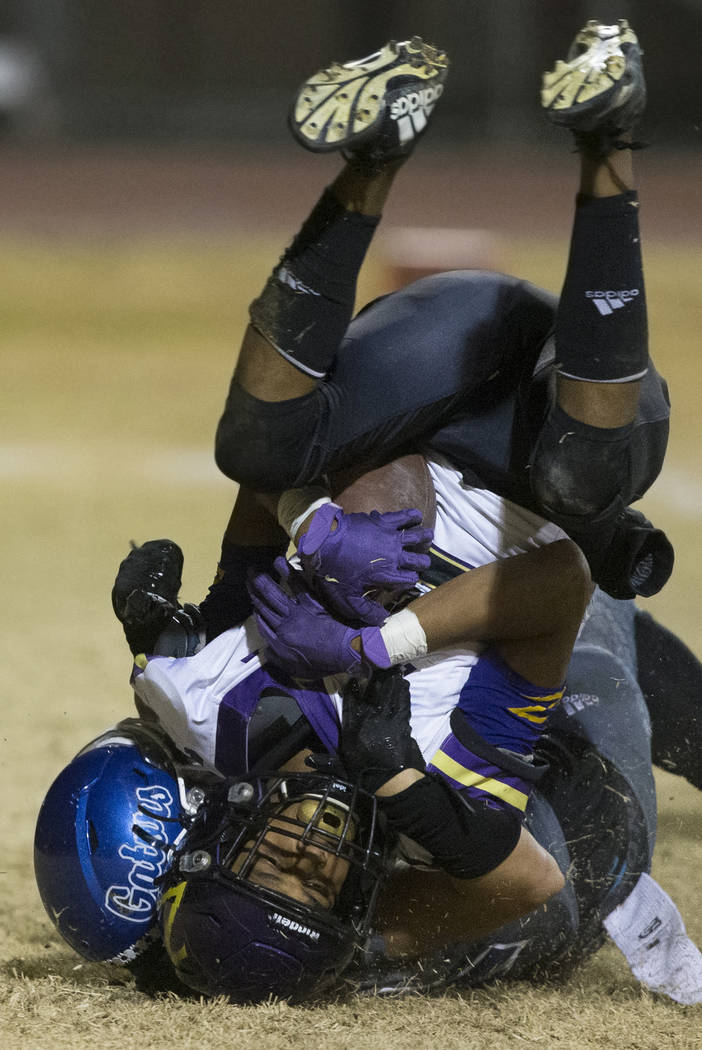 Durango's Jaxon Young (3) hits the ground hard with Green Valley's Stetler Harms (2) on his back after making a fourth down reception in the second quarter on Friday, Nov. 8, 2019, at Green Valley High School, in Las Vegas. (Benjamin Hager/Las Vegas Review-Journal) @benjaminhphoto 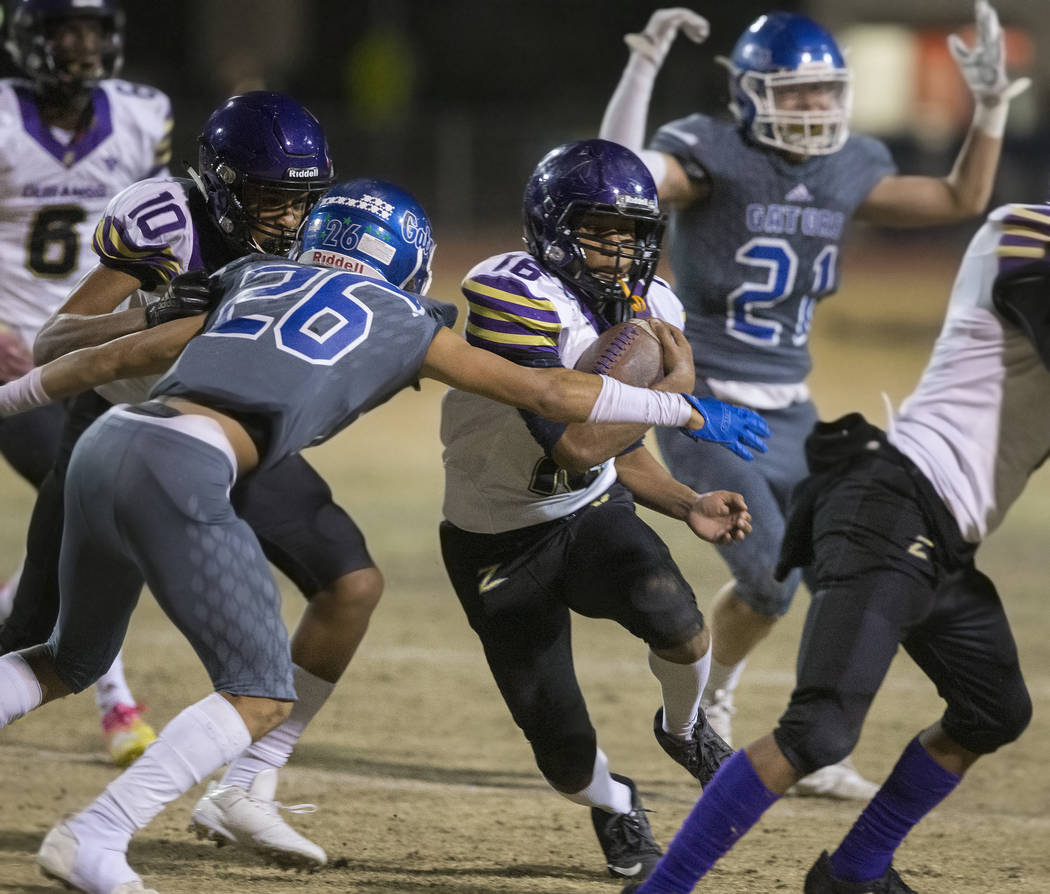 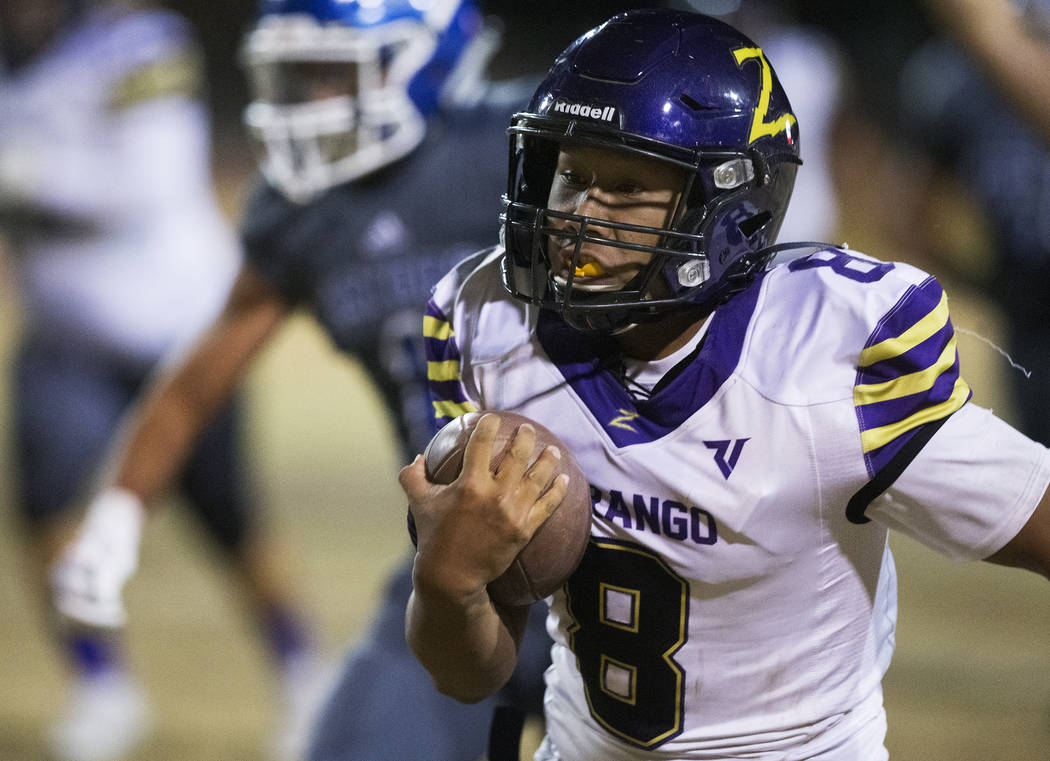 Durango's Ryan Cabase (8) streaks down the sideline for a big run in the first quarter during their road game with Green Valley on Friday, Oct. 8, 2019, at Green Valley High School, in Las Vegas. (Benjamin Hager/Las Vegas Review-Journal) @benjaminhphoto 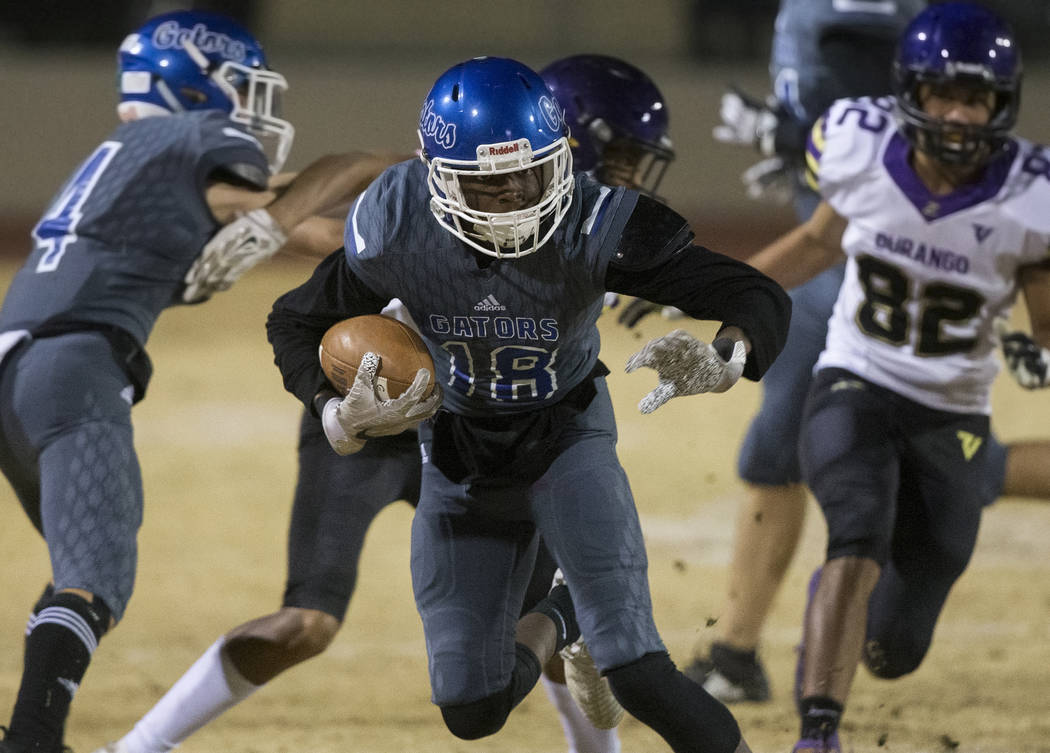 When Durango and Green Valley met Aug. 30, the Gators rolled to a 36-point victory.

Seventy days later, the two faced each other again. It was same song, second verse for Green Valley.

Senior running back Noah Hawthorned rushed for 176 yards and three touchdowns and the Gators never looked back in taking a 34-6 win over the Trailblazers in a Desert Region quarterfinal game Friday night at Green Valley.

With the win, Green Valley (7-4) will travel to 10-time defending state champion Bishop Gorman next week.

Durango (4-7) tried its best to make the game interesting midway through the second quarter. Down by 15, Durango was in the process of a long drive, going 15 plays and taking almost eight minutes off the clock. During the march, however, the Trailblazers lost two key offensive players, including quarterback Ryan Cabase.

That drive ended with a fourth-down pass from backup Cameron McIntyre going through the end zone, and Green Valley enjoyed a 21-6 halftime lead.

That drive also took the wind out of the Durango offense, as the Trailblazers mustered just 36 yards following that series.

“That was a key stand just before halftime,” Green Valley coach Brian Castro said. “Sometimes, you just don’t know how kids are going to respond to situations. It’s always tough to beat a team twice, especially one who never quits like Durango.”

Green Valley opened the third quarter with a long drive of its own, 71 yards in 16 plays taking just under seven minutes. Hawthorne finished the drive with a 10-yard run, and the Gators started looking ahead to Gorman.

Hawthorne put an exclamation point to his big night with a 3-yard scoring run with just over six minutes remaining.

Quarterback Garrett Castro tossed a pair of touchdowns — 15 yards to Colin Rerecich and 18 yards to Carlen Wallace — and threw for 182 yards.

Durango’s only score was on an 18-yard run by Sebastian Plascencia, who finished with 71 yards on 13 carries. Cabase had 80 yards rushing on eight tries before leaving the game with a knee injury with just under five minutes left in the second quarter.