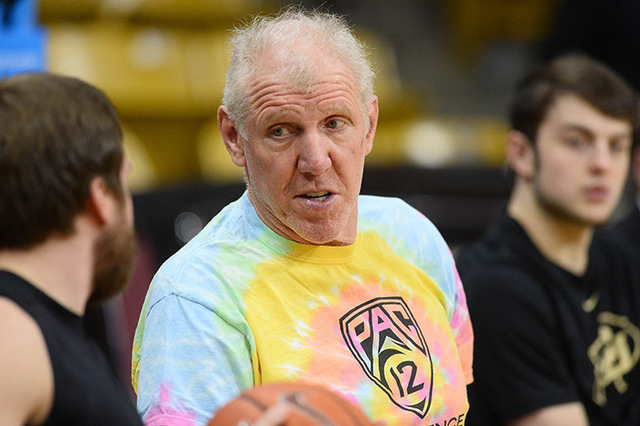 Retired basketball player and current Pac 12 Networks analyst Bill Walton interviews a player prior to a game between the Arizona Wildcats and the Colorado Buffaloes at the Coors Events Center. (Ron Chenoy-USA Today Sports)

When he telephones his 89-year old mother, which he does daily, she always asks two questions.

“Billy, who would have ever thought? …”

Then they talk some more.

I’m not sure Gloria Walton’s son ever considered talking about his passions and dreams and purpose as work. Never put a timer on Bill Walton when he gets going, because his message is too important to him for it to include punching a clock.

The basketball Hall of Famer and oh-so-authentic broadcaster and rock and roll aficionado will act as guest speaker for the Review-Journal’s first Best of Nevada Preps Award Banquet on Saturday in the Summerlin Ballroom at Red Rock Resort.

Athletes from more than 100 schools and 24 sports across the state will be honored, including the top male and female, along with coach of the year.

Know this: I’m not sure what Walton will say, but it will be memorable.

You might go from salad to dessert without remembering the main course.

“For all of those young people being honored, this is an opportunity for building their lives and chasing their dreams and creating a new future, not only for themselves, but for all of us,” Walton said. “An opportunity to be part of something special. I will never forget this night. I am fired up. I’m ready to go. This is a celebration of life.

“On Saturday, June 4, in a place that years ago was nothing but a dust field of cactus and tumbleweed, now a beautiful shrine at a fantastic resort and a pillar of the community, it will become a night of dreams and hope and optimism of forging paths of how to work together to make this world a better place. There is no better avenue than sports to provide such opportunity.”

OK, so I have a pretty good idea what he might say.

Walton is 63 and a grandfather seven times (and counting), one of the greatest players basketball has known and whose style when analyzing the game is best described as unconventional. He is just as apt to slip into a tale about certain stops along the course of the Tour de France or one of the 800 times (and counting) he has seen the Grateful Dead perform as he is to critique shot selection or praise effort.

Those athletes who will be honored will have not seen Walton play at either UCLA or in the NBA, not seen him win championships at both levels, not seen the guy who made 21 of 22 shots in the 1973 NCAA final against Memphis State.

But they should know this story:

After watching Walton play for the first time, a game in which he went for 50 points and 34 rebounds against Pasadena High, then-UCLA assistant coach Denny Crum returned to campus and headed straight for the office of legendary coach John Wooden.

Crum: “Coach, I just watched the greatest high school player I have ever seen in my life.”

(For all the young folks, that’s Kareem Abdul-Jabbar).

Wooden: “Keep your voice down and shut the door.”

Walton was that great.

But perhaps you have to face the darkest of times and sink to the deepest of depths to emerge with the sort of continuous level of positive energy he now maintains. Walton has seen hell and lived to tell about it, years of his life spent in the most painful and debilitating of ways through nearly 40 back surgeries.

His spine failed and then just collapsed.

“The thing about Bill is, no matter what challenge or obstacle he faced in life, he has always conquered it,” said Nick Canepa, longtime sports columnist for the San Diego Union-Tribune who has known and covered Walton for the better part of four decades. “You can’t imagine the pain he went through with his back — he would literally be crawling around his house because he couldn’t stand — but he eventually found the right doctor some years ago and overcame it. Bill is a wonderful person who does more for others than most anyone. He is tireless in that way.

“Now, if this is a night banquet he’s speaking at in Las Vegas, tell whoever might be writing the story about it they have no chance to make deadline. It took Bill into his 20s to totally overcome a serious speech impediment, and now he never shuts up.”

It’s part of what makes Bill Walton today. The man who stuttered through childhood, college, and his professional career absolutely loves talking.

His sons (Adam, Nate, Luke and Chris), who range in age from 34 to 40, are all married with children. Walton gushes about his boys, how proud he is of the men and husbands and fathers they have become, about how they are all close friends, happy for the success of each other and concerned when struggles or failures find any of them.

He still credits all those who coached him, from Frank “Rocky” Graciano at Blessed Sacrament in 1960 to Gordon Nash at Helix High in the San Diego County town of La Mesa to Wooden at UCLA. He still talks about his heroes in and out of basketball — his parents, Wooden, Bobby Kennedy, Martin Luther King Jr., Bill Russell, Chick Hearn, Bob Dylan, Neil Young, Carlos Santana, The Beatles, Crosby, Stills & Nash, the Rolling Stones …

And, of course, the Grateful Dead.

“We had nothing growing up but we had everything,” Walton said. “We had school, we had sports, we had music, we had books, we had hopes and dreams about what tomorrow would bring. I had no idea. I had no plan. But what I had was a foundation built by other people, by my parents and coaches. I had those overarching forces of good in my life.

“Now, our job is to make sure the hopes and dreams of the next generation, of young men and women athletes like those being honored in Nevada, have a chance at coming true.

“I’m the luckiest guy in the world to be able to send this message.”