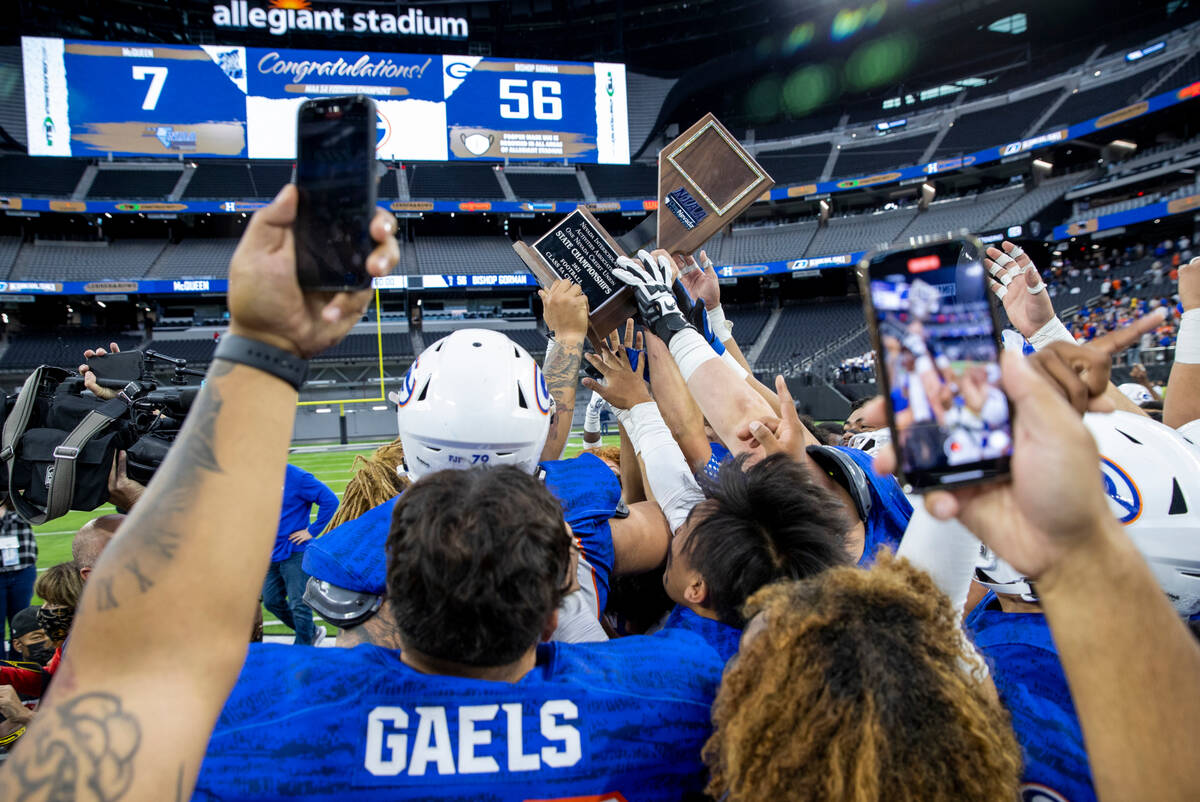 Bishop Gorman players and coaches hoist the trophy together on the field after beating McQueen in their Class 5A football state championship game at Allegiant Stadium on Thursday, Nov. 18, 2021, in Las Vegas. (L.E. Baskow/Las Vegas Review-Journal) @Left_Eye_Images 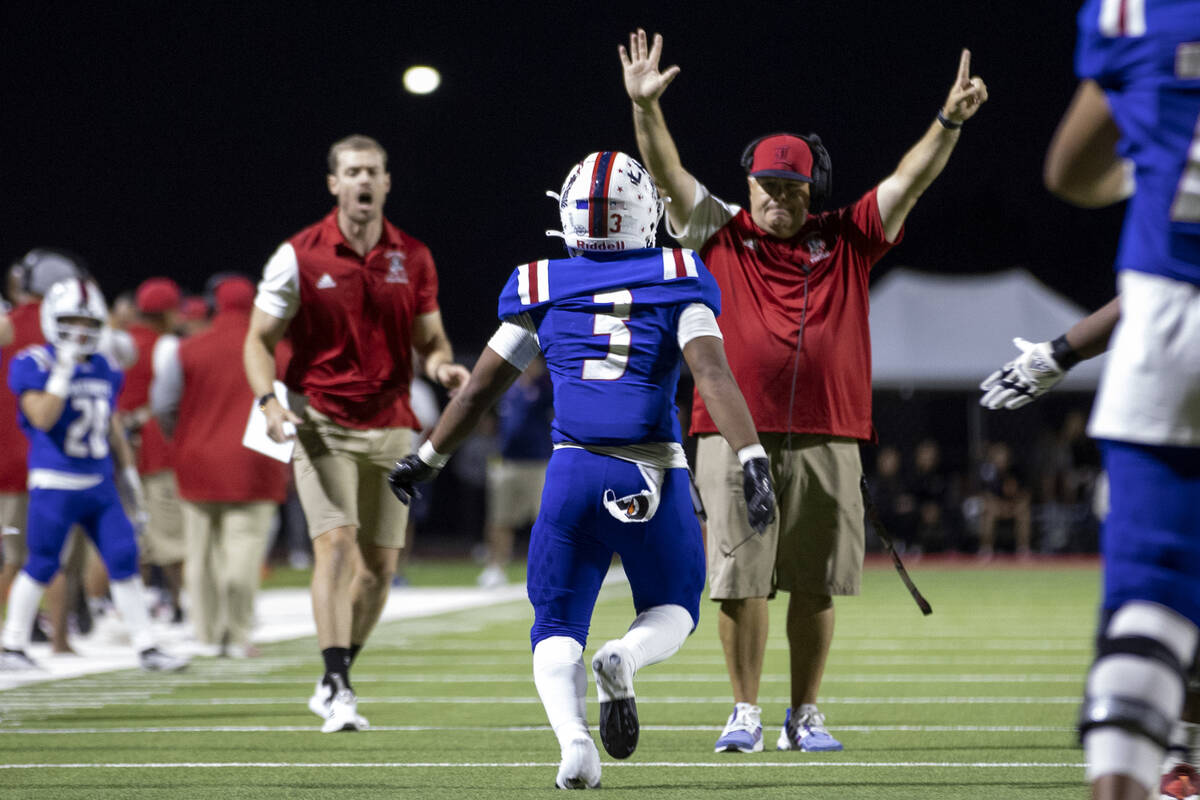 Liberty’s Isaiah Lauofo (3) runs to hug head coach Rich Muraco, right, after he caught a pass and ran nearly to the end zone so his team could secure a touchdown during a Class 5A high school football game against Desert Pines at Liberty High School on Friday, Oct. 21, 2022, in Henderson. (Ellen Schmidt/Las Vegas Review-Journal) @ellenschmidttt 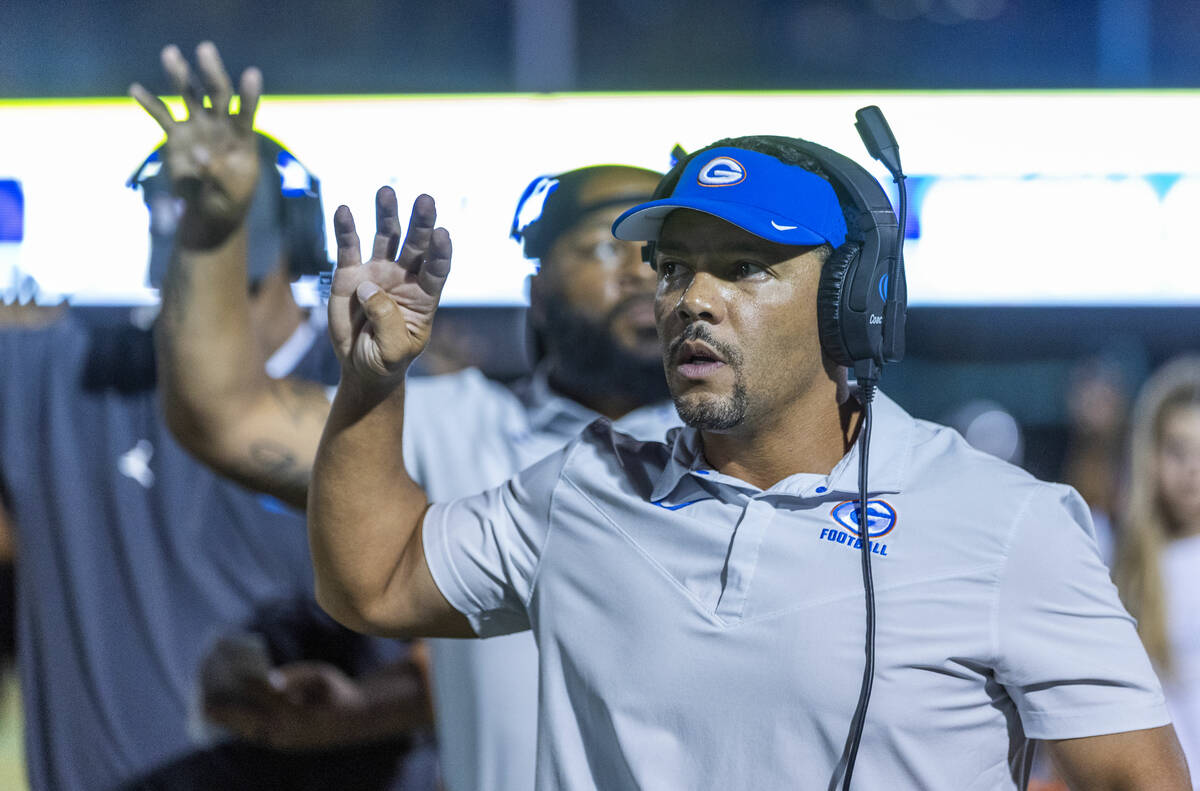 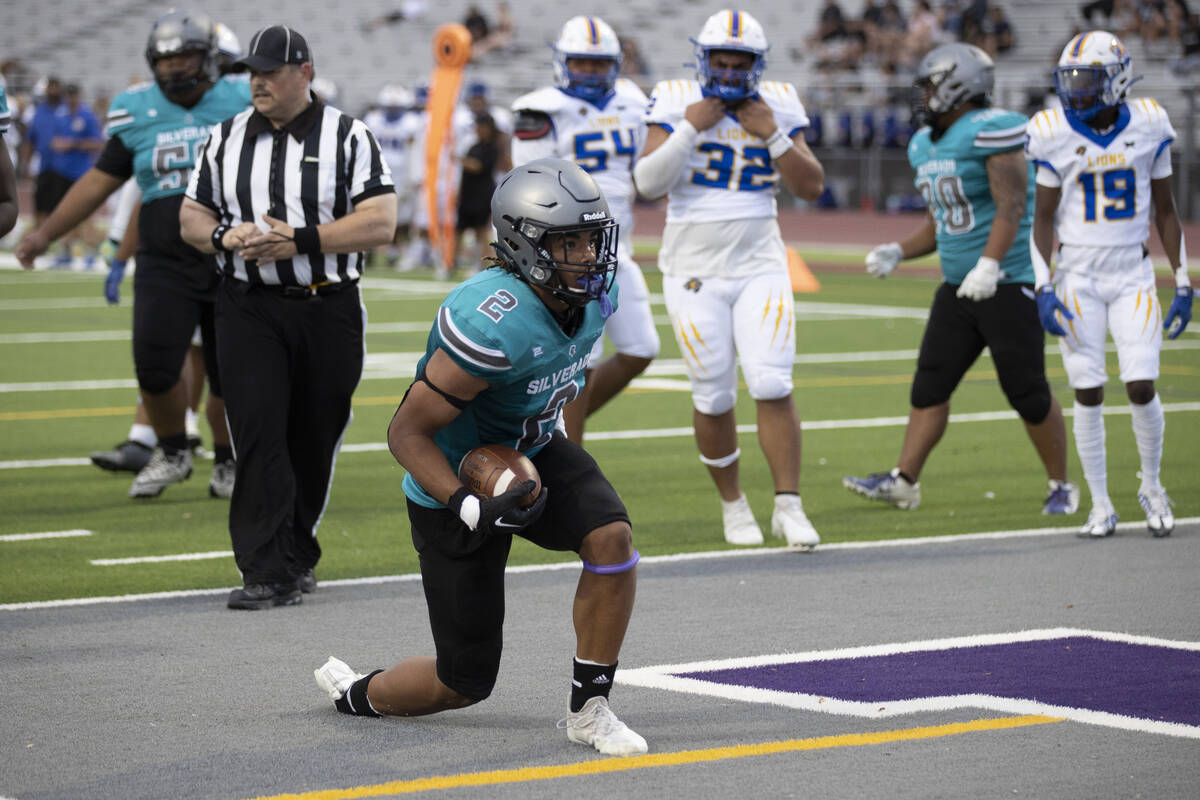 Silverado senior Donavyn Pellot (2) scores a touchdown during their game against Sierra Vista at Silverado High School on Friday, Sept. 9, 2022, in Las Vegas. Silverado led 34-7 at the half. (Steel Brooks/Las Vegas Review-Journal) 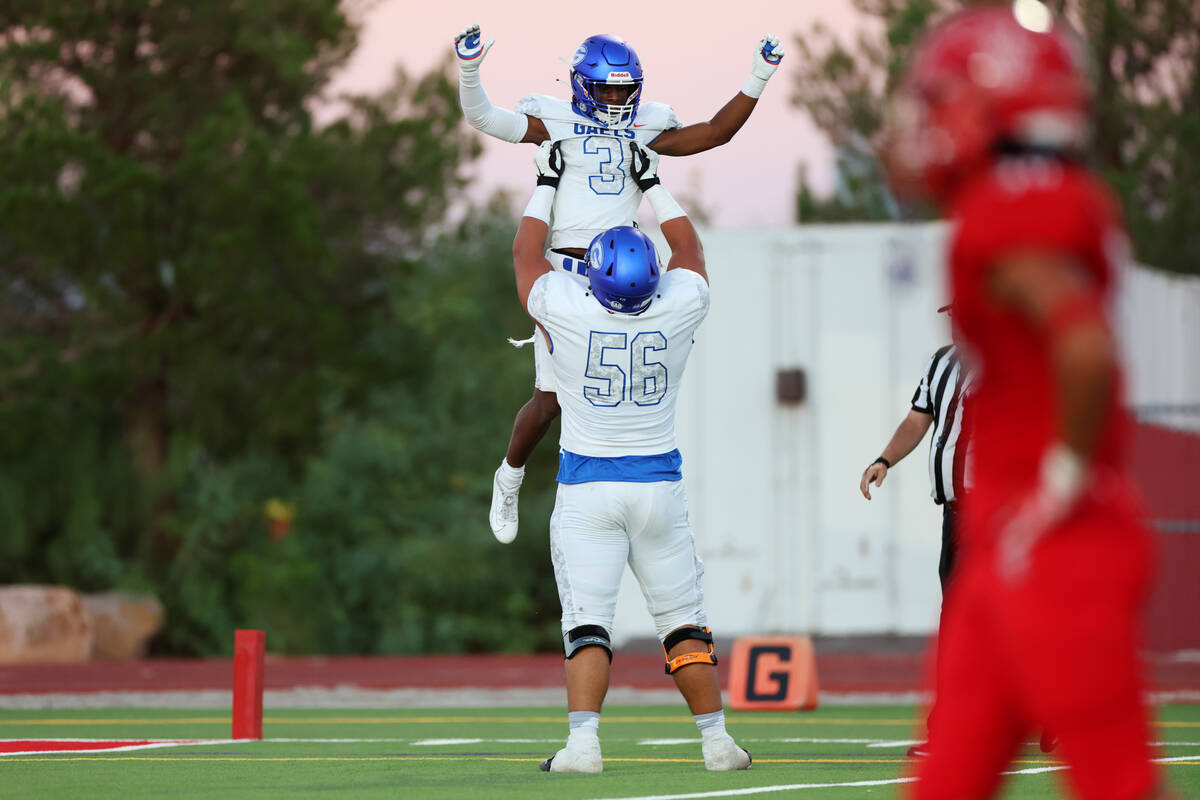 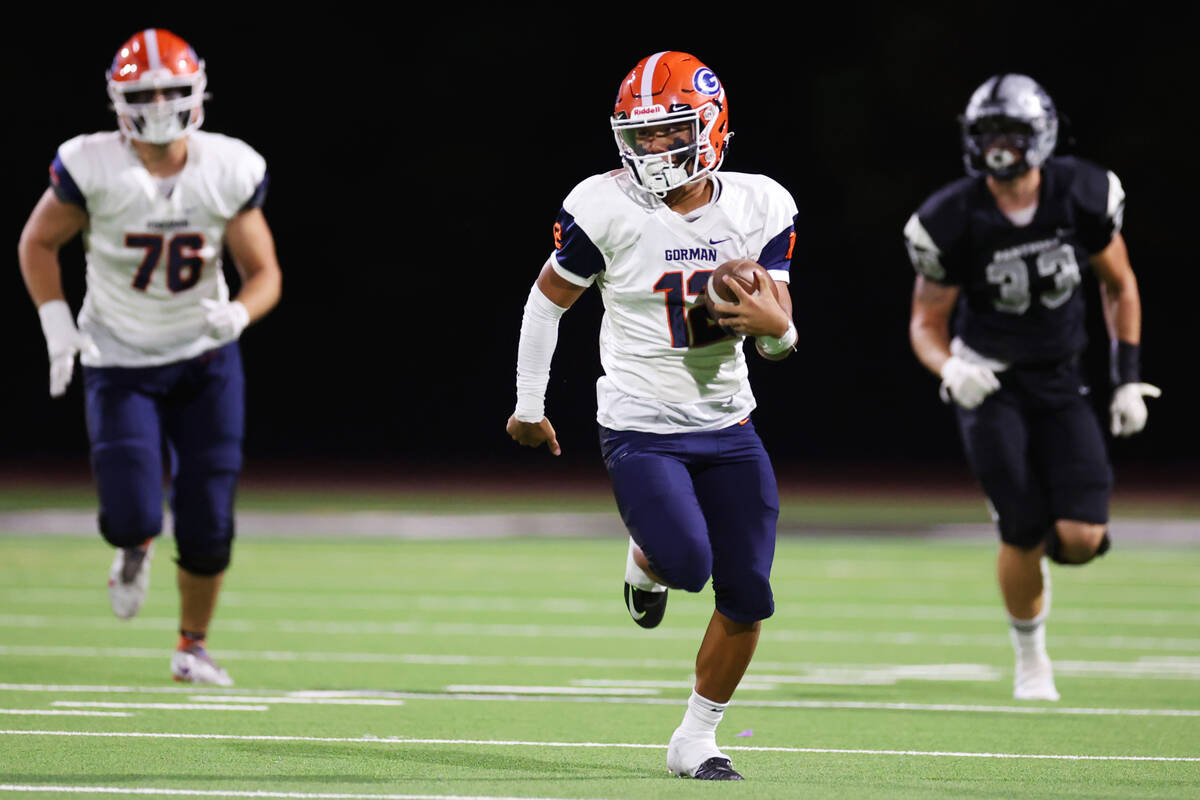 Bishop Gorman's Micah Alejado(12) runs the ball for a touchdown during the first half of a football game against Palo Verde at Palo Verde High School in Las Vegas, Friday, Oct. 14, 2022. (Erik Verduzco / Las Vegas Review-Journal) 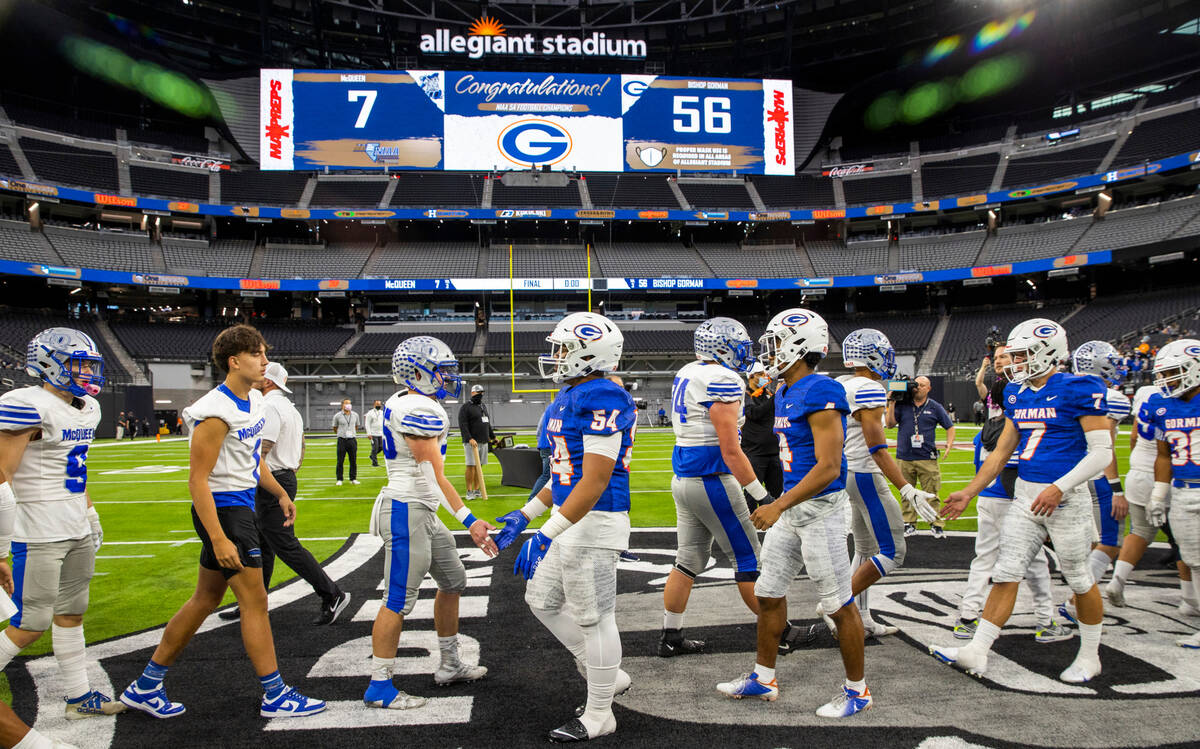 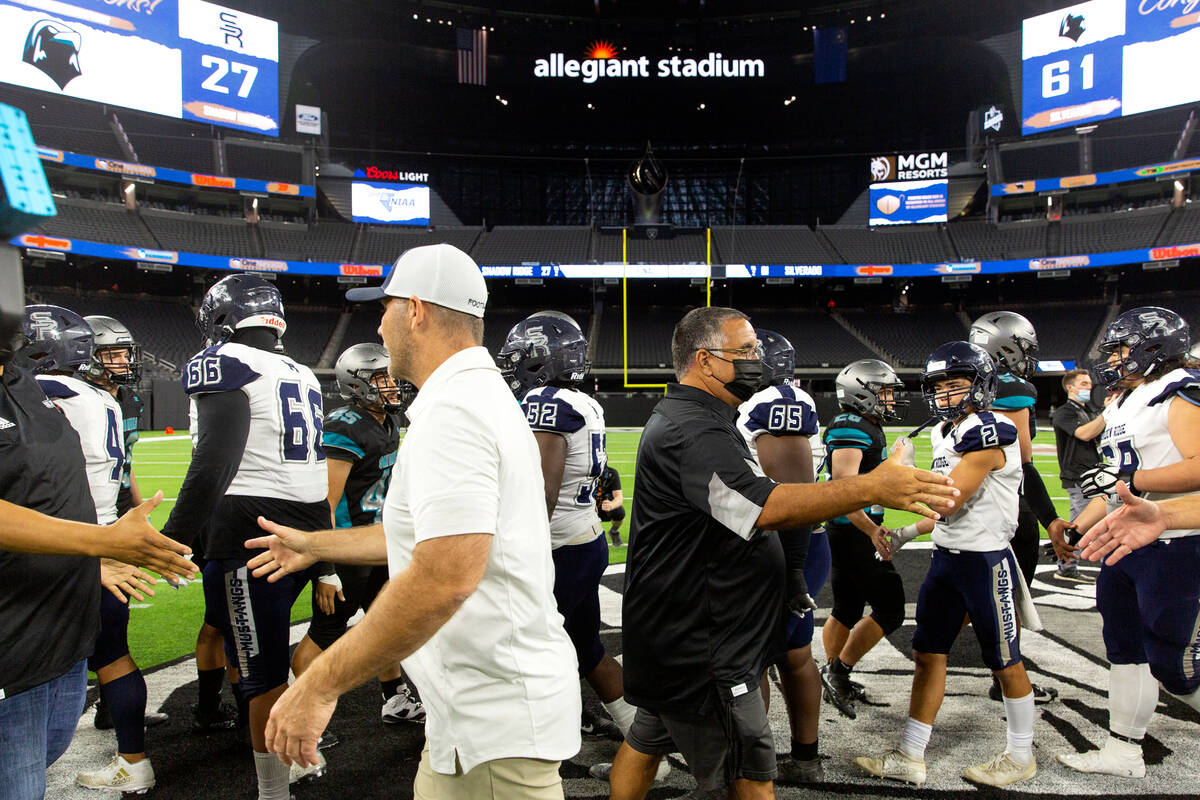 A running clock should be the logo for high school football in Southern Nevada.

All Bishop Gorman games? None of them.

That underscores that the local imbalance of power doesn’t just exist at 5959 S. Hualapai Way, though Gorman is the program other schools point to when discussing the unlevel playing field.

“We would prefer the competition level to be here rather than try to always go out,” Gorman coach Brent Browner said. “We love playing out-of-state games, don’t get me wrong. We love that process, but we also want good, healthy competition within the state.”

For certain, there is no shortage of eye-rolling around the valley at those comments, but look at it from Gorman’s standpoint. If the Gaels had much tougher local competition, their quest for a national championship wouldn’t have ended in August in a 24-21 loss to California’s Mater Dei, which is ranked first nationally by Maxpreps. Gorman is fifth.

Whether it’s Gorman or Silverado or another top team effectively ending games in the second quarter, the widespread agreement is the weekly blowouts are not good for local high school football.

That dominance often extends all the way through the state championship games. Gorman defeated McQueen 56-7 in last year’s Class 5A title game, and Silverado beat Shadow Ridge 61-27 in the 4A final.

In Liberty’s case, that meant working around the block class schedule so the players would be in weightlifting every day, as well as allowing Muraco to raise enough money for the Patriots to play a more national schedule.

The strategy worked when Liberty upset Gorman 30-24 in overtime in 2019 on its way to the Class 4A state championship. Gorman had won 10 state titles in a row.

“I think every public school in town was really happy when they did what they did back in 2019,” Palo Verde coach Joe Aznarez said. “I think that was an anomaly, but they do a hell of a job operating under the protocols of” the Clark Country School District and the Nevada Interscholastic Activities Association.

Coaches said one issue that especially divides the haves and have-nots is finding assistant coaches. It’s such a big problem that many schools don’t field freshman teams. Even if a school has all three levels of programs, the lack of coaches makes hands-on work with players more challenging.

Muraco said schools are allowed six assistant coaching positions, which each pay $1,800 stipends for the year.

“The turnover we have is just incredible in the coaching ranks,” Muraco said. “I think we have almost 10 new coaches this year. You can’t build a program when you’re either getting fired or quitting and replacing coaches every three or four years. If you look at the successful programs in town, the majority of them have had coaching staffs in place for several years.”

Browner said Gorman adheres to CCSD policy when it comes to how much it pays coaches, but unlike the public schools, the Gaels don’t face limitations on the number of coaches. Gorman has 12 coaches for the varsity team and five each for the junior varsity and freshman clubs, and Browner said other schools need to more closely mirror those numbers.

“Would they be more competitive?” Browner asked. “One hundred percent.”

Whether CCSD allows schools to increase staffs or pay larger stipends, of course, comes down to money. It might be a tough sell in these times of gas costing $5 per gallon.

But the NIAA knows it has a major issue in trying to create a more level playing field, and it has taken such steps as creating Class 5A, beginning in 2021, to allow more teams to compete for a state title without having to go through Gorman.

Silverado is one of those teams, and the Skyhawks are putting up Gorman-like scores in dominating 4A. Unlike Gorman, which can easily reload each year, Silverado is a senior-dominant team trying to repeat its state championship without the promise it will be just as good next season.

The Skyhawks likely will end up in 5A next season because of the state’s two-year rubric points system that evaluates which level each program should compete in. So Silverado might be rebuilding next season and won’t have anywhere near the type of team it has now while playing in the state’s largest classification.

“Our enrollment has shrunk at Silverado (to about 2,100), and it would be difficult at the 5A level,” coach Andy Ostolaza said. “That’s why I told people I thought they got it right when they realigned. … We’ve been doing pretty good the last year and a half, but we also have 89 kids in our program versus teams up the street that are carrying 130, 140 kids in their programs.”

Gorman is the death and taxes of local high school football, where one future college All-American is replaced by another as the Gaels go on dominating.

They loom so large that the Northern Nevada Class 5A programs voted unanimously to request to move into 4A because they don’t have the enrollment sizes to compete.

“Does that mean that’s going to happen? No,” NIAA executive director Donnie Nelson said. “The realignment committee will have the authority to evaluate that request.”

The realignment committee will begin the entire realignment process Nov. 29, appeals will be heard Dec. 7, and the board of control makes the final decisions Jan. 18 and 19.

“The one thing I really like is our membership has a say,” Nelson said. “This isn’t a dictatorship.”

If realignment is strictly by the rubric system, there will be a lot of upheaval in classes 4A and 5A. Four of the top 10 teams in the South are in 4A.

Muraco wouldn’t mind trying the European soccer annual promotion-and-relegation model that creates late-season drama as some teams try to remain in the highest classification while others work to get there. Nelson, however, said the membership didn’t want that system.

The NIAA can get each classification exactly right, but there will be teams not just named Gorman that rise and dominate. It’s the nature of sports, and no set of rules is going to eliminate that possibility.

And no matter what the NIAA does, Gorman is going to keep winning at an elite level. Browner might genuinely want more competition, but he’s not going to lower the standards of his program to achieve that goal.

“Our state’s not big, but we have a powerhouse football team that’s ranked nationally every year, and there’s really no way to combat that because there’s no private league,” Muraco said. “There are no other teams on their level. You can’t kick them out of the state.”