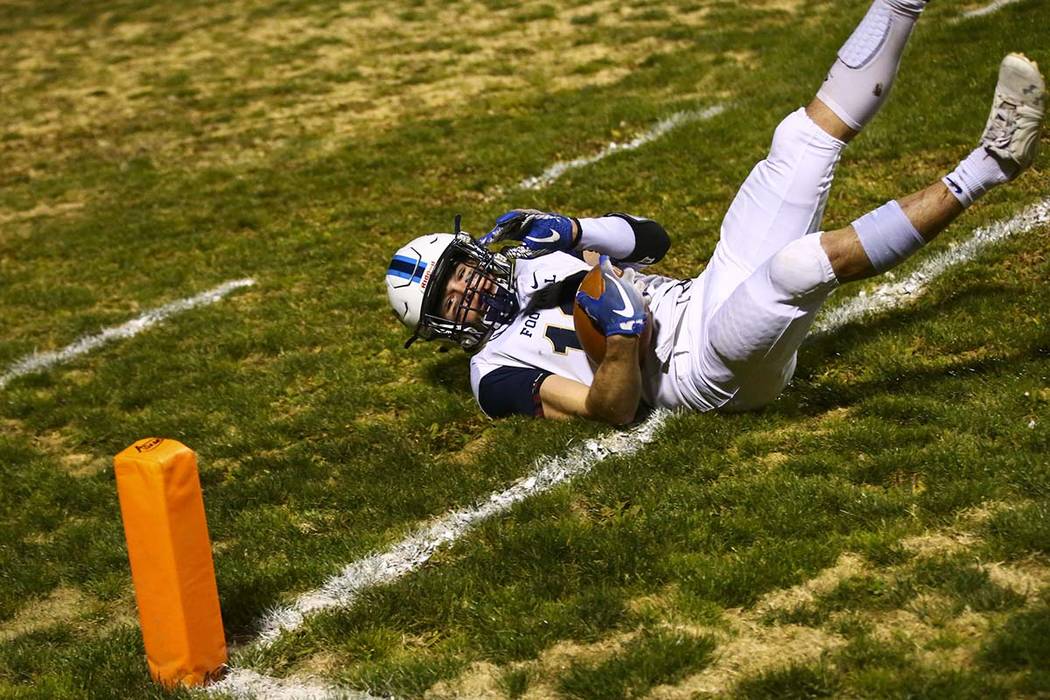 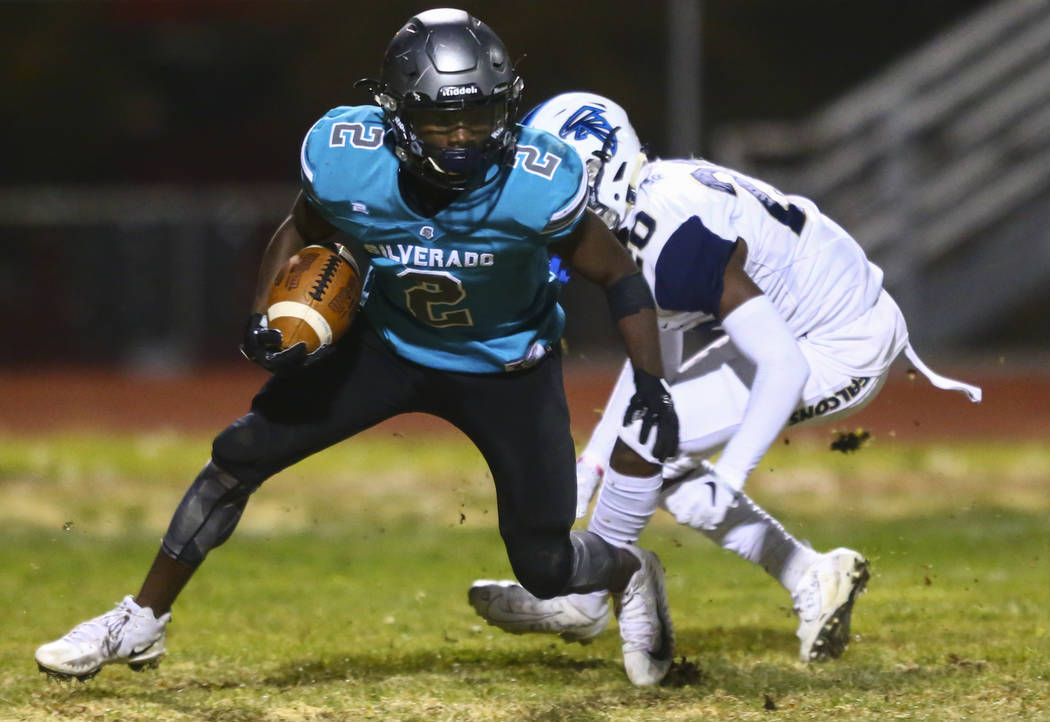 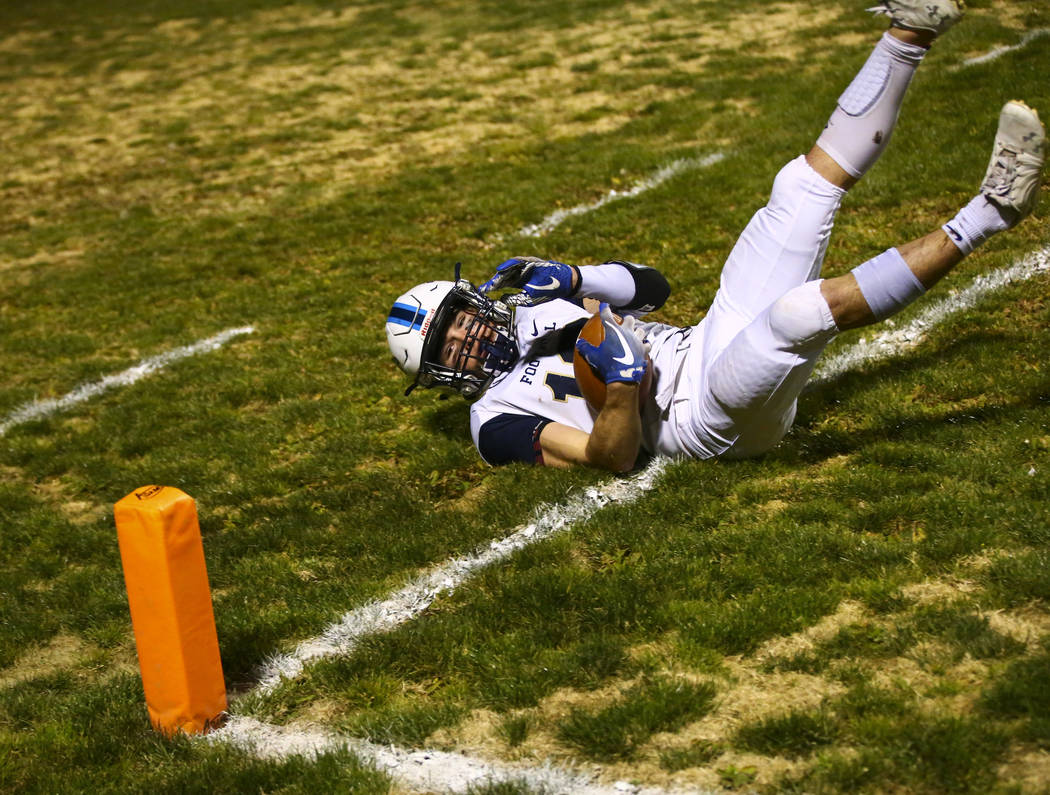 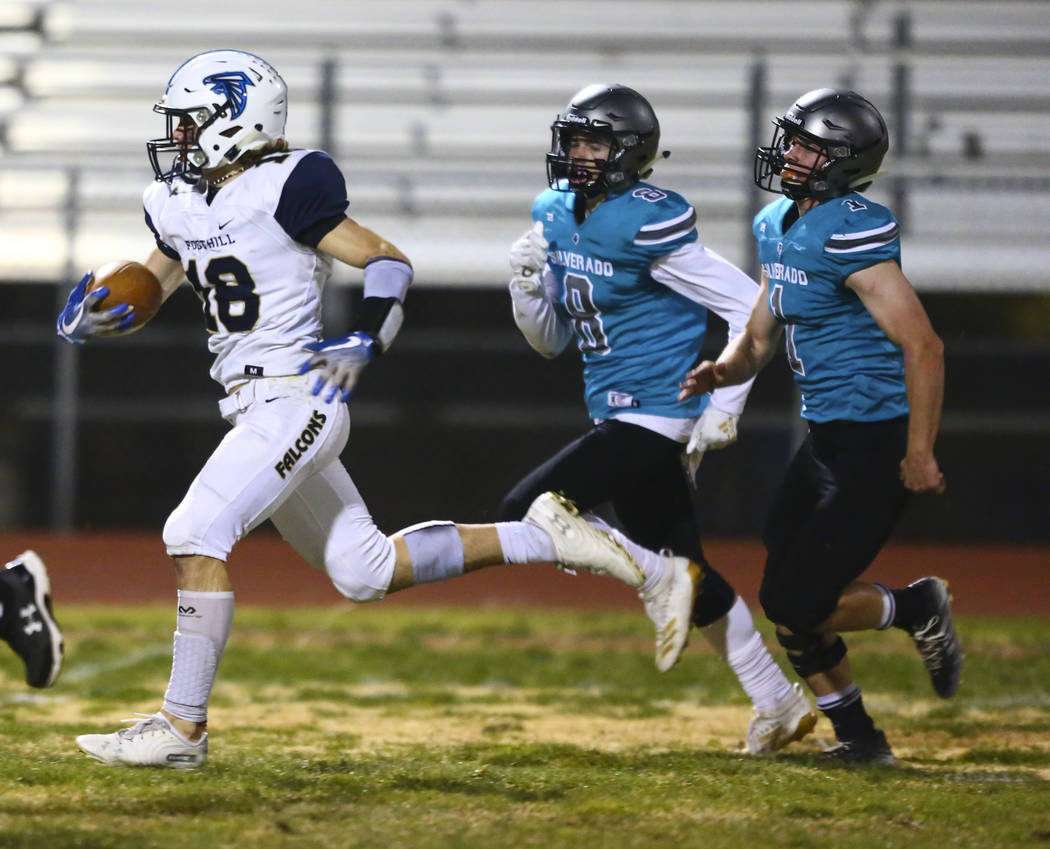 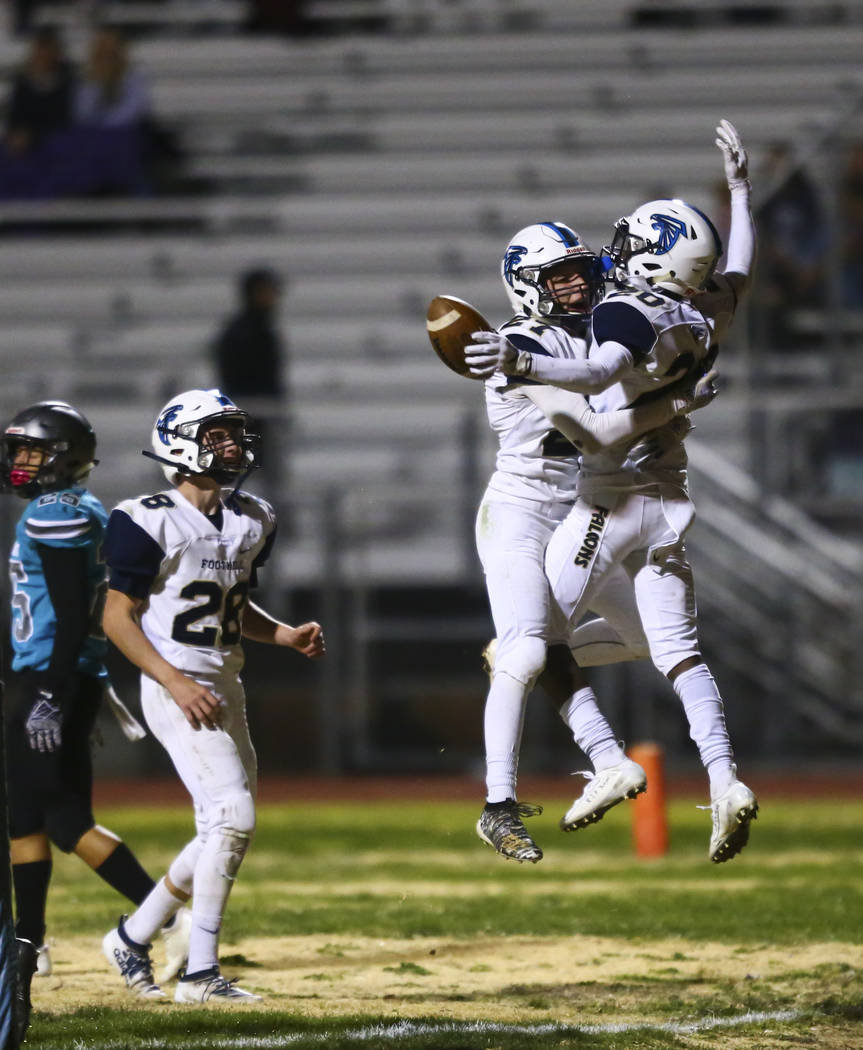 Foothill's Nathan Hargis (27) and Omari Canton (20) celebrate after breaking up a pass by Silverado during the second half of a 4A Desert Region football playoff game at Silverado High School in Las Vegas on Friday, Nov. 8, 2019. Foothill won 20-7. (Chase Stevens/Las Vegas Review-Journal) @csstevensphoto 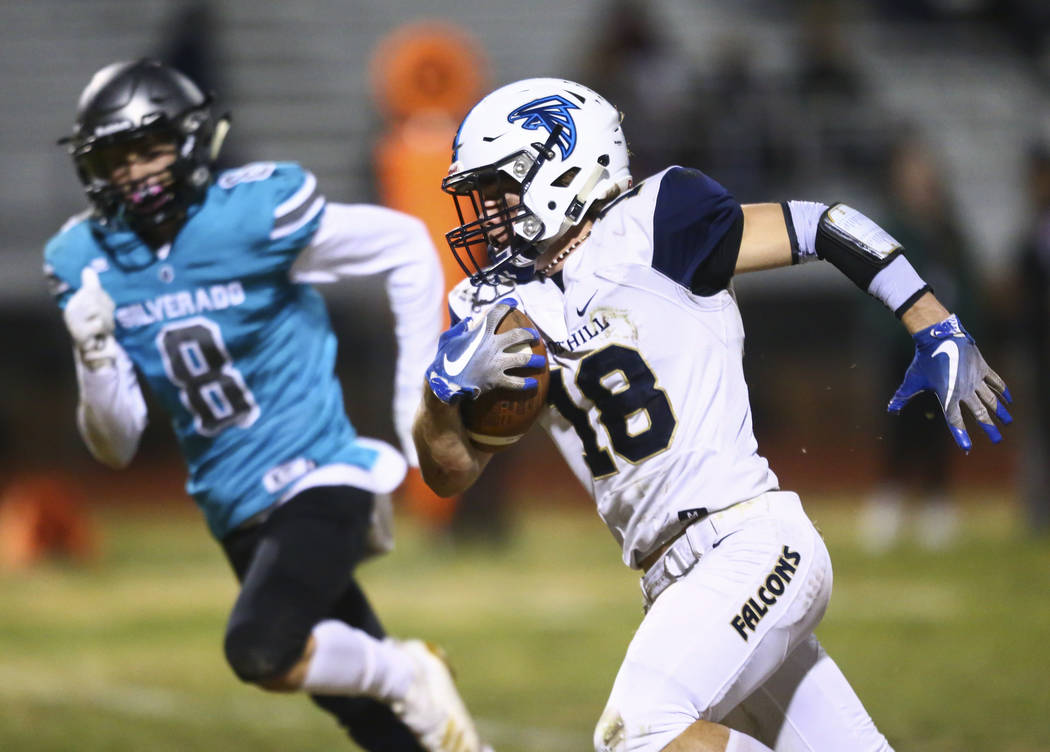 Foothill's Thomas Fisher-Welch (18) runs the ball against Silverado's Ryan Kelly (8) to score a touchdown during the second half of a 4A Desert Region football playoff game at Silverado High School in Las Vegas on Friday, Nov. 8, 2019. Foothill won 20-7. (Chase Stevens/Las Vegas Review-Journal) @csstevensphoto 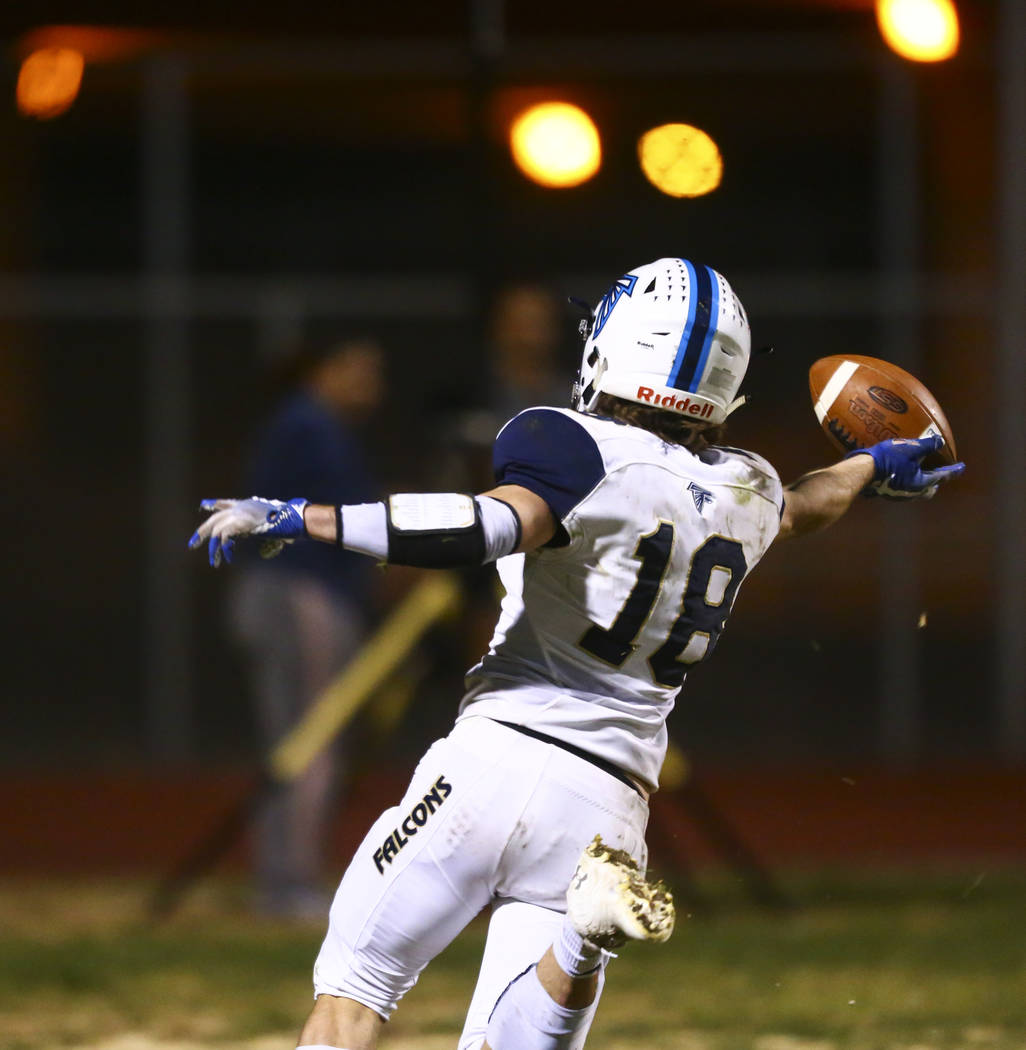 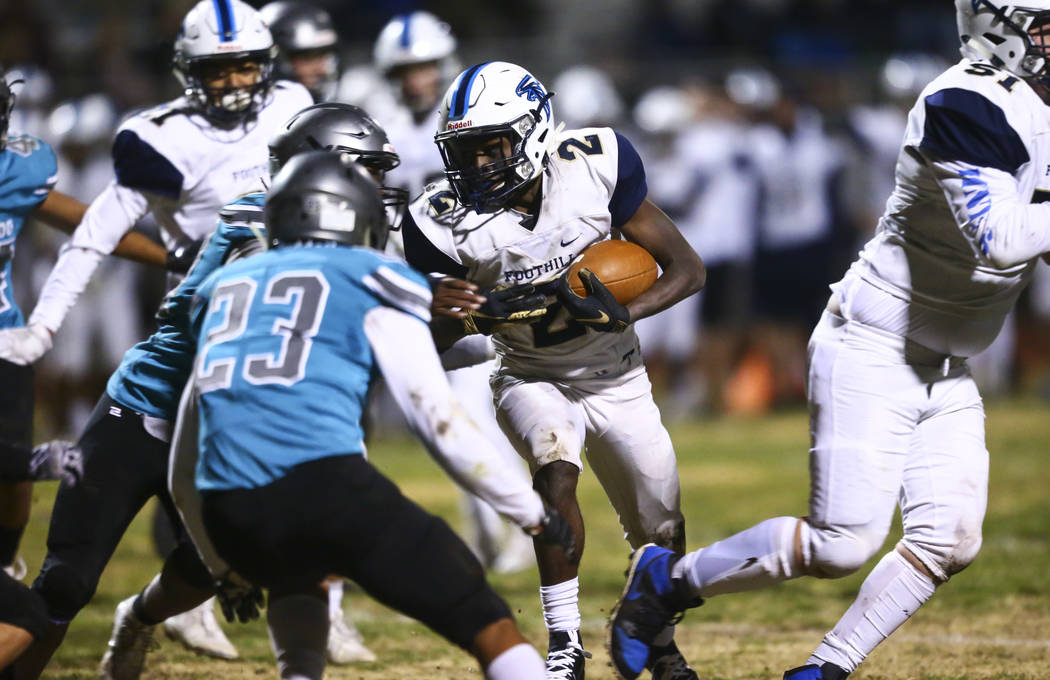 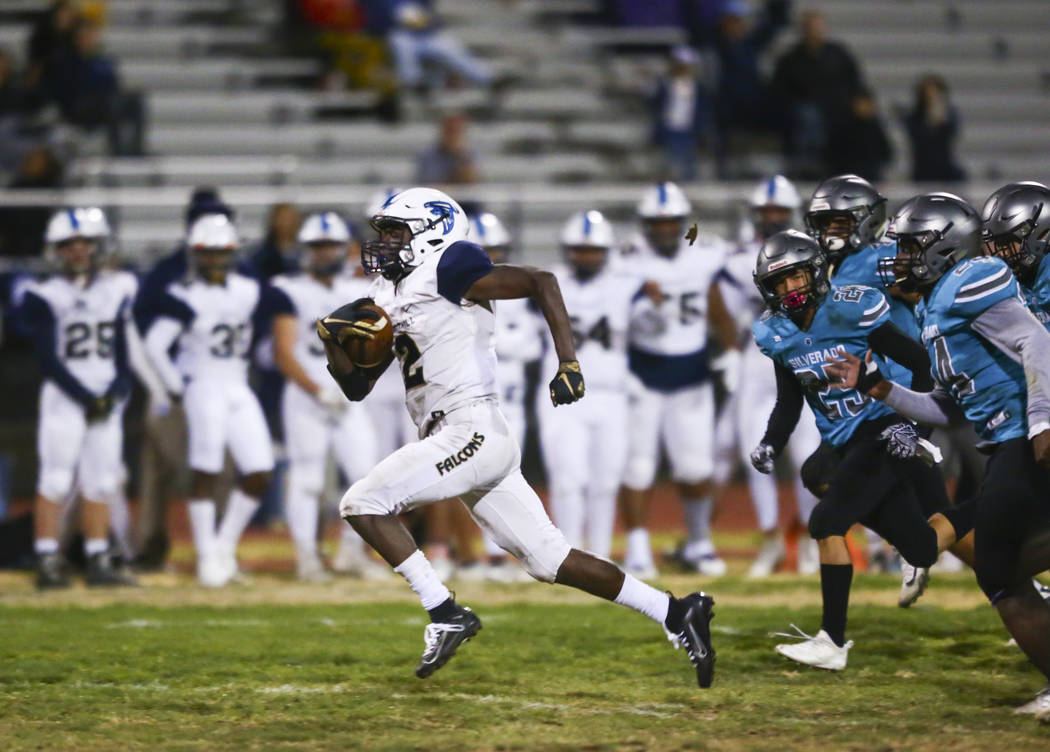 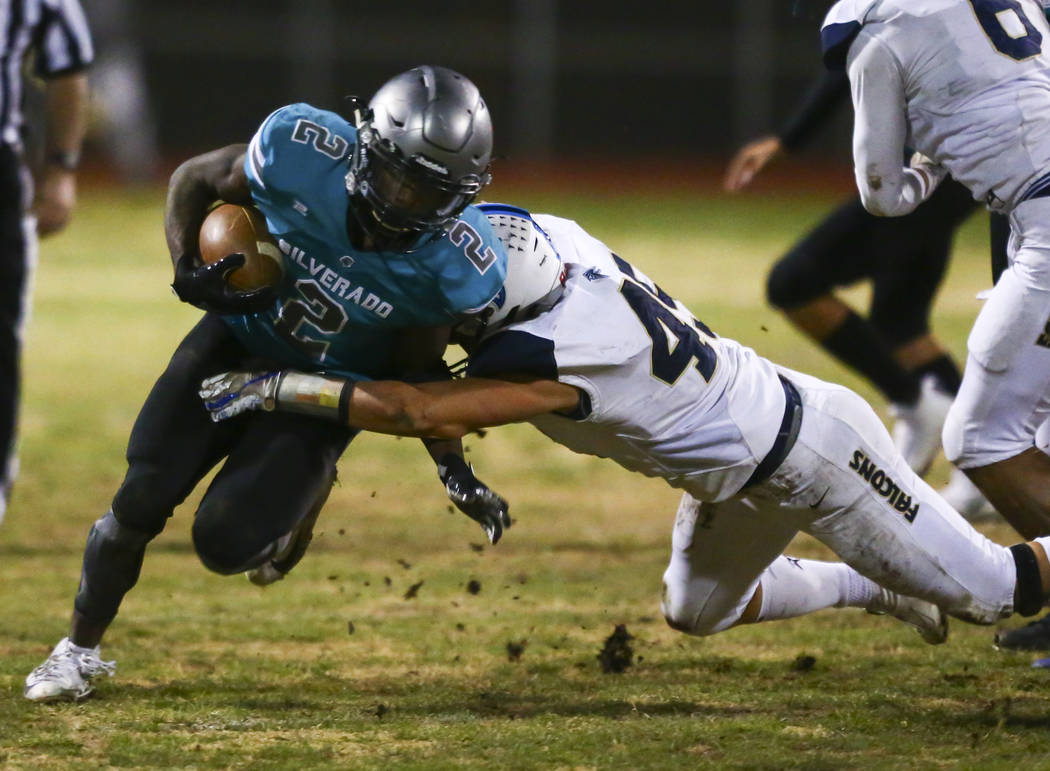 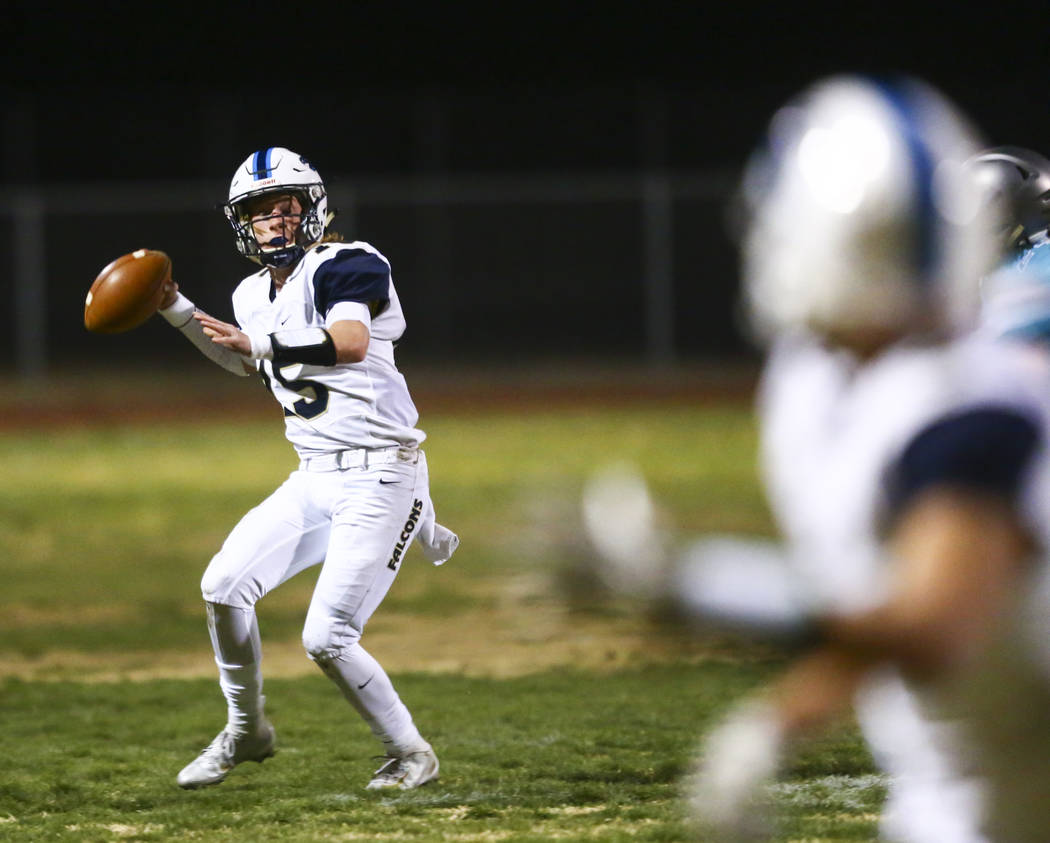 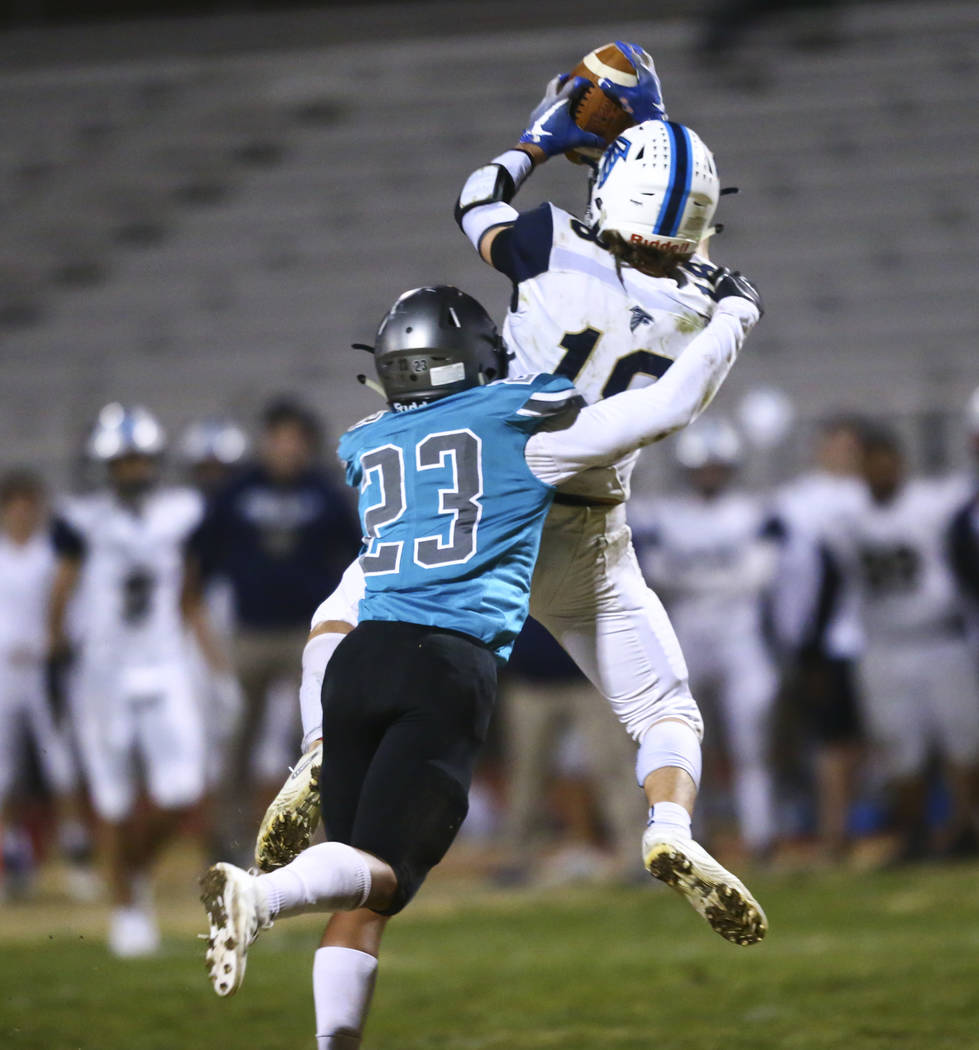 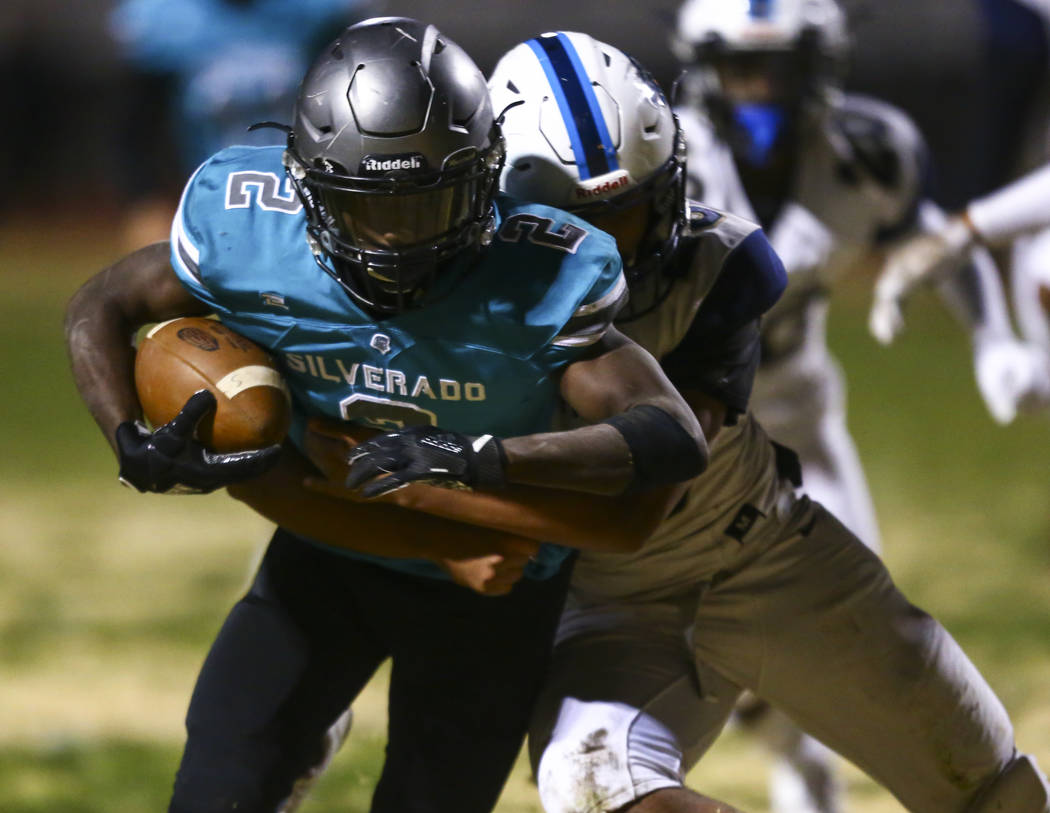 Foothill's Vyron Rosquist Wallace (23) tries to stop Silverado's Aginae Cunningham (2) on his way to score a touchdown during the first half of a 4A Desert Region football playoff game at Silverado High School in Las Vegas on Friday, Nov. 8, 2019. (Chase Stevens/Las Vegas Review-Journal) @csstevensphoto 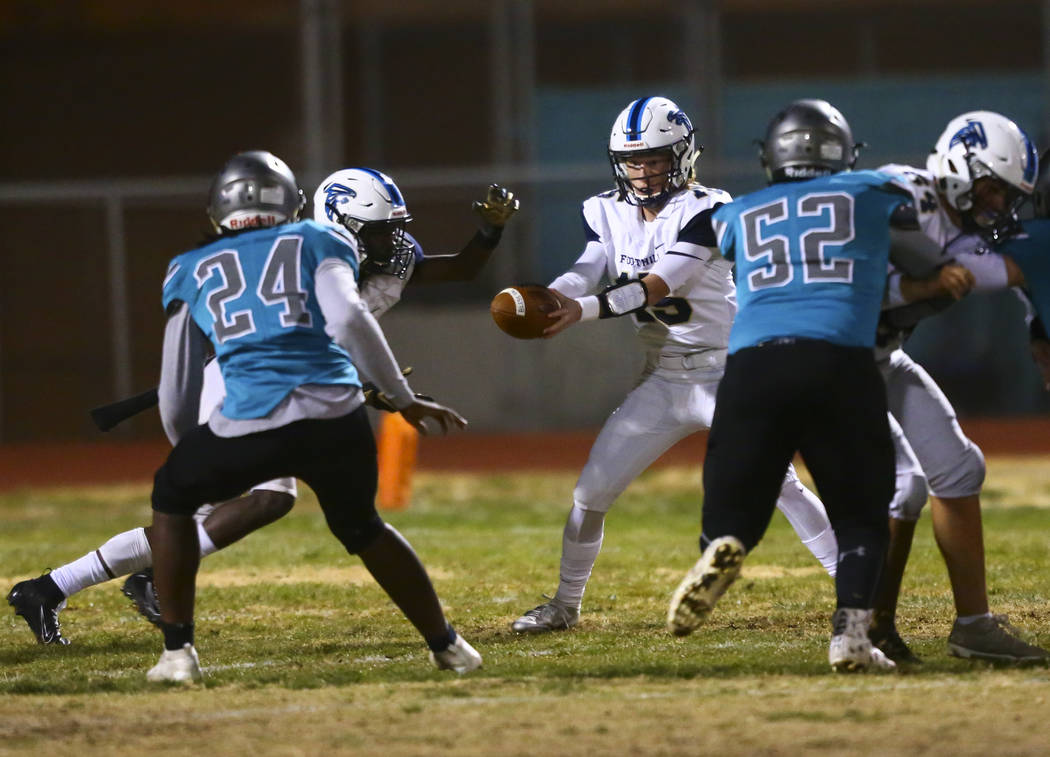 Foothill quarterback Koy Riggin (15) hands the ball off to Foothill's Kendric Thomas (2) during the first half of a 4A Desert Region football playoff game at Silverado High School in Las Vegas on Friday, Nov. 8, 2019. (Chase Stevens/Las Vegas Review-Journal) @csstevensphoto 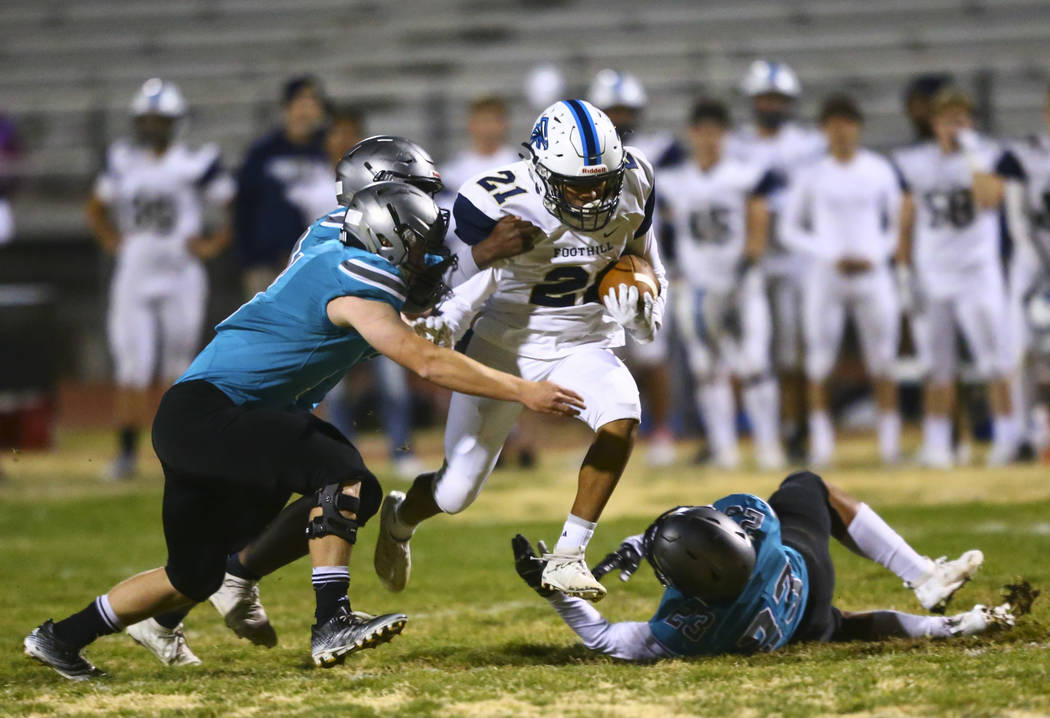 After stumbling to a three-game losing streak to end the regular season, Foothill appeared to be destined for a short stay in the playoffs.

But the Falcons found the tonic for what ailed them Friday at Silverado in the form of a dominating defensive performance and the dynamic duo of quarterback Koy Riggin and wideout Thomas Fisher-Welch.

Riggin connected with Fisher-Welch for three touchdown passes, and Foothill’s defense throttled the Skyhawks’ rushing attack to seize a 20-7 victory in their Class 4A Desert Region quarterfinal.

Foothill (7-4) advances to face Liberty in the Desert Region semifinals.

Riggin, who finished 18-for-29 for 294 yards passing, said it was gratifying to bounce back from the team’s less-than-stellar end of the regular season by winning a road playoff game.

“It feels great just because we didn’t perform the way we wanted to and we dropped some games we know we shouldn’t have,” Riggin said. “That put a dent in our season goals. We had to come out here and prove ourselves again and get back on track.”

Foothill dominated Silverado (7-3) from the start on defense, limiting the Skyhawks to 66 yards of offense in the first half and 125 for the game. That included holding Aginae Cunningham, the valley’s top rusher this season who had been averaging over 9 yards per carry, to 57 yards on 22 carries.

Meanwhile, on offense, Riggin hit Fisher-Welch with a 15-yard TD pass to open the scoring with 11:07 left in the second quarter.

Despite dominating in yards, however, Foothill was still clinging to its 7-0 lead near the end of the first half.

Then, with the Falcons backed up on their own 13 and facing third-and-8, Riggin tossed a 5-yard pass to Fisher-Welch on the right sideline. Fisher-Welch evaded three tacklers and raced 84 yards before he was finally chased down at the Silverado 3.

“Based on the read I wasn’t going to throw him the ball,” Riggin said. “I always have faith that he is going to make a play, but I don’t know that I thought he was going to go that far.”

“I made the first move on the safety and beat him, then a got a block by my receiver, then missed another tackle on the side and just took off,” said Fisher-Welch, who finished the game with five receptions for 165 yards. “Then my legs got tired and they finally got me.”

Three plays later, Fisher-Welch cashed in on his big play, hauling in a 1-yard TD pass from Riggin to make it 14-0 with 52 seconds left in the half.

Silverado stayed in it, thanks to a 76-yard return by Brandon Powers on the ensuing kickoff that set up the Skyhawks at the Foothill 11.

Cunningham scored two plays later for Silverado on an 8-yard run to trim the Falcons’ lead to 14-7.

But Foothill sealed it when Riggin and Fisher-Welch connected for the third time on a 41-yard TD pass with eight minutes left in the game.

“It’s been all season. There has been nothing more than trust between us,” Fisher-Welch said. “Even off the field and in other sports, we have always had that connection. Tonight, we came out on this field and sparked it up again.”

Now the Falcons face a rematch with Southeast top seed Liberty, which spanked Foothill 38-0 in October.

“It’s obviously a really tough challenge,” Riggin said. “We know what it takes to win, and we know it takes a lot. But we are grateful to get the opportunity to play them again. We didn’t play as well as we thought we could the first time we played them, so it’s good to get another chance.”