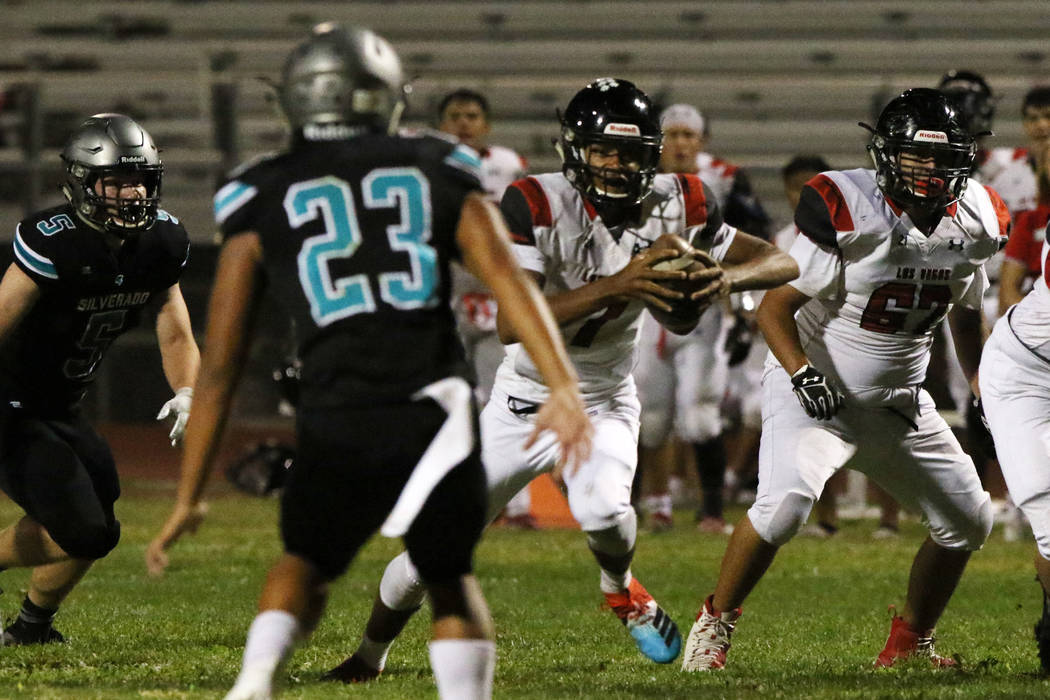 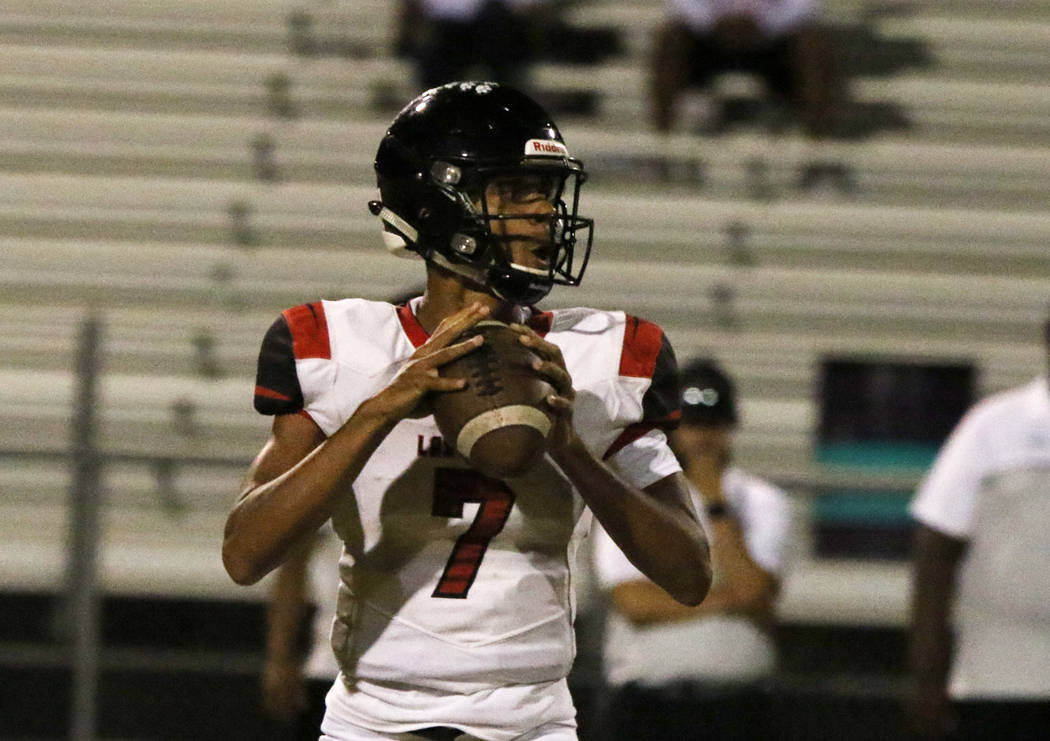 Las Vegas High's quarterback Ja'shawn Scroggins sets up to pass the ball during the first half of their football game at against Silverao High at Silverado High School on Friday, Sept. 6, 2019, in Las Vegas. (Bizuayehu Tesfaye/Las Vegas Review-Journal) @bizutesfaye

The midway point of the high school football season will be crossed this weekend.

So much already has happened, such as surprising teams, fantastic finishes and the opening of Class 4A Southwest League play last week that was quite an appetizer for the rest of the league openers.

There will be plenty of time to sort the playoff picture as it comes into focus. For now, let’s take a look at what has stood out in the first half.

Las Vegas (4-0) was eager to atone for back-to-back three-win seasons, and the Wildcats have done so in large part because of their explosive offense. Junior Ja’Shawn Scroggins has matured as a leader in his second year as starting quarterback, and coach Erick Capetillo said that’s a teamwide theme.

“The biggest difference between this season and last is our leadership on and off the field,” Capetillo said. “Guys are holding each other accountable and really taking pride in the team and the program. It’s not that they weren’t doing that last year, but they’re doing it so much more now.”

It looked like another season of struggle for Clark when it opened with a 21-7 loss to Virgin Valley. But the Chargers, who were 1-9 last season, haven’t lost since. They have won four straight, including a 21-14 victory over Spring Valley in their Southwest League opener last week.

Cimarron-Memorial was 3-7 last season and has needed four games to match that win total. Jordan Norwood has picked up where he left off last season as an all-state running back with 619 yards and six touchdowns, and Branden Smith has balanced the offense with 792 yards passing and nine TDs.

Worth the price of admission

Legacy has kept fans on the edge of their seats.

The Longhorns dominated Burroughs (California) in the opener, but their last three games have been decided by four, six (in overtime) and two points. Legacy is 1-2 in those games, but simply being in close games has its benefits.

“Green Valley (20-18 win) was a great game for us,” Legacy coach John Isola said. “We were up, then we were down. With four minutes left, we scored to go ahead again and then stopped them. We learned from that, that we can come back if we lose the lead. That’s something we’ve struggled with in the past couple of seasons.”

Team of the first half

With apologies to national powerhouse Bishop Gorman, nobody has dominated like Desert Pines.

The defense was expected to be nasty. The offense was seen as a question mark, but Rjay Tagatases has answered that with 878 yards passing and nine touchdowns. He’s surrounded by a deep and talented group of receivers with breakaway ability.

The Jaguars should be tested Friday when they play at Foothill (4-0). Quarterback Koy Riggin, an all-state selection last season, and linebacker Tofa Wilson, who has a valley-high seven sacks, lead the Falcons.

Player of the first half

Bishop Gorman wide receiver Rome Odunze is the No. 1 target for quarterback Micah Bowens. The Gaels know it. The defense knows it. Everybody in the stands knows it.

Odunze still leads the valley in receptions (30) and yards (640) and is tied for first in touchdowns (seven). The Washington commit has at least 100 yards in all four games, highlighted by a 10-catch, 217-yard and three-TD game against Servite. He added a 93-yard TD catch before hauling in the game winner from 20 yards with four minutes to go against Lone Peak (Utah) last week.