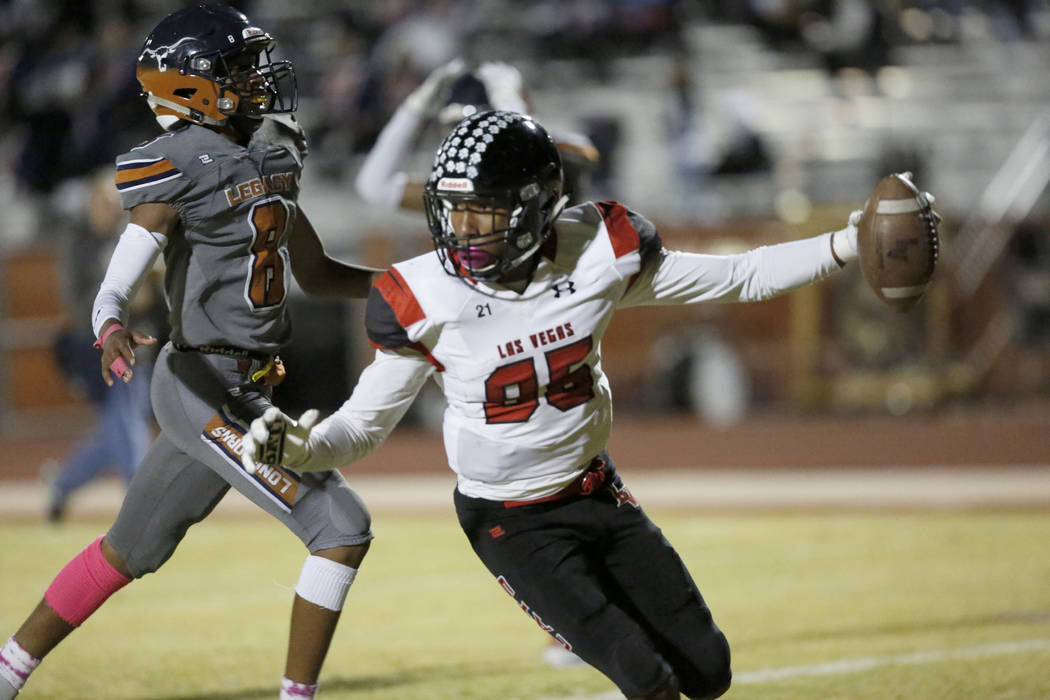 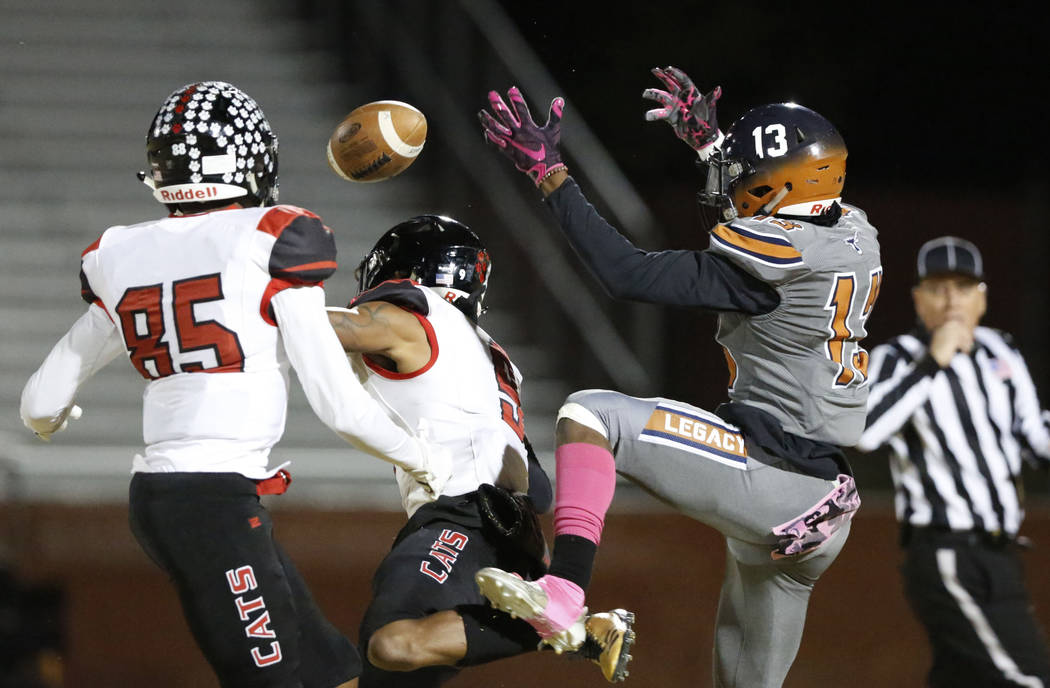 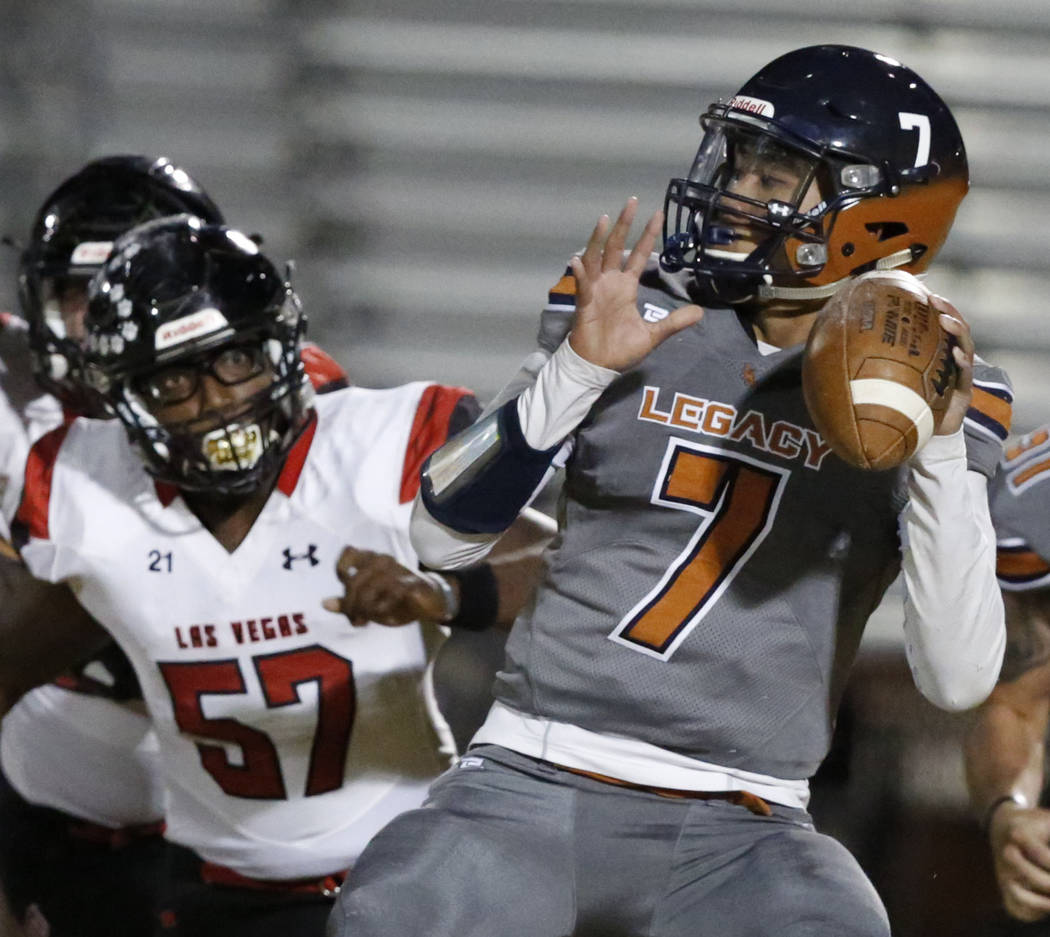 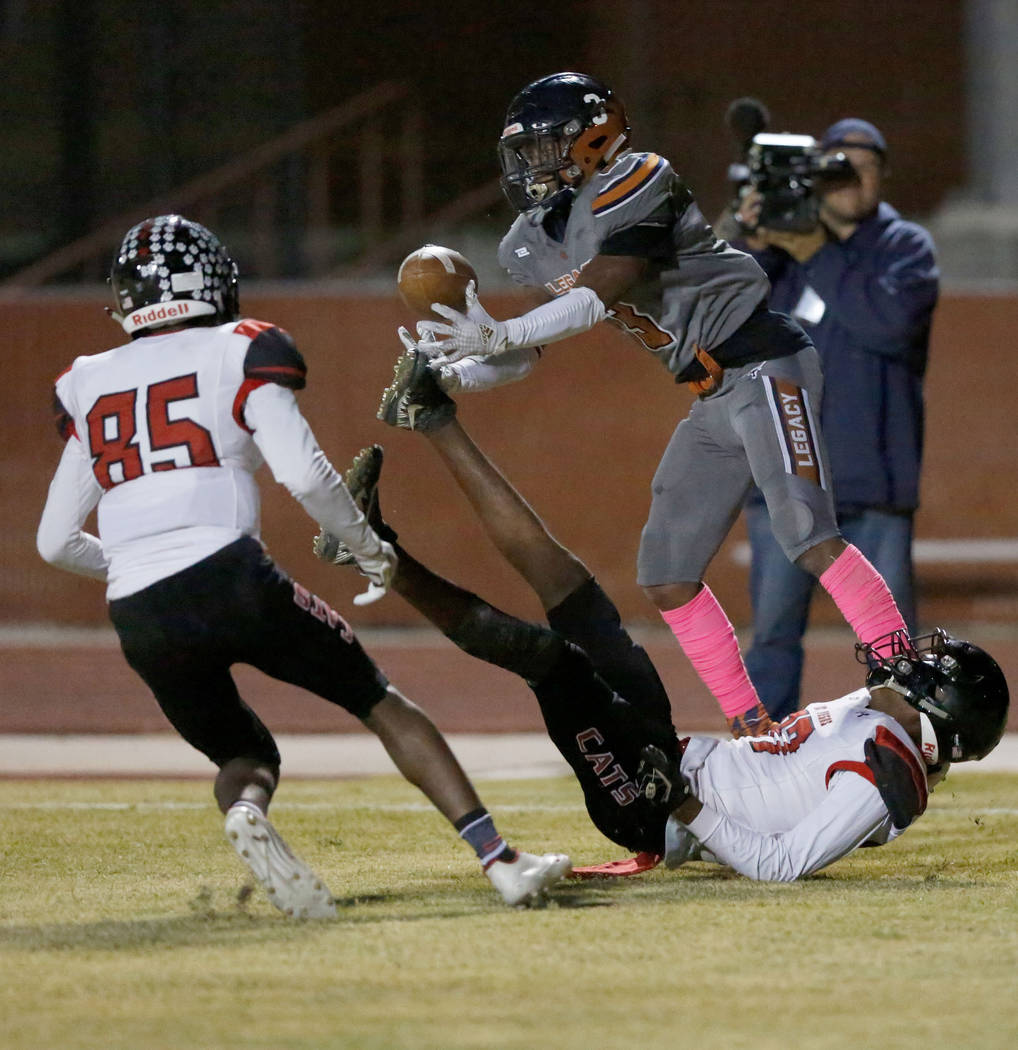 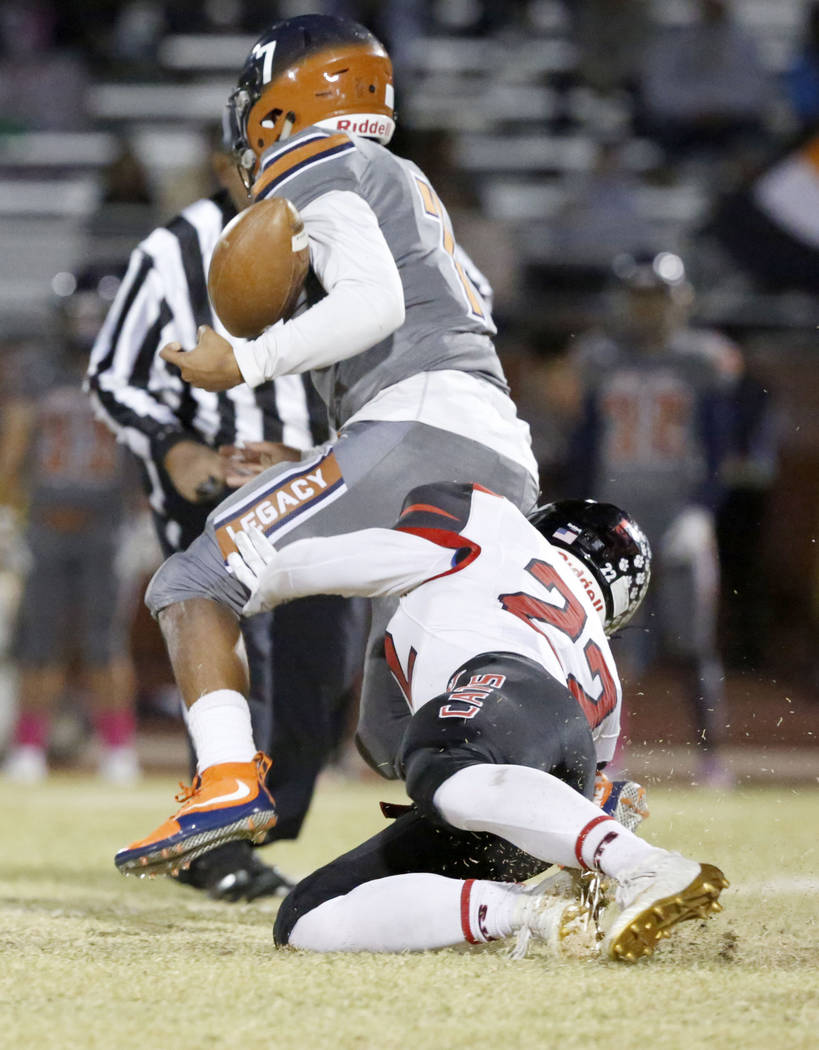 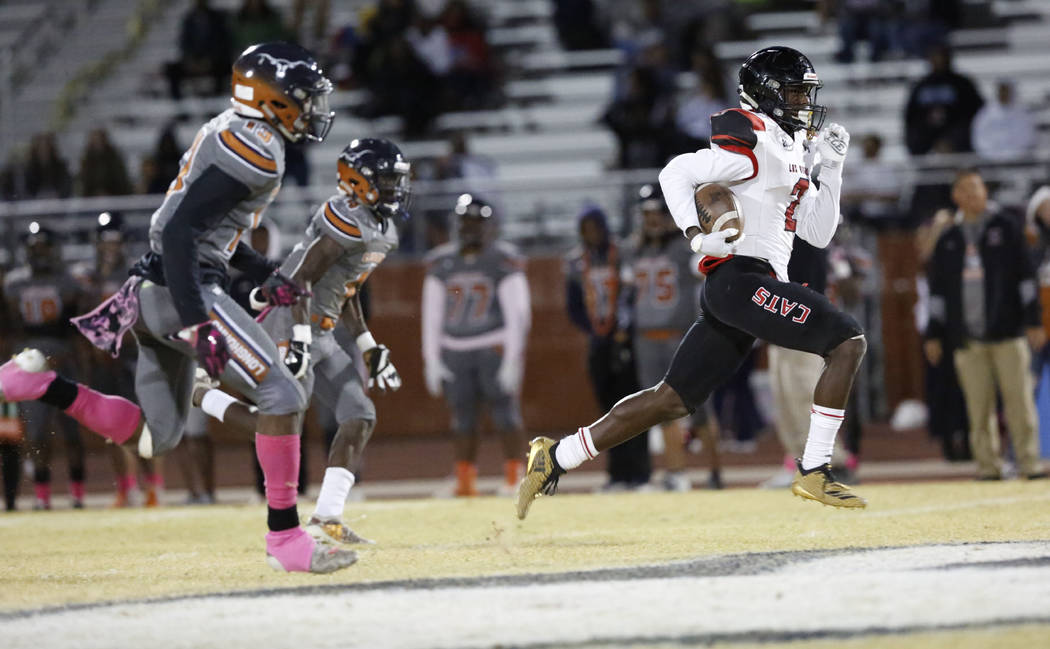 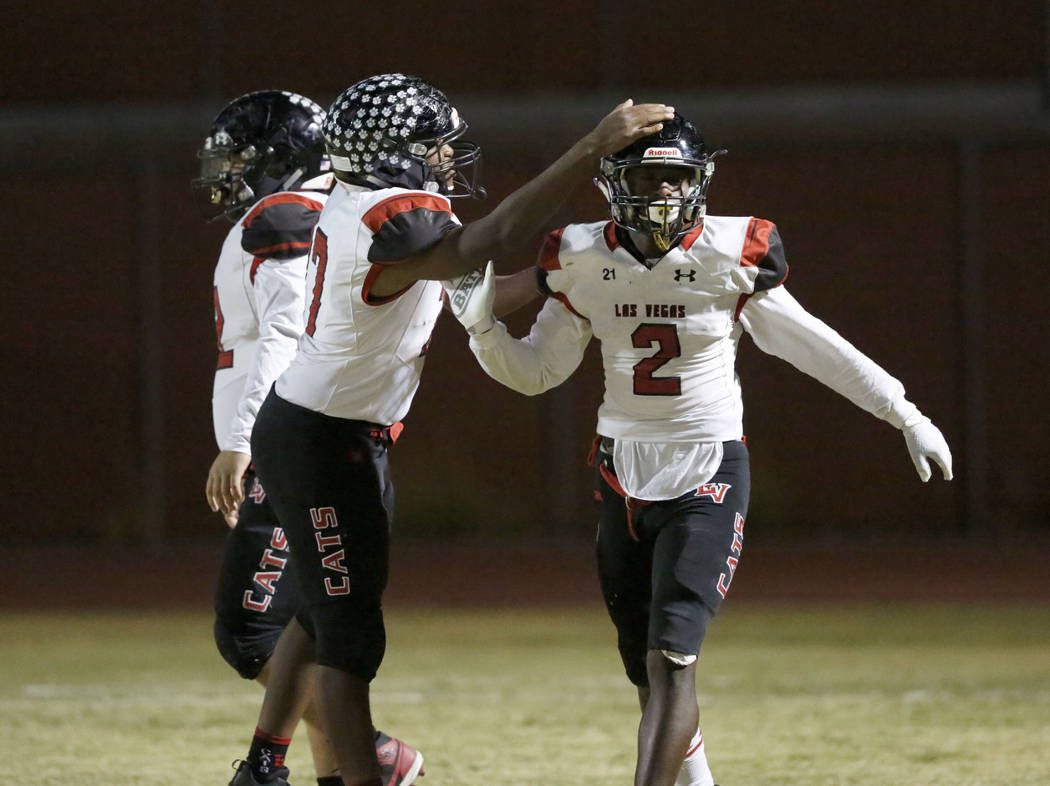 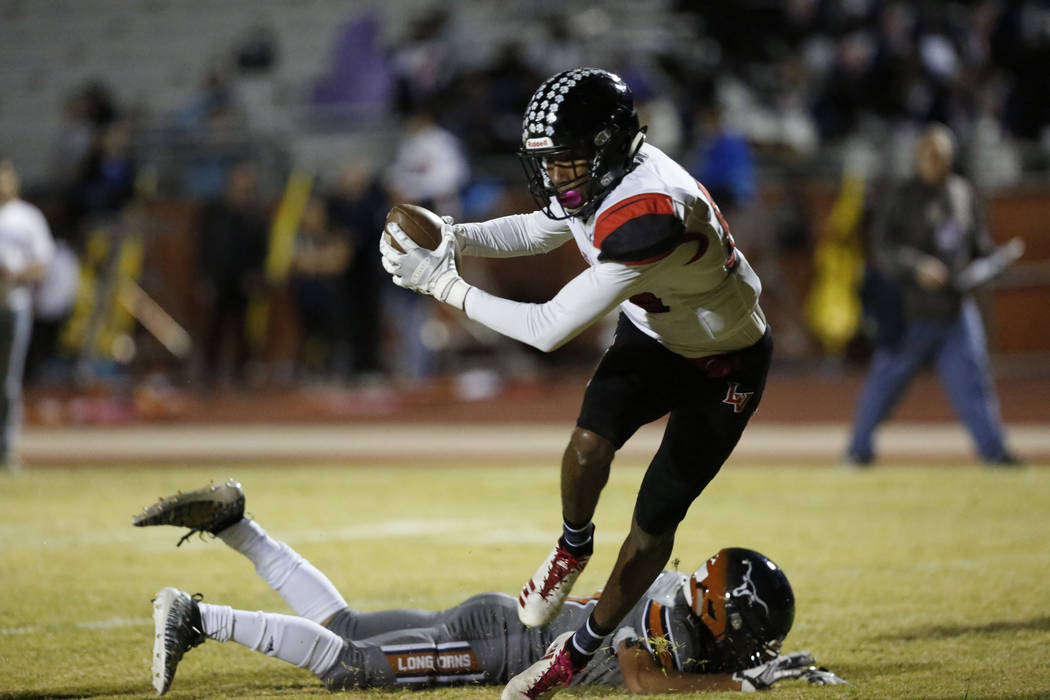 In a shootout for the ages, the Las Vegas Wildcats outscored the Legacy Longhorns 21-0 in the final six-plus minutes of the game to keep their undefeated season alive with a 42-35 win Friday.

In a game full of big plays, Las Vegas quarterback Ja’Shawn Scroggins hit Jaelin Gray on a 31-yard touchdown pass with 23.3 seconds remaining in the game to give the Wildcats (6-0, 1-0) the win in the Northeast League opener for both teams.

“A lot of people think these things are happening because of miracles, but we work our butts off,” coach Erick Capetillo said. “At 5 a.m. in the summer — not one team in the city wakes up at 5 a.m. — these guys do. That grind shows in these types of close games. I owe it all to the players. These guys showed up, executed and finished the game for 48 minutes.”

However, the Wildcats refused to go away.

The Longhorns appeared to strike another dagger into the Wildcats when quarterback Evan Olaes found Aaron Holloway on a 60-yard strike to set the Longhorns up at the Las Vegas 13. However, the Wildcats’ defense held and forced a long field-goal attempt, which was wide left.

It took Las Vegas just two plays to score again. Scroggins found Miles Davis open on a short screen pass, and Miles took it 78 yards for the touchdown to tie the game at 35 with 3:27 remaining.

The Longhorns again drove into Wildcats territory, but an Olaes pass was intercepted by Fernando Carmona at the Las Vegas 12-yard line to end the drive.

Starting with one minute remaining, Scroggins drove the Wildcats 88 yards in 37 seconds, completing the comeback when he found Gray in the end zone.

Gray finished with five catches for 84 yards and three touchdowns — the first three-touchdown night of his career. Gray also made a catch earlier in the drive that gave the Wildcats a key first down.

“I have to give that credit to my quarterback,” Gray said. “(On the first-down catch) I was supposed to run one route, he told me to run this route. It worked out, and we called a timeout. Coach had us on the sideline, and he called the (touchdown) route. I scored the touchdown, but I was just a pawn.”

“We talked about it a halftime when we went down by two touchdowns,” Gray said. “There were a lot of mad people in the locker room. We had never been down going into halftime before like this, and we just knew what we needed to do to come back out get the touchdowns. It just happened to come in the fourth quarter for us.”

Davis caught seven passes for 205 yards and two touchdowns, and David caught six passes for 127 yards and a score.

“I’m extremely proud of them,” Capetillo said. “Nobody in the city counted us in from the very first game, and that’s OK. The guys in that locker room believe it, and that’s all that matters to us.”