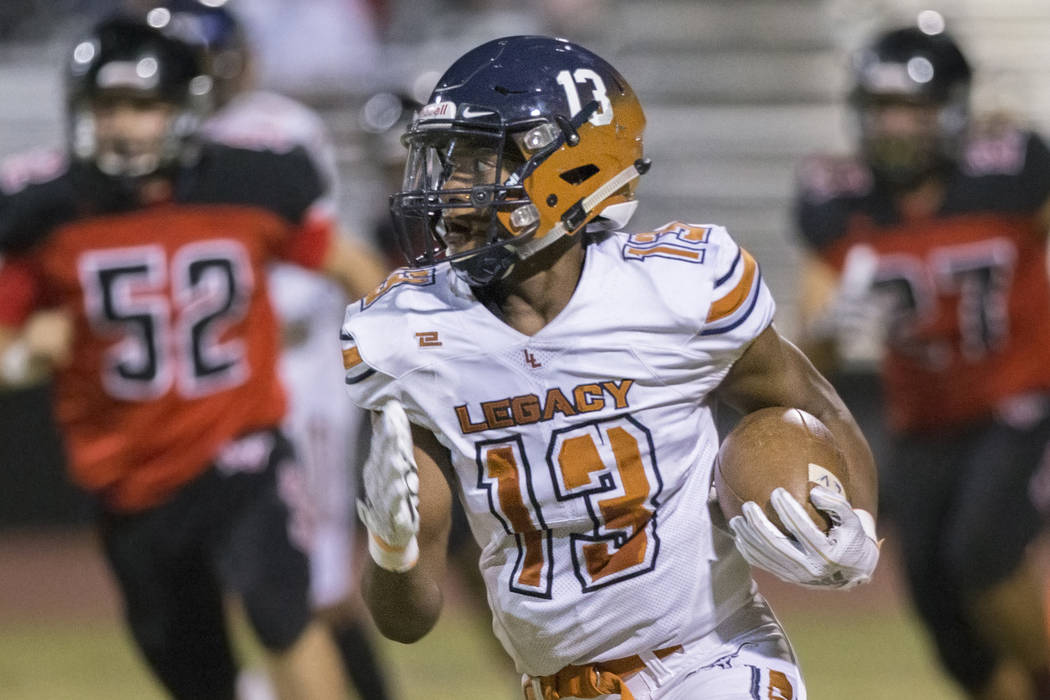 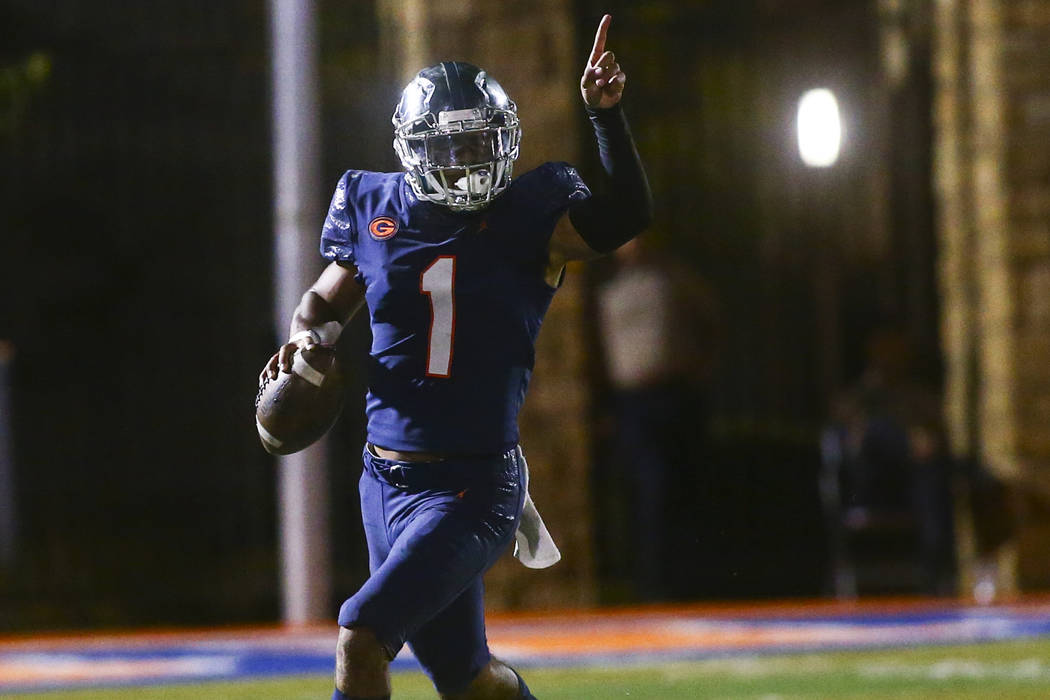 Bishop Gorman's Micah Bowens (1) motions to teammates during the first half of a football game against Orem at Bishop Gorman High School in Las Vegas on Friday, Aug. 23, 2019. (Chase Stevens/Las Vegas Review-Journal) @csstevensphoto 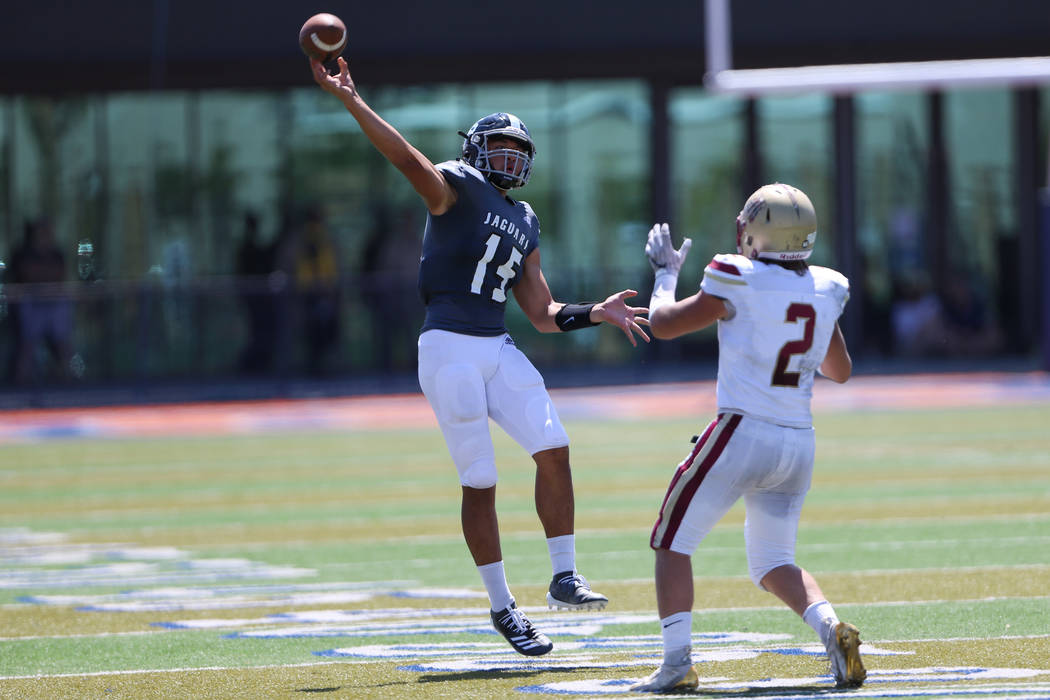 Aaron Holloway can vividly remember walking in a new elementary school as a fifth-grader, even though it was six years ago.

“I walk in class and I see Evan,” Holloway said. “I’m like, this is going to work out. I see the connection. As soon as we locked eyes, I saw it.”

Evan is Evan Oleas, and that initial meeting has turned into an inseparable friendship that has the two at each other’s side most of the time. Now juniors at Legacy High School, that connection has never been stronger on or off the football field.

With Oleas at quarterback and Holloway as his go-to wide receiver, they’ve become one of the many tandems in the valley that leave defenses scrambling for answers.

“When they were playing on the freshman team, we as coaches would watch Evan throwing to Aaron and were like, ‘holy cow,’” Legacy coach John Isola said. “Every game they’re hitting two or three bombs, and we couldn’t wait to see what they were going to do when we got them on varsity.”

Bishop Gorman quarterback Micah Bowens and wide receiver Rome Odunze have been similarly impressive. They wowed opponents in helping the Gaels win a 10th straight Class 4A state championship last season and have taken up where they left off as seniors this season.

Never was their potency more evident than last Saturday against Servite. Bowens completed 13 passes for 229 yards. Odunze caught 10 for 217 yards and three touchdowns.

It’s not as if the Gaels are trying to hide their intentions. Gorman coach Kenny Sanchez said before the season it’s no secret that “it’s him to him.” But even he was excited about his dynamic duo’s performance against Servite.

“They’re just special football players, and they needed (a game like) that to happen,” Sanchez said after the game. “Certain people just spark the whole team.”

Bowens has thrown for 564 yards and seven touchdowns without an interception. Odunze leads the valley with 21 receptions for 443 yards, and his five touchdowns are tied for the most.

The other receiver with five scores is Las Vegas’ Miles Davis. A senior, Davis has benefited from junior Ja’Shawn Scroggins’ maturation in his second year as starting quarterback. Scroggins leads the valley with 751 passing yards and nine touchdown passes, and the Wildcats have fed off of their big plays in a 3-0 start that matches their win total from last season.

“Those guys are the hardest working individuals on our team, and they’re extremely competitive,” Las Vegas coach Erick Capetillo said Friday after they combined for touchdown passes of 75 and 64 yards to lift the Wildcats to a 39-28 victory over Silverado. “That’s what’s good about having those guys is they can take the game to the next level with their leadership.”

Leadership is an area in which Legacy’s Oleas has become more comfortable in his second year as a starter. His numbers reflect that. Last season, Oleas threw for 840 yards and rushed for 207. In two games this year, he has 479 yards passing and 275 on the ground. Holloway is averaging 29 yards on his 10 catches and has found the end zone twice, including a long screen pass last week.

Desert Pines quarterback Rjay Tagatases hasn’t found his go-to receiver, but that’s because the sophomore has a multitude of weapons. In the Jaguars’ 42-3 win over Logan (Utah) on Saturday, he threw four touchdown passes to four different receivers. The first was a quick screen that went to Michael Jackson for 80 yards on the first play of the game. Jackson has a team-best 201 yards receiving, but Tagatases also has the luxury of throwing to 6-foot-8 tight end Darnell Washington, the state’s No. 1 recruit, who also had a 25-yard score in the win.

Several others are making a name for themselves around the area as well.