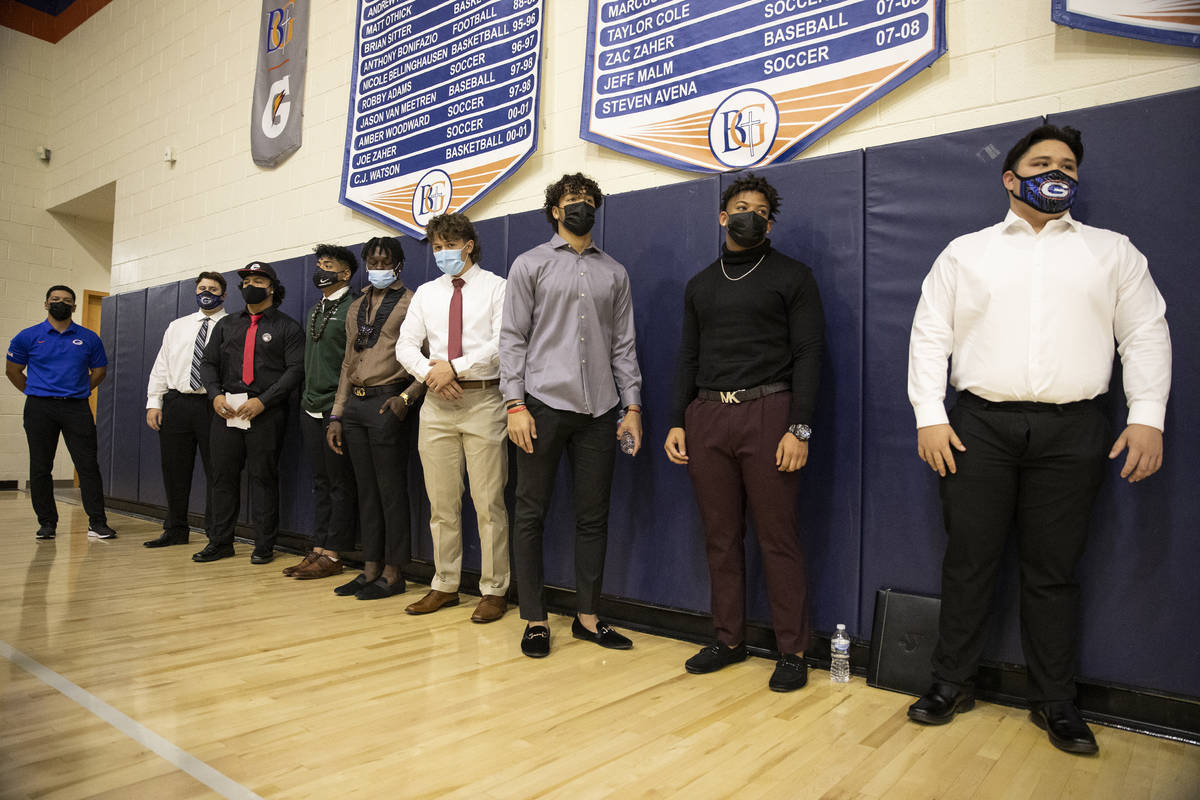 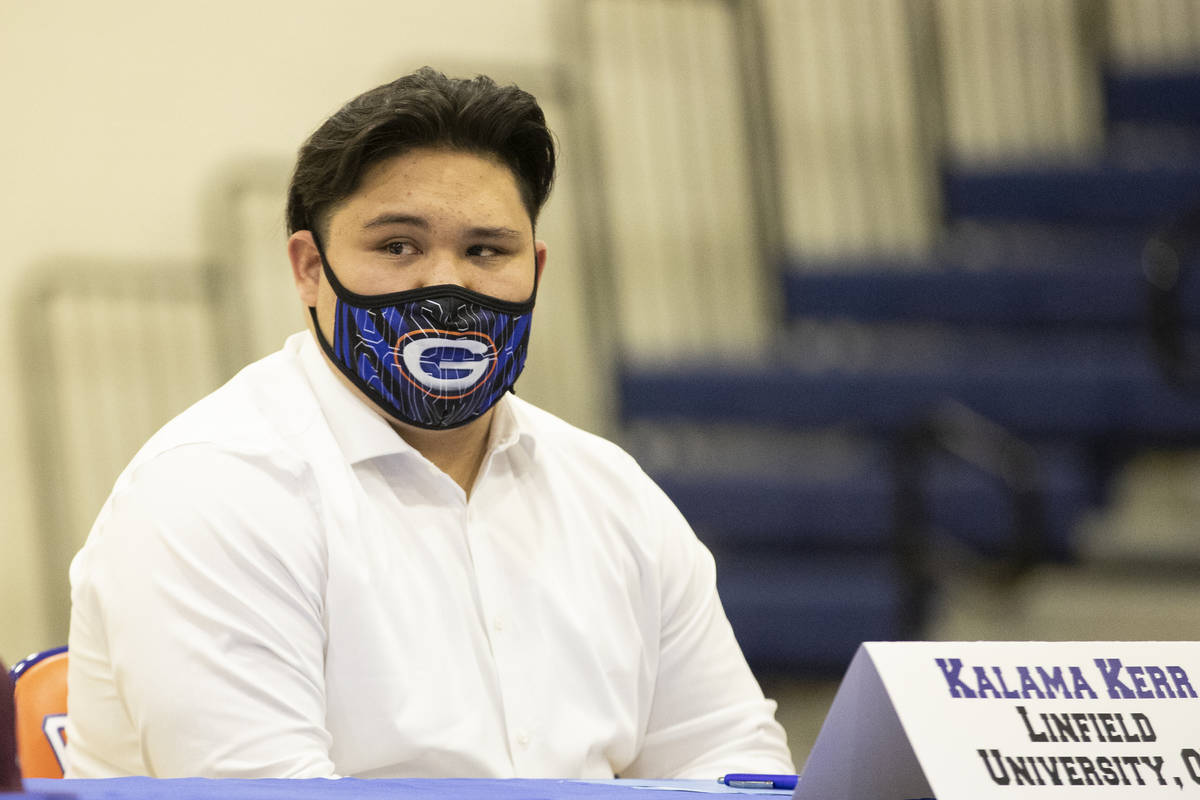 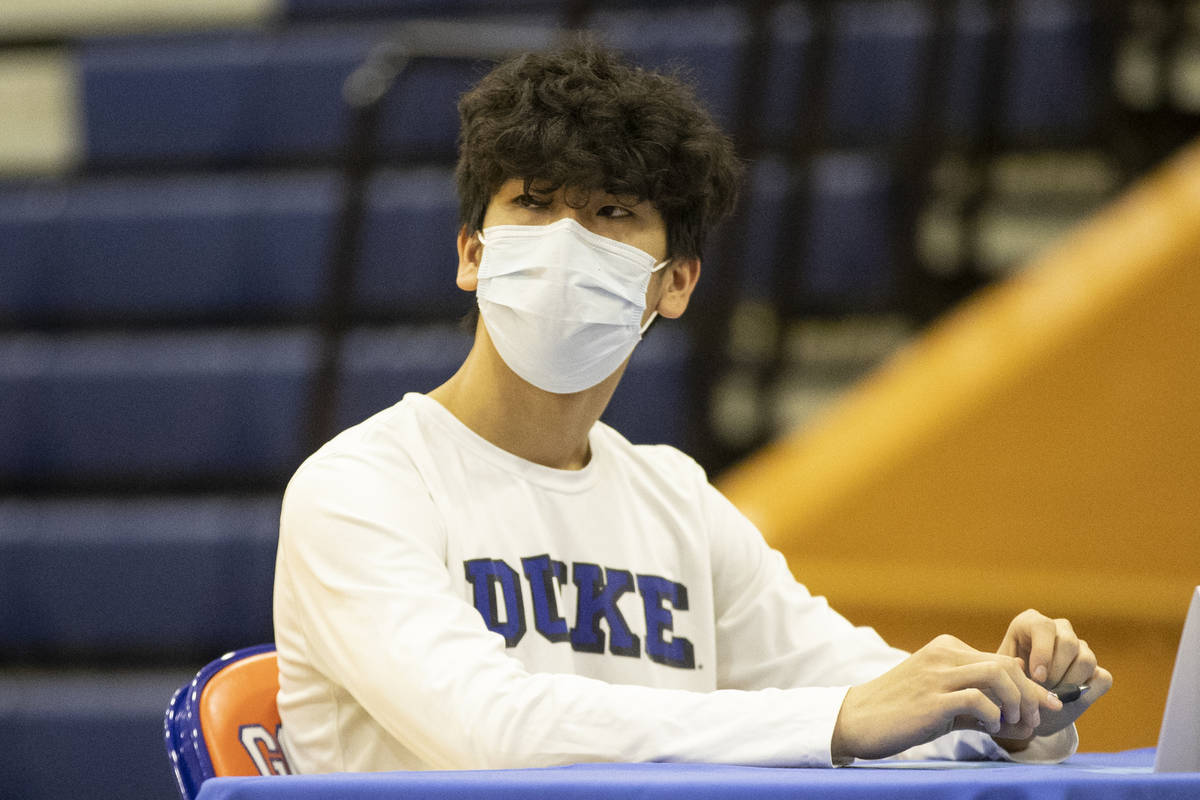 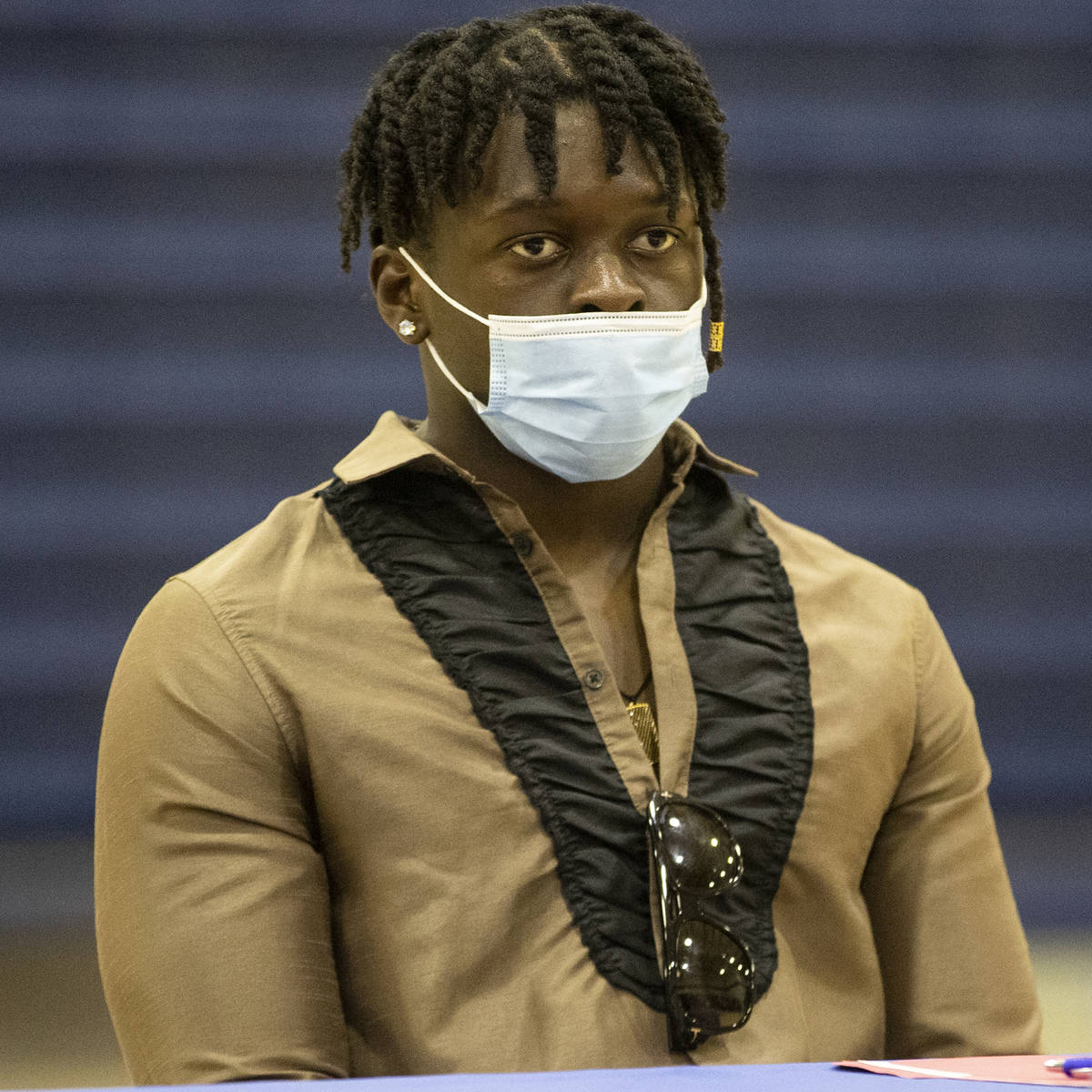 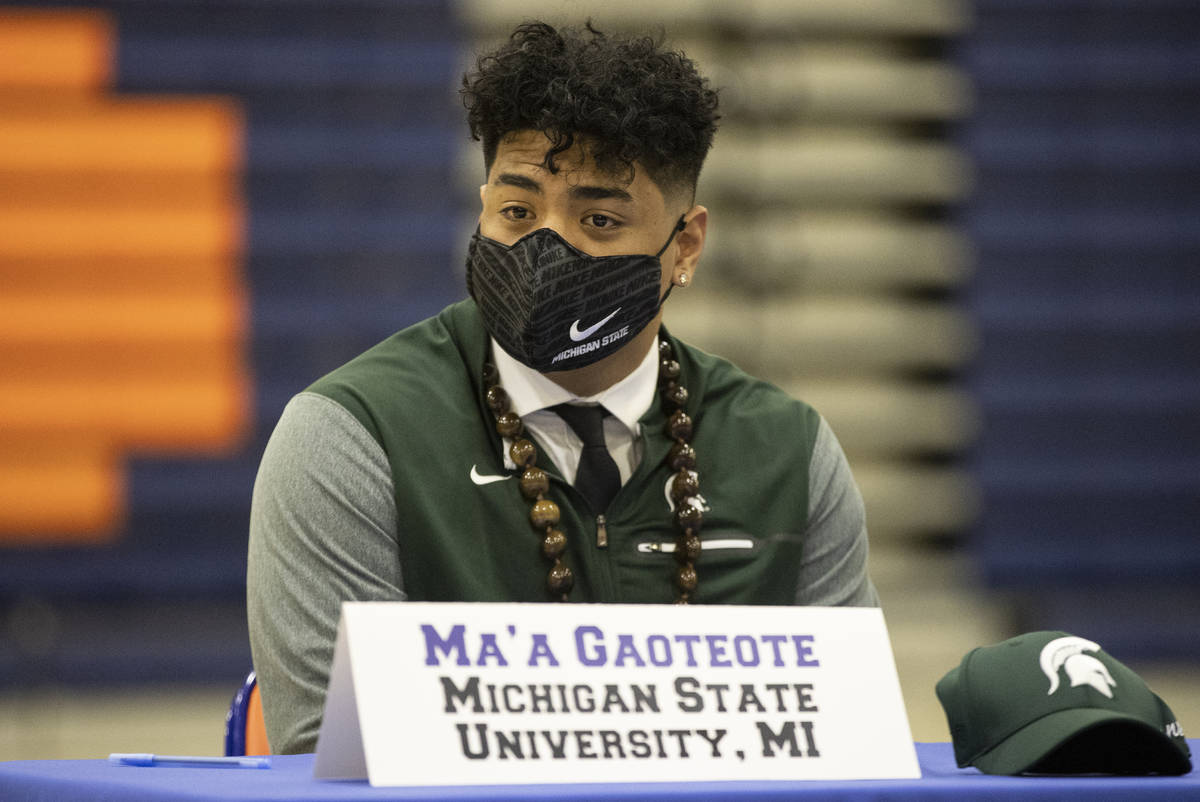 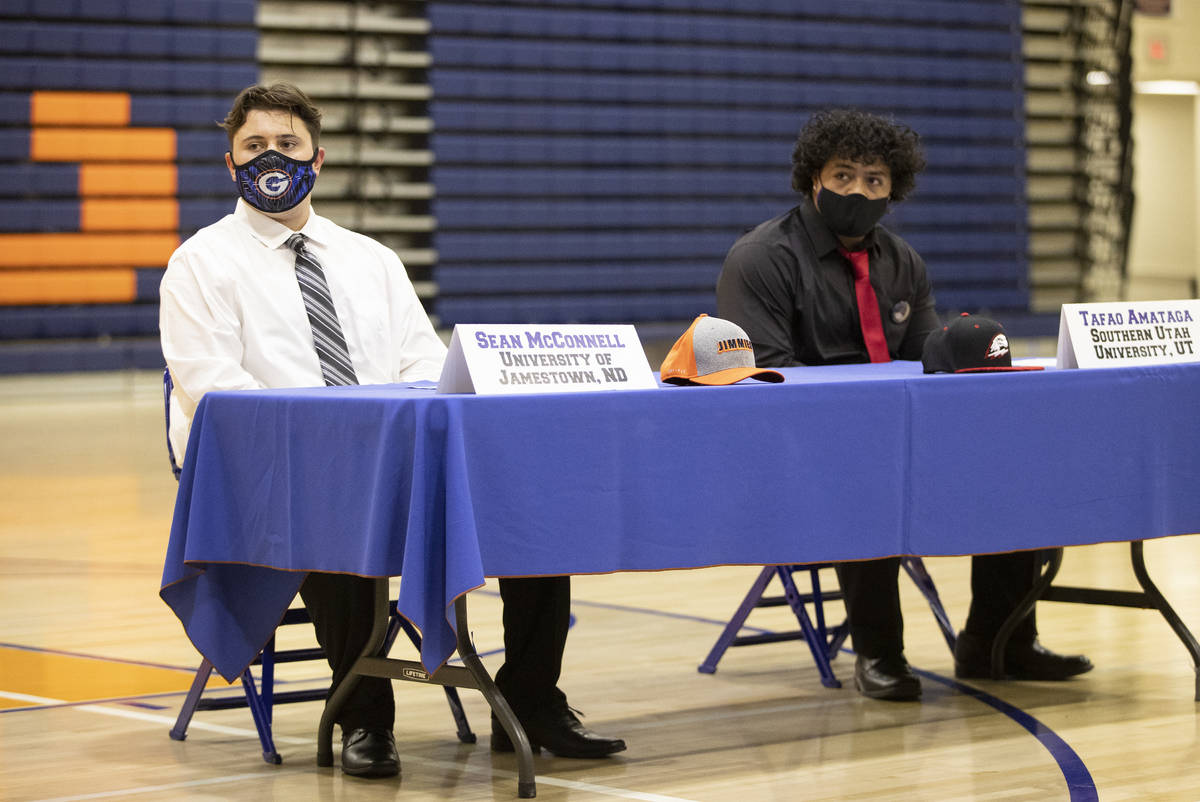 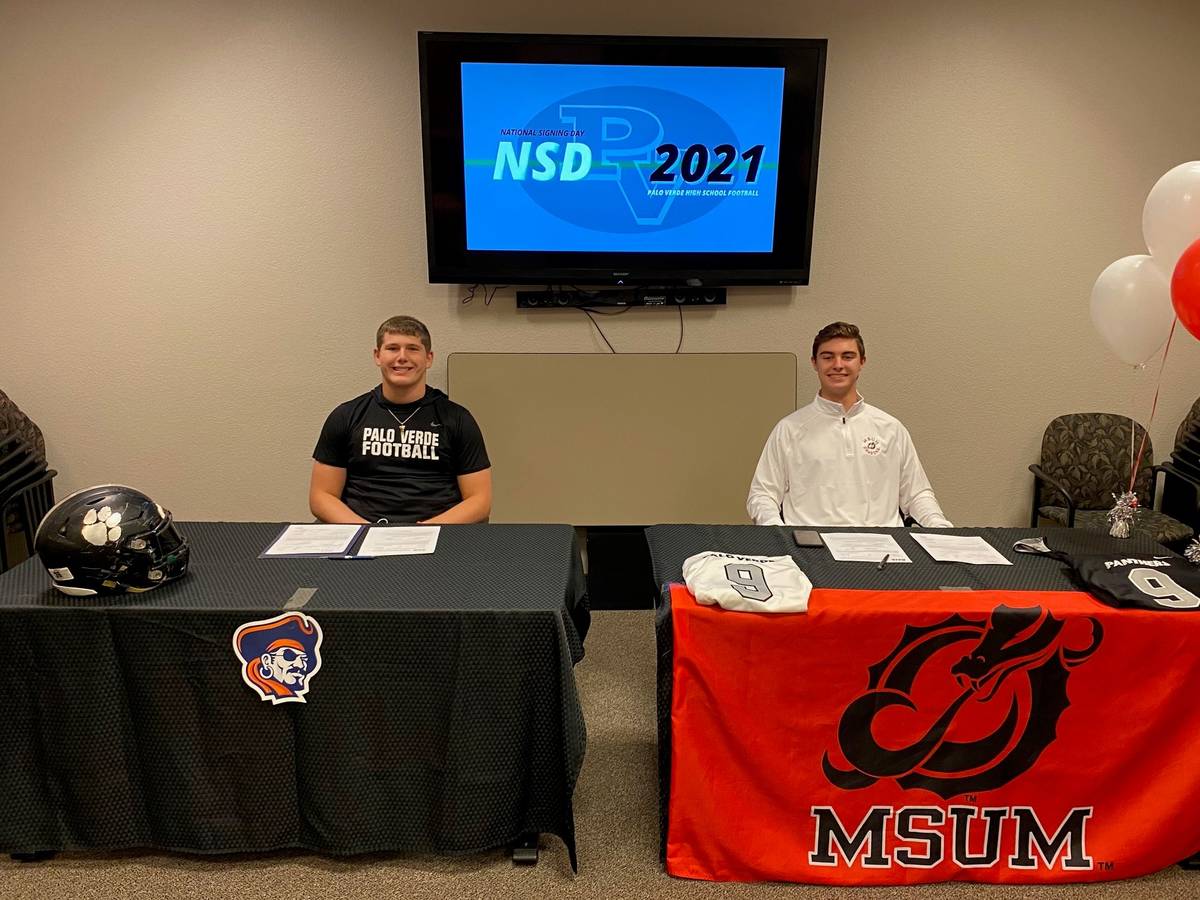 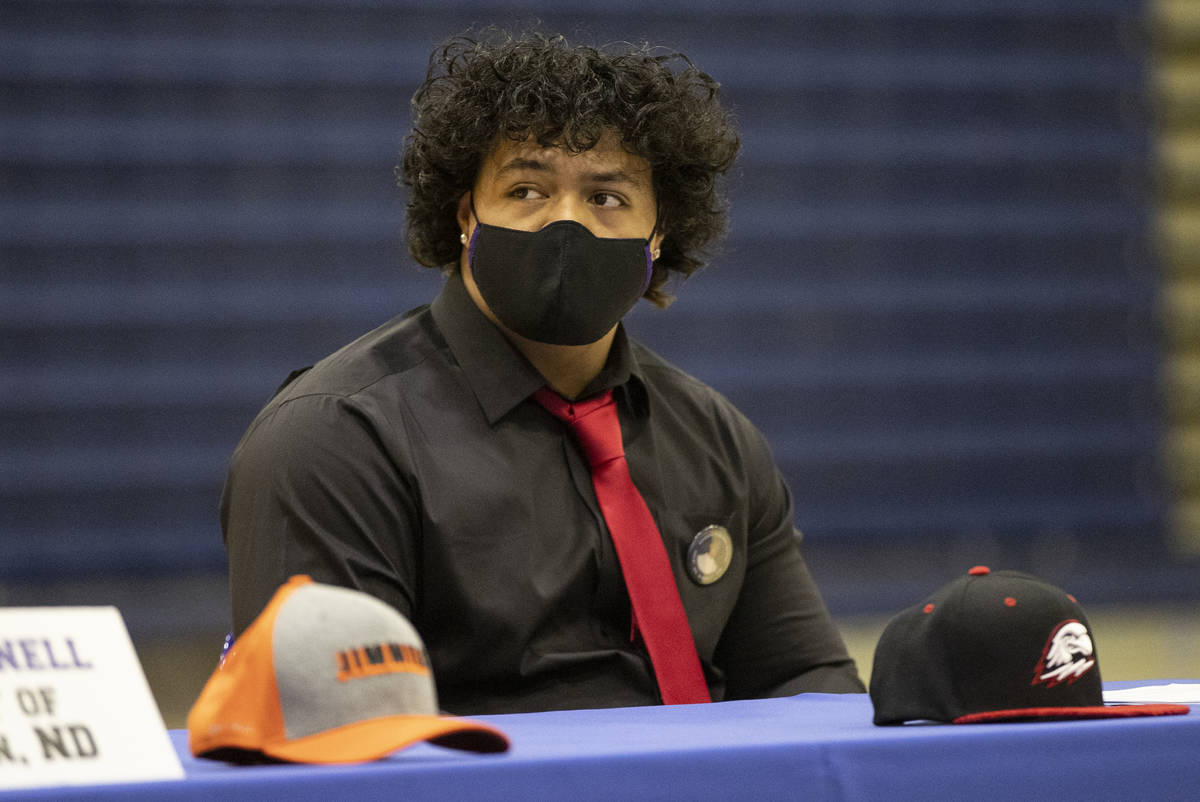 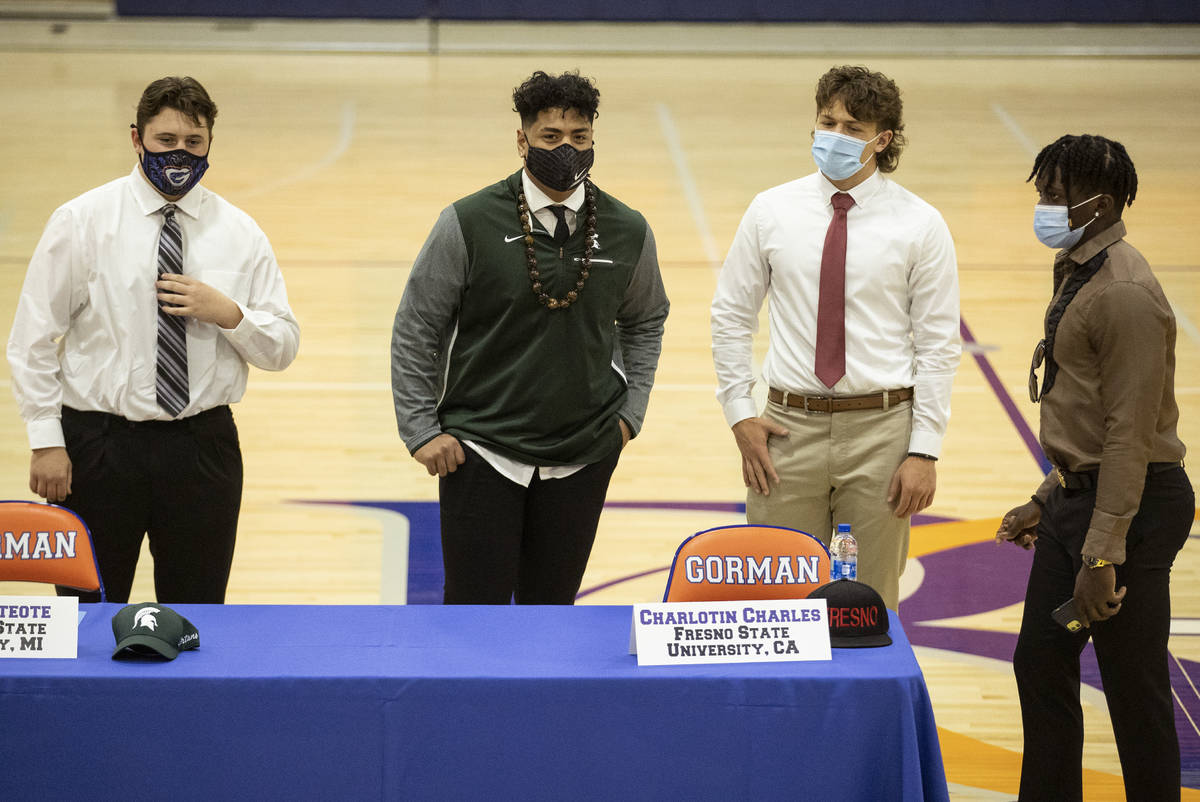 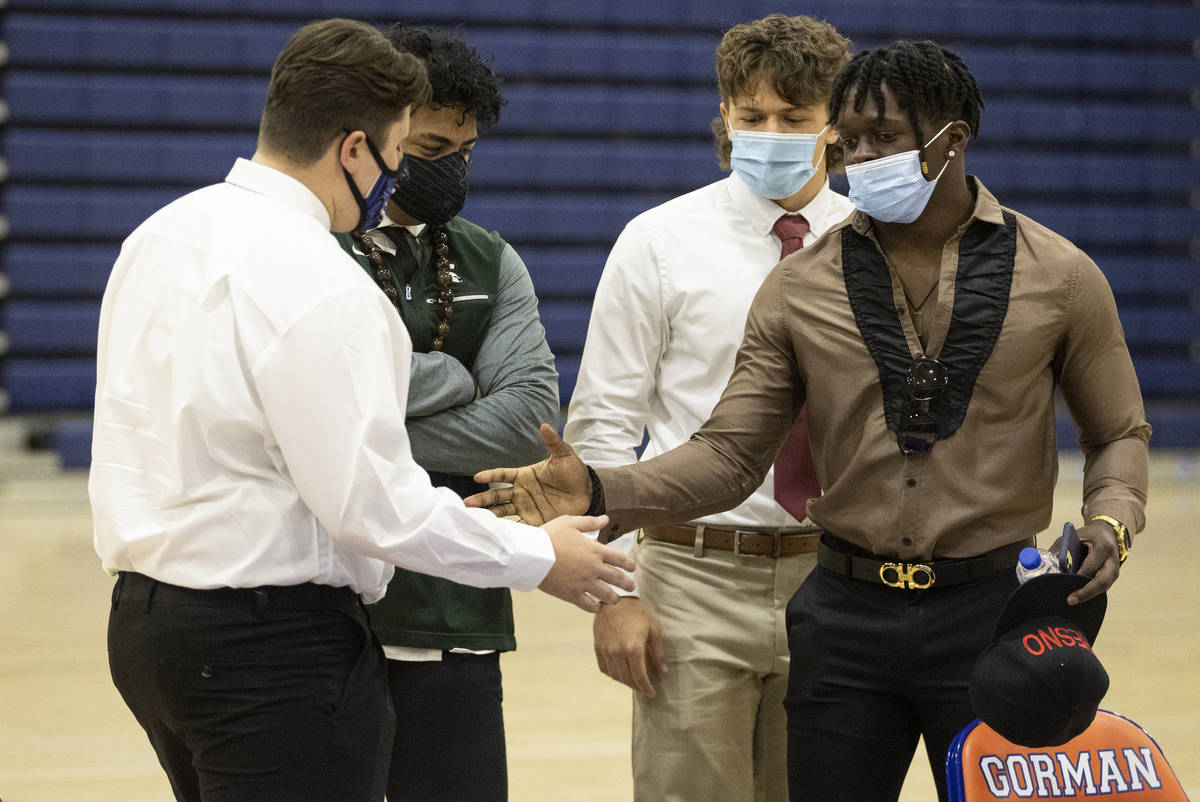 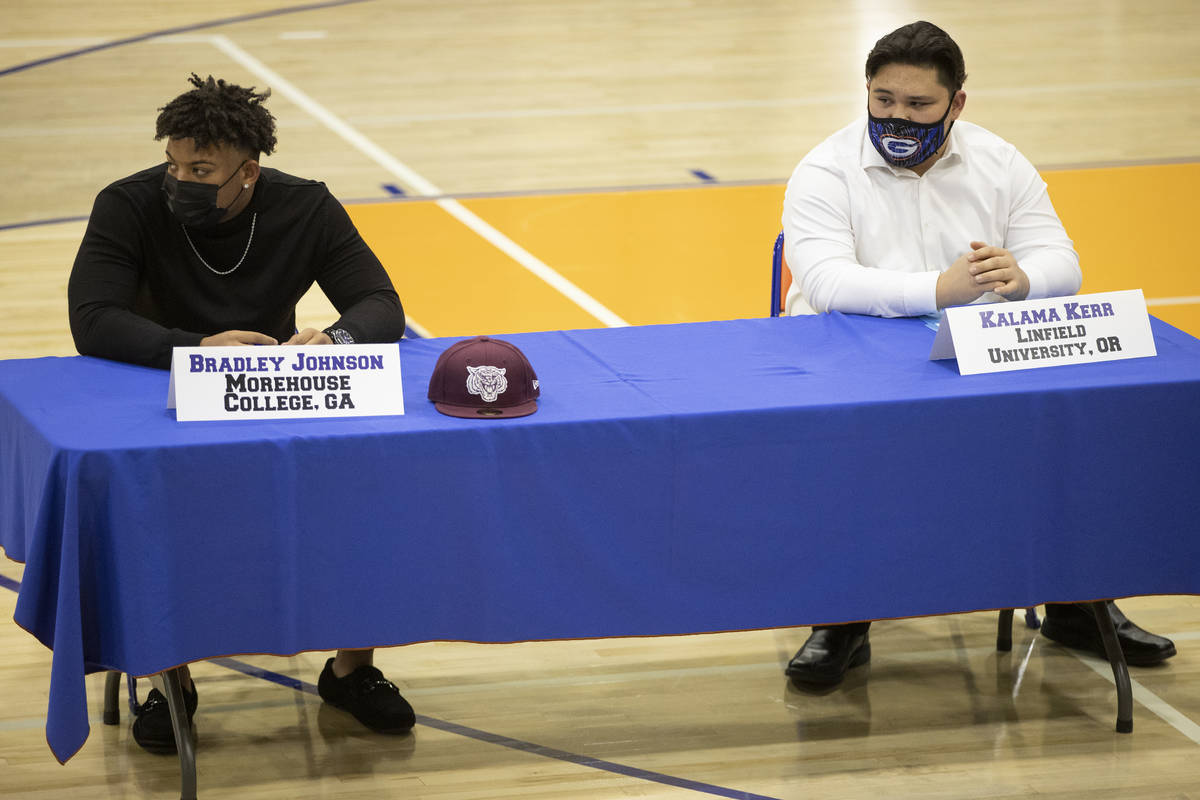 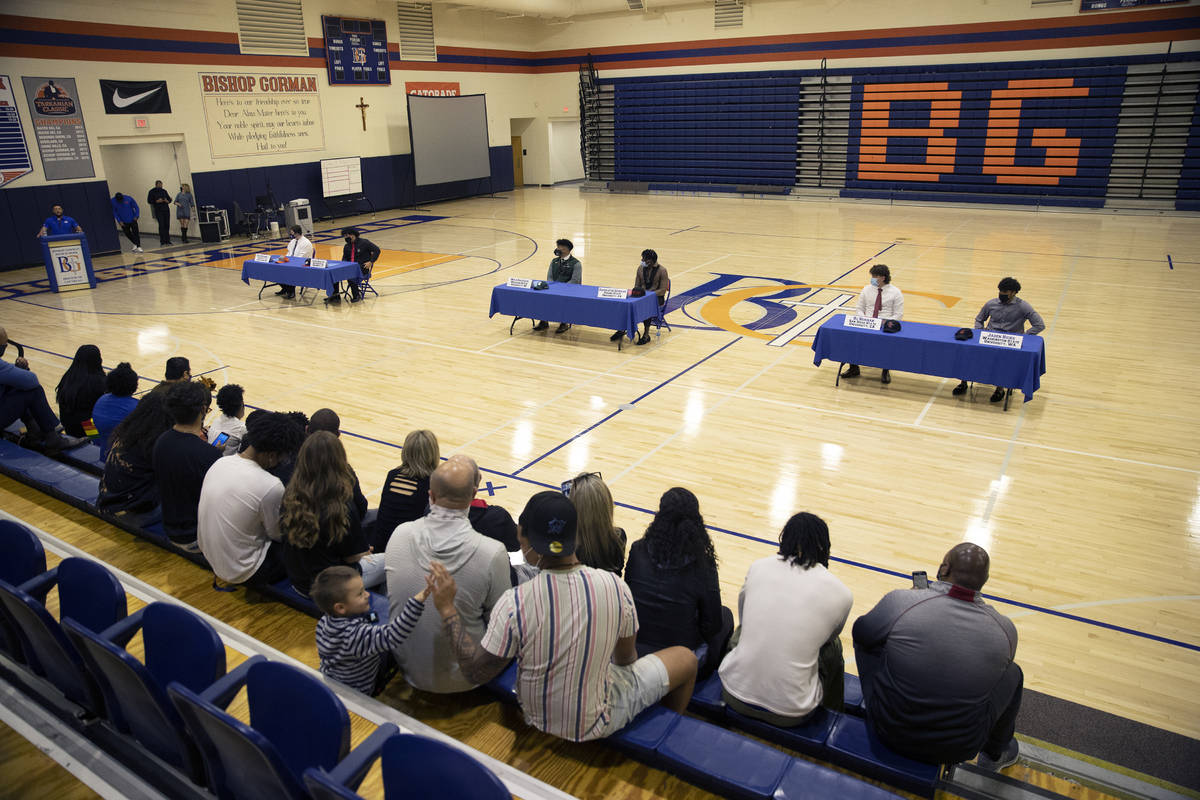 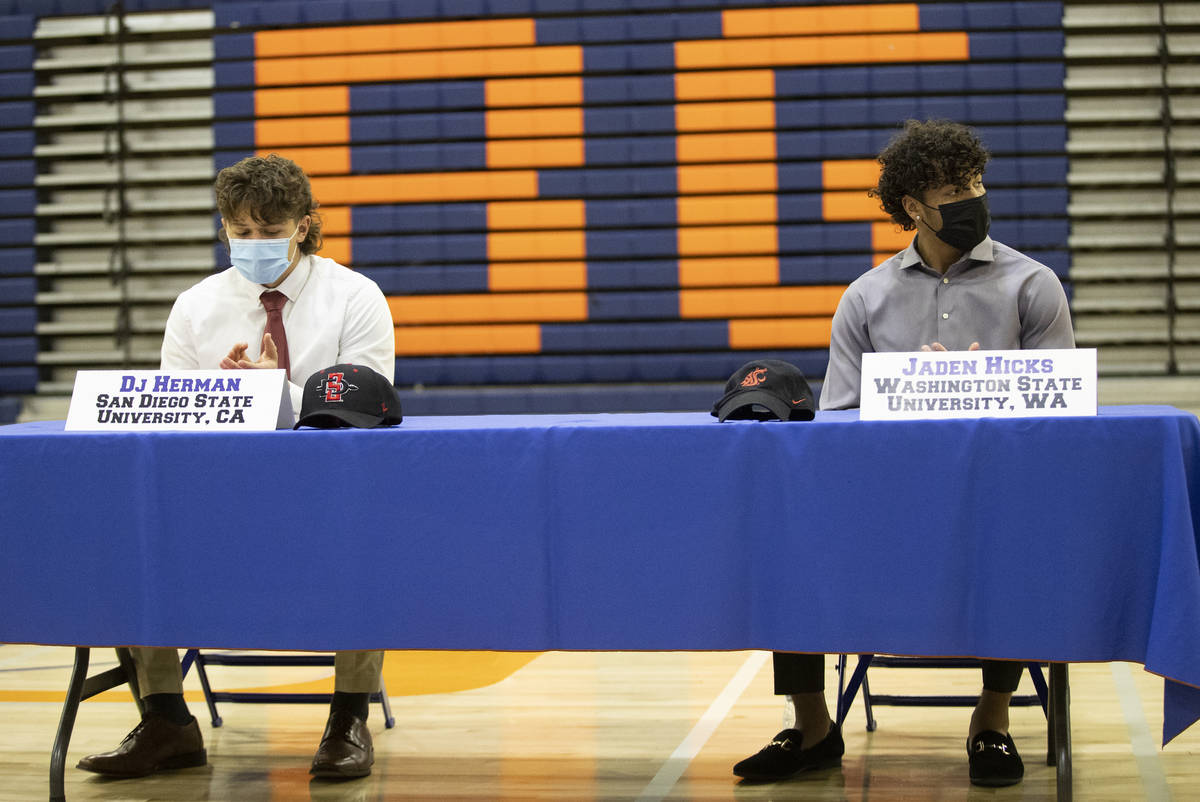 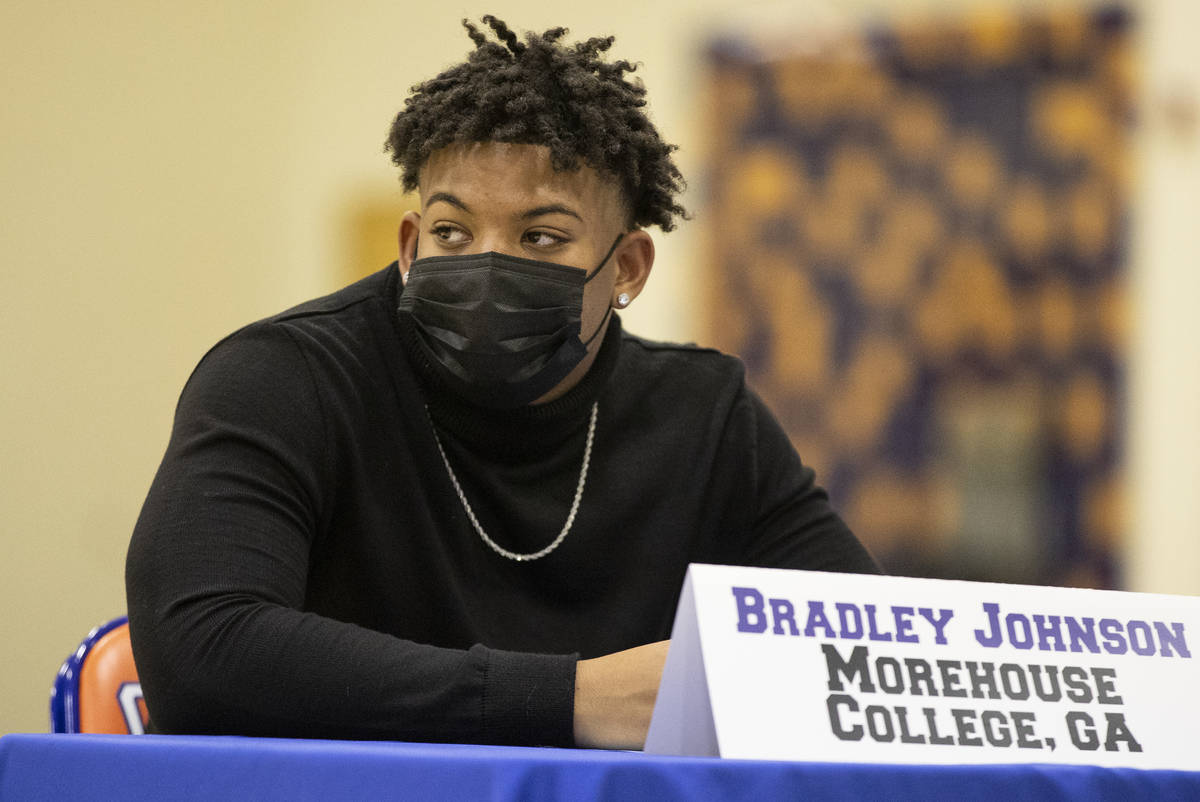 Many high school football players throughout the valley have been left wondering what might have been after losing a chance to play their senior season.

National signing day presented some with a chance to look forward to what could be.

“I’m very excited about that,” Hicks said. “We’d always compete at practice, so it’s going to be fun.”

Palo Verde kicker Zach Moore is headed to Minnesota-Moorhead, and defensive lineman Tanner Vaughan will play for Northern Sun Intercollegiate Conference rival Mary of Bismarck, North Dakota. They have differing opinions of what would happen if one of their games comes down to a kick.

Moore, sitting at the next table, scoffed, “I’ll send it over your head.”

The recruiting process is usually not a smooth one, and COVID-19 only made it more difficult.

Moore said he was constantly sending direct messages to college coaches, just hoping that he would get a reply to one for about every 50 he sent.

“You definitely had to be more aggressive this year,” Moore said. “I was sending two, three, four DMs to each coach every single day. I was fortunate (Minnesota-Moorhead) was the one response I got and that they valued me enough to take the time they did.”

The math was a little trickier, too. With the NCAA extending an extra year of eligibility to all fall sports athletes, that meant fewer scholarships were available.

Vaughan had an offer from Central Washington to play tight end and was planning a visit, “but they had a bunch of seniors stay and pulled the offer.”

Arbor View offensive lineman Tim Vaughn will join Vaughan at Mary. He didn’t have an offer pulled from him, but said it was difficult to stay patient.

“COVID changed the whole process,” Vaughn said. “You had to wait for visits, and it was hard to talk to colleges. Still, I’m very blessed to have this opportunity.”

Vaughn said Mary reached out to him on Twitter to initiate the recruiting process. For Shimizu, it was a “random phone call” that sent him to Idaho State.

“It wasn’t on my radar at all,” Shimizu said. “I took a trip up there, and I loved the atmosphere. It’s been a long, tough road with ups and downs and everything getting pushed back. We got canceled, quarantined.”

Being thankful for the opportunity was a common refrain among the signees. After all, not much is guaranteed in recruiting, especially with COVID-19 in the mix.

“This gives you relief to know you weren’t stranded,” Moore said. “A lot of my friends who didn’t have the ability to get straight-up offers might not get an opportunity. It’s bittersweet to know you got a spot but that some of the other guys that could have had a spot won’t.”