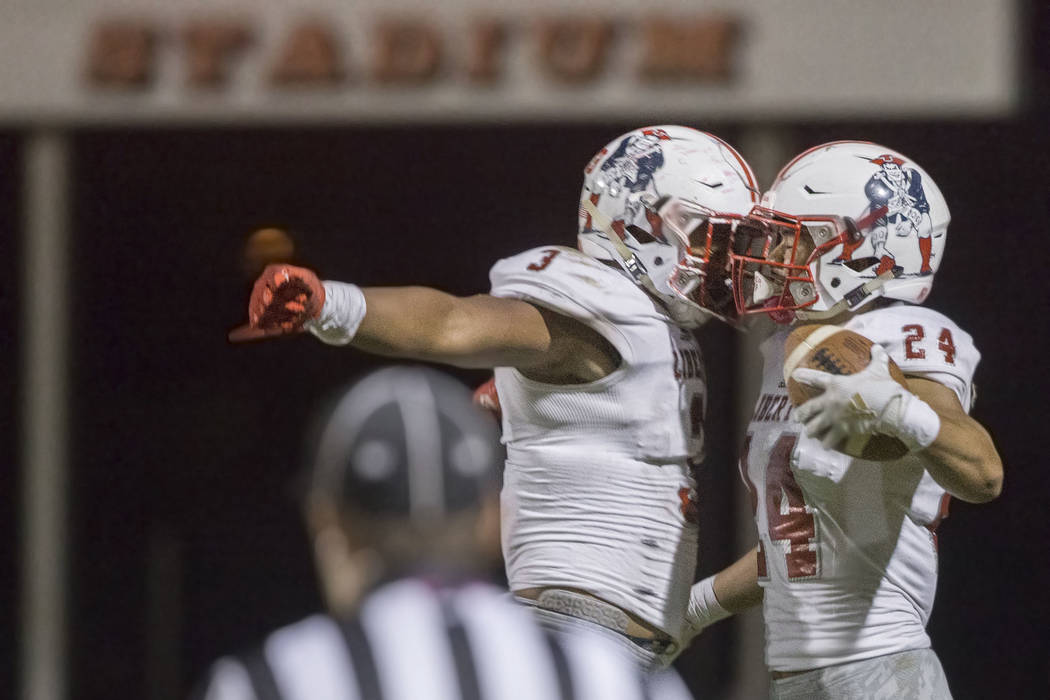 Liberty junior linebacker Zephania Maea (3) and senior safety Lehi Ausage (24) celebrate after Ausage returned an interception for a touchdown in the first quarter during the Patriots road game with the Chaparral Cowboys on Friday, Oct. 4, 2019, at Chaparral High School, in Las Vegas.(Benjamin Hager/Las Vegas Review-Journal) @benjaminhphoto 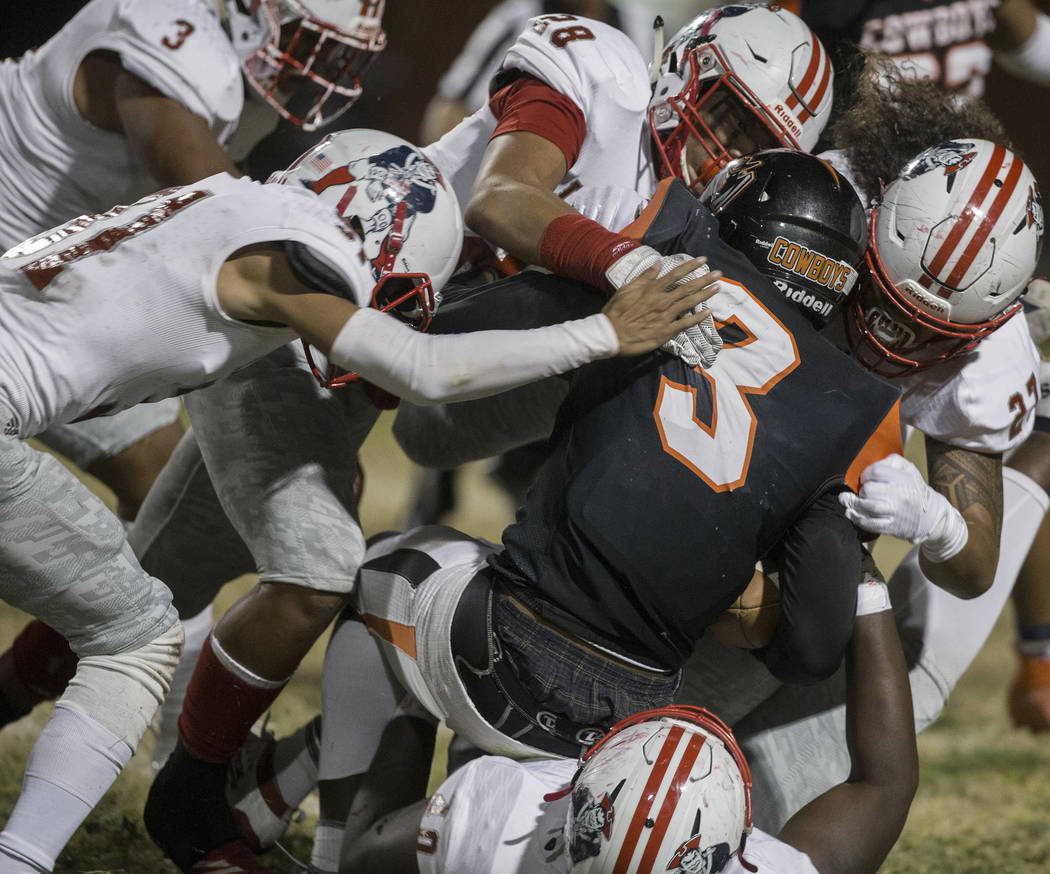 Chaparral senior running back Meshach Hawkins (3) is stacked up by a gang of Liberty defenders in the first quarter on Friday, Oct. 4, 2019, at Chaparral High School, in Las Vegas. (Benjamin Hager/Las Vegas Review-Journal) @benjaminhphoto 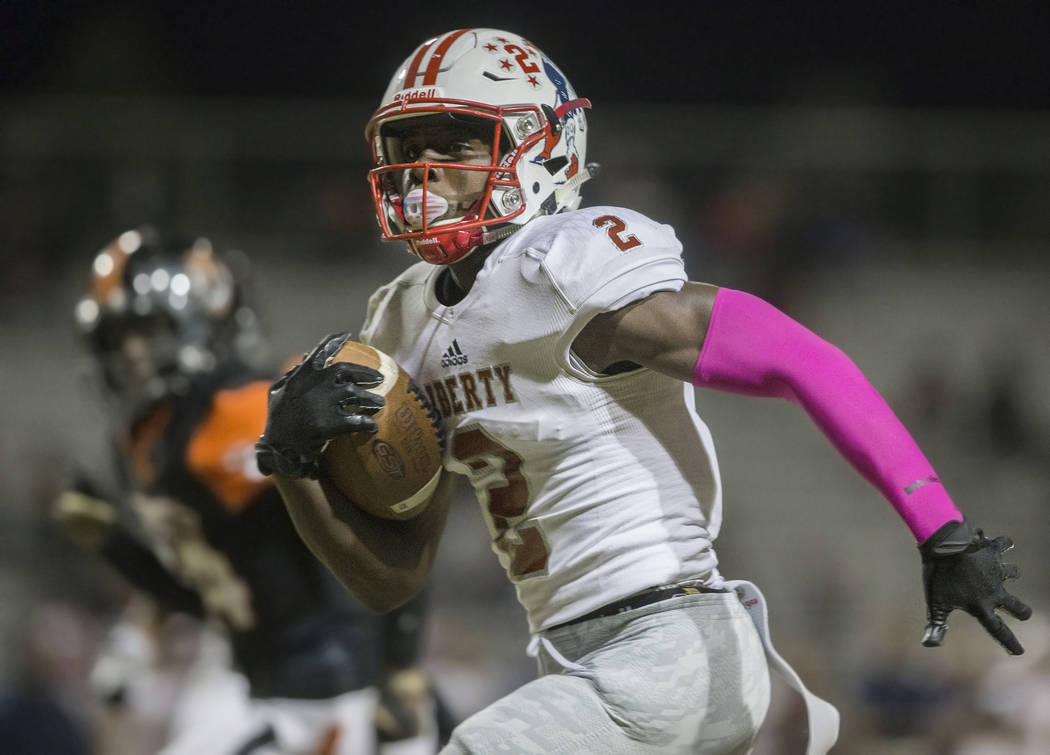 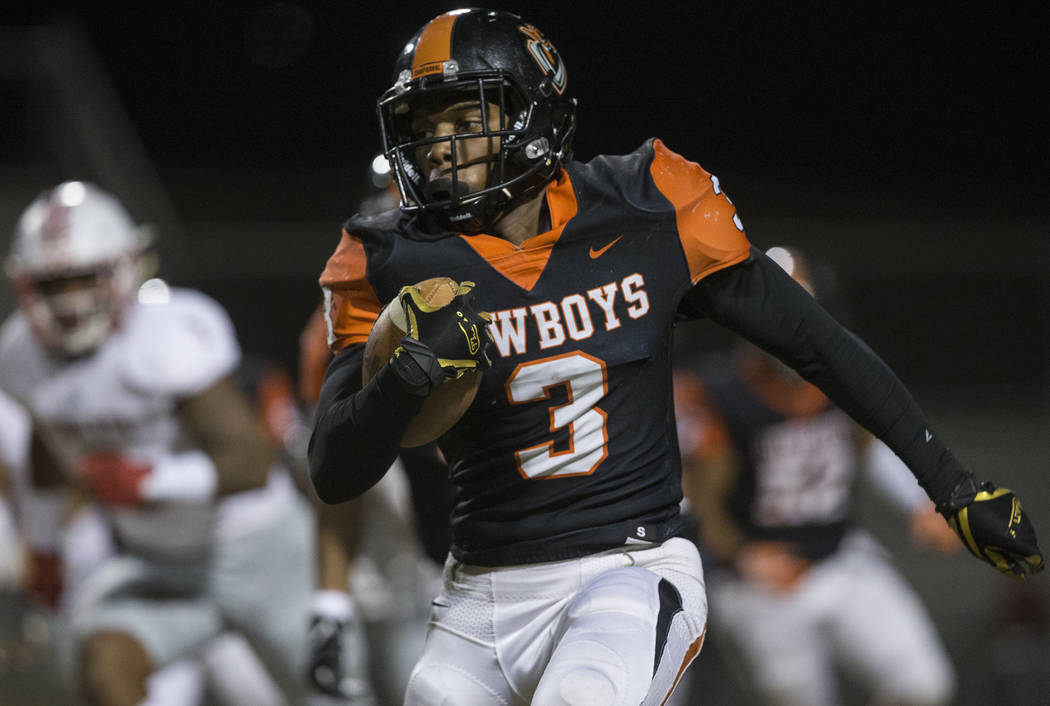 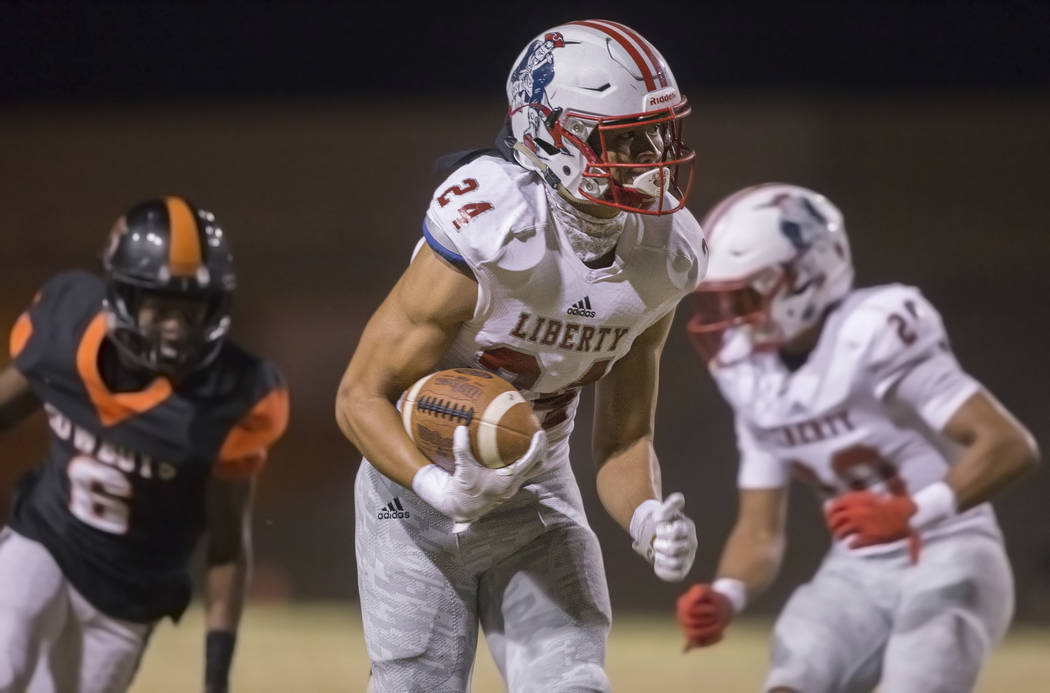 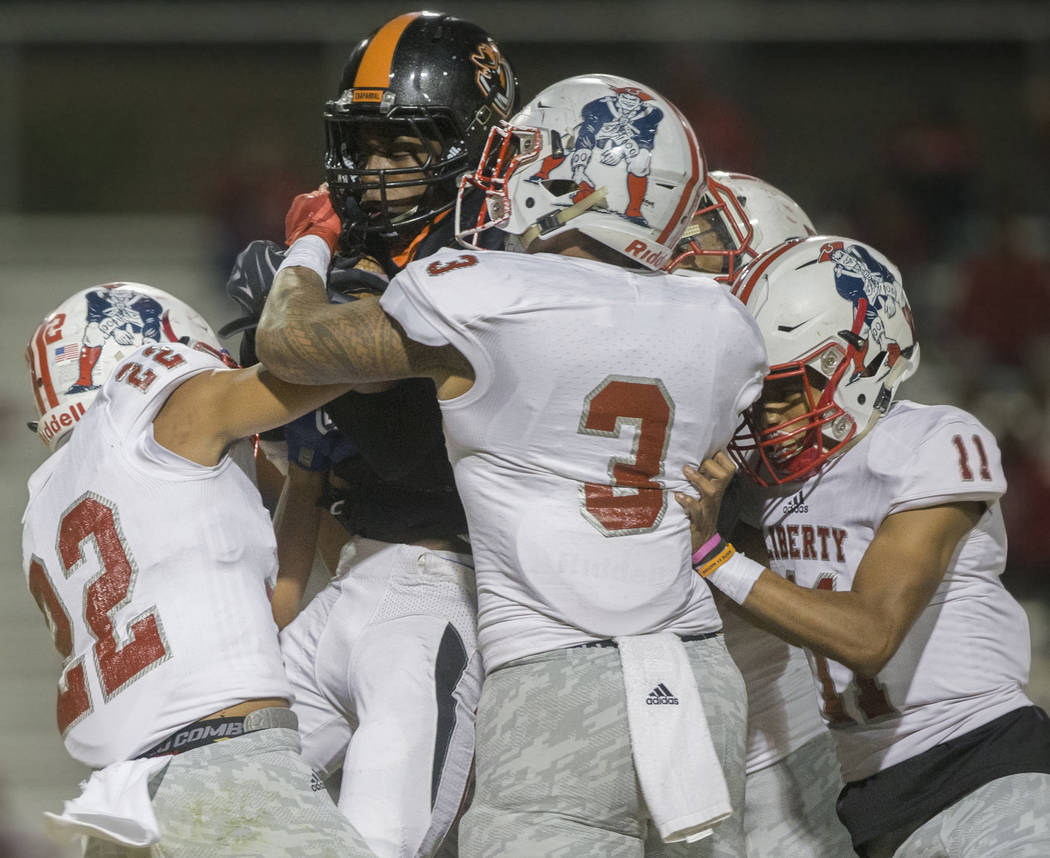 Chaparral senior running back Meshach Hawkins (3) is stacked up by a gang of Liberty defenders in the second quarter on Friday, Oct. 4, 2019, at Chaparral High School, in Las Vegas. (Benjamin Hager/Las Vegas Review-Journal) @benjaminhphoto 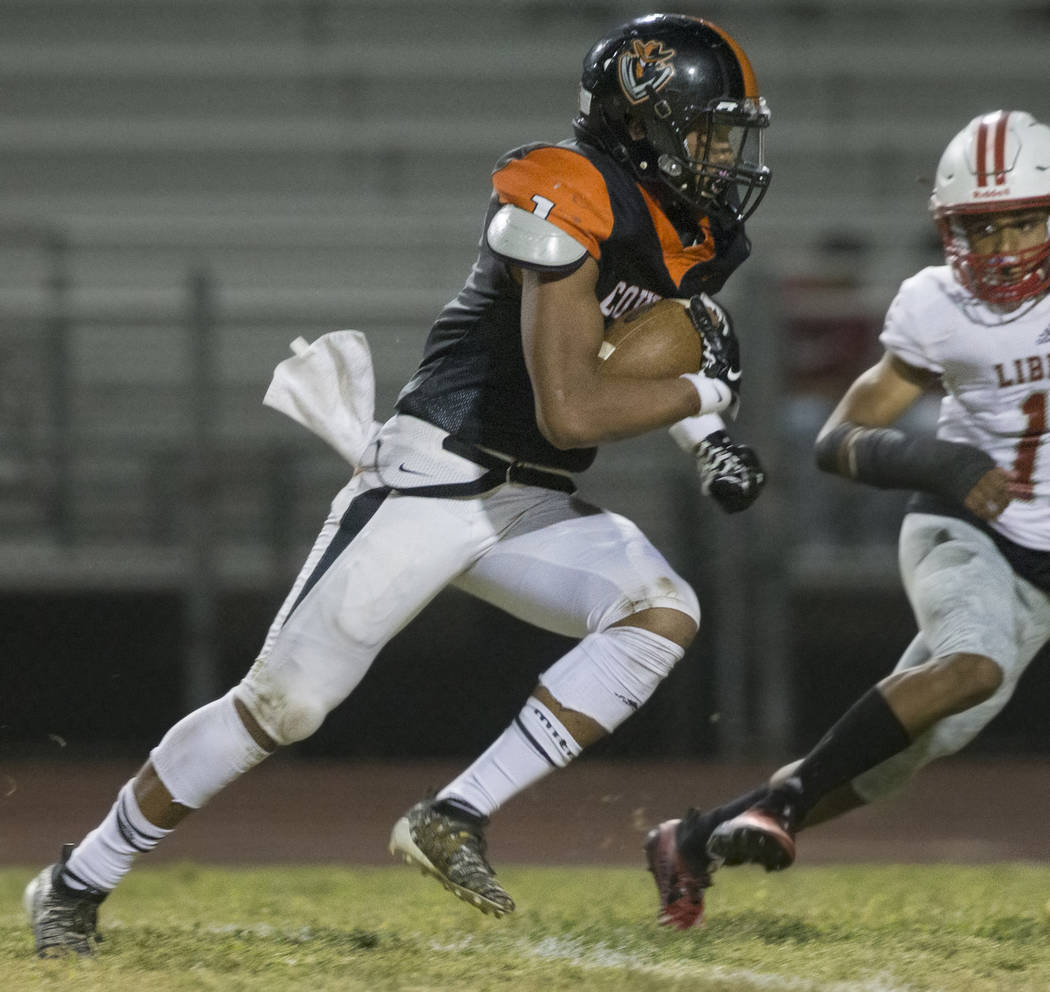 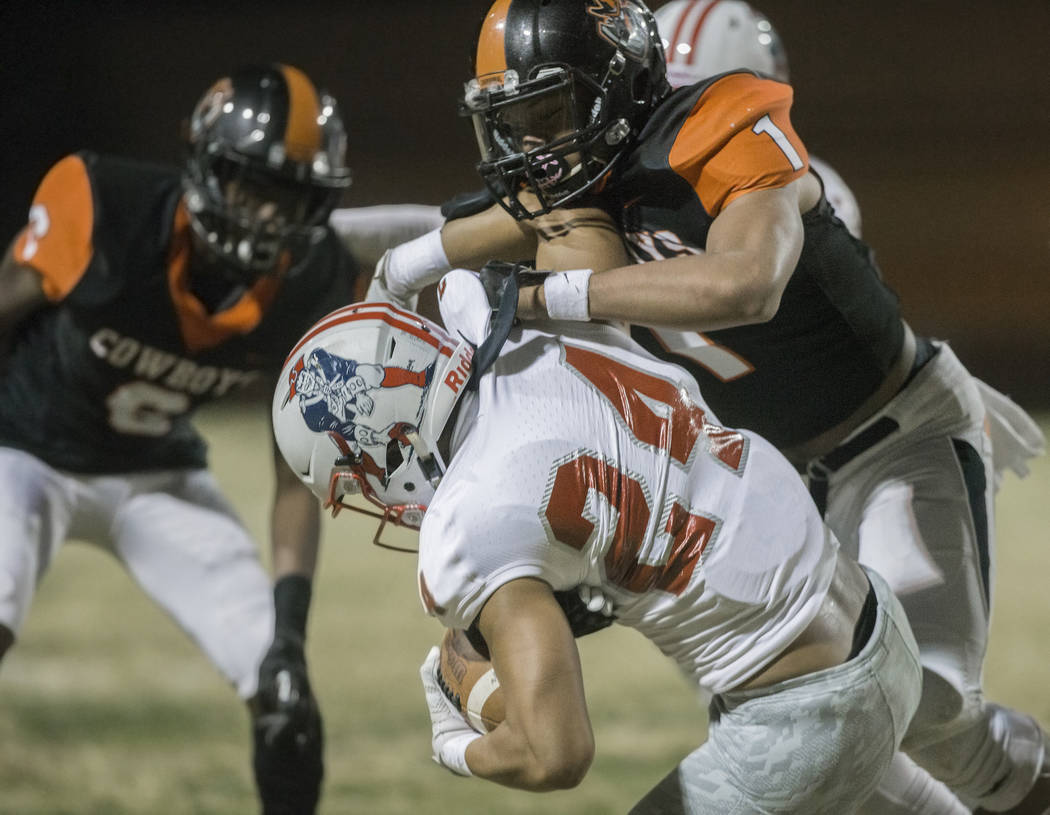 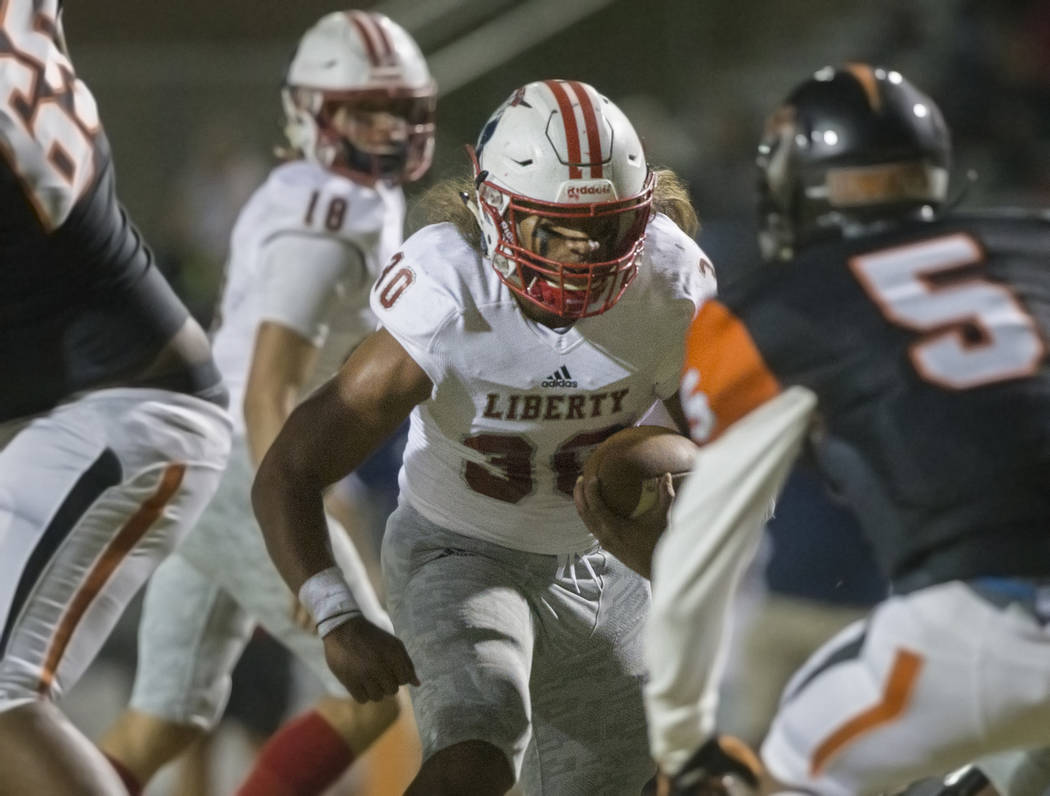 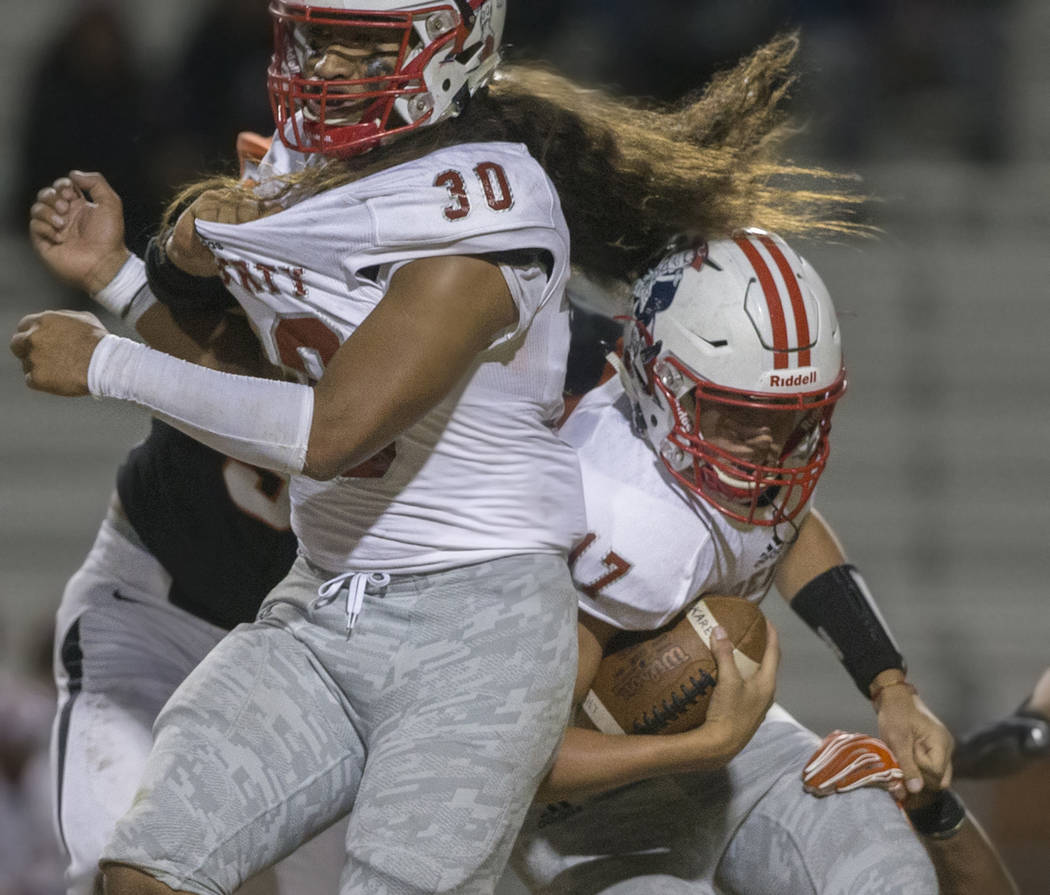 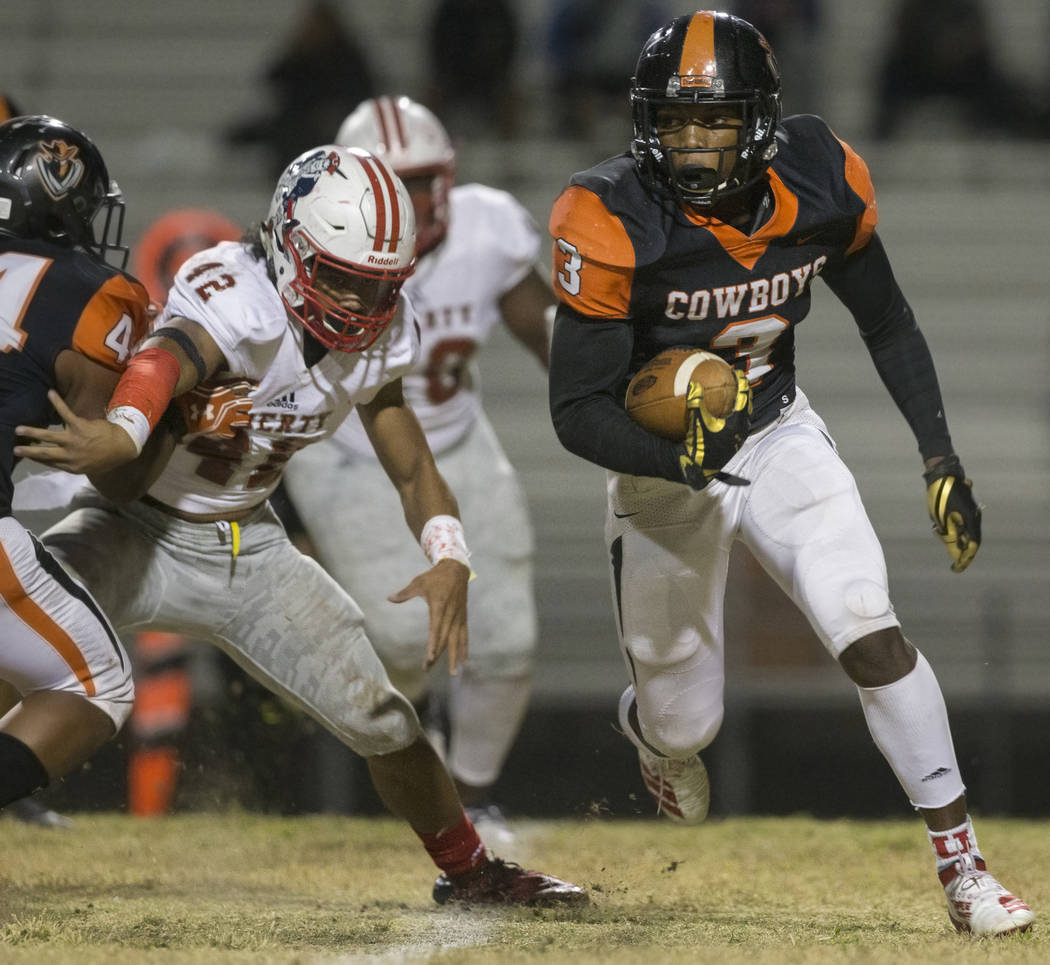 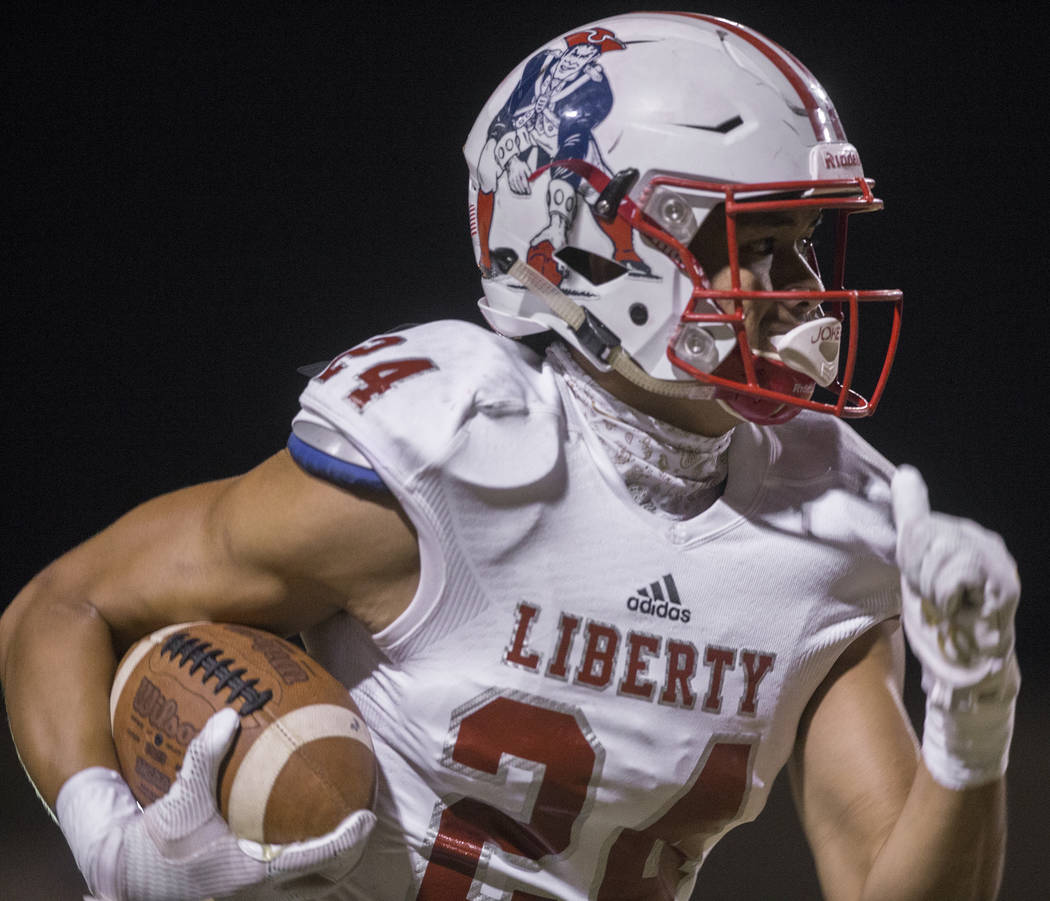 Liberty senior safety Lehi Ausage (24) returns an interception for a touchdown in the first quarter during the Patriots road game against the Chaparral Cowboys on Friday, Oct. 4, 2019, at Chaparral High School, in Las Vegas. (Benjamin Hager/Las Vegas Review-Journal) @benjaminhphoto 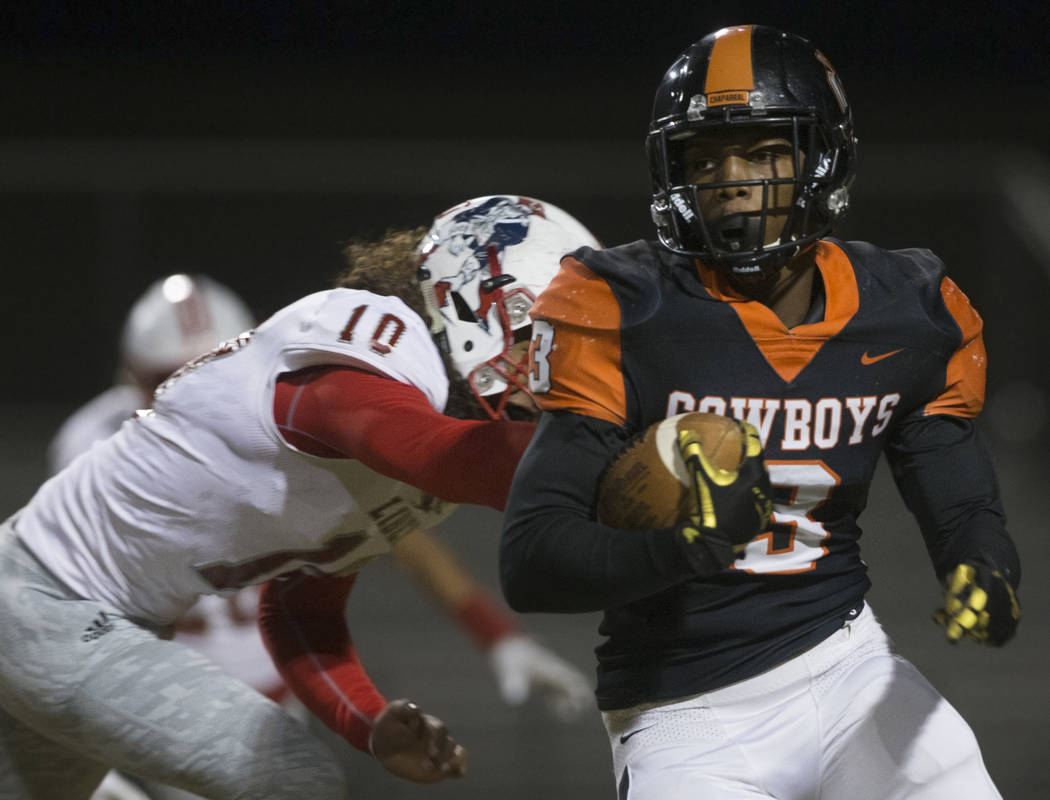 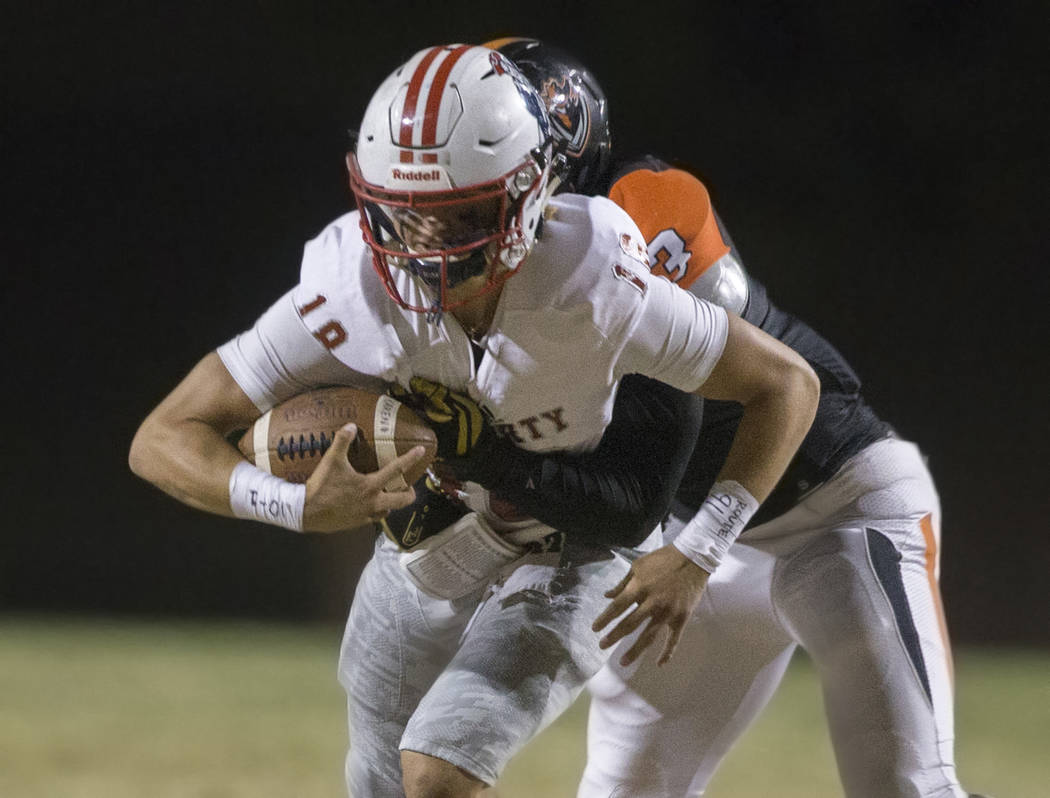 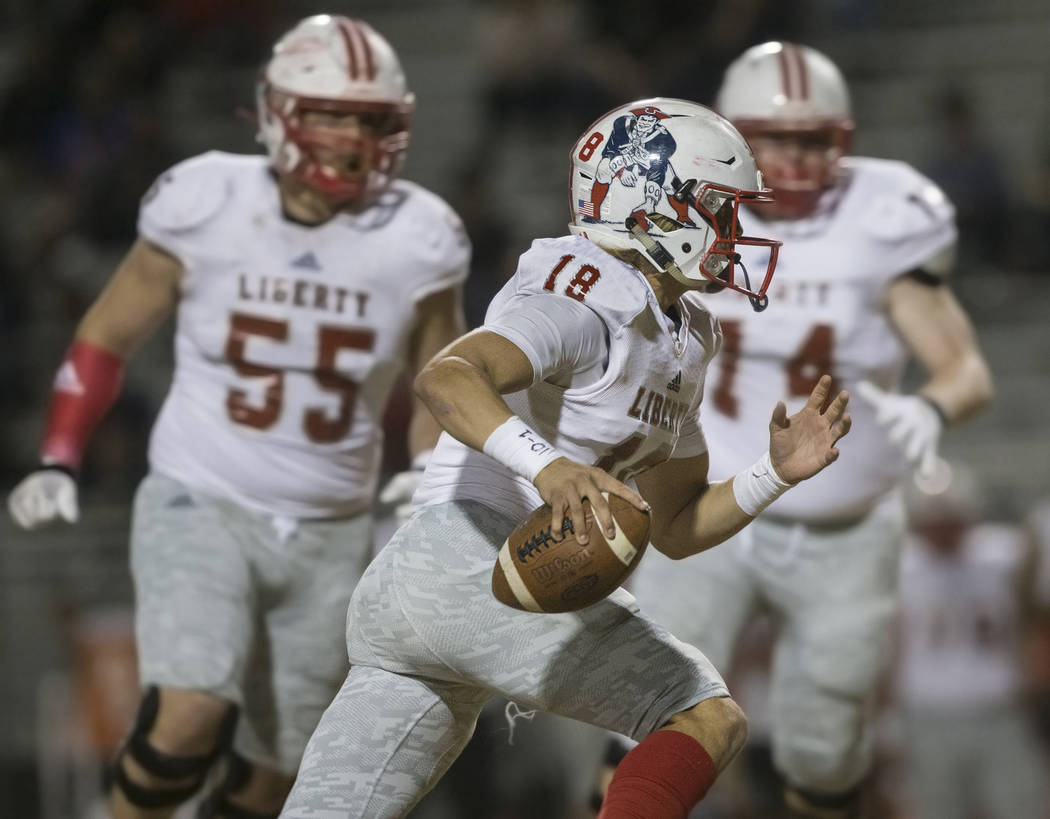 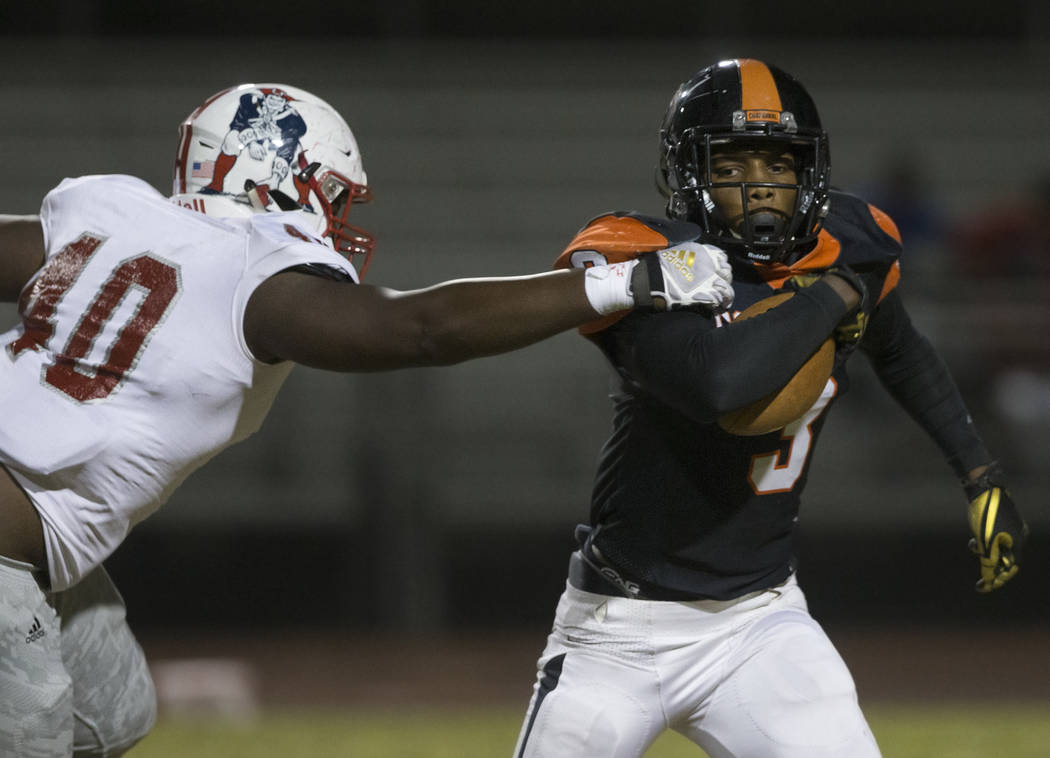 There was no doubt that Liberty’s football team was hungry for a victory Friday night.

After going winless in their five nonleague games, the visiting Patriots feasted on Southeast League foe Chaparral, scoring early and often en route to a 47-3 rout.

Zyrus Fiaseu rushed eight times — all in the first half — for 78 yards and two touchdowns to lead Liberty’s balanced attack.

“It feels great to get a win,” he said. “Obviously when you schedule such hard opponents at the beginning of the year, you’re hoping to learn how to battle against good teams. To come out here and have our way with an opponent was a nice change.”

The Patriots (1-5, 1-0 Southeast) needed just 11 plays to score their first 21 points. Quarterback Daniel Britt got his team on the board with a 17-yard scamper and a 22-yard sprint down the left sideline early in the first quarter to make it 14-0.

Zyrus Fiaseu followed with a 6-yard TD plunge up the middle to extend the lead to 21-0 later in the quarter.

The Cowboys (4-2, 0-1) committed numerous critical miscues, including an interception that was run back for a 25-yard TD by Lehi Ausage to make it 28-0 with 2:10 left in the first quarter.

“I liked our overall execution of plays,” Muraco said. “There were not many mental mistakes, which was good because on defense that’s been our Achilles’ heel this year.”

Though the Cowboys never found the end zone, they did break the shutout with 11:48 remaining in the second quarter on a 25-yard Dennis Perez field goal, made possible by a 75-yard pass from Nelson Jimenez to Al Caesar.

But the Patriots added touchdowns on a 43-yard pass from Britt to Germie Bernard and a 29-yard run up the middle by Fiaseu to go ahead 42-3 late in the half. A safety with 2:40 left made it 44-3 at halftime.

Muraco, who was able to unload his bench in the second half, said the lead allowed him to experiment with his roster.

“All these kids work hard year round,” said Muraco, who used four quarterbacks in the game. “It was nice to be able to get these guys in the game.”

The only score of the second half came on a 28-yard field goal by Dillon Fedor midway through the fourth quarter.

Bernard helped Liberty with three receptions for 68 yards, and Britt completed all six of his passes for 79 yards and a touchdown.

Jimenez completed 7 of 17 passes for 164 yards and two interceptions, but Chaparral was held to negative yardage on the ground.