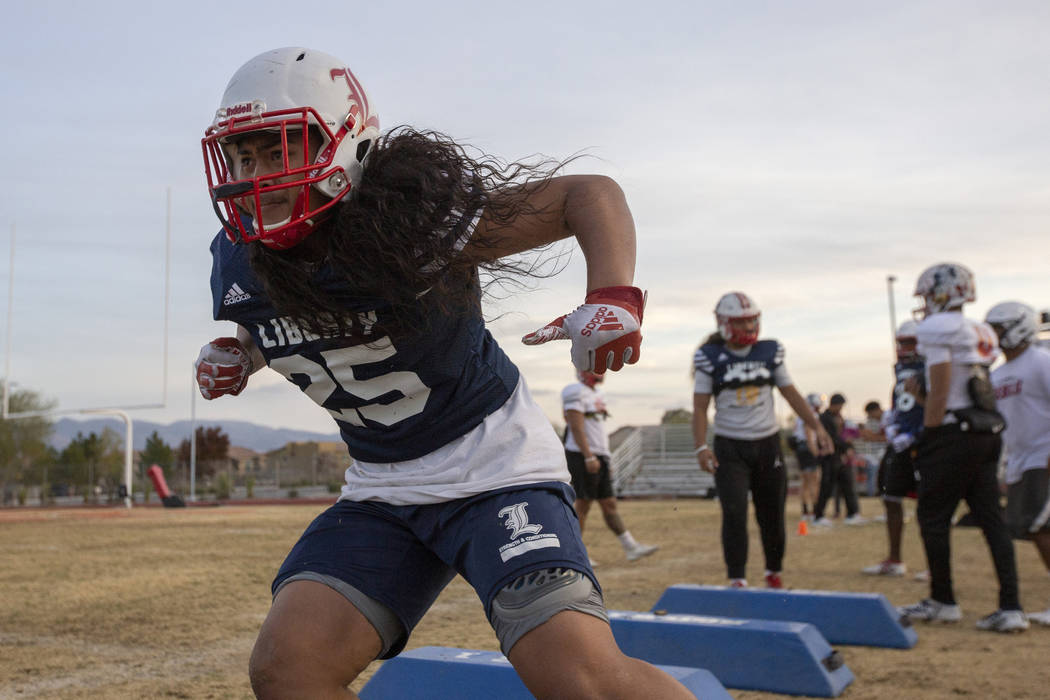 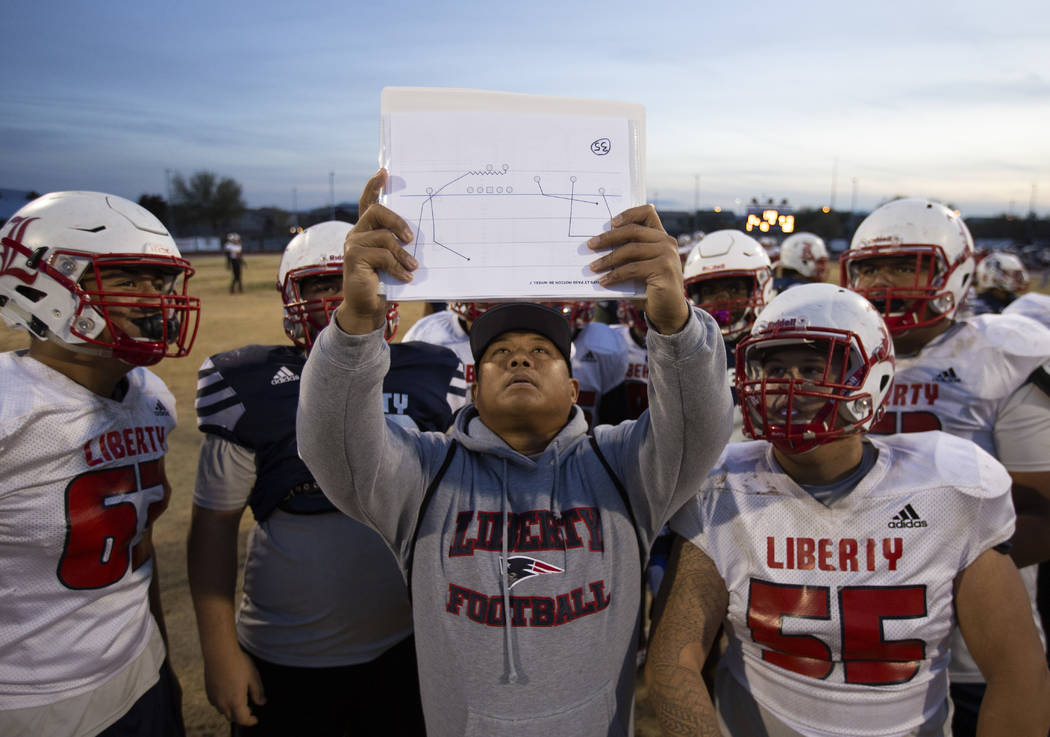 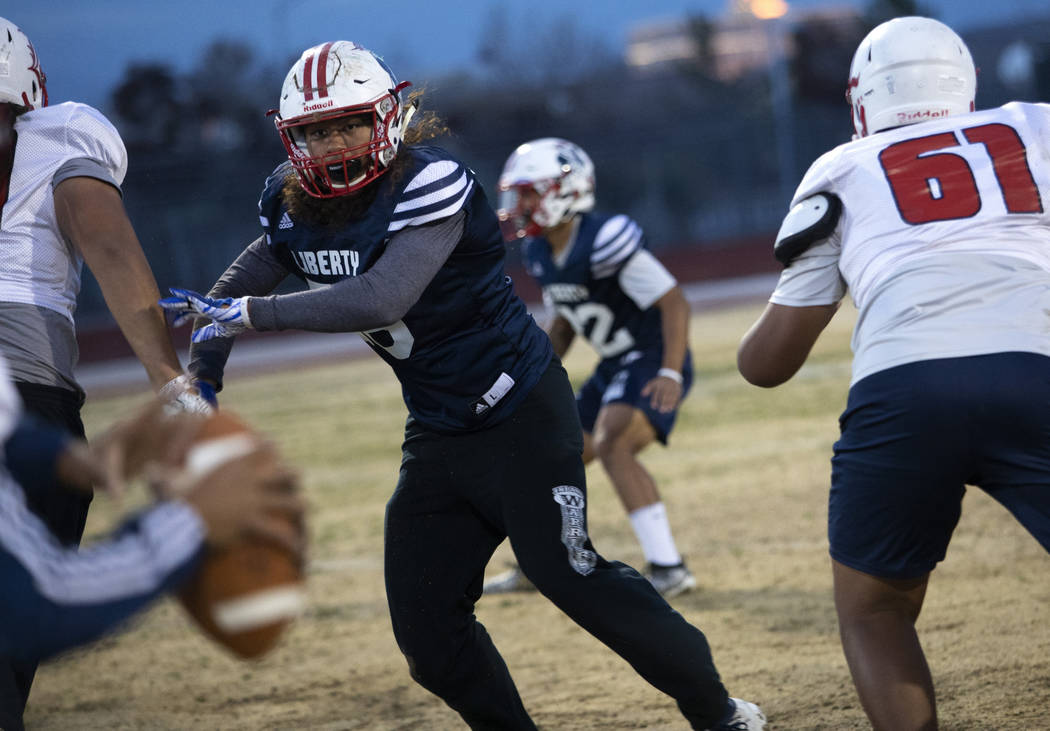 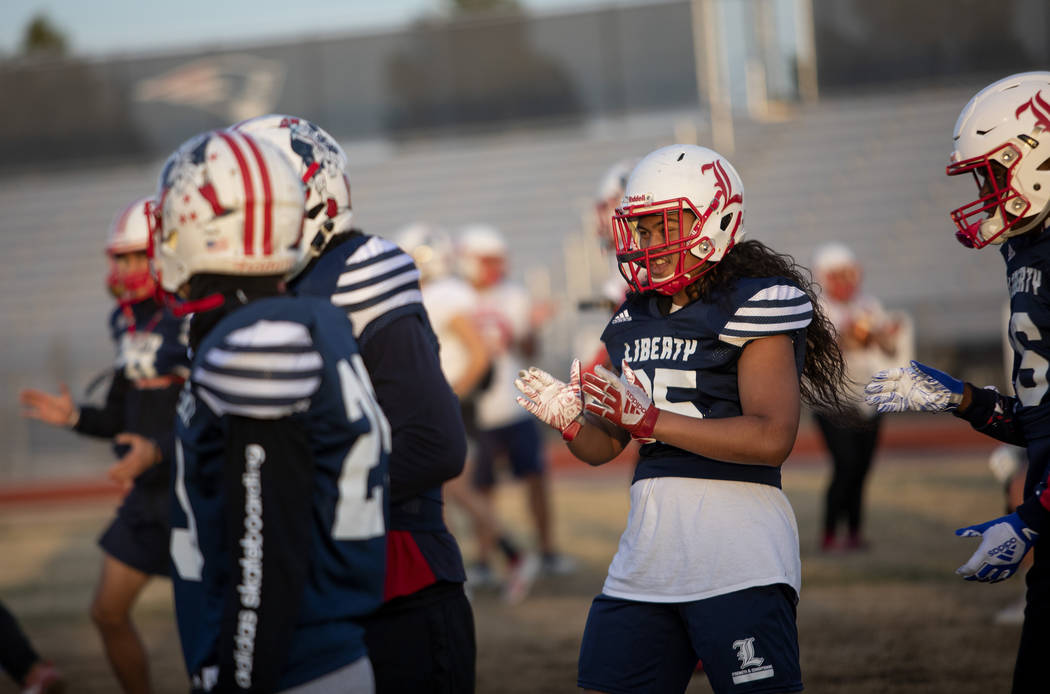 Liberty's inside linebacker Malachi Maika-Lepisi Asuega, right, claps as the team moves on from their warmups during football practice at Liberty High School on Thursday, Dec. 5, 2019, in Henderson. (Ellen Schmidt/Las Vegas Review-Journal) @ellenkschmidt_ 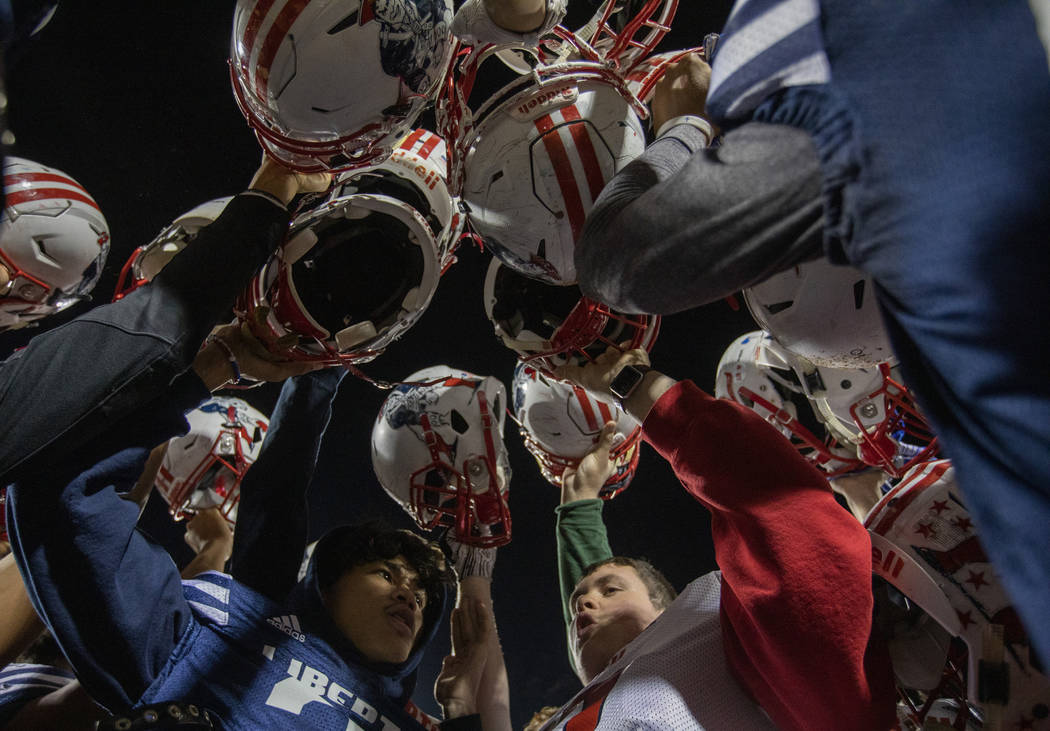 Senior members of the football team bring their helmets together at the end of practice at Liberty High School on Thursday, Dec. 5, 2019, in Henderson. (Ellen Schmidt/Las Vegas Review-Journal) @ellenkschmidt_

Rich Muraco doesn’t need to see the opening kickoff to get the first indication of how his Liberty football team will play that night.

That comes minutes before each game when the Patriots do the haka, a ceremonial Polynesian dance accompanied by rhythmic chanting.

“If we bring the right kind of energy and everybody’s focused in and we look sharp, that usually translates onto the field that we’re going to play well,” Muraco said.

Liberty has become a landing spot for many families of Polynesian descent over the past decade, and the haka is a celebration of that. The importance of family is a staple in the Polynesian culture, and Muraco said that, along with other values such as respecting elders and knowing one’s role, has helped Liberty become one of Nevada’s top programs.

“Me being one that has had the opportunity to lead the haka, you feel it deep inside from all the generations before you,” senior captain Toa Tai said. “It was a war chant, and they would do it before war to let them know we’re ready and we’re coming. You can feel the other team listening, and they know we’re ready.”

The Patriots have been ready the past nine weeks. After losing its first five games against out-of-state competition, Liberty (9-5) turned its season around and will meet Centennial (12-1) for the Class 4A state championship at 12:10 p.m. Saturday at Sam Boyd Stadium. It’s the fourth time Liberty has reached the title game, but it’s still looking for its first crown.

Tai, along with several others at Liberty, are playing for those who came before them — Tai’s brothers Sam and Teu, Zyrus Fiaseu’s brother Austin, London Toomalatai’s brothers Tyus and Luke, and a host of others who have had family members come through the program.

“It’s like a pass-down.” London Toomalatai said. “The things they built, I feel it all led up to this year. Most of us are from around here, and it’s like a brotherhood at this school.”

Sam Tai was a junior when Liberty made its first playoff appearance 10 years ago, and he helped lead the Patriots to their first of eight straight regional championships a year later.

But there always had been a brick wall in the Patriots’ way. That was Bishop Gorman, which won 10 straight state championships before having that streak ended by Liberty in a 30-24 overtime thriller two weeks ago. Zyrus Fiaseu had the winning 7-yard touchdown run that ignited a wild celebration.

“My brother at UNLV talks to me all the time about how he wishes it could have been him,” Fiaseu said. “All the alumni have a special place in their heart for Liberty, so we’re doing it for them.”

Muraco said the family atmosphere at Liberty isn’t unique. Every coach wants that. He also doesn’t like the notion that Liberty is seen as exclusively a Polynesian team.

“I think some people think we are, and they feel like they don’t want to go to Liberty because we’re not going to accept them or their culture,” Muraco said. “That’s not what we’re about. We include everybody.”

Family bonds are tested in times of adversity, and the Patriots had plenty in the past two weeks.

They trailed Gorman by 14 at halftime, but came back to end the Gaels’ 115-game winning streak against in-state teams. They fell behind by 10 in last week’s state semifinals, but scored 28 consecutive points to win 42-24 at Bishop Manogue.

“We were in the basketball gym the other day doing a walk-through because it was muddy,” Toa Tai said. “We’re looking up at those state banners, and we’re missing a football one.”