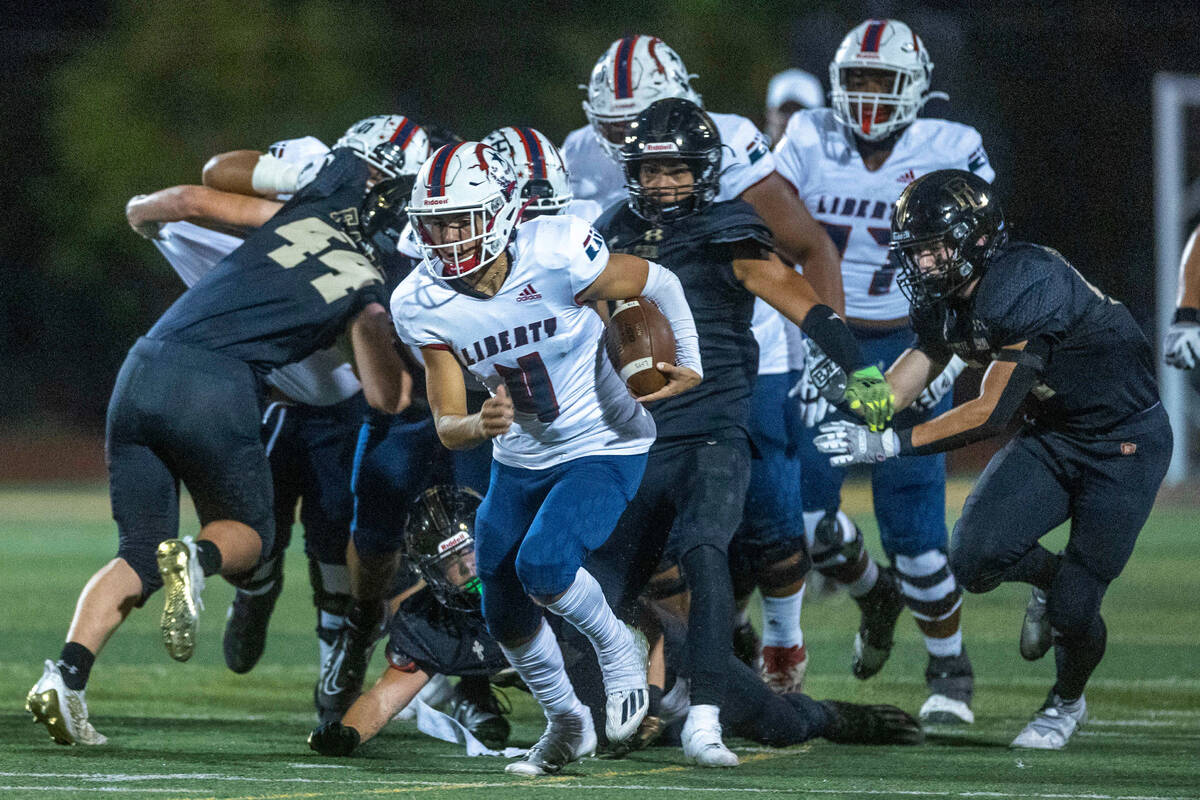 Liberty quarterback Colin Gregorio (4) breaks into the open for a long run versus the Faith Lutheran defense during the first half of their NIAA football game on Friday, Sept. 23, 2022, in Las Vegas. (L.E. Baskow/Las Vegas Review-Journal) @Left_Eye_Images 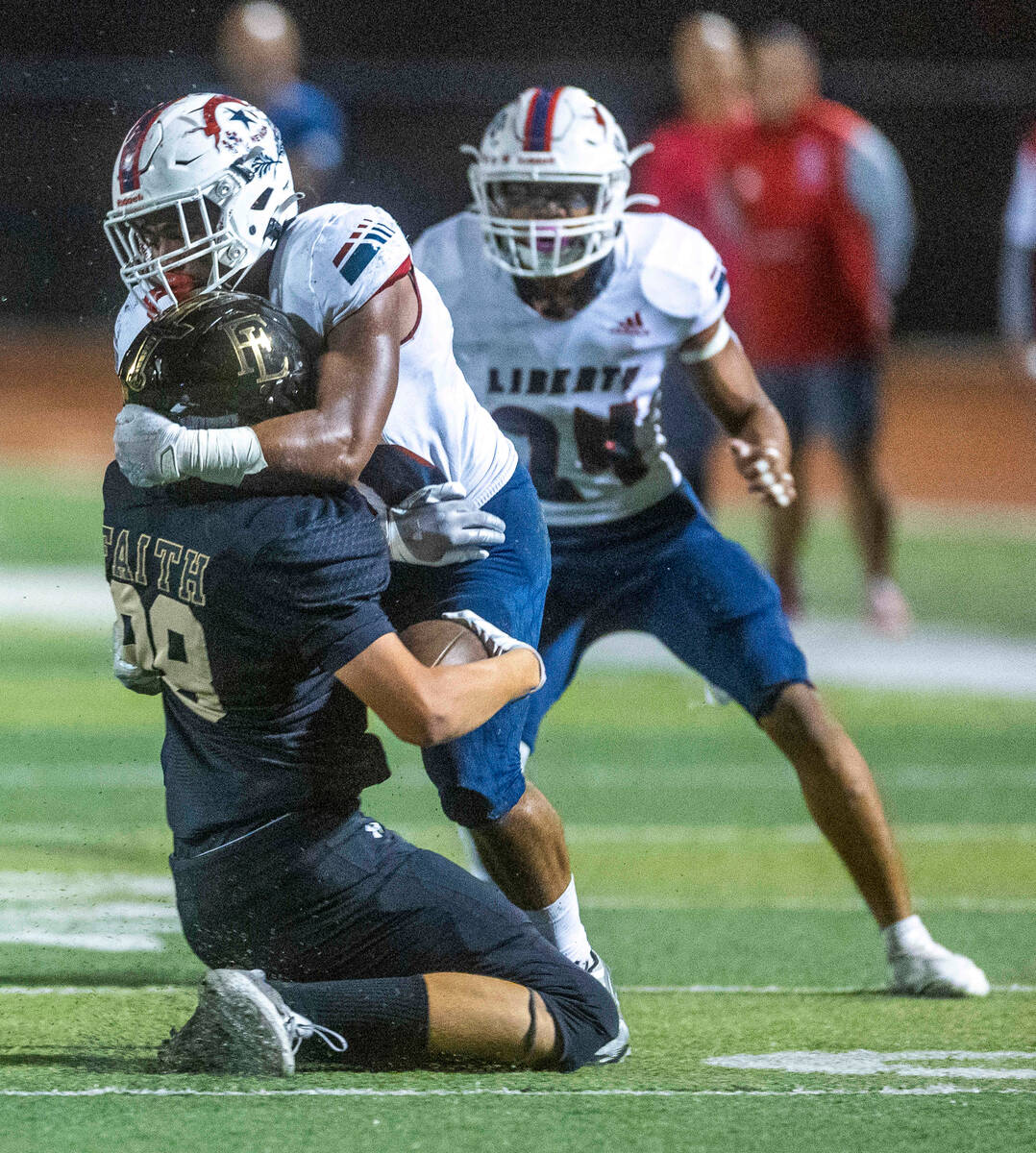 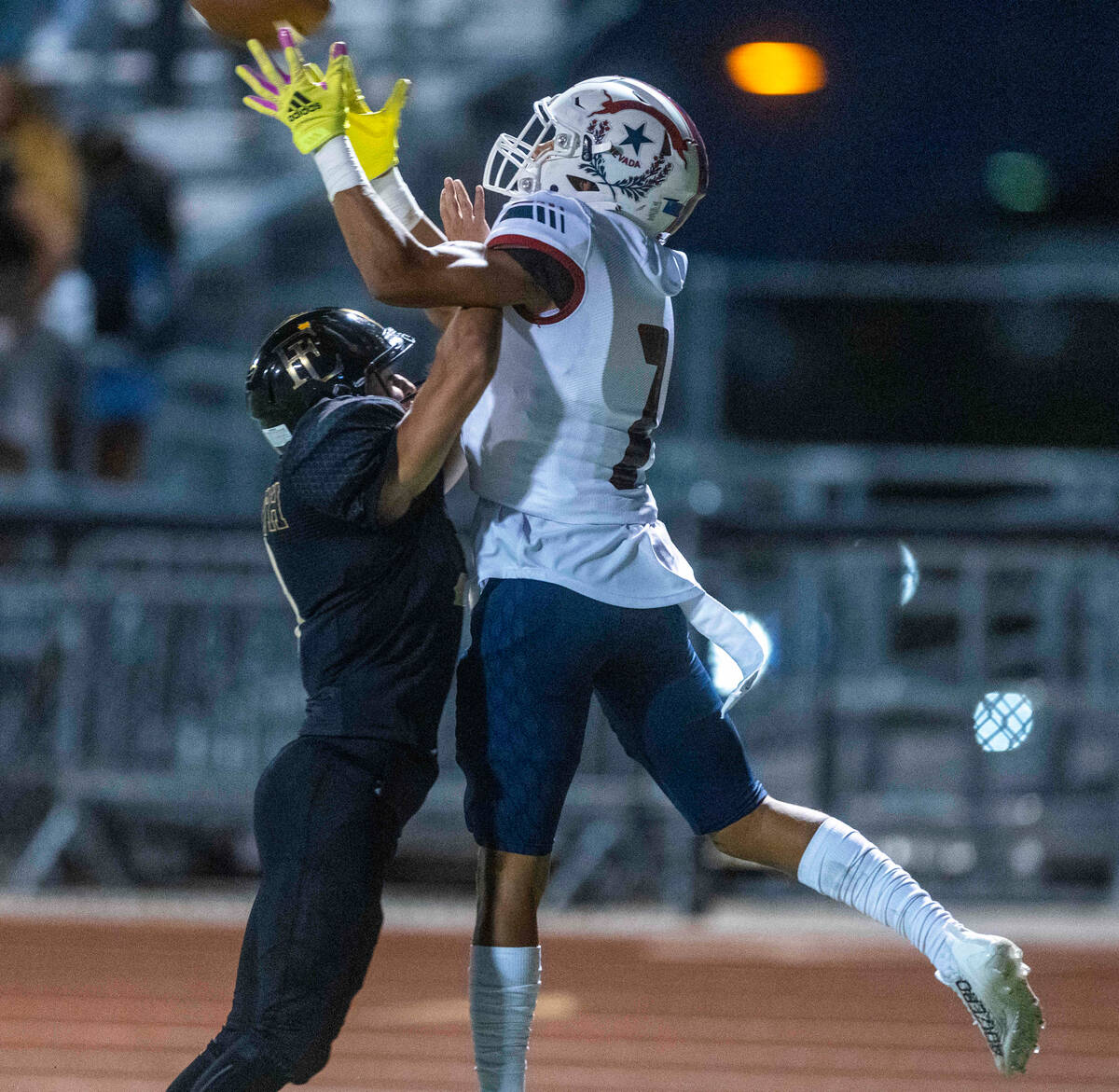 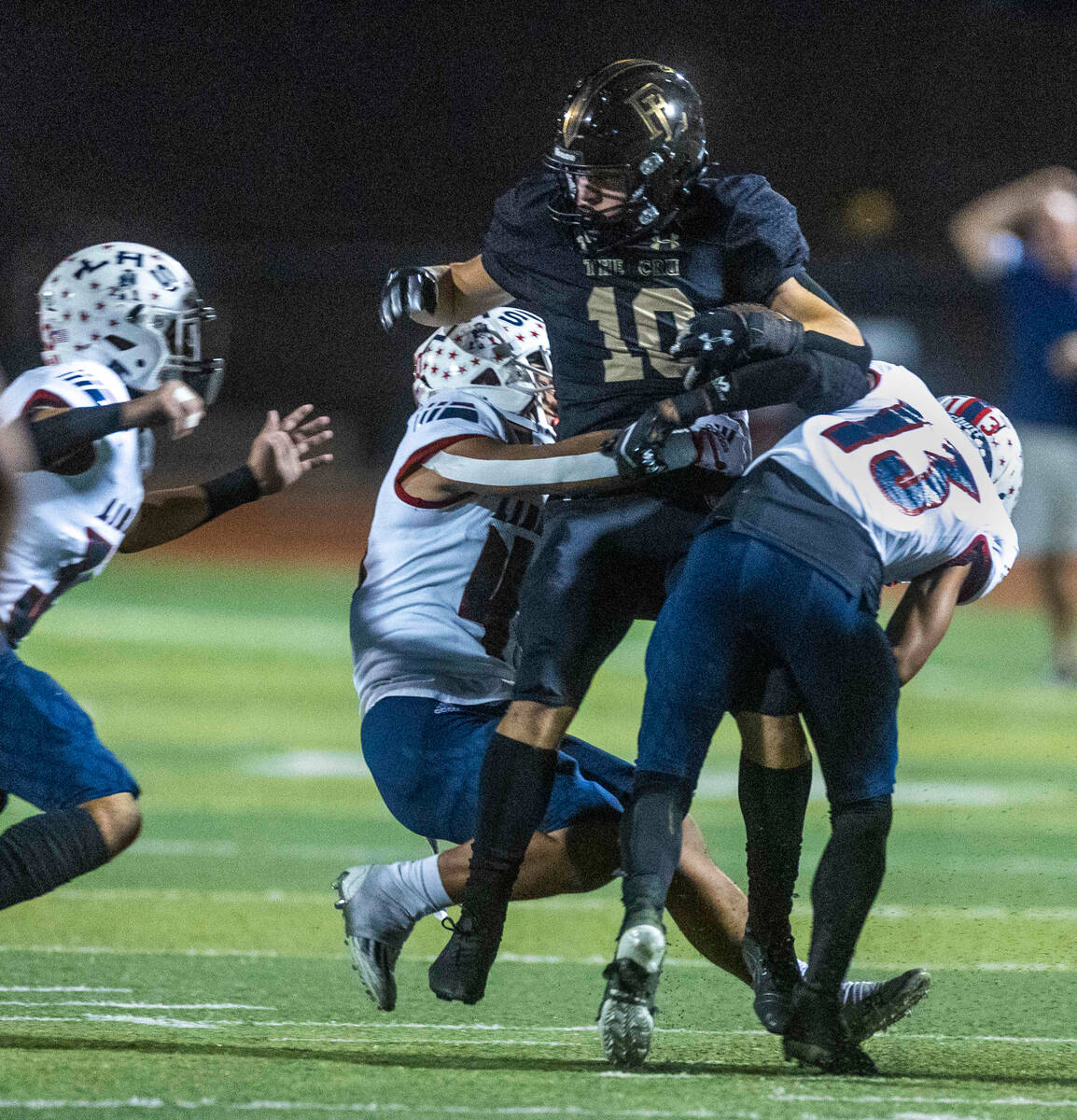 Faith Lutheran's wide receiver Peyton Steigerwald (10) is taken down by Liberty defenders including cornerback Rayshaun Manker (13) after a reception during the first half of their NIAA football game on Friday, Sept. 23, 2022, in Las Vegas. (L.E. Baskow/Las Vegas Review-Journal) @Left_Eye_Images 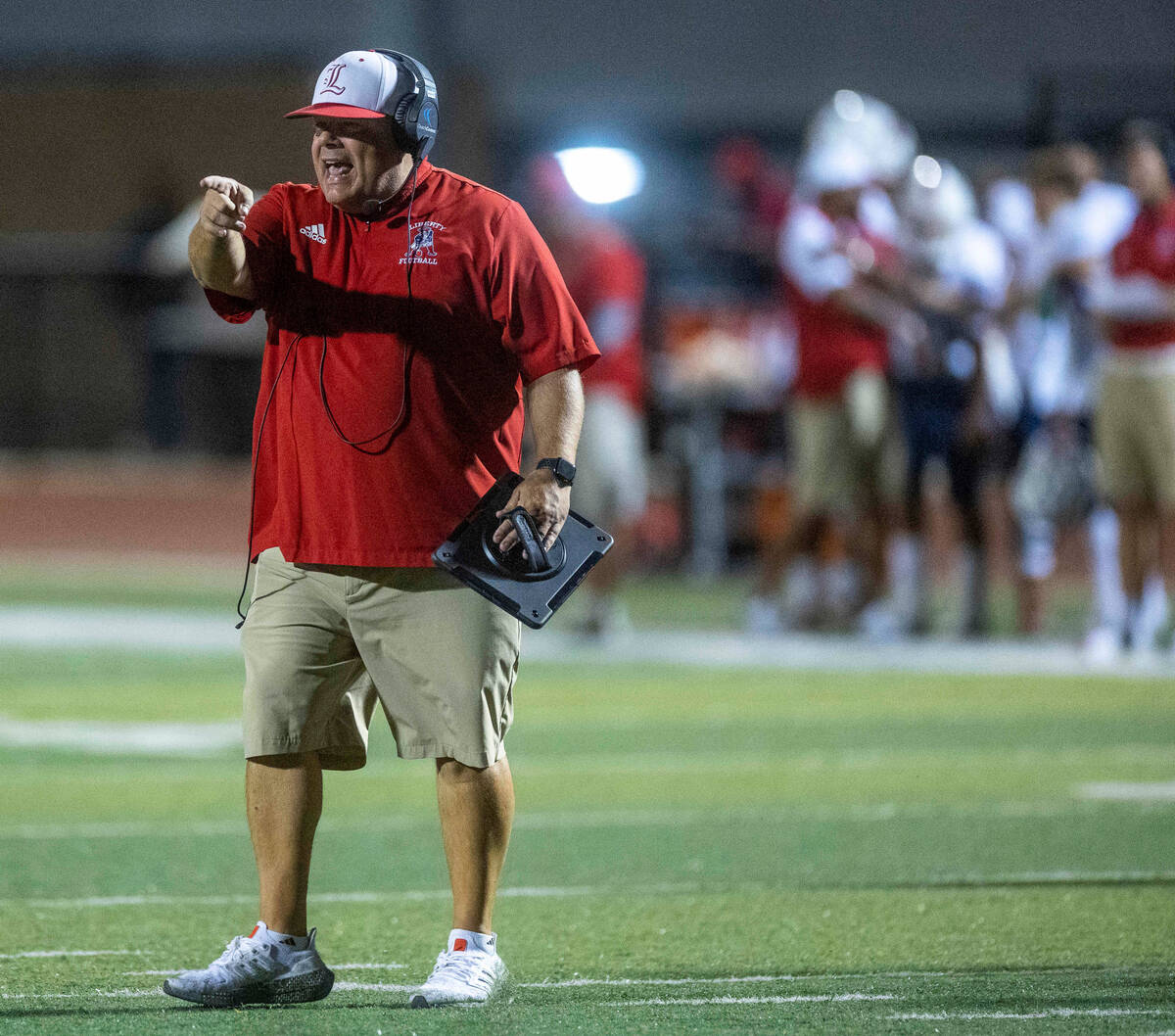 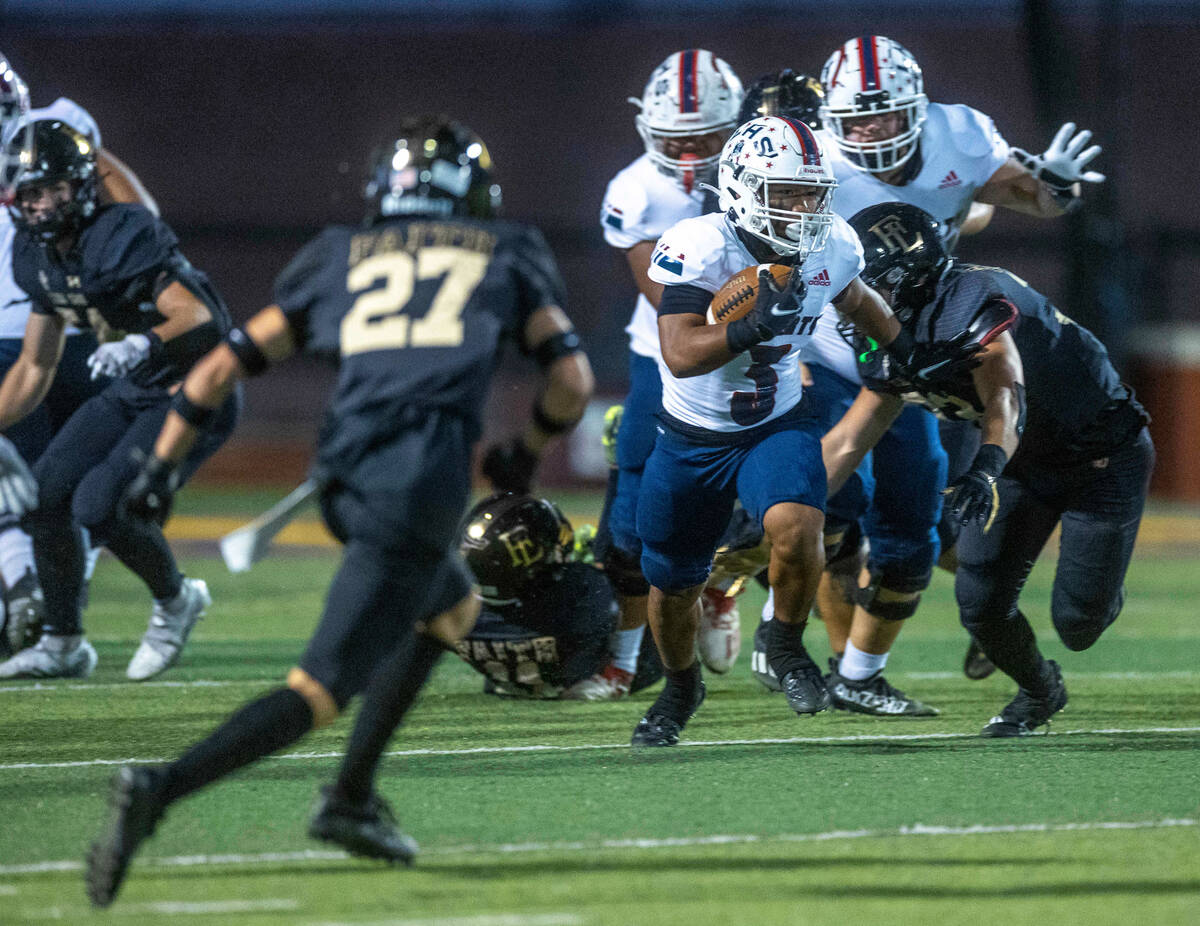 Liberty's running back Isaiah Lauofo (3) breaks free on the Faith Lutheran defense during the first half of their NIAA football game on Friday, Sept. 23, 2022, in Las Vegas. (L.E. Baskow/Las Vegas Review-Journal) @Left_Eye_Images 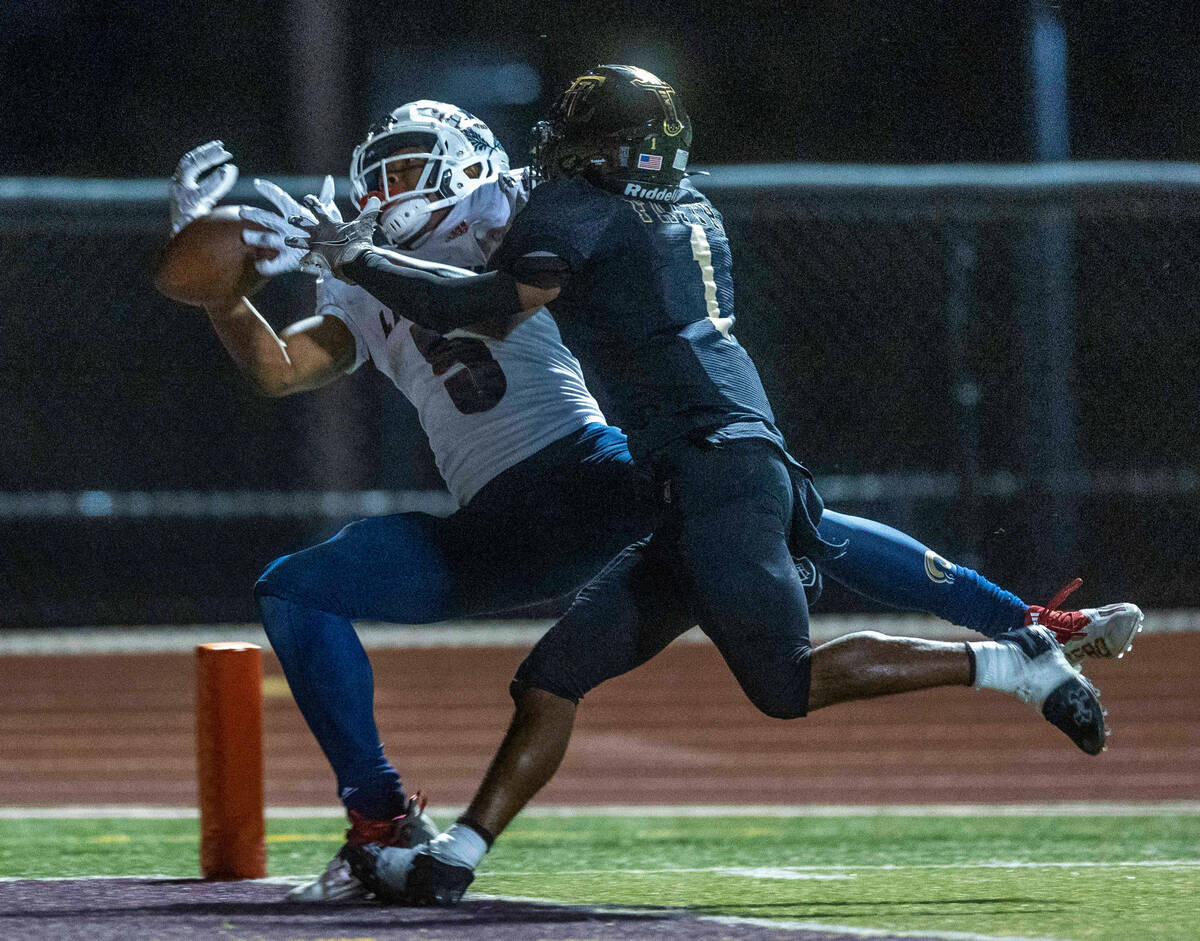 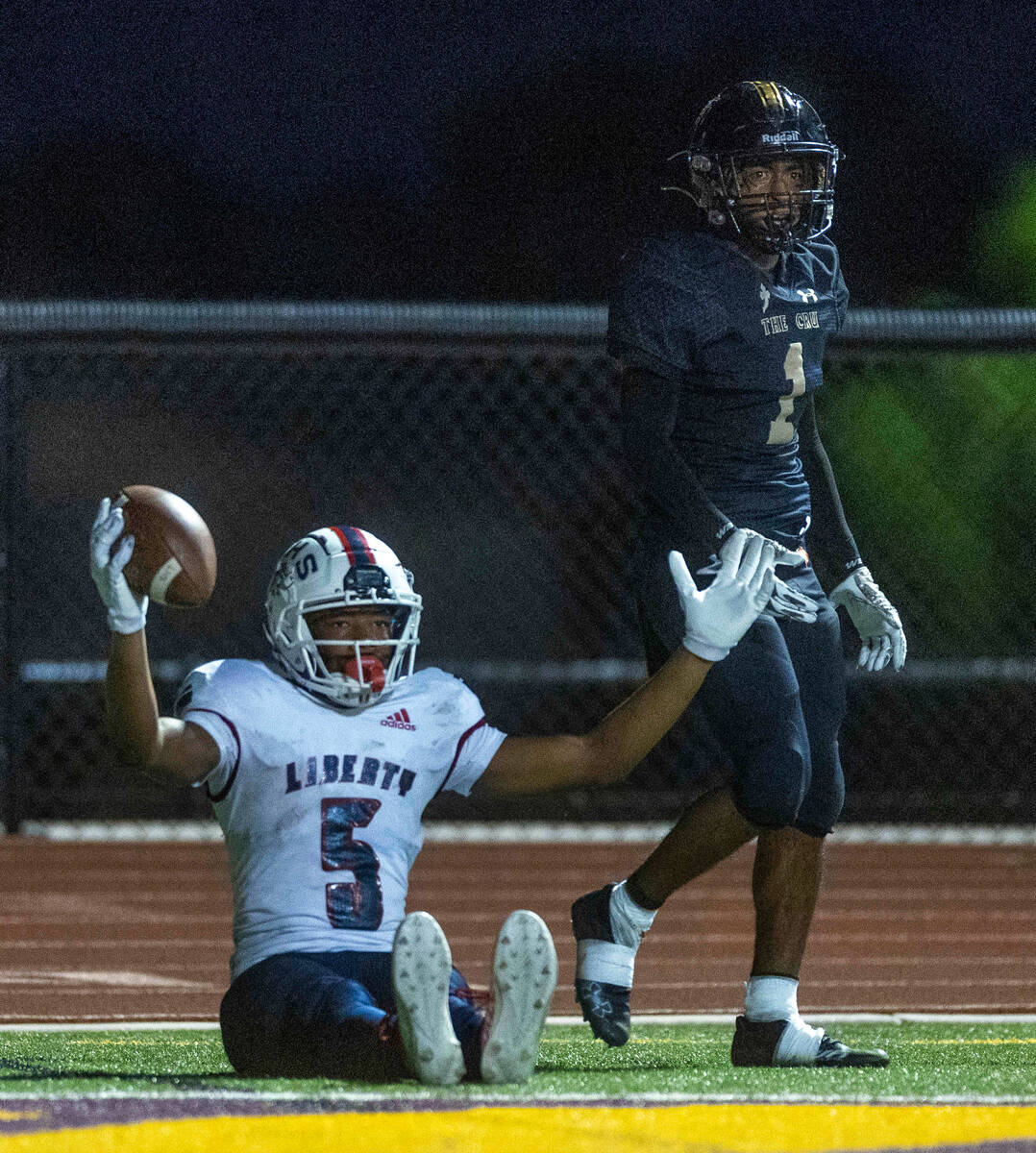 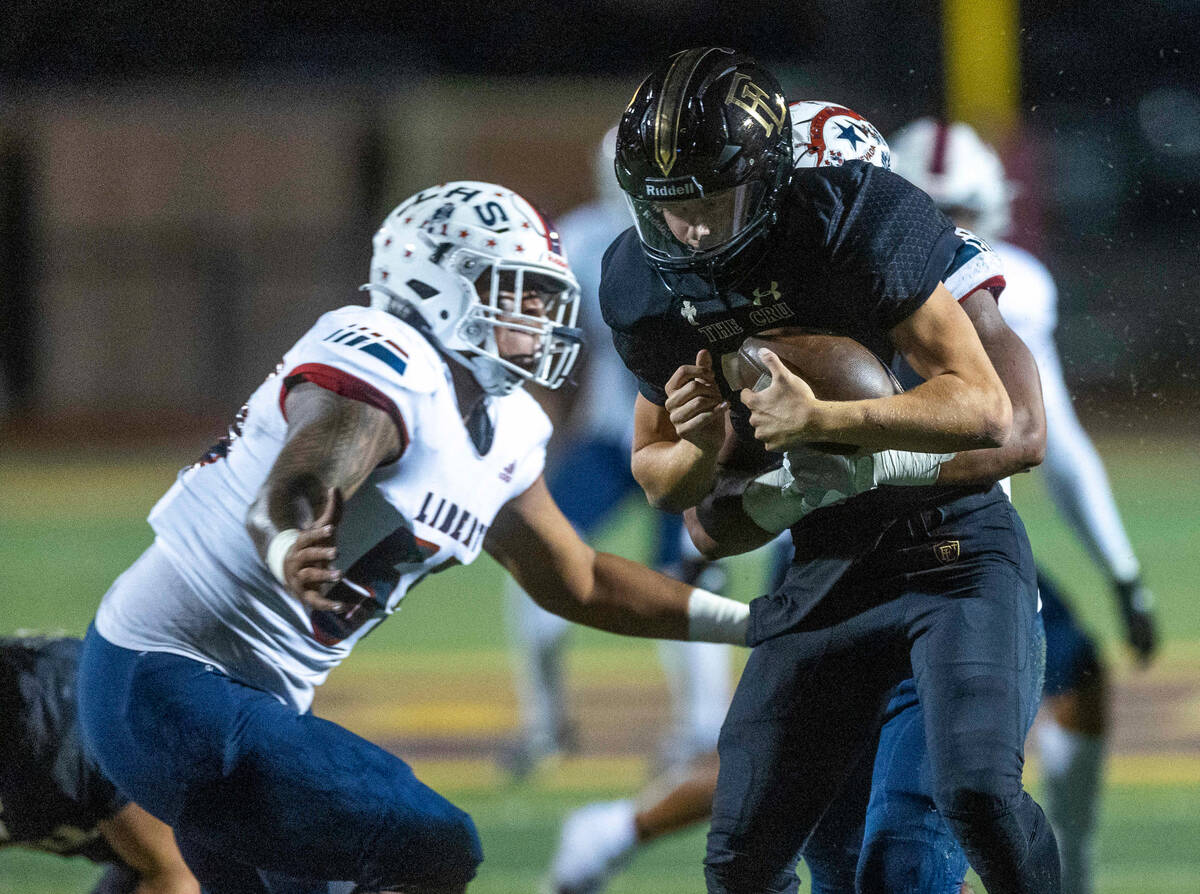 Faith Lutheran's quarterback Rylan Walter (13) is sacked by the Liberty defense including defensive tackle Aj Fuimaono (55) during the first half of their NIAA football game on Friday, Sept. 23, 2022, in Las Vegas. (L.E. Baskow/Las Vegas Review-Journal) @Left_Eye_Images 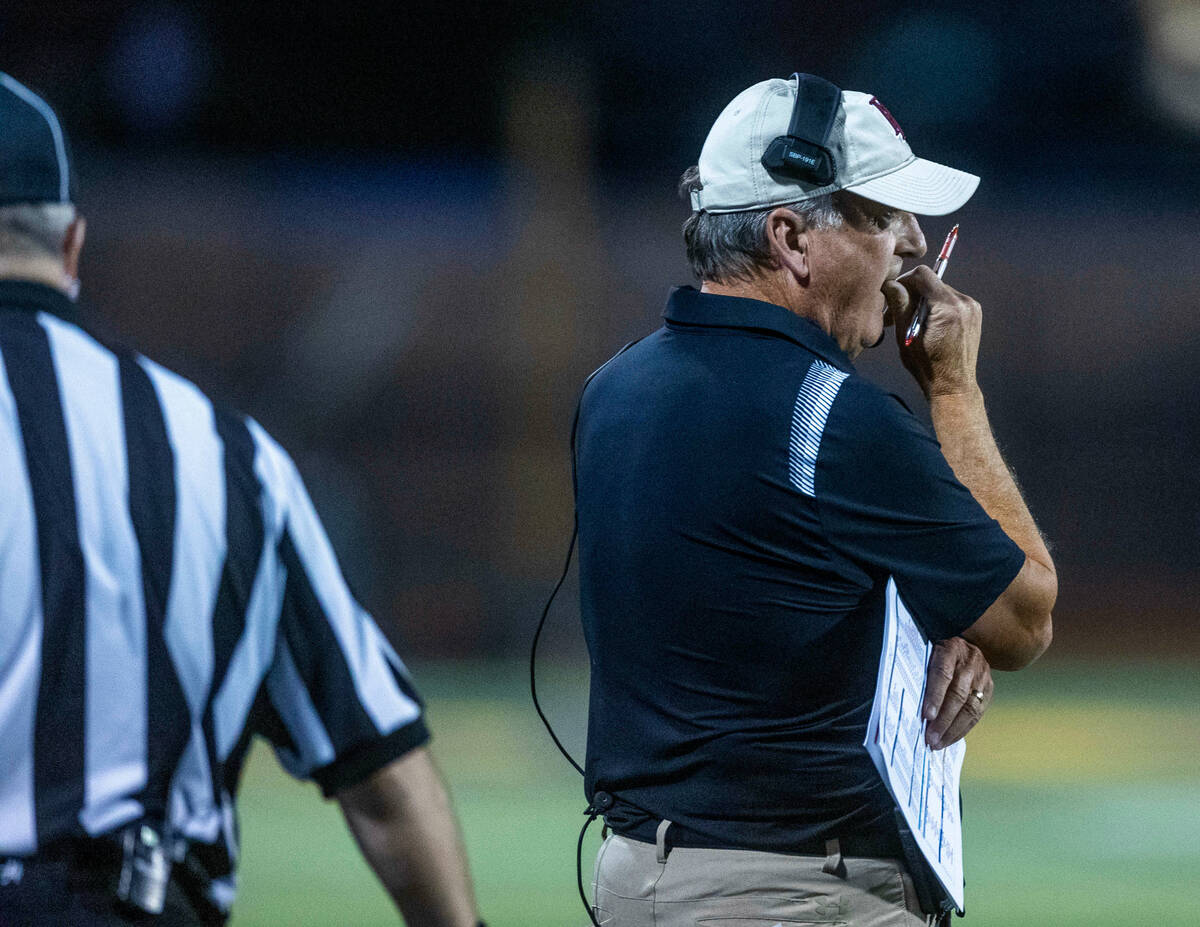 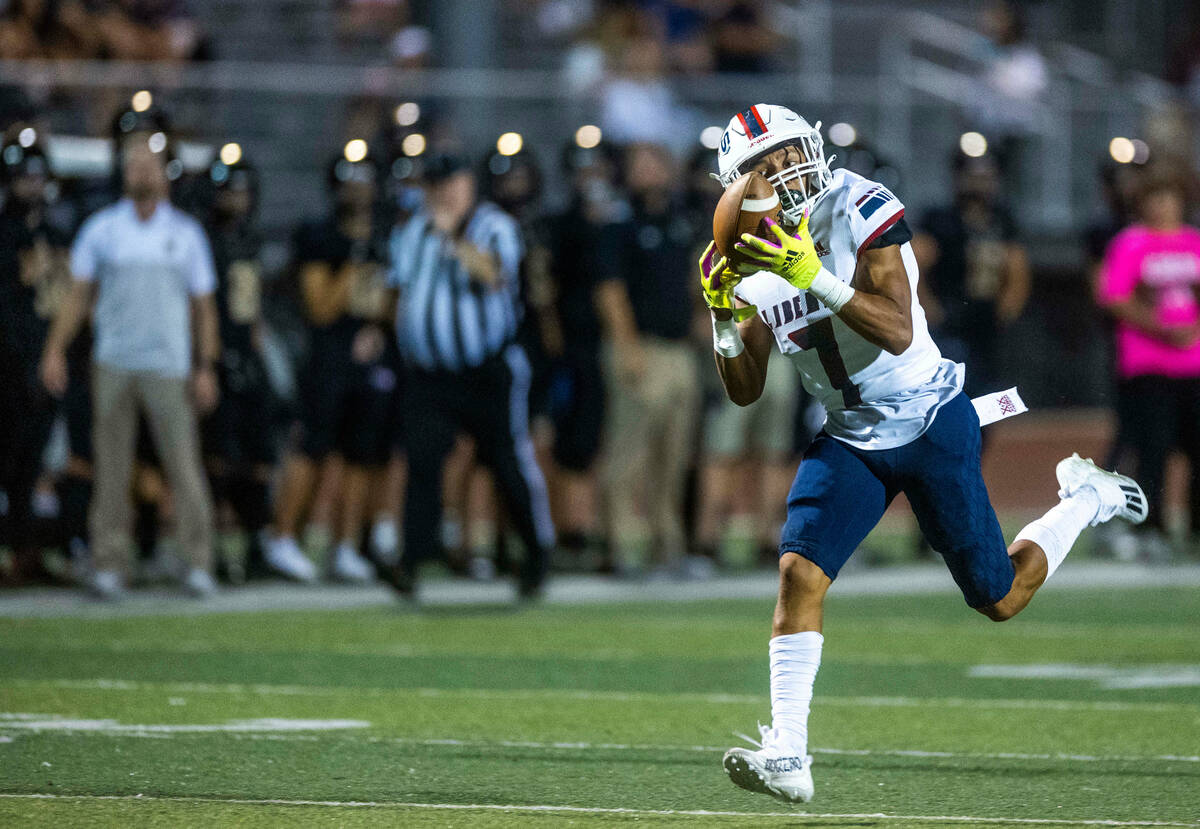 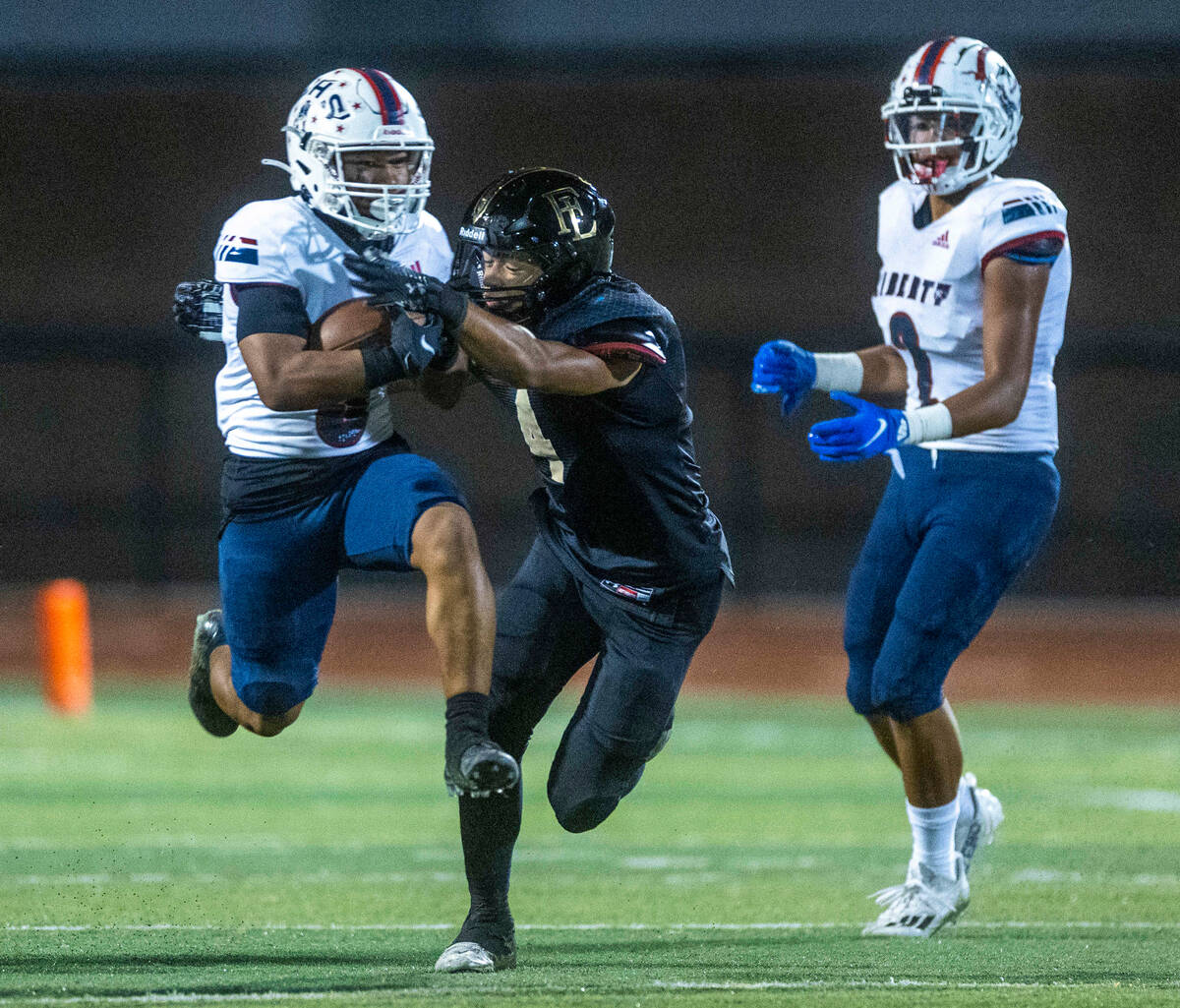 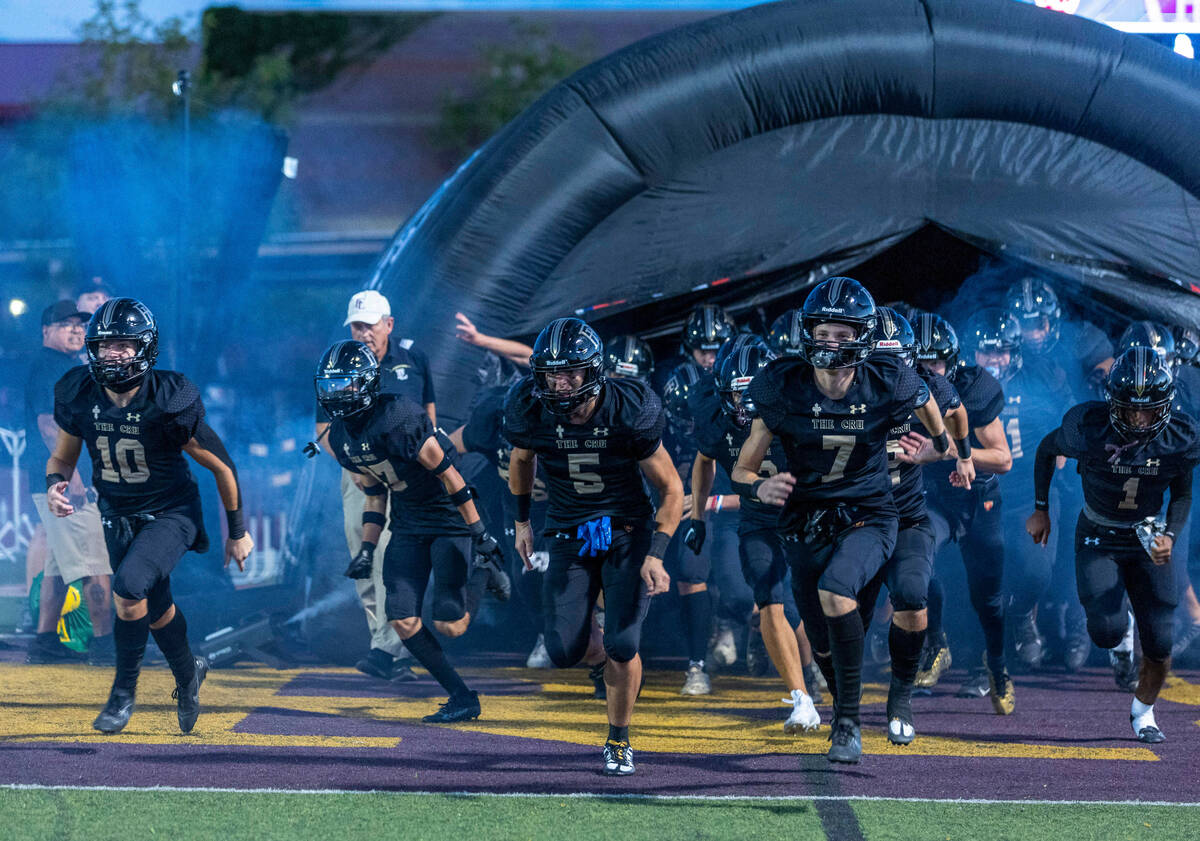 Faith Lutheran players take the field versus Liberty for the first half of their NIAA football game on Friday, Sept. 23, 2022, in Las Vegas. (L.E. Baskow/Las Vegas Review-Journal) @Left_Eye_Images 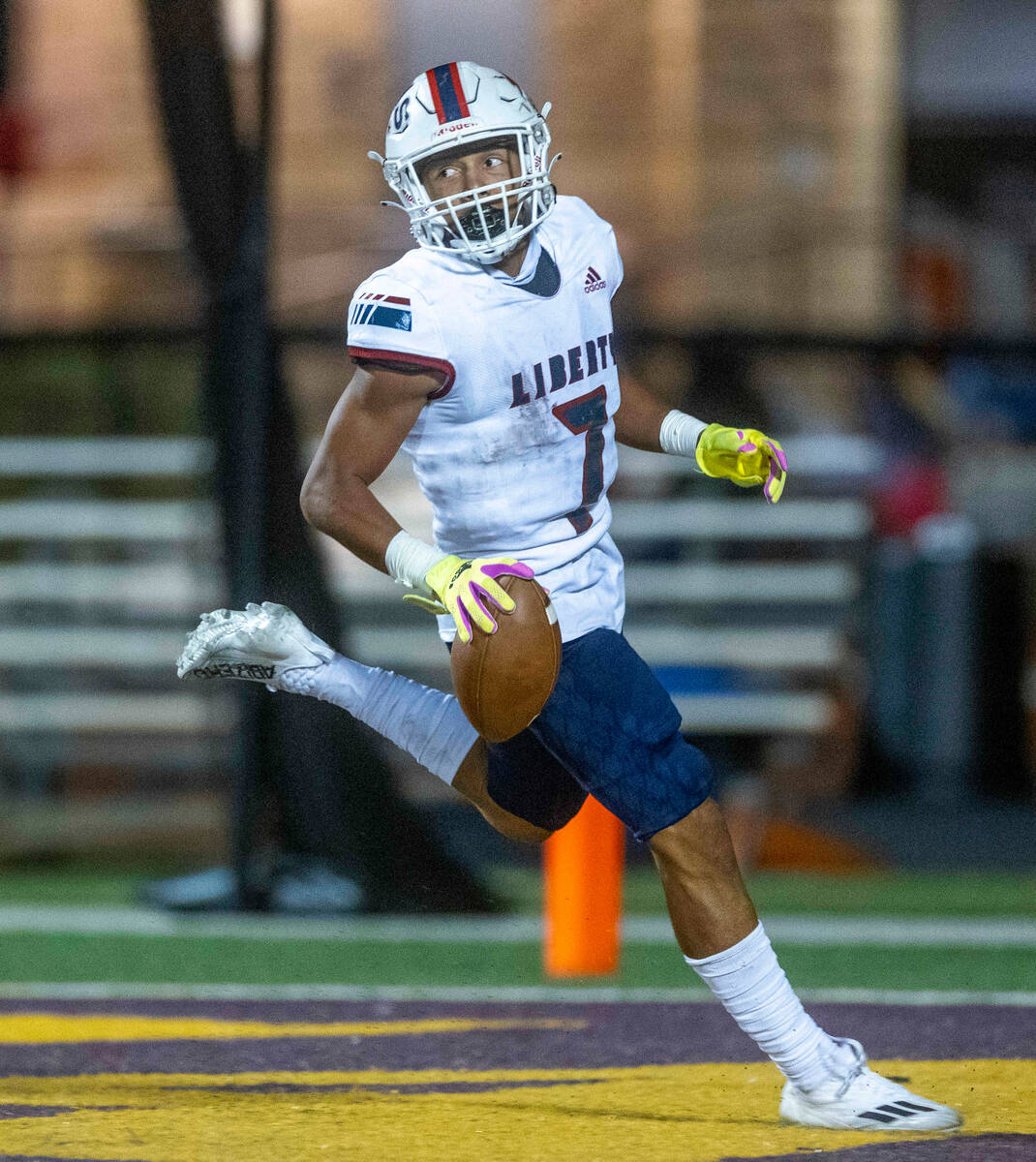 Liberty wide receiver Jayden Robertson (7) looks looks back on another touchdown reception over Faith Lutheran during the first half of their NIAA football game on Friday, Sept. 23, 2022, in Las Vegas. (L.E. Baskow/Las Vegas Review-Journal) @Left_Eye_Images 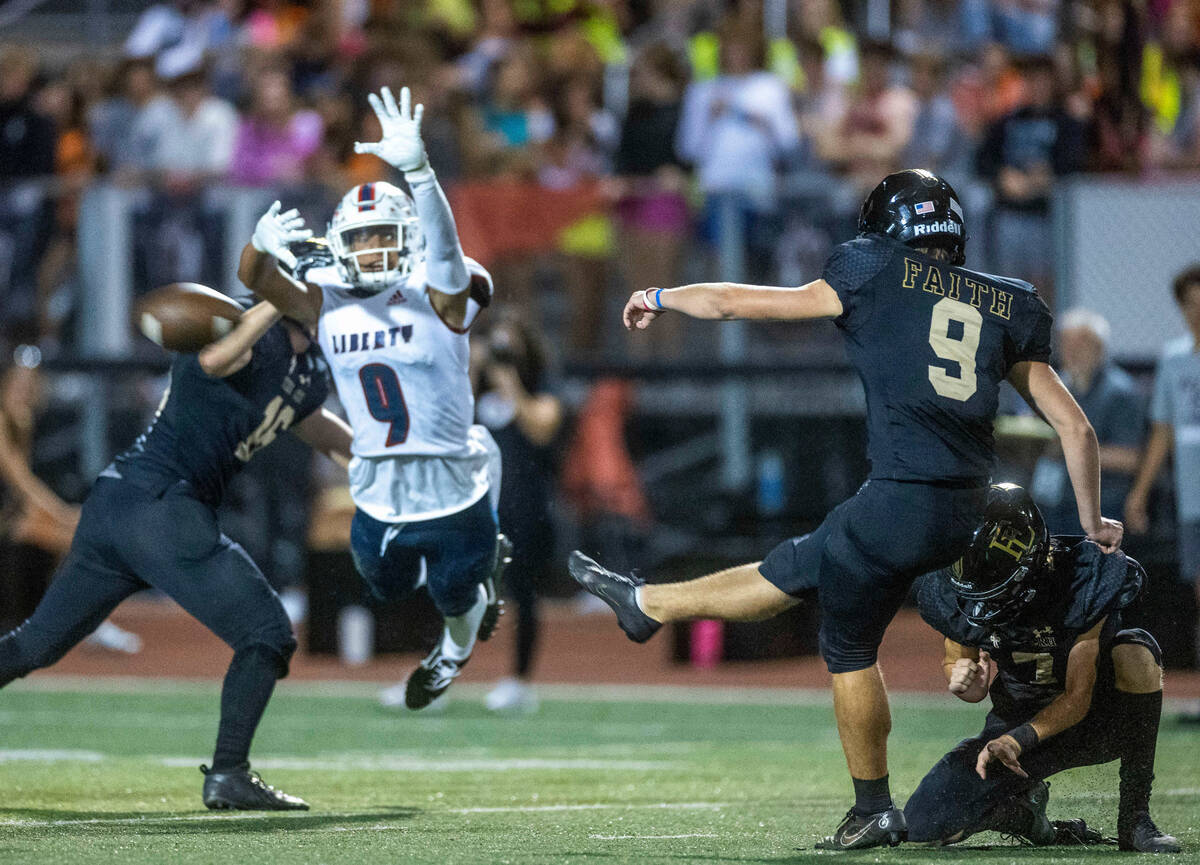 Faith Lutheran came into Friday’s Class 5A Mountain League opener against Liberty with an undefeated record.

But it only took the visiting Patriots one play to show that they still are the team to beat in the league.

Isaiah Lauofo took a handoff on the first play from scrimmage and sprinted 80 yards for a touchdown, and Liberty rolled to a 41-6 win.

“We turned up after that,” Liberty receiver Jayden Robertson said. “That’s what we needed. Then the next drive I had my catch and it turned up even more and just kept going from there.”

Lauofo ran through a couple of leg tackles near the line of scrimmage, then sprinted away from the Crusaders’ defense to score 18 seconds into the game.

The next time the Patriots (3-3, 1-0) had the ball, it took them two plays, with Robertson making a leaping catch over a Faith Lutheran defender to complete a 39-yard TD pass from Colin Gregorio.

“That was the plan. We wanted to strike fast and show them that we’re still the top dog in our division,” Liberty coach Rich Muraco said. “We were hoping that we could take some of the wind out of their sails.”

Robertson had only three catches, but all three went for touchdowns. He finished with 161 receiving yards. Robertson hauled in a 57-yard touchdown pass from Tyrese Smith to make it 20-0 with 3:42 to go in the first quarter. Robertson got behind the defense again just before the half, catching a 65-yard TD toss from Smith that made it 35-0 with 1:45 left in the half.

“It felt great, because my last game I didn’t do too well,” Robertson said. “Last game I dropped like two passes that were really important. Stepping up for this game just felt so good. It just always feels good to score touchdowns.”

Gregorio took most of the snaps, but Smith played a big role, too. He had three pass attempts in the first half, all going for touchdowns.

“He played a great game,” Muraco said of Robertson. “I told him, ‘Man, I need you to step up and let’s see the playmaker that you are.’ And he didn’t disappoint tonight.”