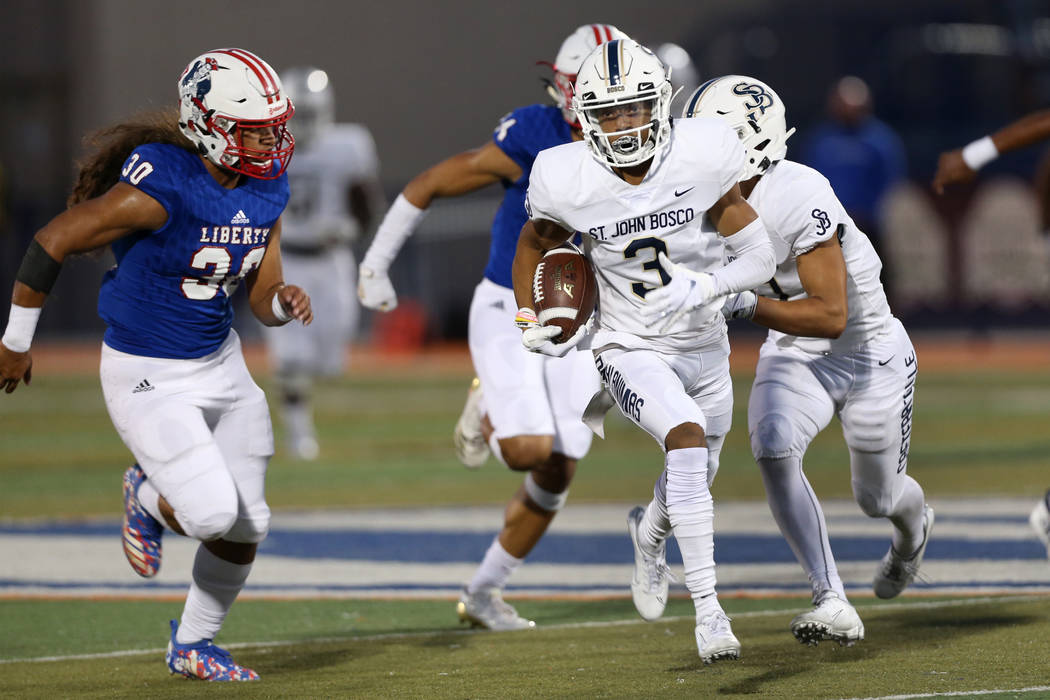 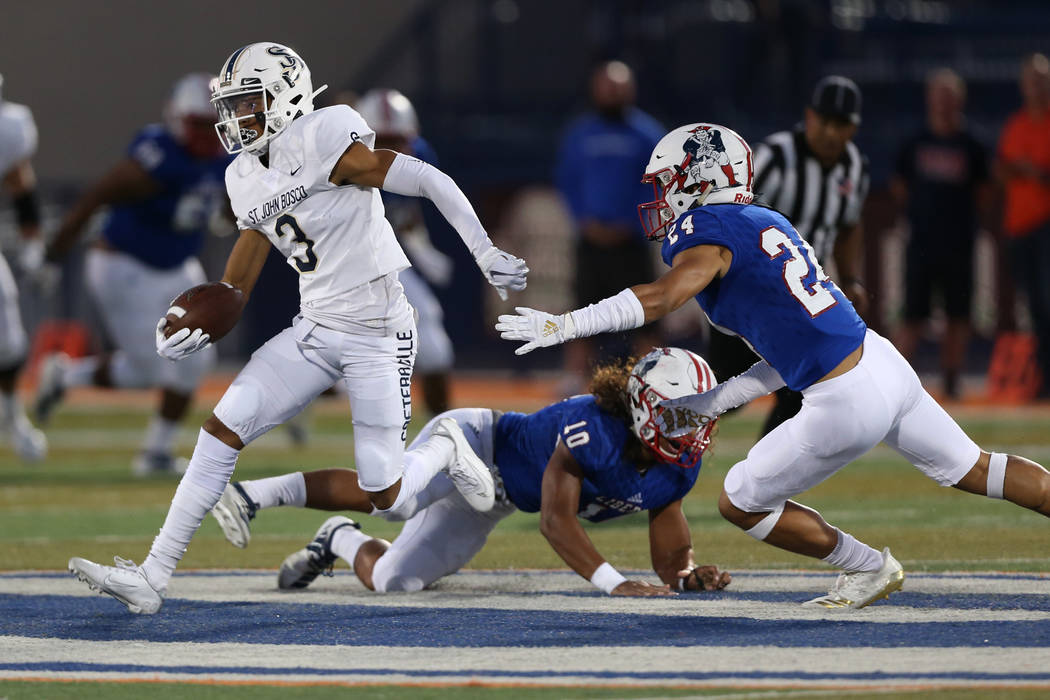 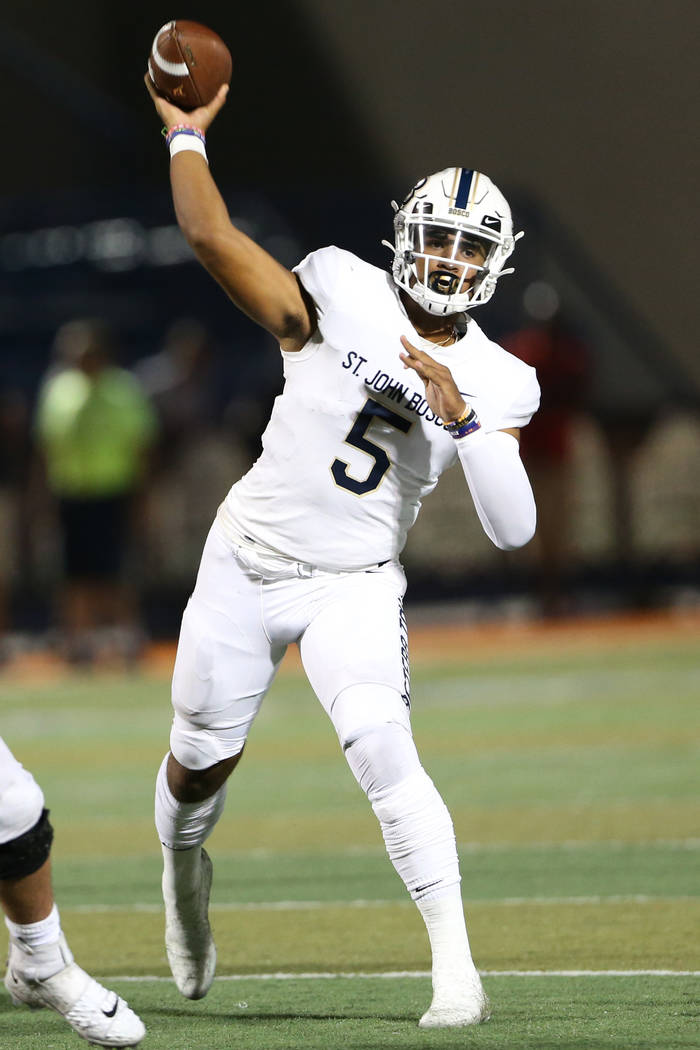 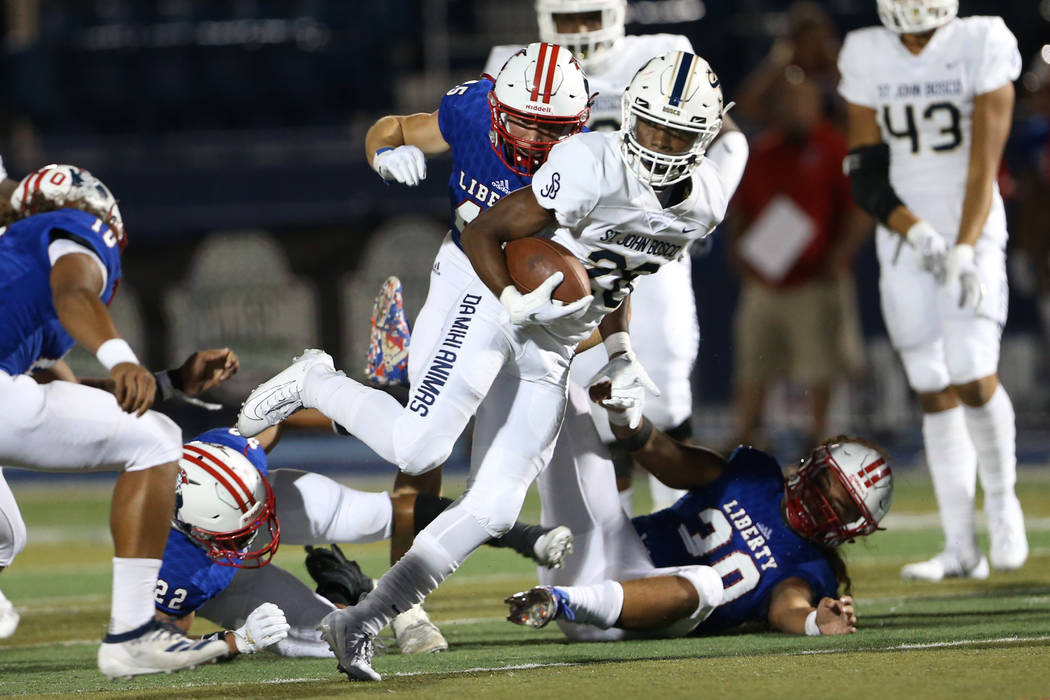 There are different schools of thought regarding early-season scheduling.

Some teams are concerned about protecting their record and try to find games they can win. Others want to have a mix of winnable games to build confidence while also challenging their teams. Then there are those who will play anybody and go anywhere to do it.

Liberty coach Rich Muraco is definitely in the last category, and this year’s Patriots have the battle scars to prove it.

They dropped to 0-3 after a 48-7 loss to St. John Bosco on Friday night. That came after the Patriots lost to Chandler (Arizona) 31-17 in their season opener and 36-22 to Mililani (Hawaii) last week.

“Some of it depends on where your program is,” Muraco said. “If I were taking over a new program or had a team that hadn’t had a lot of success and needed to learn to win, I’d probably schedule a couple of easier games.”

Even for someone who prefers a tough schedule, Muraco acknowledges this year is brutal.

St. John Bosco is ranked No. 3 in the nation by USA Today, and its starting quarterback, DJ Uiagalelei, has committed to defending national champion Clemson. Mililani might be the second-best team in Hawaii. And Chandler is a three-time defending state champion in Arizona.

It won’t get any easier Friday when Liberty plays at Centennial (California), which has been ranked in some polls this season.

“I try to schedule really tough games every year, but this year I was able to pick it up to another notch,” Muraco said. “We’re playing our first four games against teams that finished in the top 40 in the nation last year. I want the kids to face adversity and learn from mistakes, and hopefully learn how to win against quality opponents. We had chances in the first couple of weeks and weren’t able to finish. (Friday) we were just outplayed.”

Muraco said he’s not concerned about his team’s confidence when it begins league play. Actually, he expects it to soar.

“No disrespect to anybody in our league, but when you play nationally ranked programs that have in some cases double-digit Division I college players, what are you going to fear when you play a league team after a schedule like that?” Muraco said.

— Palo Verde’s defense is outstanding — in the second half

On one hand, Palo Verde coach Joe Aznarez has to be thrilled with his team.

The Panthers are 2-0, and their defense hasn’t allowed a point after halftime in wins over Durango and Desert Oasis.

Now if they could just figure out how to start the game that way. Palo Verde fell behind Durango 27-13 at halftime before rolling 30-0 in the second half. On Friday, Desert Oasis led 21-12 before the Panthers scored 15 consecutive points in the second half to get the win.

But when they did, they connected big.

Davis took a wide receiver screen 75 yards for a score in the second quarter, and Scroggins hit him over the middle for a 64-yard TD. Davis had 142 yards on his three catches and has 312 yards and five touchdowns in three games. Scroggins has 751 yards passing with nine TDs.

The Wildcats are 3-0, thanks in large part to the explosiveness of their offense. That ties their win total from last season.

— Chaparral is 3-0 and next will play a Clark team that has won two of its past three games and allowed six points in its victories.

— Cheyenne’s athletic defense will be tested by Cimarron-Memorial and standout running back Jordan Norwood, who has 404 yards rushing and two TDs in two games.

— Palo Verde’s defense will try to get after a Green Valley offense that could be without starting quarterback Brian Castro, who left with an injury in the second quarter of Friday’s loss to Moapa Valley.

— Moapa Valley meets Pahrump Valley in a Class 3A showdown.