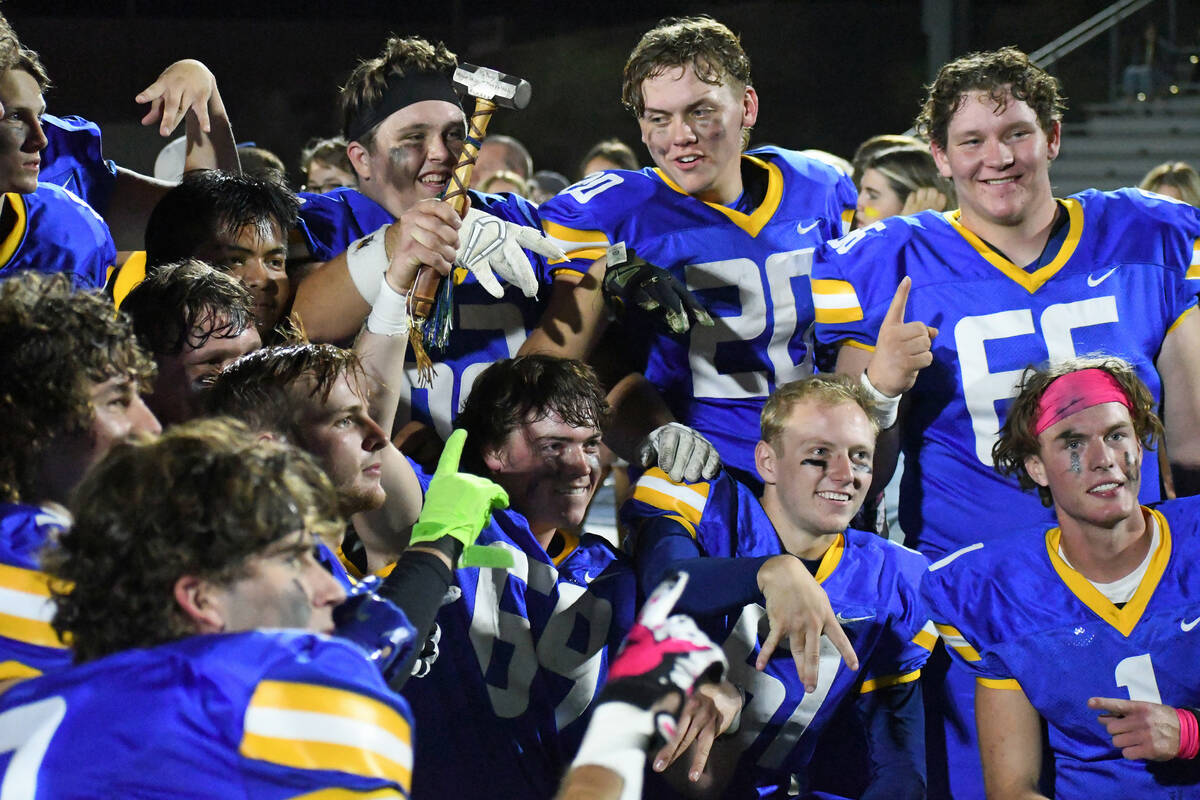 Moapa Valley seniors pose with the Hammer following a 46-28 victory over Virgin Valley on Friday, Oct. 22, 2021. (Lindsey Smith, Special to the Review Journal) 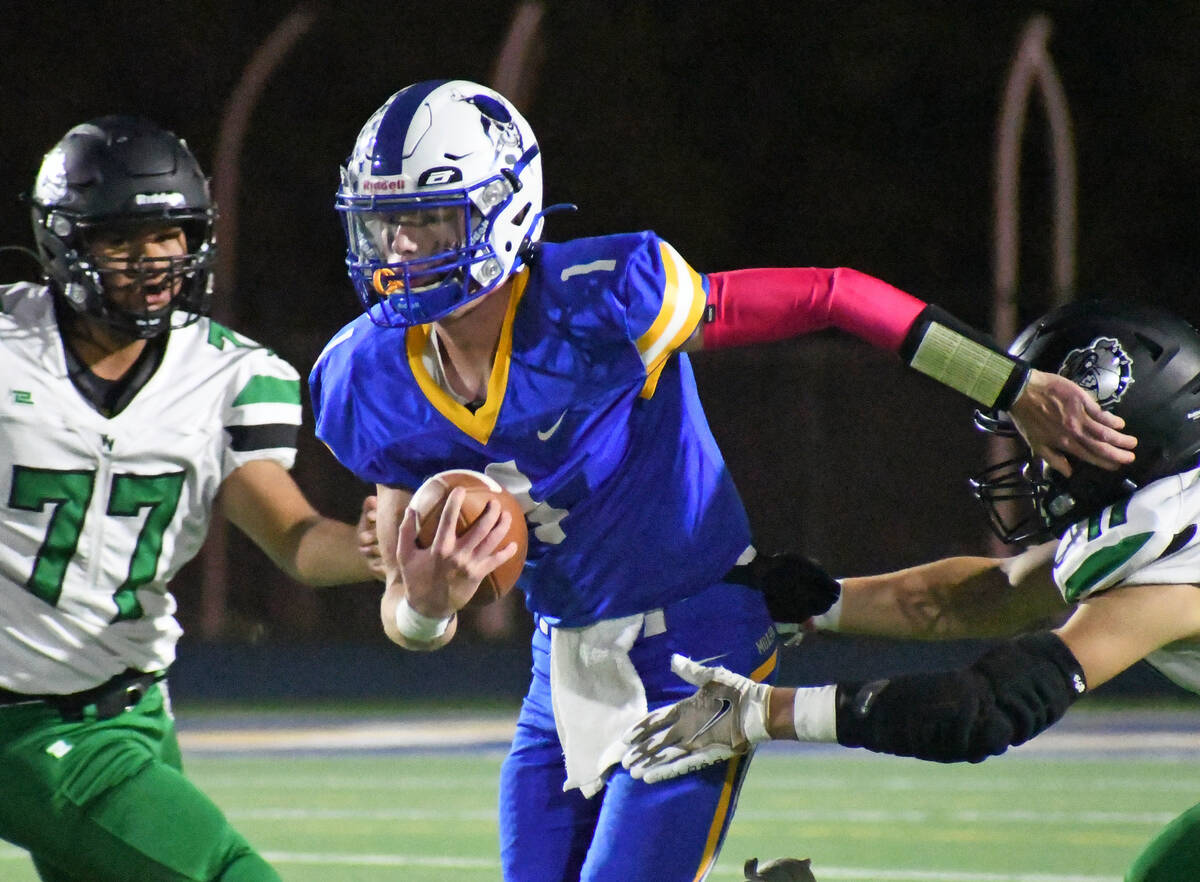 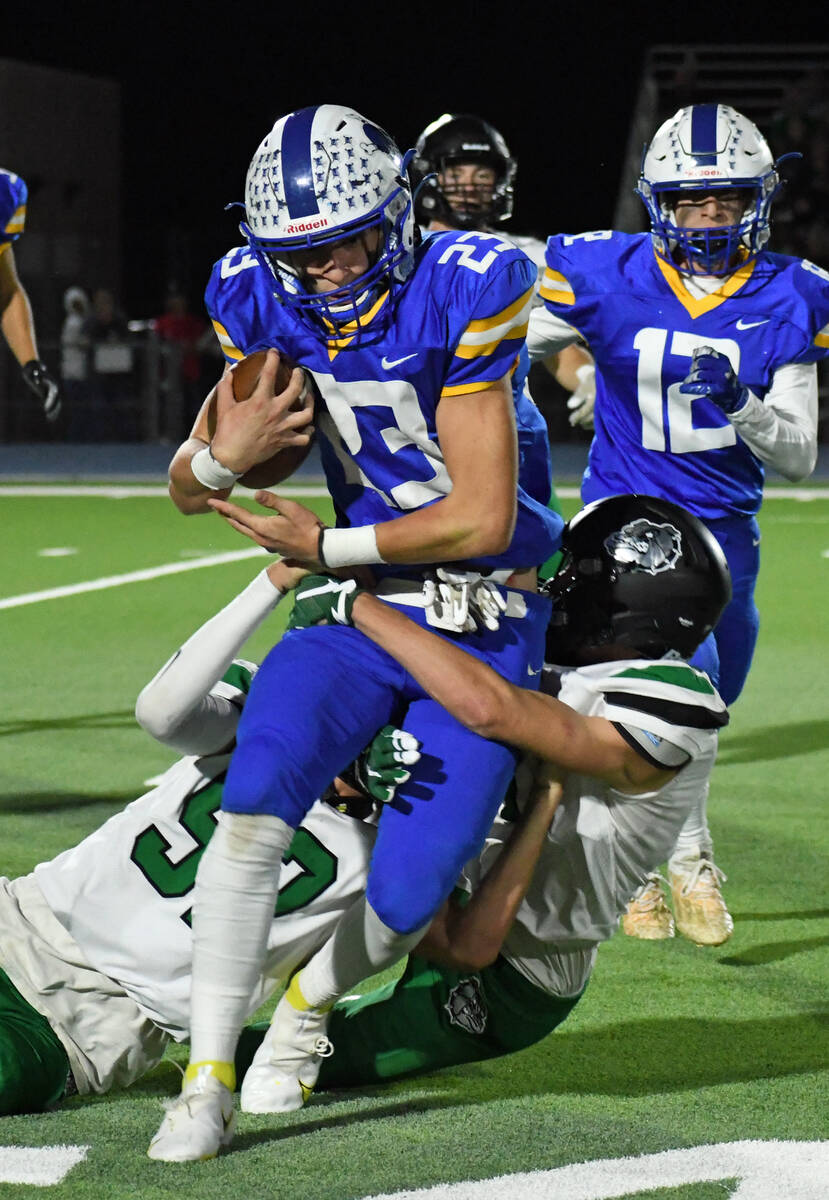 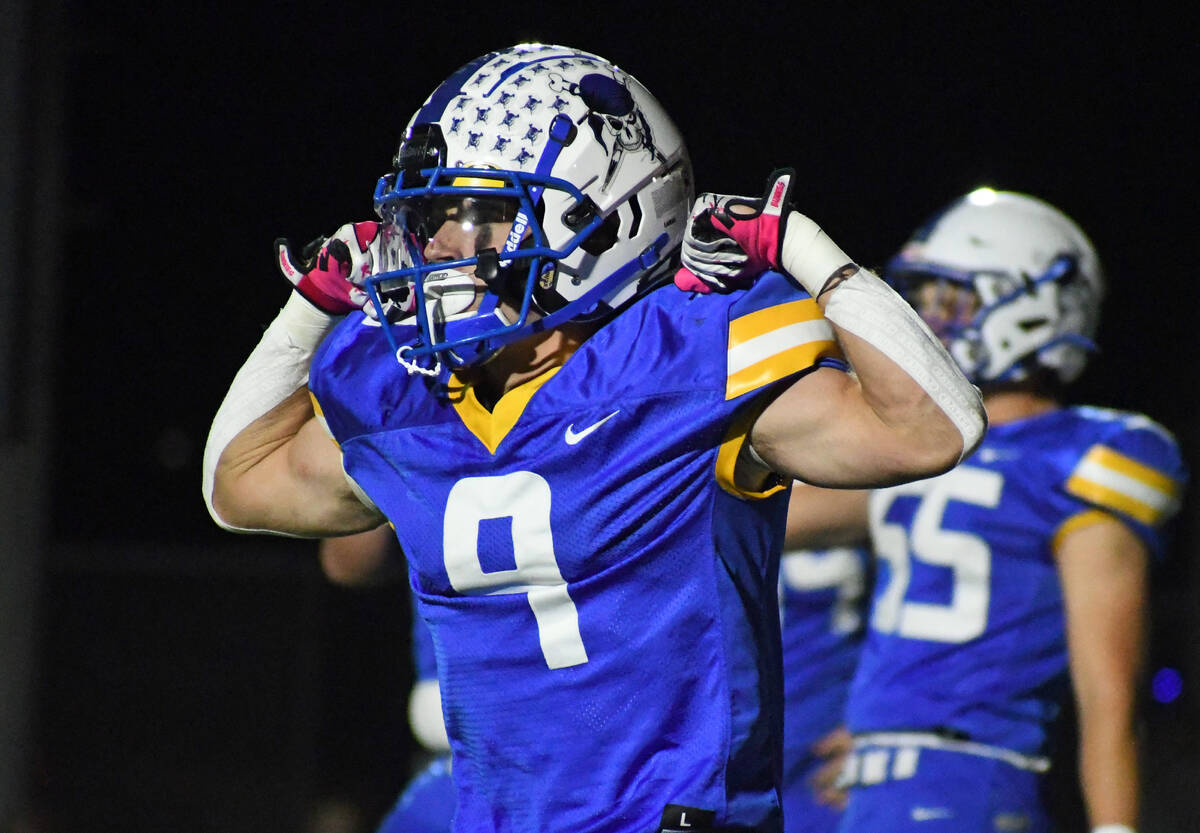 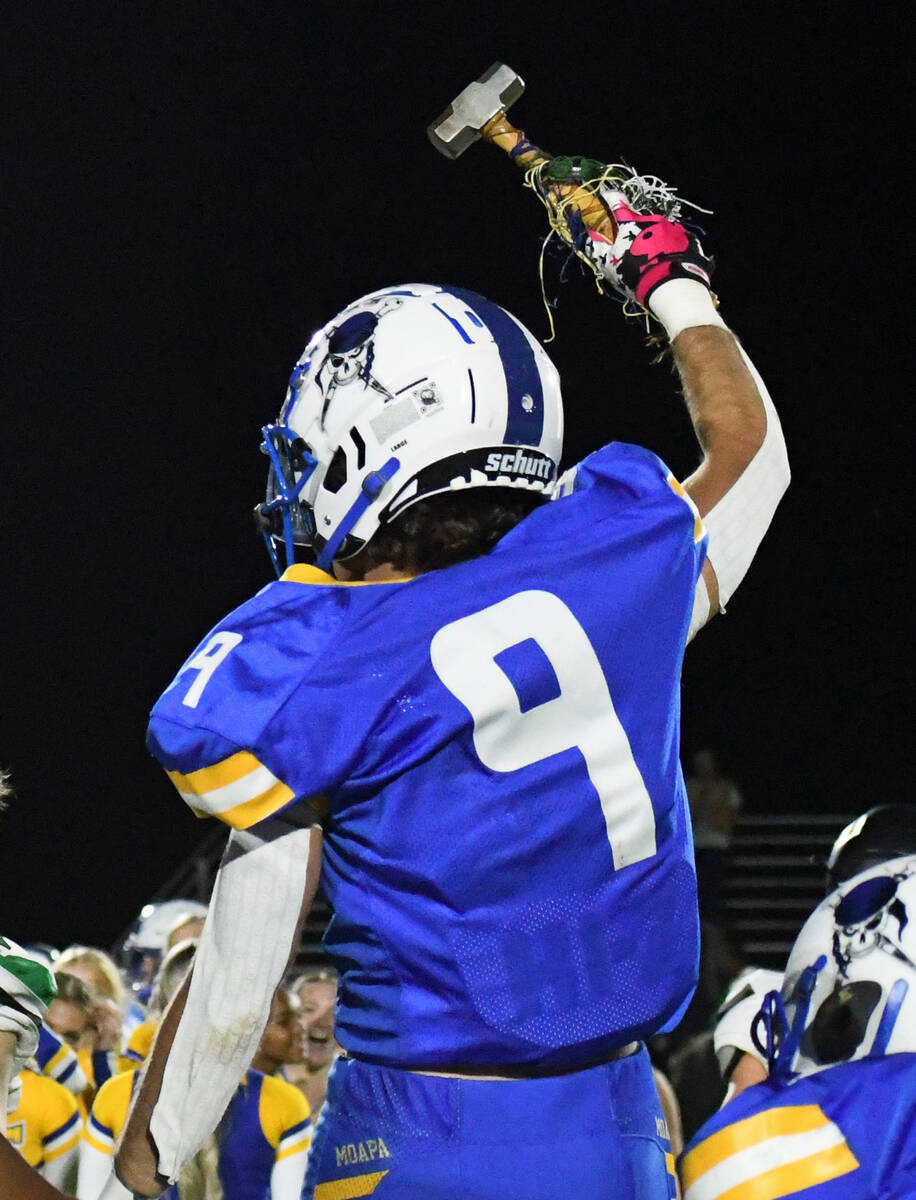 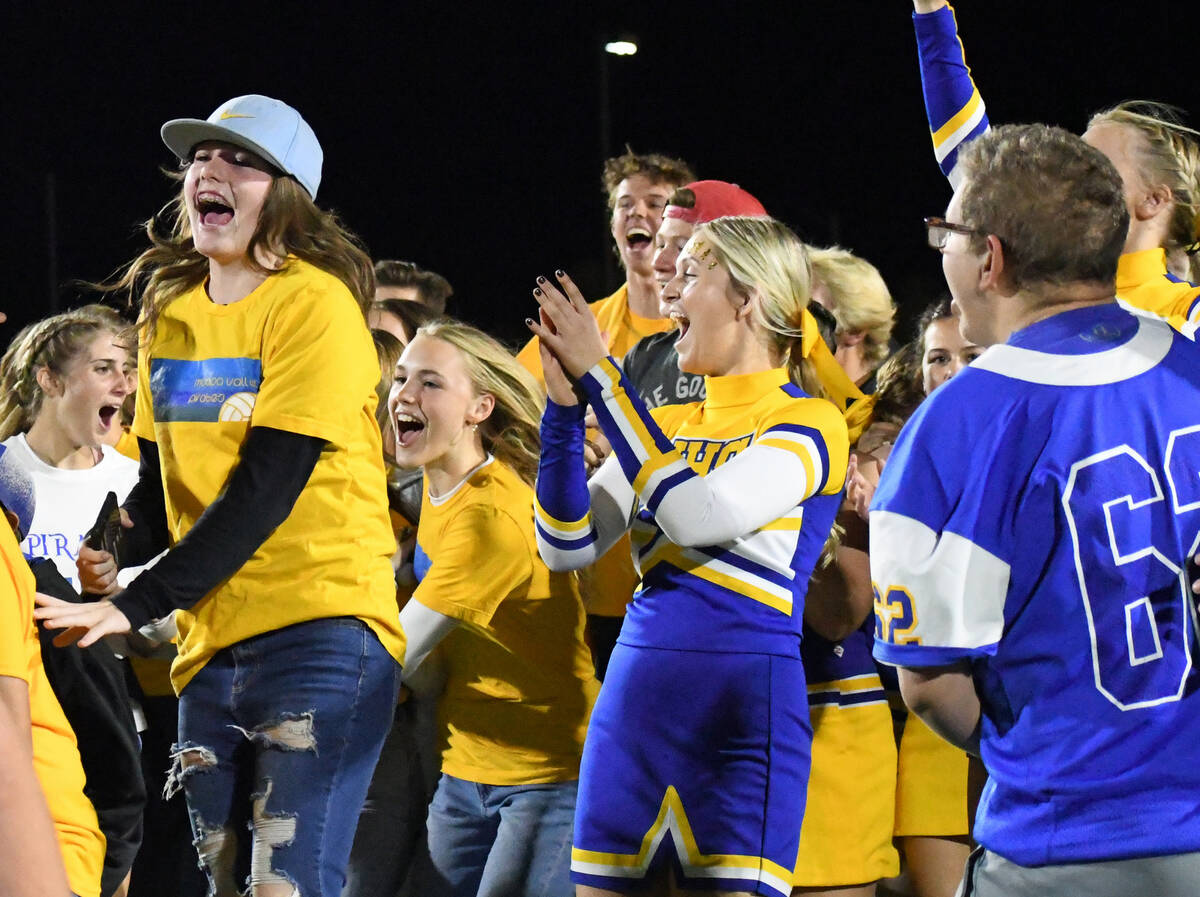 The Moapa Valley student section joins the football team on the field following a 46-28 victory over Virgin Valley in the Hammer Game on Friday, Oct. 22, 2021 at Moapa Valley High School. (Lindsey Smith, Special to the Review Journal) 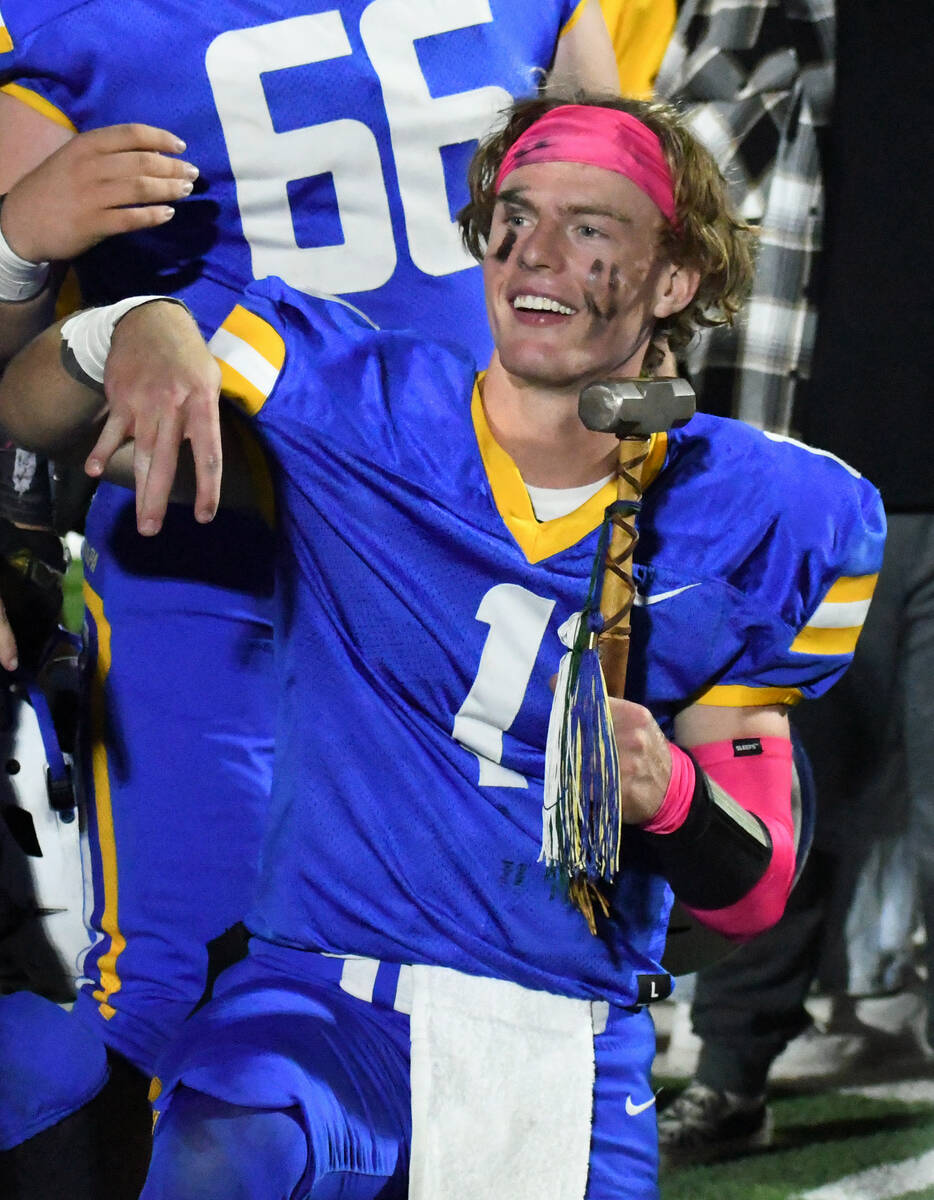 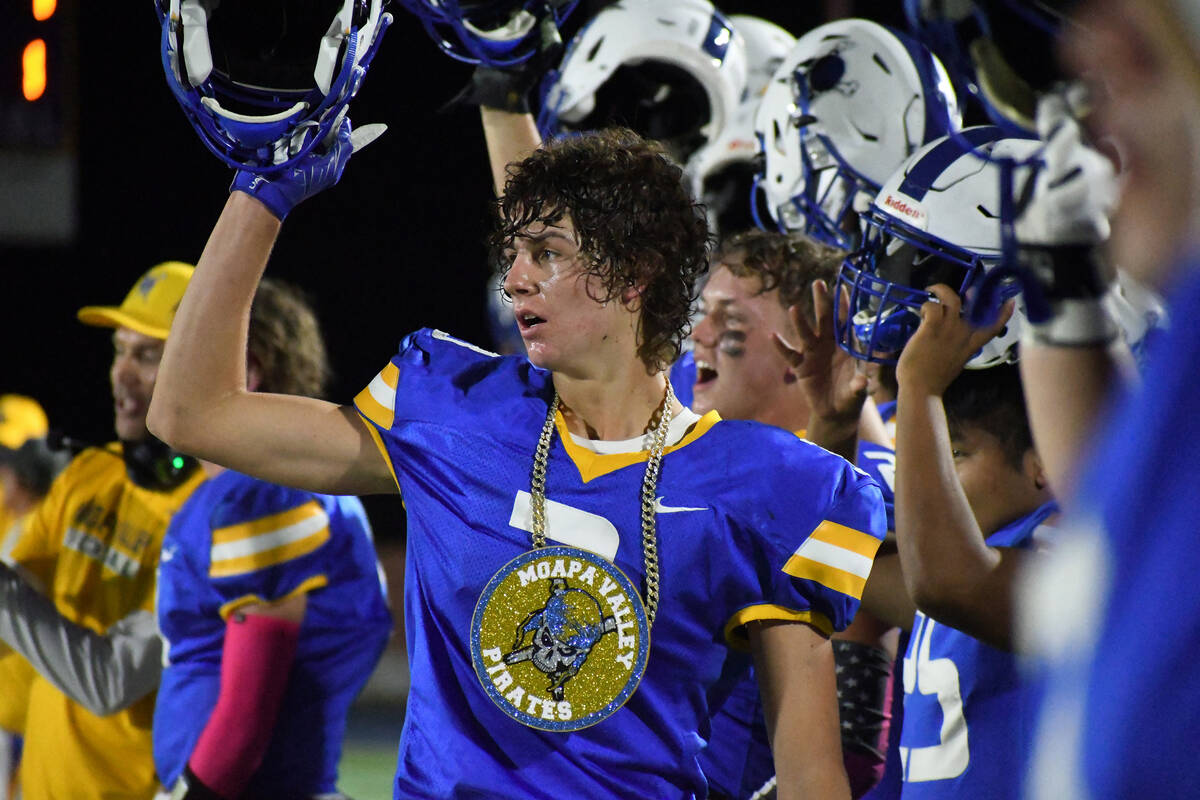 Moapa Valley’s Dustin Gordon sports the Pirate Turnover Chain after running back an interception for a touchdown during the first half of the Hammer Game against Virgin Valley on Friday, Oct. 22, 2021 at Jeff Keel Stadium. Moapa Valley won 46-28. (Lindsey Smith, Special to the Review Journal)

First impressions can be deceiving. At least, that’s what Moapa Valley aimed to prove Friday night after a rocky start to the annual Hammer Game against rival Virgin Valley.

But by the time the final horn sounded in a 46-28 home victory, the Pirates had all but forgotten about their early struggles.

“We seem to have an issue or two every once in a while coming out a little bit flat and getting a hiccup or two, but it woke us up a little bit, and we came back strong,” Moapa Valley coach Brent Lewis said. “We had a couple drives that stalled, and we didn’t let that deter us.”

The Bulldogs’ defense had the momentum early, sparked by a pick-six by senior Benson Leavitt. Leavitt, a two-way standout, had a 41-yard interception return on the second play from scrimmage, and the Bulldogs later recovered a fumble as the Pirates’ offense struggled to find its footing.

Heiselbetz found a wide-open hole to walk into the end zone untouched. The senior finished with three touchdowns, also scoring on a 1-yard push in the second quarter and a 4-yard completion from senior quarterback Peyton Neilson.

“That was huge for us,” Heiselbetz said. “We had a ton of momentum going into that second half, and that really helped finish the game for us.”

Dustin Gordon scored back-to-back touchdowns for the Pirates in the final minute of the first half. Moments after reeling in a short touchdown pass from Neilson, Gordon pulled down an interception and returned it 37 yards for a score.

Gordon also opened the second half with an interception and scored his third touchdown late in the fourth quarter.

“He was a man among boys tonight,” Lewis said. “He was all over the field.”

Virgin Valley finally found the end zone late in the third quarter on a 5-yard pass from Gavin Brown to Leavitt. The two connected on another 5-yard touchdown late in the fourth, and Brown threw an 18-yard TD pass to Cutler Crandall in the final minute.

“Both of these schools have storied traditions, and we are fighting and scrapping for championships, so that was what it was all about tonight. We wanted to make sure the best team won,” Lewis said.

Lewis knows the tradition well. His father, a 1955 Moapa Valley graduate, played in the rivalry game.

“This is year 26 for me, and it just gets sweeter every time,” Lewis said.

The win marked the second consecutive Hammer victory for Moapa Valley, which defeated Virgin Valley 18-14 in the spring.