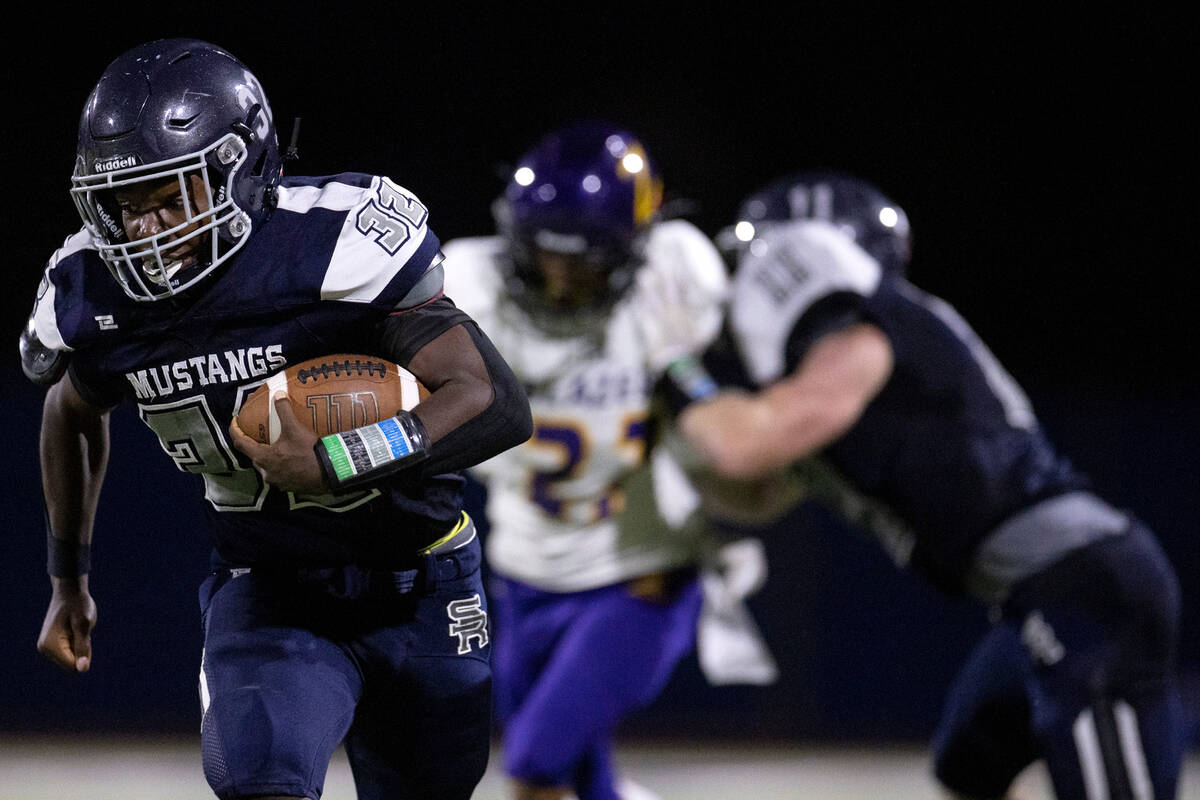 Shadow Ridge slotback Jon Wilson (32) breaks away with the ball before scoring a touchdown during a Class 4A high school football game against Durango at Shadow Ridge High School on Thursday, Aug. 18, 2022, in Las Vegas. (Ellen Schmidt/Las Vegas Review-Journal) @ellenschmidttt 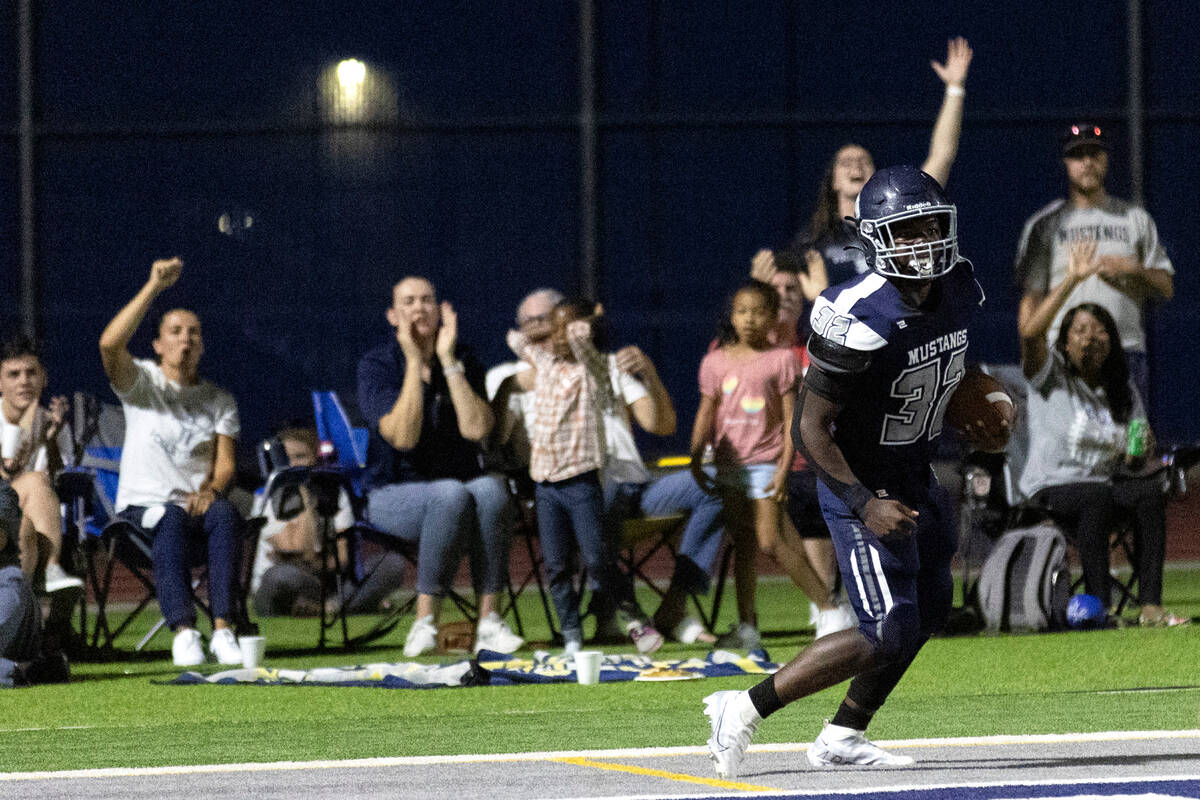 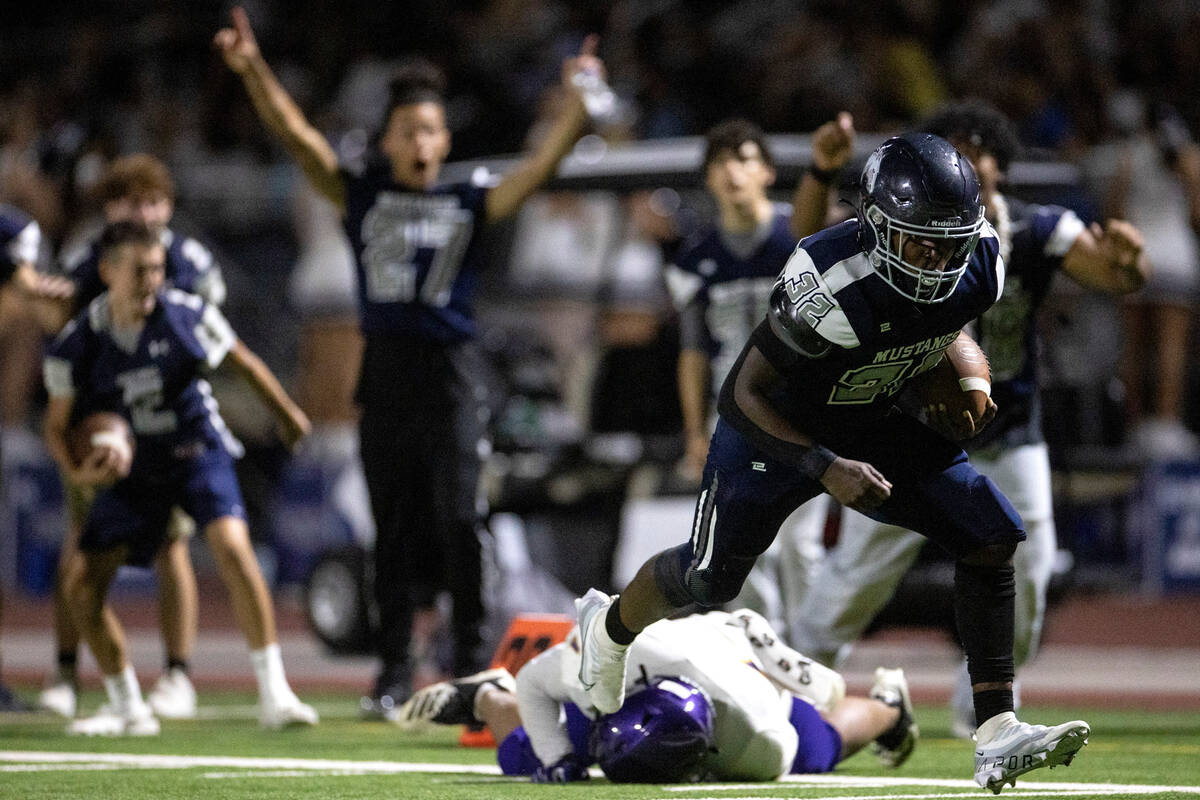 Shadow Ridge slotback Jon Wilson (32) reaches the end zone for a touchdown that was not counted during a Class 4A high school football game against Durango at Shadow Ridge High School on Thursday, Aug. 18, 2022, in Las Vegas. (Ellen Schmidt/Las Vegas Review-Journal) @ellenschmidttt 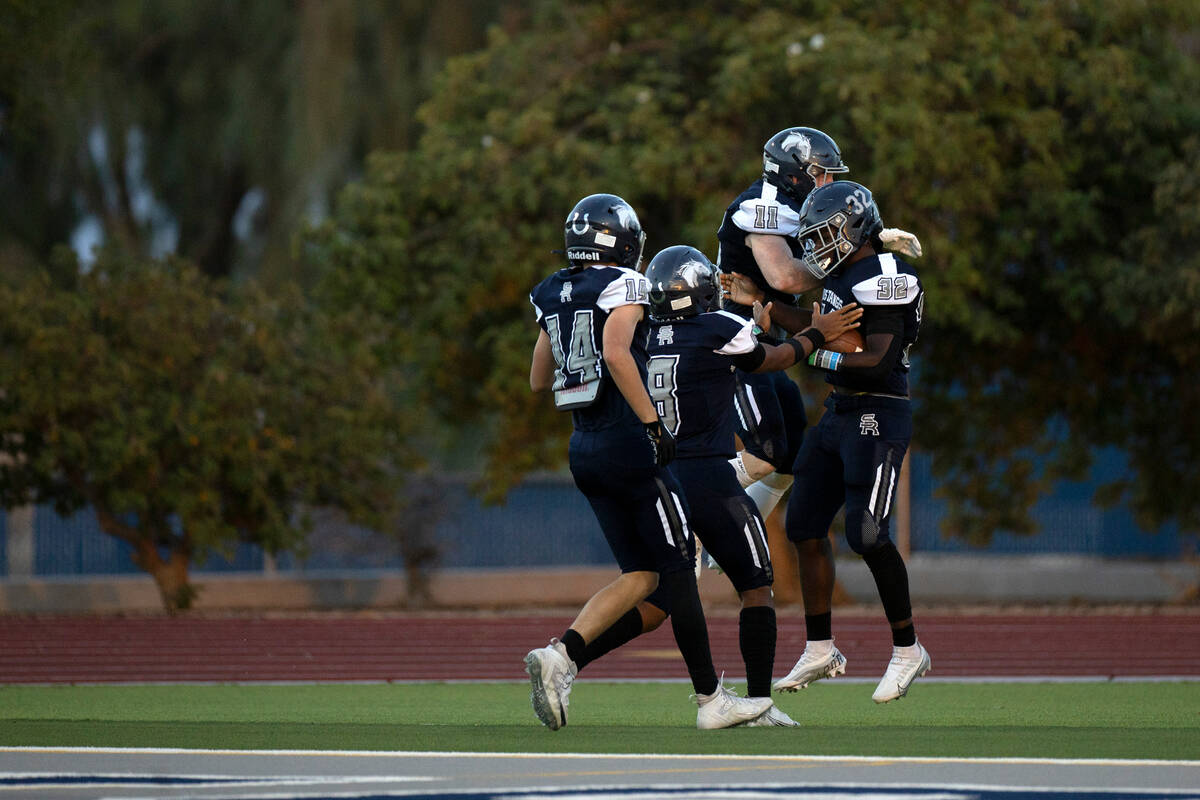 On the second play of Shadow Ridge’s season, Jon Wilson knew the play was being called for him to get the ball.

The junior admits he was nervous, not only because it was his first varsity game but also the first time playing in a game in the United States in six years.

Wilson went 73 yards on that first carry on a Thursday night in which he ran for 161 yards and two scores on only three carries in a 36-7 win over Durango. He had a fourth carry that also went to the end zone but was called back because of a penalty.

“I was kind of nervous,” said Wilson, who is the Nevada Preps Athlete of the Week. “But it felt really good to be back out there.”

Wilson’s father, Jon Sr., is in the Air Force, and the family was stationed at Royal Air Force Lakenheath in England for the past five years.

Wilson played youth football in Arizona and Florida before moving overseas, where he picked up rugby. He joined the Lakenheath High School football team as a freshman, but the season was canceled because of COVID. Last year, the team’s season was shortened to three games.

The Wilsons returned to the United States at the end of last year, with Jon Sr. stationed at Creech Air Force Base.

That’s when Shadow Ridge coach Travis Foster received word that there was a new student.

“I got an email from his club coach, saying that this kid is in the front office and he’s our best player,” Foster said. “He said, ‘We’re sad to lose him, but you’re going to have a special athlete on your hands.’”

Wilson, who is 5-feet-10 and weighs 185 pounds, almost immediately got to work in the weight room and quickly bonded with his teammates.

Foster described Wilson as a “goofball, but he’s an awesome kid.”

Wilson agrees with the goofball assessment and said he likes to have fun, but he’s serious about the goals he and his teammates have for this season.

With quarterback Coen Nicholas Coloma and JaQuieze Holland, who combined for 2,558 yards and 38 touchdowns rushing, Wilson doesn’t have to carry the offense. But he adds a dimension that will be difficult for opponents to handle.

“We knew we had something special with Coen and JaQuieze, and we know Jon was going to be good,” Foster said. “But to see him breaking tackles on the edge and getting to that third level and outrunning guys, we haven’t had that in about four or five years.”

Wilson gives Coloma and Holland, along with his offensive line, all of the credit for his success his first time out.

Shadow Ridge advanced to the Class 4A state championship game last year before falling 61-27 to Silverado. The Mustangs hope having Wilson as an additional weapon will help them to another successful season.

“They all welcomed me to the team really well,” Wilson said. “(Coloma and Holland) helped me a lot. They told me what to fix, where to go and how to read the formations. I didn’t know anything about Shadow Ridge when I got here, but people started telling me about going to state last year. That got me really excited.”