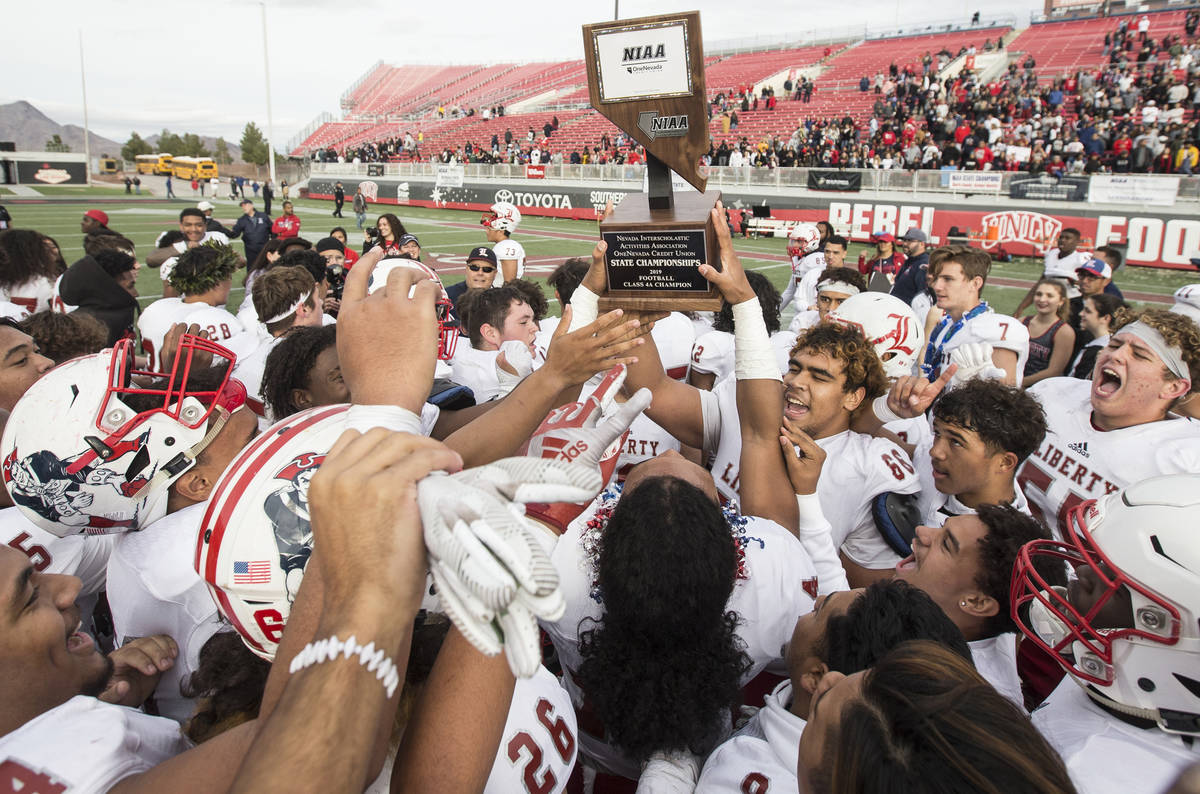 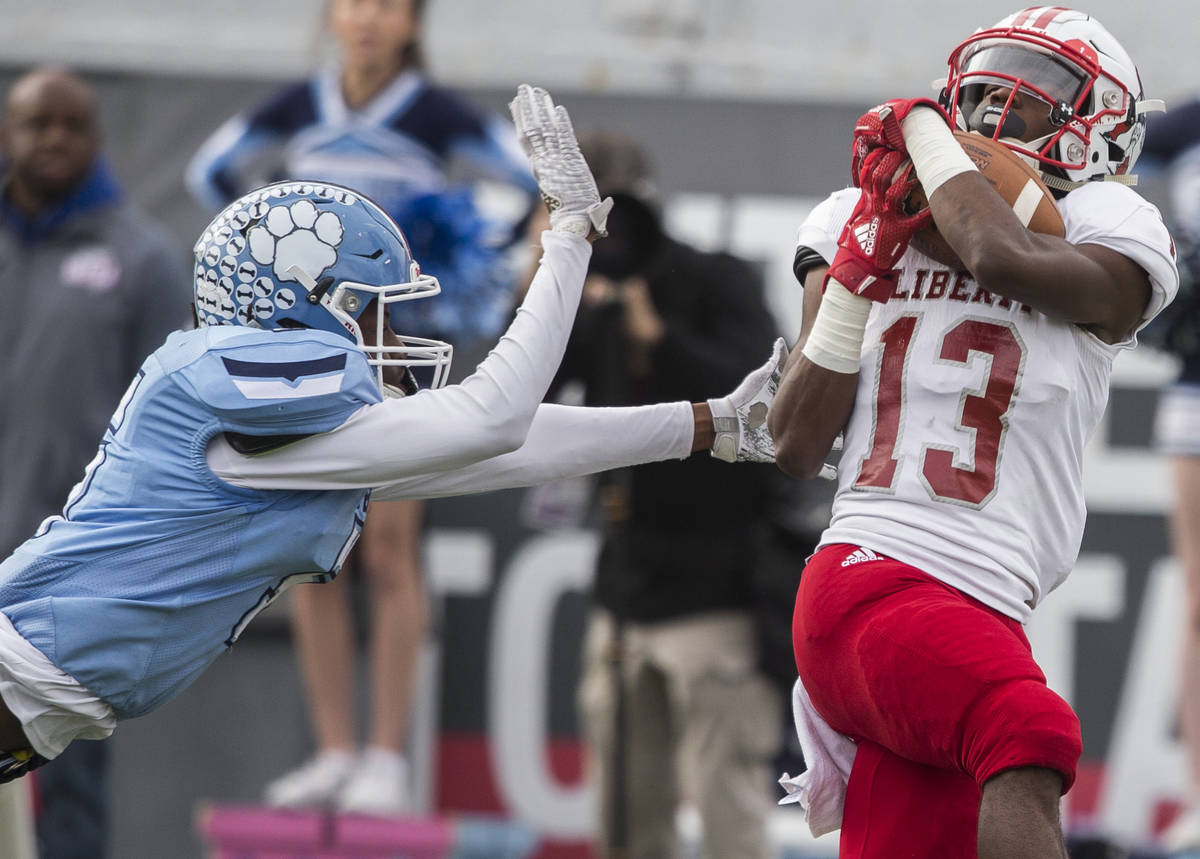 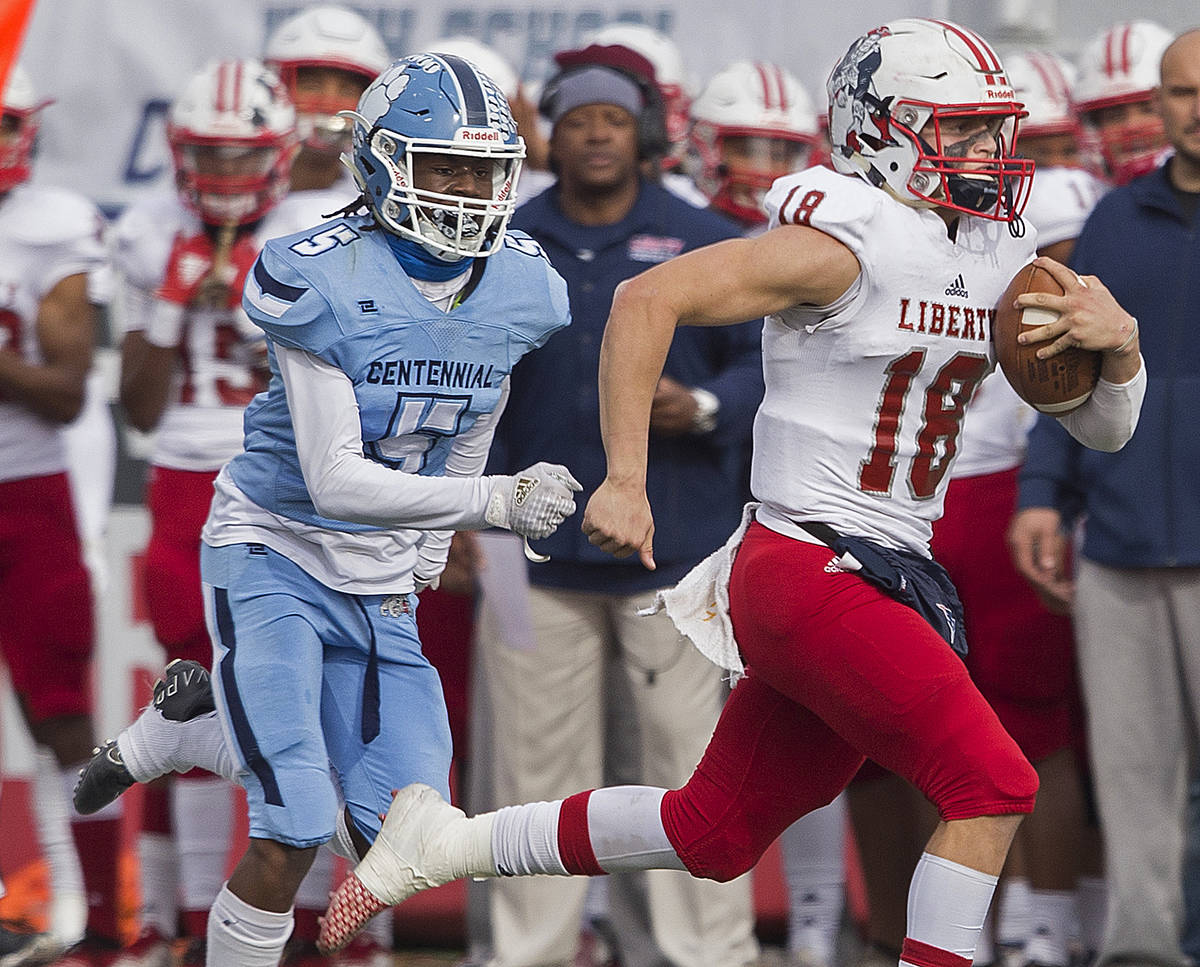 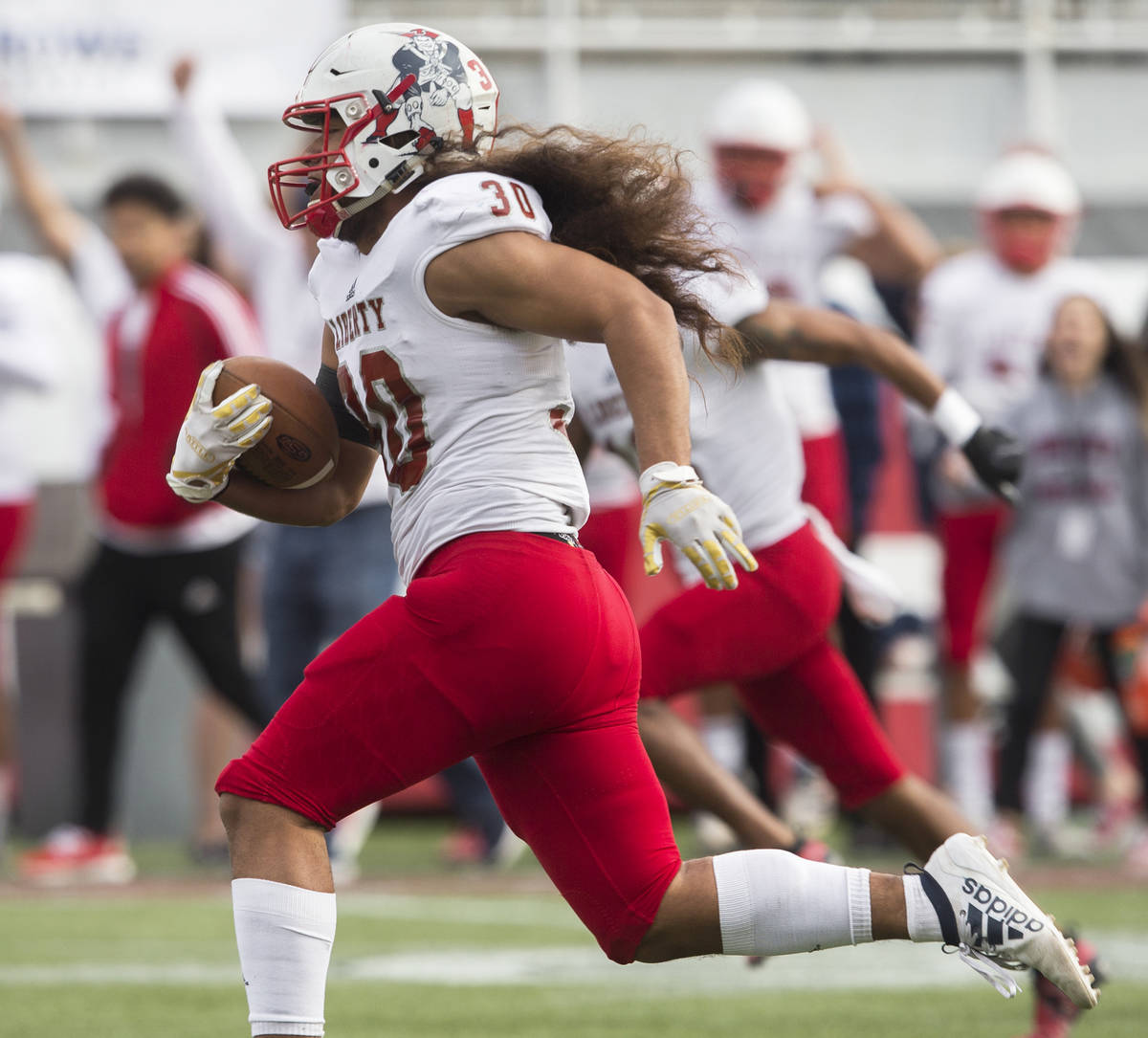 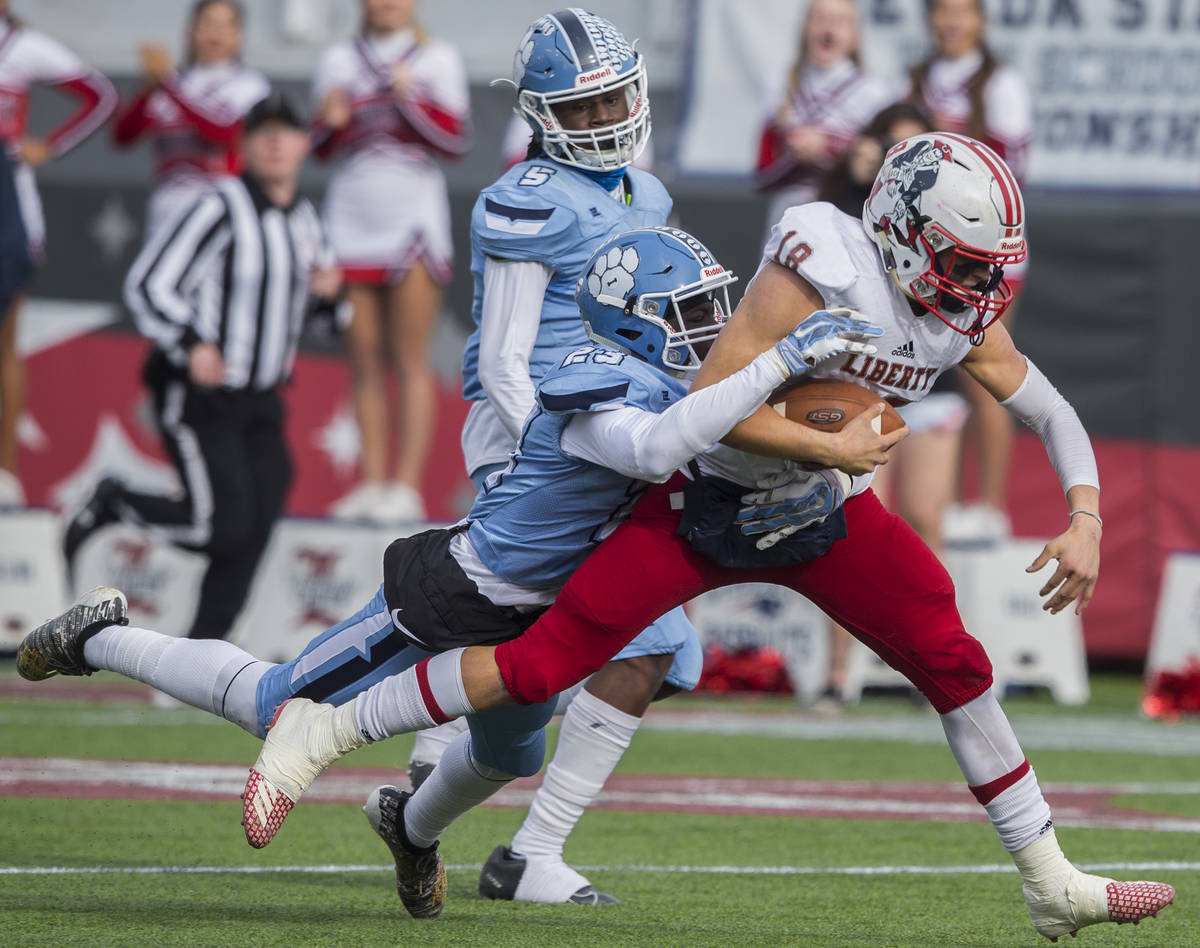 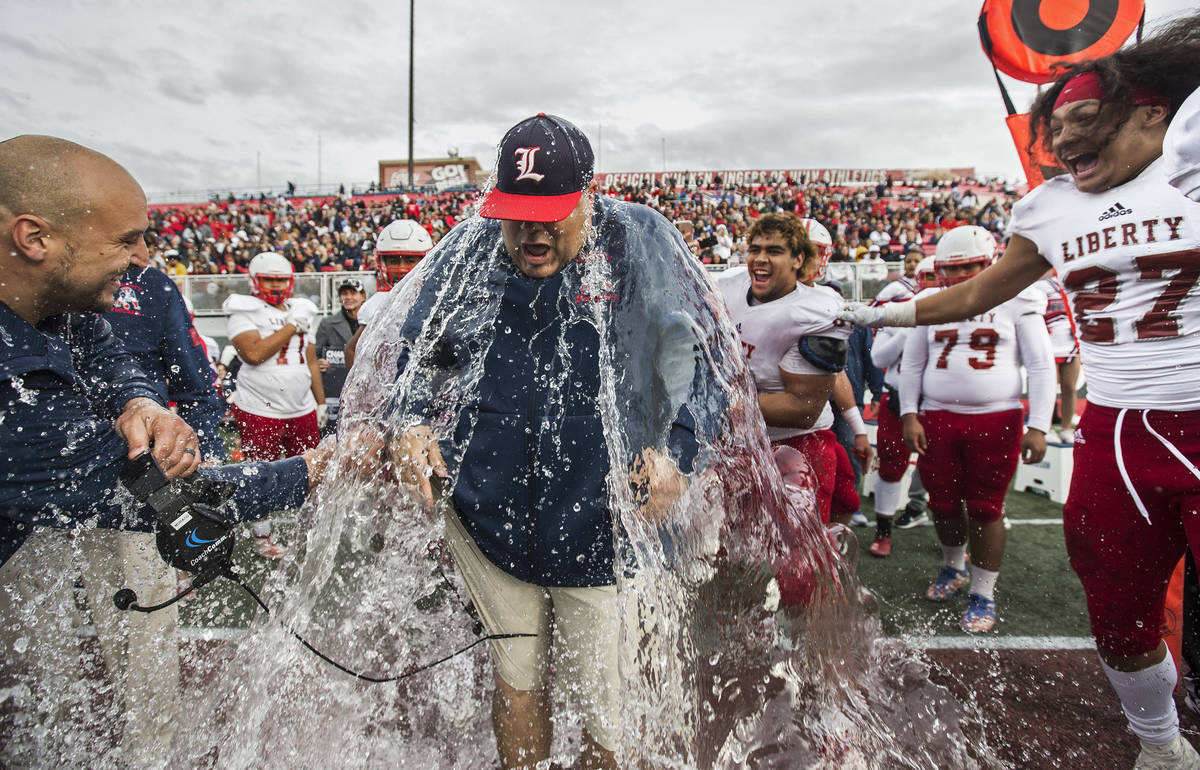 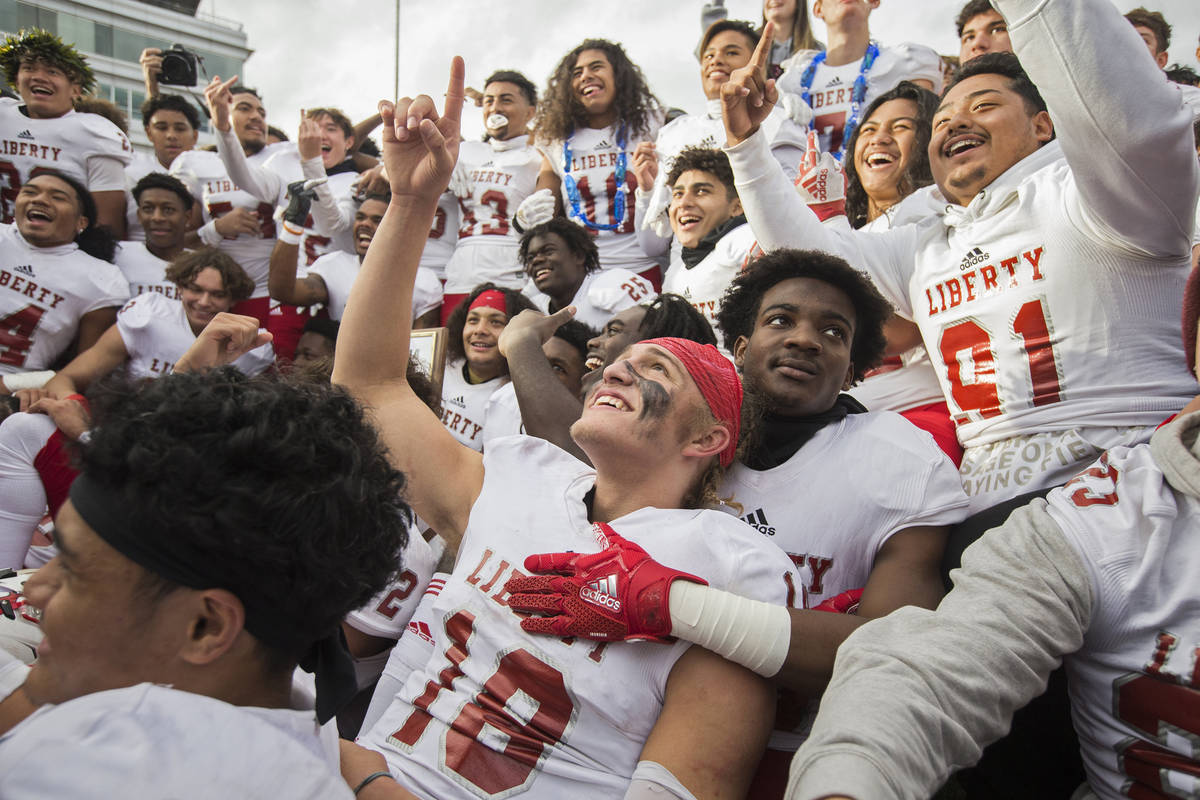 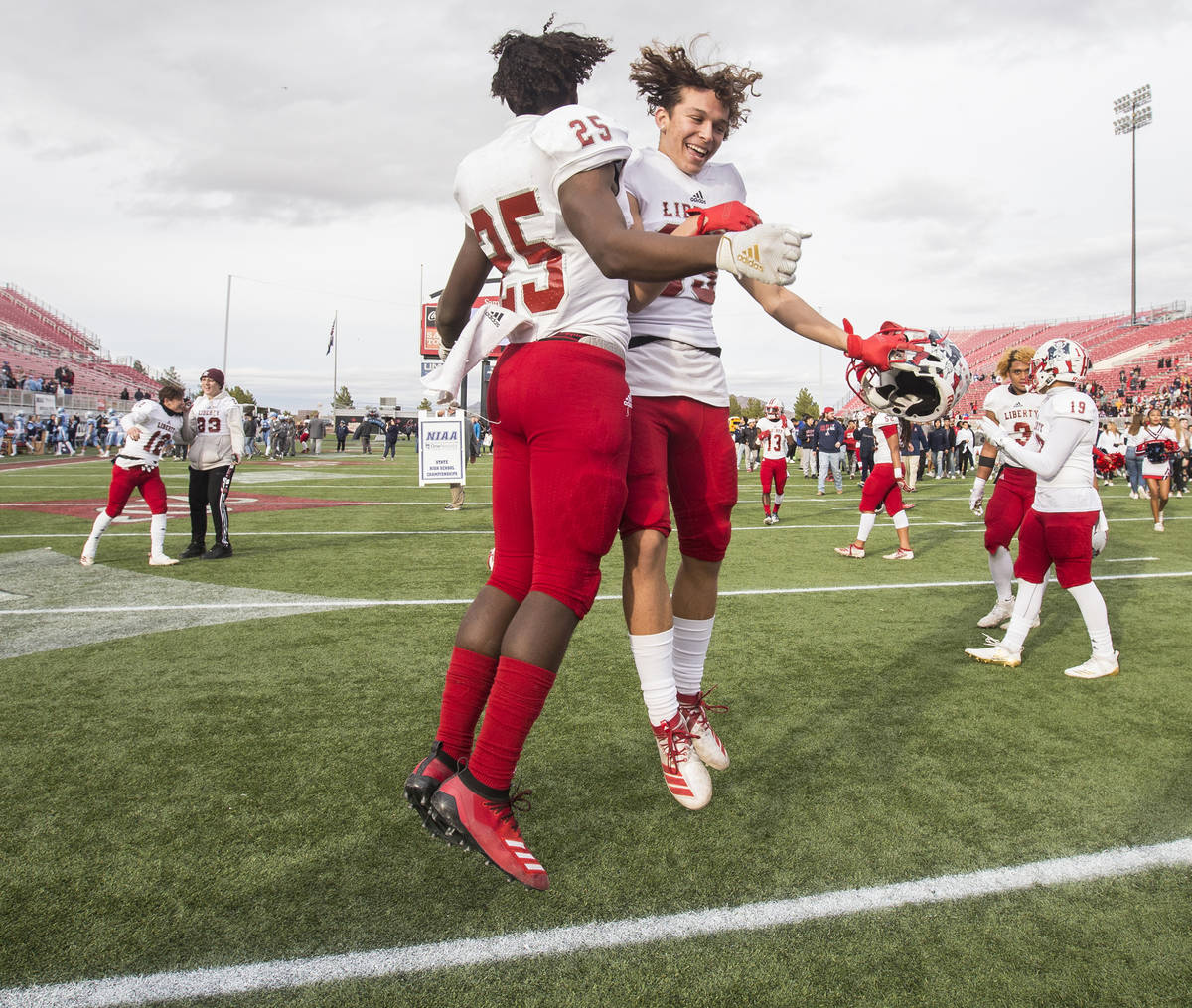 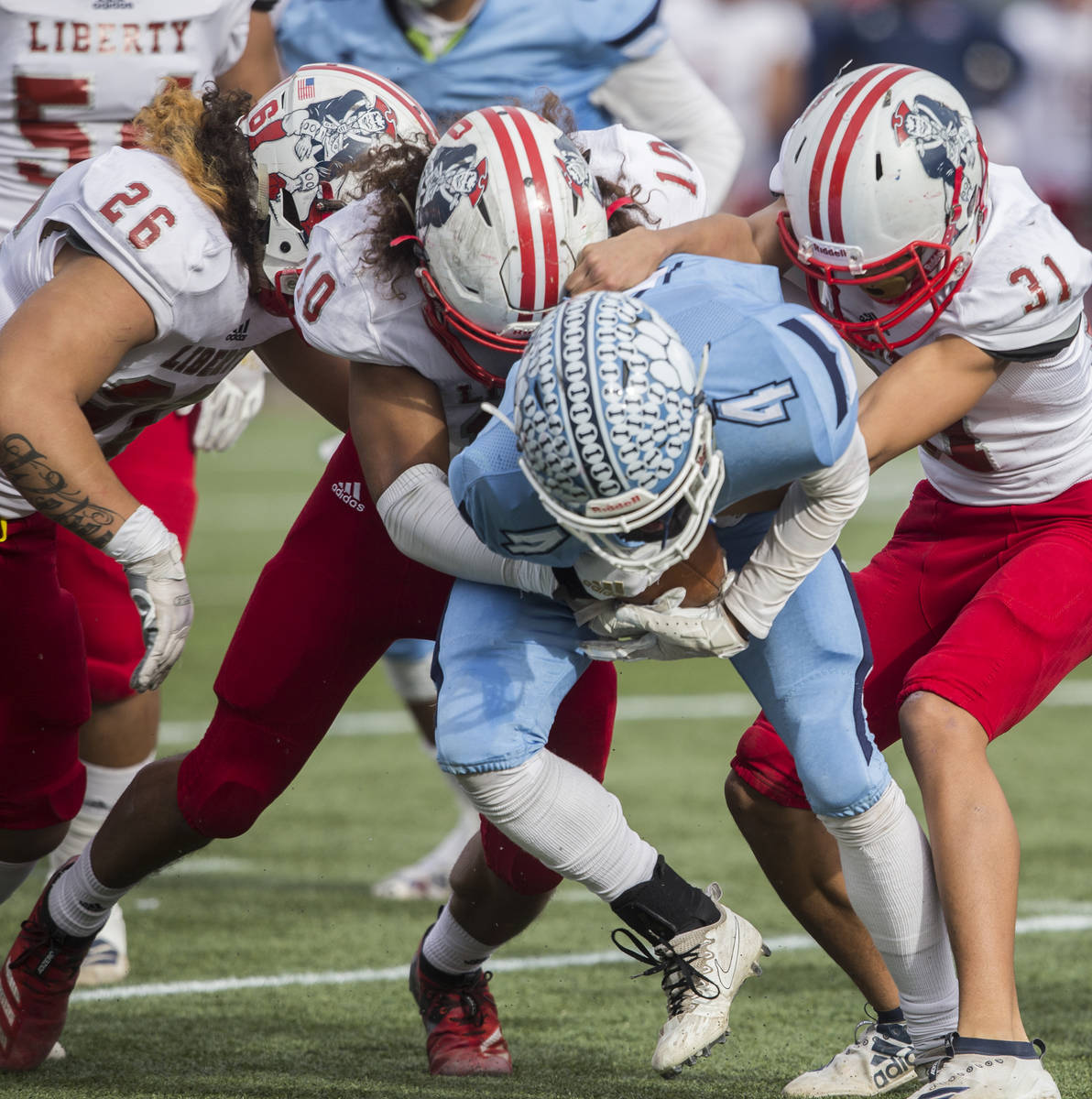 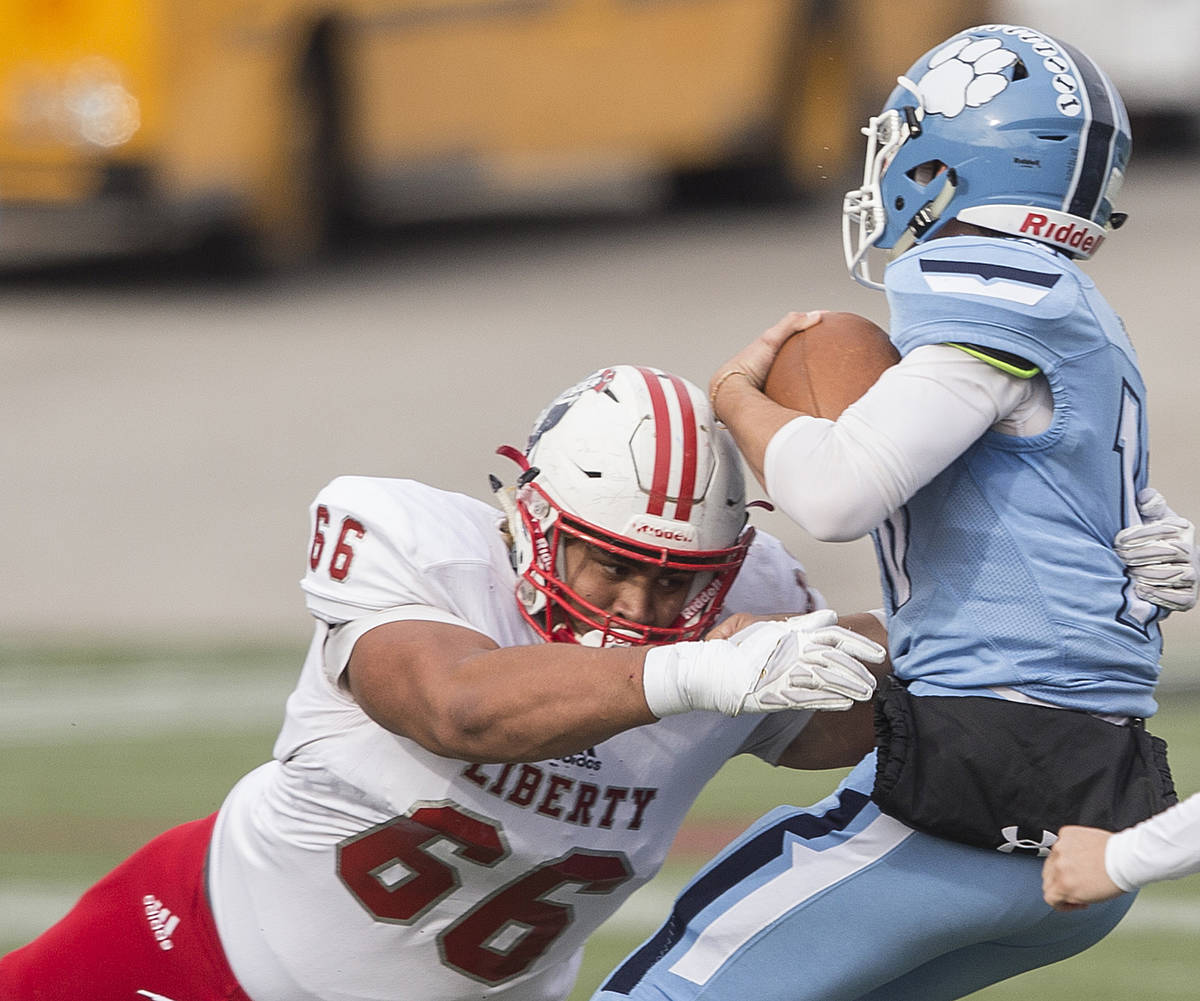 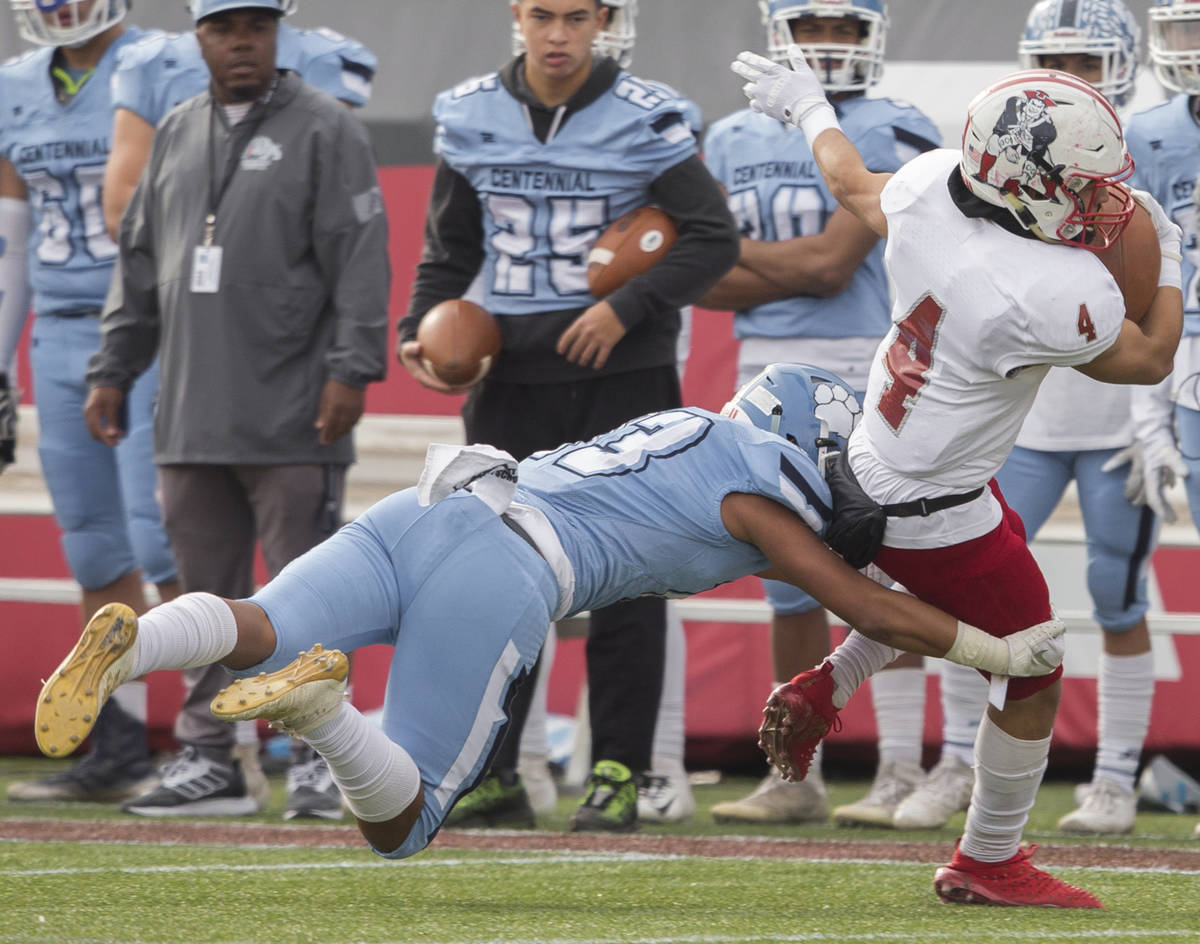 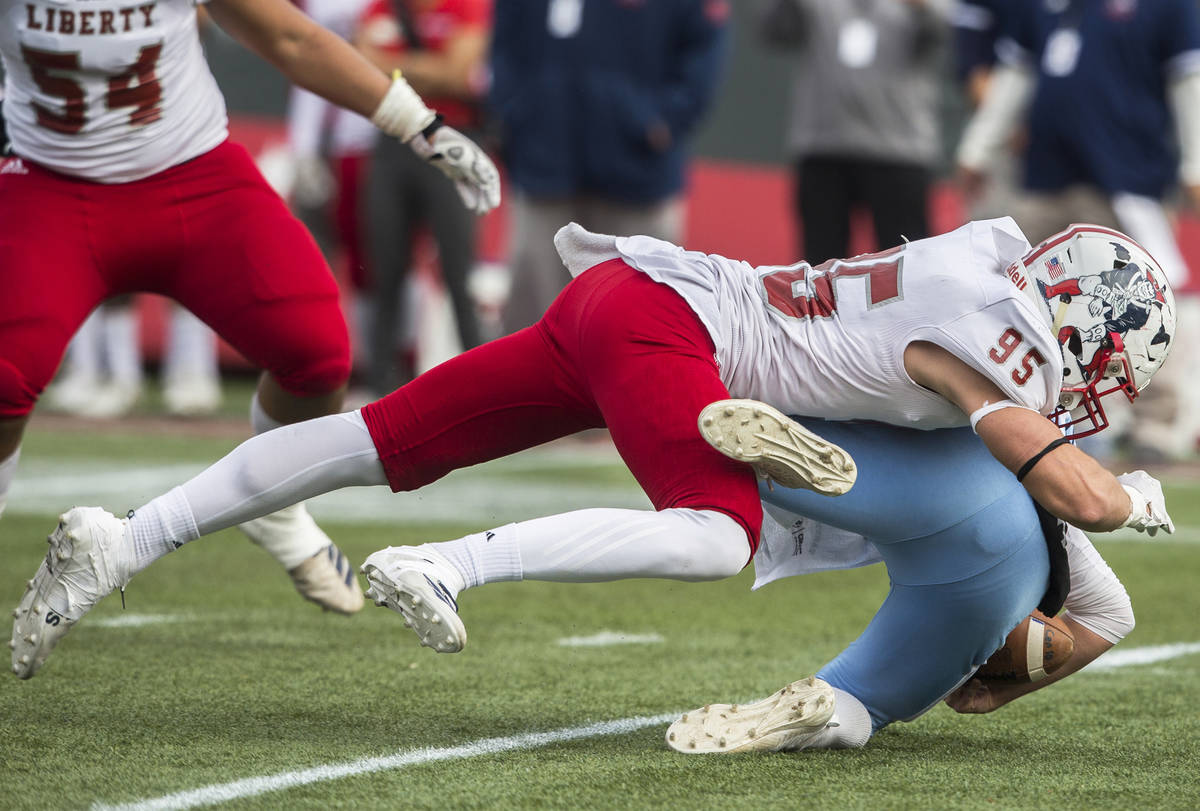 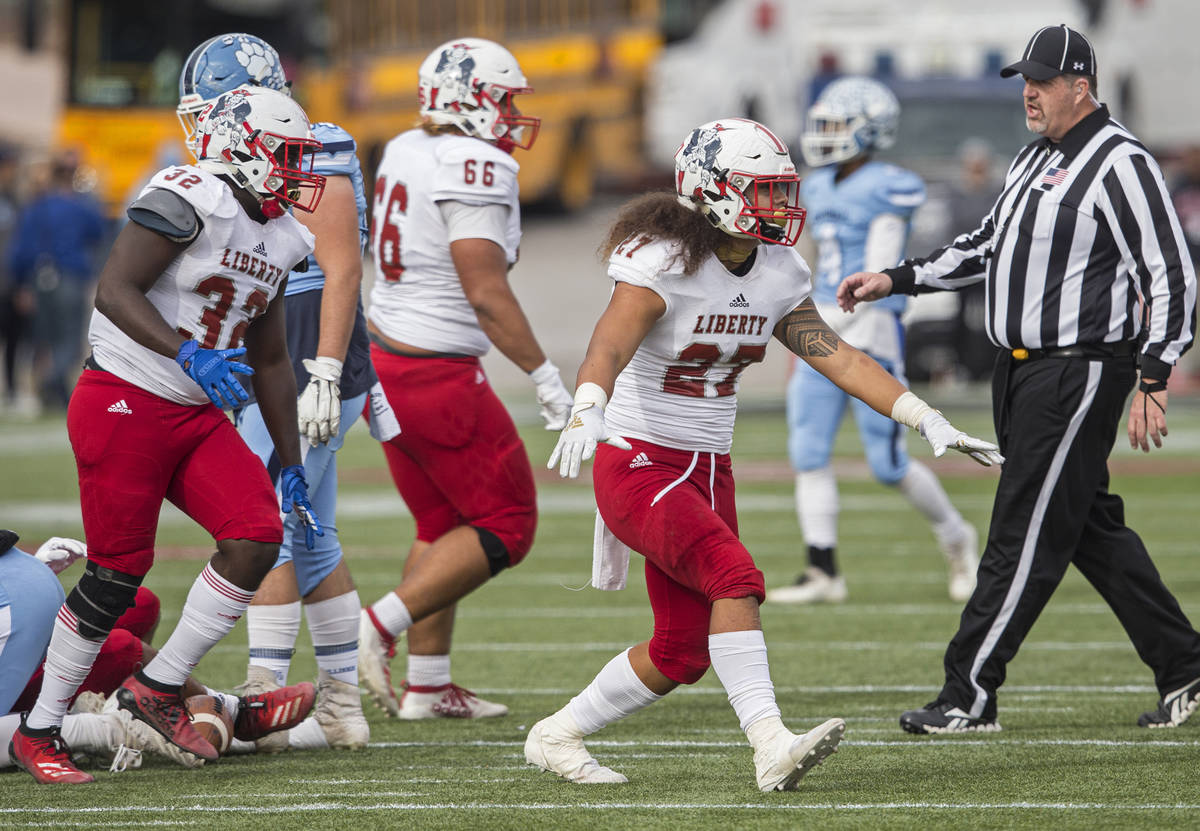 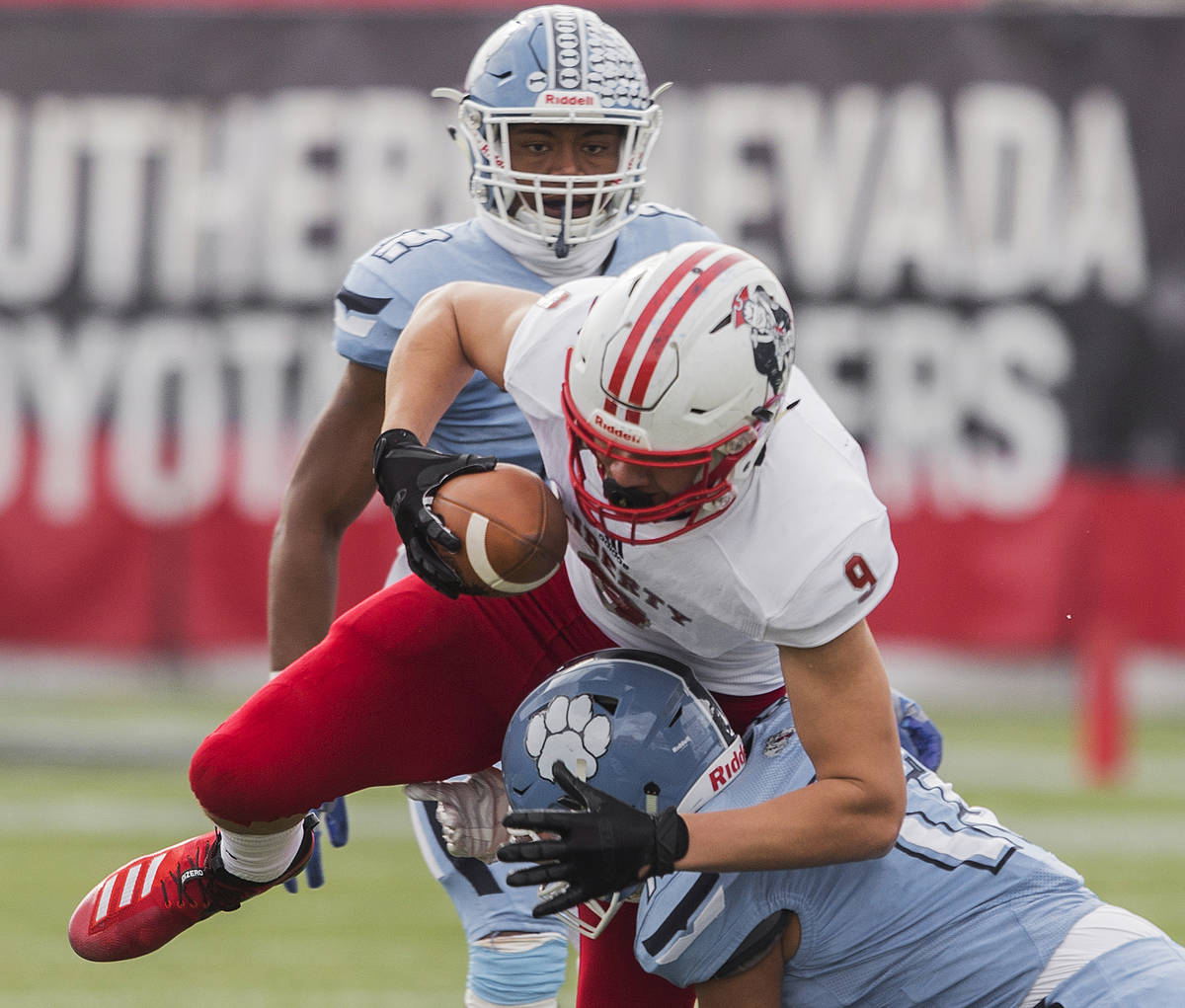 The Patriots had dropped their fifth consecutive game to start the season, a 36-33 loss to Liberty (Arizona), and even some of the team leaders were worried about the direction they were headed.

“We did get down after that fifth loss,” Liberty tight end Moliki Matavao said. “It was more, ‘Wow, what’s going on?’ What do we need to do to fix this? Everyone was breaking off.”

Before Liberty began its Southeast League schedule against Chaparral, it held a team meeting. The Patriots left the locker room that day more united and didn’t lose again.

Eleven weeks after the loss to Arizona’s Liberty, the Patriots stood on the field at Sam Boyd Stadium passing the trophy around after beating Centennial 50-7 for their first state championship.

Liberty’s 10-game winning streak included a 30-24 overtime win over Bishop Gorman that ended the Gaels’ state championship run at 10 straight and a comeback from twice being 14 points down to Bishop Manogue in Reno and a 42-24 win in the semifinals.

“I don’t know how to put into words the joy and the pride we all took in finally winning the state championship,” Liberty coach Rich Muraco said. “Beating a great team like Gorman along the way, that was another goal for us because they’ve set the standard so high for football in Nevada.”

That turnaround from an 0-5 start to the state championship makes Liberty the Review-Journal’s Nevada Preps Team of the Year.

The Patriots might not have seen it at the time, but the adversity they faced as the losses mounted might have been the best thing for them.

“I’d say 0-5 really prepared us to get ready for Gorman,” Liberty offensive lineman AJ Maluia said. “It was a slow start, but at the end of the day, it accomplished what needed to be accomplished through the season — games to get us ready for the playoffs.”

Muraco made a few changes during the bye week between nonleague and league play, the biggest of which was installing Daniel Britt as the starting quarterback. Muraco said it wasn’t an easy decision, since Kanyon Stoneking wasn’t playing poorly. But he liked the mobility Britt added to the offense.

What even Muraco couldn’t have predicted was how accurate Britt proved to be. He hit 78 percent of his passes for 2,060 yards with 24 touchdowns and one interception. He also ran for 791 yards and 10 scores.

“I really believe we wouldn’t have beaten Gorman if we hadn’t had the adversity throughout the year,” Muraco said. “We didn’t know who the quarterback was going to be. We had four competing, and all of them are good. Daniel rose to the top, and if we had played lesser teams and gotten some wins, I don’t know that Daniel would have gotten the opportunity to show what he could do.”

Britt was a difference maker in the monumental win over Gorman, hitting 14 of 18 passes for 153 yards and a touchdown and rushing for 115 yards and a score on 19 carries.

After beating Gorman, the Patriots had a new problem. Matavao had called the game against the Gaels Liberty’s Super Bowl. How does a team get back up for another game the next week after winning the Super Bowl?

For Muraco, it was reminding the Patriots the ultimate goal of a state championship wasn’t finished and that he’d had strong teams go to Reno and lose.

“Coach Muraco is strict. We had a nice little celebration Saturday and Sunday, but it was back to business after that,” Matavao said. “We had to go up and play in the cold, and Vegas kids and Polynesians don’t know anything about cold like that.”

It took awhile for the Patriots to get their footing against Bishop Manogue, but they reeled off 28 straight points to make up for their slow start. Britt threw only eight times and completed five of them, but four went for touchdowns.

The Patriots churned out 347 yards rushing, led by Zyrus Fiaseu’s 171 yards and a score on 15 carries.

Muraco was confident the Patriots were the better team when they met Centennial in the state championship game, but there were still some pregame nerves. It took three plays from scrimmage to settle those down.

That’s when Britt hit Corey Hebert for a 46-yard touchdown pass 58 seconds into the game, and Liberty was off and running. Fiaseu ran for 134 yards and two scores, and the defense intercepted four passes.

“The captains, especially AJ and Toa Tai, they’re Patriots to the core,” Muraco said. “They weren’t going to let negative things creep into the program. They held the kids to a higher standard. They were dialed in, where I didn’t have to be on top of them to show up for weight training or to get good grades. They rallied around each other, and I’ll forever be thankful and grateful for all the kids and coaches that helped make it happen.”