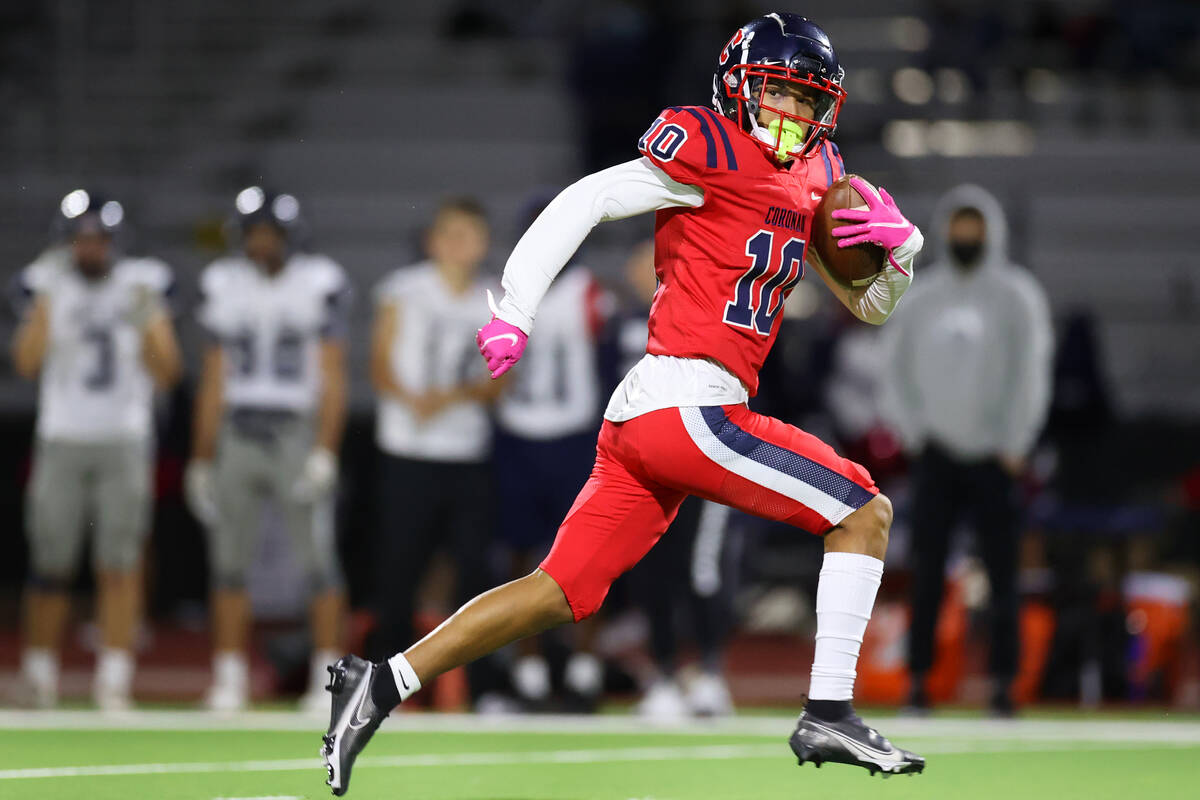 Coronado's Matthew Hunt (10) runs the ball after a catch for a touchdown against Shadow Ridge in the second half of a football game at Coronado High School in Henderson, Friday, Oct. 8, 2021. (Erik Verduzco / Las Vegas Review-Journal) @Erik_Verduzco

All games at 6 p.m. unless otherwise noted

This game likely will decide the Class 4A Sky League representative, which will be especially important when the playoffs begin. Neither team wants to meet Silverado in the postseason sooner than necessary.

Coronado (5-1, 2-0 league) won last season’s meeting 25-21, but this game is at Shadow Ridge (6-1, 2-0). Both teams are hot. Coronado outscored its past two opponents by a combined 96-0. Shadow Ridge is on a five-game winning streak in which its closest game was decided by 13 points.

This matchup also is important for 4A playoff seeding, with the winner the expected Mountain League champion, which puts that team on the side of the Coronado-Shadow Ridge bracket. Not ideal, but also not locked in with Silverado.

Liberty (4-3, 2-0 Mountain League) has been nearly impossible to stop since going to a two-quarterback system. The Patriots again look like the best Class 5A team not named Bishop Gorman, but this is a potential trap game.

Liberty faces a Green Valley team that is 1-5, 0-1 in league, but in the past two games beat Basic 24-10 and had its chances against Desert Pines before losing 28-10. If the Patriots play as they have, it won’t be much of a contest. But Green Valley can make them sweat a little if the Patriots aren’t careful.

Will someone finally give Silverado (6-0, 2-0 Desert League) a game? Probably not. The Skyhawks are simply on another level from their 4A brethren. Cheyenne (3-4, 0-2) doesn’t exactly enter on a roll, either, having lost both league games by a combined 72-15.

The Desert Shields understand the challenge in front of them. If they could delay the running the clock until the second half, that in itself would be a victory.

Games at Gorman (6-1, 2-0 Desert League) begin an hour later than most because the Gaels don’t have to adhere to Clark County School District kickoff start times. All the later start does is delay the inevitable.

Maybe Gorman should move its games up to 6 p.m. and allow its supporters to truly begin the weekend more quickly. Those who support Legacy (2-5, 0-2) probably would appreciate the gesture.