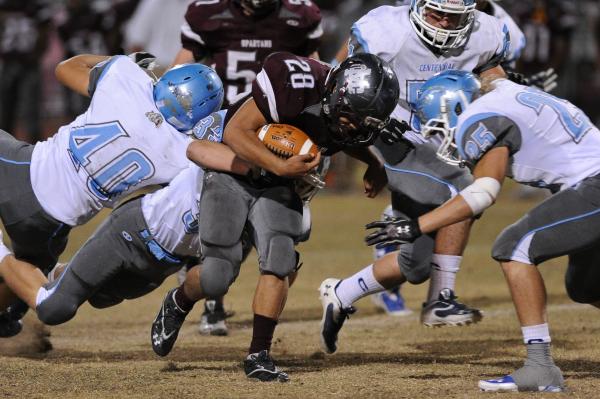 Things have changed quickly for Cimarron-Memorial’s football team. Its game plan will not.

The Spartans were 5-0 after opening Southwest League play with a 34-21 win over Desert Oasis on Oct. 11.

But back-to-back losses, including a 20-0 home defeat against Centennial last week, have dropped Cimarron into fourth place in the league heading into Friday’s 7 p.m. game at third-ranked Legacy.

“It’s the same old plan,” running back Michael Barnson said. “Normal stuff. We’re not changing nothing up for anybody. Run Cimarron football. That’s all we’ve got.”

“That’s the position we’ve put ourselves in,” Cimarron coach John Parcells said. “Now it’s one game at a time, and every league game is important, and we need this one.”

Parcells said the team shot itself in the foot with turnovers against Centennial. The Spartans outgained the Bulldogs 253-222 and ran 78 plays compared to 38 for Centennial. But four interceptions and a fumble derailed the offense.

“We had a lot of turnovers on their half of the field,” Parcells said. “We had the time of possession and amount of plays and all that, but we’d take it down there and then turn it over, and you’re never going to beat anybody that way.”

Legacy’s defense will provide another test for Cimarron. The Longhorns have posted two shutouts, including one against No. 4 Arbor View, and have a physical defensive front led by 6-foot-3-inch, 275-pound Zach Lurgis (37 tackles, four sacks) and 5-11, 230-pound linebacker Josh Phillips (60 tackles, three sacks).

Cimarron has just two players on its roster who weigh 250 pounds or more and eight who check in at 215 or more. Legacy has 10 players who weigh 250-plus.

The senior has been the offensive workhorse, carrying the ball 183 times for 1,125 yards and seven touchdowns.

“They’re a physical team. We need to strive to win the battle up front at the line of scrimmage,” Parcells said. “Our backs have shown if you give them a little crease, they can make something good out of it.”

And Barnson believes the Spartans are ready to put the losing streak behind them.

“It’s like any other loss,” Barnson said. “You take it with you, and you keep riding. You always learn from losing.”