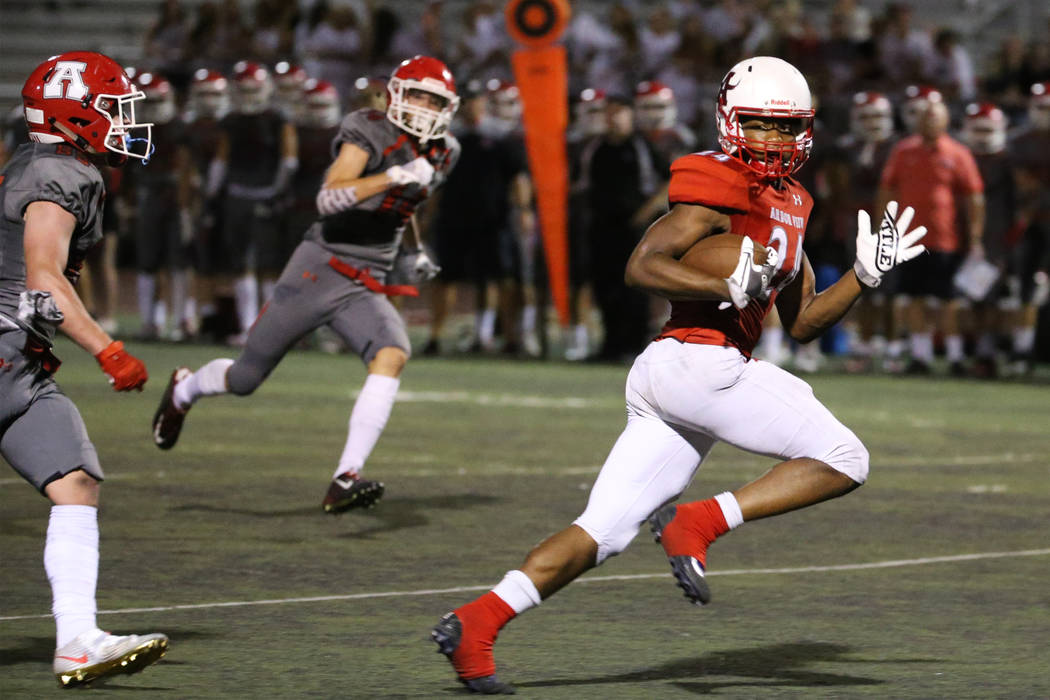 The Class 4A Northwest League race begins this week and headlines the high school slate. Let’s take a look at five of the top matchups.

This Northwest League opener has all the makings of a championship game. Arbor View has five ball carriers with more than 100 yards, paced by Daniel Mitchell’s 498. But its defense has been hit for 34, 41 and 32 points after a shutout in the opener. Centennial has a balanced offense with Colton Tenney’s 495 yards passing and five touchdowns and Jordan Smith’s 449 yards and eight rushing TDs leading the charge.

Both teams are undefeated, but they’ve achieved it in different ways. Desert Pines has cruised past its first three opponents. Two of Foothill’s four games have been decided by one score, including a 29-27 come-from-behind win over Canyon Springs. Both defenses have been tough, with Desert Pines not having allowed a touchdown in its last 10 quarters. Both offenses have the ability to win with the run or pass.

Shadow Ridge is 1-2, but its losses have been by a combined 11 points. The Mustangs have completed four passes all season and have rushed for 735 yards, and all 10 of their scores have been on the ground. Cimarron-Memorial has shown a balanced offensive attack, but this Northwest League opener will be its first against a 4A opponent.

Coronado’s offense got off to a slow start in its first season under coach Fred Biletnikoff Jr., with 15 points in its first two games. The Cougars have exploded for 101 points in the two games since, and their defense has held two opponents to less than 10 points. Legacy has been the master of the close finish, and it’s looking for more consistency on both sides of the ball.

Silverado got its Southwest League season started with a 36-28 win over Durango last week. Aginae Cunningham has emerged as one of the valley’s top rushers with 708 yards and seven touchdowns. He will need to be at his best for the Skyhawks to have any chance to pull the monumental upset. The Gaels averaged 49 points in their six league games last season.