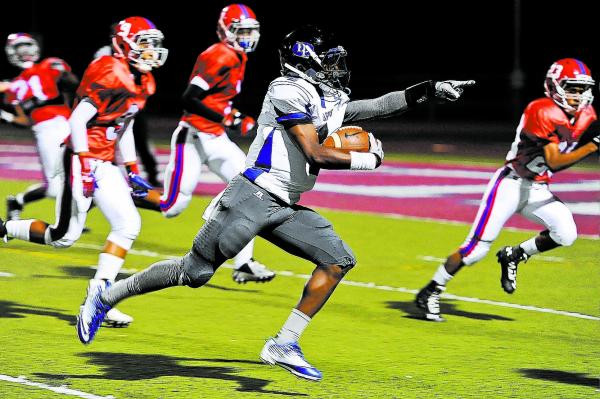 Desert Pines Tim Hough (4) points to the end zone in route to a 32-yard touchdown score against Valley this season. Hough has committed to play at UNLV.

Tim Hough didn’t get as many touches as the other top wide receivers in the area. But the senior at Desert Pines still caught the eye of UNLV’s coaching staff.

Hough was one of the valley’s top playmakers this season, and the 6-foot, 185-pounder made an oral commitment this week to play for the Rebels. Hough’s commitment is nonbinding, and the first day he can sign a national letter of intent is Feb. 5. UNLV’s coaches cannot comment until that time.

“I just wanted to get it off my shoulders and play ball at the next level. There was no use waiting,” Hough said Tuesday. “Playing ball here, I know I’ll have fans that support me coming from Desert Pines.”

Hough said he chose the Rebels over interest from Boise State and Colorado. UNLV was his lone scholarship offer.

Hough finished his senior season with 35 receptions for 760 yards (21.7 yards per catch) and 11 touchdowns as Desert Pines went 9-2. Nearly half of his catches came in two of the Jaguars’ biggest games.

Hough finished with 10 receptions for 213 yards and two touchdowns, including the game-winner with three seconds left, in a 35-32 victory Oct. 11 at Virgin Valley. He had six catches for 187 yards and three scores in the Jaguars’ 48-41 loss at Faith Lutheran in the Division I-A state quarterfinals.

“There’s only one football, and we had a lot of playmakers. But when we really needed it, he was our guy,” Desert Pines coach Tico Rodriguez said. “He’s definitely a kid that wants to work and get better and improve. He just loves football. He’s a special talent. I think UNLV is a good fit for him.”

Hough made an unofficial visit to UNLV last month and was in the Rebels’ locker room after their 39-37 victory over Hawaii on Oct. 12. He said he was excited by the progress the Rebels (6-5) have made under fourth-year coach Bobby Hauck.

“I liked the atmosphere,” Hough said. “I’m a team player, and I can bring speed and being able to make big plays when we need it.”