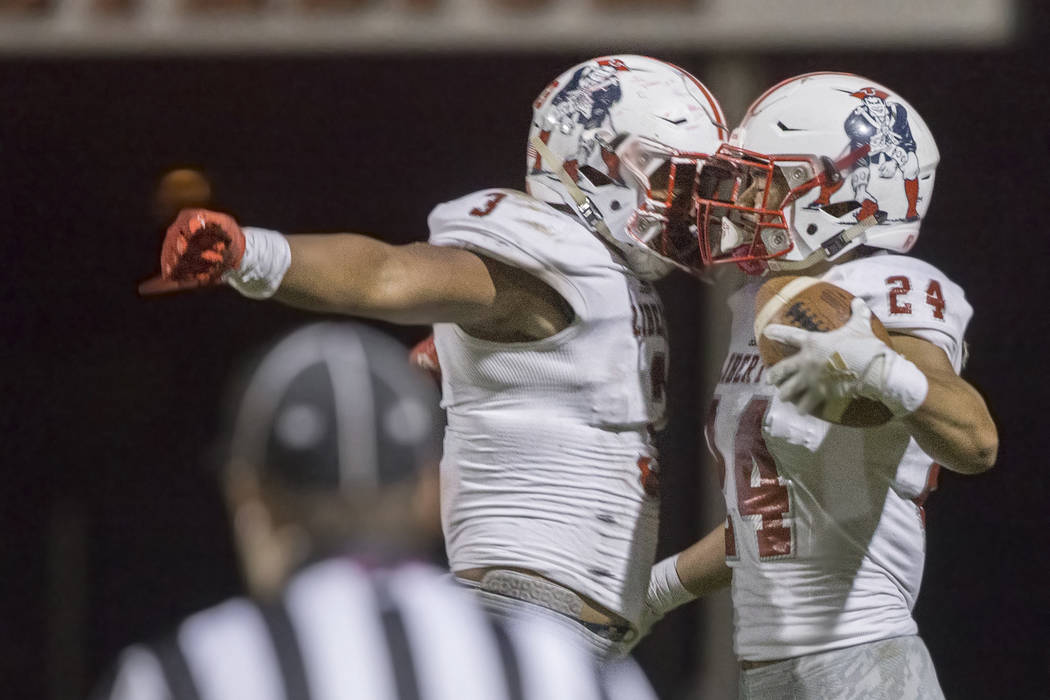 Liberty junior linebacker Zephania Maea (3) and senior safety Lehi Ausage (24) celebrate after Ausage returned an interception for a touchdown in the first quarter during the Patriots road game with the Chaparral Cowboys on Friday, Oct. 4, 2019, at Chaparral High School, in Las Vegas.(Benjamin Hager/Las Vegas Review-Journal) @benjaminhphoto

These teams don’t have to look at any comparative scores to see how they match up. They’ve already met once and on the same field. Liberty won the first meeting 38-0 on Oct. 18, part of a six-game winning strreak. That was the start of a three-game losing streak that was stopped by a 20-7 win over Silverado to begin the Desert League playoffs last week.

Green Valley is on a four-game winning streak since a 59-0 loss to Liberty on Oct. 10, including a 34-6 win over Durango to open the Desert League playoffs. Bishop Gorman has won nine straight since an early 31-19 loss to St. Louis in Hawaii. The Gaels had a streak of four straight shutouts snapped in a 52-7 win over Coronado last week. They’re averaging 60 points per game against valley foes.

Centennial won its first league title since 2002 with a 9-1 mark, largely thanks to its turnover margin. The Bulldogs are plus-19 in that area, led by QB Colton Tenney having throwing only two interceptions and safety Ronaven Mokaio having intercepted seven passes. Legacy has dropped five games by a combined 27 points, including a 22-19 loss last week to Canyon Springs.

It’s an old rivalry between traditional powers and a contrast in styles. Las Vegas uses its speed to spread the field and cause matchup problems, while Palo Verde prefers to get physical with its double-wing attack. Ja’Shawn Scroggins has thrown a valley-best 37 TD passes for Las Vegas, while Charron Thomas has 1,160 yards and 12 TDs rushing to lead Palo Verde.

No 11-man team in the valley finished the regular season with a perfect record other than Desert Pines. The Jaguars are a complete team that has scored 48 points per game and allowed less than nine on average. Faith Lutheran is looking to avoid its first losing season since 2011. The Crusaders have struggled with injuries, which has led to inconsistency.

Both teams enter with plenty of confidence. For Arbor View, that’s based on having won six straight games and last year’s Mountain Region championship. For Canyon Springs, it’s a three-game winning streak on the heels of starting 0-6 that has the Pioneers feeling good about themselves.