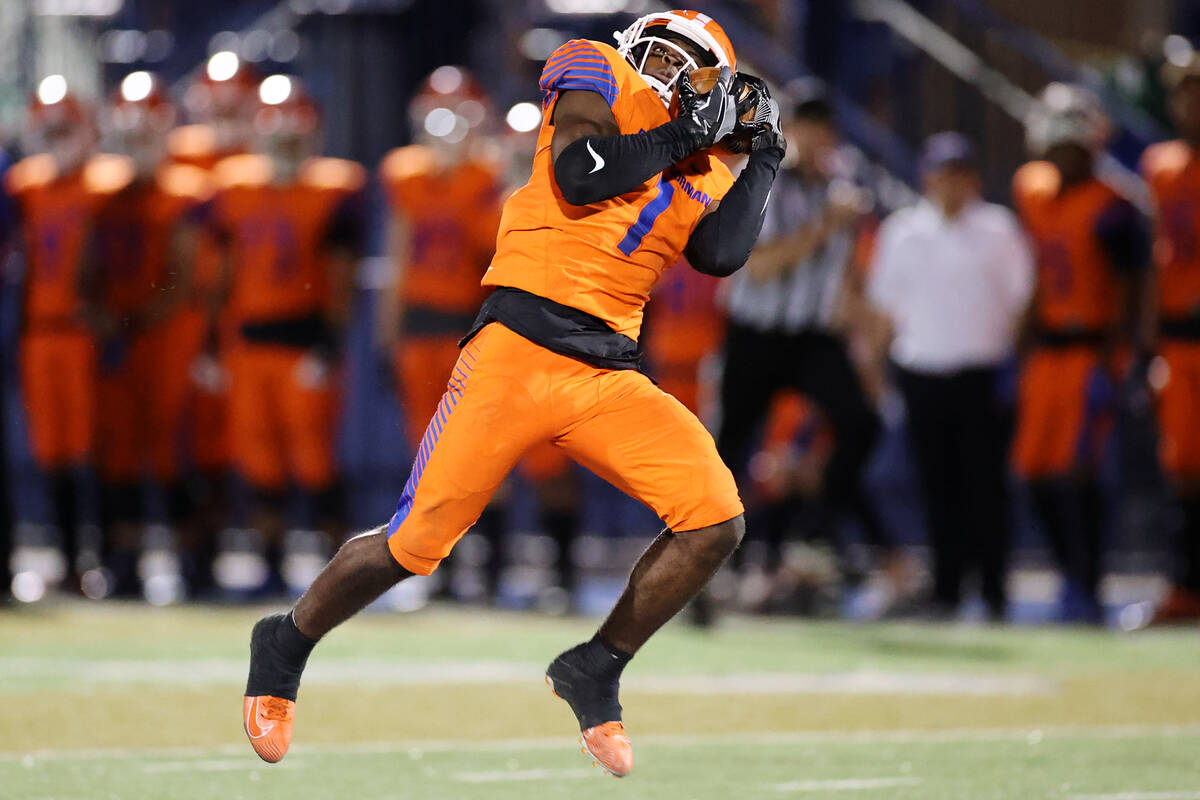 Bishop Gorman's Zachariah Branch (1) runs the ball for a touchdown after a catch in the fourth quarter of a football game against Lone Peak at Bishop Gorman High School in Las Vegas, Saturday, Sept. 11, 2021. (Erik Verduzco / Las Vegas Review-Journal) @Erik_Verduzco

The high school football season hit the midway point last week, and it’s safe to say there haven’t been many like it.

It hasn’t been the normal season many were hoping for, but fall football is back. League play begins for Class 5A, 4A and 3A teams this week, which means the playoff picture will come into focus in the next five weeks.

But before that starts, let’s look back at highlights from the first five weeks.

Story of the first half

There has been one constant — change.

Most teams have had their season affected by any number of issues. COVID-19 testing and eligibility issues early in the season forced teams to play short-handed and, in some cases, cancel their games.

Most games at Clark County School District venues are being played at 6 p.m. instead of their usual 7 p.m. start time, a change that came a week after a fight that involved gunfire in the Desert Oasis parking lot.

“We’re handling it week to week,” Shadow Ridge coach Travis Foster said. “We’ve been shown things can change at any time, but we’re just happy we’re getting to play.”

Shadow Ridge experienced a cancellation two weeks ago when it was scheduled to play Palo Verde. The Mustangs are far from alone. There have been 100 football games played and 31 canceled involving teams in Southern Nevada, according to the Nevada Interscholastic Activities Association.

Three games that would have been canceled were saved because teams were able to find a new opponent, such as last week when Sierra Vista was swapped for Spring Valley to face Clark a day before the game.

Foster said the cancellations are out of everyone’s control, so he has the Mustangs focused on what they can control.

“As of right now, we have a game on Friday,” he said. “That could change in an hour or a day, but we’re getting ready for that.”

Team of the first half

There are a number of ways to go. Bishop Gorman played the most difficult schedule and was a minute from going 4-0 against out-of-state foes, including two games against teams ranked in the top 25 nationally. But the Gaels allowed Hamilton (Arizona) to score 18 points in the final 1:05 last week in a 25-24 loss.

Moapa Valley hasn’t played the toughest of schedules, but nobody has been more dominant than the Pirates.

Moapa Valley should be tested against Clark on Oct. 15, but the Pirates and Virgin Valley have a chance to be undefeated when they meet in the Hammer Game on Oct. 22, the final week of the regular season.

Player of the first half

Nineteen catches in four games isn’t an extraordinary total. But what Gorman wide receiver Zachariah Branch has done with them has been.

The junior speedster, who set a school record in the spring with a 10.33-second 100-meter dash, has more than 100 yards in all four games, is averaging 24.4 yards per catch and has scored four touchdowns.

One of those proved to be the game-winner in a 21-20 victory over Miami Central (Florida), and his 28-yard score in the fourth quarter last week appeared to put the game away before Gorman’s collapse.

Branch also has one of the best plays of the season, a zigzagging 70-yard punt return for a touchdown in a 35-7 win over Lone Peak (Utah). He was near the sideline and fielded the ball on a hop, gave some ground as he ran all the way across the field before cutting back inside and picking up blockers en route to the end zone. He also caught an 81-yard TD pass from Micah Alejado in the game.