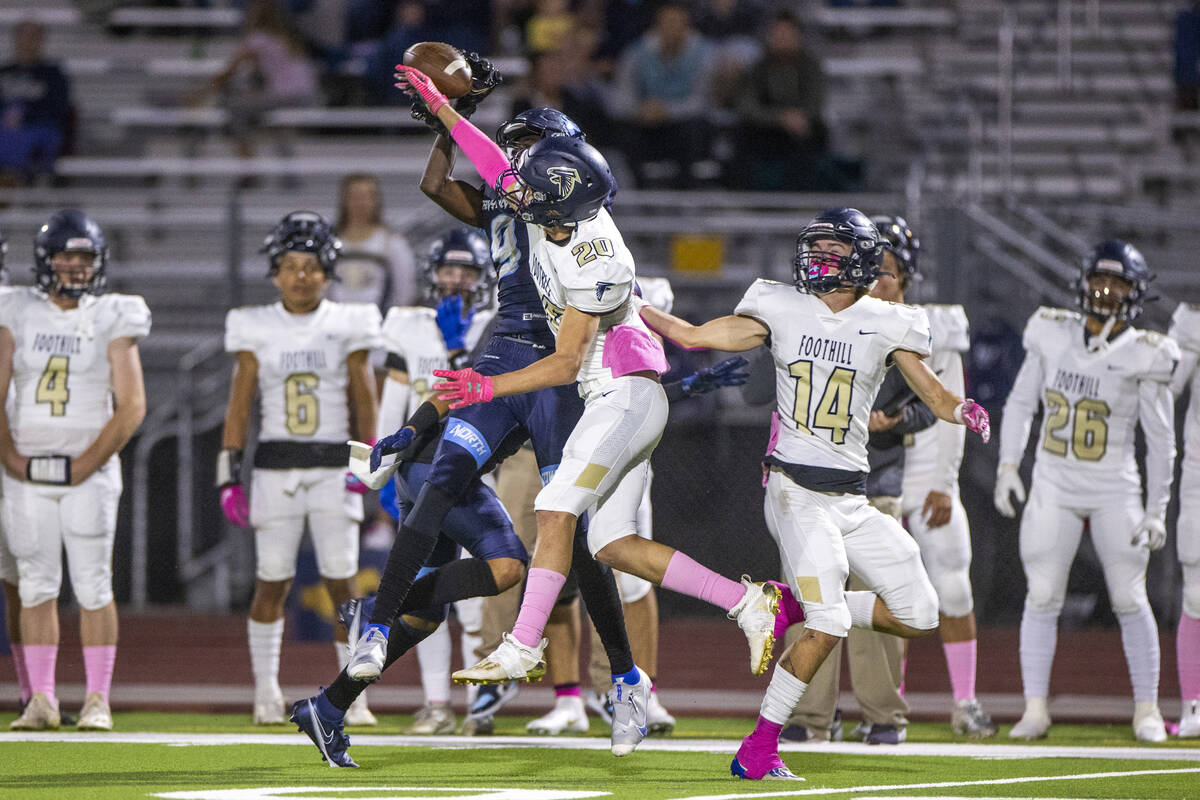 Canyon Springs' Tavian A. McNair (9, left) has a pass knocked away by Foothill's Jason Fisher (20) during the first half of an NIAA football game at Canyon Springs High School on Friday, Oct. 15, 2021, in North Las Vegas. (L.E. Baskow/Las Vegas Review-Journal) @Left_Eye_Images 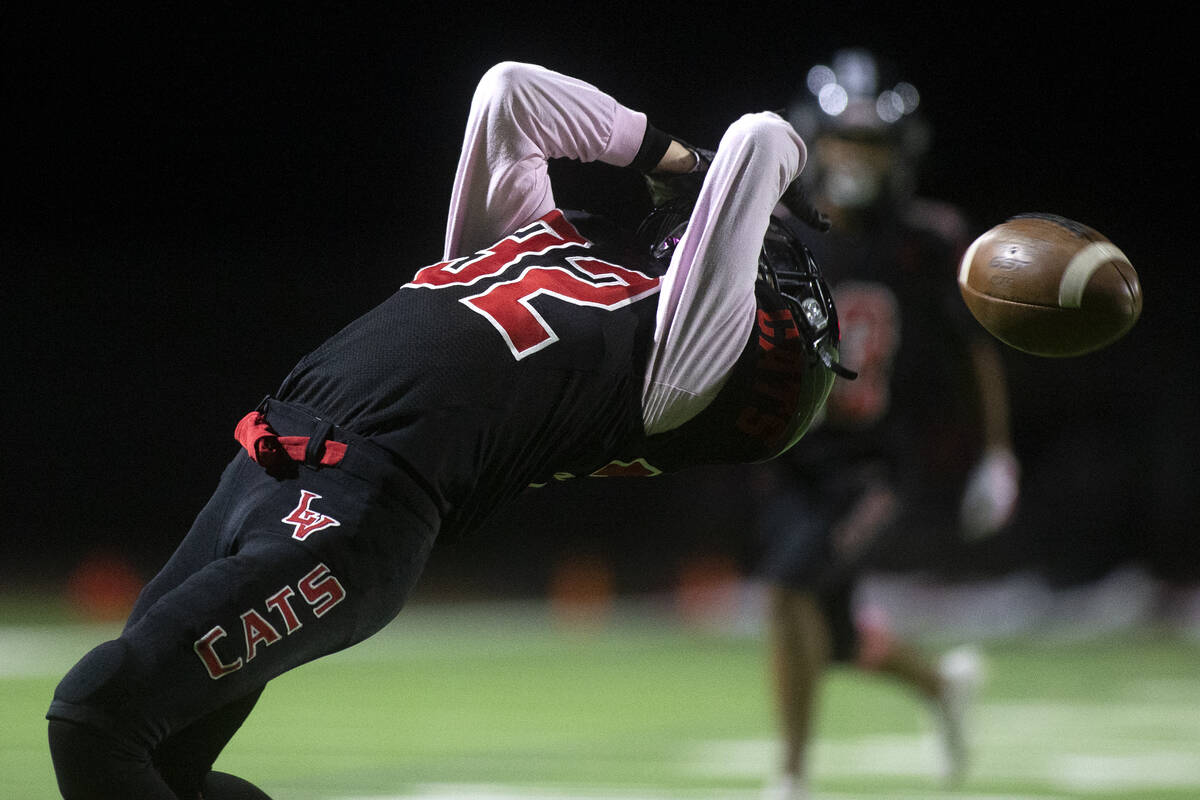 Las Vegas' running back Camden Bradshaw dives backwards but misses a catch during the second half of a high school football game against Durango at Las Vegas High School on Friday, Oct. 15, 2021, in Las Vegas. (Ellen Schmidt/Las Vegas Review-Journal) @ellenschmidttt

With the Hammer Game against rival Virgin Valley looming next week, Moapa Valley tested itself against a strong Class 4A team in Clark on Friday night.

The senior returned the opening kickoff 85 yards for a touchdown, and he also had four catches for 133 yards and two touchdowns and 47 yards rushing to lead Moapa Valley to a 35-28 home win.

Peyton Neilson was 16-for-24 for 242 yards and four touchdowns for the Pirates (8-0). Austin Heiselbetz caught eight passes for 101 yards and a touchdown, and added an interception. Dustin Gordon also had a touchdown catch, and Landon Wrzesinski led Moapa Valley on the ground with 113 yards on 12 carries.

Clark (6-2) led 14-6 in the second quarter after a 1-yard touchdown run from Mason King and a 9-yard scoring burst from D’on Williams and twice pulled within one score in the third quarter.

Lebon Makwashi returned the second-half kickoff 90 yards for a score, and Jaylen Johnson caught a 35-yard touchdown pass from King with five minutes left in the third quarter, but the Moapa Valley defense held steady from there.

Centennial scored first on a field goal after an interception gave it a short field, but the Gators (6-2, 2-1 5A Mountain League) answered on their next drive and never looked back.

The win clinches a playoff spot for Green Valley.

Basic 38, Del Sol 0 — At Basic, the Wolves took out the frustration of losing their first two league games by a combined seven points.

Cimarron-Memorial 27, Chaparral 21 — At Chaparral, freshman E’juwan Carter scored on a 10-yard touchdown run with about a minute left, and the Spartans ended a two-game losing streak.

Carter had 136 yards rushing and also threw a 46-yard touchdown pass for Cimarron-Memorial (3-5, 2-2 4A Desert League), which clinched a playoff berth. Michael Sabina threw for 294 yards and a touchdown for the Spartans.

Desert Oasis 59, Cheyenne 30 — At Desert Oasis, Tyler Stott threw for seven touchdowns and rushed for one to keep the Diamondbacks unbeaten in league play.

Elijah Darwin had 250 yards and four touchdowns receiving for Desert Oasis (7-1, 4-0), which will meet Silverado for the 4A Desert League title next week.

Cheyenne (2-6, 1-3) needs a win next week against Chaparral to claim a playoff spot.

Shadow Ridge 54, Mojave 0 — At Mojave, the Mustangs scored 27 points in the first quarter and 20 in the second.

Shadow Ridge (6-2, 3-1 Sky League) stayed in second place in the league and will close the regular season against Spring Valley.

Mojave (3-4, 0-4) was eliminated from playoff contention.

Bonanza (1-6, 0-4) started the scoring with a Christopher Thomas interception return for a touchdown, but was eliminated from playoff contention.

Donavyn Pellot caught two touchdown passes, and Bryson Tunnell, Marcus Tunnell, Jaden Thrower and Blayke Michael had one apiece for Silverado (8-0, 4-0 Desert League). John Agounke and George Hearon ran for touchdowns for the Skyhawks, who will meet Desert Oasis for the league title next week.

Pahrump Valley 40, Eldorado 0 — At Eldorado, the Trojans used a powerful running game to win the 3A Desert League title.

Pahrump Valley (3-3, 3-1) has won three straight after an 0-3 start and will close the regular season with a nonleague game against Valley.

Eldorado (3-5, 2-1) has clinched a playoff berth and will meet SLAM Nevada for second place next week.

Virgin Valley 52, Western 0 — At Virgin Valley, Gavin Brown was 13-for-18 for 184 yards and four touchdowns to four receivers, and the Bulldogs remained unbeaten in league play.

Benson Leavitt, Jimmy Kelly, Cameron Perkins and Jared Jenson had a touchdown catch, and Kellen Dugan ran for 100 yards on 14 carries for Virgin Valley (7-1, 3-0). The Bulldogs will meet Moapa Valley in the Hammer Game next week to decide the Mountain League title.

Western (1-7, 0-3) was eliminated from playoff contention.

Needles 34, Lake Mead 6 — At Needles, the Mustangs scored 26 unanswered points to put away the Eagles and stay undefeated.

Needles (5-0, 5-0 Class 2A Southern League) will meet The Meadows in a game that could decide the league title next week.

Lake Mead (2-4, 1-4) pulled within 8-6 in the second quarter before the Mustangs took control.

Pahranagat Valley 62, Round Mountain 0 — At Pahranagat Valley, Carson Hansen had an 85-yard kickoff return and a 55-yard punt return for scores in the first 2:06 for the Panthers.

Gage Davis ran for two touchdowns to help Pahranagat Valley (5-1, 2-0) to a 38-point first quarter. The Panthers will meet Tonopah in a clash of league unbeatens next week.