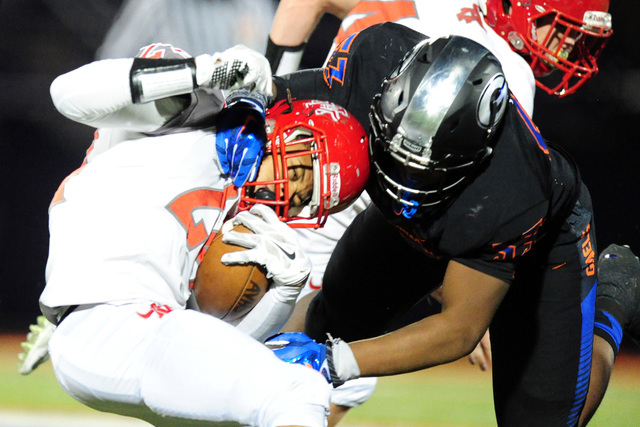 When Tony Sanchez took over as UNLV football coach before last season, he was determined to keep the best local players at home. So far, so good.

Bishop Gorman all-state middle linebacker Farrell Hester became the third local player to orally commit early to the Rebels’ 2017 recruiting class, announcing his decision Tuesday night on his Twitter account, where he posted, “Blessed to say that I committed to UNLV!! #turnaround #heyreb.”

The 6-foot, 235-pound Hester, who led the Gaels in tackles as a junior last season with 97, joins Desert Pines quarterback Marckell Grayson and Desert Pines running back Isaiah Morris in committing to the Rebels.

Hester made his official visit to UNLV in March and said he was especially impressed by Sanchez, his former coach at Bishop Gorman, and Rebels defensive coordinator Kent Baer.

“They just basically made me feel at home. The coaches showed me love and treated me like family,” Hester said. “I just felt good about it. I talked about it with my parents, and all my family is for it. I think I have a good chance of playing, and I really believe Sanchez is turning the whole program around.”

UNLV went 3-9 last season, its first under Sanchez after a stretch of eight two-win seasons in the previous 11 years.

On March 5, Grayson became the first player to commit to the 2017 class. The dual-threat quarterback accounted for 29 touchdowns last season en route to earning honorable mention all-state honors from the Las Vegas Review-Journal.

On March 18th, Morris became the second player to commit to UNLV. He rushed for 1,461 yards and 19 TDs last season for the Jaguars and had 15 catches for 348 yards and four scores.

Hester anchored the Gaels’ linebacking corps, aka the “Lion’s Den,” recording 9½ tackles for loss, four sacks and two interceptions last season while helping Gorman to its second straight mythical national title and seventh consecutive state title. He was an all-state first-team selection by the Review-Journal.