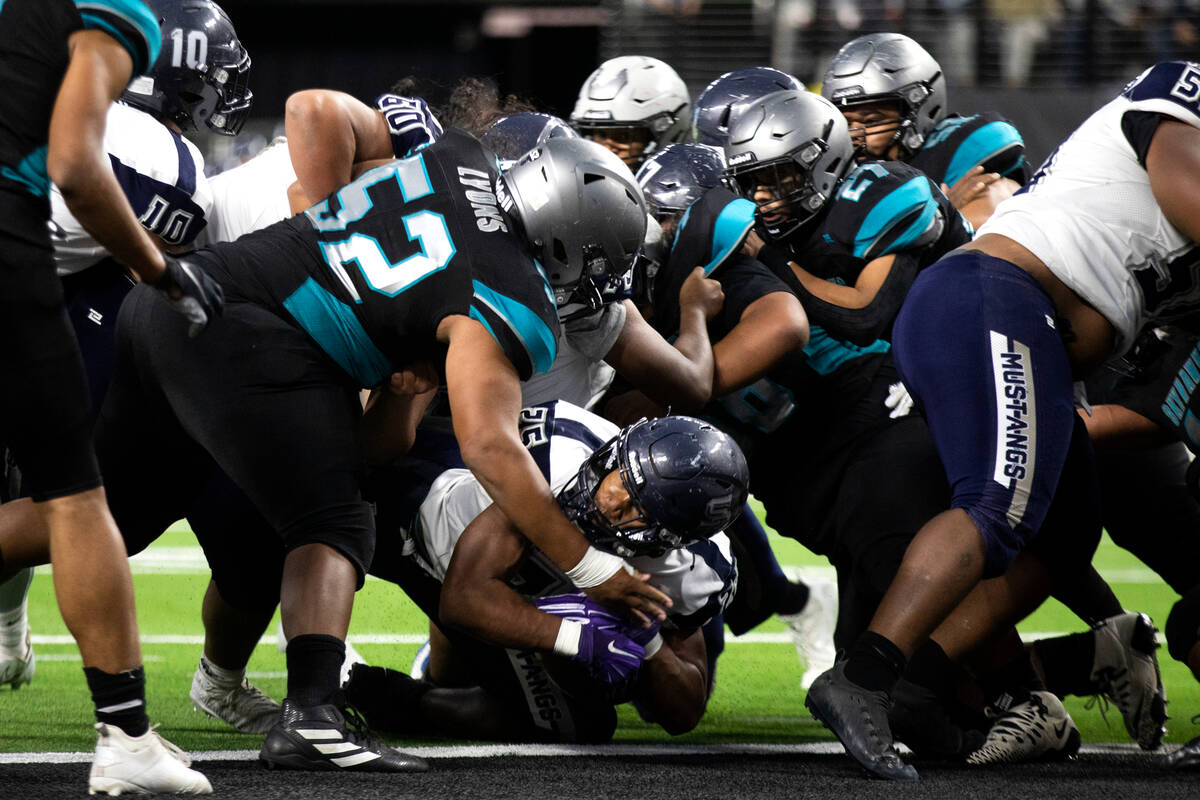 Shadow Ridge running back Jaquieze Holland (25) scores a touchdown as Silverado defenders attempt to tackle him during the first half of the Class 4A football state championship game at Allegiant Stadium on Thursday, Nov. 18, 2021, in Las Vegas. (Ellen Schmidt/Las Vegas Review-Journal) @ellenschmidttt

Shadow Ridge football coach Travis Foster didn’t have to do a lot to motivate his team for this season.

The Mustangs lost last year’s Class 4A state title game 61-27 to Silverado. Foster said his players watching another team celebrate a state championship was all the motivation they needed to get back to the title game this season.

“That’s one of the defining moments in a football career,” Foster said. “Everybody remembers how they felt then and coming to school the next day because we played on a Thursday. They don’t want to repeat that feeling.”

Shadow Ridge (11-1) gets its chance to avenge last year’s loss when it plays Silverado (11-0) at 7 p.m. Monday for the 4A state title at Allegiant Stadium.

The game will be the last of four high school football state title games happening at Allegiant Stadium on Monday, with the first game starting at 9 a.m. Seven of the eight teams are from Southern Nevada.

To prepare for another run to the state title game, Foster said the Mustangs needed to challenge themselves against a step up in competition.

Shadow Ridge played a non-conference schedule with three 5A teams and an out-of-state game in Arizona. Foster said winning wasn’t the main goal, it was to prepare his team for another possible matchup with Silverado.

But Shadow Ridge provided it can play with top competition. It defeated 5A opponents Foothill and Palo Verde and won on the road against Shadow Ridge (Arizona). After an early season loss at Arbor View, the Mustangs have outscored their opponents 482-134 during a 10-game winning streak.

Through the tougher competition, Foster has seen his team showcase its improvements from last season.

“We’re more athletic than we were a year ago,” Foster said. “That helps when you’re playing a team that is as explosive as Silverado is. The offensive line is playing really well, and our defensive line is creating a lot more pressure than we did a year ago.”

Silverado coach Andy Ostolaza said he was expecting Shadow Ridge to be his team’s opponent in the state title game. He believes the Mustangs are the one team in the 4A that matches up with Silverado with the playmakers both teams have.

With the game being on a Monday, Ostolaza said Silverado has benefited from the extra days of rest.

He is also using the extra time to prepare his team for Shadow Ridge’s offense. While the Mustangs run the ball on almost every play, Ostolaza knows they do it really well, and stopping it will be a challenge.

“Going against option teams, you have to stick to your assignment,” Ostolaza said. “Shadow Ridge is even better than they were last year offensively.”

Foster knows taking care of the ball will be key against Silverado, who he said has a knack for scoring on defense and special teams.

Foster said his team is playing confidently and executing at a high level. He said he’s looking forward to getting another shot at Silverado and seeing if the Mustangs’ improvements can lead to a state title.

“We’ve had Silverado in our sights all season,” Foster said. “We knew that at some point we were going to see them. We didn’t know when, but hopefully, we’re able to build up and rise to their level of competition.”