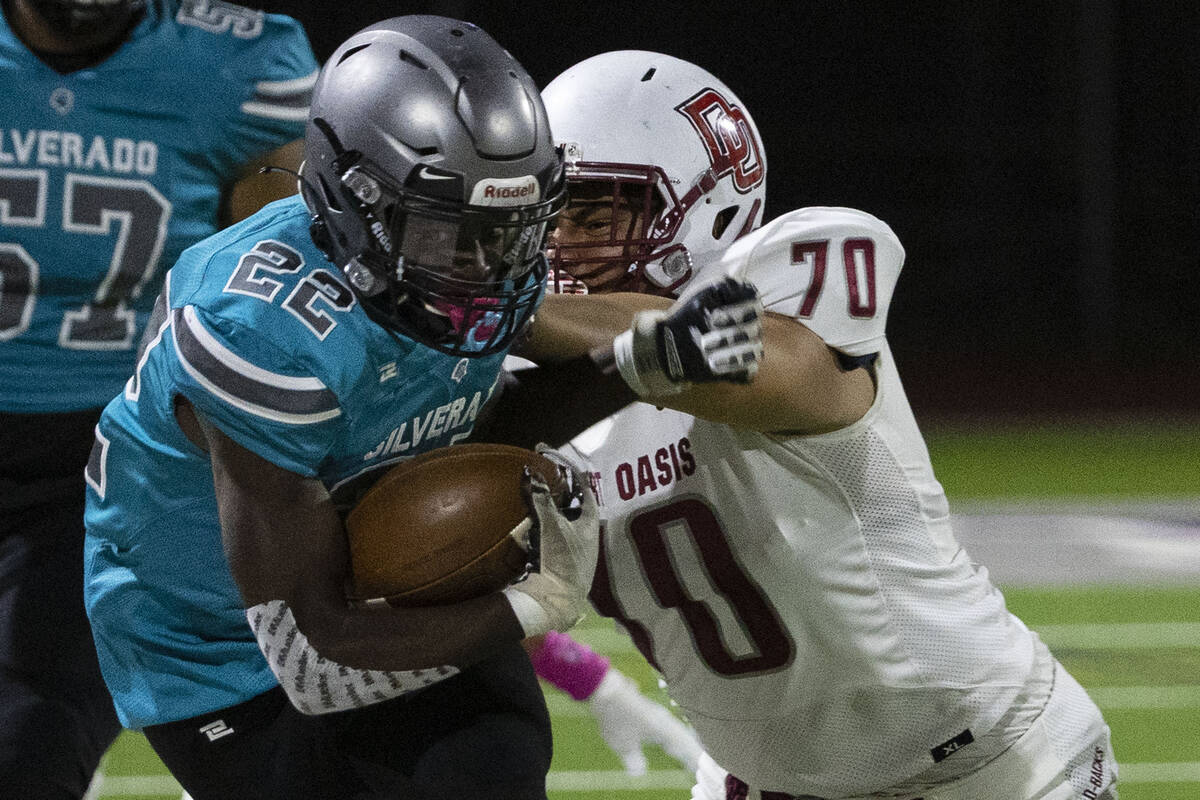 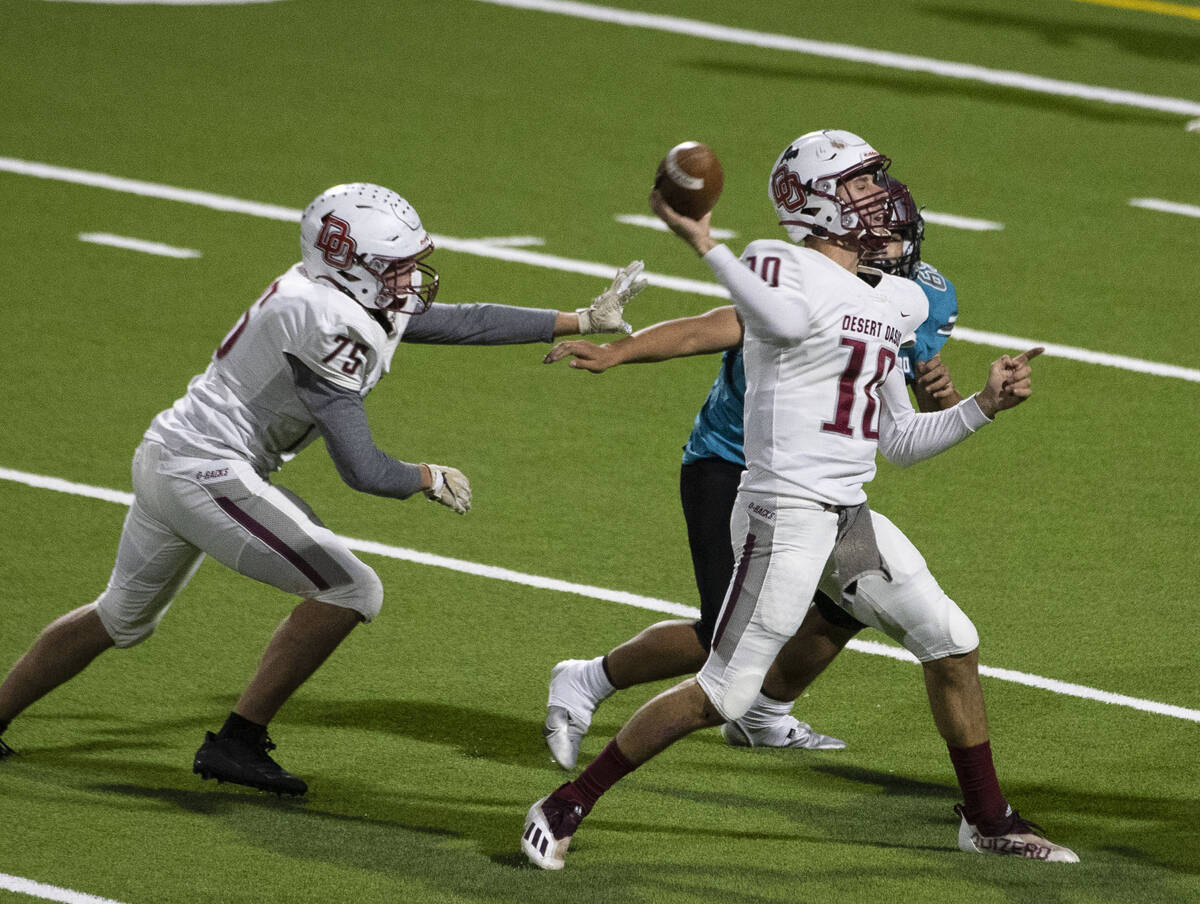 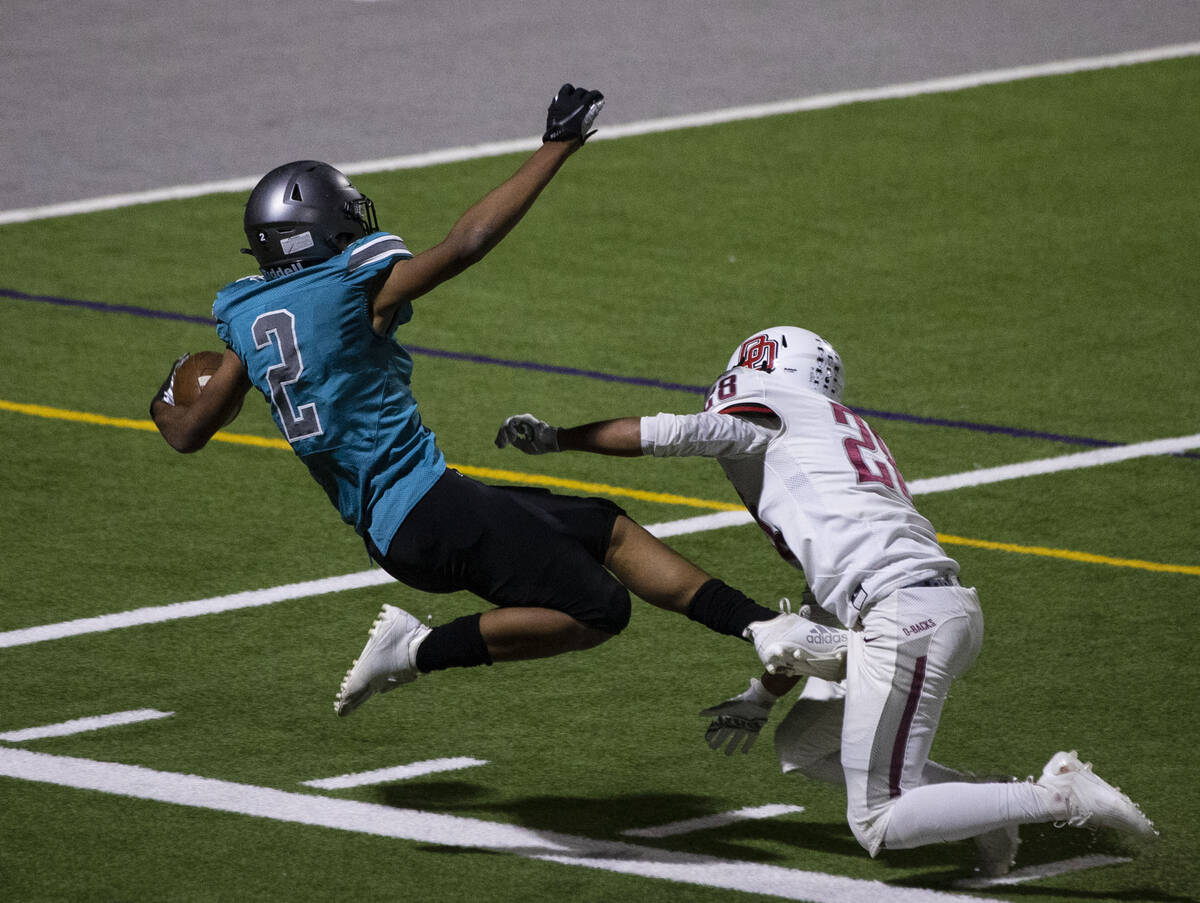 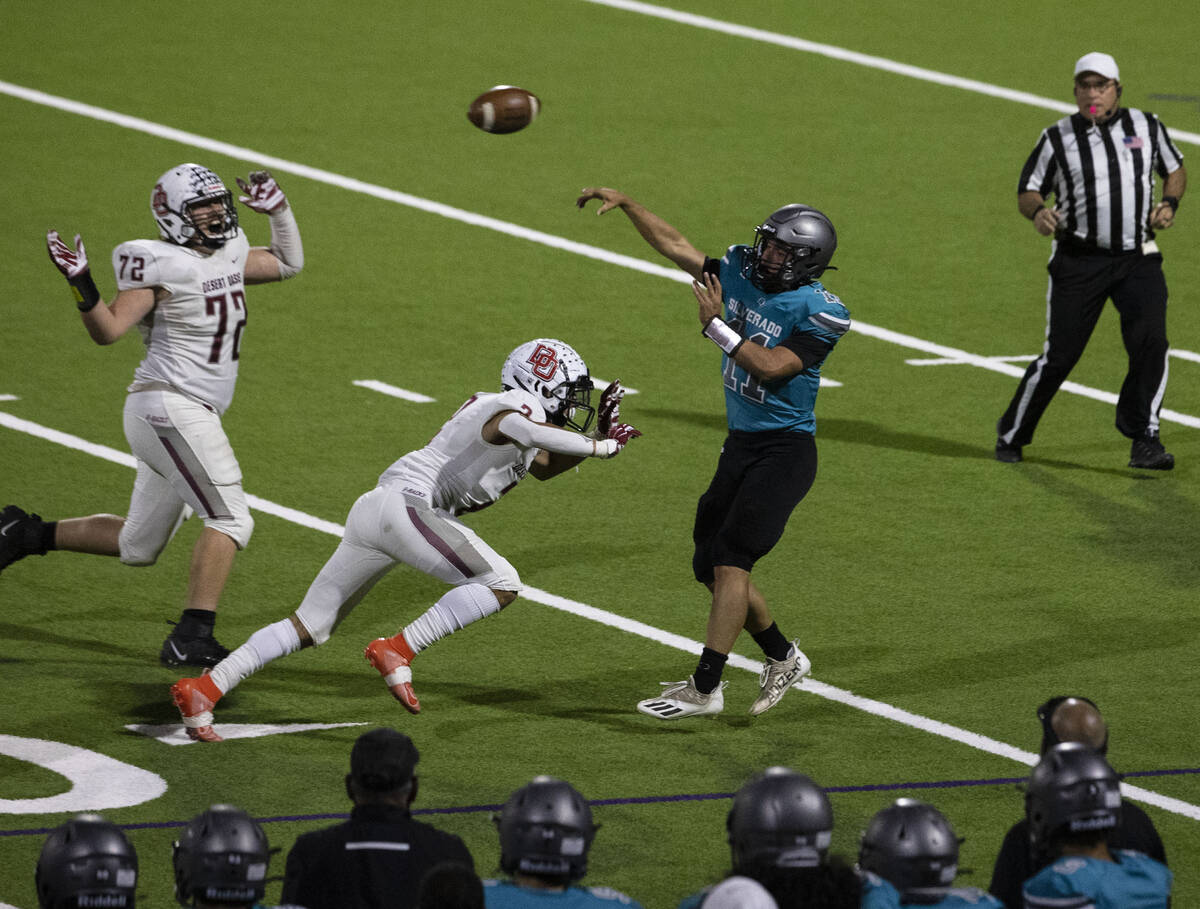 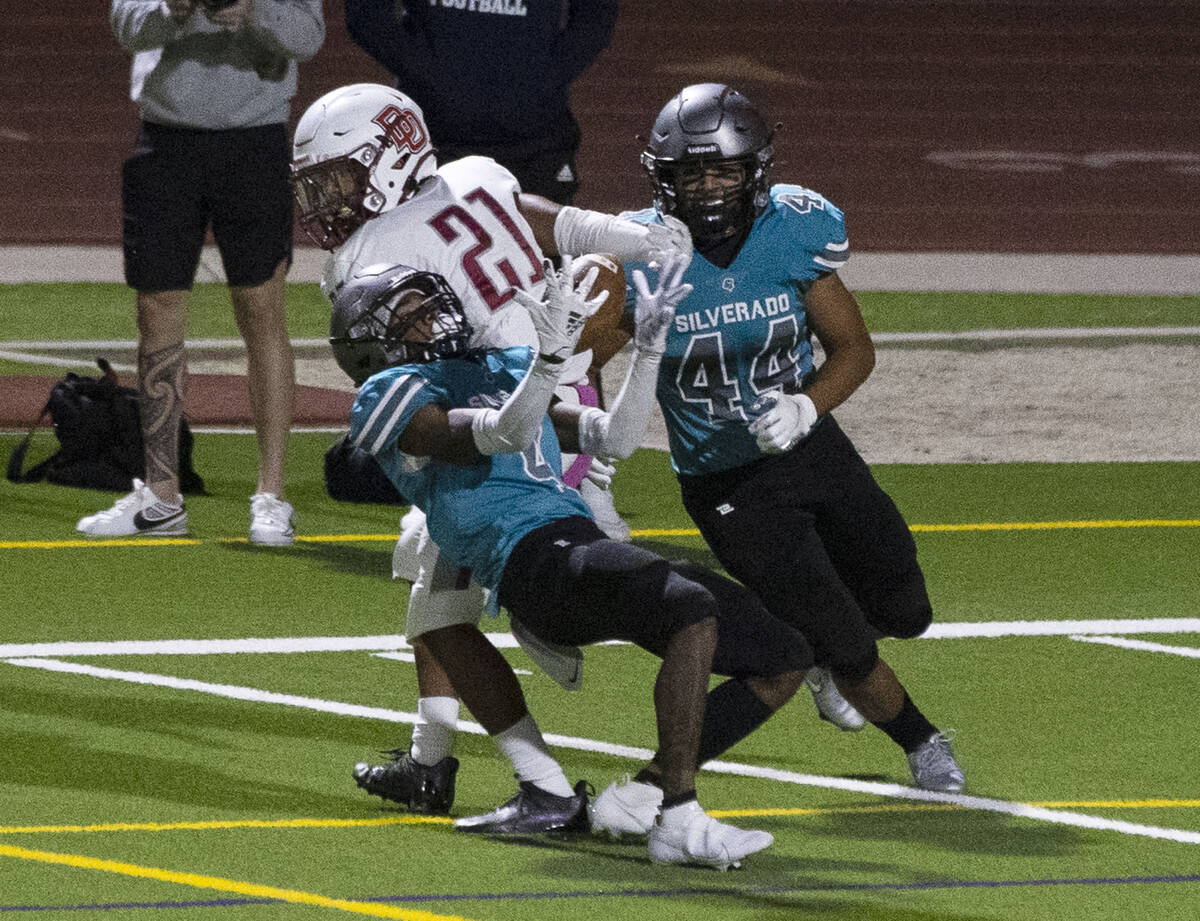 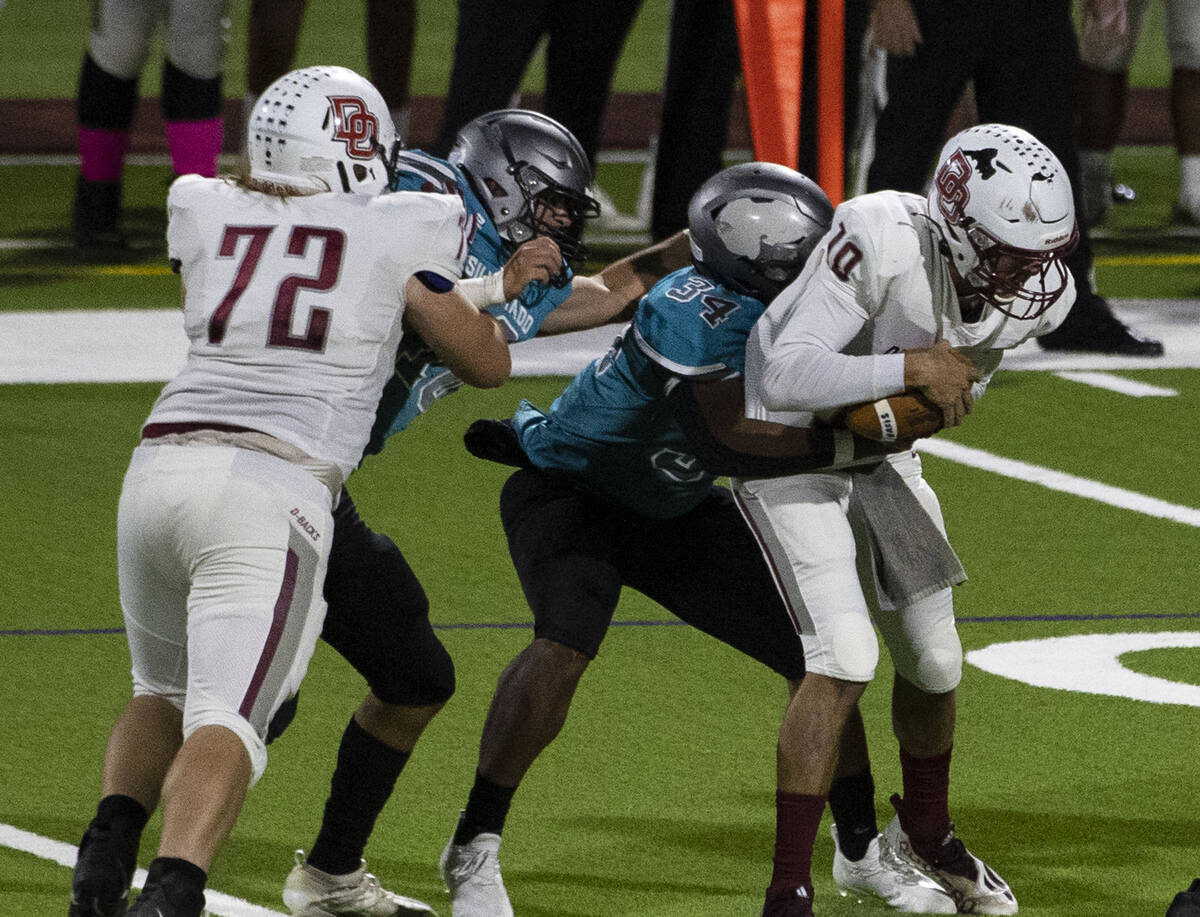 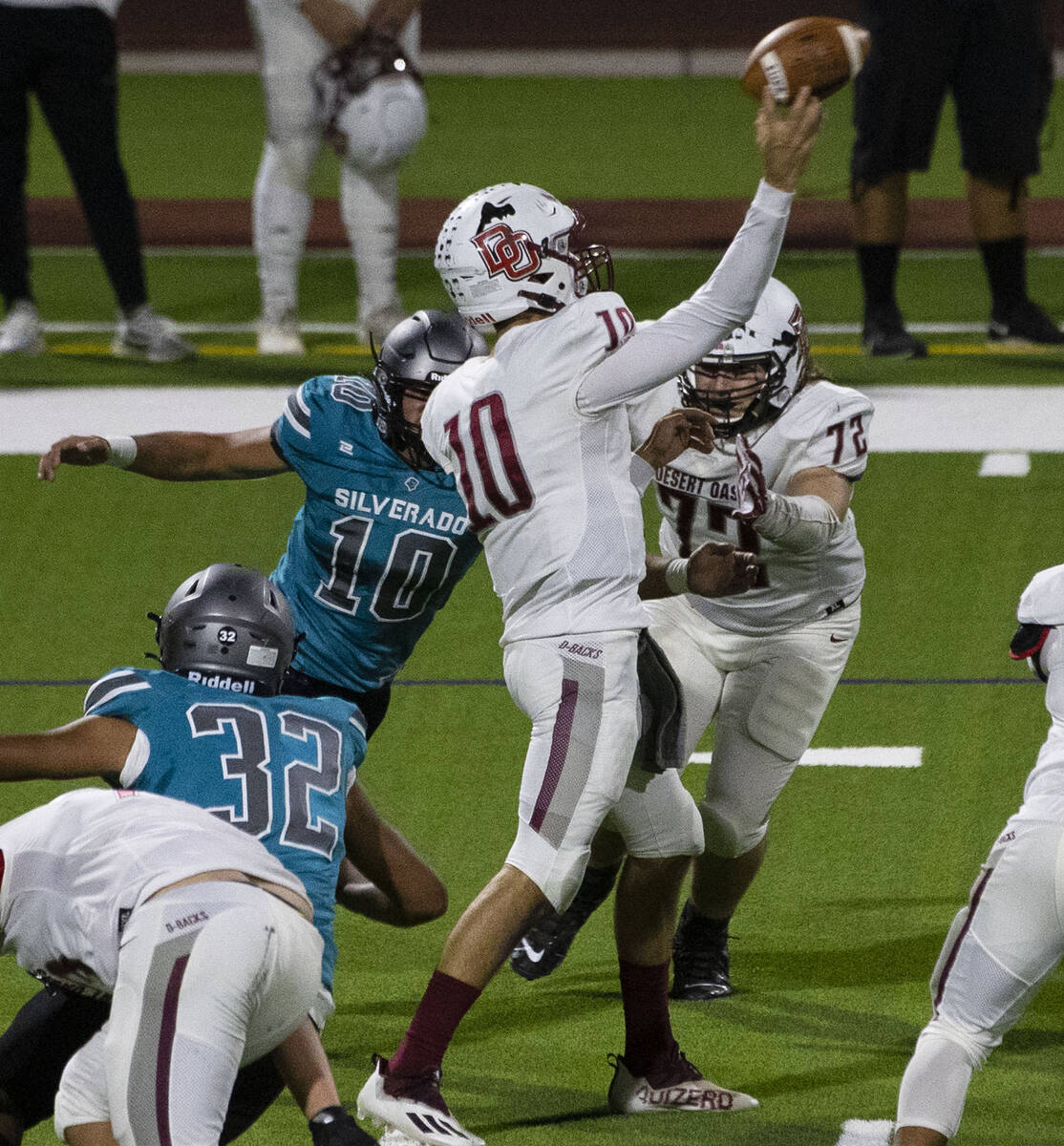 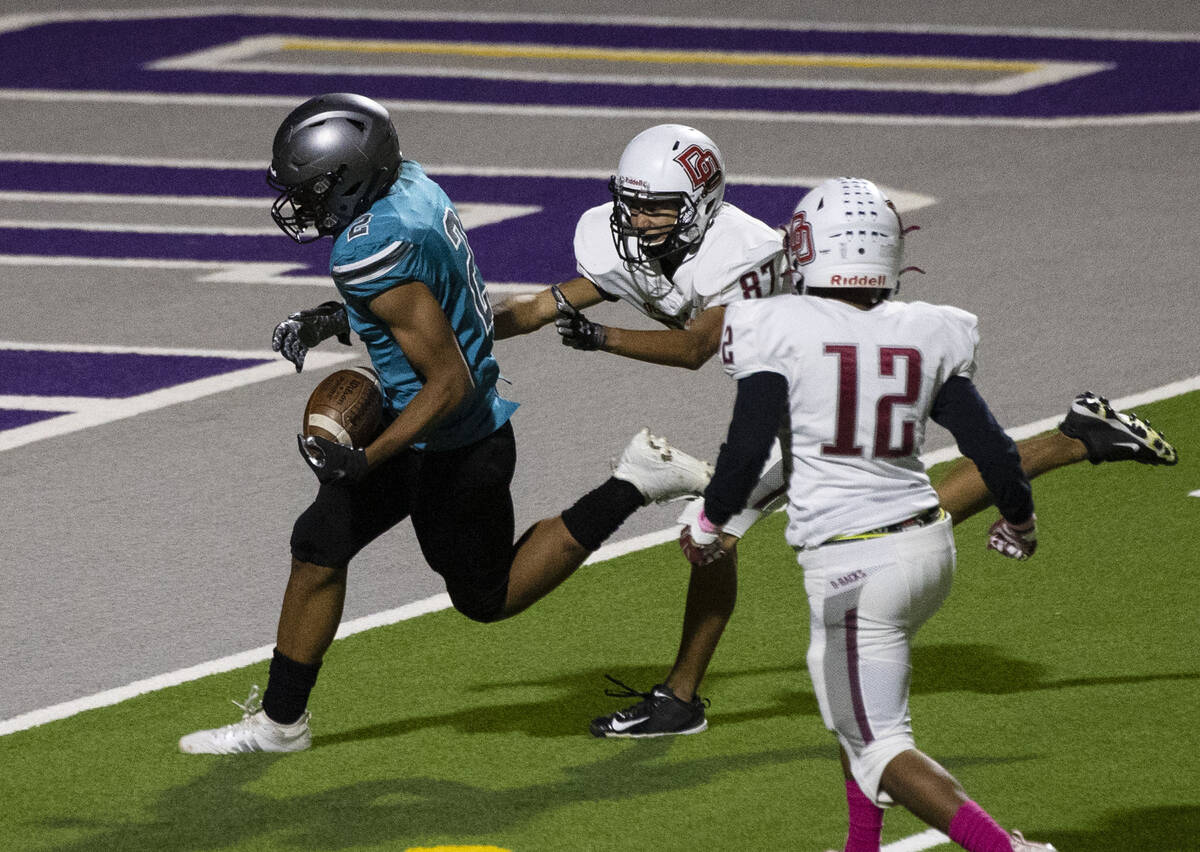 Silverado HighÕs running back Donavyn Pellot (2) runs past Desert Oasis slotback Zachary James (87) and Amare Norman (12) as he scores a touchdown during the first half of a football game at Silverado High School, on Friday, Oct. 22, 2021, in Las Vegas. (Bizuayehu Tesfaye/Las Vegas Review-Journal) @bizutesfaye 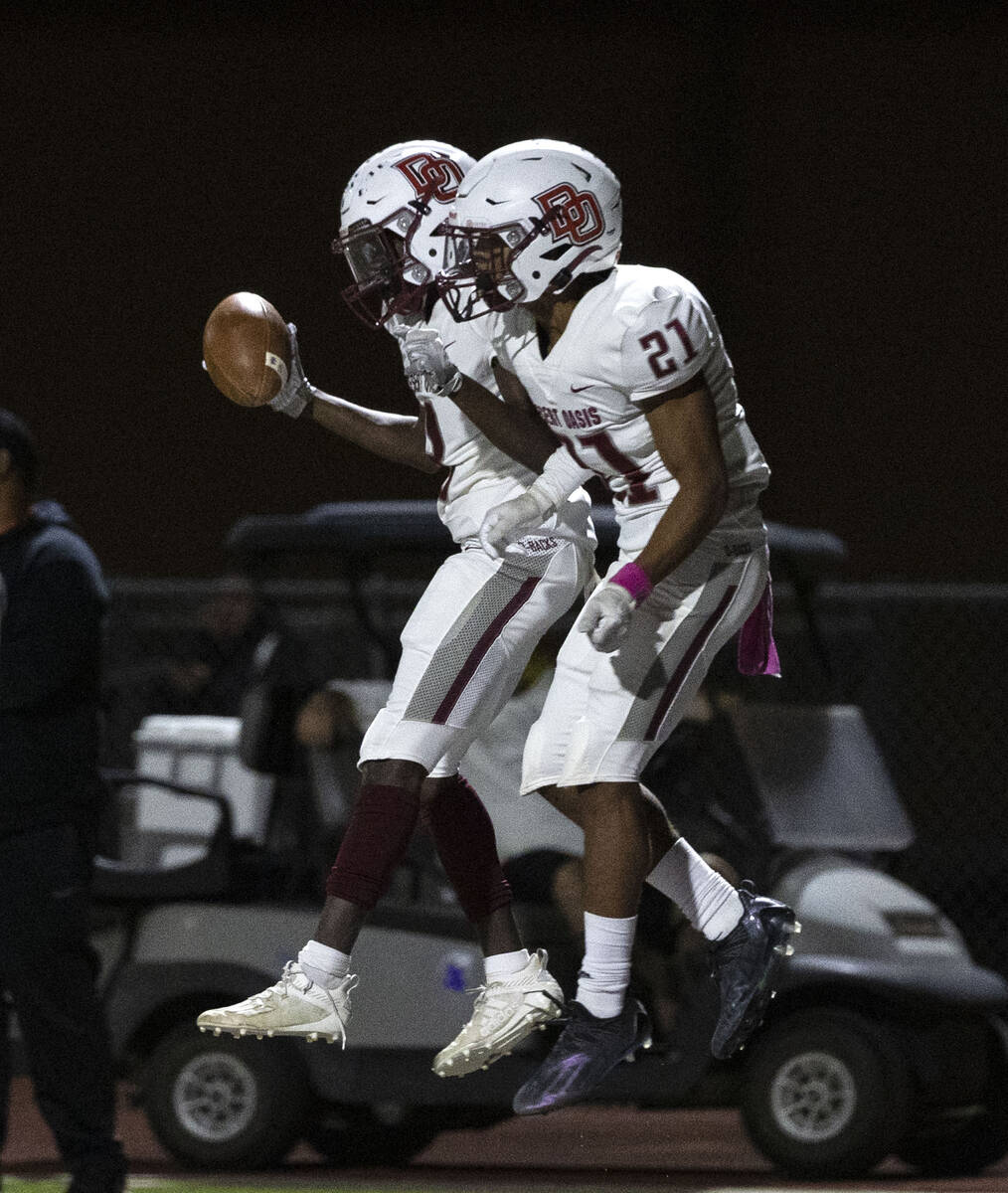 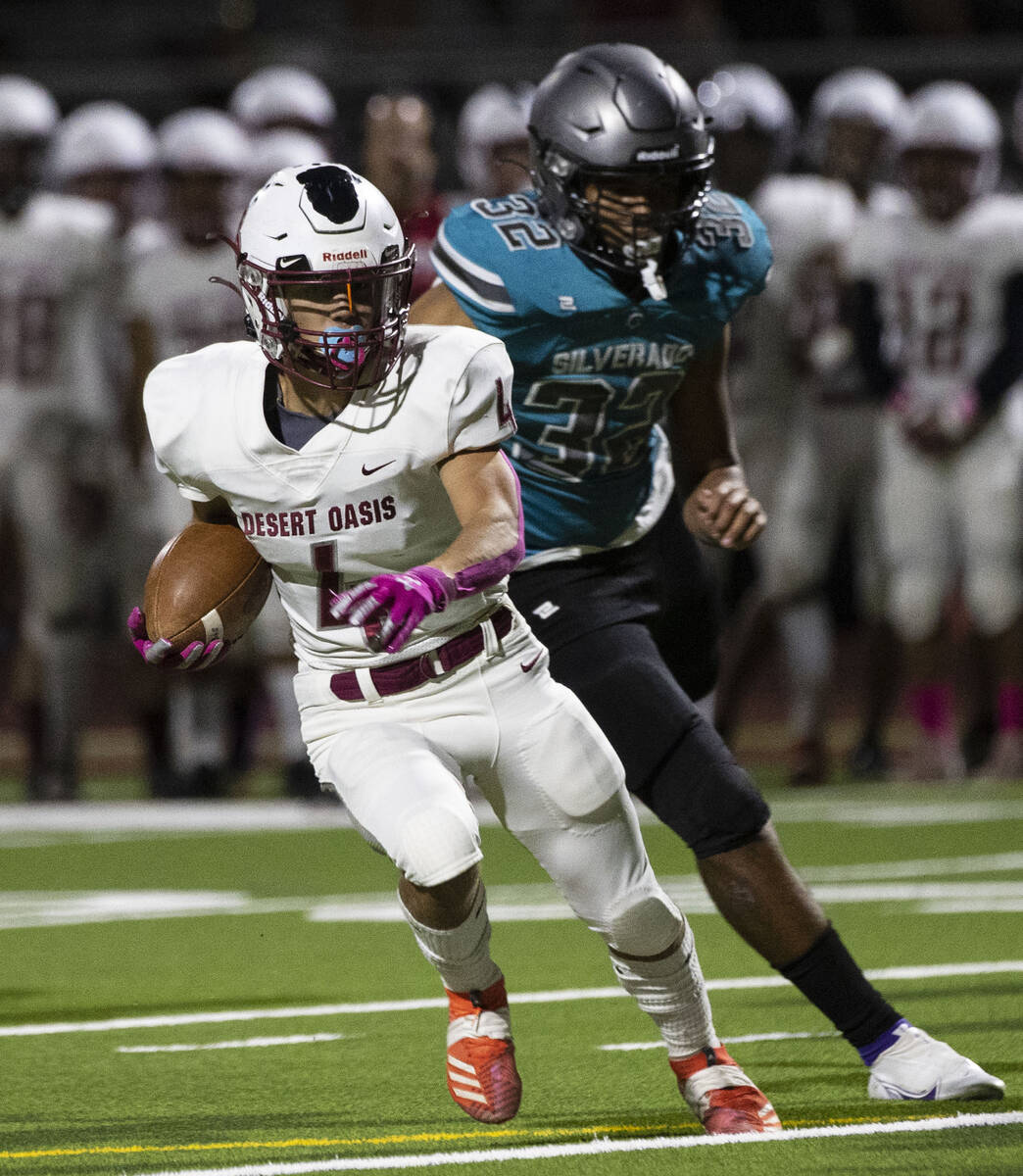 Desert Oasis wide receiver Isaiah Flasher (4) runs with the ball during the first half of a football game against Silverado High at Silverado High School, on Friday, Oct. 22, 2021, in Las Vegas. (Bizuayehu Tesfaye/Las Vegas Review-Journal) @bizutesfaye 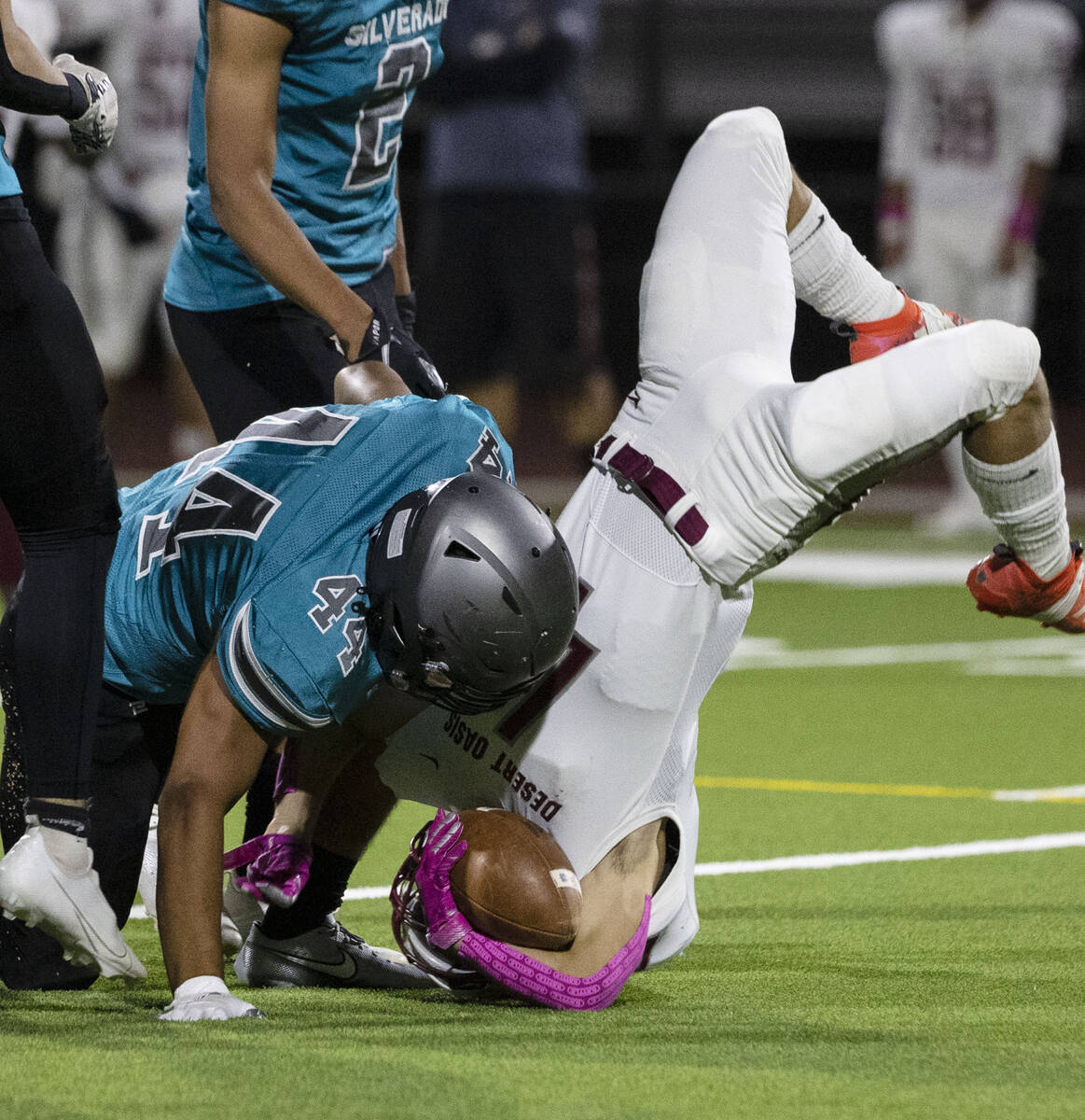 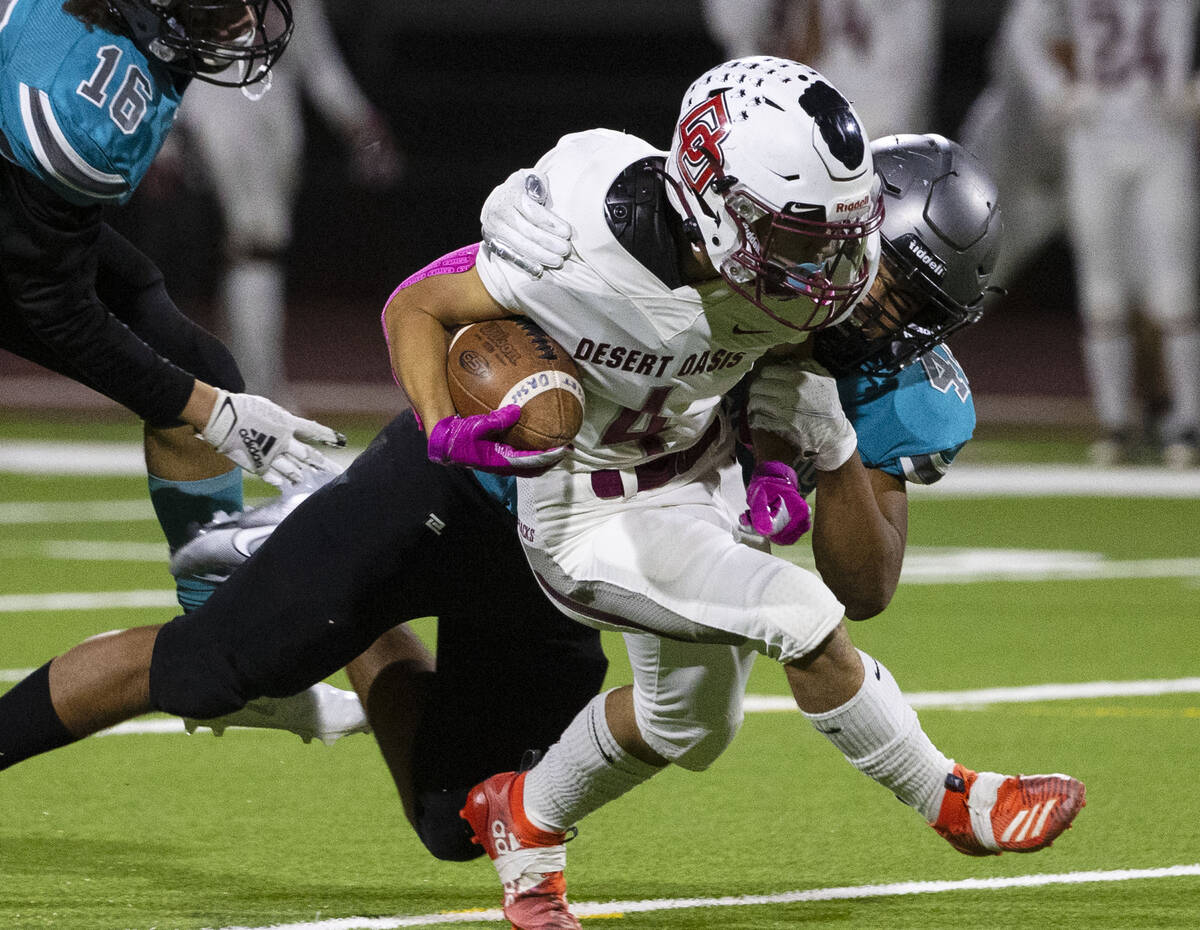 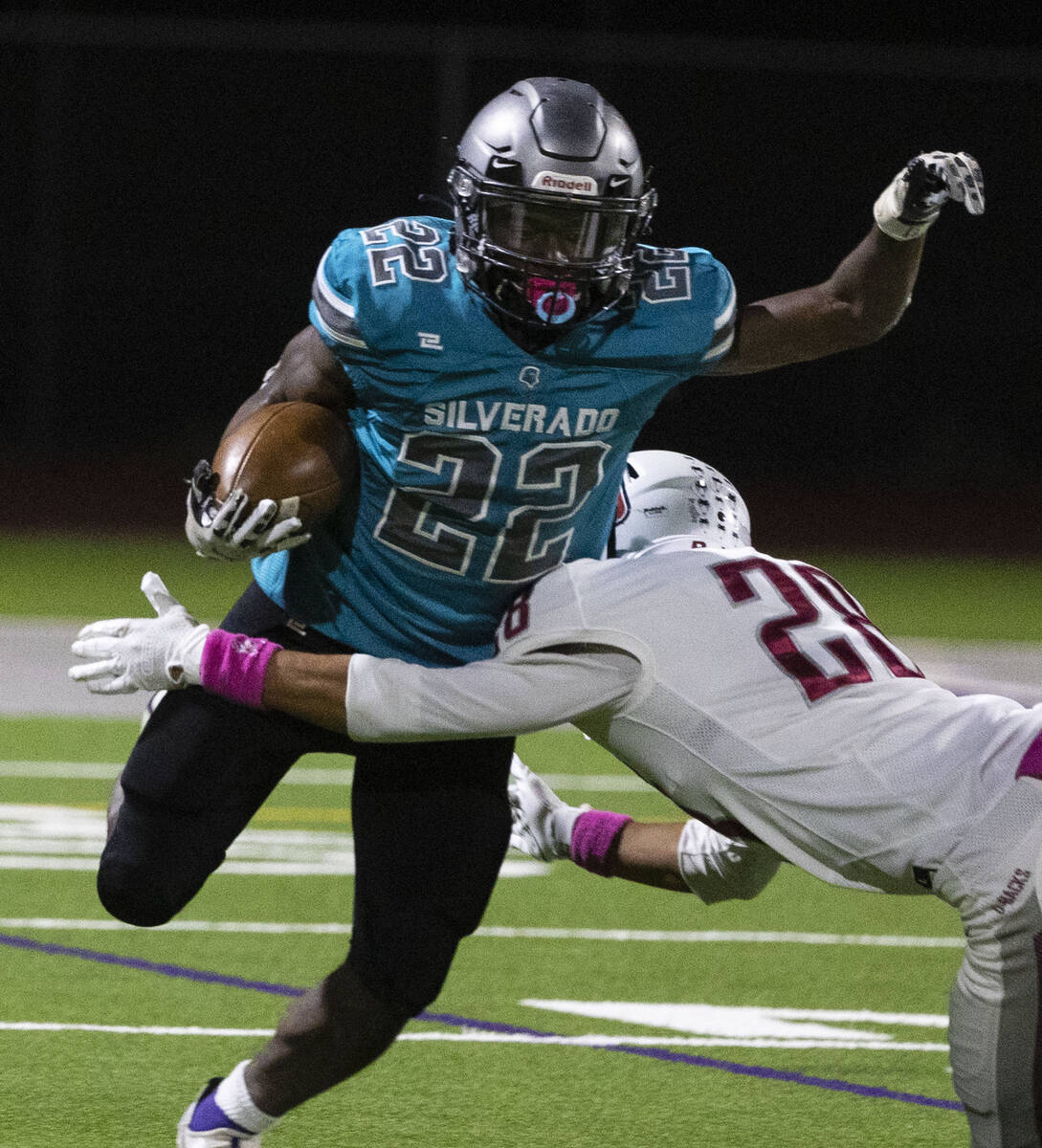 A few days before Desert Oasis was to meet Silverado for the 4A Desert League championship, Diamondbacks coach Brant Smith thought the passing arm of Tyler Stott might give the visitors a “puncher’s chance” against the undefeated Skyhawks.

Turns out the home team has a cast iron jaw.

Caden Harris rushed for 242 yards on 13 carries and scored three touchdowns, Donavyn Pellot scored five TDs and Silverado found the end zone every time it had the ball in a resounding 76-20 victory.

Stott, who entered the game ranked seventh in the nation with 2,991 passing yards, completed 21 of 45 passes for 274 yards and two TDs in the first half. While he briefly kept Silverado on its toes, it wasn’t nearly enough against a staunch side that improved to 9-0 and a 5-0 in earning its first league title since 2007.

“A lot is said about offenses, (Desert Oasis) obviously having a big passing game,” Silverado coach Andy Ostolaza said. “But what’s not said a lot about us — because we have been scoring so many points — is we play great defense. We have the whole year, and I think it showed again tonight.”

The versatile Pellot scored on 52-yard punt and 34-yard fumble return. John Agounke added two scores, including a 100-yard interception of a Stott pass on the final play of the first half that increased Silverado’s lead to 54-13 and activated the running clock for the entire second half.

The Skyhawks outscored their league opponents 315-38, and Ostolaza said it was nice to see the defense rise to the occasion again against their overmatched but closest Desert League pursuers.

“One of our coaches said those were our eighth and nine touchdowns on defense this year. We’re pretty good against the run or pass,” he said.

“The big thing tonight was we secure the win, we get the week off with the (playoff) bye. Now the real season starts. Everybody’s back to 0-0, and we’re going to see some teams we played earlier in the year — Shadow Ridge and Coronado being two of the big ones.”

Desert Oasis (7-2, 4-1) also had clinched a playoff berth before Friday’s game, and although the 20 points the Diamondbacks scored were more than Silverado had allowed its other league opponents combined, Smith said that was not much of a consolation prize.

“We had mental errors that led to big plays. It happens,” said the Desert Oasis coach, who thought his team would have to play perfect football and also catch a few breaks to have even an outside shot at an upset.

“There’s no sense in hanging onto this. Fix the mistakes that are fixable and just move on.”