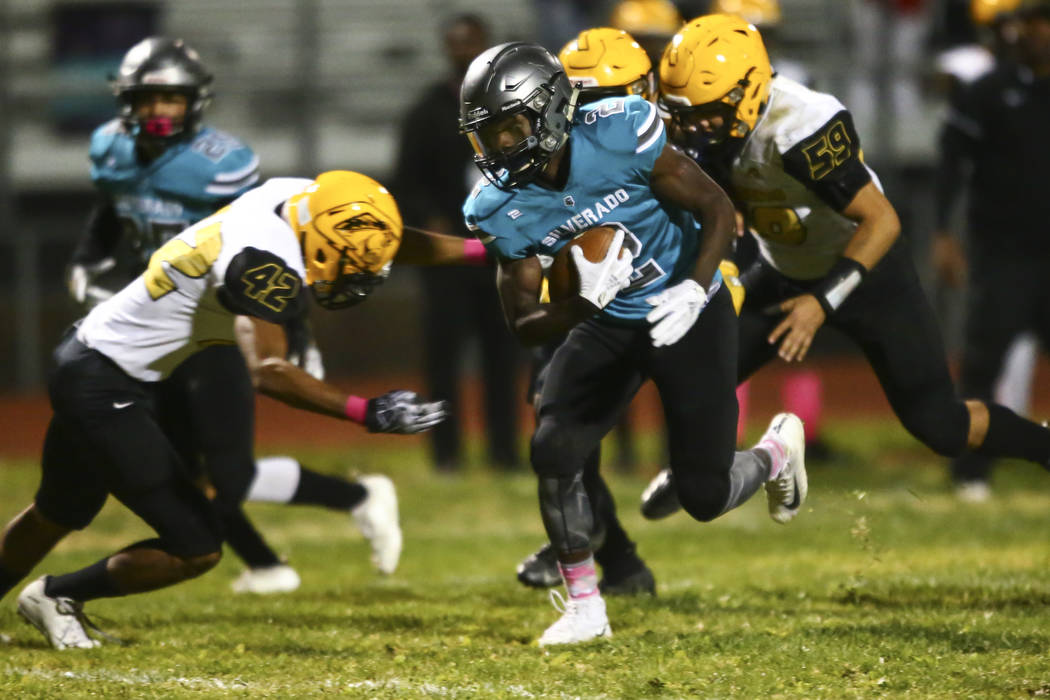 Silverado's Aginae Cunningham (2) runs the ball against Clark during the first half of a football game at Silverado High School in Las Vegas on Friday, Oct. 18, 2019. (Chase Stevens/Las Vegas Review-Journal) @csstevensphoto

The smile on Aginae Cunningham’s face said it all. The Silverado running back and valley’s leading rusher is ready for the playoffs.

But there’s an added level of excitement surrounding the Skyhawks this week. Their second-place finish in the Southwest League means they’ll host their first postseason game.

For Bishop Gorman and Liberty, the No. 1 seeds who will begin the 4A Desert Region playoffs this week, having a first-round playoff game is essentially a foregone conclusion before the season begins. In fact, Gorman coach Kenny Sanchez has never been part of an away game in the playoffs’ opening week.

Liberty has hosted at least the first two rounds in each of the past 10 seasons, but the Patriots don’t take it for granted.

“That’s one of the main goals we start with each season,” Liberty coach Rich Muraco said. “Make the playoffs, win the division and get home field for at least the first two rounds.”

For schools like Silverado and Green Valley, the No. 2 seeds in the Desert Region, hosting is a unique opportunity.

“It’s really special. It’s the first time anybody on this team has hosted a playoff game,” Silverado senior fullback Jacob Mendez said. “It’s pretty big, and we’re all amped up for it.”

This is the first time since 2015 that Silverado has done it. This year’s senior class was in eighth grade and the Skyhawks were being coached by former NFL quarterback Randall Cunningham the last time it happened.

The wait hasn’t been as long for Green Valley. It had a home playoff game two years ago, but only a handful of this year’s players were on the varsity roster then.

”It’s the first time I get to play at home in a playoff game,” Green Valley senior linebacker Jacob Fedarko said.

It was a long road to get to this point for Silverado and Green Valley.

The Skyhawks were down to “about 22 players” last season, Mendez said. But he felt a different vibe around the team in practice before this year started. Numbers were better, but with four freshman starters — including quarterback Brandon Tunnell — and several sophomores either starting or receiving playing time, they had a lot to learn.

Mendez said he could tell some of the young players were scared early in the season. That changed after the Skyhawks’ second game, a 39-28 loss to a fast and talented Las Vegas team.

“We knew we weren’t going to see speed like that again until we got to Gorman,” Silverado coach Andy Ostolaza said. “So that helped those kids understand, ‘OK, this is the pace of the game. This is how it’s going to go.’ Going forward, they matured a lot faster than we thought they would.”

Having Cunningham in the backfield has helped take the burden off the young players. The junior has rushed for 1,724 yards and scored 20 touchdowns, helping the Skyhawks average 46 points per game in their seven wins. The only game Cunningham hasn’t cracked the 100-yard mark was against Gorman, when he had 1 yard on four carries in a 62-0 loss.

The issue at Green Valley wasn’t maturity or experience — it was health. Quarterback Garrett Castro and a few other starters missed time, and the Gators were treading water at 3-4 after a 59-0 loss to Liberty.

“I give our guys a lot of credit,” Green Valley coach Brian Castro said. “Even when we had the injuries, the guys played in a lot of close games. We were right there, but we didn’t get it done. But the kids stayed with it. They kept coming to work every day.”

An offense that had sputtered came to life when Garrett Castro threw four touchdown passes in a 50-27 win over Chaparral.

Then came the game Green Valley will long remember. The Gators trailed Foothill by eight late in the game, when Christopher Lyons returned a fumble for a touchdown. Green Valley still needed a two-point conversion and got it on a pass from Castro to Ricci Patillo.

After an exchange of field goals in the first overtime, Stetler Harms blocked a Foothill extra point in the second extra session. That set up the Gators with a chance to win, and they did 24-23 when Hector Barrios made the extra point after a 10-yard pass touchdown from Castro to Carlen Wallace.

That game gave the Gators the No. 2 seed and the chance to host.