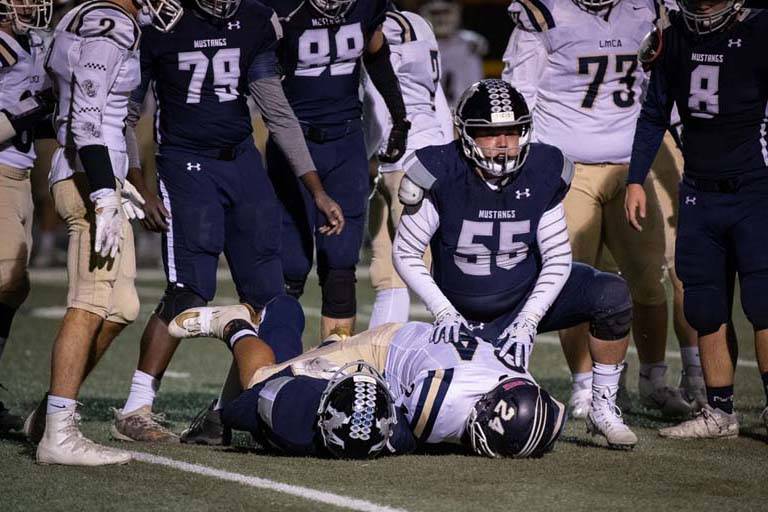 The Meadows' Blake Collier (55) gets up from a tackle against Lake Mead. He is one of three seniors that has helped the Mustangs to a 2-1 record going into Friday's game against Lincoln County. (The Meadows football photo) 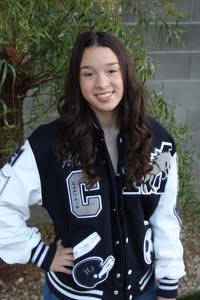 Allison Steward was 3-for-3 on extra points, including the game-winner in The Meadows' 21-20 win over Calvary Chapel two weeks ago. She is one of three seniors at The Meadows, which is 2-1 heading into Friday's game against Lincoln County. (The Meadows football photo) 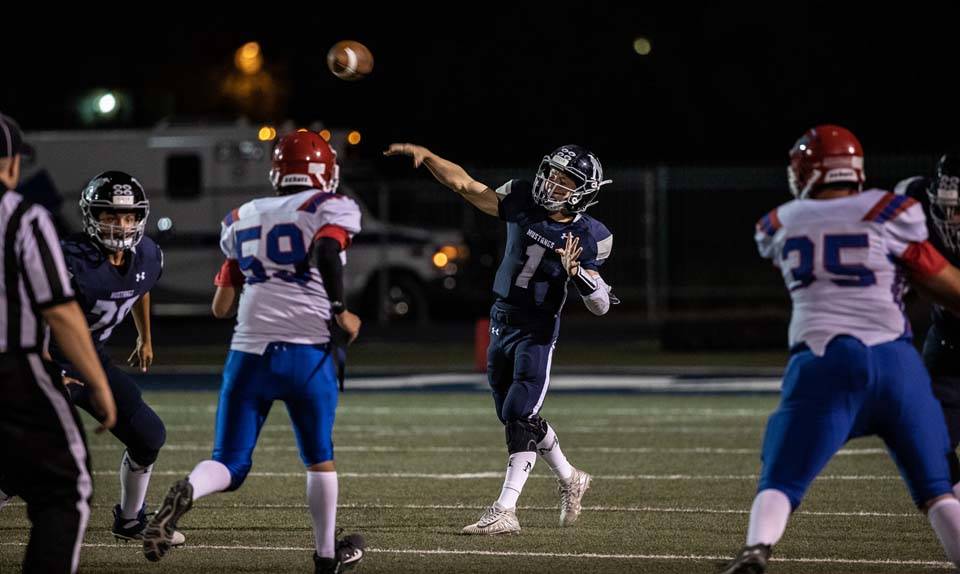 For many of the teams playing football this spring in Southern Nevada, the season is viewed more as extended practice time with a few games than an actual season.

But the games still count, and situations pop up that can only be experienced in that atmosphere.

The Meadows found itself in one two weeks ago, when it got a 1-yard touchdown run from Dawson Levine late in the fourth quarter and Allison Steward made her third extra point as the Mustangs pulled out a 21-20 win over Calvary Chapel.

“That particular game galvanized us. You have to battle back, and learning to not give up is something that has to come from within,” The Meadows coach Jack Concannon said. “You can’t get that in any other environment. You can’t go to the park in the middle of summer and create that.”

While Class 2A The Meadows, a young team with three seniors, will certainly remember that moment as a highlight, the spring has been a mixed bag for some of the smaller schools in Southern Nevada.

Pahranagat Valley, which is coming off a 1A state championship in 2019, has played only one game. The Panthers beat Mineral County 54-0 on March 5, meaning they will have had almost a month off when they meet Tonopah on Friday.

They were scheduled to play Beaver Dam during that time, but the Diamondbacks had too many injuries to field a team.

Pahranagat Valley coach Brett Hansen said the layoff has been frustrating but that the team has made the most of the time on the practice field.

“We scheduled a pseudo-homecoming,” Hansen said. “The school had homecoming activities, at least what we could do. We already had a volleyball game scheduled, so we played a blue and gold game. We split up the team as far as we could make it and played each other. That was actually pretty cool.”

Hansen said part of what made the intrasquad game so fun was the Panthers had “brothers against brothers and cousins against cousins.”

Lincoln County coach Devin Sonnenberg hasn’t been immune to the issues the spring season has brought.

On the field, the Lynx have won both of their games, but Sonnenberg said they are down in numbers after some players opted out of playing to get jobs. He also has seen an increase in injuries over a normal year, likely because of a lack of conditioning coming off the coronavirus pandemic.

Last Friday, Sonnenberg was headed to Utah to pick up some last-minute items before meeting with the team for a trip to Las Vegas to meet Calvary Chapel when he found out the game had been canceled.

Calvary Chapel had only one positive test, but contact tracing resulting from a film session left it without enough players.

“I have a Facebook group for the team and parents and a group chat with the guys and told them what was happening,” Sonnenberg said. “You could feel the wind go out of their sails.”

The Meadows and Lincoln County are on spring break this week, another factor teams aren’t used to dealing with.

But no matter how many issues the teams have faced in the short spring season, it’s unanimous among coaches that it has been beneficial.

“The players have done a good job of understanding the situation they’re in,” Concannon said. “One of the beautiful things about coaching at The Meadows is the kids are pretty smart. It’s been a great experience, and we appreciate all the people that fought for us to get on the field. So many people, every step of the way, have been hard at work so we can have a chance to play.”