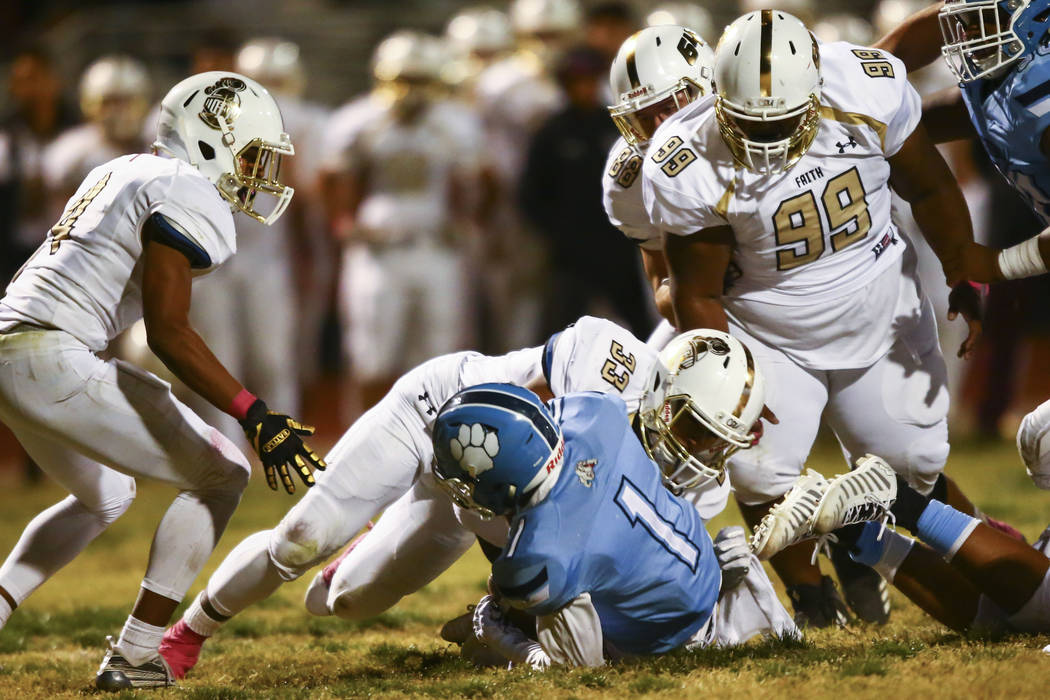 Faith Lutheran (3-3, 2-0 Northwest League) went on the road and handed Centennial its first loss last week. The Crusaders now hope to take firm control of the Northwest League race. Arbor View (5-2, 2-1) is trying to extend its streak of Northwest titles to six years. A league-opening loss to Centennial put the Aggies’ chances in jeopardy, but they’re still intact thanks to coming back last week from a 20-7 deficit to Cimarron-Memorial in the fourth quarter for a 26-20 win.

Order has been restored at Liberty, with wins over Chaparral and Green Valley to start the Southeast League, winning by a combined total of 106-3. QB Daniel Britt has been almost perfect in those two games, hitting 17 of his 19 passes for 399 yards and four touchdowns for the Patriots (2-5, 2-2). He’ll have to deal with the pass rush of Foothill’s Tofa Wilson, who had five sacks last week to run his valley-leading total to 15 . The Falcons (6-1, 2-0) are allowing only 13.4 points per game.

Two teams with playoff aspirations meet in this Southwest League game. Silverado would clinch a spot with a win, while Clark would be on the verge if it comes out on top. Silverado (5-2, 3-1) is paced by sophomore running back Aginae Cunningham, the valley’s leading rusher with 1,202 yards and 12 touchdowns on 131 carries. Clark (5-2, 2-1) is hungry to get back in the win column and coming off a bye week after having its five-game winning streak ended by Durango.

Centennial’s undefeated run to start the season came to a halt against Faith Lutheran last week, but the Bulldogs (5-1, 1-1) still have Northwest League championship hopes. Shadow Ridge (3-3, 2-1) is playing for its playoff life each of the next three weeks, with a road trip to Faith Lutheran and a home game against Arbor View to follow this week’s game.

The winner of this game takes a giant step toward reaching the postseason. Green Valley (3-4, 1-1 Southeast League) lost 59-0 to Liberty last week, but its defense had allowed less than 15 points per game before that. Chaparral (5-2, 1-1) didn’t find the end zone in either of its two league games, but it made two field goals in the final three minutes last week to beat Basic 6-3 and stay in the playoff chase.