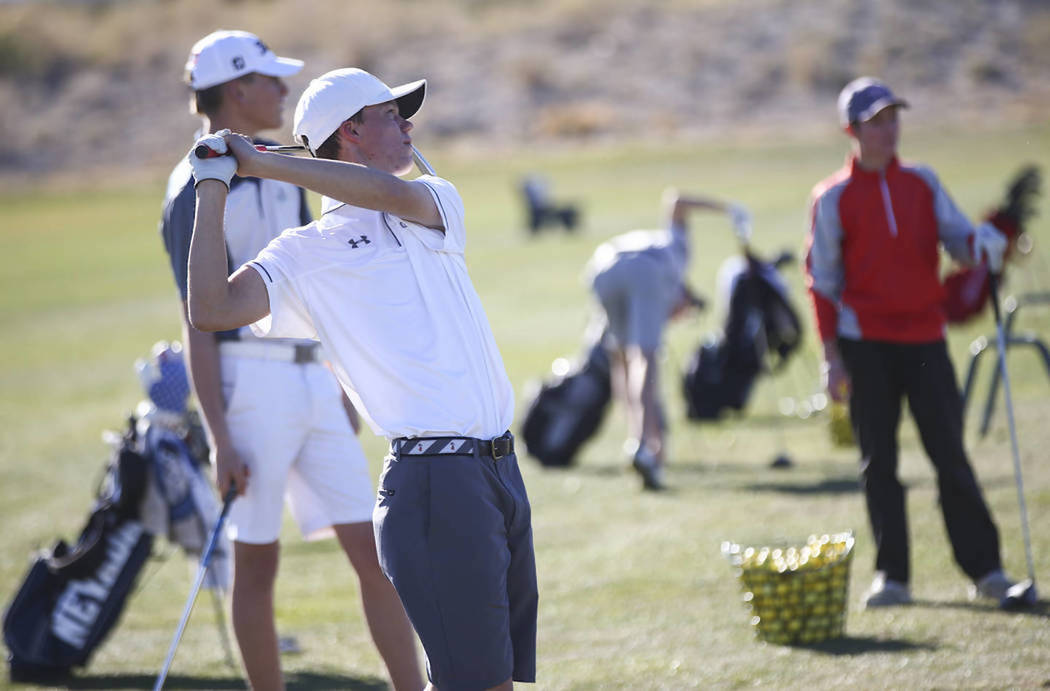 Outlook: Newman, a first-team all-state honoree, finished in a tie for second place at both the Class 4A state and Sunset Region tournaments last year.

He will lead a team that hopes to improve throughout the season.

Outlook: Lipschultz is the lone returning letterman on a team that hopes to continue building.

“We have an outstanding leader in Miles Lipschultz, who is a three-time letter winner in our program,” Coy said. “We also have a motivated freshman, Evert Peters, already shooting in the mid-80s and has some exciting 300-yard-plus drives. These two expect to make regionals this year, and make a name for themselves.

“Our program is consistently improving, and we are excited to see what becomes of this season.”

“We graduated two key seniors in 2018, but are left with a very talented, young team with plenty of upward potential,” Stanfill said. “Junior Skyler Ngo is set to have his best season of his career. Hard-working sophomore Leo Torres has been significantly upping his game, having great success in the offseason, and should challenge for the top spot.”

Outlook: Thompson tied for seventh in the Class 4A state tournament last year and leads a group of four returnees for the Bulldogs.

“Centennial is looking to improve on last year’s fourth-place finish in the tough Northwest League,” Hartsock said. “Cole had a strong finish last year at the state tournament and is looking to build upon that success.

“Centennial returns four letter winners and looks to build upon that experience.”

Outlook: The Cowboys bring back three golfers, including two who lettered, last season.

“We are adding a few other new golfers,” Brody said. “We will focus on fundamentals, tempo, swing, and building for the future.”

Outlook: It’s a building year for the Spartans, who hope to improve each time out.

“This season I have a brand new team with limited experience,” Fields said. “My goal this season is to develop players and hopefully get a full team score and compete as a team in our league matches. I am working on building my team for the future.”

Sarro was sixth, and Sodetz and Ben Sawaia tied for seventh in the state tournament.

If everyone stays healthy, the Cougars should be among the top teams in the state again this season.

Outlook: Greer twice has qualified for the state tournament and returns to lead a group of four lettermen.

“We expect our team to enjoy the game of golf while learning to compete and encourage them to become life-long golfers and ambassadors for the sport,” Chrysler said.

Outlook: Blake was a state tournament qualifier last year and leads a group of three returning lettermen for the Diamondbacks.

Outlook: The addition of two freshmen gives the Jaguars a chance to compete as a team. The squad hopes to improve throughout the year.

Outlook: The Trailblazers have only one returning letterman and are focused on individual improvement.

“We hope to have an individual qualify for the state tournament,” Mausbach said.

Outlook: Manganello, a Fresno State signee, is one of two returnees for the Sundevils.

“This looks to be a very exciting year for Eldorado golf,” Yacubovich . “Matthew is very excited to return for his last season and make a run at a state championship. Jerom Lee is also returning for his second and last season as a Sundevil.

“We have two other golfers, Christian Dye and Ramon Zambrano, who are underclassmen and new to the sport. Our senior Sundeveils plan to carry the team and help the future of our program while leading by example.”

Outlook: Goldstein was the runner-up in last year’s Class 4A state tournament. He averaged 72.8 strokes per round and joins Smerz (75.8 average) among a group of six returning lettermen for the Crusaders.

Olkowski, who placed third in Colorado’s Class 5A state tournament last year, is a big addition.

“With six returners and the addition of Canon Olkowski, the Crusaders look to have a very competitive team,” Cheney said. “We are committed to continuous improvement and competing for a state title.”

Outlook: MacFawn finished fourth in last year’s Class 4A Sunrise Region tournament. The Falcons were the team runner-up in the Sunrise last year and bring back six lettermen.

“We hope to grow as a team, work hard and qualify for regional and state championships,” DeSantis said.

Outlook: Jensen, who averaged 77.6 strokes per 18 holes last season, leads a group of five returning lettermen for the Wildcats.

“Our team hopes to improve on last year’s averages and become more competitive as a whole,” Ford said. “We have been working on building a strong foundation, emphasizing work ethic and camaraderie amongst the players and coach.

“We have high expectations for every player to shave strokes off of their average from last year while competing to win our region and send players to the state tournament.”

Outlook: The Longhorns have just one returnee and are hoping to get better each day.

“We have beginners looking to improve,” Thornton said.

Outlook: Ozaki takes over a team that returns four lettermen and hopes to be competitive in the Class 3A Southern Region.

Outlook: The Rattlers return two lettermen in Webb and Diaz, who improved throughout last season.

The program lost its best player (Marcus Mullins), so we are rebuilding the program,” Raso said. “The goal is to have the two returning players continue to make progress with hopes of making it to regionals this year.

Outlook: Salerno and Cooper were Class 4A state tournament qualifiers last year and lead a group of six returnees for the Panthers.

“With all six players returning, the Panthers hope to qualify for state as a team,” Steffenhagen said.

Outlook: The Mountain Lions bring back three lettermen and hope to be competitive.

“Rashon and Harrison are my two top golfers,” Mangione said. “Tae has been playing since his freshman year and has steadly improved every year. Preston is new to our team this year and is continuing to work on his game.”

“We look to be competitive in a new division, and always hope to send some to regionals and state,” Lundblad said.

Outlook: LeBlue qualified for last year’s Sunset Region meet and is back to lead a group that hopes to build in numbers before their first match.

“We are going to struggle to field a full team, but both Adonis and Cormack should have a good chance at qualifying for state and earning some sort of conference and or league honors,” Backman said.

Outlook: The Roadrunners bring back four lettermen as they make their return to Class 4A.

“We have a very young team, but with four returning lettermen,” David Shelton said. “Three new freshman faces turned out this year with some talent to hopefully push the older kids.

“We look to keep getting better and are going try to make our mark in this new league.”

Outlook: Waite said the Bulldogs are hoping to improve this season.

Outlook: Smith is the defending Class 3A state champion and leads a group of four returnees for the Warriors.

“We’re looking to see if Jared Smith can win back-to-back state titles,” Bohen said. “Patrick Tasanaroungrong has shaved several strokes off his game and should be a regional, and hopefully state, qualifier.”